“Wow, Mummy! They’re amazing,” was my nearly-four-year-old’s response when he saw The Great Brick Safari this morning.

And he’s right; wow indeed! The 12 statues which are currently on display in Mermaid Quay are incredible. In Cardiff for just two weeks – from Saturday 10th-Sunday 25th February – the wild animals took a total of 4,024 hours to build and are made up of more than 600,000 bricks. 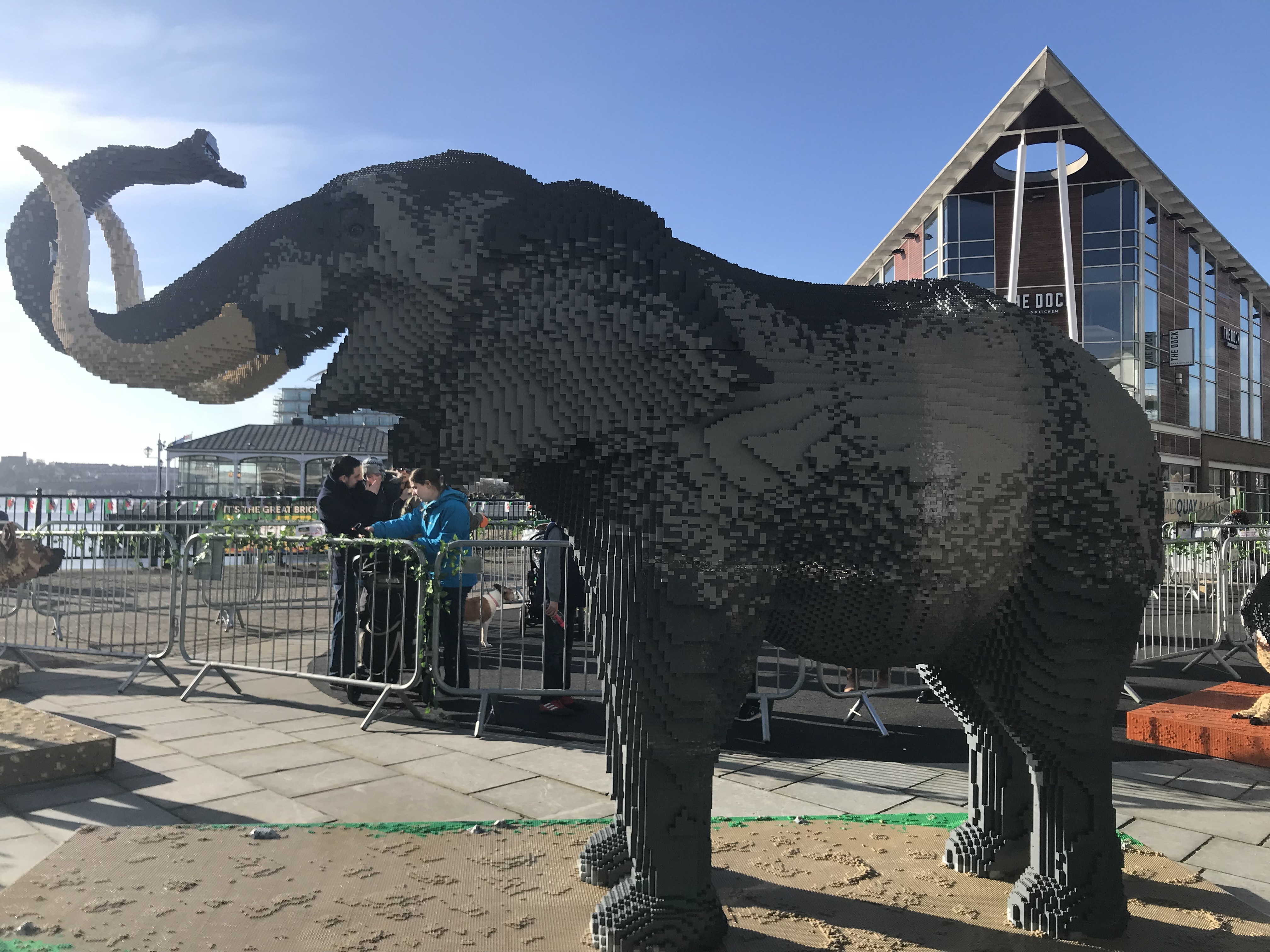 Littlest excitedly ran from one animal to another, saying “wow” at each one. Up close, the Lego building skill is awe-inspiring and you can’t help but marvel at the creativity and hard work which must have gone into each one. A baby joey sits in its mother kangaroo’s pouch; a mother zebra and her two foals look out across the Bay; the elephant stands at 2.5m tall with Littlest not even as big as its leg. 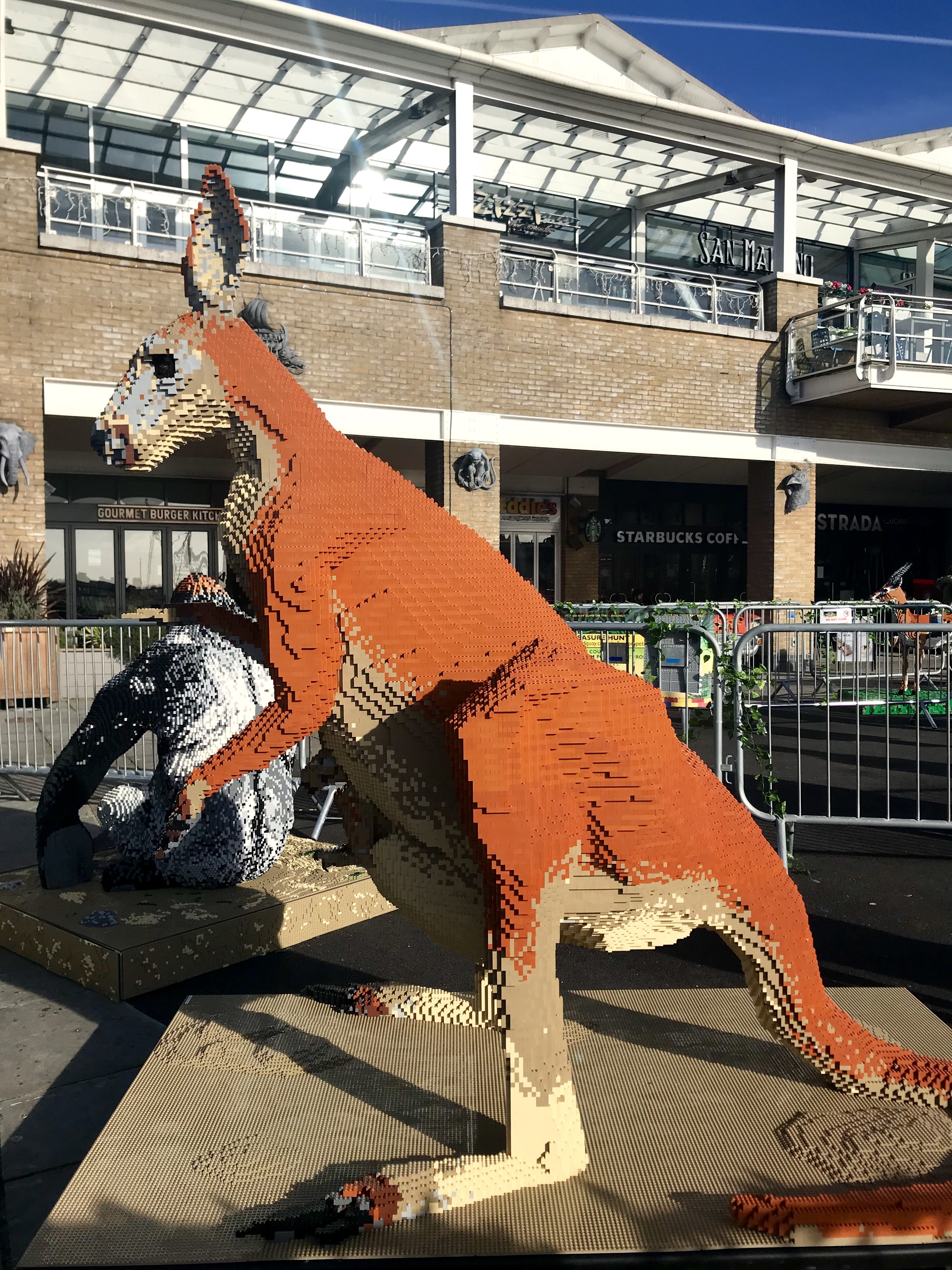 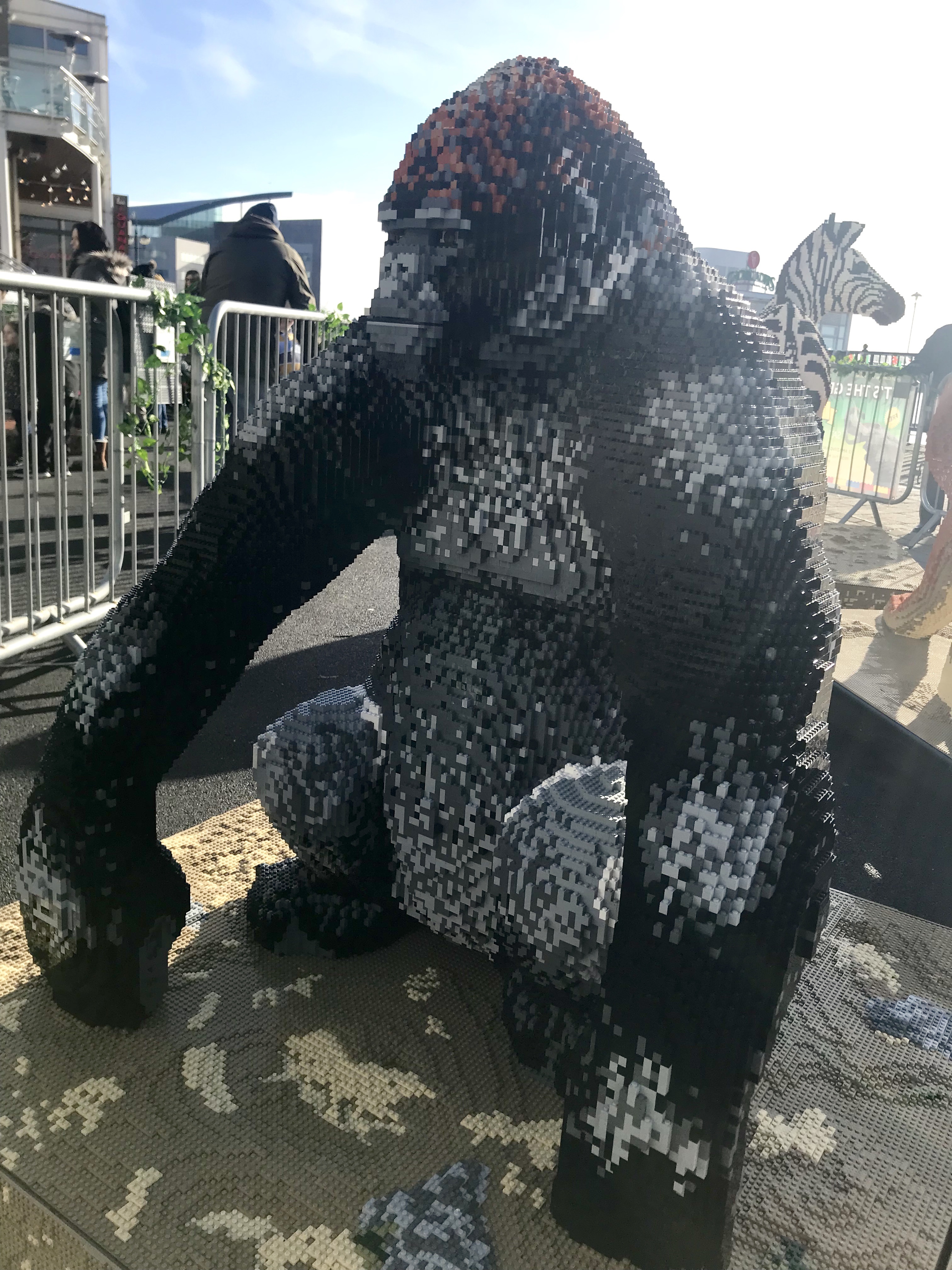 Each animal is accompanied by a poster detailing its name, how long it took to build and how many bricks were needed. Earl Grey the elephant is made up of 271,739 bricks and took 6 six builders a total of 1,600 hours to build. Gorman the gorilla is made of 33,000 bricks and took four builders a total of 480 hours to build. Other animals include a 3m long crocodile; a gazelle an ostrich and two hyenas and a lion. 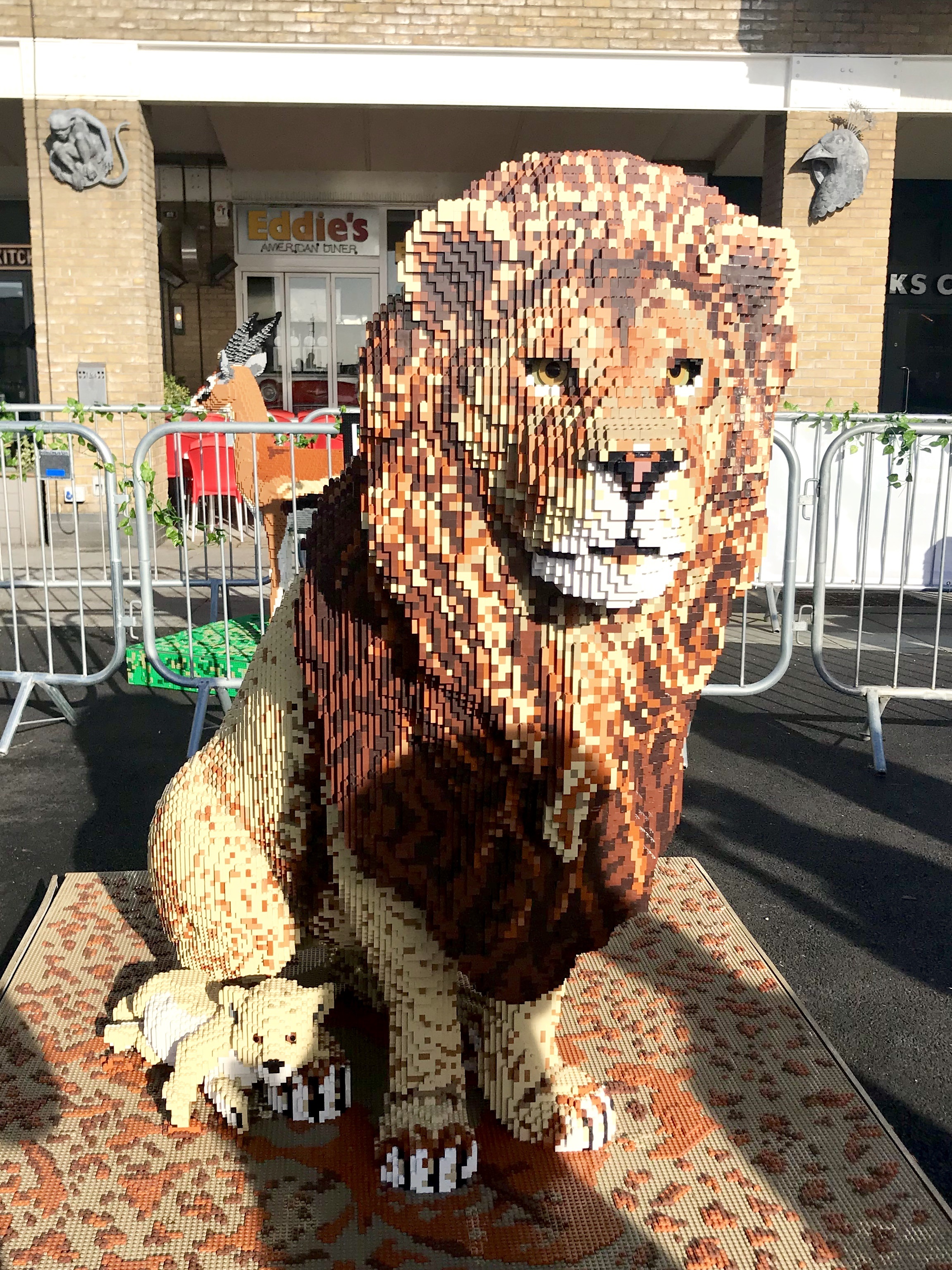 Free to visit and located on the site of the former Coffee Mania, The Great Brick Safari is created by Bright Bricks, an independent Lego building firm and its team of 30 Lego artists.

This is the first time the collection of animals has been on display Wales and only the second time in the UK.

This is Lego at its most inspiring with intricate brick work and such attention to detail that from a distance, and in some photos, the wild animals look like more like paintings than Lego creations. 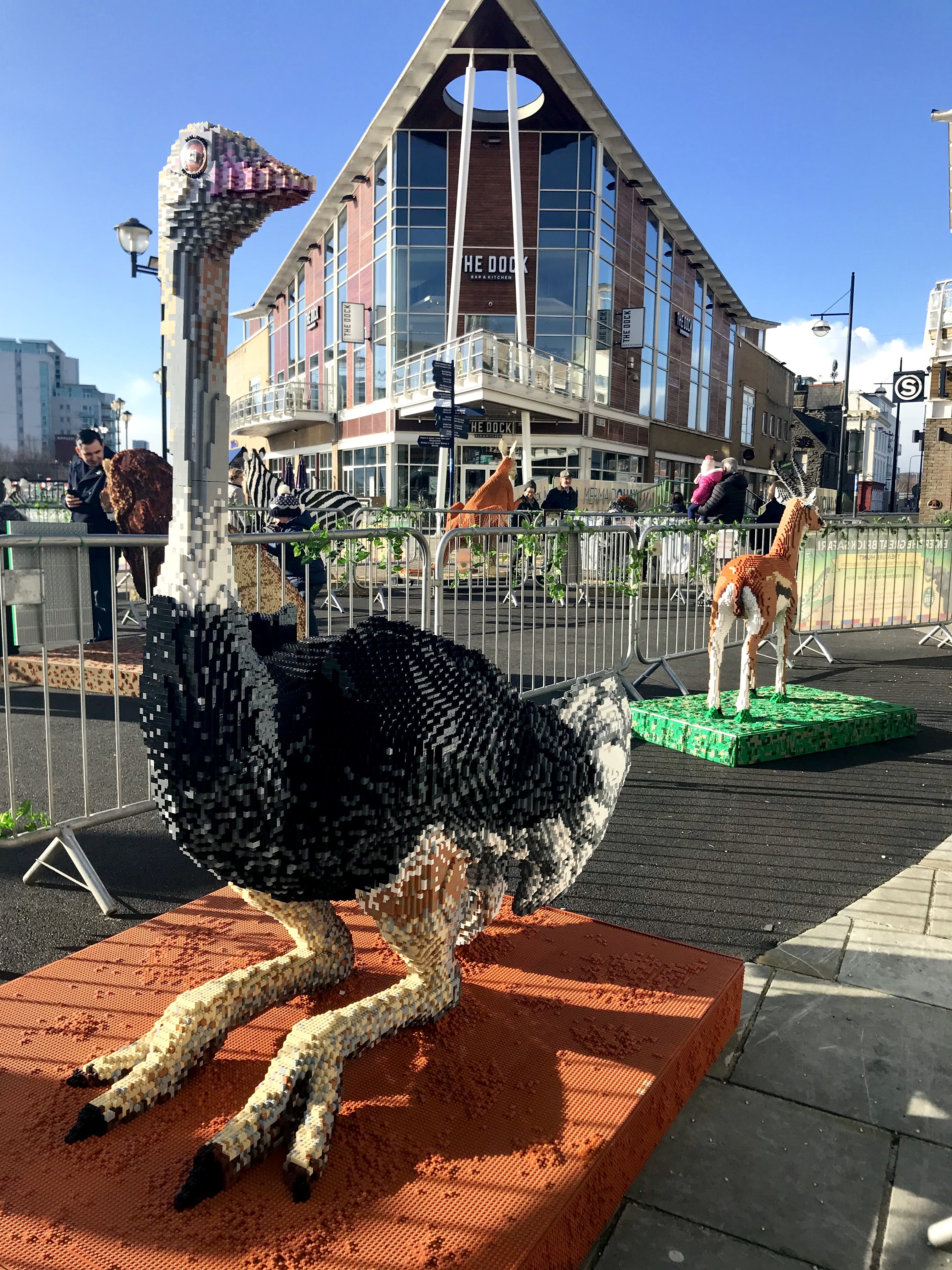 All of the wild animals are kept safely behind metal fences – other than Linus the lion, who is made from 65440 bricks and took four people a total of 400 hours to make. He sits in the middle of the enclosure with full access for visitors and is probably the most photographed creature in Cardiff this week judging by the amount of selfies I have seen on social media these last few days. Littlest loved the baby lion curled up asleep by his side. 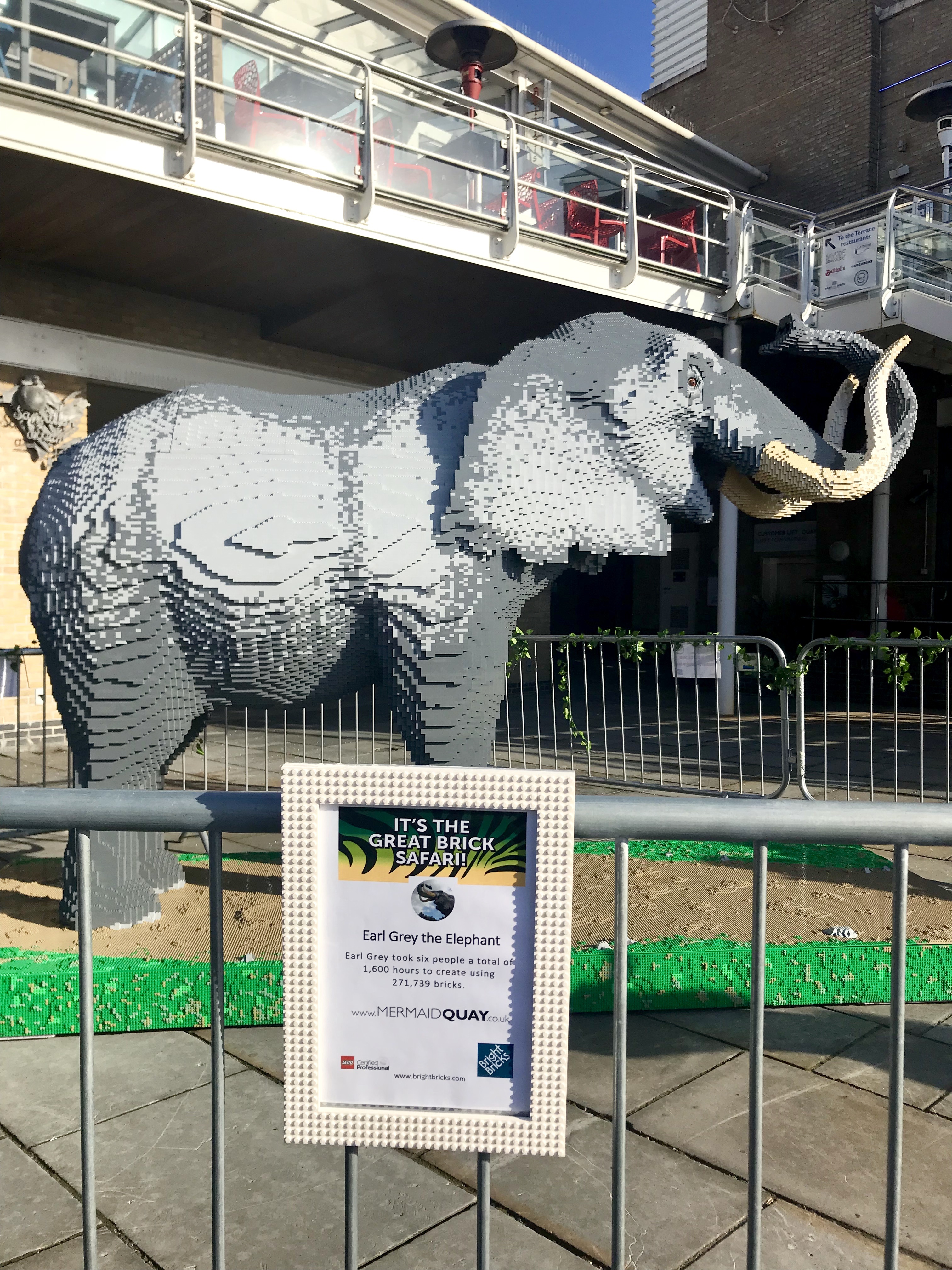 The attraction is naturally proving popular. We visited at 10.30am this morning and even then getting photos without loads of people in them was tricky. Go early is our advice, especially during half term and at weekends.

You only need 10-15 minutes or so to view the animals so it’s worth combining with a visit to one of Cardiff Bay’s other attractions such as Techniquest or the Red Dragon Centre or a walk across the barrage.

We’ll definitely be visiting again soon so that Miss E, Little Man and Cardiff Daddy can see the animals too. In the meantime, it’s inspired our own Lego creations and while they might not be a patch on the safari it’s great to see my children’s imaginations fired up.

The Lego Safari is at Tacoma Square in Mermaid Quay until Sunday 25 February. For more information visit the Mermaid Quay website.