Ah, Julia Donaldson! The queen of the bedtime story! I don’t know a single baby, toddler or pre-schooler whose bookshelf doesn’t contain at least one of her stories. We have about 20 of her books and they are all firm favourites, not to mention the 10 or so titles we’ve borrowed from the library. From Stick Man, The Highway Rat, Superworm and Room On The Broom, to Tyrannosaurus Drip, The Troll, The Paper Dolls and The Rhyming Rabbit, these are books that can be read night after night without losing any of their appeal.

Donaldson has perfected a winning combination of rhyming verse, with plenty of repetition that young children quickly pick up, lively characters, an element of magic or fantasy, and a touch of danger or evil where good always prevails. Wonderful illustrations from the likes of Axel Scheffler, David Roberts and Lydia Monks get better and better the more you look at them, as new and subtle details emerge on every reading.

Perhaps most famous for The Gruffalo – which has sold over 10 million copies worldwide – the former Children’s Laureate has written over 60 children’s books, as well as another 120 used in schools as educational reading tools. A whopping 40p of every pound spent on picture books goes on her titles! Three of her most famous books – The Gruffalo, The Gruffalo’s Child and Room On The Broom, all illustrated by Axel Scheffler – have been turned into short animated films. These modern-day children’s television classics are always one of our Christmas Day television highlights, as I am sure they are for millions of other families too.

Given their appeal, it’s unsurprising that several of Donaldson’s most popular stories have been adapted for the stage. Cardiff has played host in recent years to The Gruffalo (which has been here at least twice to my knowledge) and The Gruffalo’s Child. My children enjoyed them both so we had high expectations for What The Ladybird Heard, a touring production from Kenny Wax Ltd in association with Matthew Gregory. We weren’t disappointed. 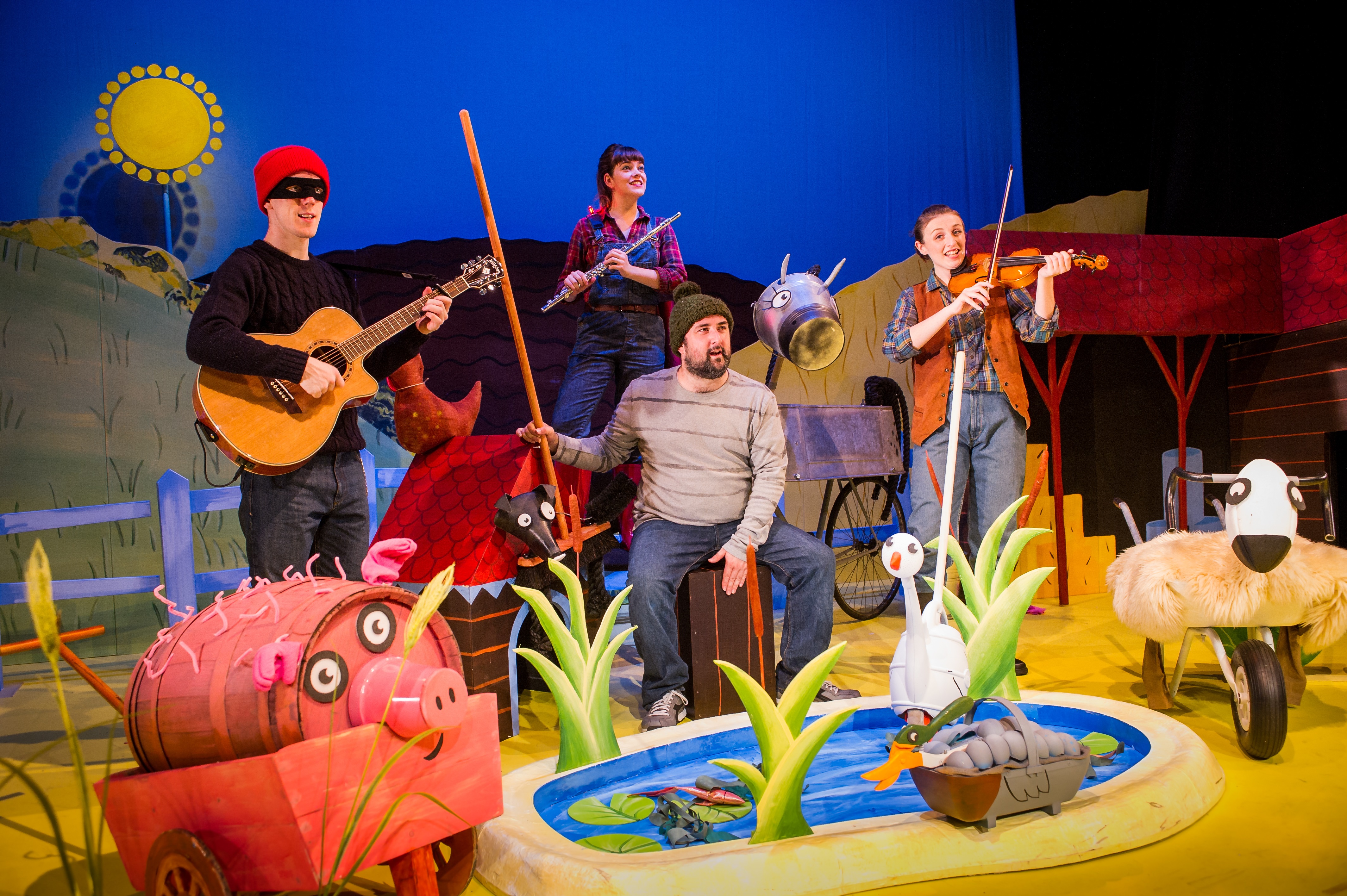 What The Ladybird Heard

I was intrigued to know how the production team would present a story featuring a cast of animals, not to mention how they would turn a book that takes 10 minutes to read at the most into an hour-long show. The Gruffalo and The Gruffalo’s Child saw actors taking the main roles of the mouse, fox, owl and snake, but rather than being dressed in obvious animal costumes, they were a lot more subtle. The owl became an old-fashioned pilot, for example, with Biggles-esque goggles and the fox was a wheeler-dealer character. A lot of young children I know found it confusing.

Here, however, the action takes place in a farmyard where the human farmers tell the story of how a quiet and unassuming ladybird foils two robbers in their attempt to steal a prize-winning cow. They do this via animals they have made from farmyard equipment and junk, and others which are painted onto the set. Creating these animals becomes part of the show itself and it works really well – my three-year-old thought the goose constructed out of a wheelbarrow and a fluffy rug was particularly clever and he loved the pig made from a wooden barrel.

As you would expect with a performance for young children, there is plenty of audience participation. There are animal noises to be made, catchy songs to join in with, and familiar elements of the original text to recite. It is great to see the cast of four – the ever-enthusiastic Rosamund Hine, Rachael Henley, Matt Bateman and Matt Jopling – playing instruments themselves, including the flute and guitar, and the songs, written by Jon Fiber and Andy Shaw, are so catchy that the youngsters are soon joining in and bobbing about in their seats.

The set looks like it could have jumped straight out of the book itself. The show’s producers worked with the story’s original illustrator Lydia Monks to create a backdrop of bright and lively farm buildings and animals, and this familiarity definitely helps fans of the book instantly relate to the production, despite the additional material and the story being told in a different way. The start of the show does presume some knowledge of the book, with the cast asking the children which animals they remember from the story – but other than this, you don’t have to be a fan of the book to enjoy it.

This is great entertainment for the youngest of theatre-goers. A combination of the action moving around the stage and at times into the auditorium, memorable songs, audience participation and a bright, lively set, keeps the attention of all the children sat around me – and given this was a performance during school hours, that means they were all under five. Three-year-old Little O sat still for the duration and despite my teething six-month old Baby I having a small grizzle and a nap mid-way through the show, even he was engrossed the rest of the time, stood up on my lap with his eyes fixated on the stage and a big grin on his face.

Little O was disappointed when it finished and didn’t want to go home. He couldn’t wait to tell Little E (his big sister who had been at school all day and was not impressed at missing out) and Cardiff Daddy all about it – and no prizes for guessing which story he chose to read before bed!

What The Ladybird Heard is at the New Theatre, Cardiff, until Saturday 20th September. Click here for more details, or contact the box office on 029 2087 8889.

DISCLAIMER: I attended this performance as part of my role as a freelance writer and theatre reviewer and was given press tickets for this performance. Another version of this review also appears on the Theatre Wales website.