The weekend sun couldn’t have appeared at a better time for us, with a two-night camping trip in the Gower.

We were there because a friend had invited us along for her 40th birthday celebrations – a total of 14 families, including 35 children ranging in age from one to 11 years old.

June’s weather had been so bad that we had been bracing ourselves for a wet and windy weekend. But then suddenly, from nowhere, came two days of glorious sunshine.

We spent all day Saturday at the beach, exploring caves and rockpools, bodyboarding and enjoying kids versus grown-ups games of football and cricket. Both evenings were spent barbecuing and dining al fresco. The adults chatted and listened to music as the children ran around playing – rolling down the hill in their sleeping bags was a real favourite activity, while the campsite’s football goals and the rope swing in the woodland were also popular. The kids toasted marshmallows on the firepit while the grown ups enjoyed damson gin, homemade by one of our party.

It was a weekend of proper free-range fun for all ages. 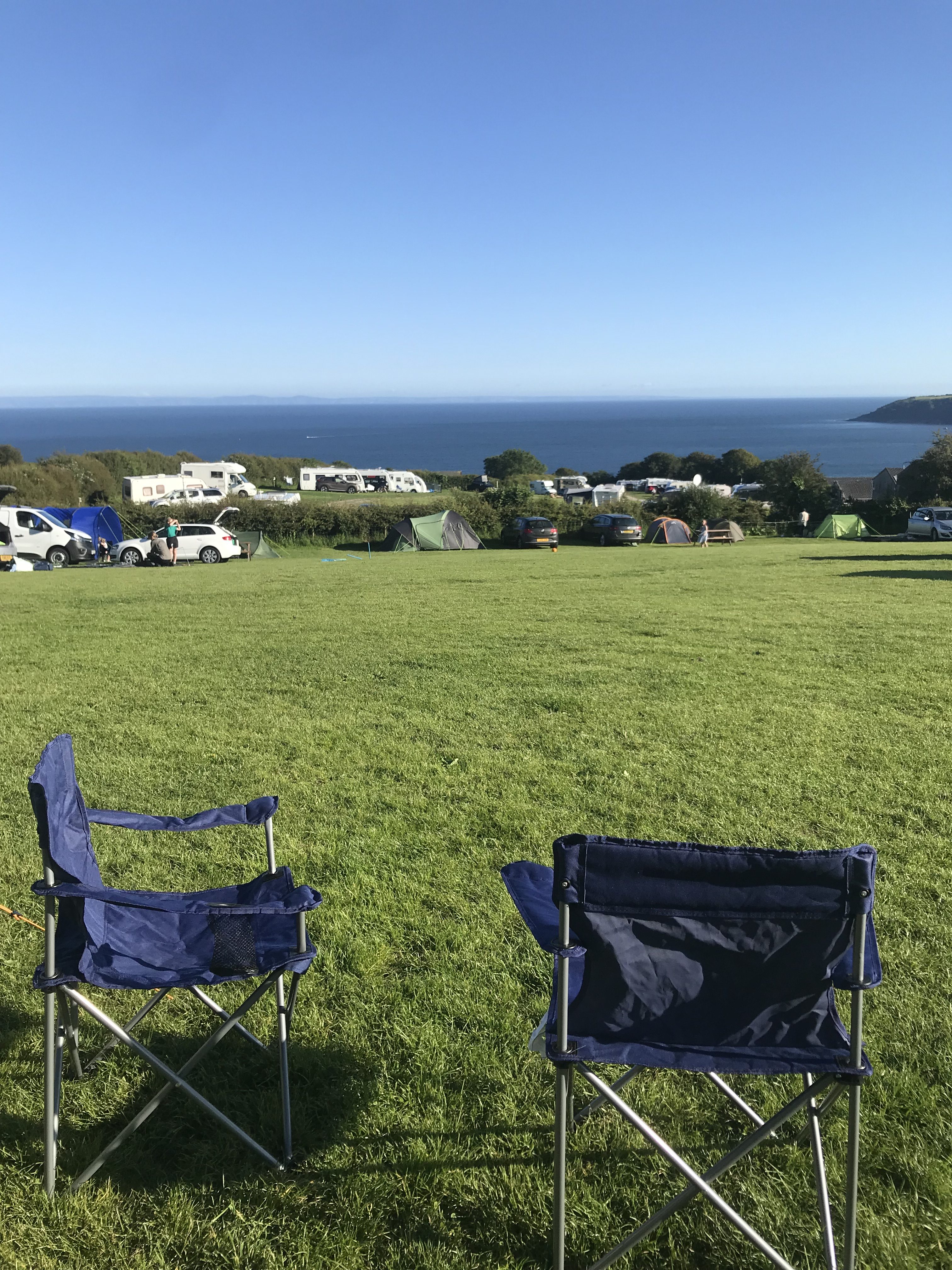 Nicholston Farm Camping and Caravan Site is a family-run site on a working farm, owned and operated by the Beynon family. Campers have been pitching up there since the 1920s, with pitches available for tents, caravans, motorhomes and campervans, as well as two new glamping pods for those who want more of a luxury experience.

The various families in our party arrived from around 6pm on the Friday, coming straight from school. We’d all booked in advance, and while we had all requested to stay in the same field, pitches are allocated on arrival on a first-come, first-served basis. With 14 families, we were dotted around in clusters although none of the pitches were especially far away from each other. As we set up our tents, the children ran around playing. It was great to see the older children looking out for the younger ones, and children of different ages playing together. 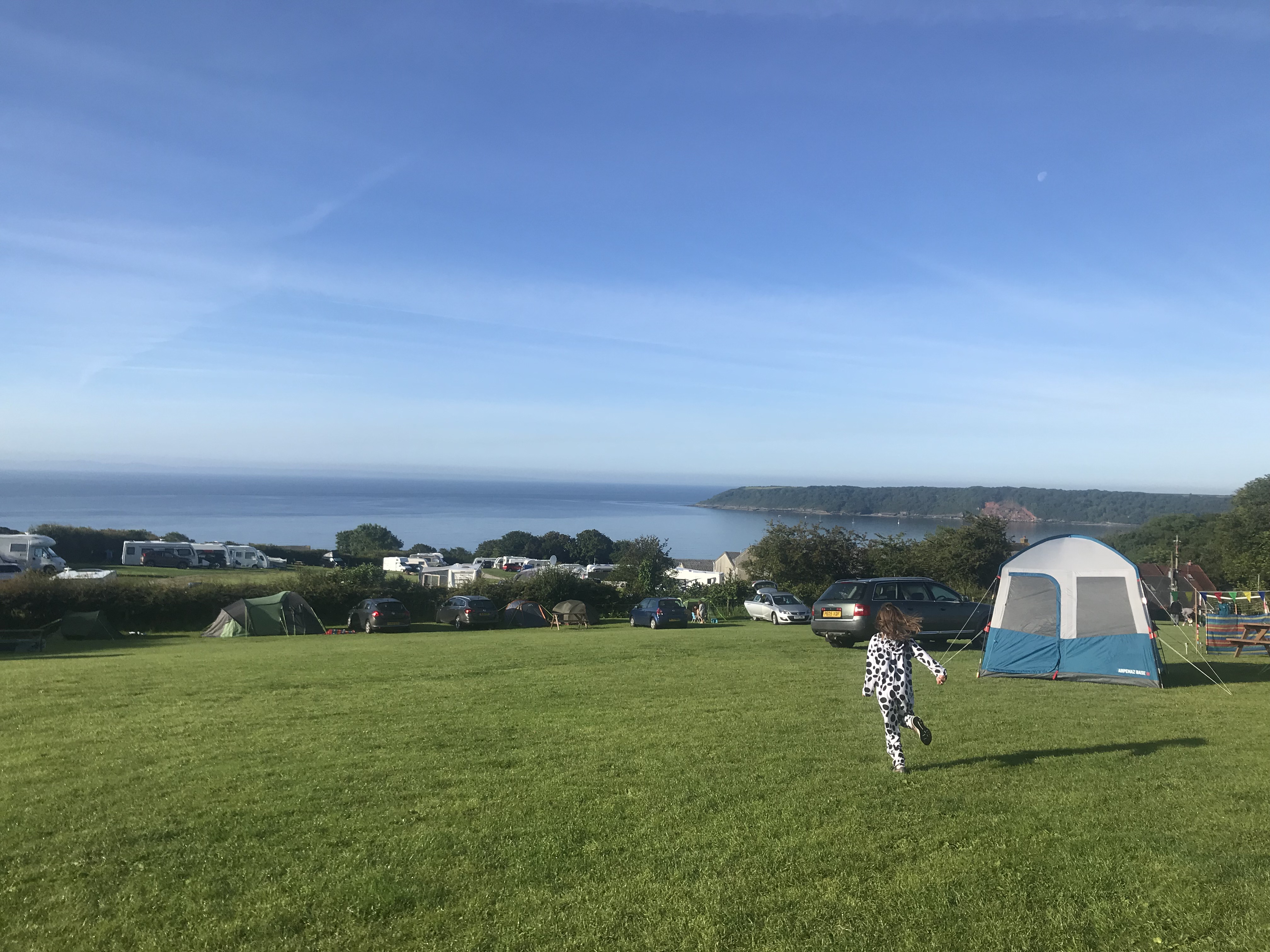 We’d decided to each organise our own meals and with hungry kids all round, this included a mixture of pizza ordered from Gower Pizza, who had a pop-up pizza oven on site that night; those who had bought easy-to-cook-on-a-camping-stove-meals such as pasta or curry and rice, and barbecue food. The kids followed this up by toasting marshmallows and squeezing them between chocolate biscuits to make S’mores.

The campsite has a noise curfew of 10.30pm, which was quite handy as the children were having so much fun running around outdoors with the sense of freedom and independence you just don’t get living in the city that it would have been tough to persuade them to go to bed otherwise. 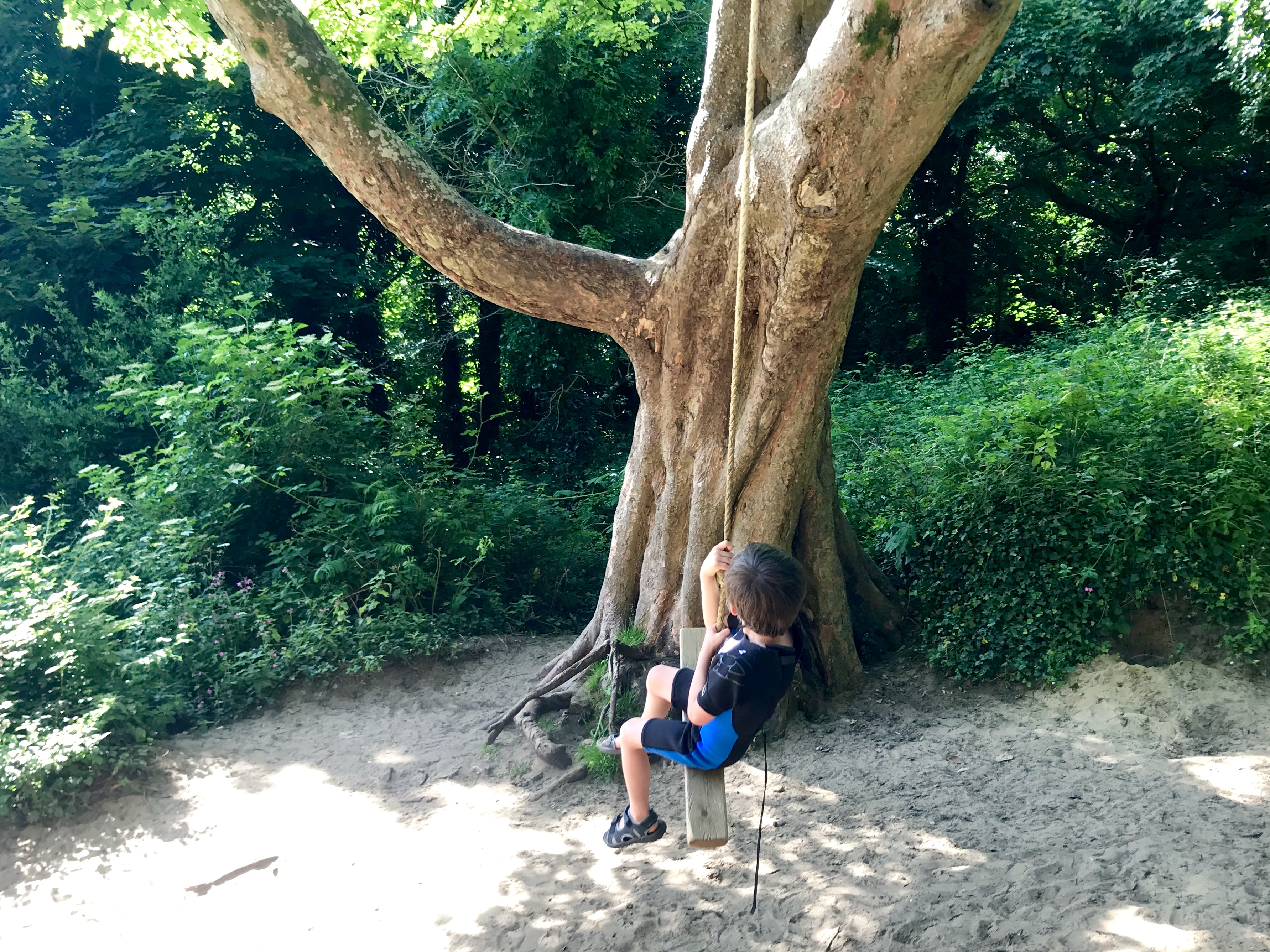 There are two fields for tents, with separate areas for caravans and motorhomes. A family tent for up to two adults and three children costs from £23 to £35 depending on season

We stayed on The Shop Field, which is right behind the shop and café, and shower/toilet block. It’s a gradually sloping field, with the most incredible views across the Bristol Channel to Devon. The slight downside is that the back of the field has a busy road behind it, which was louder than we had expected at night, although not enough to put us off visiting again.

We found the staff really friendly, not just during check-in but all weekend. They all seemed very hands-on and active around the site, and happy to help and generally chat to guests. 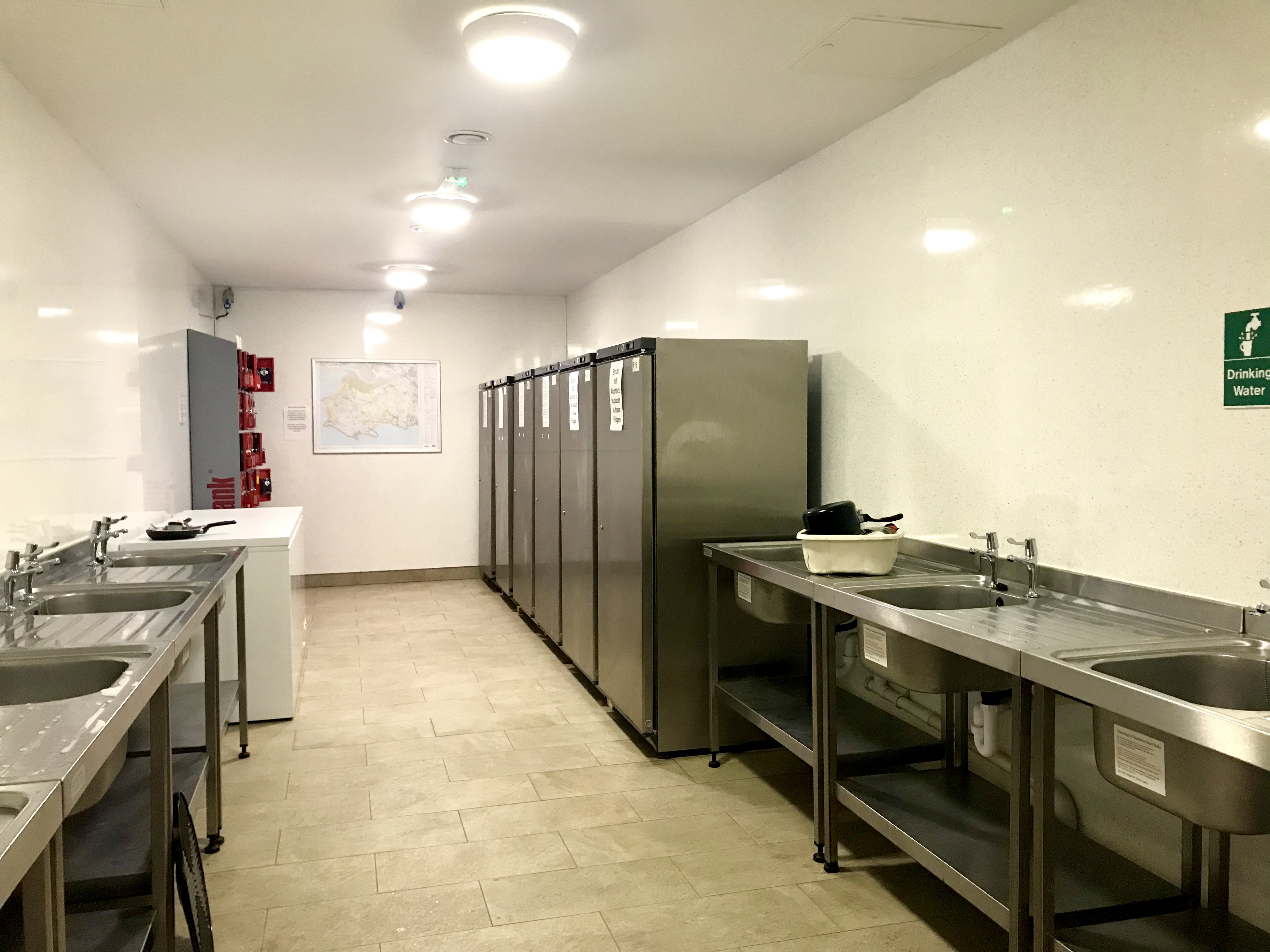 This was especially true when it came to the toilet and shower facilities, which are fantastically modern and incredibly clean. The staff seemed to be cleaning them constantly, especially during peak times, for example late Saturday afternoon when everyone was coming back from the beach, covered in sand and the staff were mopping the showers after each use. The block was built in 2014 and includes plenty of toilet cubicles, a family toilet room, spacious shower cubicles with underfloor heating and a decent space to dry and get dressed, plenty of toilets – and the showers are free to use (some campsites charge). The building also houses a washing-up area, large fridges and freezers, and mobile phone charging lockers.

The shower and toilet facilities in this block are all unisex, although there are separate facilities for women and men on the caravan field, as well as a laundry room with washing machines and tumble dryers.

A day at Tor Bay

We had a slow start on Saturday morning, exploring the woods and playing on-site. And then it was off to the beach from around 11am where we stayed until early evening. 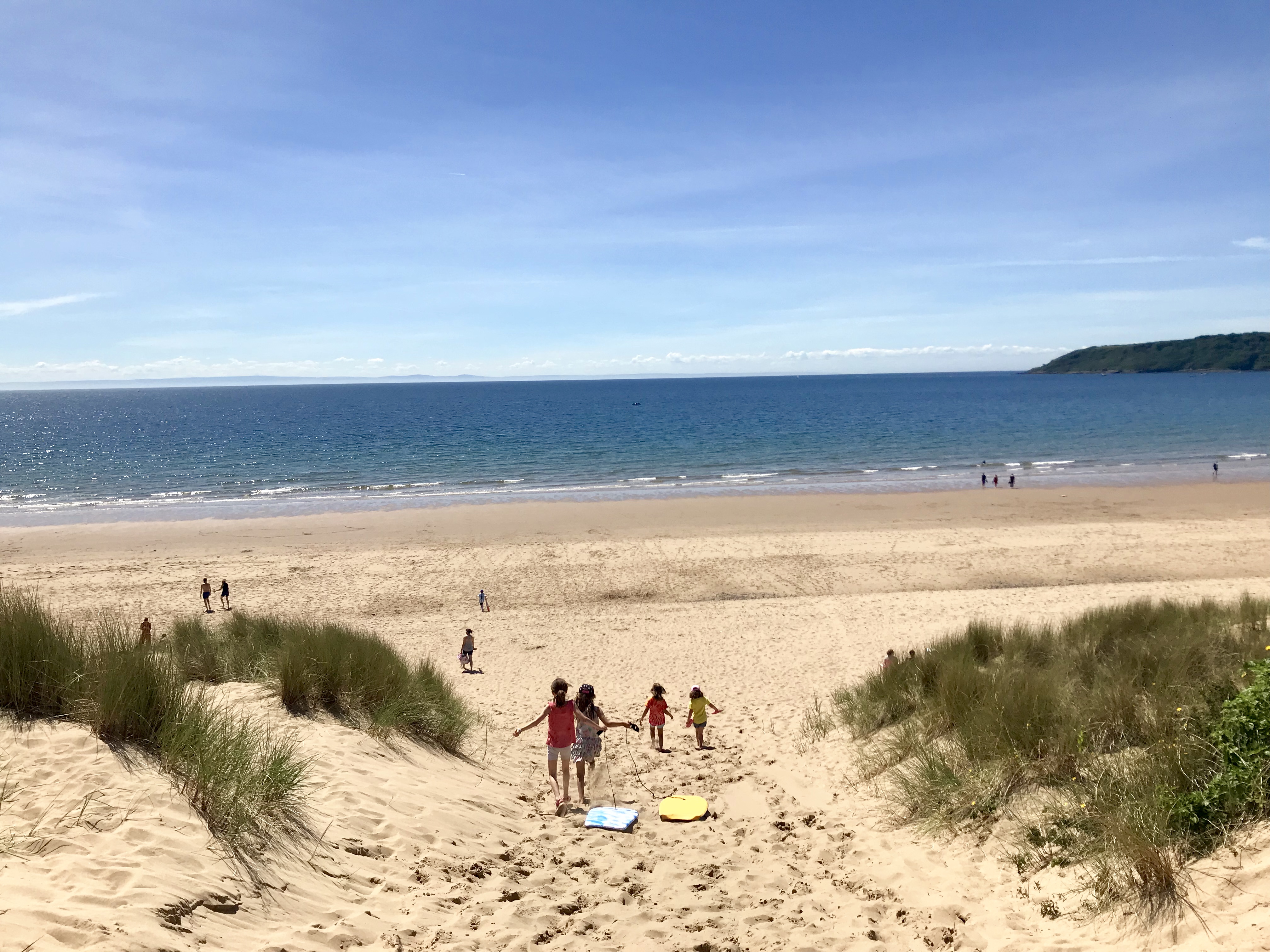 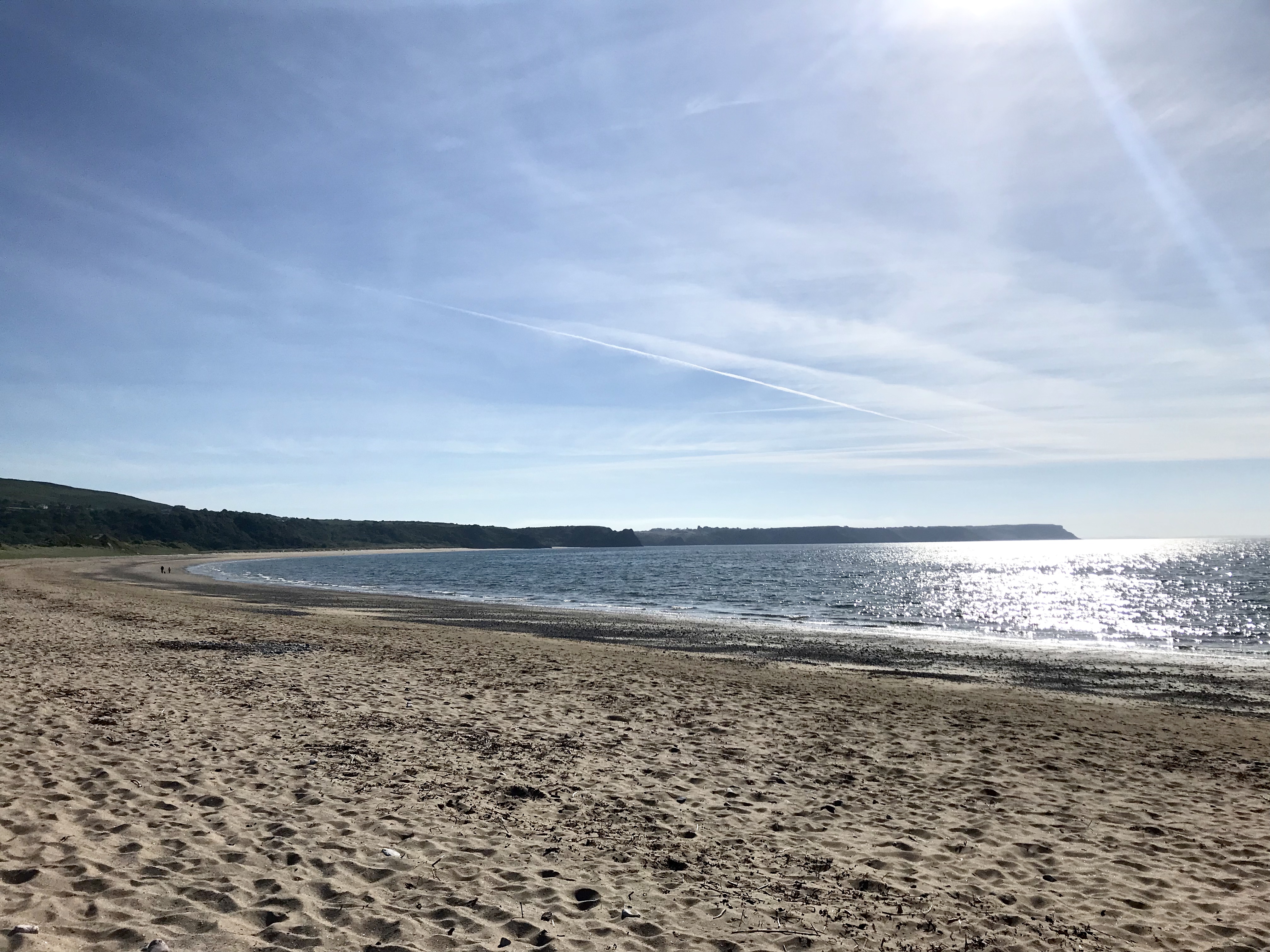 Nicholston Farm leads directly to Tor Bay, a beautiful sandy beach nestled between Three Cliffs and Oxwich Bay. It’s a 10-minute walk downhill through the woodlands and sand dunes – and about double that getting back up with tired kids as it’s steep!

Sadly it’s not accessible for buggies or wheelchairs, although Oxwich Bay is a five-minute drive away, with the car park leading directly to the beach. There are no facilities at all, including no toilets, so you do need to be prepared. There are also no lifeguards. 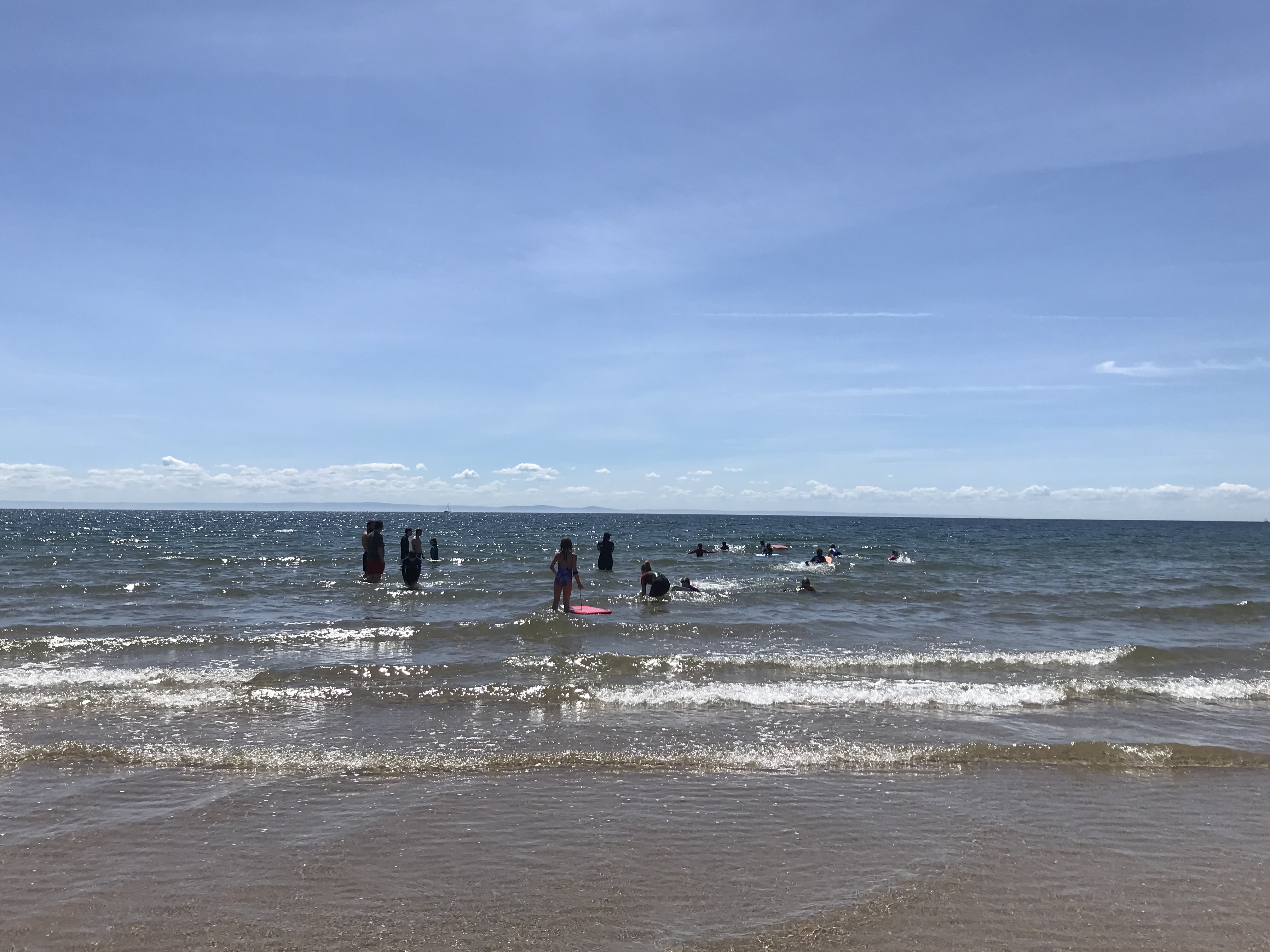 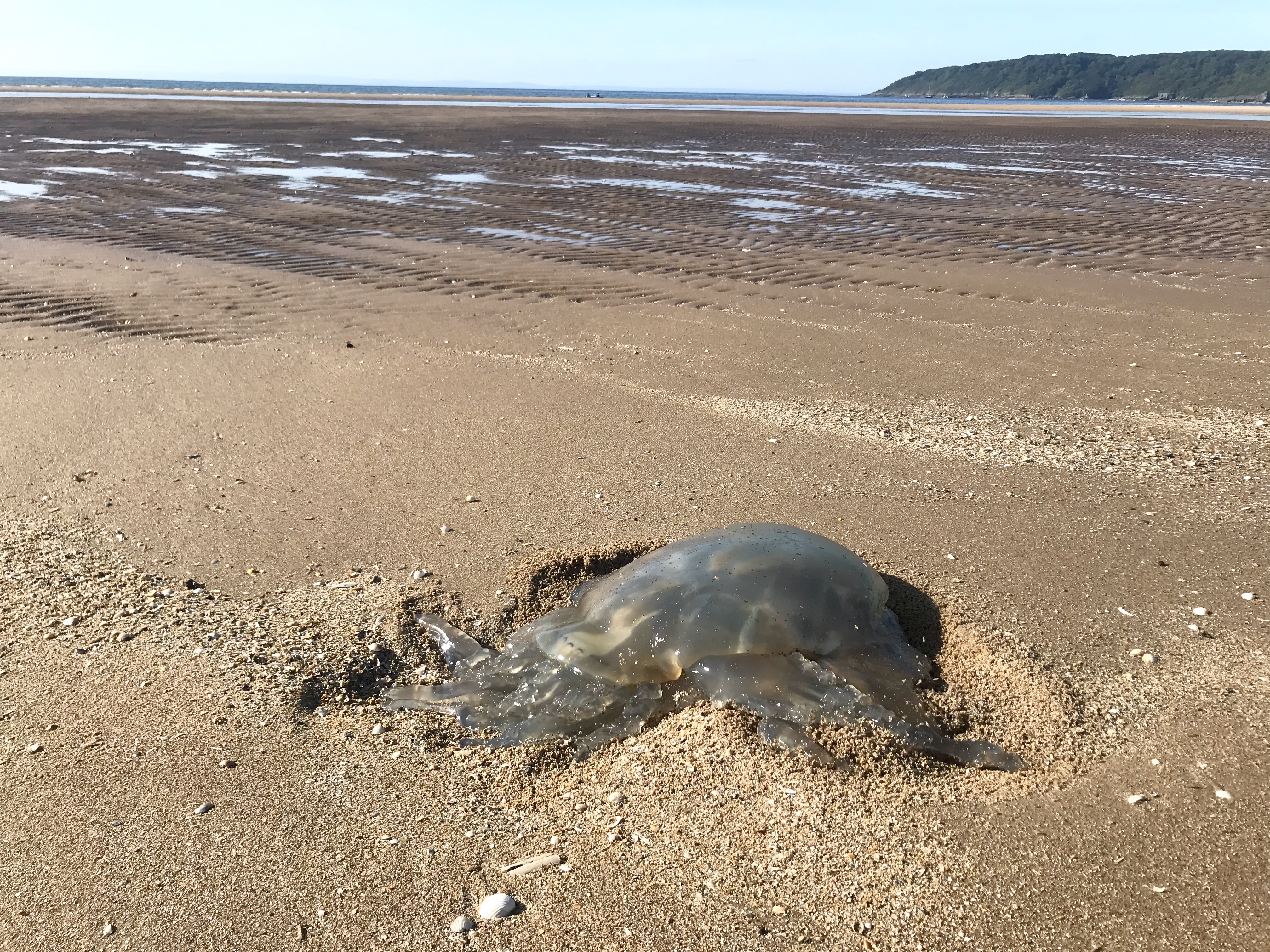 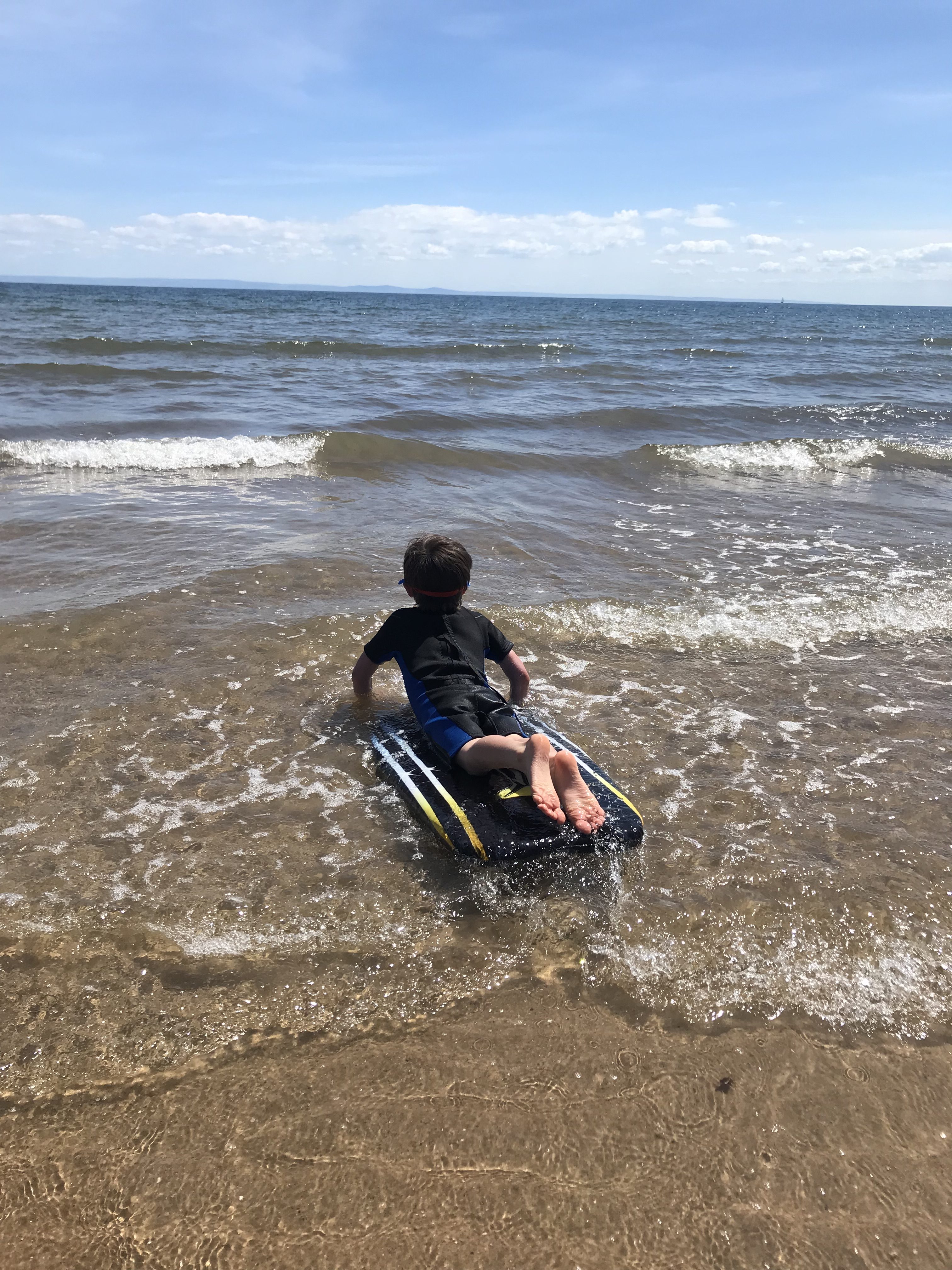 There were only a few other people on the beach so we easily found an area big enough for all of us to sit together. Many of the children had bought body boards and wetsuits with them, so they were straight in the water splashing about in the waves.

A group of the older children built an intricate sand castle complex, and went for a walk to the cliffs, where they found several rock pools and caves to explore.

Heading towards Oxwich Bay, is a bridge over a sea river with a rope swing hanging above the water. We didn’t make it that far sadly, but I spotted it while out running. 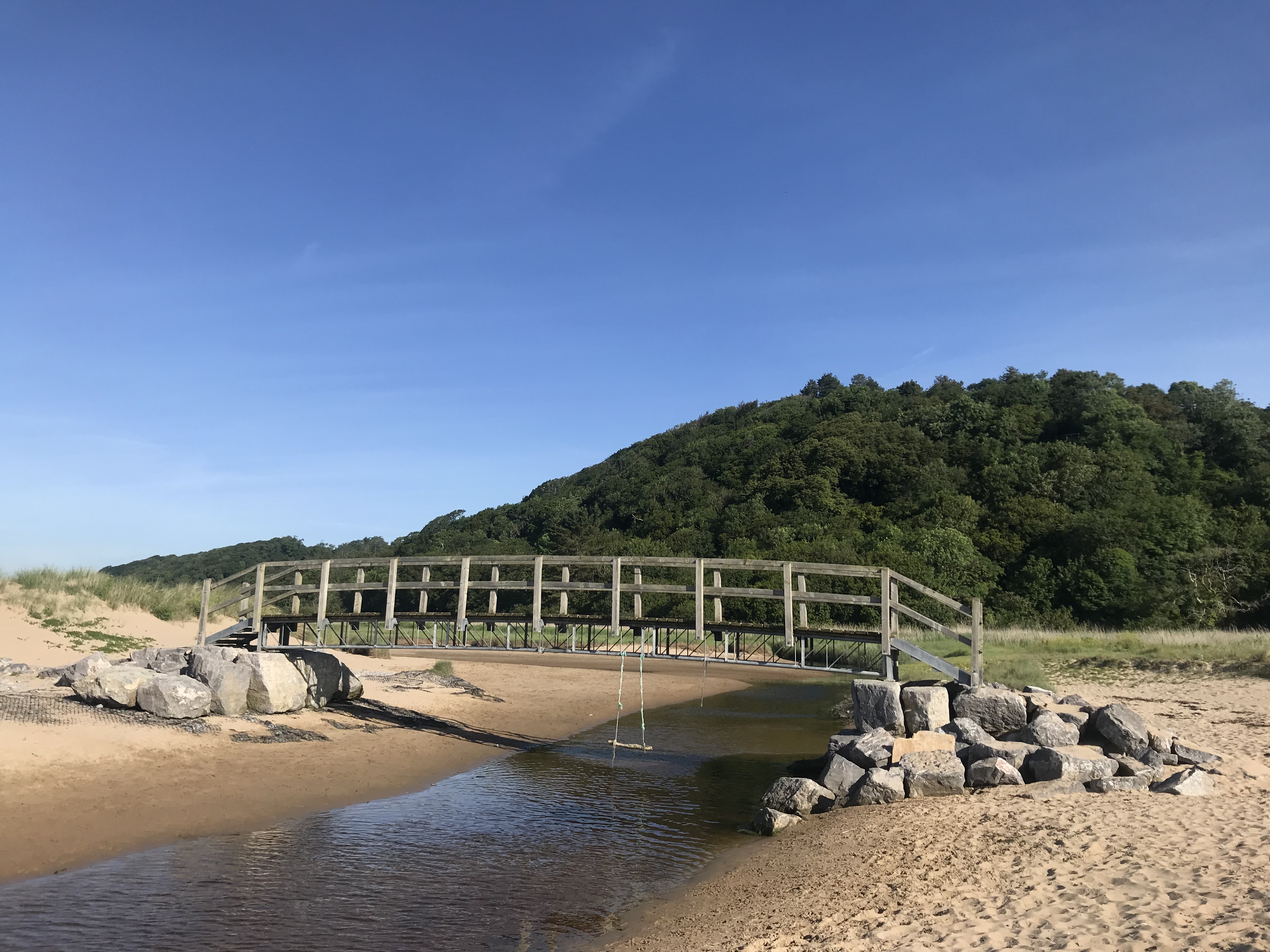 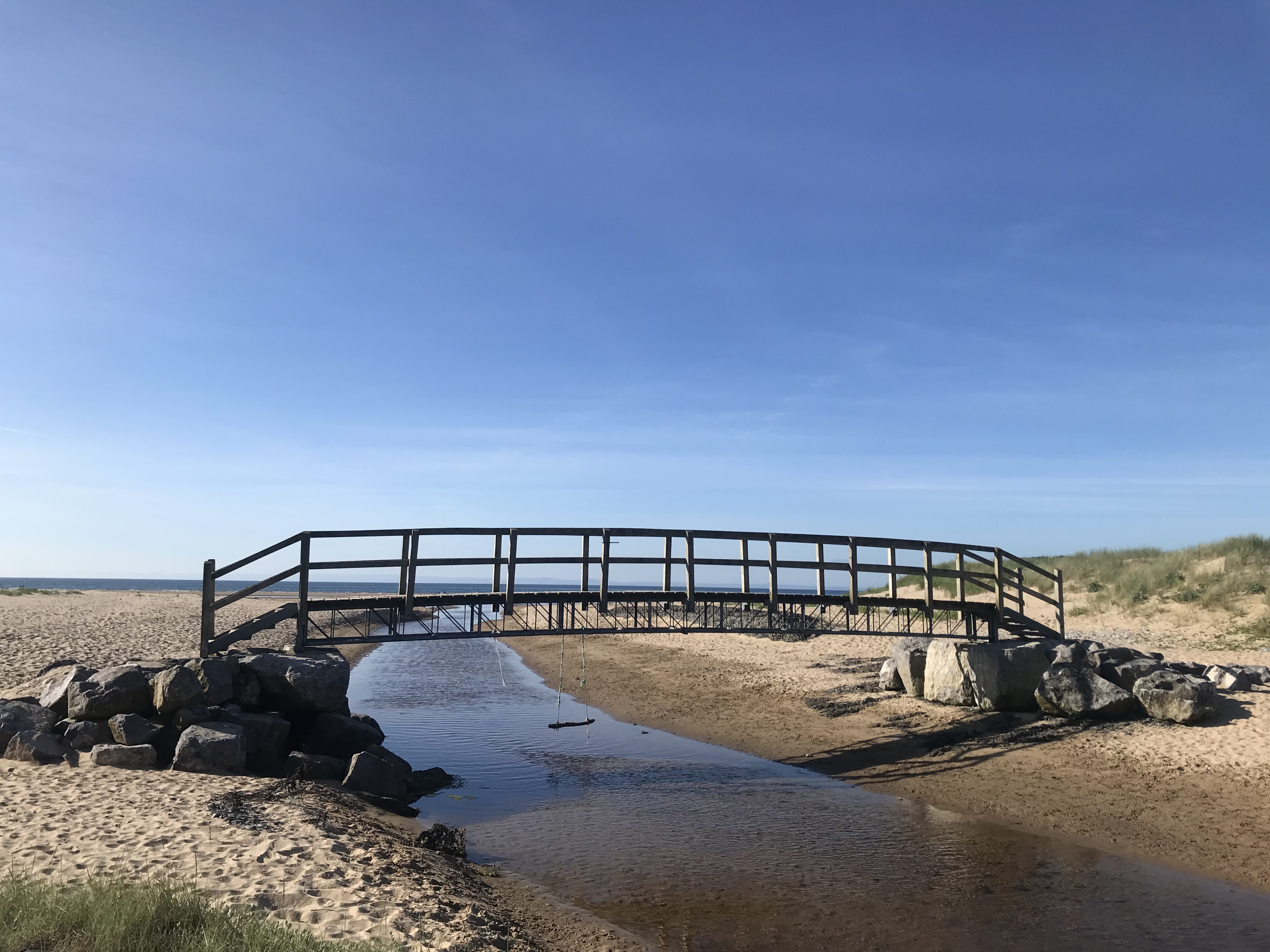 There’s no way I could resist going for a run in such beautiful surroundings and I managed to fit in two early mornings runs over the weekend.

They were tough – taking on steep sand dunes, woodland paths and running along the sand. 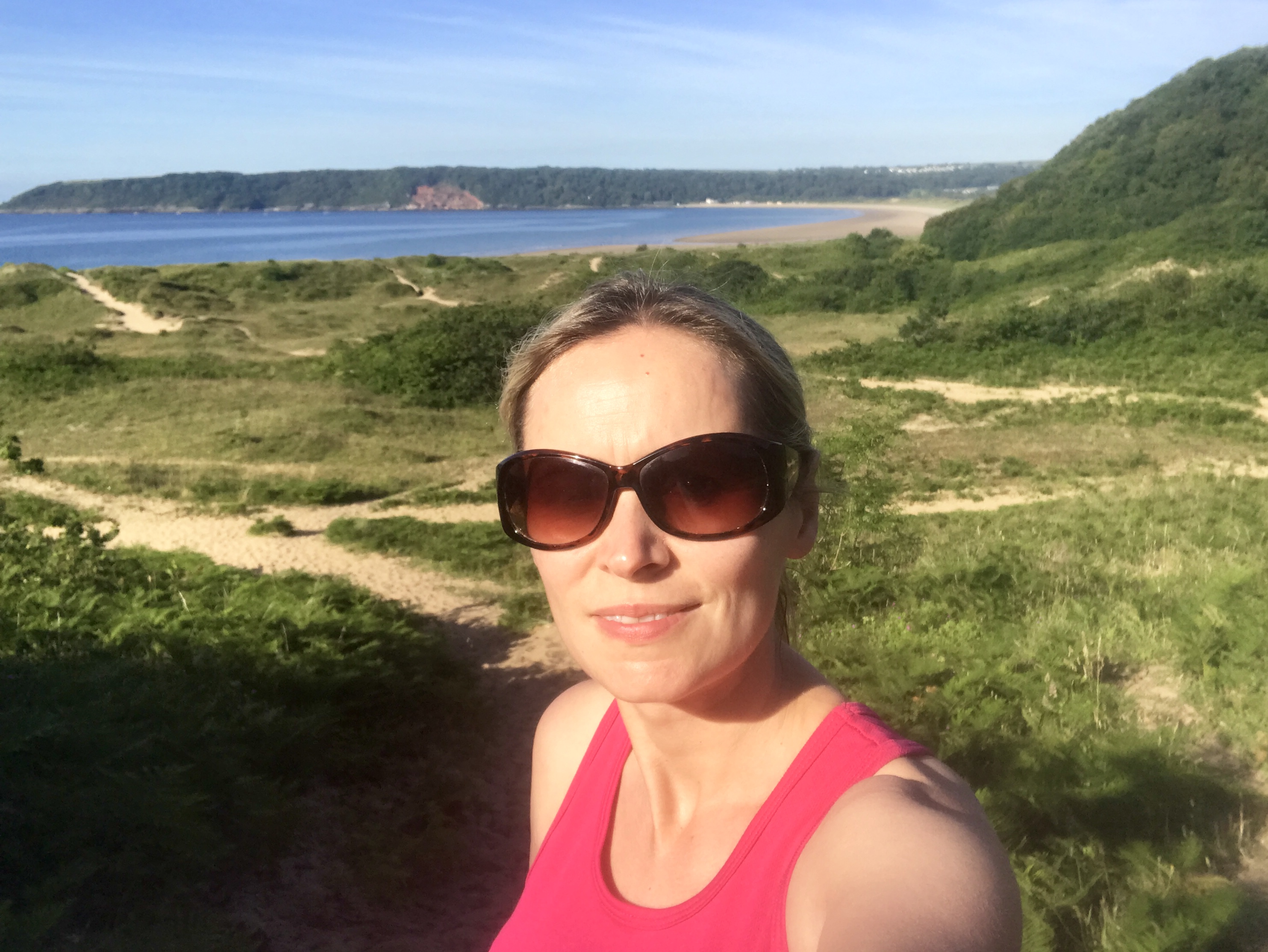 But it was worth it for such picturesque views and to have the sea air on my face. I started at the campsite, headed down the trails to the Tor Bay, turned right and ran across the beach for a while, before heading into the Oxwich nature reserve sand dunes to Oxwich Bay, and then back again.

It was a difficult route and it was hot, which meant my pace was a lot slower than usual – but with the beach pretty much to myself (other than the dog walker I asked to take this photo) it’s one of my favourite runs to date. Certainly the most scenic! 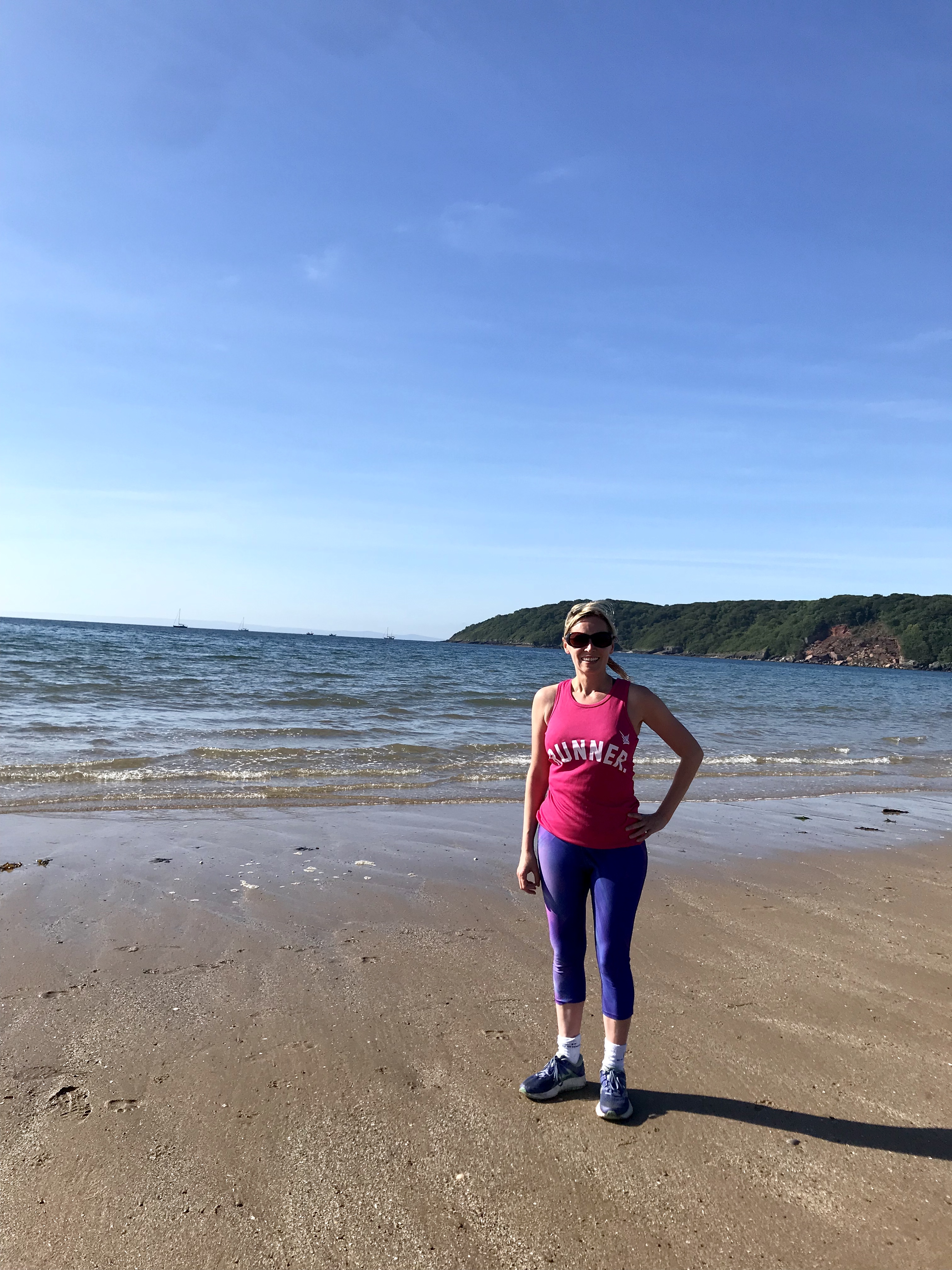 Evenings around the firepit

Saturday night saw the main birthday celebrations for my friend, again with each family organising its own evening meal. A few went to a nearby fish and chip shop, with the rest either cooking on camp stoves or barbecuing. Campfires aren’t allowed, but you can have firepits and barbecues provided they are elevated from the grass. Again, it was another night of the grown ups sat around chatting and listening to music, while the children played until it was dark. 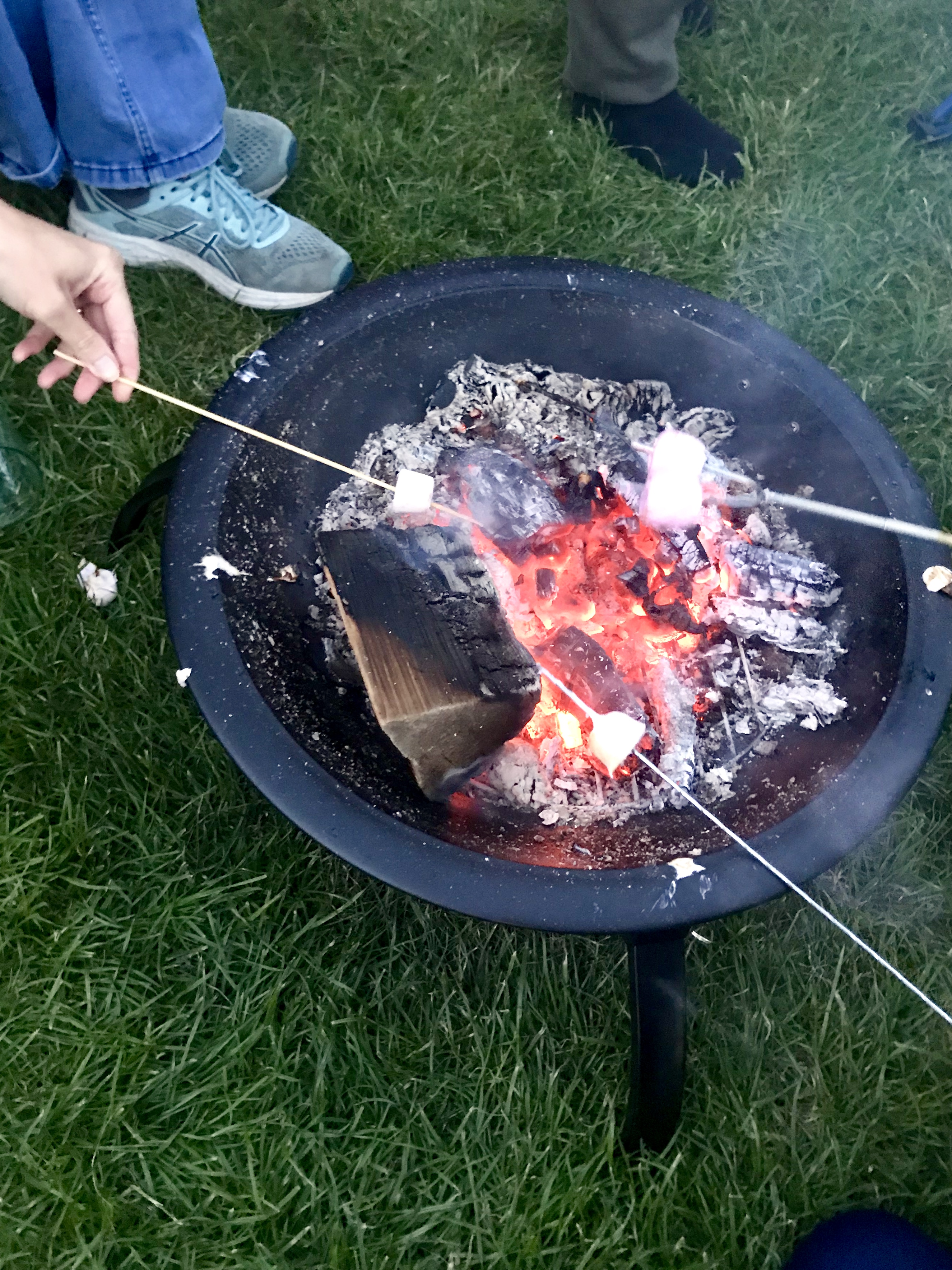 With our check out on Sunday at 11am the morning was mostly spent taking down the tents and packing up before hitting the road back to Cardiff, feeling refreshed and revived after our free-range coastal camping experience.

Also in the area for families

You might also like these posts: Family camping at Beeches Farm Campsite, Chepstow and Glamping at Cuckoo Down Farm East Devon.

See all our family travel posts here and posts about family-friendly days out in South Wales here.