*Thanks to Wales Millennium Centre for the review tickets

My hands have just about stopped shaking and ears stopped ringing from all the screaming after Take That turned up on stage during the closing number of The Band at Wales Millennium Centre last night (you can watch my Facebook Live video of it here).

Even before the show started the electric atmosphere was quite unlike anything I have witnessed at WMC before. Rumours that the band were going to make an appearance as they have on other opening nights of the UK tour of their new stage musical were rife and every inch of the Donald Gordon theatre was oozing excitement and anticipation.

Yet even those of us press who had been let in on the secret (I’ve known for a month and didn’t tell a soul and it was killing me!) and who sat with camera phones poised for the duration of the show didn’t quite believe it until Mark Owen, Gary Barlow, and Howard Donald were actually there on the stage right in front of us.

Along with Robbie Williams (who sadly wasn’t in Cardiff tonight – why not Robbie? Why not?!) the three band members co-produced the new stage musical. Written by the acclaimed Tim Firth and produced by David Pugh and Dafydd Rogers, it features a number of their biggest hits including Back For Good, Shine, Rule The World, Greatest Day and – my personal favourite – Never Forget.

But away from the superstar appearance and the global adoration of its creator, is the show actually any good? 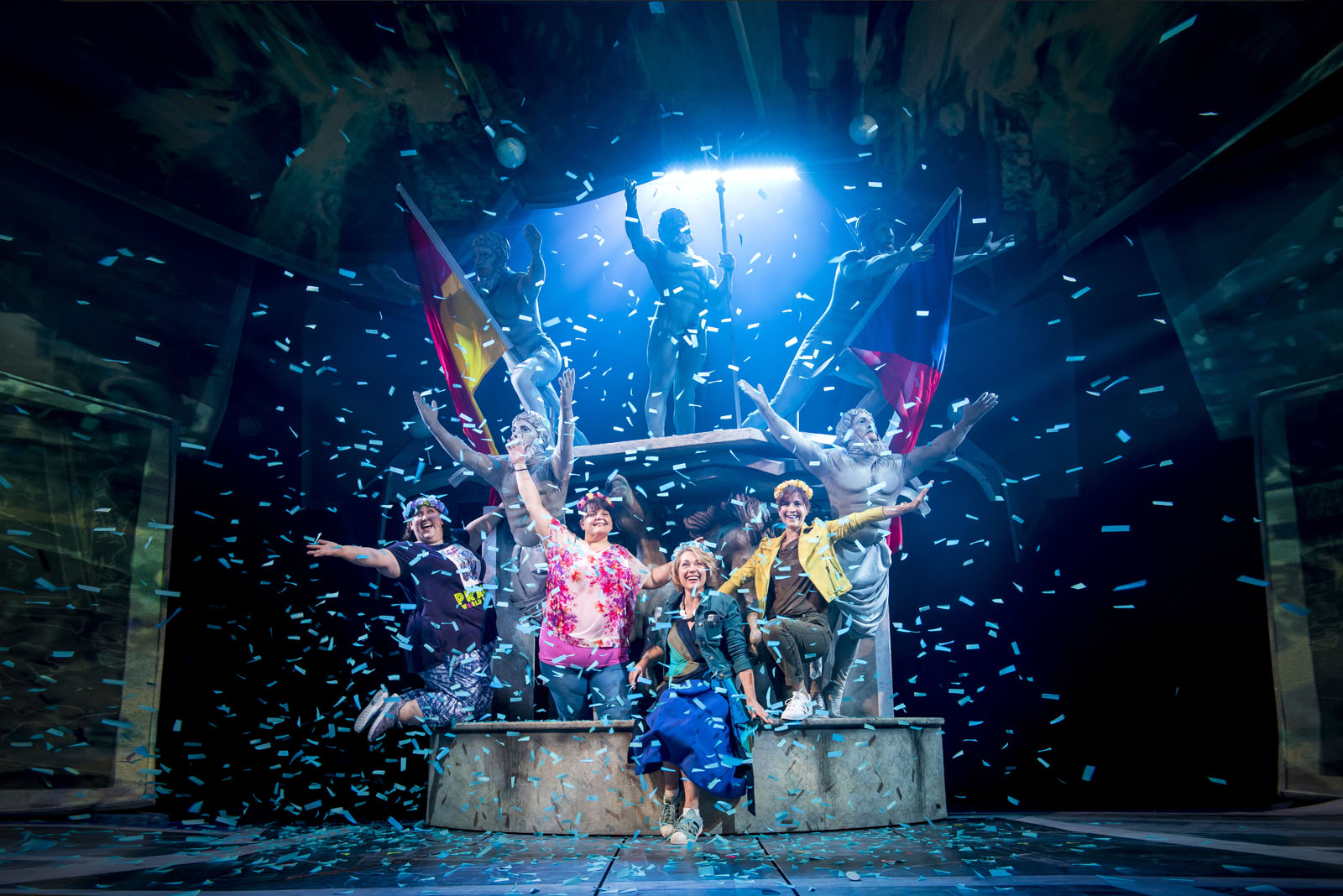 Hand on heart, I can honestly say it is one of the best nights out I’ve had in a long time. Myself and my theatre companion for the night – Sarah of The Herniman House blog – both absolutely loved it (you can read her review here). Even without the presence of Take That it’s an utterly amazing show with high production values and concert-worthy lighting and effects that took us on a roller coaster of emotions and left us on a real high.

I sang and sang.

And on the way home I sang some more.

The Band is set in 1992 and focuses on five 16-year-old friends united by their love of a boyband. We know the band in question is Take That – obviously – but their name is never mentioned. It’s less a show about Take That and more a show about friendship and that universal feeling of being madly in love with a band. Because even if Take That weren’t ‘your’ band so many of us will remember what it’s like to fall in love with a pop star, to have their pictures all over your bedroom wall and to desperately hope that one day they will fall in love with you too. 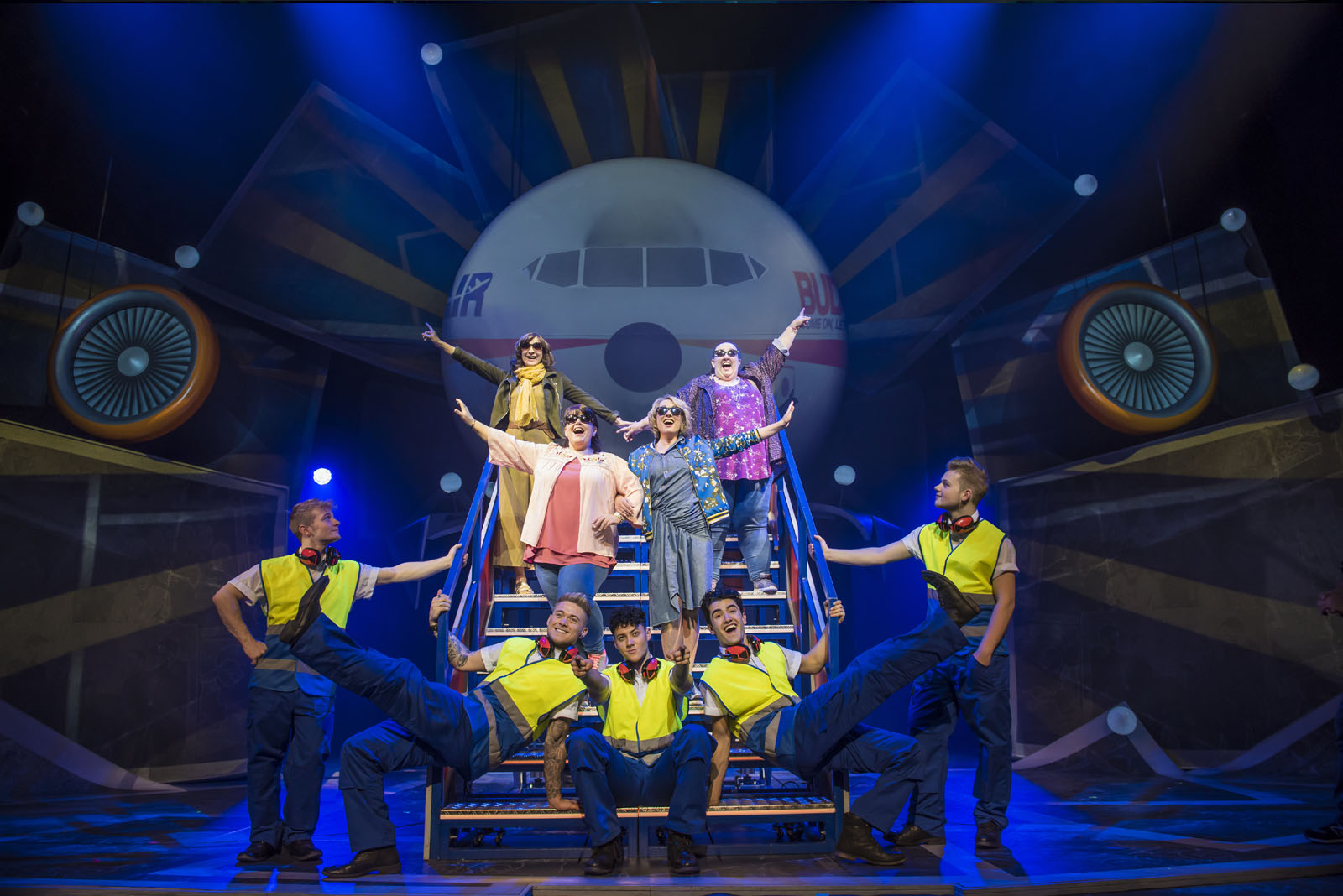 We meet the girls as teenagers who have won tickets to see the band in concert. Watching them felt like casting a light back into my own teenage years of jumping around my bedroom singing into a hairbrush to words from Smash Hits! or carefully writing lyrics down by hand after rewinding and pausing songs taped off the radio for hours on end. Learning dance routines. Not leaving the house on a Thursday night because you absolutely have to watch Top of The Pops. Sharing your hopes and dreams for the future with the friends you think will always be in your life.

But then tragedy occurs and the girls go their separate ways…. until we meet them 25 years later reunited as adults after one of them wins tickets to see the band in Prague.

The show is less about the concerts and more about the journey the friends go on. 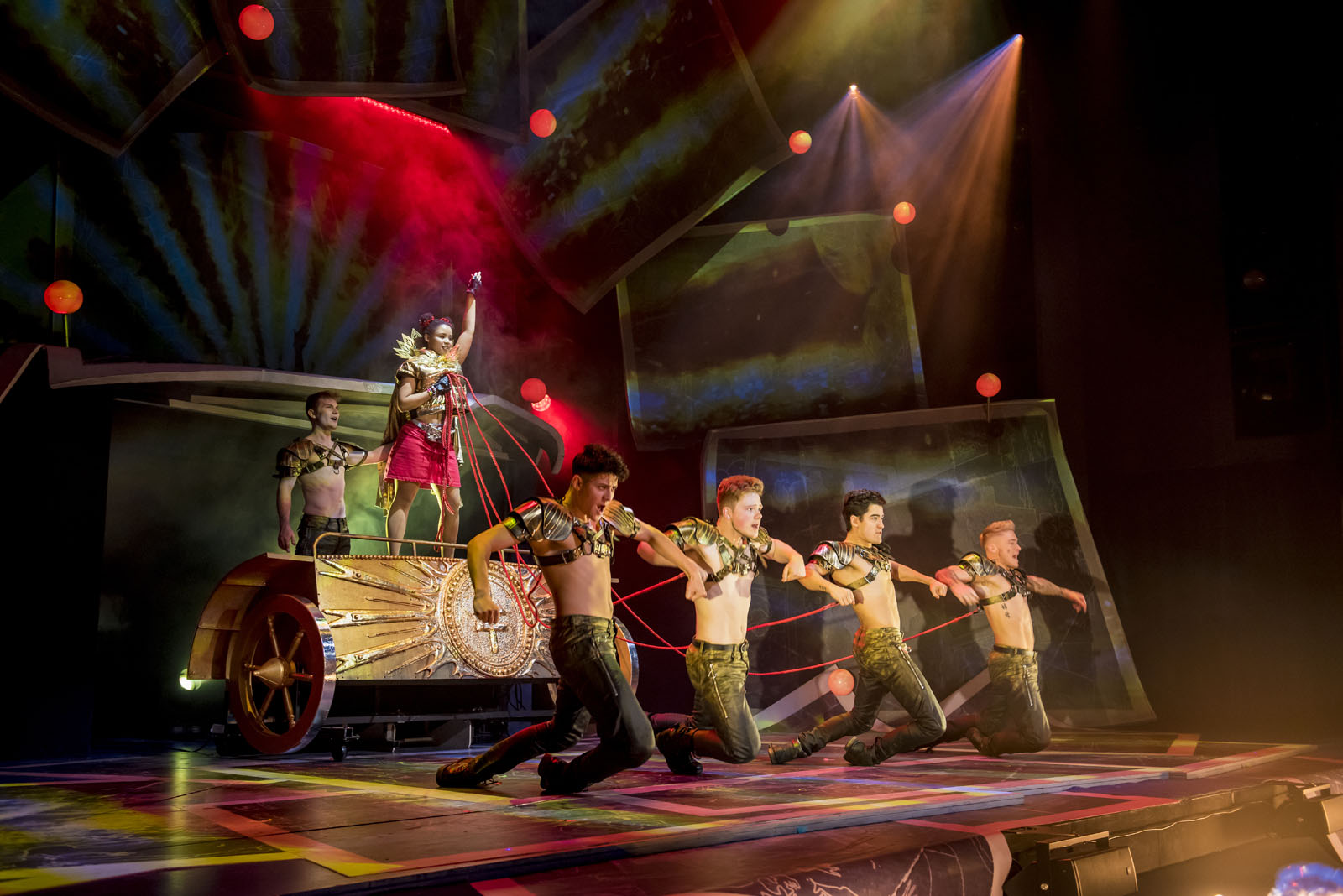 We see the band popping out of cupboards in bedrooms and from lockers at school and even on the bus as lead character Rachel – played by Faye Christall as a girl and Rachel Lumberg from Connah’s Quay in Flintshire as a woman – imagines the music she is listening to coming to life.

The scene where the women sing Back For Good to their teenage selves is so perfectly executed my eyes were filled with years as the lyrics took on a new significance. Oh, if only we could prepare our teenage selves for the road ahead.

The band are played by Five To Five – the young boyband found on the BBC talent show Let It Shine. AJ Bentley, Curtis T Johns, Yazdan Qafouri, Sario Solomon and – for tonight – Harry Fabulous Brown stepping into Nick Carsberg’s shoes, are energetic, tuneful and so charismatic. It can’t be easy playing such icons – especially when those icons are watching you back stage – but they have such an incredible stage presence it’s no wonder they are gaining a legion of fans in their own right.

The Band is emotional. All around me women were wiping tears from their eyes. But just before things get too sad, a great comedy one-liner lifts you just when you really need it.

Some of the women’s scenes in Prague had me crying with laughter. Andy Williams as Every Dave is absolutely brilliant with his witty lines and great comic timing. And Martin Miller as Rachel’s husband Jeff also had a brilliant scene towards the end which had the audience whooping with glee.

But the show really belongs to the women – Rachel Lumberg, Alison Fitzjohn (from Cardiff!), Emily Joyce, Jayne McKenna – and the girls – Faye Christall, Katy Clayton, Rachelle Diedericks, Sarah Jane Howarth and Lauren Jacobs. This is a story about the complexities of friendship and how youthful experiences bind you for life.

Watching the girls’ journey I couldn’t help but think of my own childhood and teenage friends. It made me really miss friends I haven’t seen for years and friends who are no longer with us so much. Friends who made me who I am today.

It reminded me of how one song can so vividly transport you back to a time and place that you almost believe you are there. Not just memories but sights, sounds, smells and feelings too come to life. 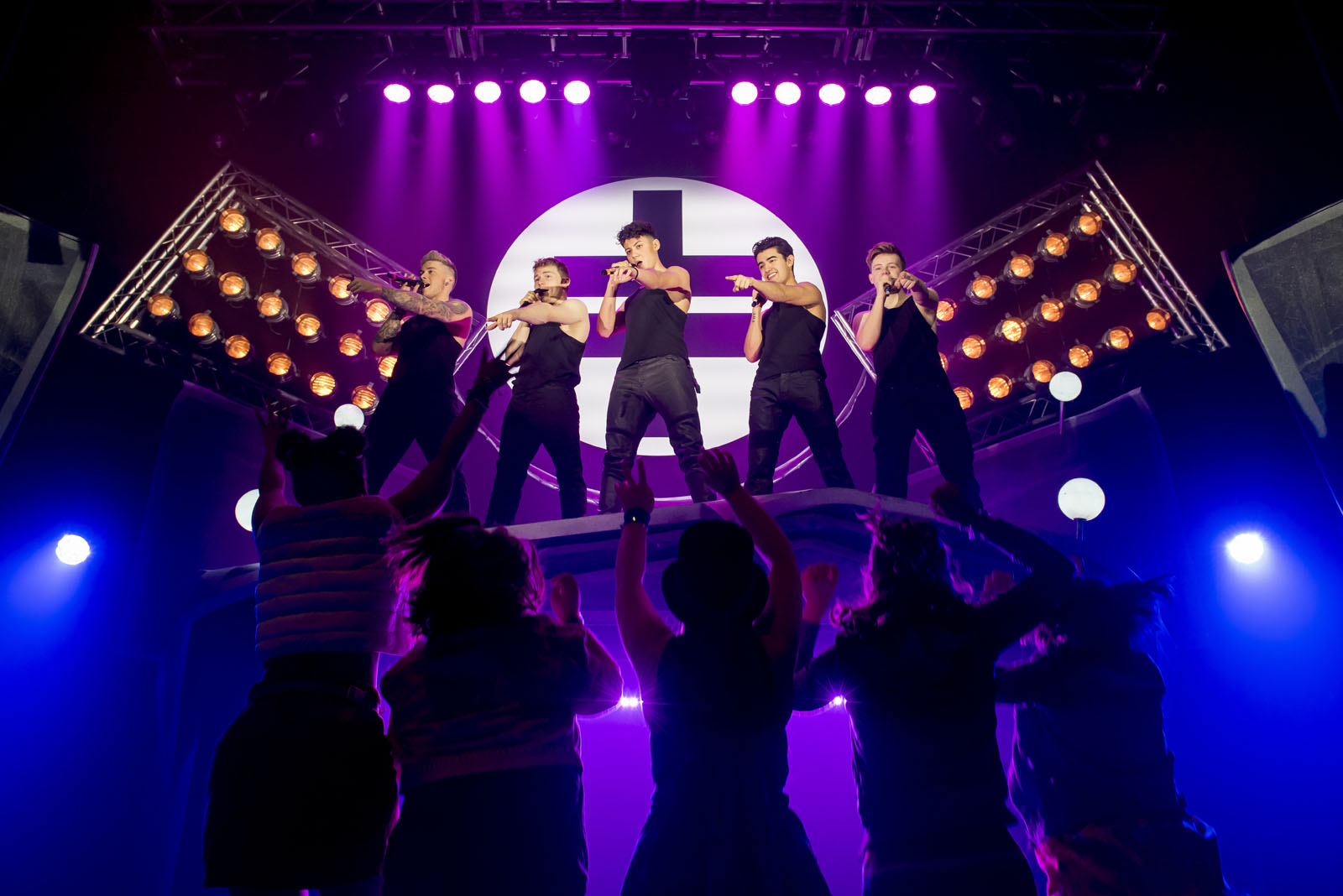 If you thought this was just a gratuitous and cheesy musical so that Take That could earn a few more bucks, you’d be wrong. It’s a beautiful story about friendship and the power of music.

Grab your tissues, grab the females in your life*, and book your tickets now. The Band is the perfect way to brighten up a dull January.

(*or any obliging males!)

Homepage » Beyond the kids » Take That made a surprise appearance at Wales Millennium Centre – but what’s their new musical The Band really like?

3 Comments to Take That made a surprise appearance at Wales Millennium Centre – but what’s their new musical The Band really like?