Regular visitors to my blog will know how much Cardiff Daddy and I love reading with our children. And thankfully, all three littlies seem to have inherited a passion for books too. So you can imagine how excited we were to be invited to Cardiff Children’s Literature Festival (if we hadn’t been invited we would have been there anyway!).

With over 50 events taking place in venues across the city centre, this is a real celebration of children’s literature in both English and Welsh. Following four days of schools’ events, the weekend has been jam-packed with popular authors and illustrators giving us a glimpse into their craft and bringing their characters to life on the stage. The only downside of such a packed programme is that we couldn’t attend everything we would have liked, because some of the events were running at the same time, or there wouldn’t have been enough time to get across the city between one show and the next. 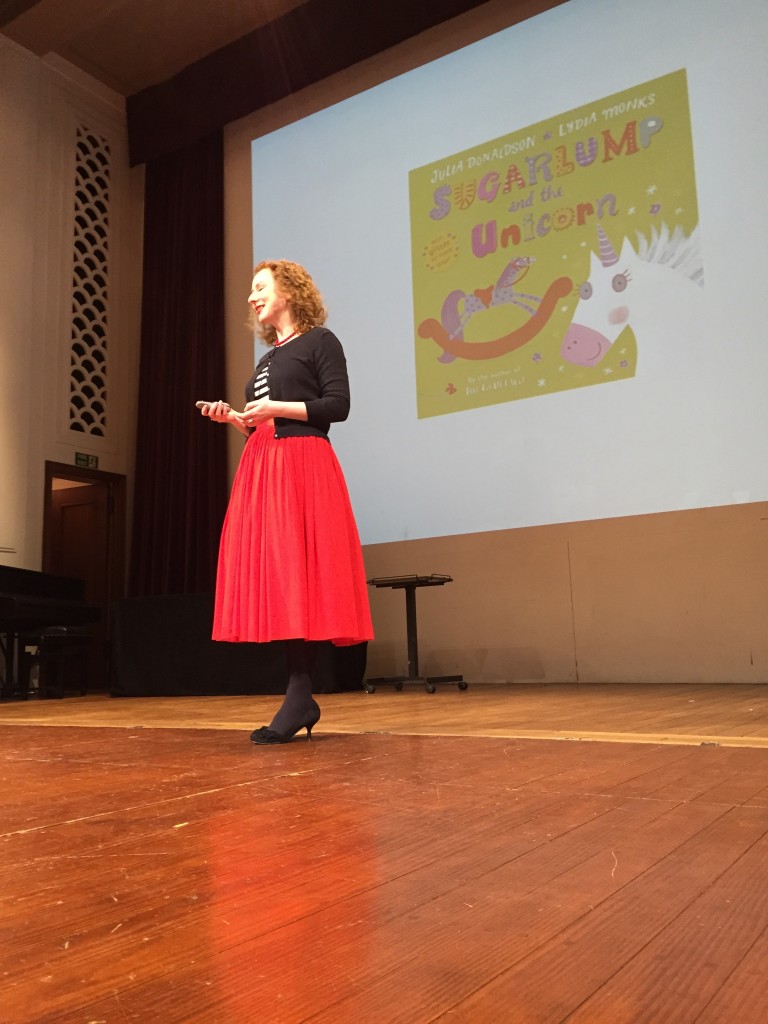 We had a fantastic time at Learn To Draw With Lydia Monks. She has illustrated over 70 books, including ones written by such luminaries as Roger McGough, Carol Ann Duffy and Julia Donaldson, not to mention the growing collection of books she has also written herself.

She gave us a fascinating insight into her life. She’s been drawing since childhood – mostly horses, apparently – and even showing us some of her early works. We learned about her working relationship with Julia Donaldson and she revealed it can take several days for her to draw and paint some of her intricate images.

As someone who really cannot draw at all, I am fascinated by people who can and especially people who make it look so easy. And such is the case with Lydia. Sat at a desk, with her drawing pad beamed onto the big screen, she recreated a host of favourite characters from her books with just a few flicks of her pen, before inviting a handful of children onto the stage, drawing them accompanied by an animal of their choice. She read a couple of her books, and then gave us a how-to lesson in drawing, a step-by-step guide to creating everything from spiders and ladybirds to elephants and Mungo Monkey, star of some of her books. 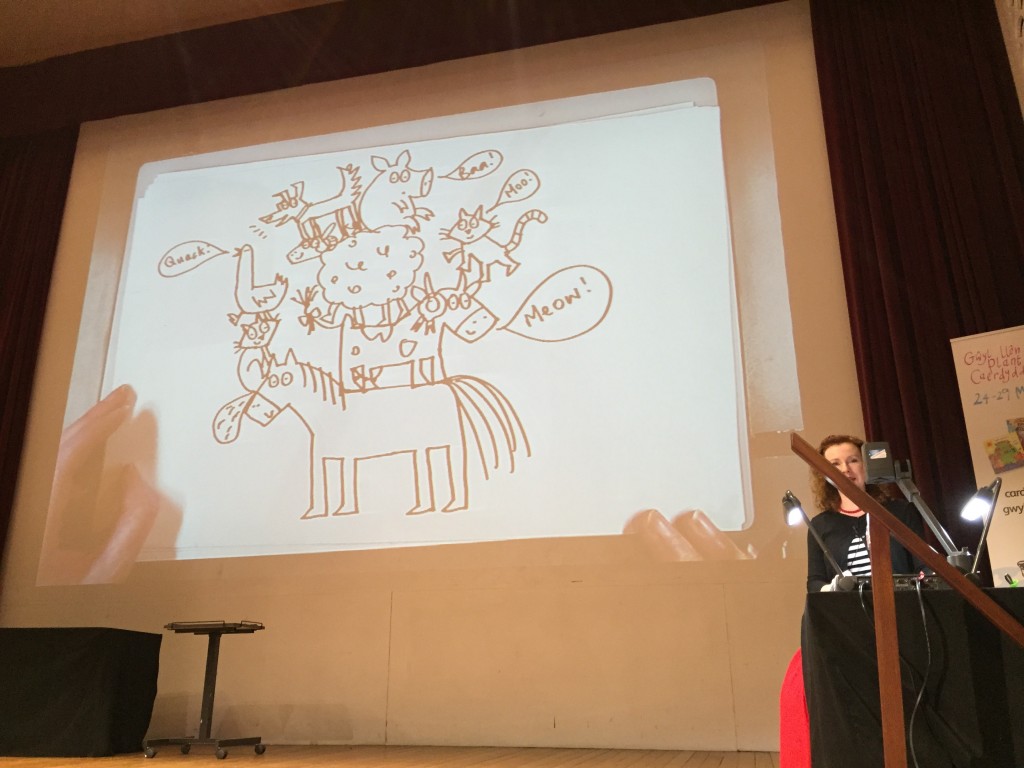 She told us after the show that she does a lot of these events at various literature festivals, and her experience shows in a session that was finely polished but informal enough that she could respond to the suggestions of her audience. My children were disappointed not to be invited onto the stage – but they were thrilled that she signed some of their books, taking the time to draw little pictures too. I almost cried when she gave Baby the illustration she had created on-stage of the animal characters from What The Ladybird Heard. Such a beautiful keepsake of one of our favourite books.

The Dinosaur That Pooped A Show was fast-paced, energetic and fun. Our host, the charismatic and enthusiastic explorer Alastair Watson, got us all roaring like dinosaurs, singing a song about poop, and even guessing which poo belonged to which animal in a quiz called Guess Poo. (Yep, your idea of entertainment certainly changes when you are a parent!) Little Miss E and Little Man O thought it was brilliant and even Baby Boy I was transfixed for most of it. 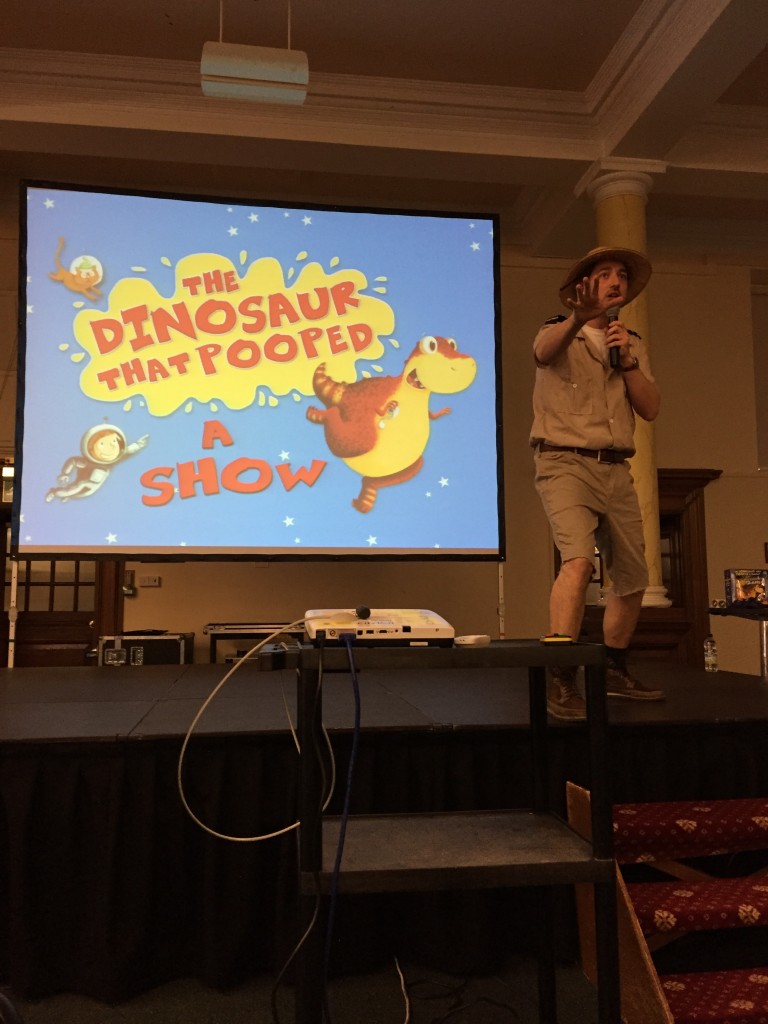 However, and this is a big however, Cardiff Daddy and I left the auditorium feeling disappointed. The show felt more like holiday camp entertainment than literature festival material. It lacked the substance we were expecting. The lack of scenery did not help and at less than 40 minutes long, it felt too short and certainly didn’t provide value for money. 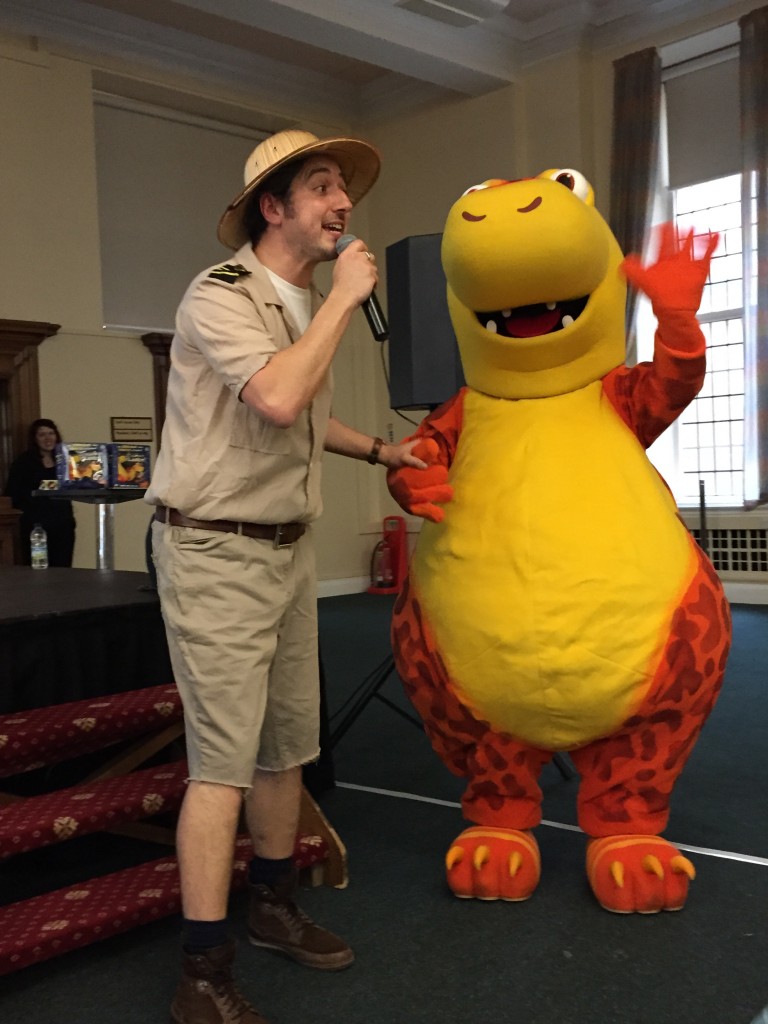 The feedback forms handed out in each session suggest that the organisers are considering running the festival over more days, and offer events to those over 12 (Cardiff Mummy Says readers have also suggested on my Facebook page that there need to be sessions for the under 3 crowd too). I really hope this happens. Cardiff as a city really cares about books and reading – you only have to look at the recent outpouring of community support over proposed cuts to library funding to see that. Such was the opposition that the idea was abandoned. It would be wonderful to see what is already a flagship cultural event in Cardiff continue to grow, inspiring children to read, write, draw and create.

Cardiff Children’s Literature Festival continues tomorrow, Sunday 29th March. There are tickets remaining for some events, as well as free events across the city. See the website for details.

Have you been to Cardiff Children’s Literature Festival? Come join in the chat on my Cardiff Mummy Says Facebook page or tweet me on @cardiffmummy

You can see all of my blog posts on children’s books here.

Disclaimer: We were given complimentary tickets to the above sessions in return for an honest review. All opinions are my own.