Ever since Little Miss E and Little Man O saw the trailer for Peppa Pig The Golden Boots a few months back, they have been desperate to see it in the cinema.

Like most children their age, they love the TV cartoon about the cheeky little pig and her family. They really don’t watch a lot of television, but when they do, this is one of their favourite shows and has been for a long time. They can watch the same episodes repeatedly without getting bored, laughing at the funny bits as if it’s the first time they have ever seen it. 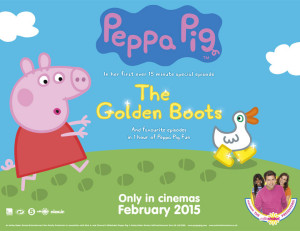 Just to be clear – this is not a Peppa Pig film. It is a Peppa Pig cinematic experience to celebrate 10 years of the show. This means we have one all-new 15 minute episode – The Golden Boots, which is exclusive to cinemas – plus a few classic Peppa episodes, interweaved with three presenters from Channel 5’s Milkshake (which we have never actually watched – we series-link our PP from Nick Jr) getting us to sing and dance and interact with them.

The Golden Boots episode itself is nothing ground-breaking; in fact, everything in it feels all-too familiar. Peppa and her friends stop jumping in muddy puddles to go inside for a drink of juice, and meanwhile Mrs Duck spies Peppa’s boots, puts them on and walks off. The whole cast of Peppa Pig-land tries to find her, so that Peppa can compete in the puddle jumping world cup. Mummy Pig chases after the duck, but with no luck, the gang head out to sea and into space (where who else but Miss Rabbit runs the gift shop), and Mr Potato hosts yet another puddle jumping competition.

My children – five-year-old Little Miss E and three-and-a-half-year-old Little Man O loved it. Even Baby Boy I, who is now 11 months old, was engrossed for the most part, bouncing happily on my lap.

The classic Peppa Pig episodes were a good selection. Little Miss E and Little Man O were properly belly laughing at Mummy Pig rolling down the hill and becoming a giant snow ball in the ski-ing episode. They love the episode where Baby Alexander says his first word – they’ve been trying for ages to get their own little brother to say his first word too. The one where Miss Rabbit and the gang meet the Queen is a favourite of theirs as they love the book, and it’s always nice to see the mummies’ fire brigade saving the day as the hapless daddies fail miserable with the barbeque

The three Milkshake presenters do their best to link together the various episodes and to get the audience engaged in a panto-esque style. “We can’t hear the mummies and daddies,” is unsurprisingly their favourite refrain. All the children in the cinema were shouting at the screen, but it felt a bit stale without the genuine interaction you would get in the theatre. I can imagine at a busier showing than ours that this would have had more impact. The presenters taught us movements to a couple of songs, which my children thought was great fun. They didn’t need too much encouragement to join in and continued singing it all day. 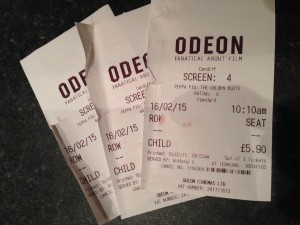 Just imagine what else Mummy could have bought for £18!

But was it worth the £18 it cost me to take my three children along? Yes and no. No, because there was nothing new or unexpected here. We could have stayed at home and watched PP for an hour and spent the money on, oh, I don’t know, a lovely new top for mummy. I’m grateful Baby Boy I was free, as he’s under 18 months, and that Cardiff Daddy was in work, because I think I would have cried if I’d had to pay another £12 for this. As it was a half-term treat though, I smiled through gritted teeth as I handed over a £20 note and got very little back.

It’s a shame the makers of Peppa Pig The Golden Boots couldn’t manage to get more than 15 minutes of material for the new episode. Would half an hour really have been too much to ask for? Or even an additional all-new episode of regular length?

It’s also a shame that when the Milkshake presenters are joined on-screen by Peppa Pig, it is a lame costume with a person inside it, rather than the animated version the audience know and love so well. It’s also a shame that it was so expensive – even though adults pay children’s prices, it’s still a lot for just less than an hour-long feature, with only 15 ‘new’ minutes.

On the other hand, yes, it was totally worth it, because my children enjoyed every moment. My big two sat on the same chair together all the way through the film, which was a pricelessly cute thing to see. They sang and danced along, and cheered and shouted when they were supposed to. I sat with them, and enjoyed the experience with them, rather than desperately trying to get things done around the house as I do if they watch TV at home.

My children have been to the cinema a few times before, but this is an ideal first introduction for young children who have not. A lot of my friends worry about how their children will react in the darkness of the auditorium and whether they will sit still long enough (for the record, no one expects kids to sit perfectly still for the entire duration of a film). The familiar characters are a great way to introduce youngsters to the idea of cinema, while the audience interaction and short episodes mean they only have to concentrate for short bursts at a time.

In short, Peppa fans will love this, even if the parents feel a little cheated.

Have you seen Peppa Pig The Golden Boots? Come join in the chat on the Cardiff Mummy Says Facebook page or tweet me on @cardiffmummy

*Disclaimer: we were not paid to write this review and paid for own tickets in full.

Homepage » Cinema » £18 to see Peppa Pig The Golden Boots in the cinema – was it worth it?

13 Comments to £18 to see Peppa Pig The Golden Boots in the cinema – was it worth it?