Inspiring, fascinating and utterly empowering, Good Night Stories for Rebel Girls is the literary sensation of the last year – and deservedly so.

Originally starting life as a crowd-funded project, this hard-back collection of stories of 100 heroic women quickly became a global best-seller following its release in March 2017.

Each double page features a different woman with one half detailing her life and the other featuring an illustration (which were created by 60 female artists from across the world) and a powerful quote from the woman.Taking its lead from the bedtime stories theme of the book, many of the pages start with the familiar phrases “Once upon a time” or “Once there was a girl who” – but there is nothing of your usual fairy tales here. These are brave and bold women who achieved great and wonderful things; many of them defying gender stereotypes of their time or country and even putting their lives at risk for what they believe in.

We learn about Amelia Earhart, the first woman to fly solo across the Atlantic; and Rosa Parks, the black woman who refused to give up her seat on a bus for a white person and whose actions lead to the abolition of racial segregation in America. There are great women from history including Hatshepsut, the first female Pharaoh who had to pretend to be a man during her reign; and Queen Elizabeth I. 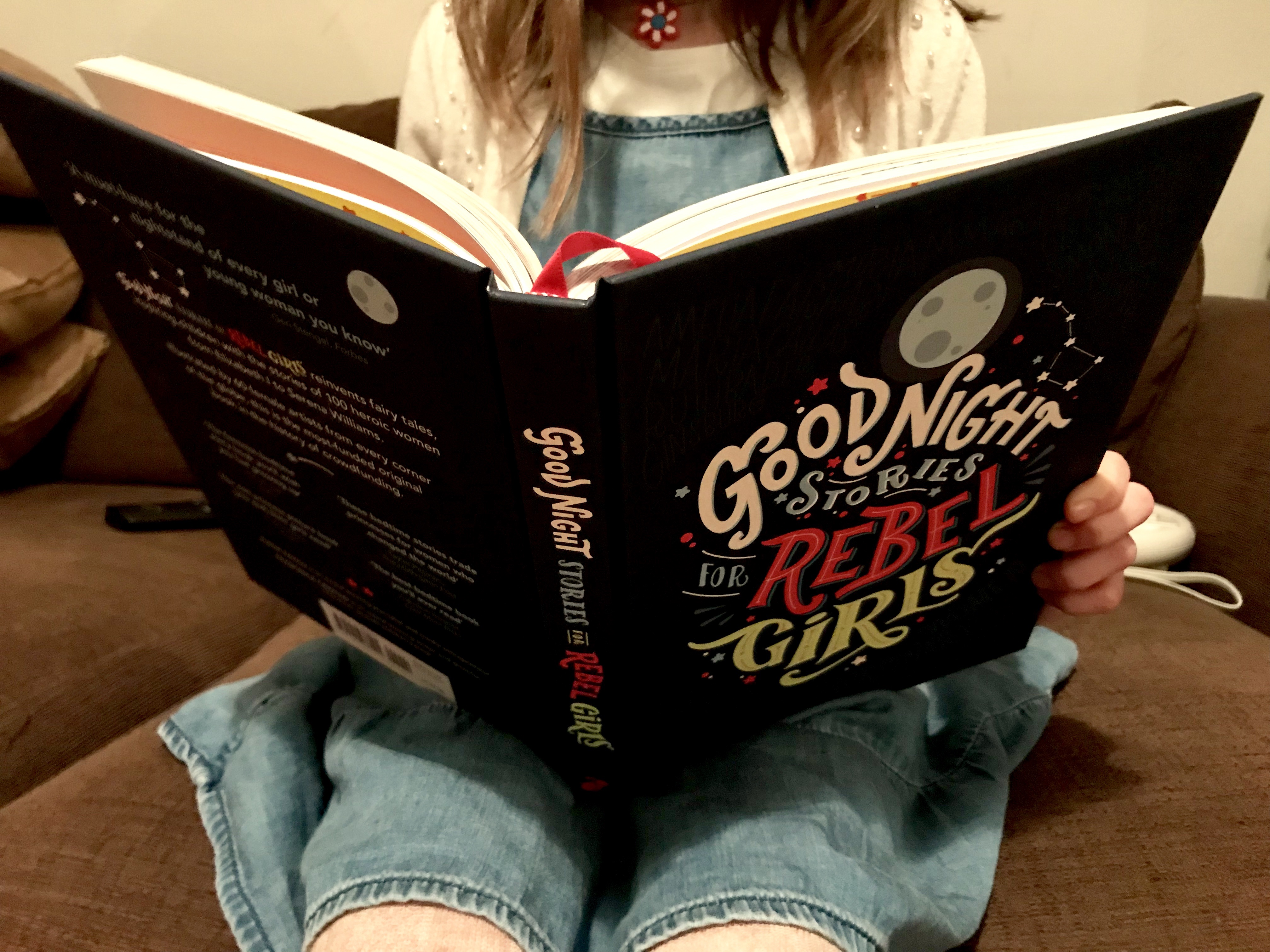 There are contemporary inspiring women such as Malala Yousafai, shot by the Taliban in Pakistan for speaking out about girls being forbidden from attending school and the youngest ever recipient of the Nobel Peace Prize; Sonita Alizedah, a rapper from Afghanistan who refused to be sold into marriage and whose song Brides For Sale went viral; and Coy Mathis a young school child who was born male but who identified as female and whose parents went to court so that she could use the girls’ bathroom in her school.

Plus there are literary and artistic greats such as Jane Austen and Frieda Kahlo; rock star Joan Jett and fashion designer Coco Chanel; and politicians including Evita Perón and Hillary Clinton.

There’s a spy, a formula one racer, a tattoo artist, a boxer, a surfer, a surgeon, a palaeontologist and lots more besides, showing women the world over achieving great things. 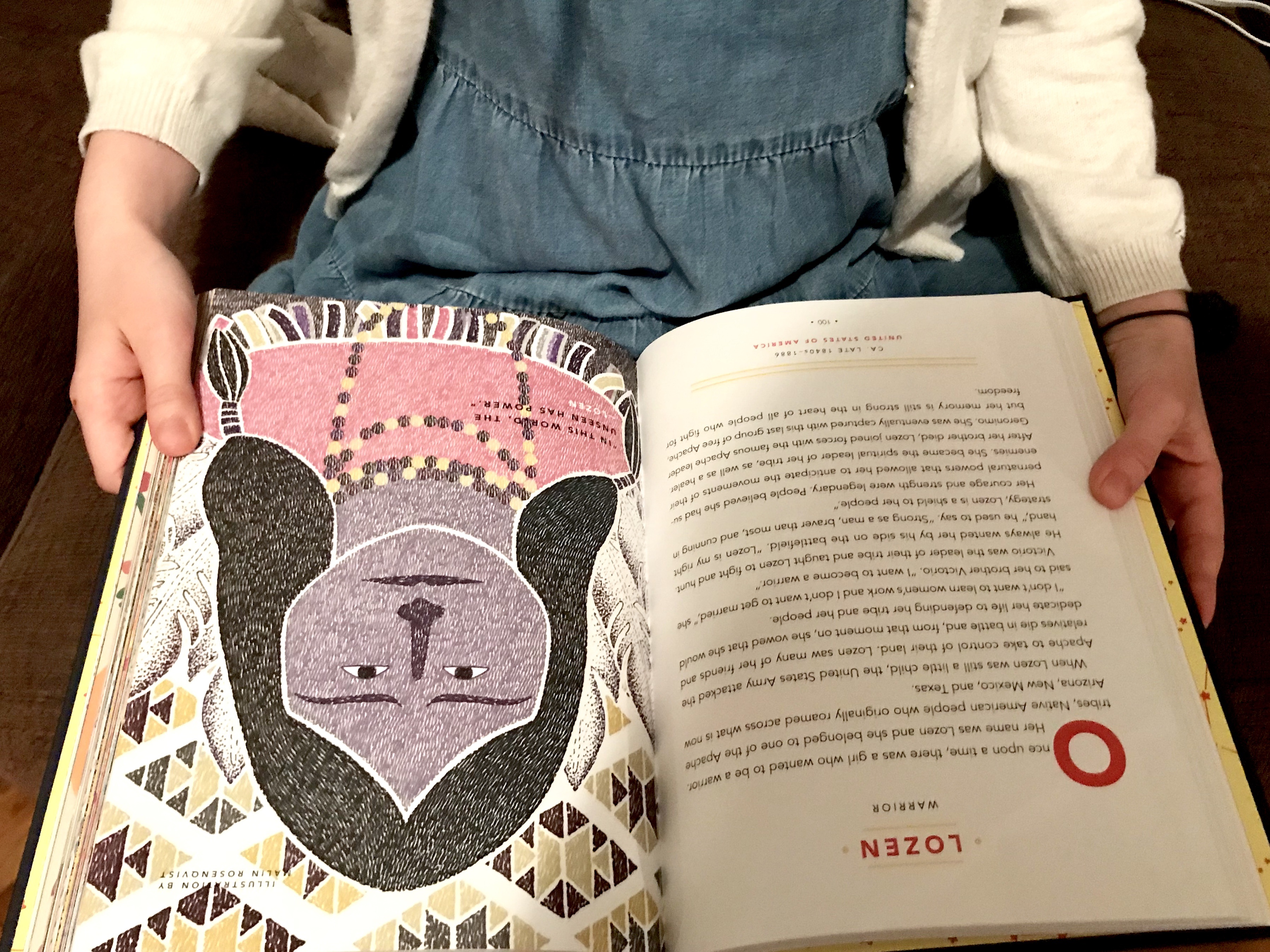 Little Miss E, my eight-year-old daughter, had this book for Christmas (along with the equally-inspiring Fantastically Great Women Who Changed The World by Kate Pankhurst) and has absolutely devoured the stories on its pages. She keeps telling us facts about the amazing women and all that they have achieved. “Mummy, did you know there was a woman called…. and she….” has become a regular conversation starter in our house. She has definitely got the message that women don’t have to be confined to gender stereotypes and can change the world. We’ve all learned a lot from this book and it has resulted in further research on some of the women as we strive to learn more about these pioneers. We can’t wait for Good Night Stories for Rebel Girls 2, released later this year. 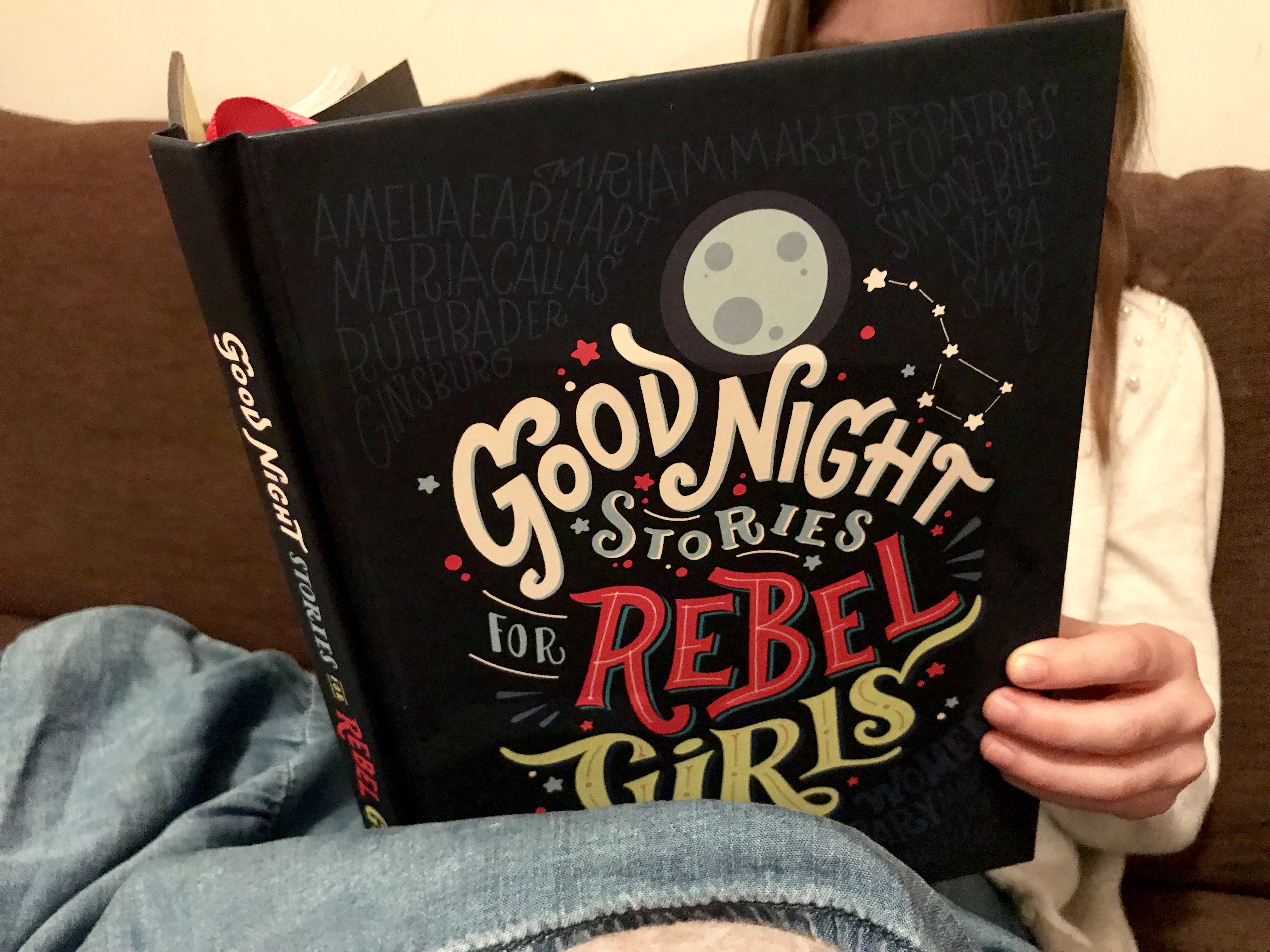 The only slight downside for me is the “for girls” element of the book’s title. I would hate for this to put off boys. I want my sons to read this book as much as I do my daughter. They have a sister; a mother; female friends and relatives. Perhaps one day they will be husbands of wives; fathers of daughters; colleagues of women. I want them to support the women in their lives to achieve great things as much as I want them to achieve great things themselves. So for this reason my boys are becoming as familiar with the women in this book as their sister.

And likewise when we receive Stories For Boys Who Dare To Be Different – a similar collection of stories about men who don’t conform to the stereotypical concept of masculinity – which I’ve pre-ordered ahead of its April 2018 publication date, it won’t be confined to just the boys in our house either.

Small gripe aside, this is a wonderfully-inspiring book that every girl should read. Who knows what it might inspire them to achieve.

You can buy the book here along with some other similarly inspiring titles.*

* Contains affiliate links. This means that I receive a small commission if you order via this link. It won’t cost you any more though.