A friend of mine recently became a mum for the first time to the most gorgeous baby twins. I asked her by text how things were going. Now usually when people ask this kind of question, the reply is the obligatory “great, really well, we’re really happy,” etc.

But this is how my friend responded.

“I’d like to say they’ve settled into a routine; allow us plenty of sleep and it’s all a piece of cake… but that would be a lie! Generally though they’re amazing, and despite the fog of sleep deprivation we seem to be muddling through ok!”

Maybe it’s because I’m already a mum, or maybe it’s because I’ve known her a long time, but I felt nothing but admiration for my friend that she felt she could be honest enough to say that as wonderful as new motherhood is, it’s not without its challenges.

The fog of sleep deprivation and trying to fathom out what your baby needs is challenging with one, never mind two. But it’s her phrase ‘muddling through’ that really struck me. Because isn’t that what most of us are doing when it comes to parenthood?

I know I still am – and that’s what I told her. My children are six, four, and two and muddling through is still my best philosophy.

When I became a mum to Little Miss E, almost six and a half years ago, it was the happiest moment of my life. However, I remember wondering how everyone else seemed to instantly know what they were doing when I was so unsure. It’s only in hindsight, I realised that they probably didn’t know either. It’s so easy to look at other parents and think they have it sorted; that you’re the only clueless one. Especially when every random stranger in the supermarket or the park feels the need to tell you what your child needs. “He/she’s cold/hungry/tired/hot,” they say when they hear a baby cry. You begin to doubt your instincts.

There were days in the beginning when I couldn’t even get myself dressed before midday, and my husband would come home from work and wonder why the breakfast things were still on the table. I used to wonder why I was so crap at this parenting thing compared to everyone else. I second guessed everything I did. Was I feeding her too much, or not enough? Was a routine a bad or a good thing? Was she over-stimulated or under? Were her nappies normal? Could you cuddle a baby too much? How many layers should she be wearing? I had never done this before and I had no idea.

But, the more I was honest with my friends, the more I realised that most of us are winging this parenting thing. And there’s nothing wrong with that.

People quite often presume that because I have three children, and I have both genders, and I write about parenting, that I somehow magically know what I’m doing. Ha! If only! Believe me, I don’t! Granted, I’m a lot more confident third time around and there are things that phased me at the start that don’t worry me now. But I have days, lots of days in fact, when this parenting thing baffles and frustrates me. Each new stage brings fresh new challenges that you’ve not come up against before. Just when you think you’ve cracked a it, your child has a developmental growth spurt and everything changes again.

And if you have more than one child, you’ll soon realise each is different to its siblings and brings its own fresh challenges too.

Although I parent my three children similarly for the most part, sometimes I need to do things completely differently with each of them. What works for one, won’t always work for another. I am continually working this out, growing as a parent as my children grow. Muddling my way through, figuring it out as I go along.

I notice it when readers of my Cardiff Mummy Says Facebook page message me with questions about parenting. On toilet training, for example, or a child who doesn’t want to clean their teeth, to give but two recent examples. The very thing that one mum says is her saviour often didn’t work for someone else’s child.

There really are no hard and fast rules when it comes to parenting. Ask other parents, read the books and the parenting forums. Sometimes you just have to go with your instincts and see where it takes you. Try something out and if it doesn’t work, then try something else.

But never be worried that you are muddling through motherhood – because I promise you, the rest of us are too. 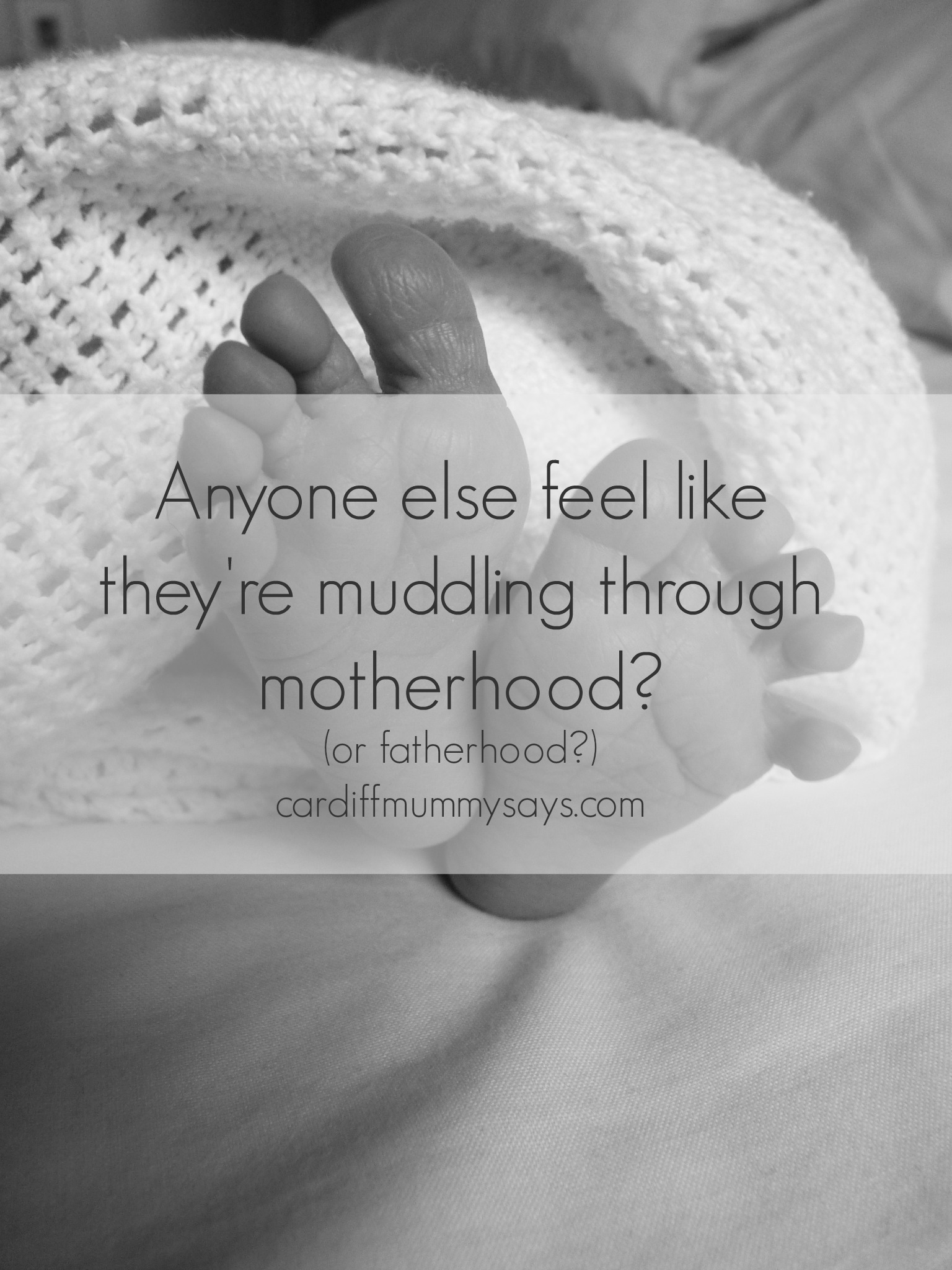 Can you relate? Do you sometimes feel like you are muddling through parenthood? Let me know in the comments section below, on the Cardiff Mummy Says Facebook page or by tweeting me on @cardiffmummy