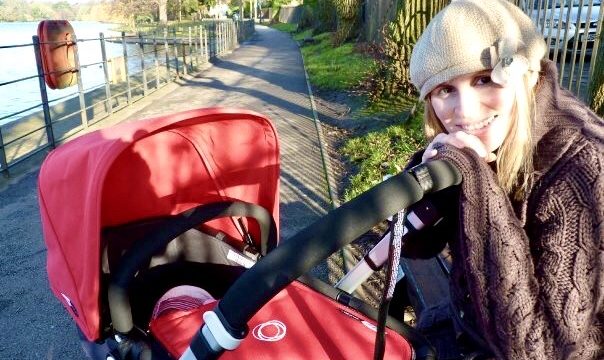 This photo popped up in my Facebook memories recently. I remember the day so well. My daughter, our first baby, was a week old and it was our first proper trip out away from the house as a family of three. Those of you who live in Cardiff may recognise this as Roath Lake, a popular beauty spot in the north of the city which is perfect for walking around.

I probably look like any first time mum here, shiny new buggy, tired eyes, that glow of new motherhood. My husband and I had navigated leaving the house in between feeds and nappy changes, worked out the car seat and how to get the buggy in and out of the car. We’d worried whether our baby was too warm or too cold, how many layers she should be wearing, all the usual new parent things.

The reason I remember this day so well is partly due to how much pain I was in. I’d sat down on pretty much every bench as we walked around the lake, with an awful ache in my nether regions. It felt like someone had been repeatedly kicking me in my lady bits. I had to go to the loo three or four times while we were there; there was no chance of holding anything in; it felt like my pelvic floor muscles had left my body with my baby.

As a first-time mum I thought this was how everyone felt after giving birth. But actually unbeknown to me I was suffering with pelvic floor damage caused by a difficult birth with a back-to-back baby doing her best to turn around during the course of 24 hours of contractions, an overlong pushing stage where it turned out the umbilical cord was wrapped around her so that as I pushed it pulled her back in, and the eventual requirement of the use of forceps and many stitches. In the weeks after giving birth, my groin area continually ached, I couldn’t sit down comfortably and as I discovered that day, I couldn’t walk for more than a few paces without needing to sit either.

As I say, I thought how I was feeling was how all new mums felt. (The birth of my second and third children made me realise it definitely wasn’t.)

Around six weeks later I attended a group hospital session for new mums. I’d only really gone along because I had nothing else to do that day, but I’m so glad I did because listening to the health professionals talk about pelvic floor health made me realise I had a problem.

As all the other mums left at the end of the session with their babies, I felt so embarrassed approaching one of the midwifes. “I think I might have an issue,” I said. Then and there she made an appointment for me to see a women’s health expert in the physio department of UHW a few weeks later.

What followed was a diagnosis of pelvic floor damage on one side, caused by the difficulties of the birth. But thankfully it was treatable.

What ensued was months of intense pelvic floor physio, internal probes, electronic devices to stimulate the muscles, exercises to practice at home. Every week a tiny bit of me died with embarrassment at having to have my most intimate parts examined.

But the physio I was seeing was so caring and kind, putting me at ease and ensuring I felt cared for and listened to. Her whole job was helping women with pelvic floor issues, many of them after giving birth, not to mention bowel incontinence (read more from a Cardiff mum who has experienced this and the medical and emotional support groups available here).

While pregnant with my second child, I felt the same issues occurring again and so after my son was born, I embarked upon another intense round of pelvic floor physio.

Third time round things felt good and I didn’t need the physio, but I was religious about doing my pelvic floor exercises during pregnancy and after birth.

Well, because I have had three conversations so far this year alone (and goodness knows how many times over the years) with women relating to pelvic floor issues. Mums who joke about not being able to go trampolining with their kids because they’d pee themselves, or mums who can’t cough or sneeze too much because it could lead to a little leakage, mums who routinely use a Tena Lady when they go to the gym or when they run (this is a great article about urinary incontinence among female runners). Most of the women I have had these conversations with aren’t new mums; their children are around the same ages as mine. Many women suffer in silence for years, decades, a lifetime. You may remember back in 2016, Nadia Sawalha saying that she has suffered from incontinence for 13 years, since her daughter was born.

My response whenever the subject comes up with friends is always the same: just because this is common, it doesn’t mean you have to put up with it or that it’s ‘normal’. There are medical practitioners available who can help you physically and support you emotionally; please don’t be embarrassed about asking for it.

I’ve always been really honest with people I know about my experiences, as embarrassing as it is, in the hope it will hope other women. I’m fortunate not to have any issues now, so it’s proof that the support and treatment can work. I can trampoline, laugh, cough, sneeze, run without that constant fear.

That said, I worry as I get older and my body goes through more changes that that could change, so I keep up with my pelvic floor exercises. My advice is to make them part of your daily routine; do them while you’re cleaning your teeth or after you’ve used the loo, for example.

Around one in three women experiences issues of bladder incontinence (you can read about the different kinds of incontinence on the NHS website here). That’s a huge number and it amazes me firstly what a taboo subject it still is and secondly that more routine support is not given to post-natal women. In contrast, all new mums in France are signed up for a series of routine “pelvic floor re-education classes” and, as this article explains, there isn’t anywhere near the same issue there.

This is the first time I have spoken about this on my blog and I’m scared about putting myself out there so publicly.

But if it means even just one woman (or even just one man, because although I have aimed this article at mums I know it can affect men too) realises she doesn’t have to suffer in silence, makes an appointment with her GP and gets a referral, then it’s worth the embarrassment.

Thanks for reading, Please do help me reach more women by giving this article a like or share on social media so that it continues to show up in people’s social media feeds.