Life is split into two types of people. Those who look at the pictures on this page and say “Oooh goody! A big basket of ironing for me to get cracking on with,” and those who say “Not a bloody chance, mate. That’s all going straight in the drawer because I don’t iron and haven’t ironed a single thing for seven years and I don’t intend to start now.”

Actually, there’s probably a third category of people who pay someone else to do their ironing – a cunning plan to fool the world into thinking they wouldn’t leave the house in anything less than perfectly pressed clothes when really it’s just that they have more money to spare than the rest of us.

Even if I had the money, I’d still be firmly in the first camp. Oh, I love to iron! I really do! After a massive washing session earlier this week, which saw seven loads going through my machine in two days, I ended up with the basket pictured and another one that looked the same. I know that prospect would make many people groan at best at the task ahead, or shove everything into cupboards and drawers still creased at worst, but an overflowing ironing basket is a welcome delight for me. 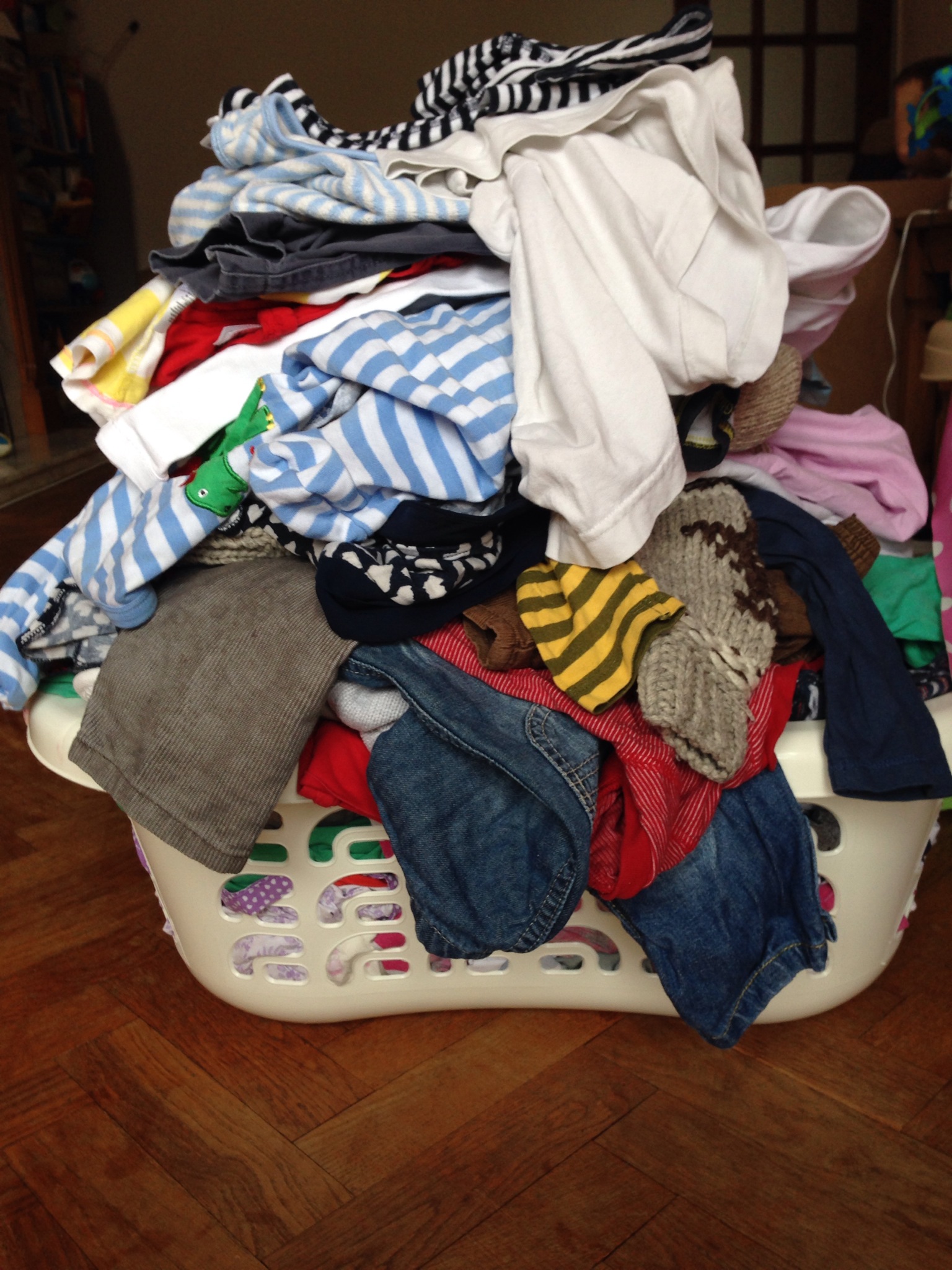 How does this big basket of ironing make you feel?

I love the steam, I love the water squirter and I love the way the creases magically disappear. I find it all so therapeutic. That action of the metal plates gliding backwards and forwards; it’s like watching a scrunched up piece of paper magically transforming into a beautifully smooth canvas. It’s so calming.

And you can do it in front of the television! What other category of housework can you do whilst simultaneously catching up with whatever series you’re watching on Netflix? You can’t clean the bathroom and watch Breaking Bad at the same, can you now? And if you were vacuuming while watching the Bake Off, you wouldn’t hear a thing.

Cardiff Daddy is not impressed with my passion for ironing. He thinks it’s a waste of time. He even tries to sneak things out of the ironing basket and into his wardrobe. But I always know and when he’s not at home I’ll just go straight back up and get them. “But it’s only a t-shirt I wear to bed,” he’ll tell me. “Yes, but wouldn’t you sleep so much better in smooth clothing?” I’ll reply. “The duvet cover is so nice and crease-free, so are my pyjamas. Surely you don’t want to be the odd one out?” I think he does it to annoy me though. He never complains if he comes home from a night out and I’ve ironed 15 of his shirts.

It’s not a new passion of mine, either. At university, I would regularly iron the shirts of my male housemates. There’s no way I’d be seen in public with people wearing creased shirts! Even if we were students. I went away to university with my very own brand new iron, a leaving-home present from my brother – how well he knew me! It had its own little place on the shelf in my student bedroom. There was no way I was letting it live in the communal kitchen. My housemates thought they were the ones getting the good deal by not having to iron their own shirts but, let’s face it, I was the real winner.

Even before that, I remember at secondary school, ironing my own uniform. In fairness, my brothers did theirs too – it definitely wasn’t a girl thing in my house. My dad loves ironing a lot more than my mum, in fact. Apparently we get it from my dear grandma, his mum. When Grandma was alive, she would iron anything she could get her hands on – socks, pants, tea towels, dishcloths, the lot. She had five children, so you can imagine how much ironing she had. I’m not quite as bad as she was – but if I didn’t have three young children to look after every day, and a job that I do mostly in the evenings, then I most definitely would be.

I’m equally as pernickety about hanging out washing. Whether it’s on the airer or the line, clothes must be hung out by person, and by type of garment. All a person’s t-shirts go next to each other; all their socks are paired up.

Beautiful! It makes it so much easier when it comes to putting washing away if everything is properly ordered at this stage. On the line, pegs must go under the arms or on a seam so that any marks they may leave are hidden. If a garment needs two pegs, then obviously they have to be the same colour. Even better if every garment of a person’s clothing can have the same colour pegs. Woe betide anyone who gets it wrong; I will re-do it! I know, I know; it’s petty and a waste of time. Half of you out there are laughing at me, thinking I am the saddest person you have met. But I promise you, washing and ironing makes me happy – and you wouldn’t want to deny me my happiness, would you?

Unfortunately, I’m not so big on cleaning at the moment. Part of that is because, as I mentioned, I have three young children and while I am cleaning up in one room, they are emptying the contents of the cupboards in another, so it’s a fruitless exercise. There’s also the fact that the house we live in needs a fair bit of renovating and redecorating so no matter how much I clean and scrub, the carpets and floors still look shabby and dirty. Where’s the satisfaction in that? I know things will change when we finally come to redecorate.

In the meantime, I still have my beloved ironing. Because no matter what’s going on in other elements of my life, no matter how out of control I may feel about things I can do nothing about, I can always smooth away the creases and have perfectly pressed clothes.

Now, you must excuse me, I’ve got a basket of creased clothes begging for my attention.

What do you think? Can you relate to my love of ironing or do you shudder at the thought? I’d love to hear your thoughts.