One more sleep, as my children would say. One more sleep until I take on the biggest physical challenge of my life (so far). Tomorrow morning at 7am I’ll be setting off on the Vale of Glamorgan Ultra Marathon; the VOGUM as it’s known. I’ll be one of around 150 taking on the 40-mile distance that follows the Wales Coast Path from Porthcawl to Penarth, via Merthyr Mawr, Ogmore, Southerndown, Monk Nash, Llantwit Major, Rhoose, Porthkerry and Barry Island.

‘Why?’ you might well ask. Well, why not?! VOGUM has been on my mind ever since I had the privilege to run with local endurance athlete Rhys Jenkins last summer when he became the fastest person to complete the 870 miles/1,400KM Wales Coast Path. He did this in 20 days, 10 hours and 38 minutes. I’d never met Rhys before but came across him on social media and realised he would be running through the seaside town of Borth, in Ceredigion, while we were there on holiday. “Can I join you?” I messaged him on Instagram. “Sure,” he replied. My then-eight-year-old is a keen runner and was eager to join us too and so we ran with Rhys for around 8KM. When Rhys discovered my son was working towards his first 10K he told us to come and join him elsewhere on the route and run it with him. And so we rocked up at Porthcawl a week or so later and ran with Rhys and his supporters to Ogmore, with my son achieving not just 10K but 14. “This is part of the VOGUM,” he told me, referring to one of several local ultra running events he organises through his company Pegasus Ultra Running.

I’d always thought an ultra marathon would be out of my reach. How on earth could anyone run non-stop for that distance, I wondered. It turns out they don’t. Ultra running events, and especially trail ultra running events, are very different to the road running 10Ks and half marathons I had done previously. You don’t just pound the pavements as fast as you can to achieve a certain time; you run for a bit at a steady pace, you walk for a bit, you run a bit more, you stop and sit down. You eat. You might even have an ice cream en route. That’s not to say it’s not hard; of course it is. But it’s not as impossibly intense as I had mistakenly believed. Running with Rhys and his other companions, and hearing about their ultra experiences, got me thinking… maybe some day I could do this.

At that point, however, I was recovering from a really bad injury and was focusing on getting myself ready for London Marathon, which had been postponed from its original April 2020 date to October, and so I put it to the back of my mind.

London ended up being a virtual event. My injury wasn’t completely healed. I’d only managed to get up to 14 miles in training as a result. But as I was running for Tommy’s, a cause very close to my heart, I wanted to do my best to help raise awareness of and funds for the support they offer to those affected by miscarriage, still birth and premature birth, and their research which helps save more little lives. 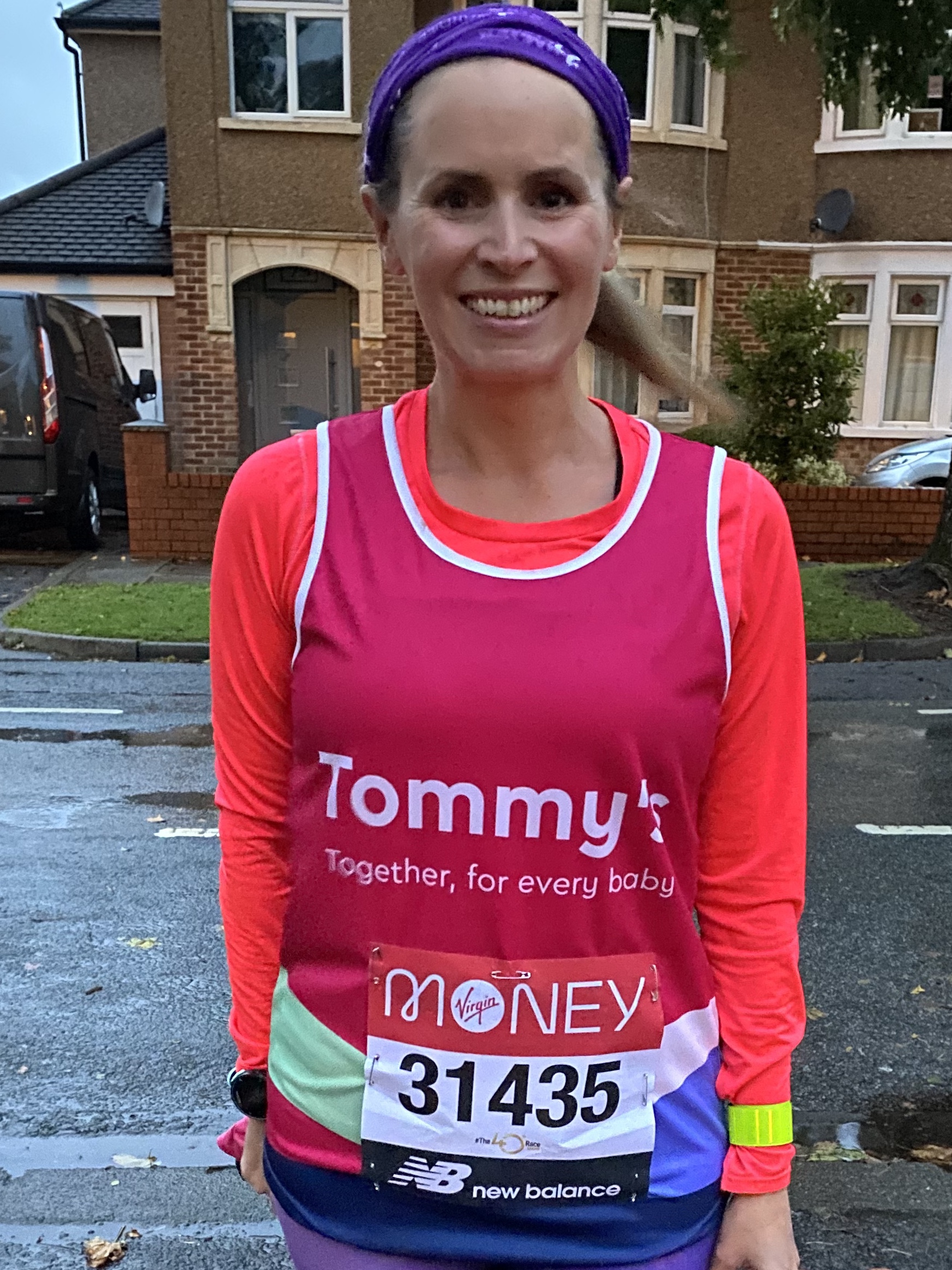 My physio gave me the all-clear to run, and so I ran around the streets of North Cardiff in the pouring rain with the support of some amazing friends, my children, my husband, and a few other children. It was hard, but it was great fun. When I set out that day, I had no idea if I would be physically capable of completing it; I’d told my friends and family that I would walk it if I need to. I would crawl it if I needed to.

Amazingly, I did it. I was a marathon runner!

I knew I had a place with Tommy’s for London the following year, which would give me plenty of time to get over the injury and focus on training. At that point I was glad I didn’t have to think about marathon running again for quite some time.

I had a quiet few months after London, focusing on rehabilitation and recovery to give myself the best chance of getting over my injury. I didn’t run distances of more than 7/8K for the rest of 2020.

I was missing having a goal to work towards though and so not wanting to push things and rtake on a distance-related challenge, in January of this year, I took on the Run Every Day in January (RED January) challenge. I ran 5K most days, although some days it was only 2 or 3. I ran in the rain, the bitter cold, the winter sun, and had my first experiences of running in the snow, which I absolutely loved. That half hour out of the house and away from the juggles of home working and home schooling helped me get through lockdown. I loved the mental clarity it gave me so much that I carried on the challenge into February… although by the end of the month I started to feel the injury pains creeping back and knew I had to rest.

I decided to scale back running to three or four times a week, rather than daily, and set myself the challenge of slowly upping the distance and completing a half marathon by the end of March.

I did it… and then thought ‘now what?’ It was more than six months until London Marathon. Should I stick at the half distance until then? Should I slowly increase by a mile or two a month? Should I take on another challenge?

I tentatively looked at the VOGUM… by this point, a few of my friends from my running club She Runs Cardiff had signed up… but it was all sold out. Ah well, I thought. It’s not meant to be. There were other ultra events organised by Rhys’s company Pegasus, but none of them gripped me in the same way as VOGUM did and I wasn’t quite confident enough to sign up for an event where I wouldn’t have anyone to run with. So, once again, I shelved the idea.

I know, I’ll do another marathon, I thought. By the end of May. But this time I’m going to run it on my own. And so that’s what I did. Nobody but my husband knew I was doing it. I dropped my children to school, ran 26.2 miles, picked them up…and then got dragged to the park, still hot and sweaty and in my running gear. The blog post I wrote about it is here.

With my second marathon completed, four months to go until London, and no idea if it would even go ahead given how turbulent the last year and a half has been, I kept on thinking about ultra marathons. Could I? Should I? VOGUM (which by this point been reschuled due to Covid) was sold out, but what about those other events?

And that’s when it felt like it was meant to be. Yes, VOGUM was sold out for its original date at the start of June but the postponement meant that some people couldn’t make it and so had deferred to the following year or opted for a different event instead. There were places available! Before I could change my mind, I booked my spot then and there. Oh crap. I’m really doing this!

I felt in a really good place when I signed up, having just run a solo marathon. But as things re-opened after Covid, life became so busy once more and my training suffered. I did what I could but it wasn’t easy, especially when the schools broke up for summer. I ran half marathons at 6am in the morning, getting home in time for my husband to get to work. I ran as soon as he got in through the door after work and while the tea was still cooking. 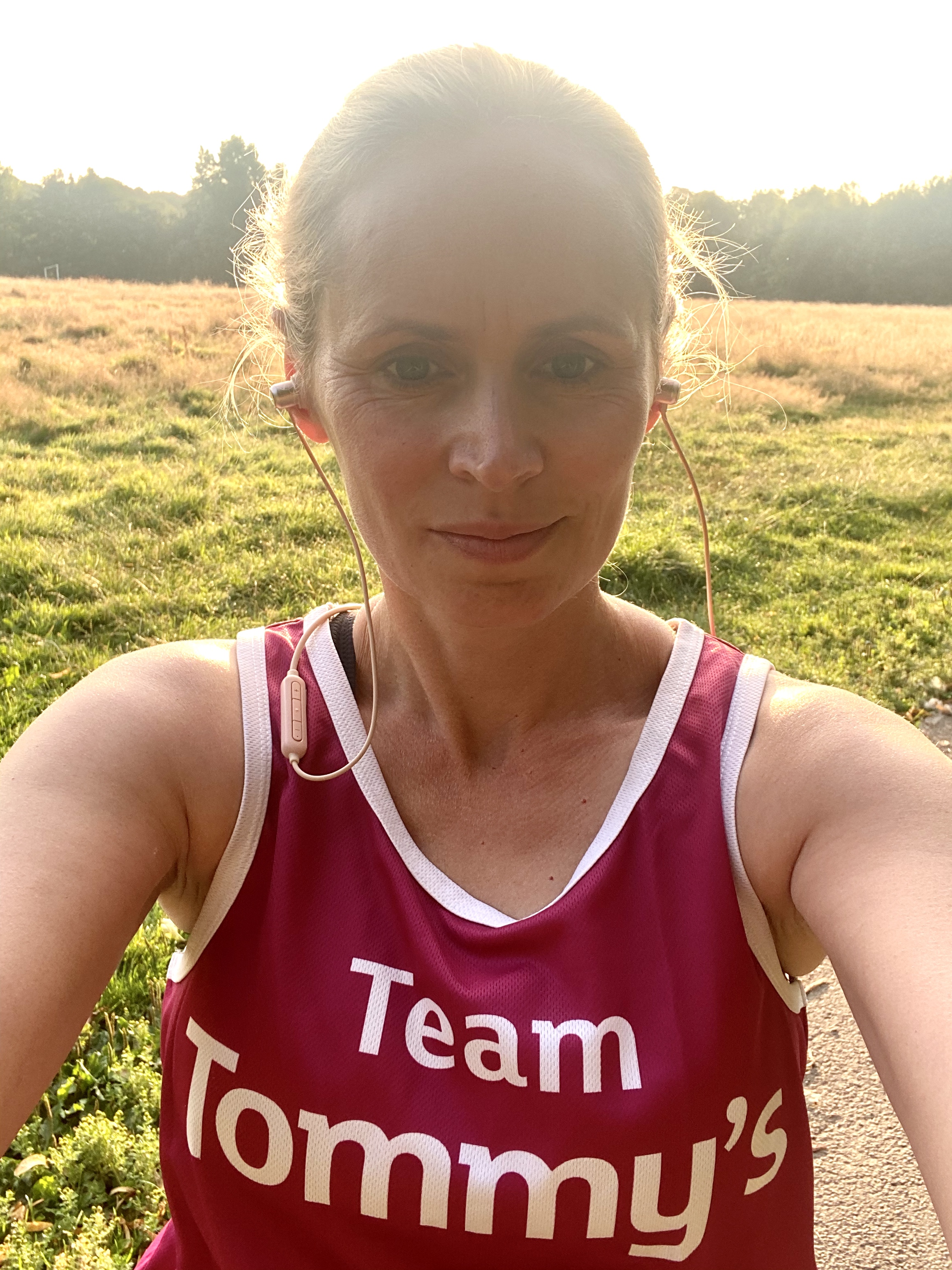 My last long run before VOGUM was on Saturday 14 August – I had the morning to get in as many miles as I could before we were due to go camping in the Forest of Dean that afternoon. I was out the house at 7am, and planned to do about 20 miles. I got to about 17 and texted my husband to see if I had time to make it to a marathon distance. “Go for it,” he said. “In fact, why not round it up to 30?” I called him to check he was sure. “Just do it!”. His support definitely helps make all this possible.

I was in tears as I finished, exhausted, shocked I achieved something I didn’t know was possible, thrilled I’d done it. My first ultra! 30 while miles! No medal, no finishing line. Just 45 minutes to eat, have a bath, and get in the car to go camping. Pitching up a tent is definitely not the ideal ultra recovery! You can see how exhausted I looked by the end in this photo. 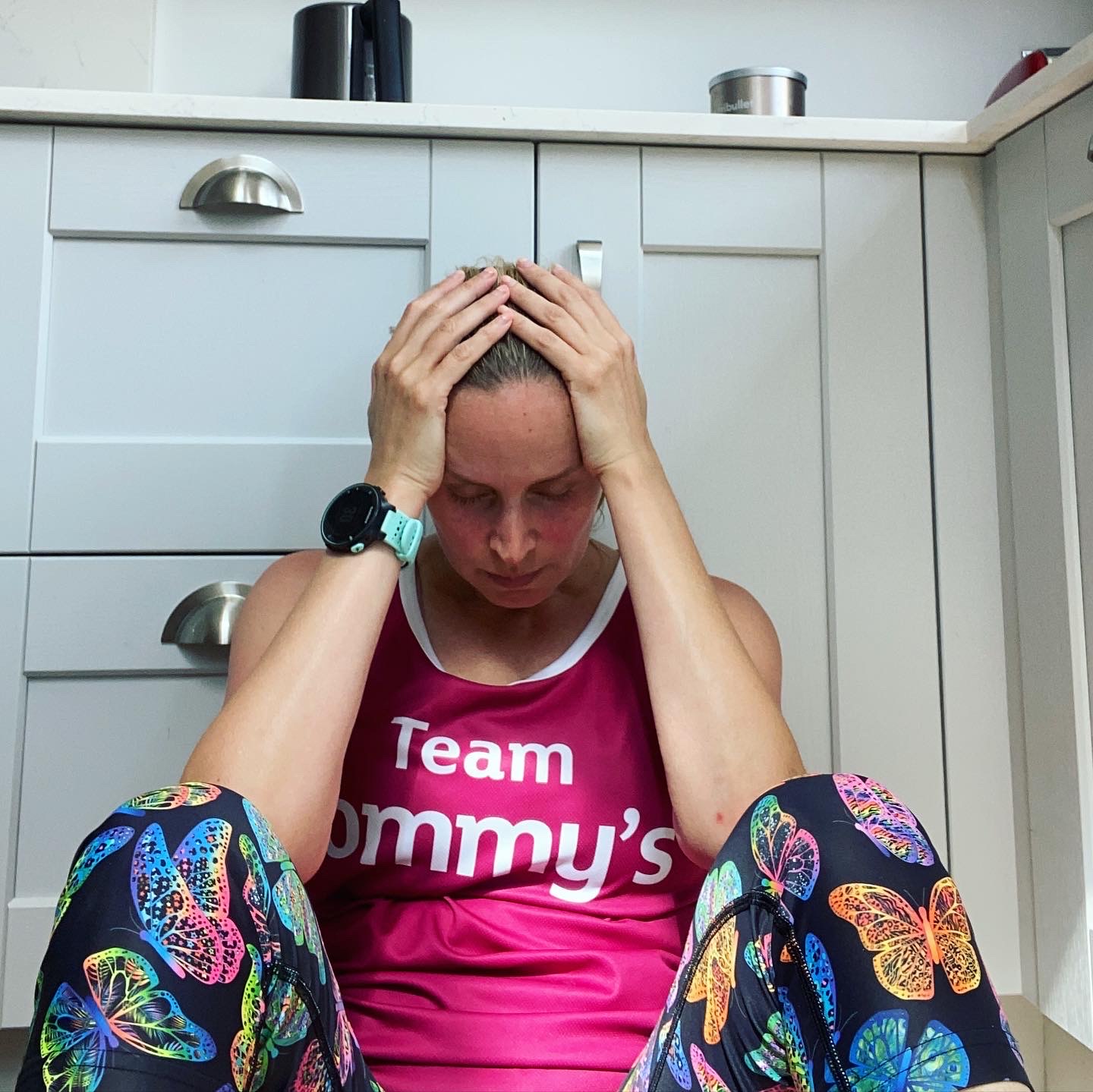 And so here we are the night before the big one. I’ve worked really hard for this. I’ve run – a lot; I’ve done 6am strength sessions at the gym; I’ve climbed mountains; I’ve done long trail walks with the kids. I have learned a lot about mental strength and resilience; digging deep and carrying on when you’re not sure if you can.

I am feeling all kinds of emotions at the moment. Scared, excited, anxious, terrified. Grateful I have friends from She Runs Cardiff to run it with. My kit is all packed. You need a lot of stuff for an ultra! I’m having an early night ready for an early start in the morning.

I’m going to do my best. I don’t have any expectations of times, other than it will be at least 10 hours. My only aim is to finish it and to enjoy it.

I’ll let you know how I get on.

You can support Tommy’s by sponsoring me here. All donations gratefully received.