When it comes to children’s theatre, you always know you’re going to get something special with Theatr Iolo. Out of the Blue, which I took my youngest to see way back in 2015, is a beautifully enchanting show for babies, while the heart-warming and imaginative Boxy and Sticky, which we also saw in 2015, remains one of my favourite shows I have ever taken my children to. In fact, my eldest two still talk about it. We’ve also seen two of their shows as part of the Sherman Theatre’s Christmas theatre programme for families. The award-winning company have been making shows for babies, children and young people for more than 30 years and they’ve certainly perfected the genre over this time, creating engaging and thought-provoking productions which captivate both children and adults alike.

This half term sees Theatr Iolo reviving a show it first staged in 2014 – Pen-blwydd Poenus Pete, a Welsh-language production which translates as Pete’s Painful Birthday. I didn’t see it first time around so can’t talk about how this new staging compares but, having watched the 2019 version today with my three children, I can confirm that it’s a highly enjoyable show, incredibly funny at times but with some important underlying messages for both children and adults too.

Written by acclaimed Welsh playwright Gary Owen and directed by Sion Pritchard, Pen-blwydd Poenus Pete focuses on a family of four – mum Beca, Dad Pete, and nearly eight-year-old twins Sian and Twm – plus their cat Cadi. As the twins argue over what to do about their pending joint birthday party, Dad says he doesn’t want to do anything to celebrate his the following day. The family take him at his word… but he’s angry and sad that he’s been forgotten and, helped by Cadi the cat, seeks his revenge in the most chaotic of ways.

At around an hour long, the show is a great length for children. It’s aimed in particular at those age 6+. My nine year old and seven year old were laughing out loud on several occasions, while my youngest watched the whole thing with the biggest grin on his face. 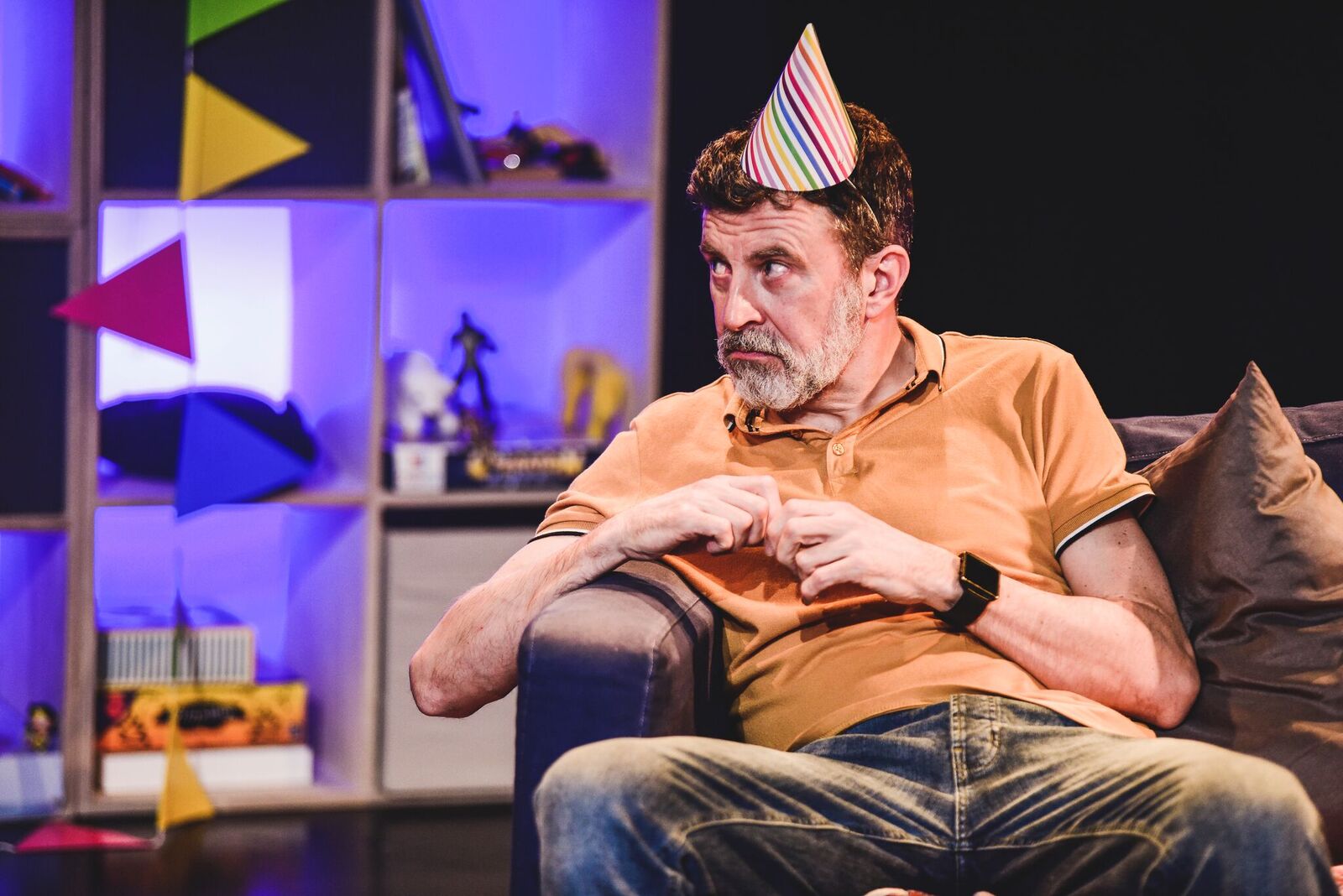 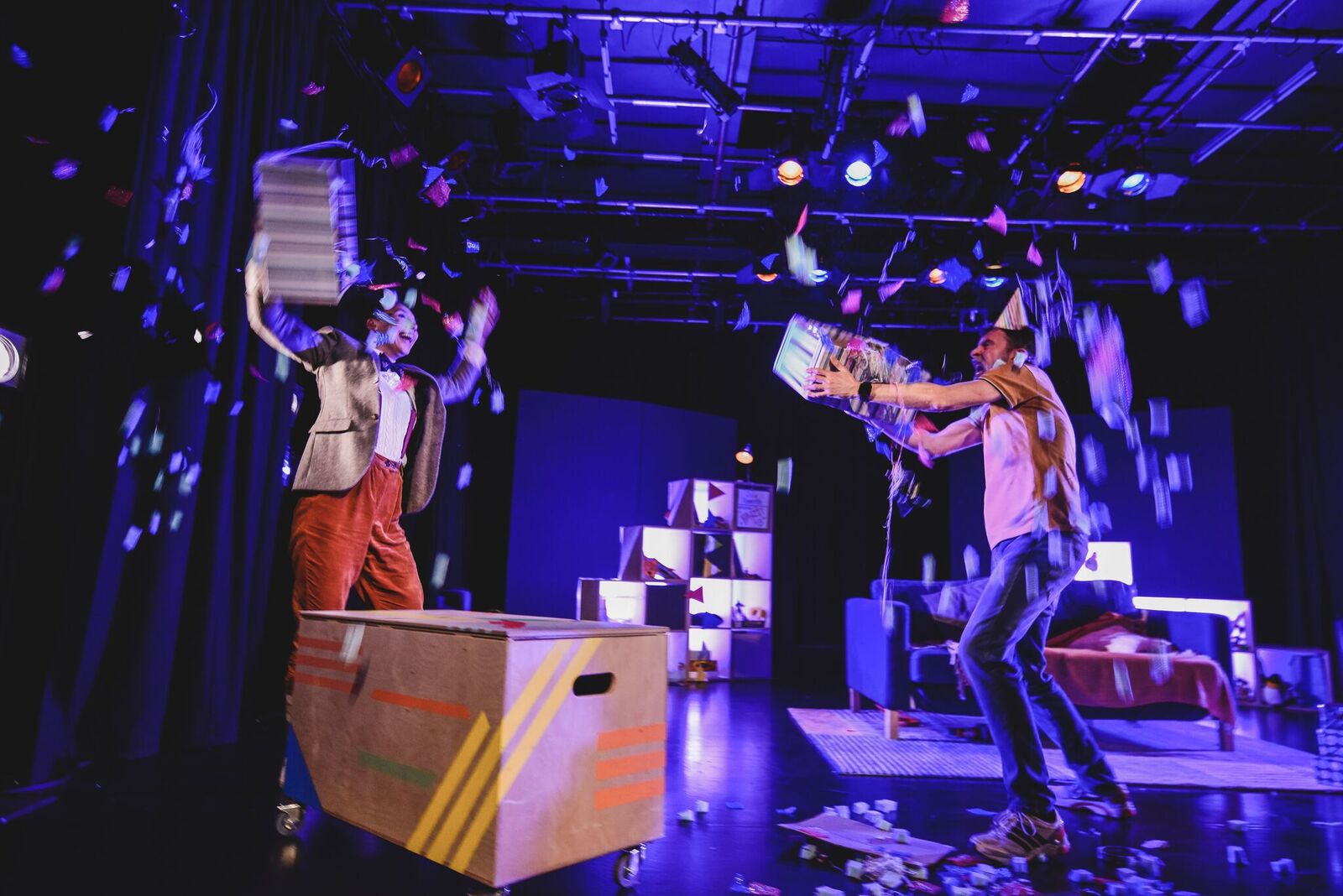 The show is performed in Welsh but Theatr Iolo are keen to appeal to families where the children attend Welsh medium education but one or both parents are learning Welsh. A synopsis and list of useful words are available both on the website and in the foyer. Dad Pete is a Welsh learner and occasionally gets confused over words and makes the odd English quip about elements of the language – it reminded me of my own English husband (who sadly couldn’t attend today).

The whole cast give superb performances. My children especially loved Mali Ann Rees as Cadi, while Elin Phillips (who we recently saw in Alice in Wonderland at the Sherman Theatre in December) as Sian and Iwan Garmon as Twm get that sibling relationship – where one minute they are arguing and then the next they’re best friends – down to a tee. 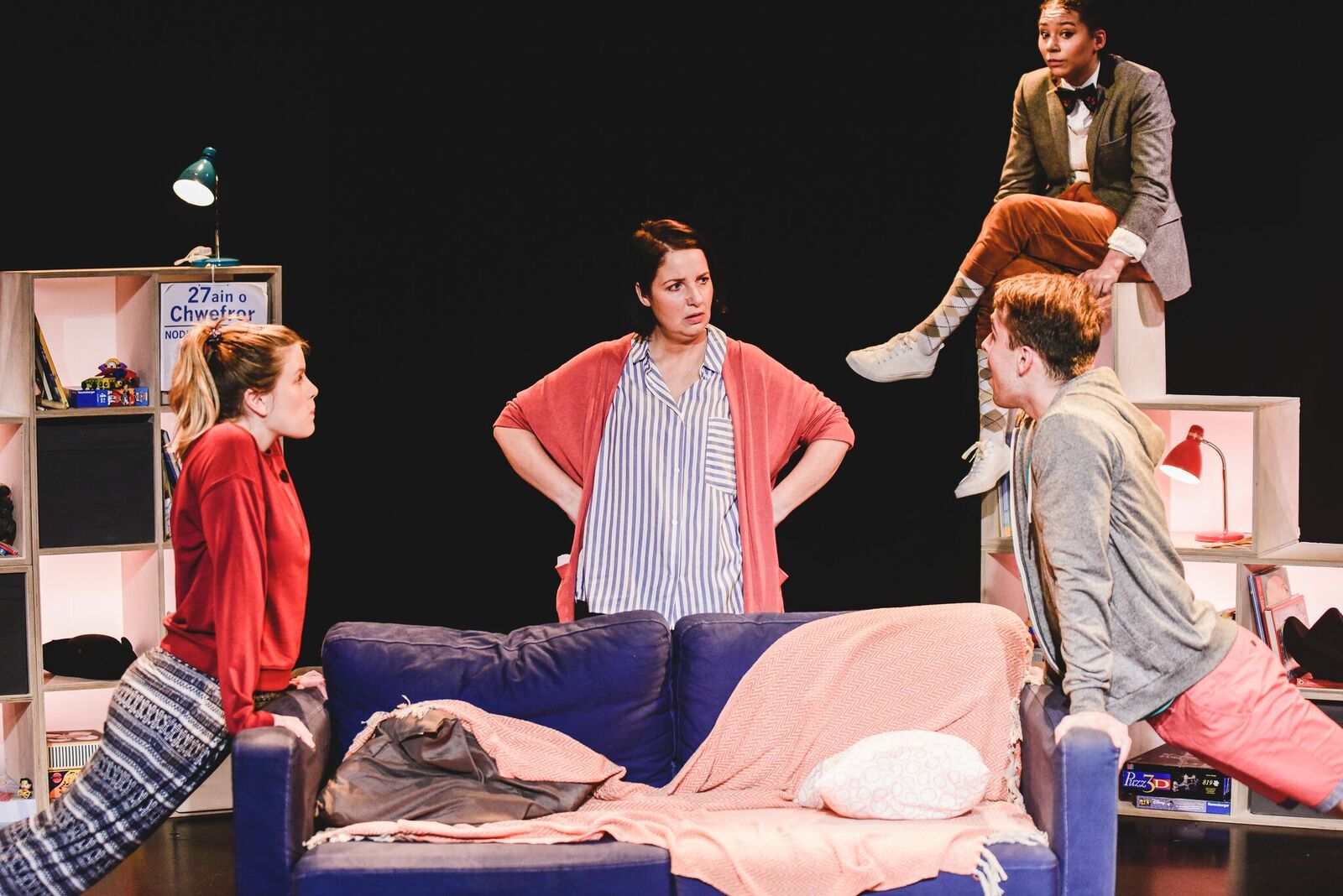 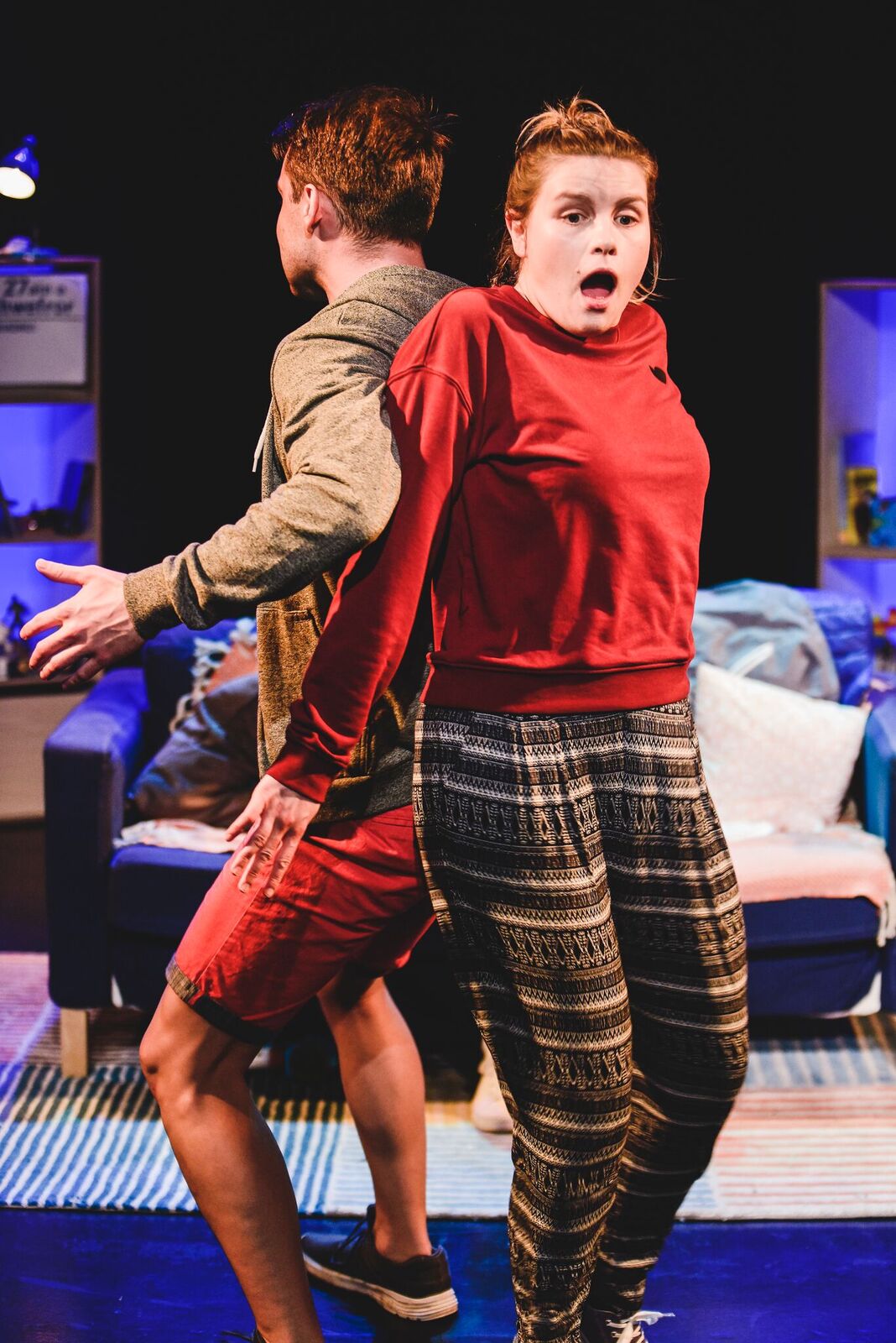 I’m sure a lot of mums will relate to the character of Beca, the under-appreciated mum, played by Crisian Emanuel and her feelings of being taken for granted. Her eye rolls and sarcastic quips made me chuckle with recognition. I’m also sure a lot of parents will see themselves in Pete, played by Richard Nichols, with his eyes glued to his phone. It’s amazing to see his relationship with his children change when he steps away from his phone… even if it is in the name of revenge. 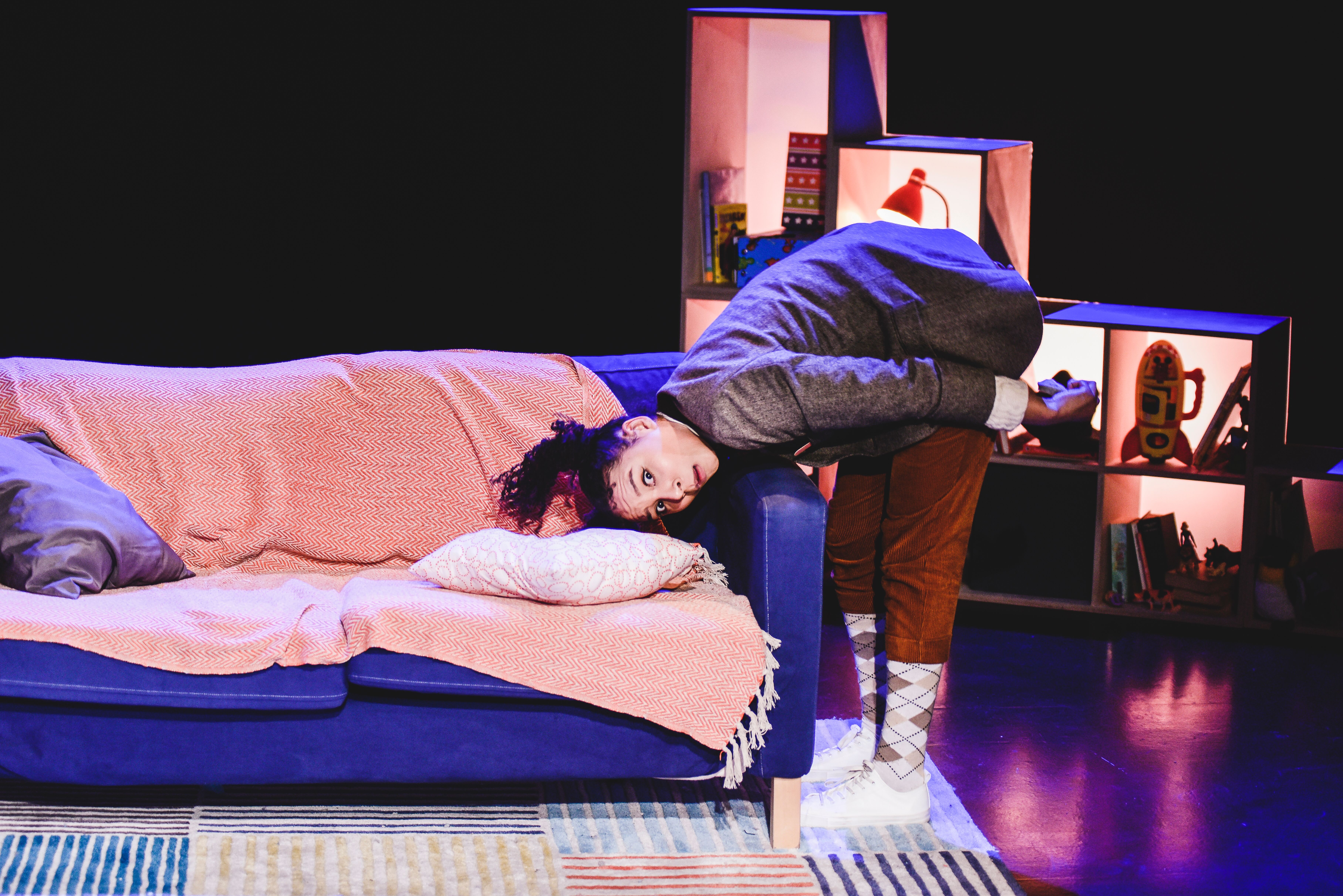 It might be a show for children but there are lessons here for the adults too, namely not being so engrossed in your mobile phone that you unwittingly agree to things you would never normally. And don’t say you don’t want to do anything for your birthday when actually you do.

Pen-blwydd Poenus Pete continues at Chapter Arts Centre, Cardiff on Tuesday 26 and Wednesday 27 February with performances at 11am and 3pm – book here. The show will then be touring – see the website for dates.