Like many Cardiff families, the Sherman Theatre’s family theatre productions are a highlight of our festive season. Each year the award-winning Cardiff theatre presents wonderfully imaginative stage adaptations of classic children’s books for children aged seven and above; and fun and engaging productions of fairy tales for those aged three to six.

This year sees two Hans Christian Andersen tales adapted for the Sherman stage with The Ugly Duckling (also being performed in Welsh as Yr Hwyaden Fach Hyll) catering for the younger age group (we’ll be reviewing that over the weekend so will let you know what we think), and The Snow Queen for the older age group, which we were invited to see on Tuesday night. 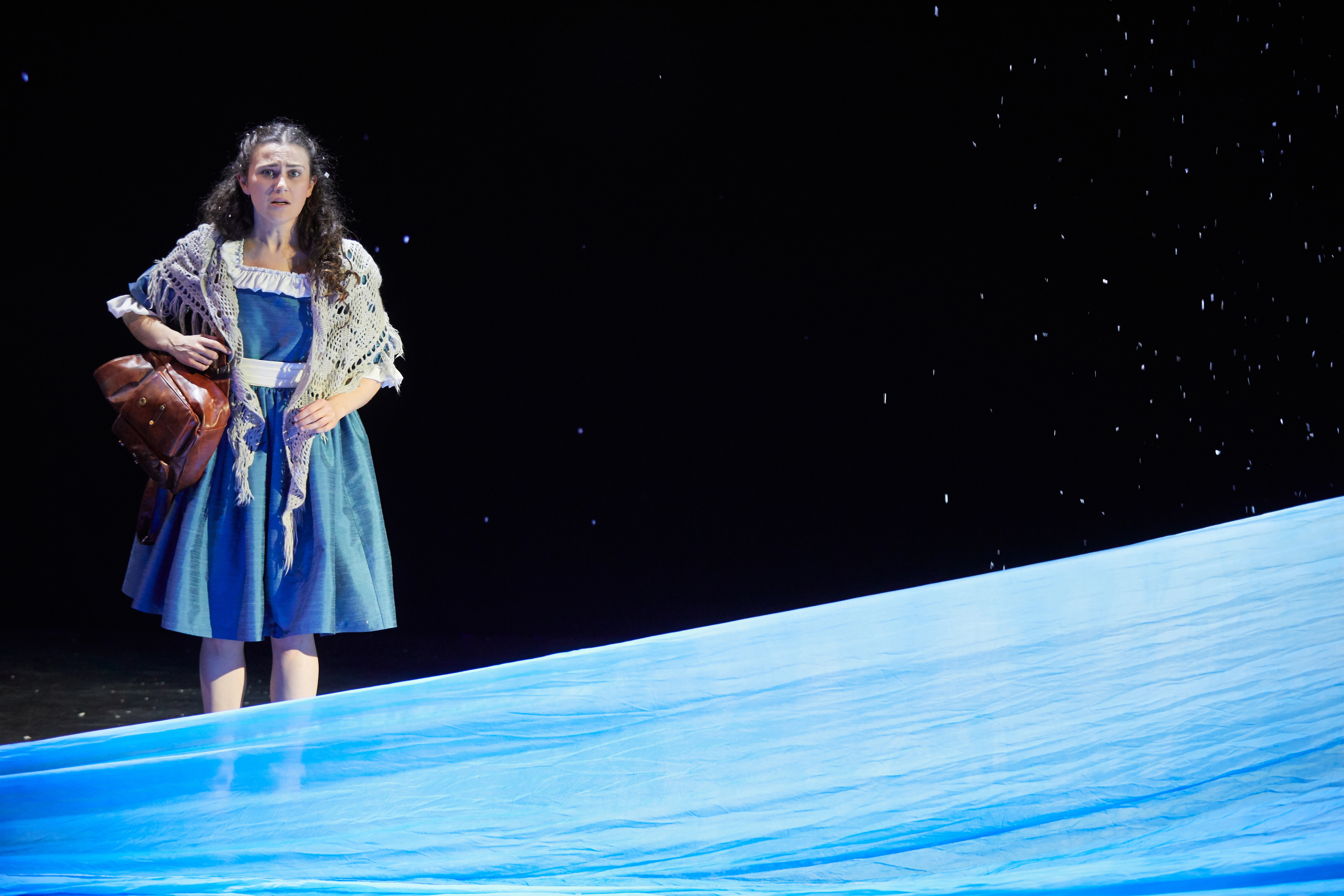 First published in December 1844, I remember reading The Snow Queen as a child. It was one of many stories contained in my much-loved beautiful hard-backed collection of Andersen’s most famous stories. My nearly 10-year-old daughter has also read it – she has her own beautiful hard-backed collection of his works. But my husband and sons aged eight and five knew little of the story, other than that the film Frozen is loosely inspired by The Snow Queen. However, anyone expecting a Disney-fest here would do well to leave those preconceptions at the door.

Yes, we have an epic quest through a snow-filled land, a charismatic reindeer, a frozen heart thawed by an act of love, and a few musical numbers interlaced among the action – but that’s where the similarities end. 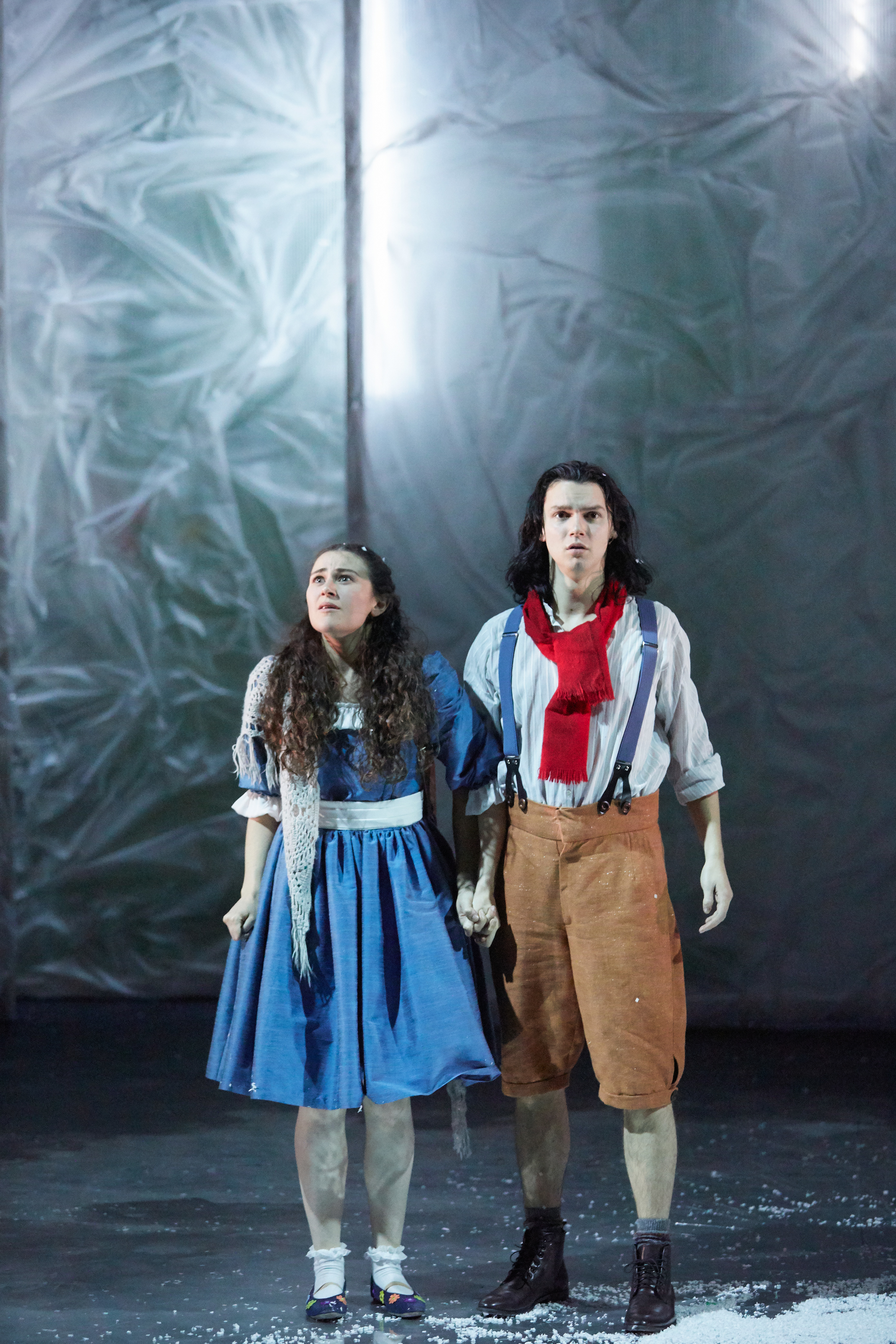 Conor Mitchell’s production of the Snow Queen is mysterious and chilling at times, lifted by touches of humour and lighter musical moments. As with previous Sherman Christmas shows, we see that children’s theatre can be edgy, ambitious, and even dark, and that underlying messages of righting one’s wrongs and helping those we love don’t need to be overly laboured to make their point.

The story begins in present day Wales, where a teenage babysitter and the slightly younger boy she is looking after (Grace O’Brien and Morgan Llewellyn Jones both in their professional theatre debuts) are snowed in. In the midst of a power cut, Grace tries to comfort, and entertain, the boy, with one of her grandmother’s old stories, also set during a snowstorm. 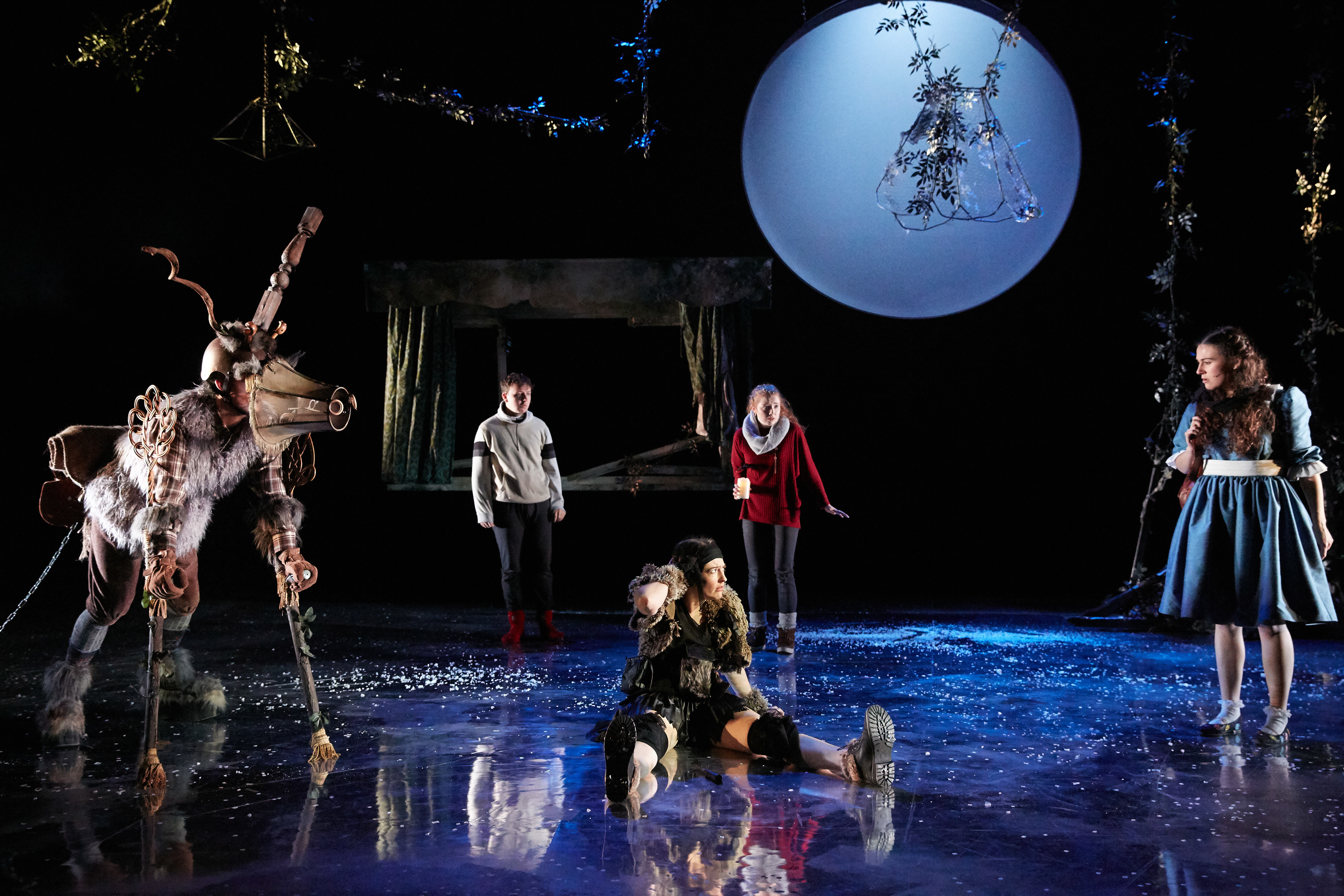 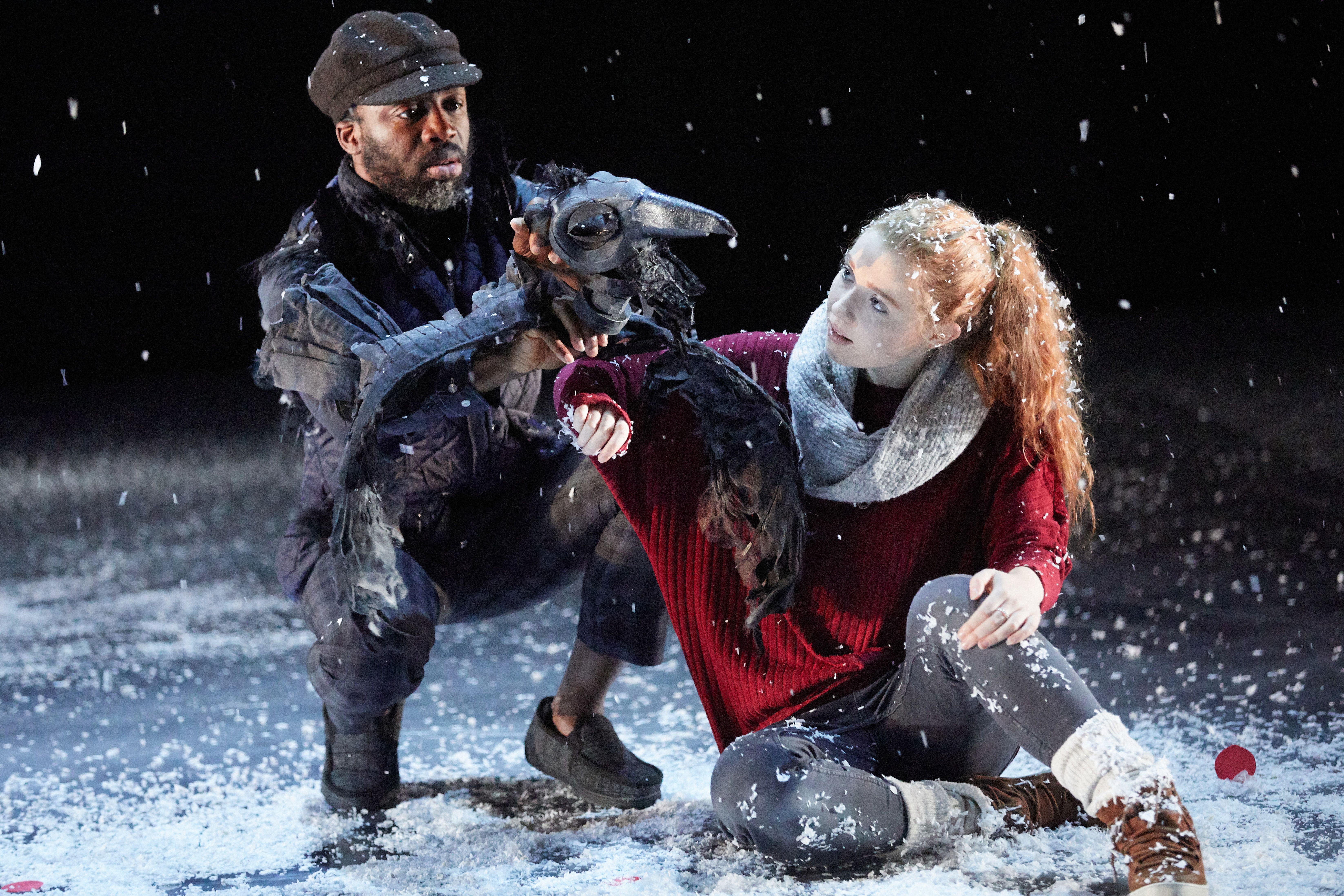 She tells of Kai (Ed Parry), a young boy with no family who lives with Gerda (Anni Dafydd) and her aunt (Hanna Jarman). An argument sees Kai running away in favour of a new life with the Snow Queen (Stephanie McConville), whose ethereal voice echoes around the stage, and Gerda’s journey to rescue him.

Along the way we meet a host of intriguing characters – Rachel Nottingham’s Mrs Gardner and her flowers, all full of personality; Hanna Jarman’s robber girl who wants to keep Gerda as a pet; Julian the reindeer (brilliantly maneuvered by apprentice actor Callum Lloyd); and Crow, puppeteered by Jo Servi, a very watchable performer not only here, where his whole body takes on the crow’s mannerisms, but also as one of the charismatic flowers. My children liked him a lot.

All of them help Gerda on her voyage of self-discovery just as much as she helps them with their own revelations on life.

I loved the way the two stories unfold in parallel, with both sets of children on the stage together, and their narratives cleverly interjecting at times as the initially indifferent boy becomes more involved in the tale, as he realises the parallels with his own life.

The set for the most part is simple, dark and bleak. It’s completely different to the Sherman’s family shows of recent years, such as Alice in Wonderland, The Wind in the Willows and The Borrowers, and their awe-inspiring stages. It took me a while to get used to this, I must admit. But anything too intricate or bold wouldn’t have suited the tone of the production.

Snow falls constantly against the black backdrop and the only real colour comes with Mrs Gardiner and her flowers. The costumes and props are creative and wonderfully random – an oversized lampshade becomes a boat. Another lampshade and a table leg help make up the reindeer. The long white drapes which make up the ice castle are imposing. 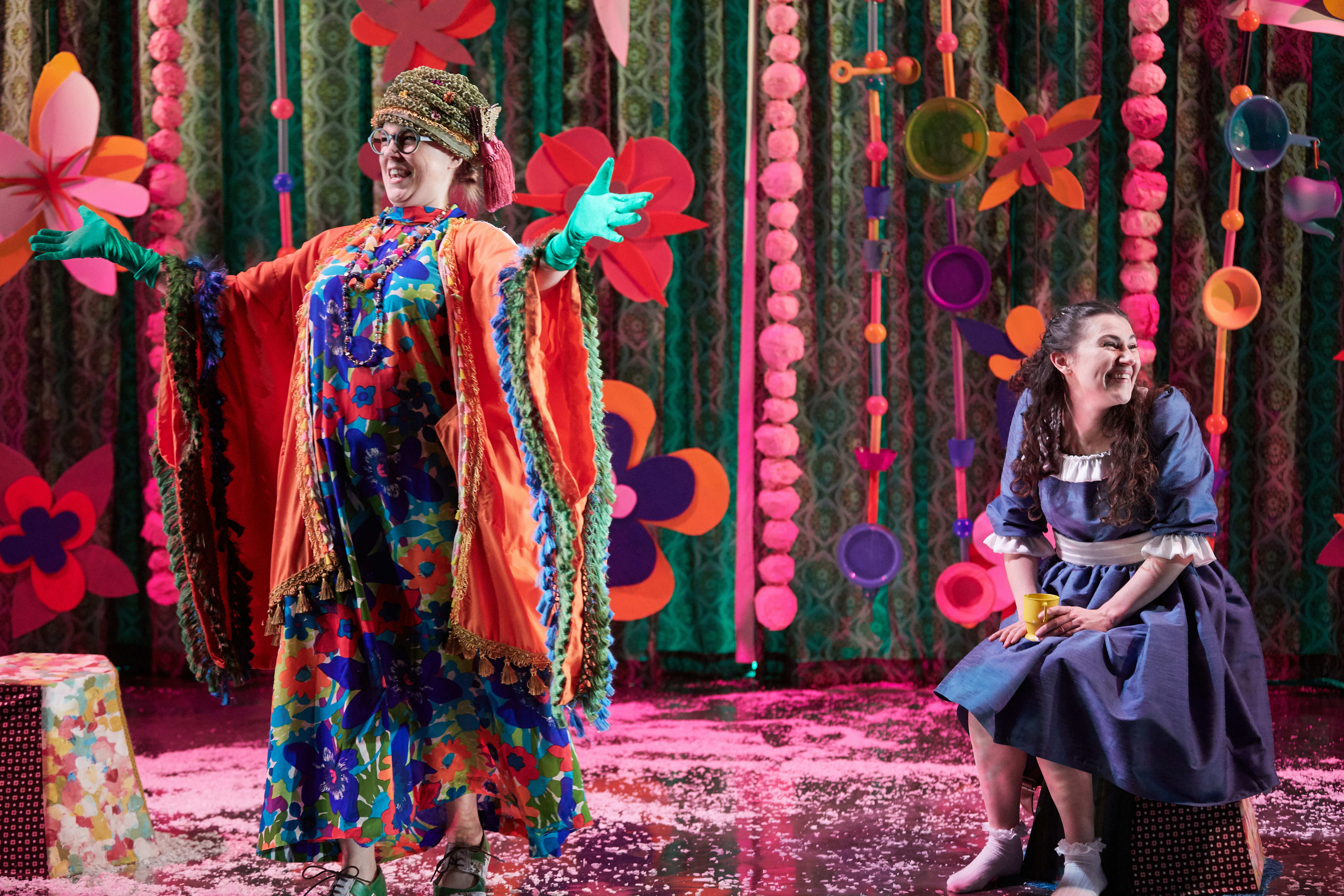 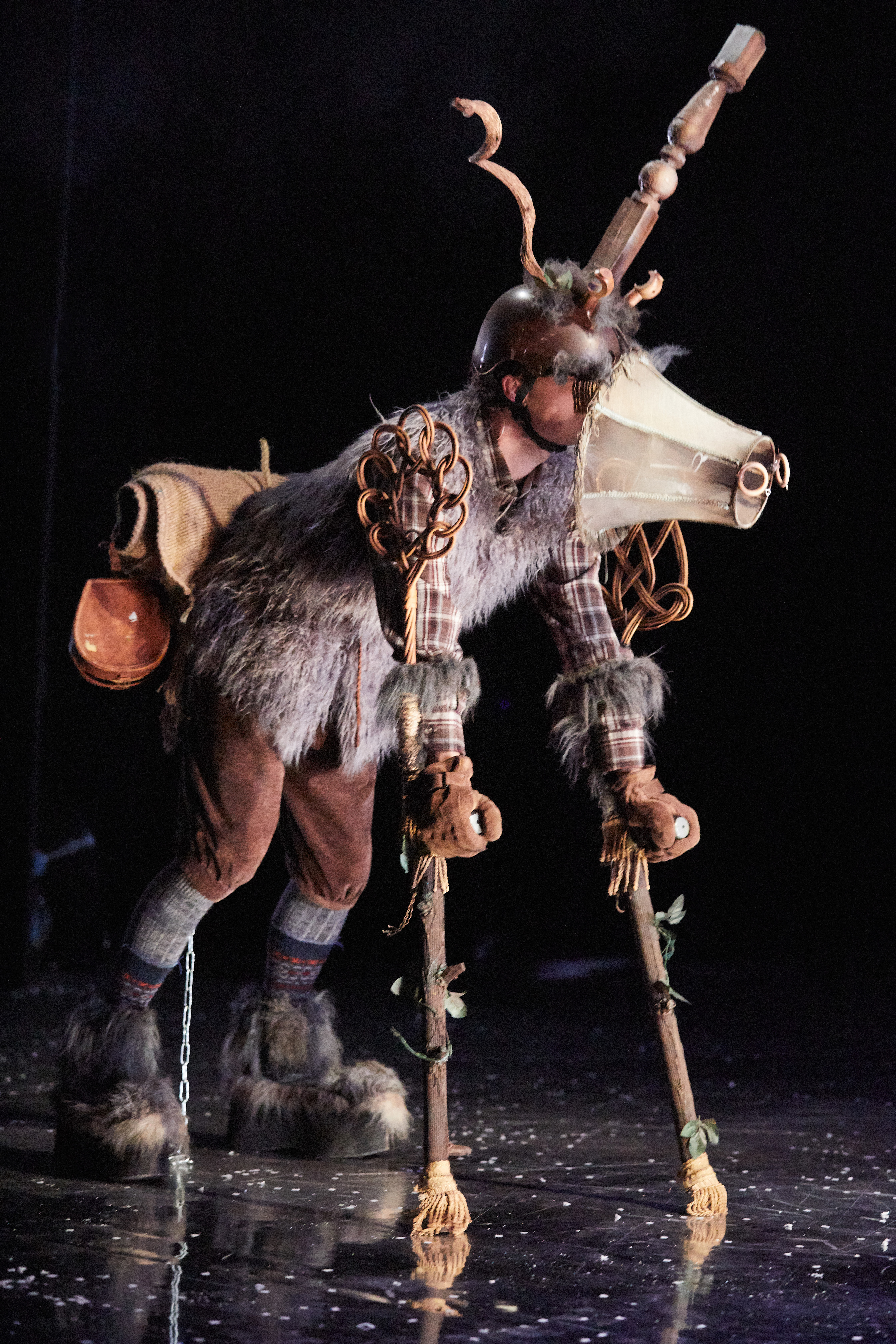 Mention must also go to the music which does so much to evoke tension and emotion. The piano, played by Mitchell, at the side of the stage is ever-present but never over-bearing, subtly amplifying the drama in the same way as a film score. At times, other musicians wander on and off the stage, as the cast perform several musical numbers.

The age guidance is 7+ although I would say this depends on the nature of the child. My five-and-a-half-year-old remained engaged throughout the show (he is a regular theatre-goer), but some of the finer points were lost on him. I know my daughter, who is a lot more sensitive, would have found parts of it scary when she was seven.

The Snow Queen is very different to the last few years of Christmas shows at the Sherman. It moves slowly to begin with but it’s a production that has kept us talking since as my children try to unpick the various plotlines and ask to know more about the original story.

As I said earlier, leave your preconceptions at the door and fall slowly into this mysterious and enchanting world which shows that children’s theatre can be challenging and deep, and work on many different levels.

The Snow Queen is at the Sherman Theatre until 31 December 2019. Tickets cost from £16-£26 for adults and £8 to £13 for children. For more information, visit the Sherman’s website here.

Homepage » Cardiff » A review of The Snow Queen at the Sherman Theatre, Cardiff

1 Comment to A review of The Snow Queen at the Sherman Theatre, Cardiff