A shark swimming over our heads and a giant clam opening and closing. A dinosaur roaring and prehistoric creatures swimming. Waterlilies sprawling out across the floor and Mozart talking to us from a bridge.

This is National Museum Cardiff like you have never seen it before thanks to its new Museum ExplorAR augmented reality interactive experience which brings to life some of its most popular exhibits.

Launched last week visitors can hire a hand-held electronic device for £10 an hour and journey between three separate galleries where modern technology will allow them to appreciate history in a completely different way.

We were invited to put the AR experience to the test earlier this week as part of our role as family blogger ambassadors for National Museum Wales. Here’s how we got on.

The handsets cost £10 to hire for an hour from the museum shop with a total of 15 available to visitors. We were lucky to be given one each in order to write this review. However as a family with three children I was pleased to see the devices are hand held rather than goggles that need to be worn meaning you could easily hire one per family. £10 seems quite a reasonable charge for this especially given the museum is free to visit.

Those hiring the equipment need to sign a safety disclaimer form making it clear they understand that they need to pay attention to their surroundings while using the AR handsets. It would be quite easy to become so absorbed in what you are witnessing that you bump into people or exhibits.

The AR experience is available in English Welsh and Japanese and can be used in three galleries. An on-screen map shows you how to get to the starting point of each experience with large signs in the galleries themselves making it clear where you need to begin. It’s a simple machine to use with on-screen touch technology and we had no problems using it.

We began our interactive experience upstairs in the museum’s Natural History gallery. Here the manatee skeleton that sits at the front of the museum became a moving creature while jelly fish and a squid swim overhead.

One half of a giant clam shell sits encased in the middle of the museum floor – but the technology shows you how it would have opened and closed with its other half.

As we followed the green arrows on the screen to the humpback whale skeleton a shark swam over our heads. My children thought this was amazing and spent ages following him around. 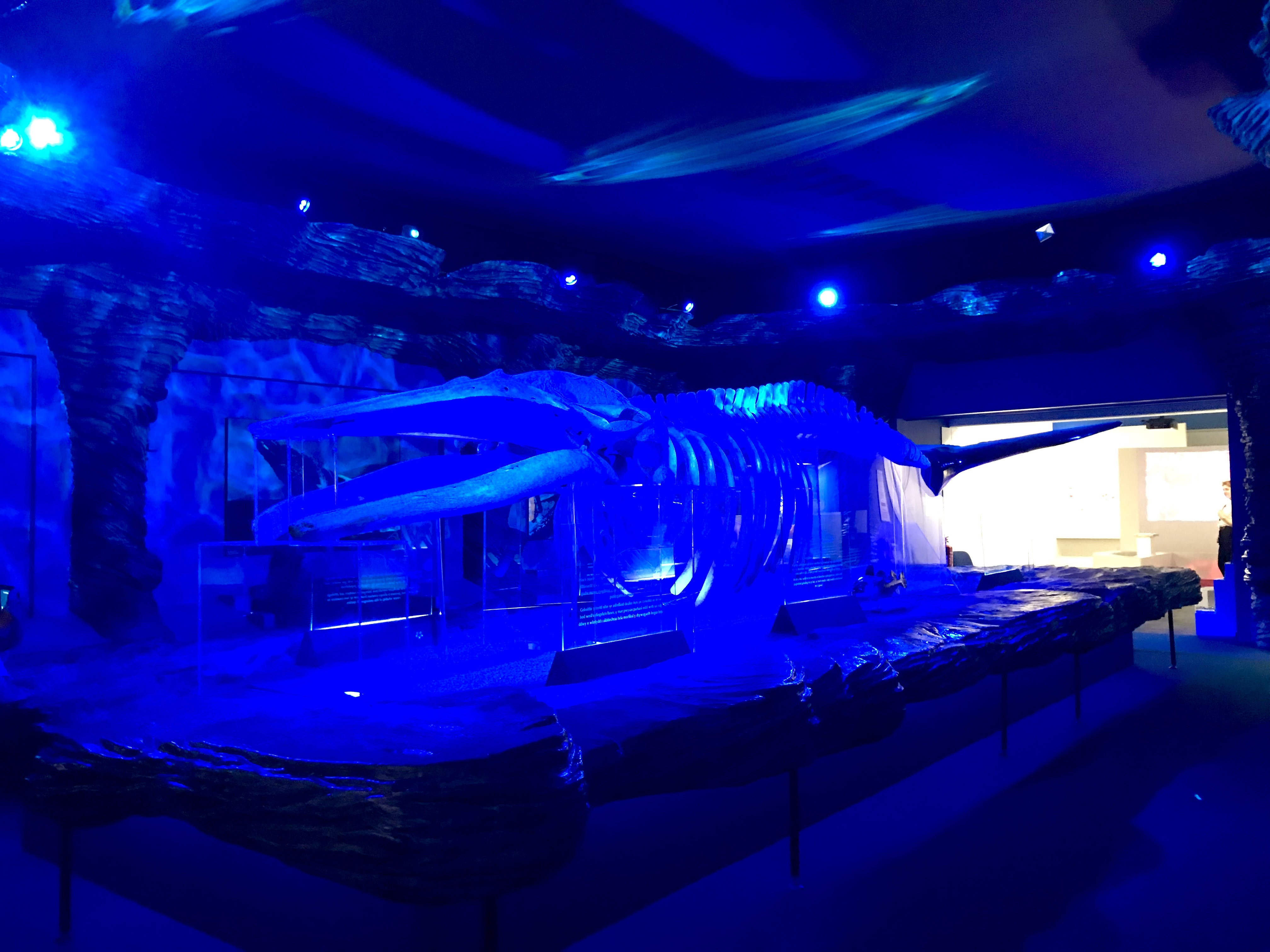 The whale skeleton came to the museum after the poor creature died and was washed up on the shore at Aberthaw in 1982. The AR screen brings him to life showing you how he and his tail would have moved.

The dinosaurs in the Evolution of Wales gallery are some of the museum’s most popular exhibits. My children love the replicas and skeletons. Many of them were found locally and it’s a surreal thought thinking these creatures once lived right here in South Wales.

The AR handset brings to life the small dinosaurs who stand on the arid plains area depicting South Wales 220 million years ago. South Wales was an arid desert landscape close to the equator. Intense storms led to flash flooding creating mud in which dinosaurs left footprints. The footprints that can be seen on the floor here are actual dinosaur footprints preserved from the South Wales coast with several types of footprints visible.

Some of the dinosaurs come to life while further on in the gallery prehistoric sea creatures swim above us.

My children thought it was all amazing – although it would be great to see the technology expand to include more of the dinosaurs.

Monet’s waterlily garden AR experienceAlthough I often take my children into the art galleries they are usually really quiet places and I worry about disturbing the serious art appreciators. However having the Monet waterlily scene made me feel more confident about being in there; like the museum were actively encouraging families to visit.

Two of Monet’s famous waterlily paintings sit in the Impressionists gallery – and with the AR handset the entire floor around them turns into a visualisation of the gardens that inspired the late 19th and early 20th century artist.

My children thought it was great fun to bob up and down under the water and to try to sit in the (virtual) brown wooden rowing boat in the middle of the gallery and to.

As they explored the gallery very soon they were introduced to the Davies sisters – Gwendoline and Margaret – both influential collectors of art who bequeathed 260 works to the museum and its galleries. Monet himself also stands on the bridge talking to visitors about his gardens.

Captions about the works pop on screen giving visitors more information. My four year old was less bothered about these but it prompted lots of discussion from my older two children.

Museum ExplorAR is a really fun way of bringing to life some of the museum’s most popular exhibitions. I had worried the experience would detract from the exhibits as children become distracted by the technology. But actually having historical characters such as the Davies sisters and Monet speaking to us and having information popping up on the screen was really informative.

If you don’t know the floorplan of the museum very well it might be a bit of a rush to do it all in an hour – especially if you want to spend time taking in the rest of the exhibits in the galleries where the technology works. It might be better to spend time exploring the museum first and then coming back to use the technology. On especially busy days other people may get in the way of the screens. But overall we loved using the AR handsets and all of us learned something from them as well as having fun.

The Museum ExplorAR is still being developed by the museum and depending on its success may be expanded to include other exhibits. It would be great to see this evolve as museums use modern technology to enhance our understanding of the past.

Museum ExplorAR sets are available to hire from the museum shop on the ground floor. There is no need to book although please bear in mind that at busy times the equipment may not be immediately available. Handsets cost £10 to hire for one hour. See the museum’s website for more information.

The museum is not open on Mondays, although is usually open on Bank Holiday Mondays. 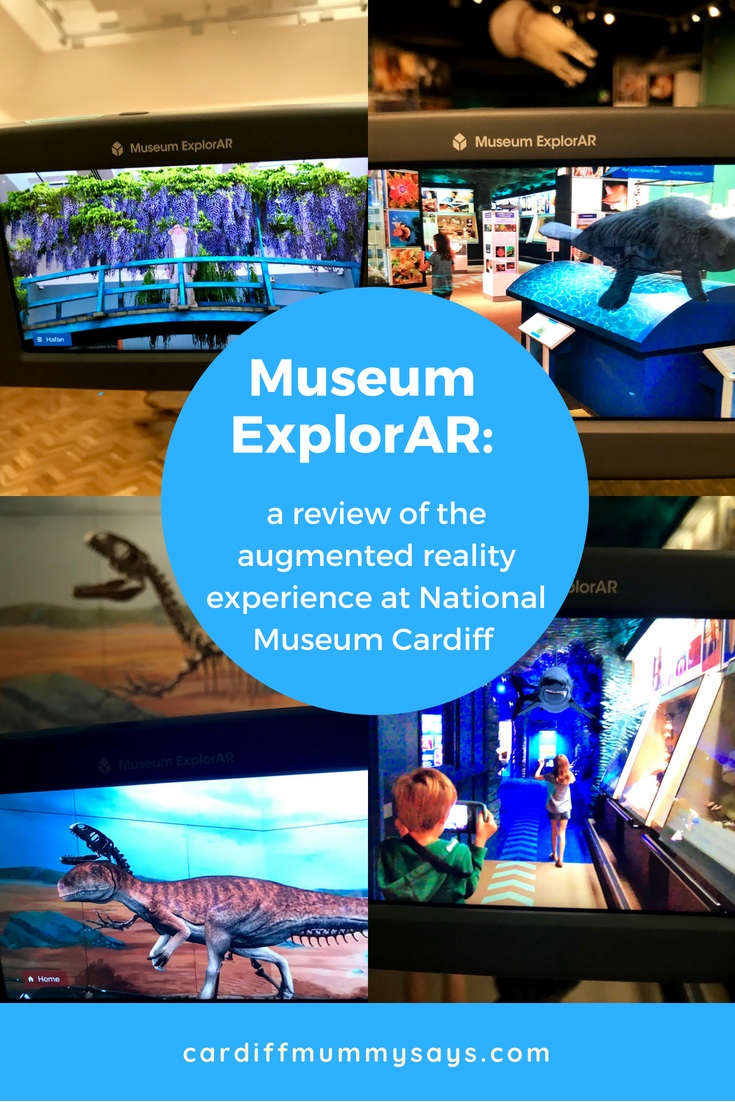 For more of what to expect at National Museum Cardiff read our review here.

The museum also run a weekly pre-school session every Friday 11am-4pm during term time – read our review of Toddler Time here. Plus there are weekend family Clore Explorer sessions in the Clore Discovery session.