As one of the most imaginative children’s authors ever to have existed, it’s quite fitting that Wales Millennium Centre’s tribute to Roald Dahl in the centenary year of his birth is as creative and vibrant as the man himself was.

In its essence, The Wondercrump World of Roald Dahl – created in association with London’s Southbank Centre, where it has been for the last five months – is an exhibition about Dahl’s life and how his experiences influenced his children’s stories.

But rather than simply walking around a museum gallery, looking at decaying objects in glass cases, visitors are taken on an interactive tour through a series of eight rooms which are as delightfully creative as they are informative. 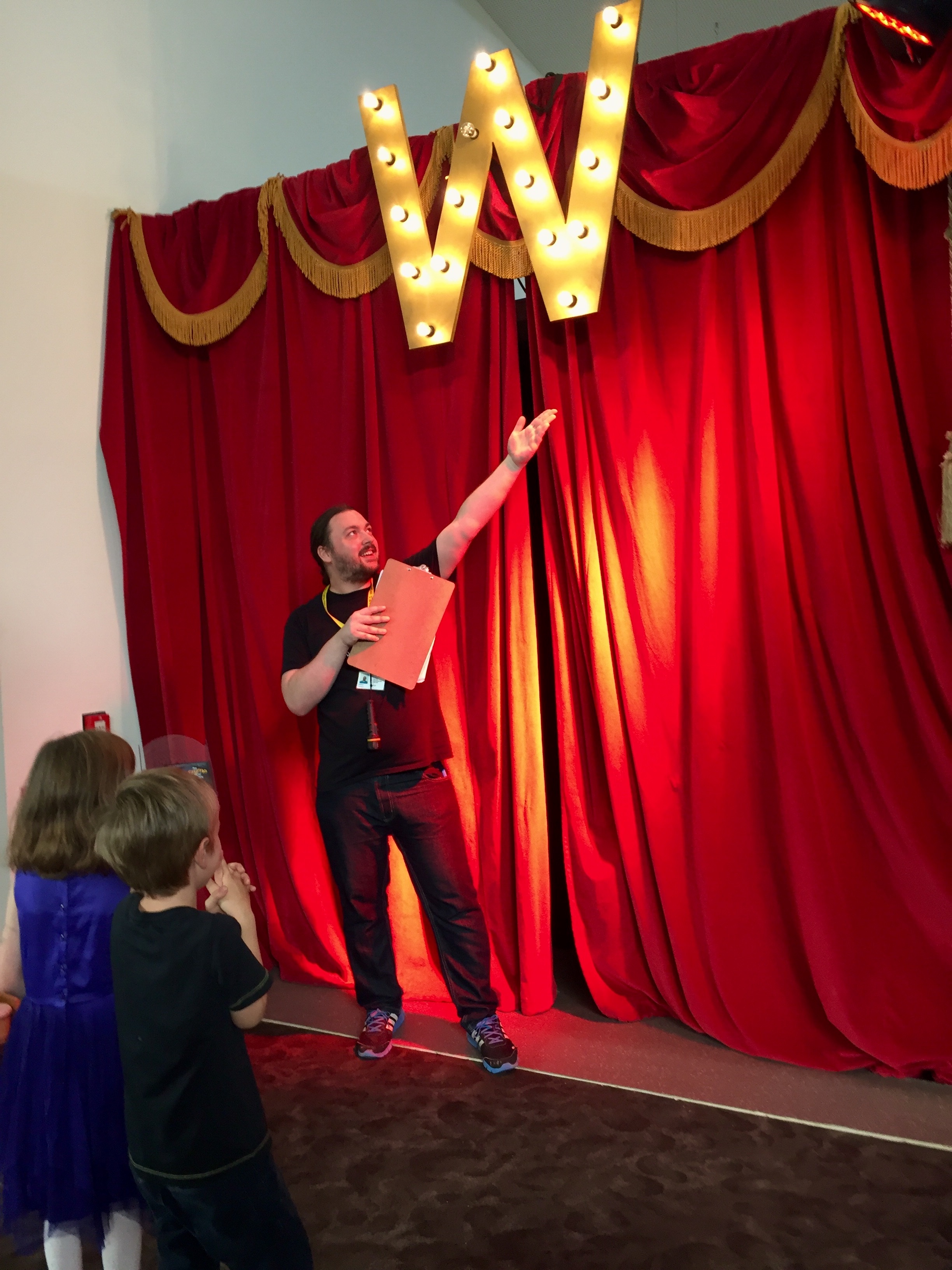 The tour begins with our guide, the brilliantly charismatic and enthusiastic Ed, collecting us from Wales Millennium Centre’s foyer – where incidentally we’d just been making Dream Jars to be used in City of the Unexpected, a free Cardiff-wide weekend of Dahl celebrations on Saturday 17th and Sunday 18th September – and leading us up the stairs to two big red velvet curtains.

I had absolutely no idea what to expect at this point, and I think my children were a little apprehensive, but when Ed introduced us to Nathan the Narrator, an audio guide who helped us on our journey, all manner of silliness started occurring, which put them at ease.

We headed through the curtains and on to the other side, where a cardboard city depicts Great Missenden, the Buckinghamshire village where Dahl (who was born in Cardiff and spent his early years here) wrote his stories. Compared to the rest of the journey, this room is a little underwhelming, although I found the artefacts from his life fascinating and would probably have spent a little longer exploring them all had I been travelling at my own pace. 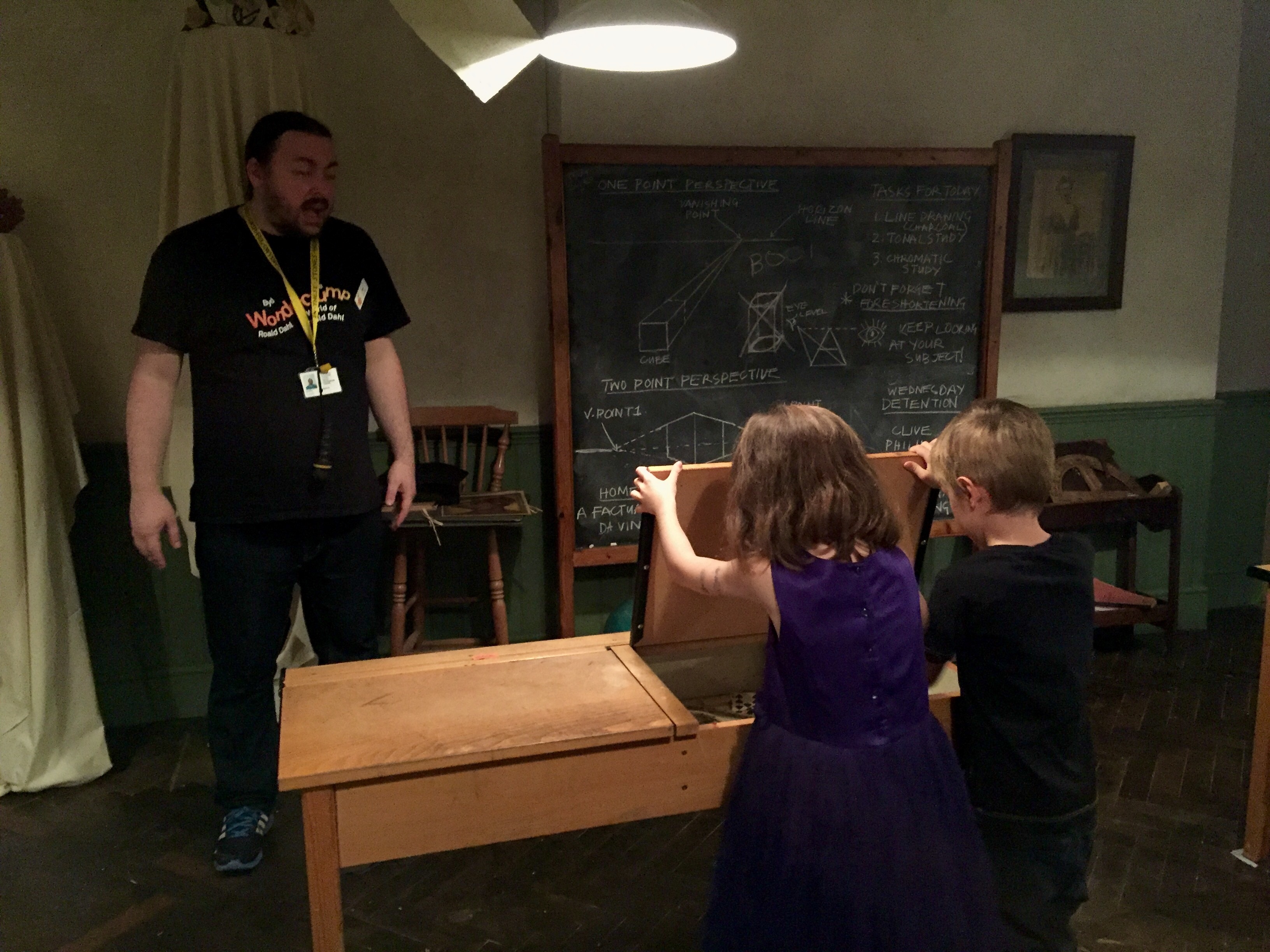 The next stop is a 1930s school room, where my children loved opening and closing the traditional wooden desks and discovering such treasures as an old school report of Dahl’s, his collection of stamps, and letters he’d written to his mother from his boarding school days. The letters are all signed Boy, which explains the name of his childhood memoir.

It’s then on to the desserts of Libya, where aeroplane parts strewn across the floor are our guide’s cue to tell us all about how Dahl crashed a plane in the second world war – and discovered he had the kind of vivid imagination which would be better suited telling stories than flying planes. 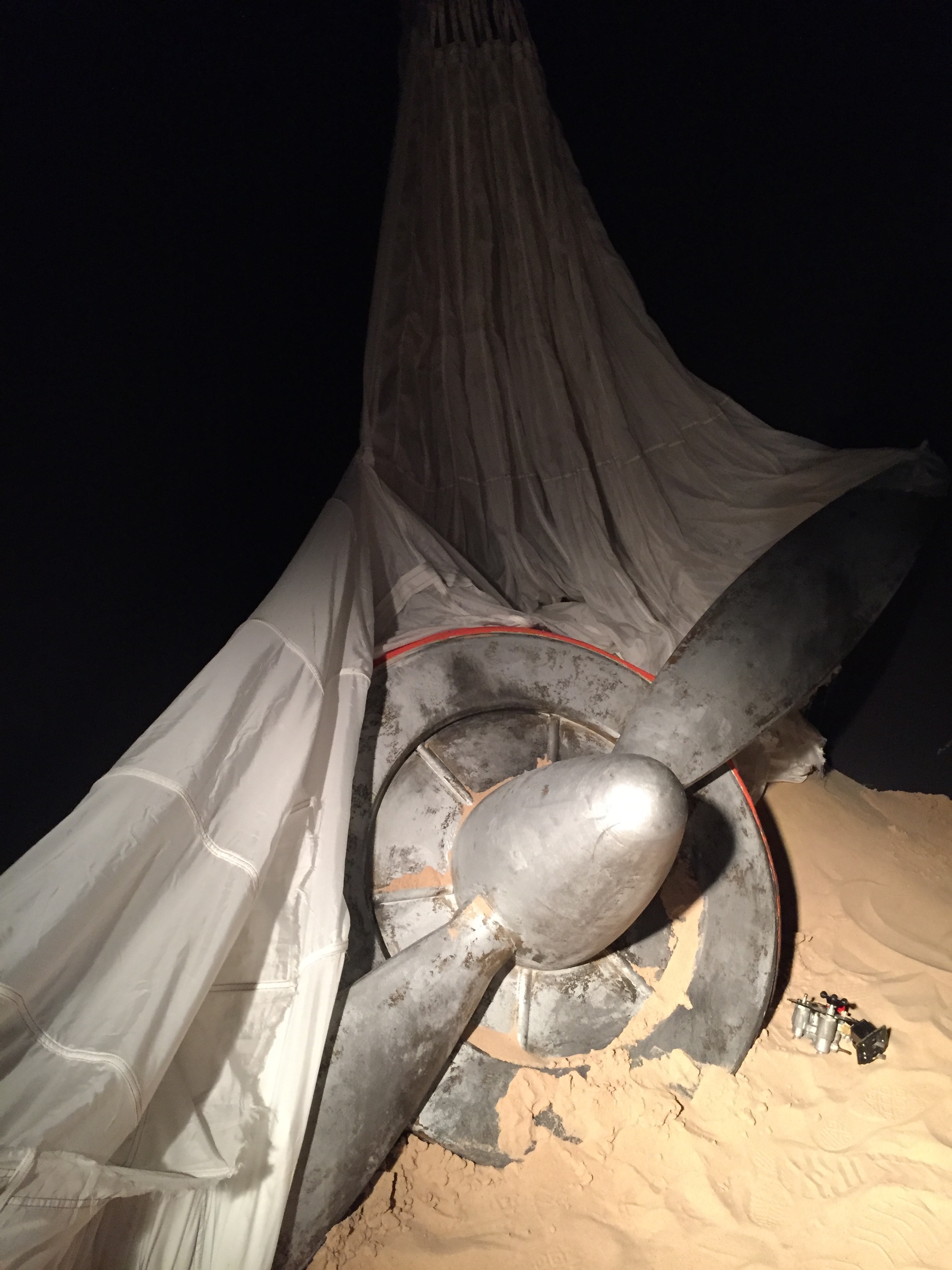 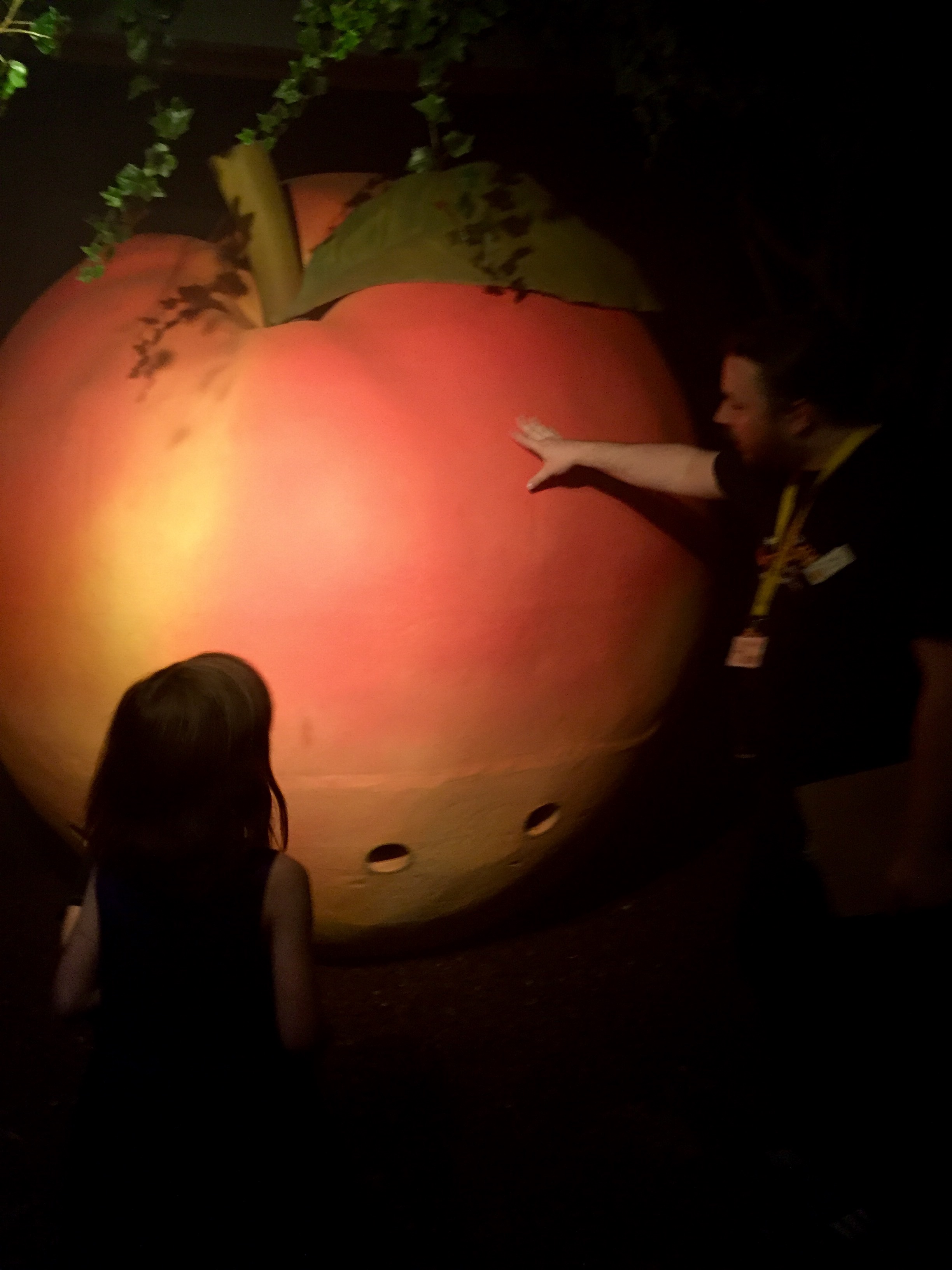 We journey through a darkened forest, complete with giant peach (of James and the Giant Peach fame, naturally); an upside down kitchen scene from The Twits where furniture hangs from the ceiling and frames on the wall feature Dahl’s handwritten notes on the kinds of wicked tricks Mr and Mrs Twit should play on each other; an attic scene where we learn about Dahl’s inspiration for the BFG and see a pair of Dahl’s own sandals, on which his giant’s footwear was inspired; and a Matilda-inspired library, where we moved books with the power of our minds.

The final room of the tour was my children’s favourite – a colourful story lab, where we dressed up in costumes inspired by the books; squeezed a wall of whoopee cushions to make our own whizzpopping sounds (as the BFG would call such noises!), created our own stories by mixing and matching random magnetic sentences, and watched as our guide used a crumpled piece of paper entrusted to my children earlier on in the tour to create a magical surprise. 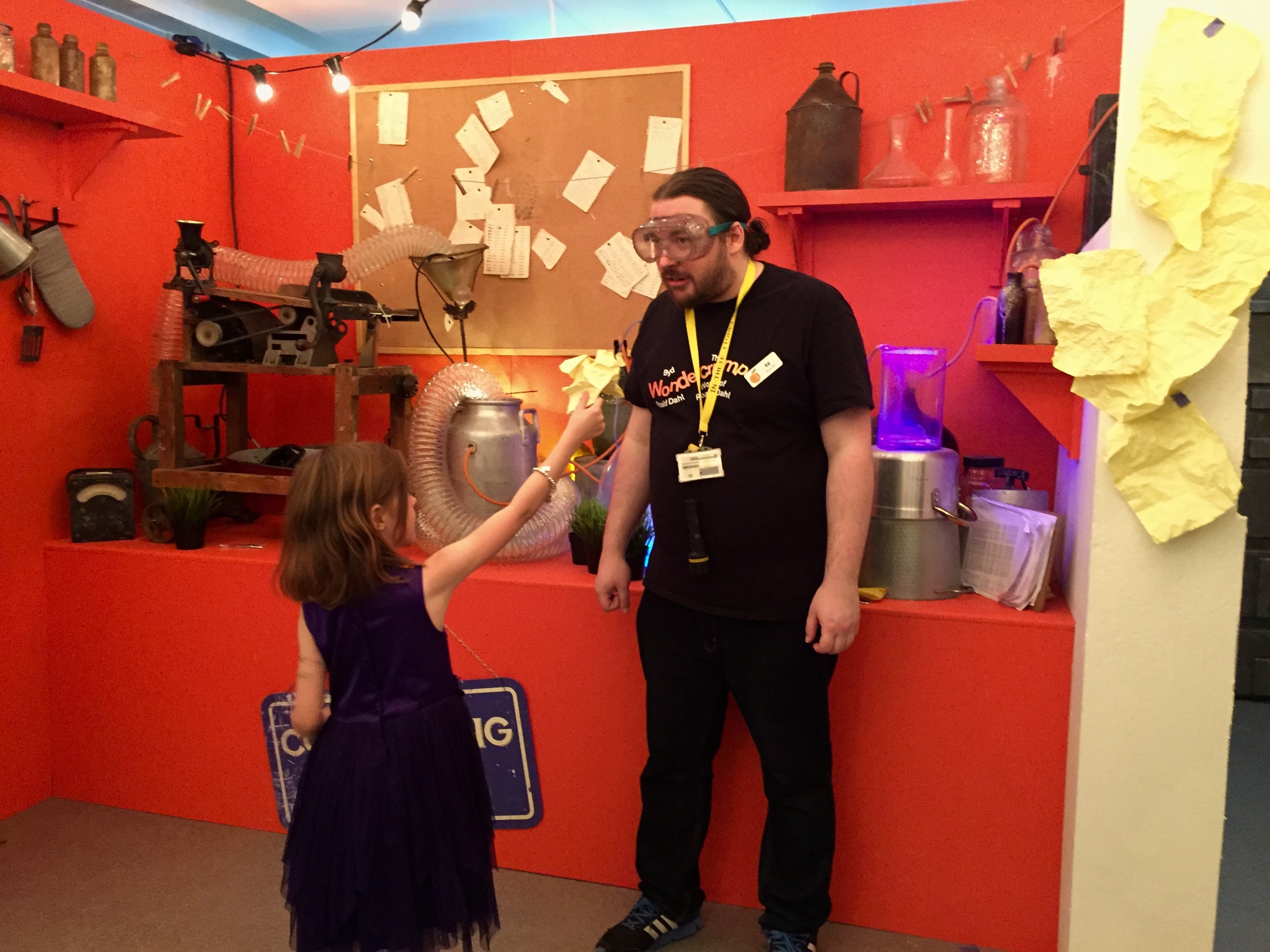 The tour was an hour – and it absolutely flew by. I don’t think any of us were ready for it to end and leave this magical world.

It’s aimed primarily at key stage two children, so those aged 7-11. My three are 6.5, almost 5 and 2¼ and although they’re all younger than the age guide, they have loved all the Dahl books we’ve read so far, and really enjoyed the experience. I would say it depends on the individual child though, as there is a lot to concentrate on while going around, especially if they are not familiar with Roald Dahl’s books or the films. Toddler got a bit scared during some of the darker rooms, and although I wouldn’t have taken him if it hadn’t been for my older children, he was really engaged in his own little way and did so well at listening to the guide.

I had worried whether he’d be okay walking all the way around as you’re not allowed to bring buggies into the exhibition (you can leave them at the ticket desk). But there was so much going on, he was fine. It’s also worth noting that once the tour begins, it would be difficult to pop out to use the toilet, so make sure your children go beforehand. Photography is also not allowed during the exhibition – we were given permission for the purpose of this review.

If you’re visiting during the school summer holidays, you can create a dream jar in the foyer as we did (for free), fish for tortoises inspired by Esio Trot (£3 for five minutes of fishing), visit the Roald Dahl-themed gift shop, and explore the tunnel which has a few surprises behind it.

The Wondercrump World of Roald Dahl is a fascinating and imaginative tribute to Roald Dahl in the centenary year of his birth. My children left wanting to read more of his stories, while I’ve promised to finally get around to reading his biographies. A fun and inspiring hour learning more about one of our nation’s favourite children’s authors. Highly recommended.

The Wondercrump World of Roald Dahl is at Wales Millennium Centre until Saturday 14th January 2017, with tours taking place between 9.45am-6pm. Tours are available in Welsh and English. Maximum of 15 people per tour. There must be a minimum of one adult for every three children. Tickets cost £8-£9.

Have you been to The Wondercrump World of Roald Dahl? I’d love to know what you thought of it, either in the comments section below, on the Cardiff Mummy Says Facebook page or on Twitter.

Thanks to Wales Millennium Centre for providing us with tickets for the purpose of this review. First photo at the top of page by Christopher Davies. All other photos mine.

For more ideas of family-friendly days out in South Wales, see the Cardiff section of Cardiff Mummy Says. 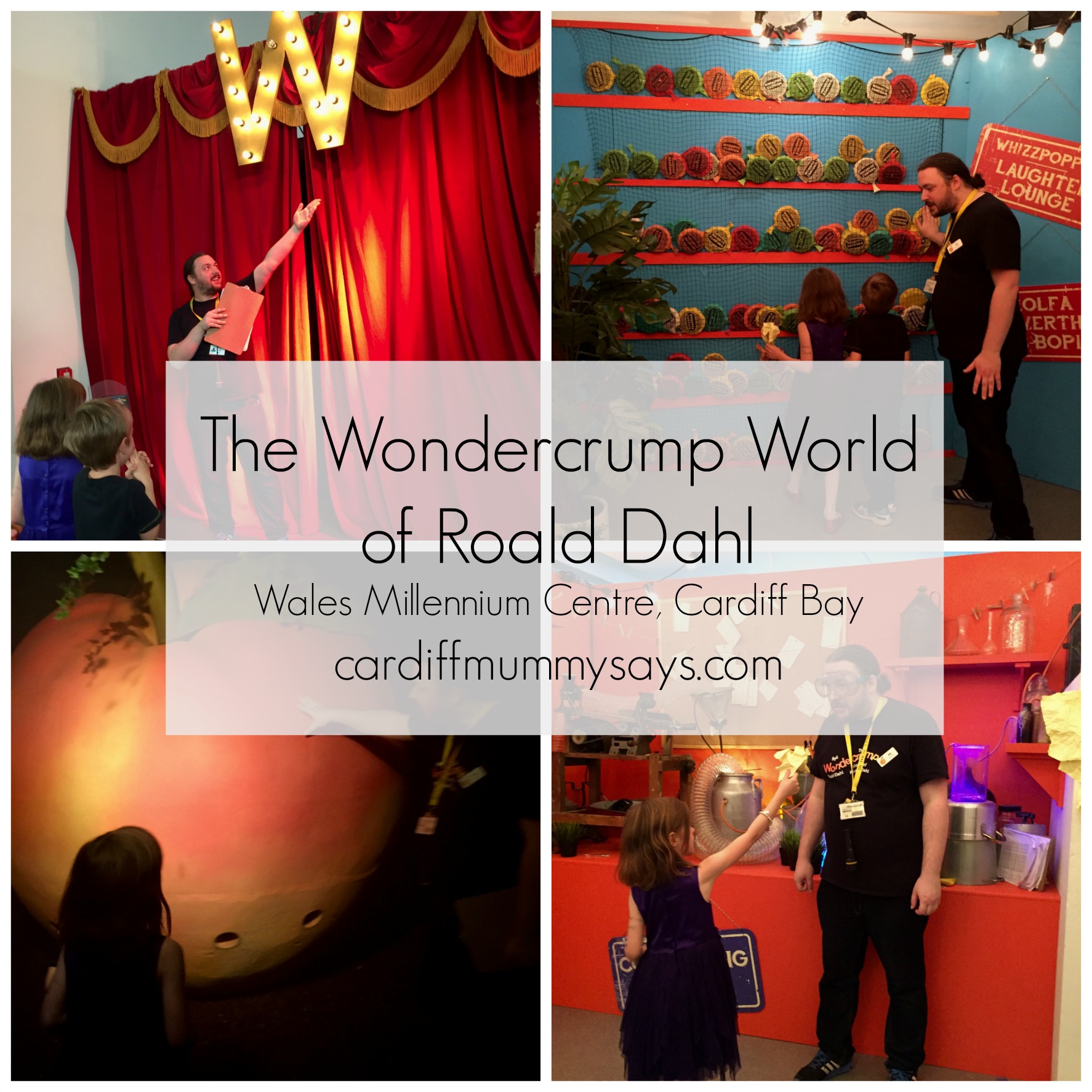