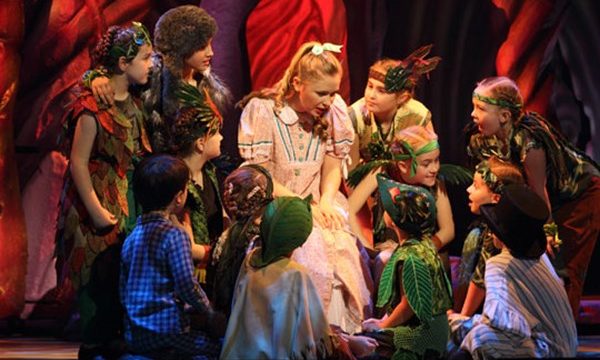 Let’s just cut to the chase. The one and only David Hasselhoff is in Cardiff right now, starring as Captain Hook in Peter Pan, this year’s pantomime from the New Theatre Cardiff.

Yes, the show features several references to Knight Rider and Baywatch, the two programmes the Hoff, as he is affectionately known, is most famous for starring in.

Yes, there are loads of Hoff-related jokes – the “don’t Hassle the Hoff” mantra from the pirates being one that particularly made me laugh, as well as the reminder to switch our phones “hoff” before the show starts.

And yes, the Hoff puts on a good performance – and can actually sing.

Despite the fact he’s had a pop career, I genuinely wasn’t expecting his voice to be so good (so sorry I doubted you, Mr Hoff!). He belted out his rendition of Frank Sinatra’s My Way with such power and depth in his voice, it was quite brilliant. He also did a great duet with Mimi the mermaid, played by Ebbw Vale girl Stephanie Webber from BBC1’s The Voice. The two of them sang a humorous fish-pun-filled take on Andy Williams’ Can’t Take My Eyes Off You, where Captain Hook wants to eat the mermaid, with lines such as “I want to get my Hook into you”. The pair had a great rapport together, having starred together previously in the touring theatre production of Last Night A DJ Saved My Life. In fact, it was the Hoff who recommended Stephanie to star in the panto with him this Christmas. 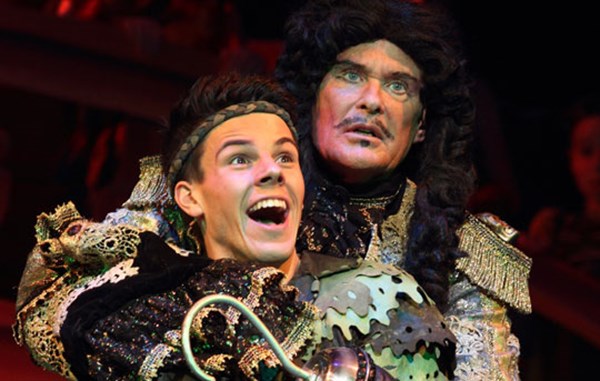 The Hoff’s popularity means he doesn’t quite have the usual sway of a panto baddie – there are a lot less boos and hisses than you’d usually find in a panto. But he has a great stage presence and is undoubtedly one of the main draws of the show – the cheers he gets when he first steps on stage are testament to that.

However, this is definitely a real ensemble performance, from the principal actors to the local children from The Lorri Guppy School of Dance, who star as the Lost Boys and John and Michael Darling.

Matthew Chase is a charismatic and very likeable Peter Pan, while Natalie Winsor, Julie Cullen and Emma Prosser all give strong performances as Tiger Lily, Wendy Darling and a roller-skating Tinker Bell respectively. There are some great chorus dance sequences and brilliant special effects, including Peter Pan flying on and off the stage, and a menacing giant crocodile. 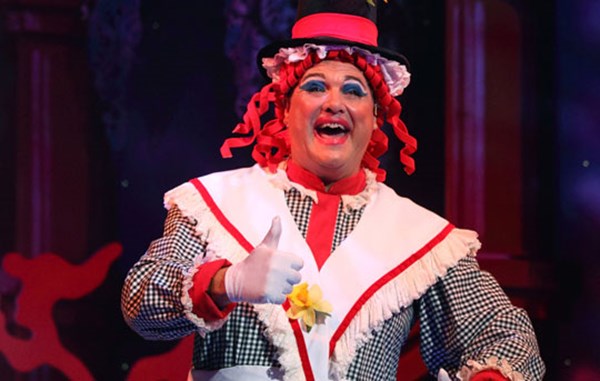 For me, however, it is Mike Doyle as panto dame Mrs Smee who really drives the show. With 26 years of panto experience, and this being his fourth consecutive year at the New Theatre, he knows exactly how to entertain the audience. The Carmarthen-born, Bridgend-based entertainer delivers his jokes and one-liners with great comedy timing – all while wearing the most fantastically flamboyant costumes. With an exaggerated Welsh accent and lots of local references, he encourages plenty of audience interaction, including a greeting based on X Factor’s Honey G –“When I say Mrs, you say Smee” which the audience loved.

As you would expect with panto, there is plenty of risqué humour aimed at the adults and designed to go completely over the heads of the children. The women in the row behind me were genuinely crying with laughter at a tongue-twister scene between Hoff and one of his pirate crew. It was delivered word perfectly and with such care and grace, but we were all on the edge of our seats keeping our fingers crossed for the sake of our youngsters that they didn’t slip up.

I did feel a bit uncomfortable with the Hoff’s references to missing the boobies from Baywatch, and Tinkerbell was also dressed way sexier than the Disney character my children are familiar with. If my kids – just turned seven-year-old Little Miss E and five-year-old Little Man O – hadn’t been there, none of this would have bothered me, so perhaps I’m being overly-sensitive on their behalf at the realisation that they are coming face-to-face with this kind of sexualisation, even if they didn’t understand a lot of it.

Overall though, Peter Pan is a great family panto production. For two and a quarter hours, we sang, we cheered, we laughed – and my kids spent the journey home asking if we could come and see it again. A definite success!

Thanks to the New Theatre Cardiff for inviting us along to review the show.

Have you seen Peter Pan at the New Theatre, or are you planning on watching it? Do let me know in the comments section below, on the Cardiff Mummy Says Facebook page, by tweeting me on @cardiffmummy

1 Comment to Peter Pan at the New Theatre Cardiff – review