You can read the statistics all you like, but nothing prepares you for seeing Monster Jam in action.

Only when you’re stood right next to these machines, and when you witness them jumping into the air, do you appreciate what that really means though.

The wheels alone are bigger than my children. We can’t even reach the tops of the trucks. But yet they accelerate up ramps and leap into the air; they balance on just two wheels (front, back or one-sided), they frequently topple upside down, and the driver walks away unscathed. Not to mention the insane amount of noise they make, even when you’re wearing ear defenders.

Seeing Monster Jam live is an experience like no other. I never thought I’d be the kind of person to be genuinely excited by an event involving cars. In fact, I went along to review our first Monster Jam at the Principality Stadium two years ago feeling a bit blasé about the whole thing. Oh my, were my eyes opened to this exhilarating, energising world of monster truck racing! We were lucky to be invited back last year and again this year… but even if we hadn’t been, I think we would have bought tickets ourselves.

Read on to see what we loved about it so much and to see plenty of photos of those trucks in action.

Each has its own personality – El Toro Loco is a bull who spurts steam from his nose; Zombie has two ghastly arms extending from its front; Megalodon has menacing shark teeth – and each has its own theme song as it enters the stadium. 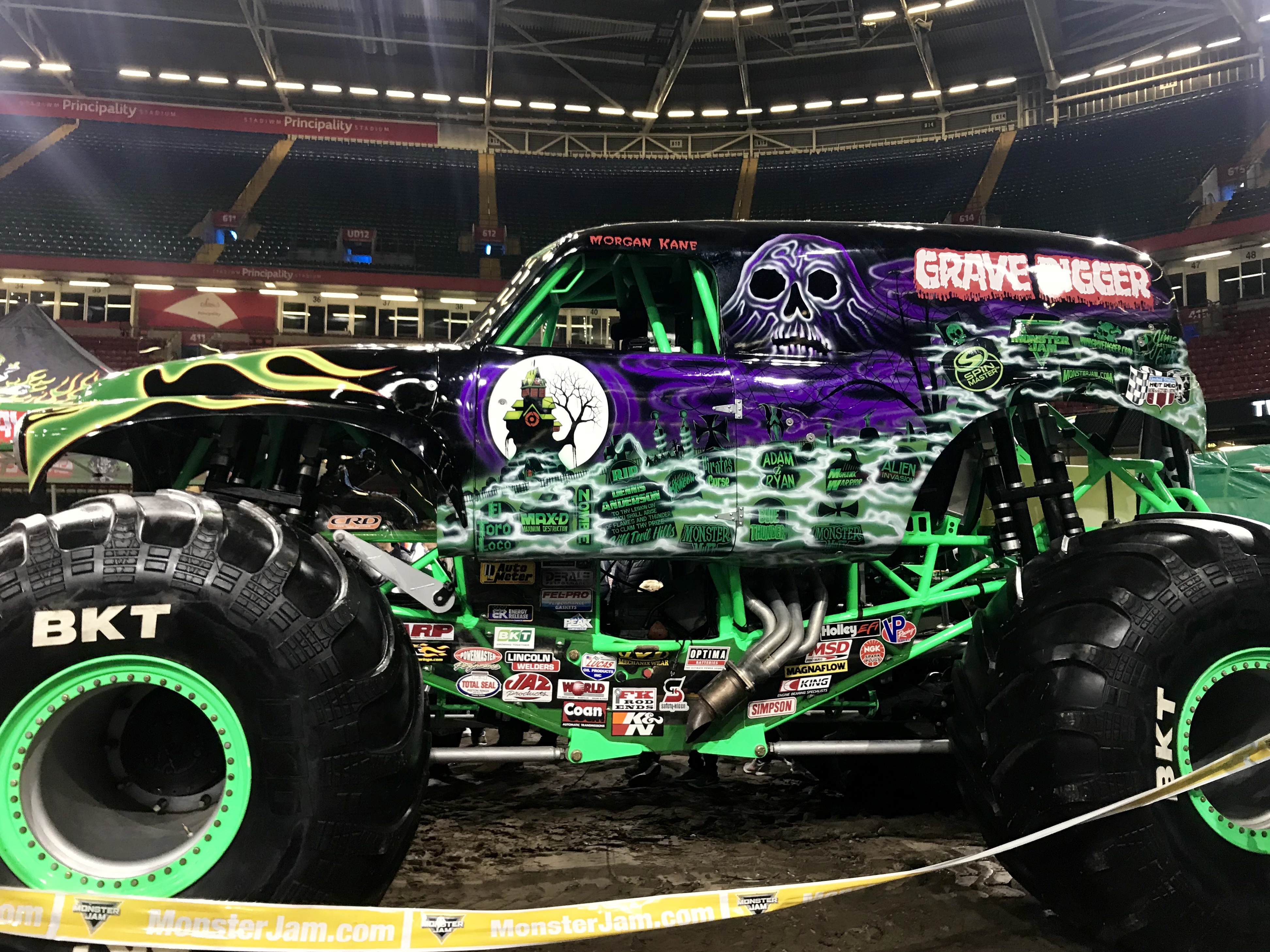 There are dozens of different monster trucks – with 10 making the journey to Cardiff, and the Pit Party is the chance to see the trucks up close and to meet the drivers.

There are some huge fans here, kitted out in all the merchandise and with programmes filled with autographs. The doors opened at 10am with huge queues quickly forming for some of the champion drivers.Some are wearing shirts covered in signatures. One young boy is dressed head to foot in Grave Digger merchandise and clothing, and even has a guitar painted to look like Grave Digger. “I think you must like Grave Digger,” I say to him as we queue to meet another driver. “Just a bit,” he smirks. 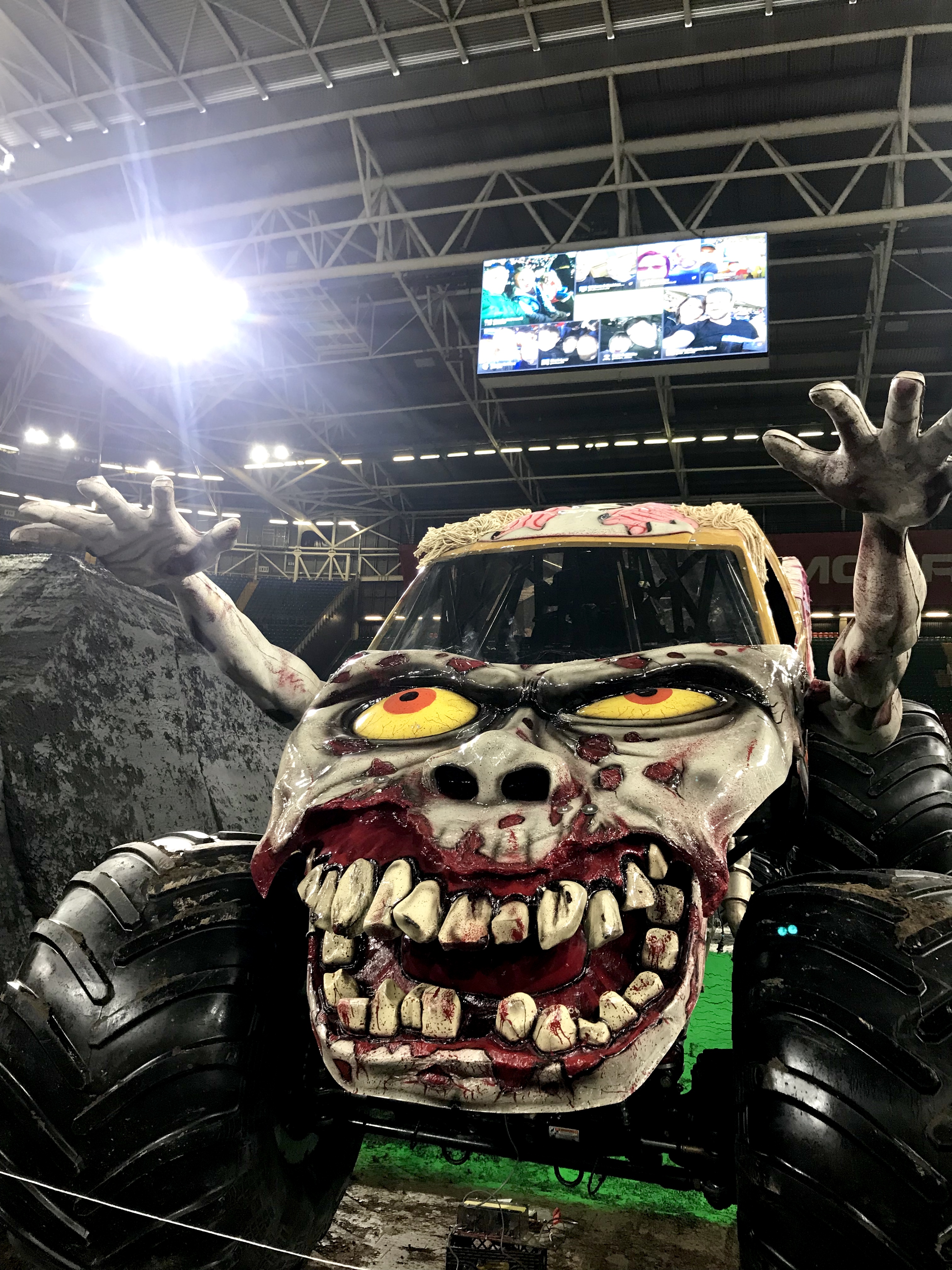 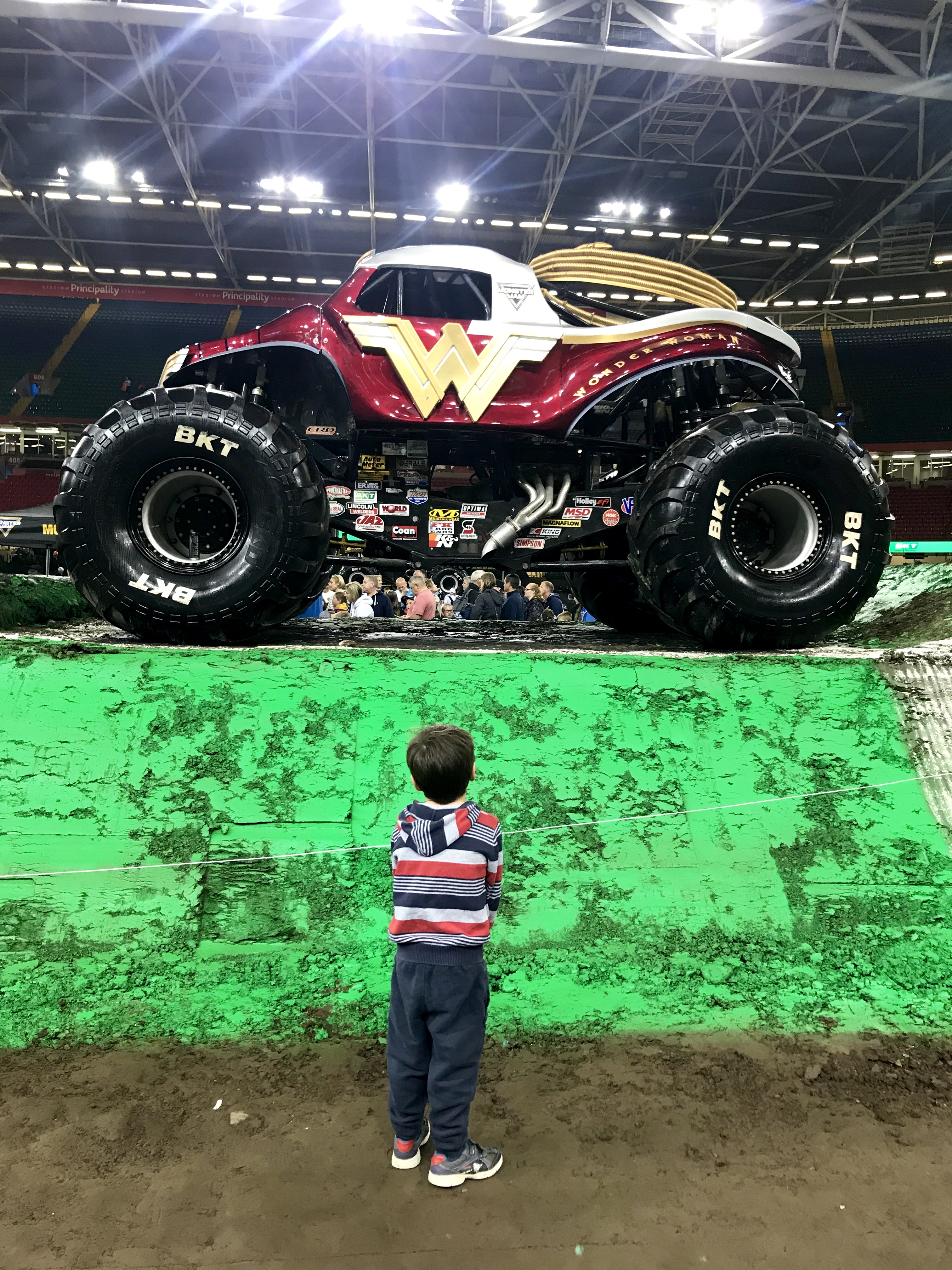 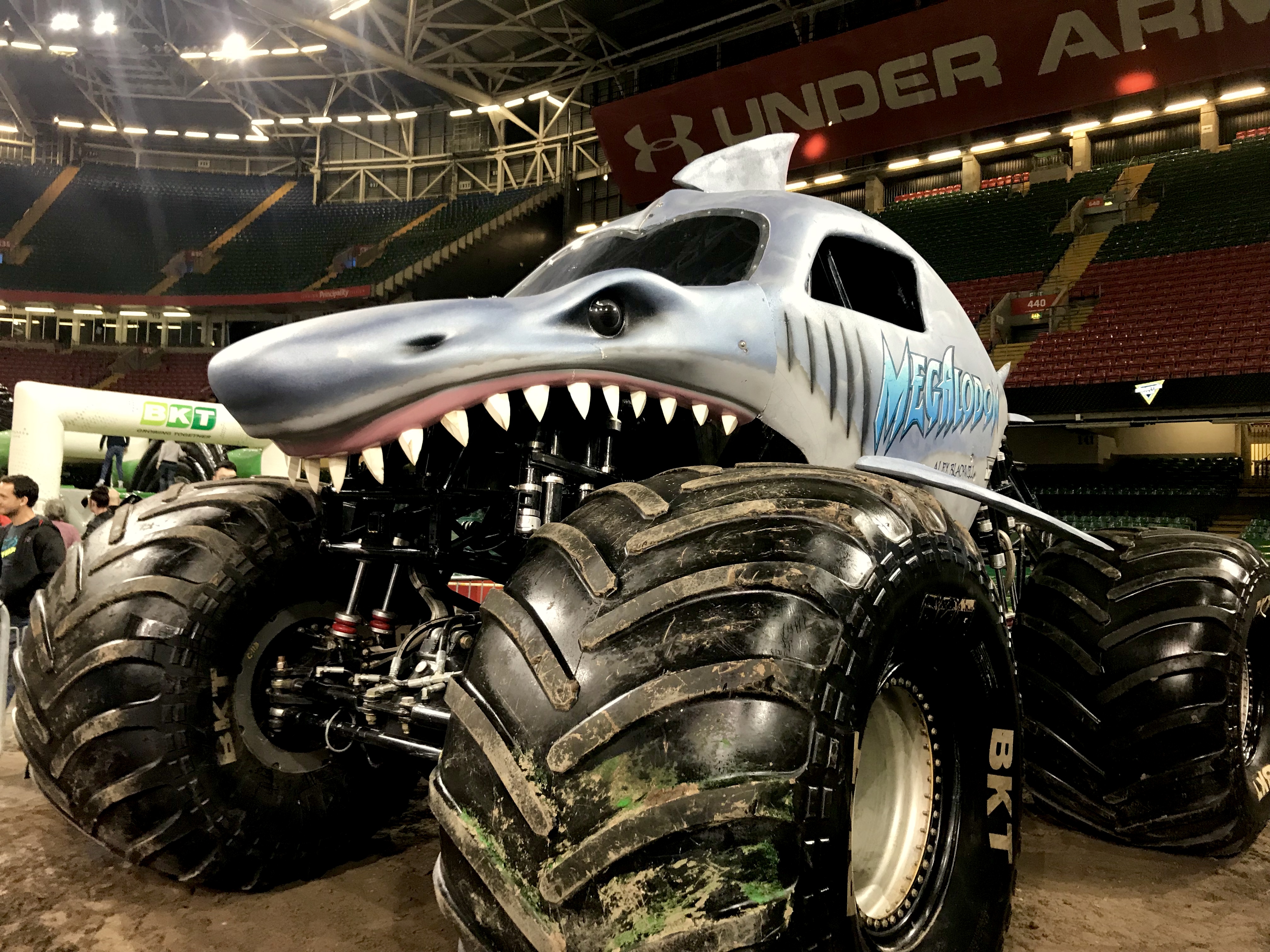 The merchandise stalls are hard to avoid, as are the numerous children playing with their new purchases. Despite pleas from my youngest in particular, we manage the day without buying anything. He seems to have forgotten about all the Monster Jam cars Father Christmas has bought him over the years (and he tells me they were a lot cheaper at Tesco too!). 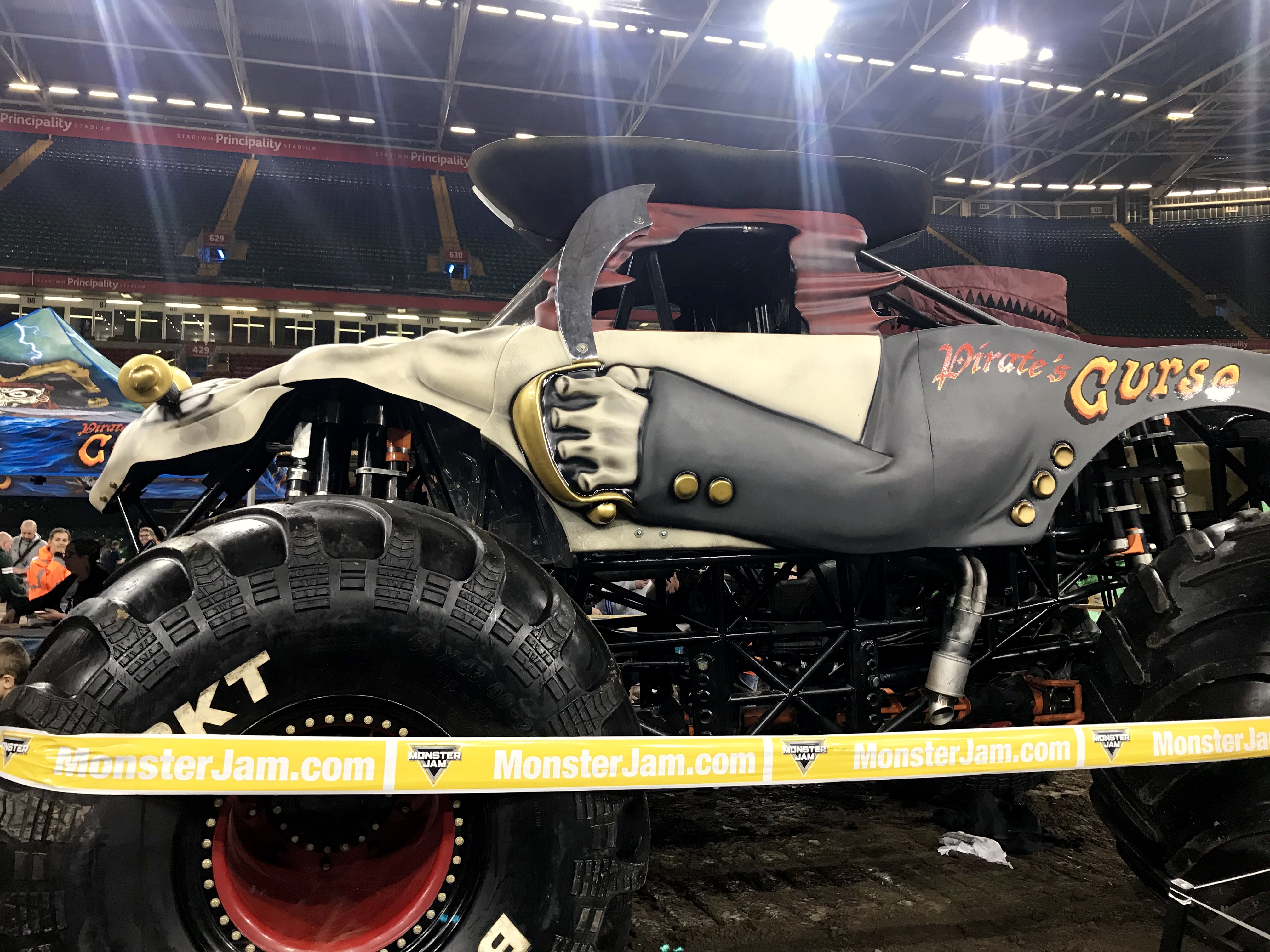 It’s only when you get up close to the trucks that you realise just how huge they are. The wheels are bigger and wider than my children and you have no chance of reaching the top. We spent around two hours here, getting photos with the various trucks and queuing to meet some of the drivers. It’s a great chance for those new to Monster Jam to familiarise themselves with the different vehicles. 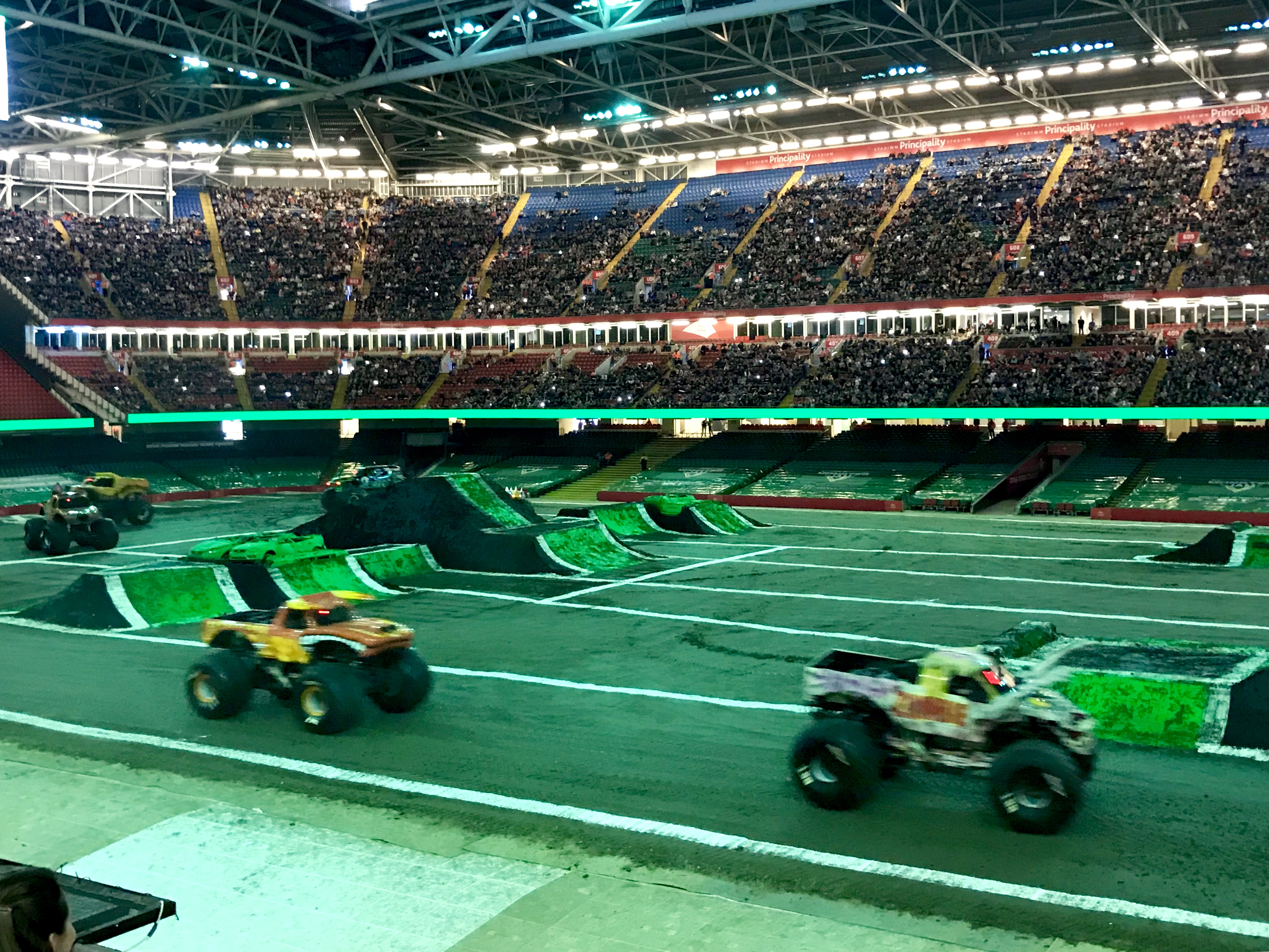 The stadium shuts between the pit party and the main event so we headed into town for some lunch, before arriving back for the main show. Audience members and drivers are being interviewed on the big screens, horns are being blown, flags being waved, and children play with their toy trucks. The atmosphere is brilliant. 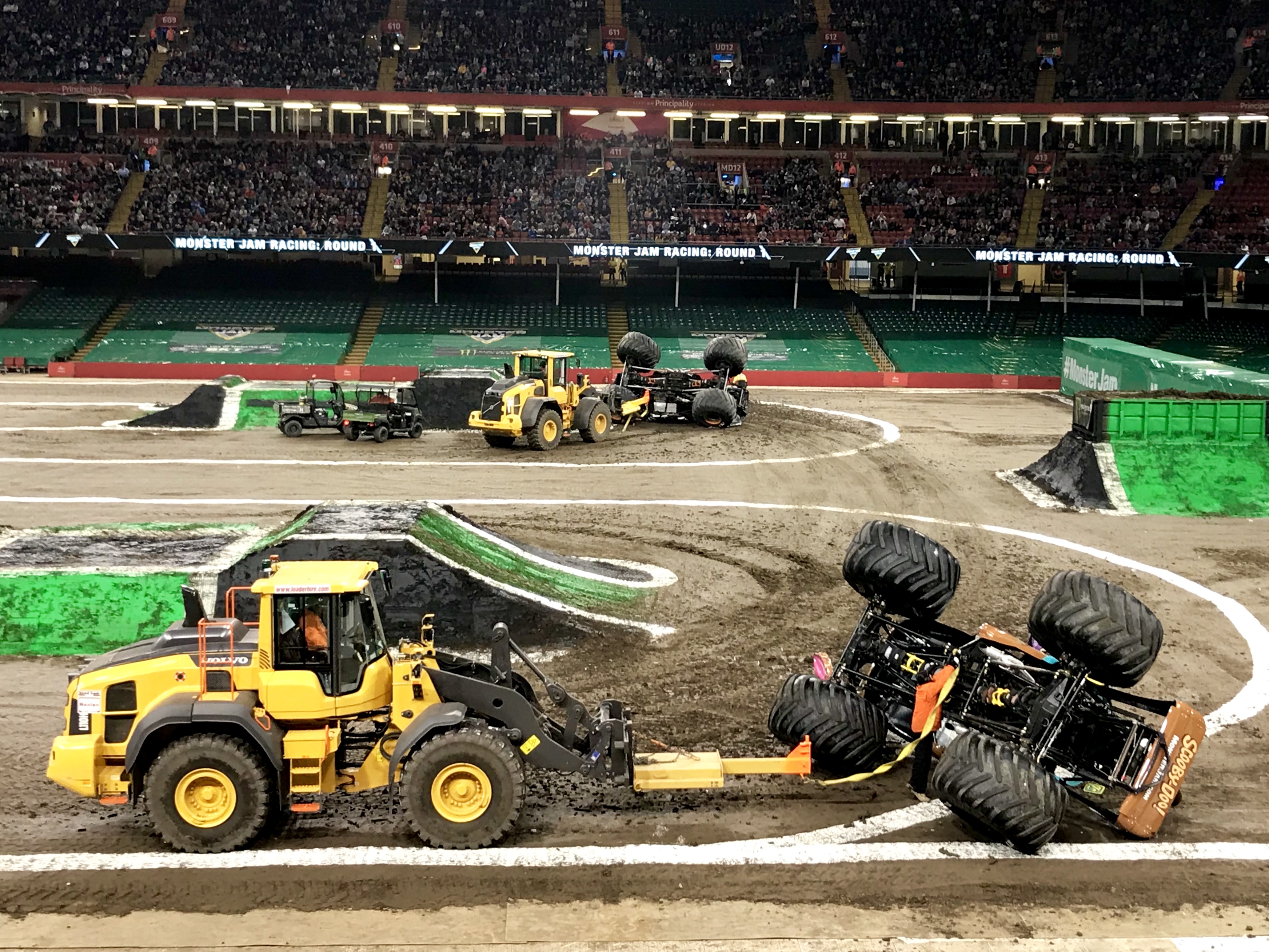 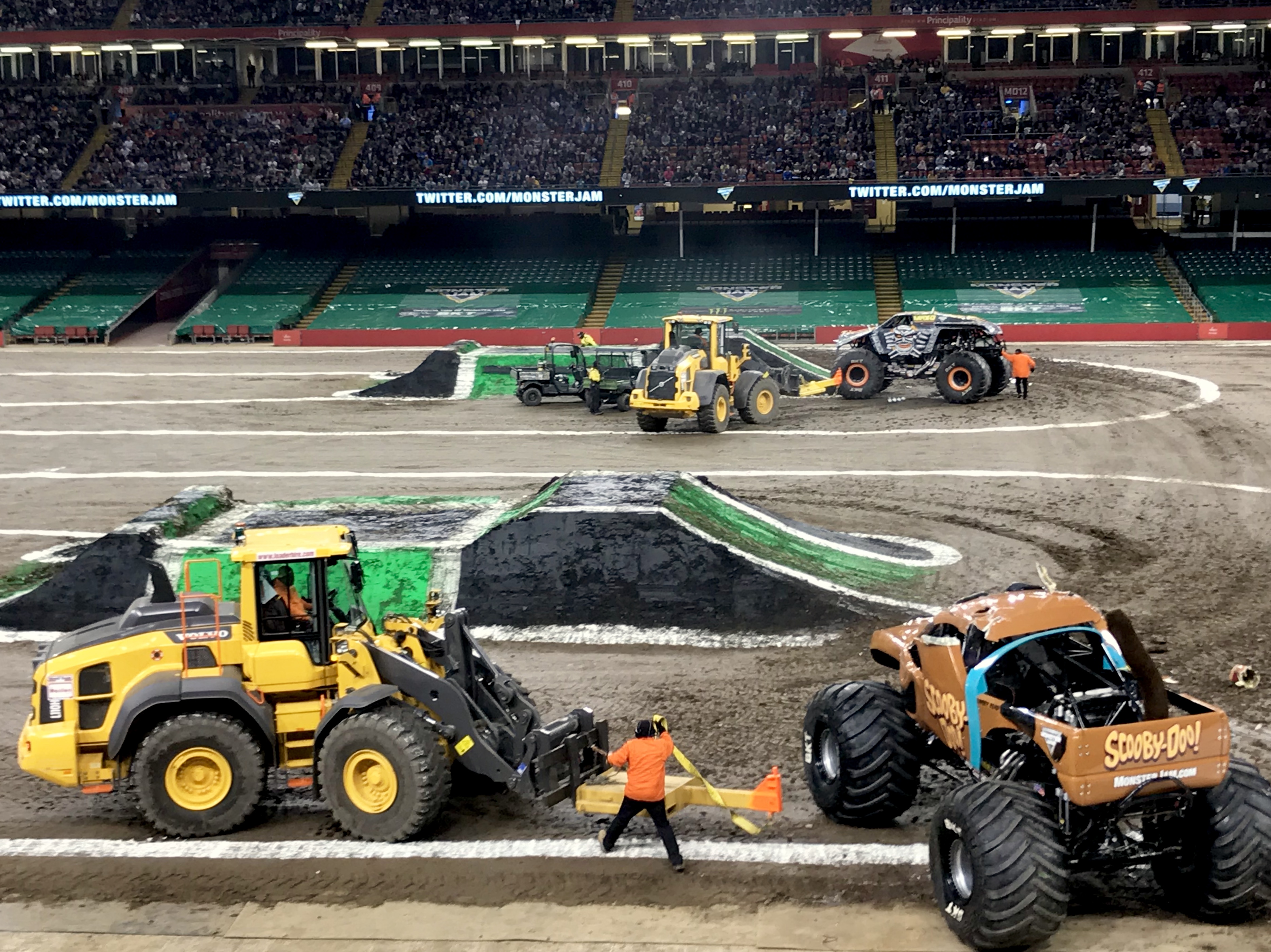 The various cars do a lap of the stadium before parking at one end of the stadium, ready for their turn in the opening event. As in previous years, this is a timed racing round which sees each driver pitted against another, with only the fastest progressing through to the next round. It doesn’t start well with both Scooby Doo and Max D ending up capsised on the floor, pretty much in unison, although the remaining rounds see superfast speeds, and skin-of-your-teeth corner turns as each car battles to complete the circuit in record speed. 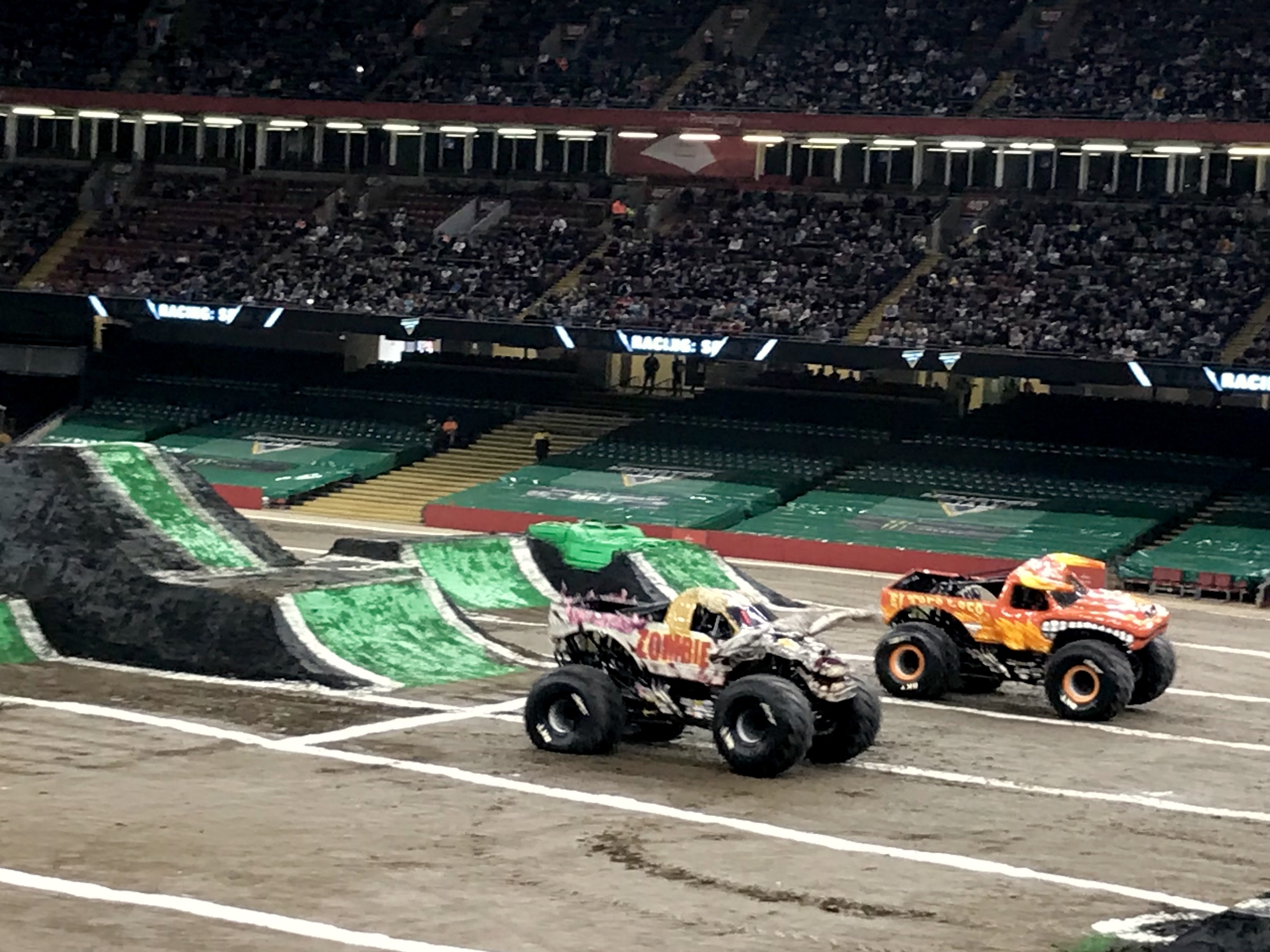 It’s down to the public to decide the winner on this round, via a special judging app. The trucks must impress us with two of their best two-wheeled tricks, from a choice of stoppie; popper, wheelie; sky wheelie, nose wheelie; and bicycle. Highlights for us included Pirate’s Curse and Max D both ‘walking’ on two wheels and Gravedigger’s side wheelie and turn. 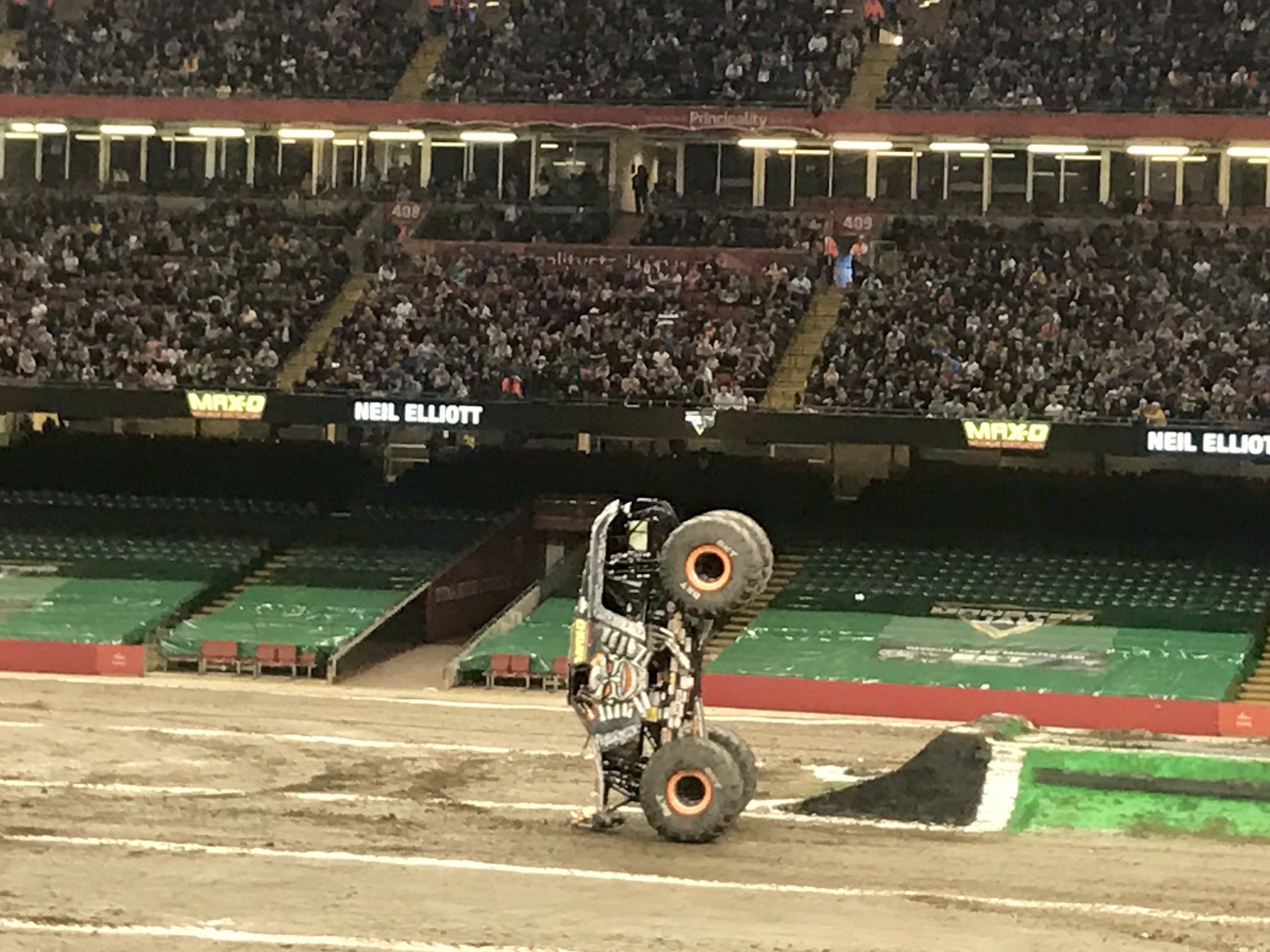 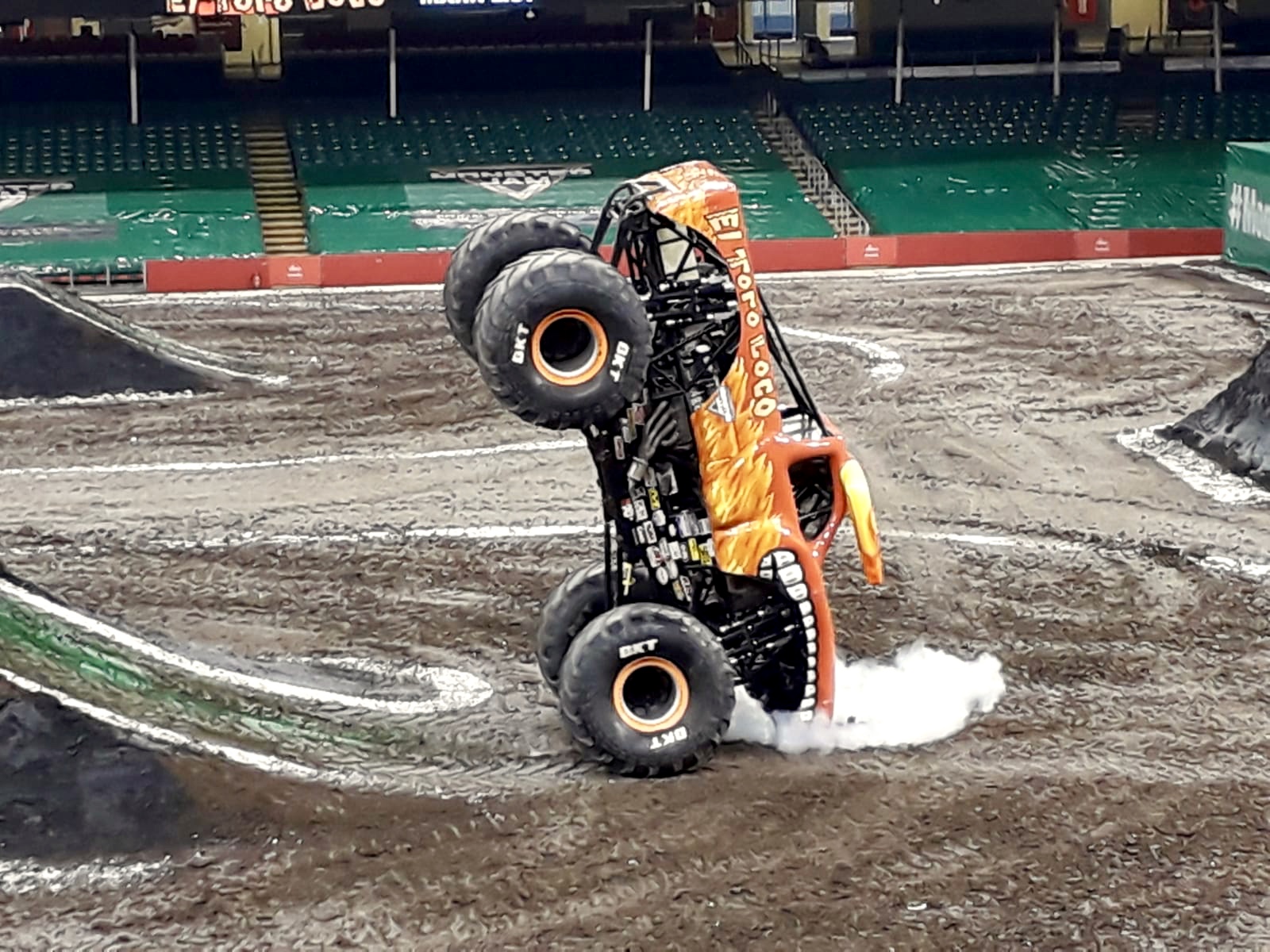 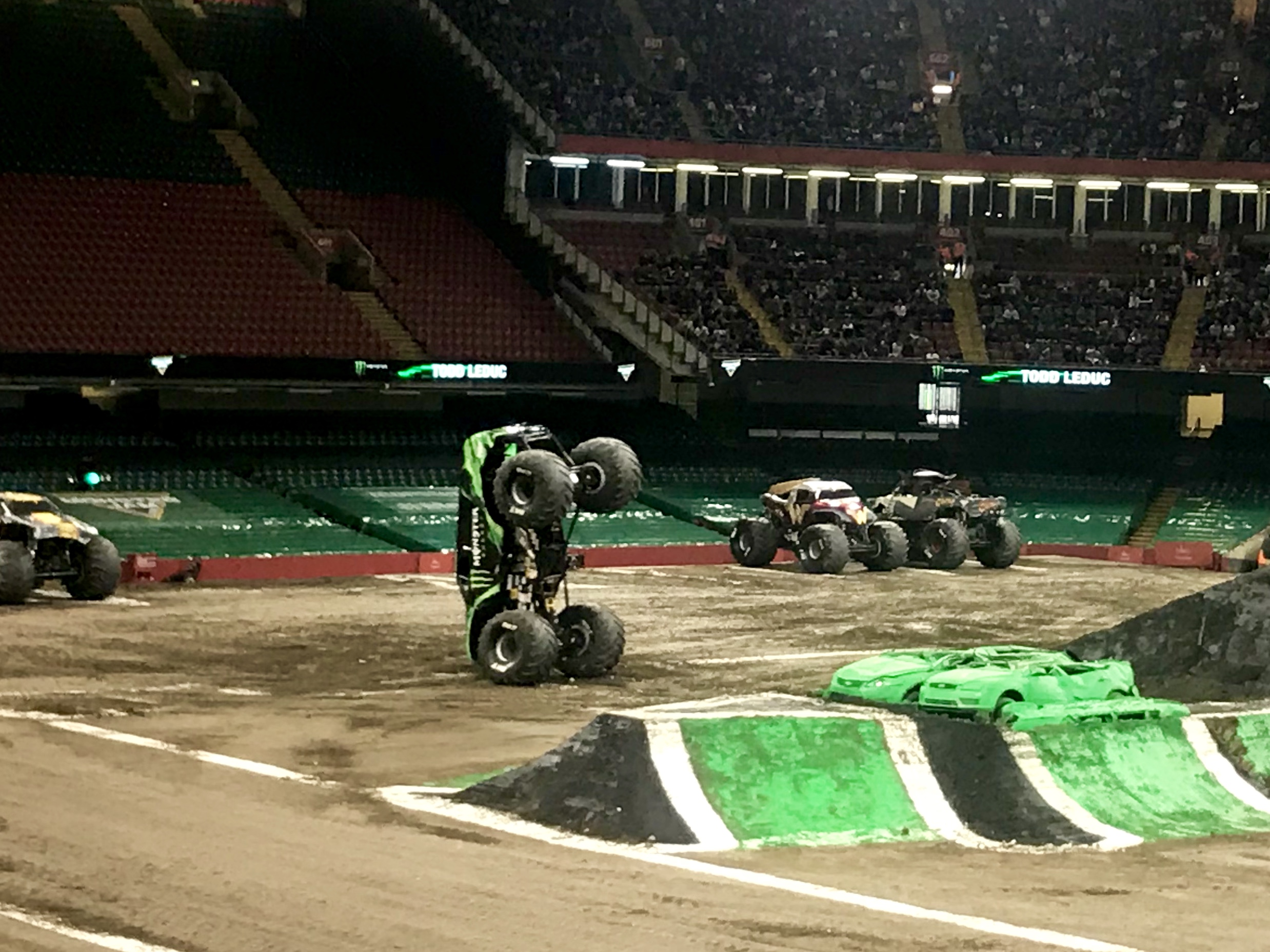 However it’s El Toro Loco who is crowned champion this time as he stands up on two wheels and blows smoke from his nose. The crowd give him 9.158, making him the champion of this round by a clear margin. “It’s one of the greatest feelings,” says driver Mark List.

After all that action, it’s time for a half time break… 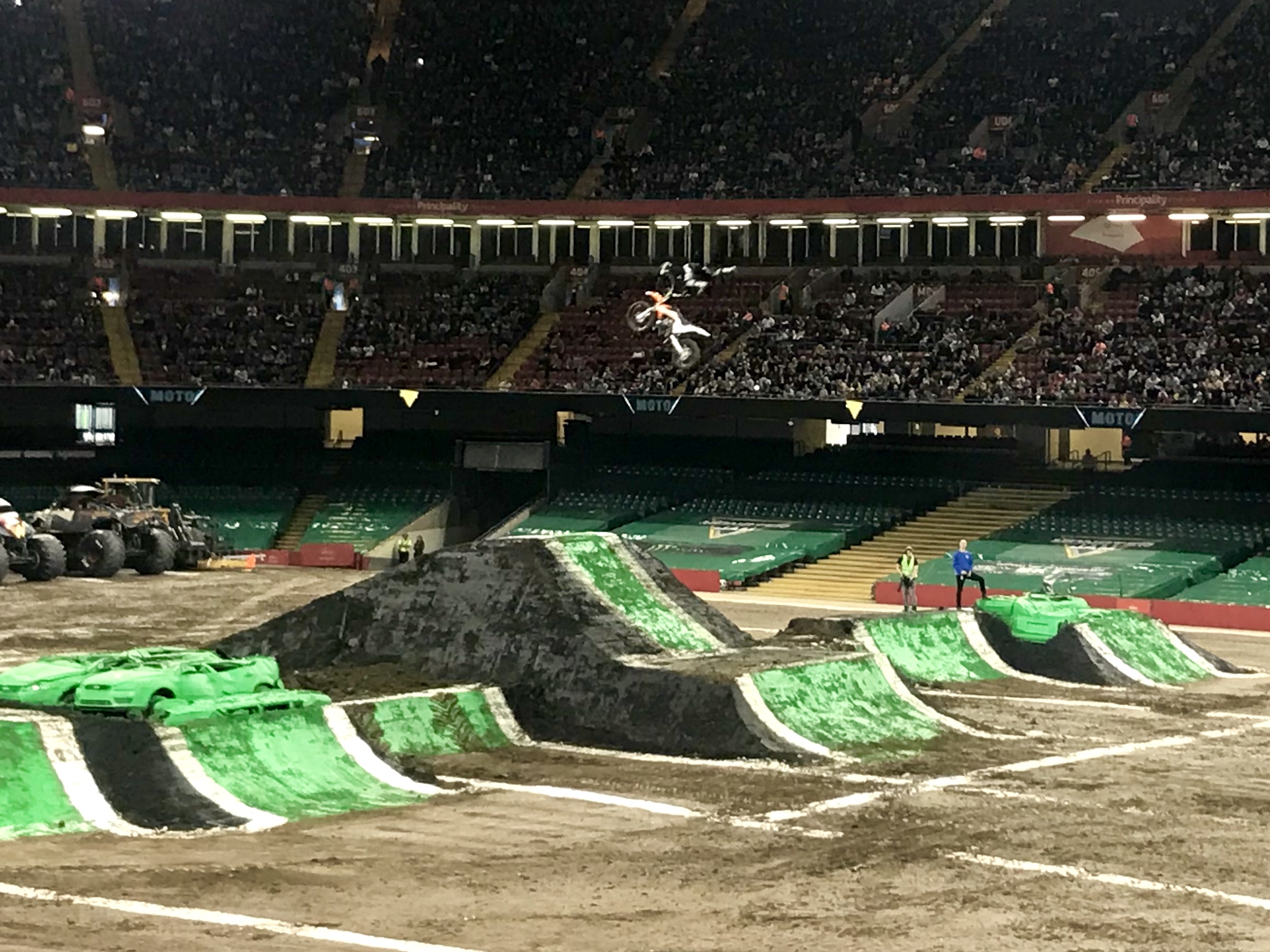 After the intermission, we’re treated to a display of daredevilry and intense skill from a group of freestyle fmotocross motorcycle stunt riders. They build up speed as they head up a ramp and then as the bikes jump into the air, the riders indulge in all sorts of tricks including letting go of the handlebars, or holding onto the handlebars and jumping off the seat while in mid air, or jumping and twisting. It’s as terrifying as it is impressive. British driver Chris Brock wins this event with a score of 9.262 with a backflip trick he calls a flip whip.

The final event of the afternoon is the freestyle round, where each driver gets two minutes to impress the audience with daring stunts and tricks. The whole thing leaves both open-mouthed in awe and with my heart in my mouth in fear, as trucks leap through the air, move on two wheels and even backflip. 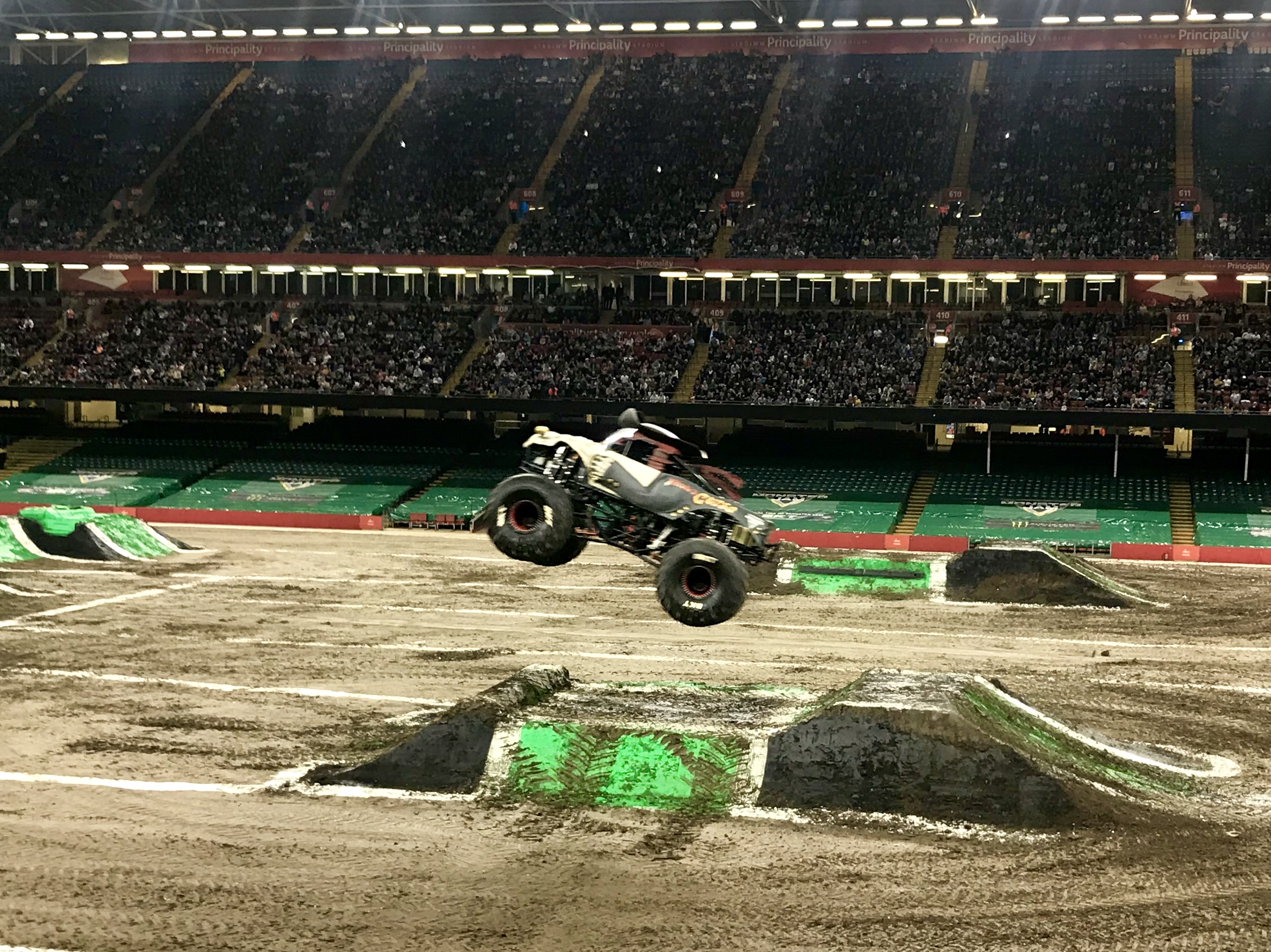 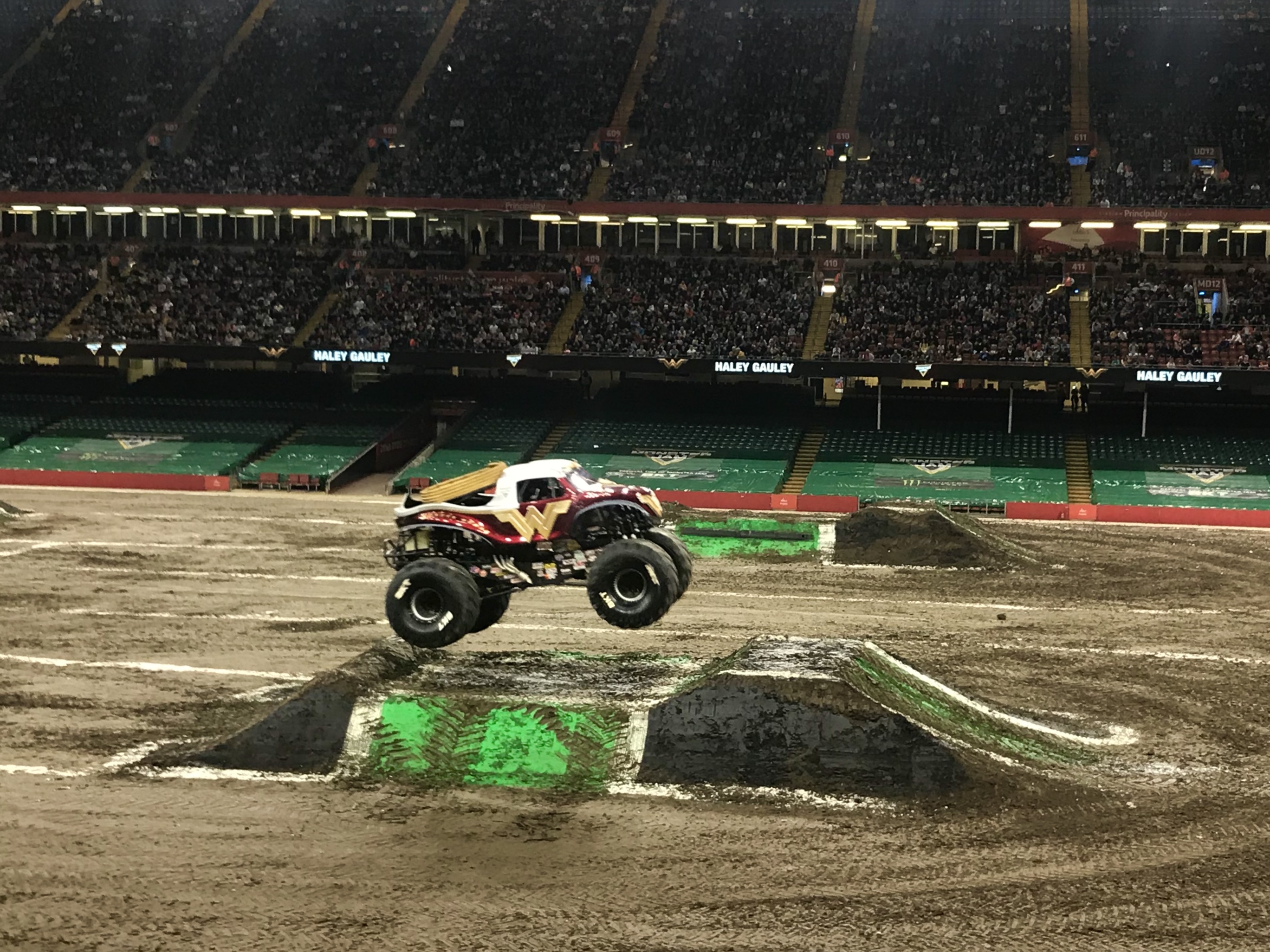 Pirate’s Curse kicks off proceedings with an impressive 7.236 in the audience vote, but Wonder Woman quickly tops that with 7.957 – at one point the car topples backwards but rather than let lie, driver Haley Gauley somehow manages to spin the car around in its back.

Megalodon continues the close scoring with 7.111 – but then it’s not such good news for Scooby Doo who falls over after 20 seconds and admits defeat (but still scores a respectable 5.743) and Zombie who loses various body parts and falls after 50 seconds, but again comes in with 5.947. 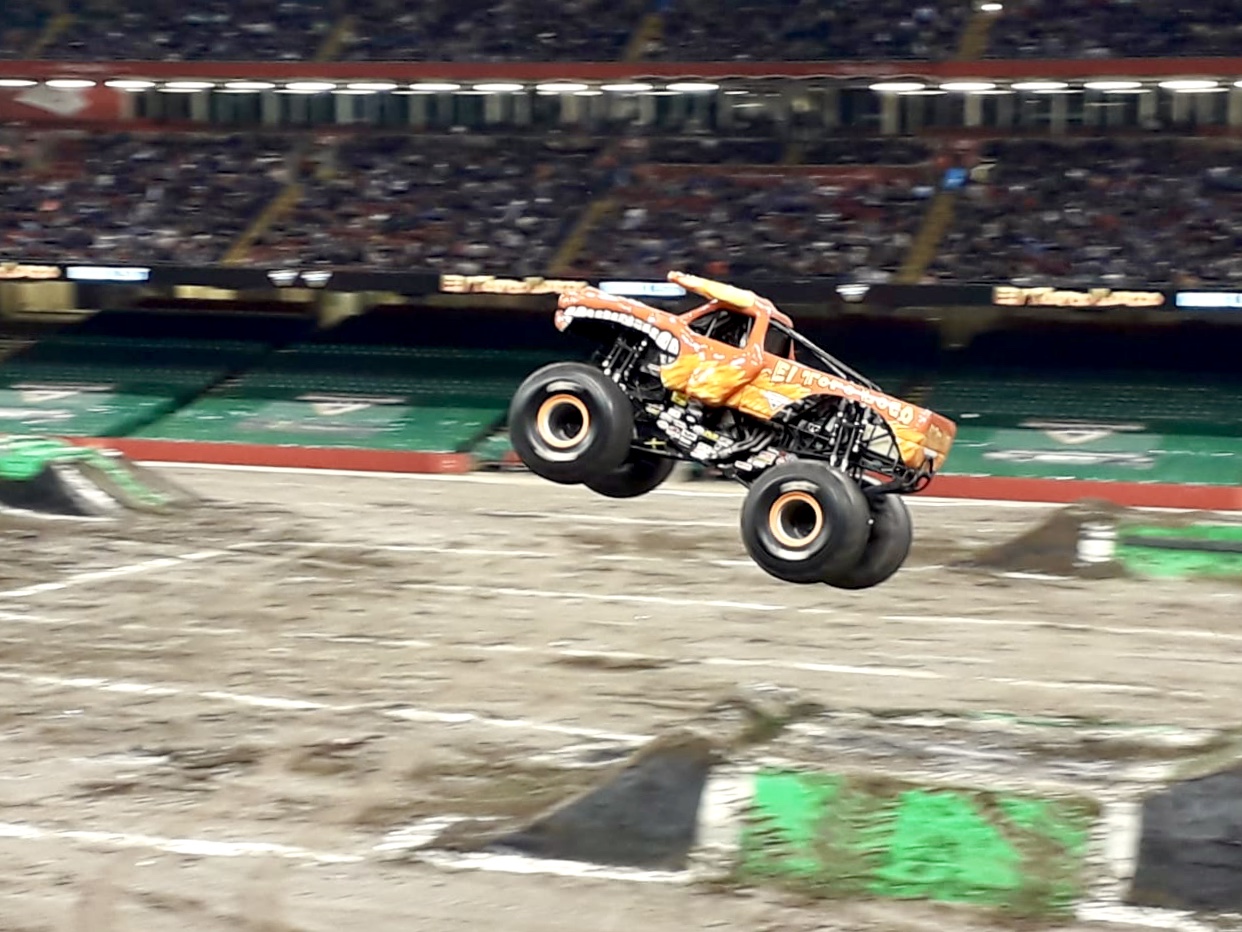 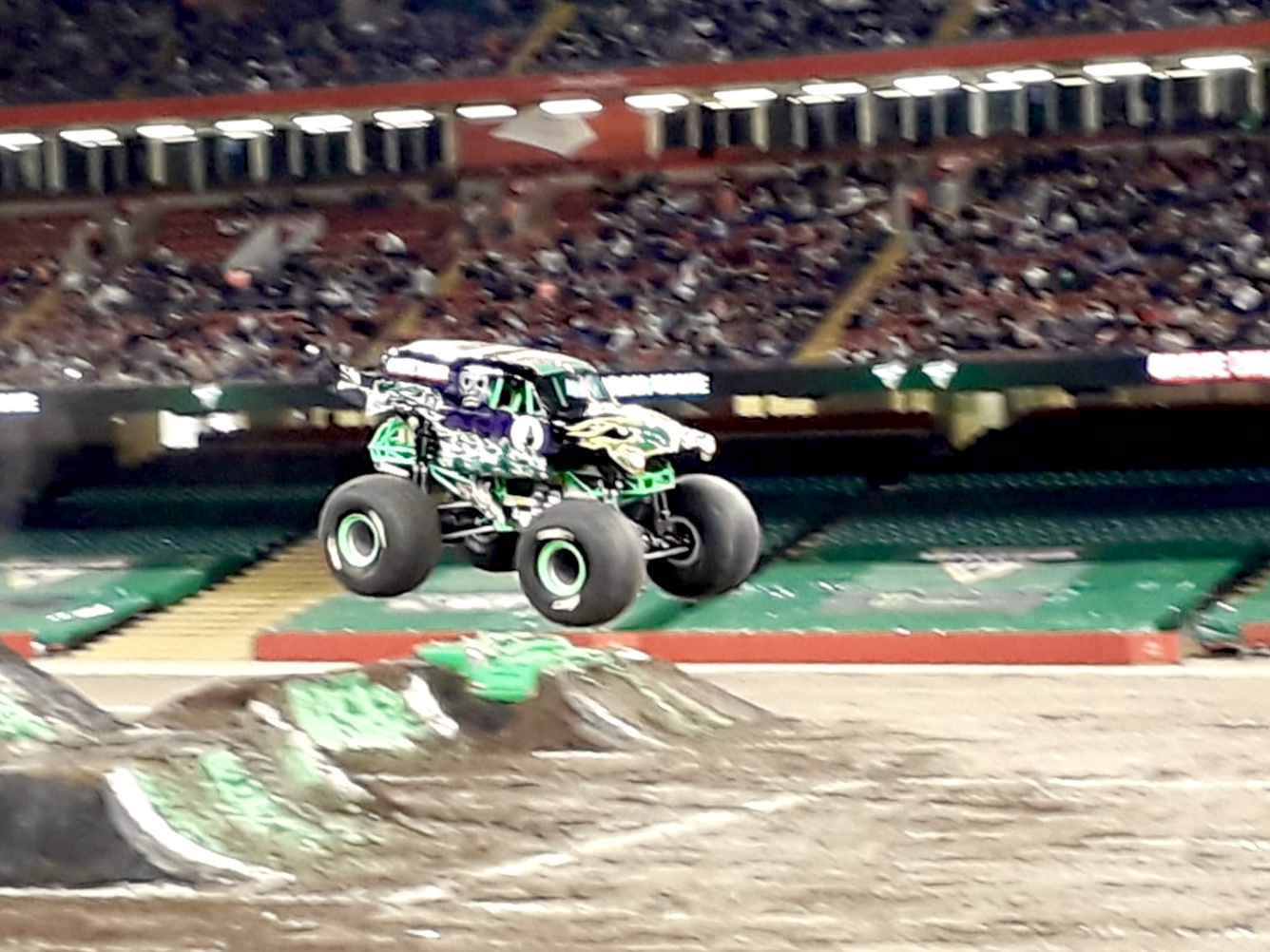 El Toro Loco wows us with an amazing display of jumps and the audience even forgive him for falling over with 30 seconds to go, putting him into the lead with 8,269. Poor Monster Energy falters almost immediately with care trouble, scoring 3.353, before Earth Shaker and Max D hit back with impressive displays that score 7.469 and 7.919. Just when we think it’s an easy win for El Toro Loco Grave Digger puts on the performance of the show, straight away jumping over the biggest ramp on the pitch, and performing an incredible back flip that has us all gasping out loud. The audience score is 9.782, making driver Morgan Kane the freestyle champion. 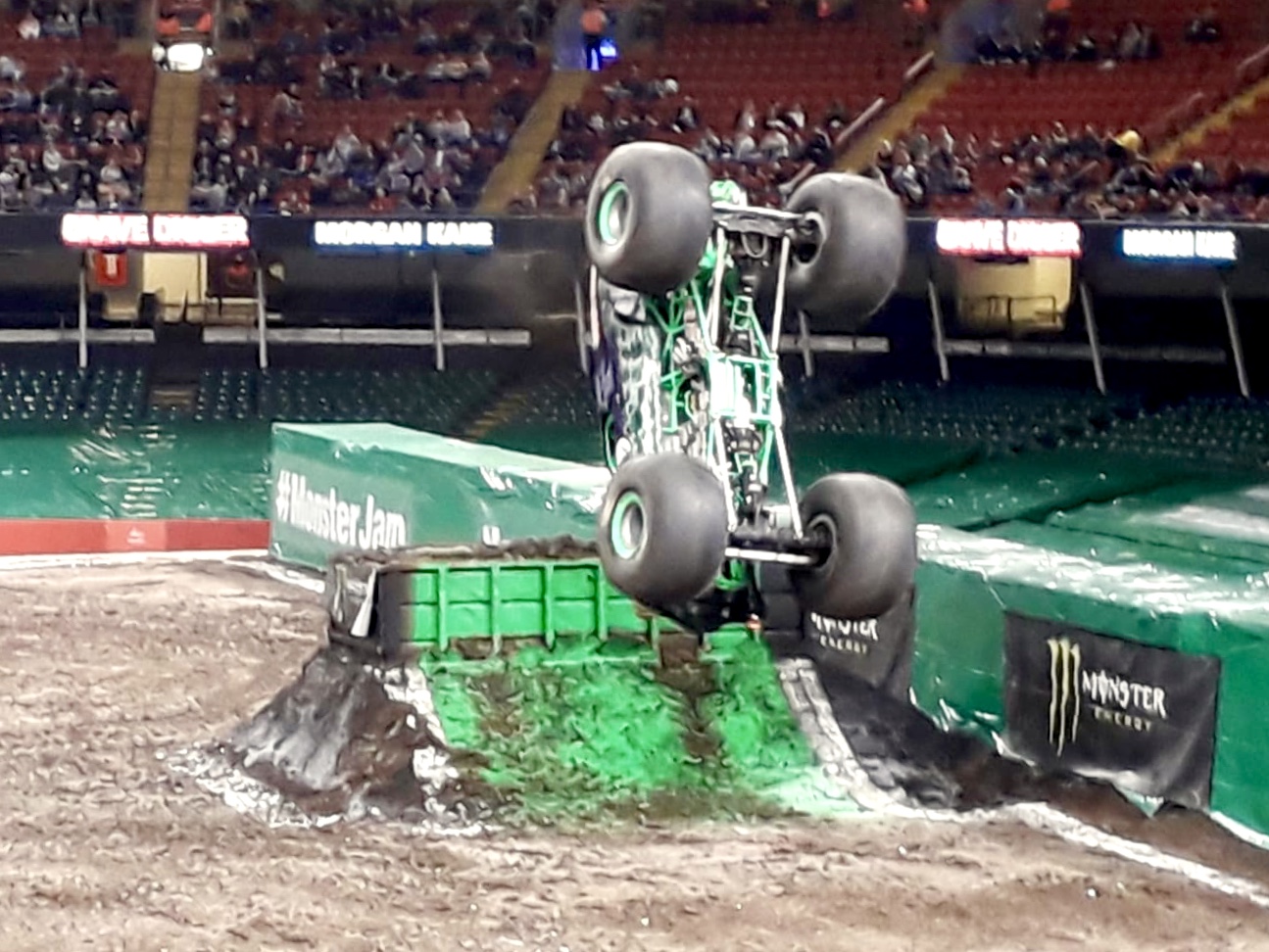 It’s not quite enough to take the event champion title though, with that honour awarded to Mark List and El Toro Loco, with 28 points out of a possible 30.

A worthy winner of an event that impressed and amazed.

We can’t wait for next year!

Did you go to Monster Jam in Cardiff? Let me know your thoughts in the comments below, on the Cardiff Mummy Says Facebook page, tweet me on @cardiffmummy or see more from our day at Monster Jam by following @cardiffmummysays on Instagram.