Like a lot of families, Julia Donaldson is a big part of our life. We have a huge collection of her books, which are so well-read we all know them off by heart. We’re always borrowing the ones we don’t own from the library, and have loved the TV adaptations of some of her most famous titles. We’ve been lucky enough to see several of her books adapted for stage over the years – including Room on the Broom, which we first saw a few years back and which is currently at The New Theatre in Cardiff until Sunday.

Room on the Broom opens with four campers setting up base in an eerie wood. Designer Morgan Lane’s set is very minimal, with just a couple of trees and a giant moon, but it instantly conjures up the atmosphere of the book. 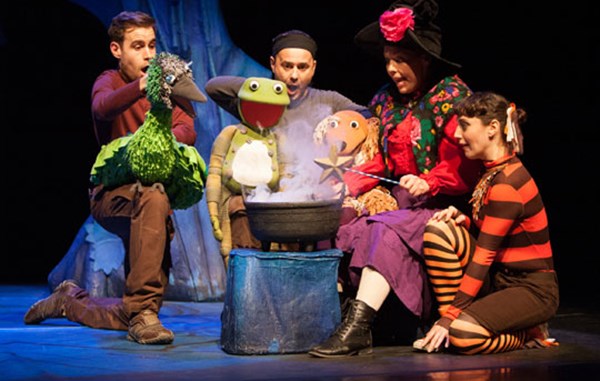 The four friends are convinced they can see something flying overhead… and slowly they morph into the familiar characters from the book.

Amy Harris plays the witch, looking every bit as though she has leapt out of one of illustrator Axel Scheffler’s famous pictures, thanks to her costume and, to quote the book, “long ginger hair which she wore in a plait”.

Catriona Mackenzie plays the cat, who is not happy about having to share the broomstick with the dog, bird and frog they meet each time the witch drops something from the broomstick onto the ground below. When the broom snaps and the gang fall to the ground, the witch is in danger from a dragon whose favourite food is “witch and chips”. Thankfully the cat soon realises he needs to work with the new friends and the witch is saved. 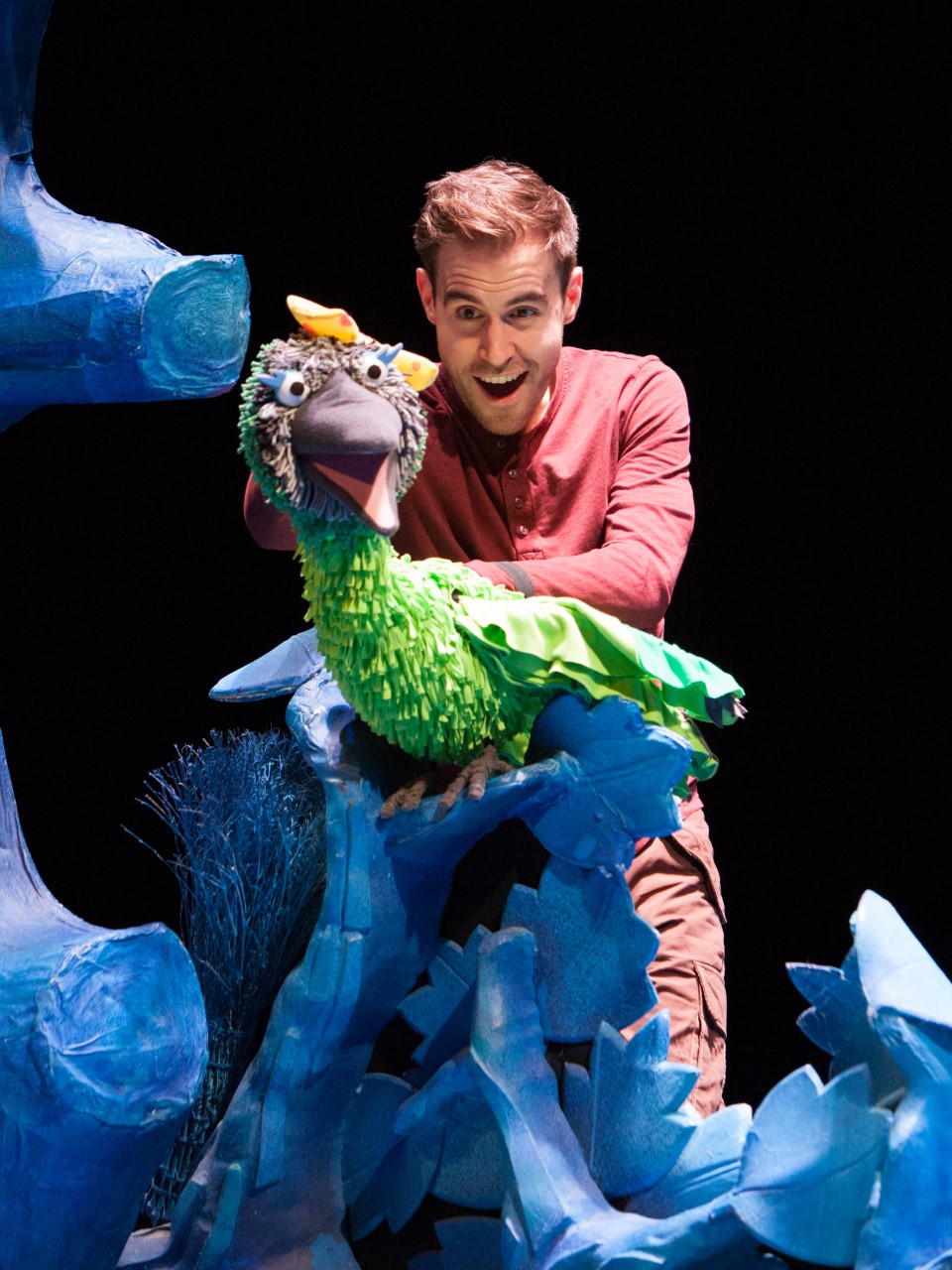 Darren Seed voices the bird and the dragon, both puppets, with many of the young children in the audience imitating the bird’s piercing shriek.

David Garud is the frog and the dog, two parts he plays with much humour. The dog has some great dance moves while the country-singing Kermit-esque frog has the kids laughing along. 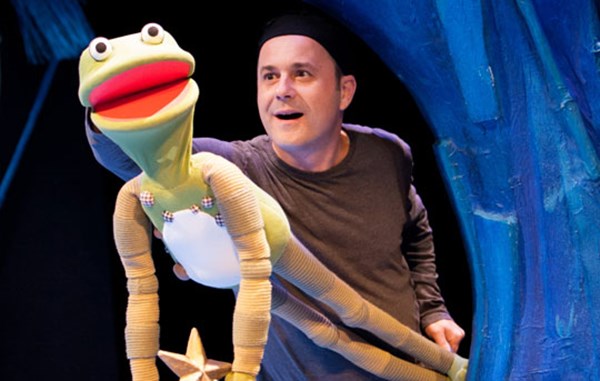 It’s all very likeable stuff, with the 55-minute show remaining true to the book and the additional material, including a number of original musical numbers, fitting in well.

There were a few things I felt could have made this production from Tall Stories an even stronger show. Naturally at a performance like this for young children, there will be noise and chattering. No one expects toddlers, pre-schoolers and even young school-aged children to sit in stony silence for an hour. But it would have helped if the sound levels coming from the stage had been louder, to compensate for this. At times some of the dialogue got lost. 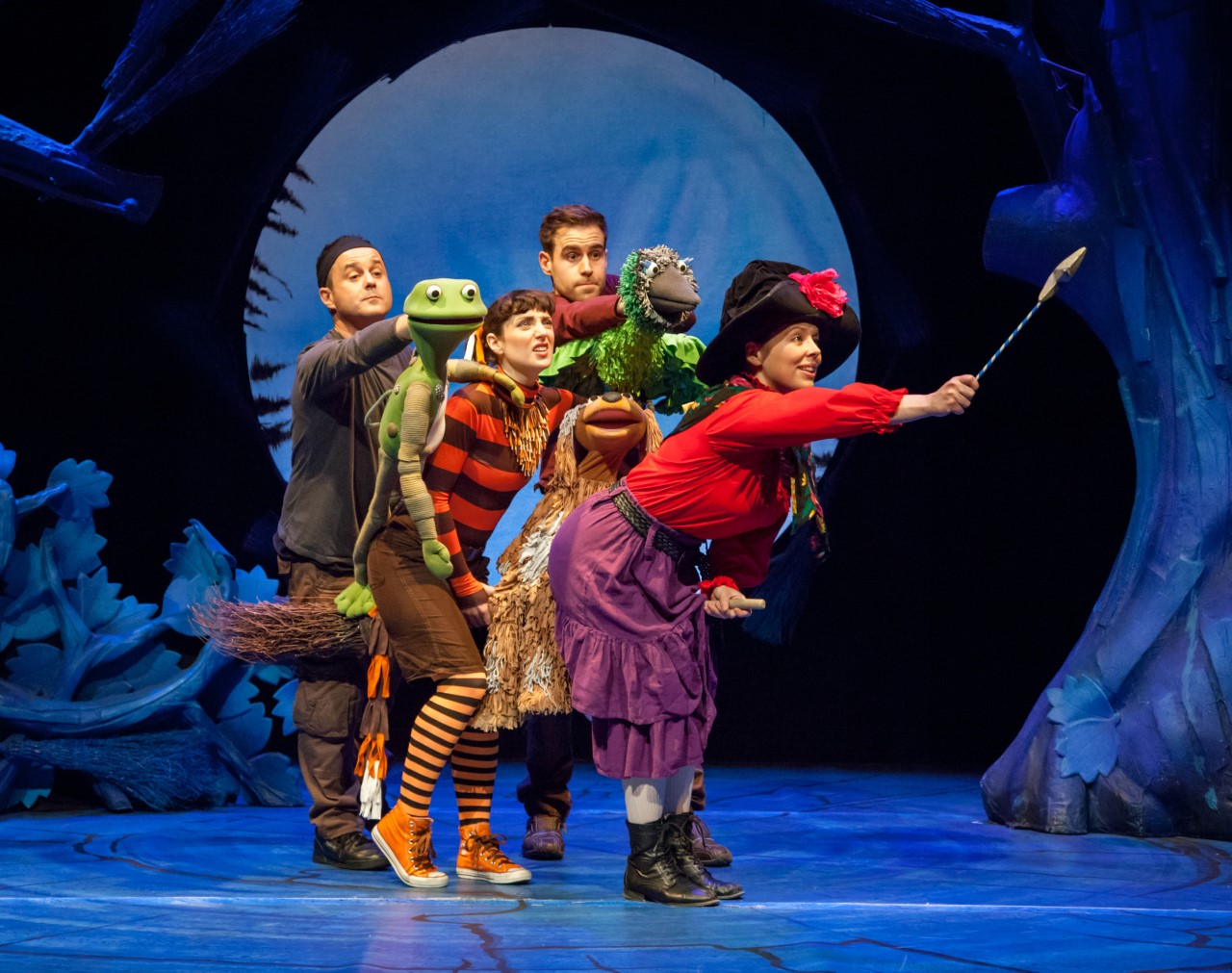 My children, however, didn’t seem to worry about any of this. “It was amazing,” Little Man O told his daddy as he went to bed. Even Little Miss E, who at 7 likes to think she is too old for this kind of theatre and is only there for her brothers, was smiling throughout and singing the songs on the way home. Toddler sat mesmerised for much of the show, only getting restless towards the ends, which is quite understandable considering he is not yet three.

The show is aimed at children aged three upwards but he definitely wasn’t the only one younger than that. It’s also worth knowing that whie buggies are not allowed in the auditorium itself there’s a buggy park downstairs (which can be a bit tricky to access, so do ask for help if you need it!).

The show isn’t perfect, but it is a very likeable staging of a favourite book. My children loved it – and that’s the main thing.

There are limited tickets left. You can book online or call the box office on 029 2087 8889 for availability and details of any last-minute returns.

For more ideas of family-friendly theatre shows in and around Cardiff, see this post.