With the schools about to break up for summer, the cinema is full of family-friendly films for all ages. Whether you’re looking for animated adventures for younger children, sing-a-long feel good musicals or superhero action films, there’s something to suit all tastes.

This guide to what to watch with your family in summer 2018 has been created in conjunction with The Red Dragon Centre.

The Cardiff Bay entertainment complex is home to ODEON IMAX® – the only digital IMAX® screen in South Wales with the ability to show both IMAX® 2D and IMAX® 3D content, as well as a luxury Gallery VIP area with loads of extras. And at the ODEON adults pay children’s prices for family films when purchasing a family ticket.

As well as all the latest film releases as listed below, check out ODEON Kids Club screenings every weekend and every day of the school holidays. These are early morning showings of slightly older films at a bargain price of £2.50 per person.

Once your film has finished why not make a day of it? Parking is free for customers of The Red Dragon Centre subject to minimum spend and ticket validation. You could have a game at Hollywood Bowl or lunch at one of the many family-friendly restaurants at the Centre. Keep an eye on the Red Dragon Centre website for details of meal offers over the summer holidays or spend time exploring the rest of Cardiff Bay .

Are you planning to see any of these films over the summer holidays? Do let me know in the comments below, on the Cardiff Mummy Says Facebook page, or you can tweet me on @cardiffmummy 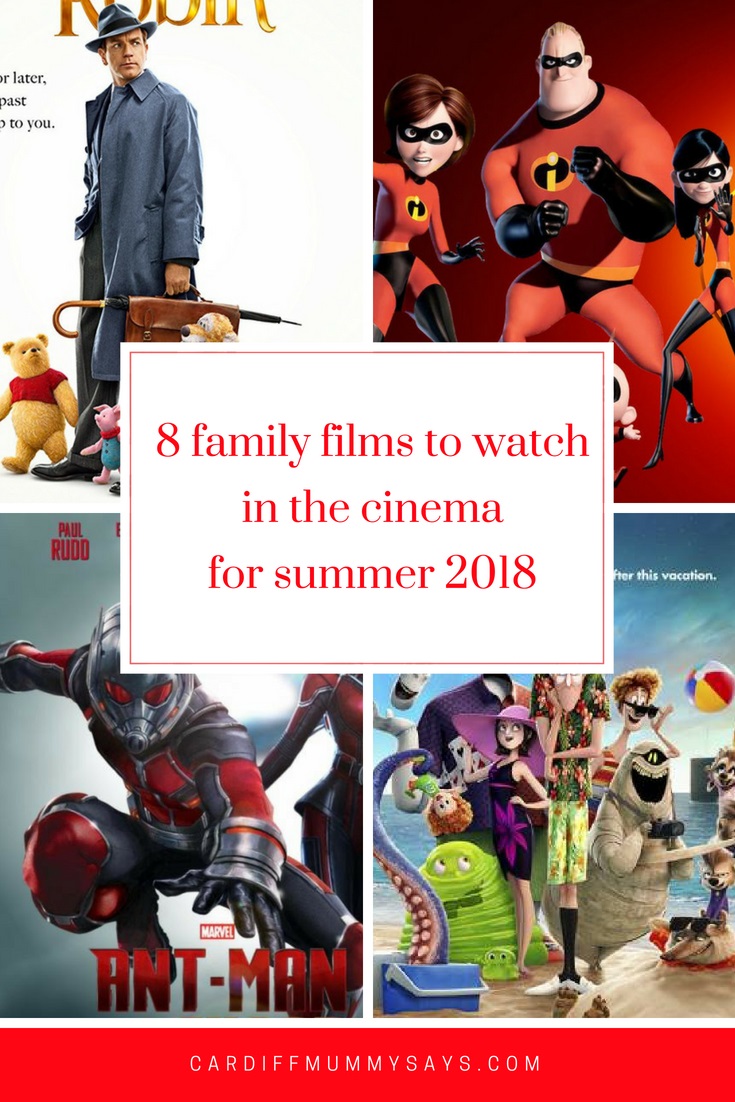 When the island’s dormant volcano begins roaring to life, Owen and Claire mount a campaign to rescue the remaining dinosaurs from this extinction-level event. The dino sequel has been out for a few weeks but will still be showing in selected cinemas over the summer.

The superhero family are back 14 years after their last cinematic outing. Helen (Elastigirl) is the family’s main crimefighter while Bob (Mr Incredible) stays at home to look after the three children. It’s a tough transition, not least because the family is still unaware of baby Jack-Jack’s emerging superpowers. Meanwhile, a diabolical new villain named Screenslaver is on the loose, hatching a dangerous plot. Can the family work together to save the day?

Ten years after the first film and Sophie is pregnant and not sure how she is going to hope. Moving between past and present we follow Sophie as she tries to come to terms with her situation, and discovers how Donna did it all those years ago, falling in love and building a home for her family on their sun-soaked island. Stars Amanda Seyfried, Lily James and Meryl Streep… plus a whole lot of Abba music.

Hotel Transylvania 3: A Monster Vacation (U)

Drac is exhausted from running his hotel – and so Mavis books them a cruise holiday specifically designed for monsters. Drac isn’t impressed at first but quickly settles in. He even starts to fall for the ship’s captain Erika… who is hiding a dangerous secret. The third instalment in the animated adventures reunites the voices of Adam Sandler, Selena Gomez and Andy Samberg.

Thomas heads off on his first global adventure as he leaves Sodor to fulfil his dream of seeing the world. His heroic quest sees him travelling five continents, across deserts, through jungles and over dangerous mountains, as he sees sights he has never seen before. Peter Andre stars as the voice of rally car Ace in the 85-minute animated adventure.

The sequel to 2015’s Ant-Man sees Scott Lang balancing being both a super hero and a father. Hope van Dyne and Dr. Hank Pym present him with an urgent new mission that finds the Ant-Man fighting alongside The Wasp to uncover secrets from their past. Stars Paul Rudd, Evangeline Lilly, Michelle Pfeiffer and Michael Douglas.

What kind of superhero are you if you don’t have your own movie? Cartoon Network favourites the Teen Titans head to Hollywood in pursuit of their dream, confident that they have what it takes to make it. But a new supervillain arrives in town with plans for world domination and the five teenage superheroes find their friendship on the line as they desperately battle to stop him.

Christopher Robin (Ewan McGregor) is now a grown up… but life isn’t easy. He’s in an impossible situation at work and growing distant from his family. He needs help. When it appears in the form of his childhood bear Pooh, he thinks he’s losing his mind – but his childhood friend has a few more lessons for him yet. Return to the Hundred Acre Wood for one more adventure with Pooh, Tigger, Eeyore and Piglet.