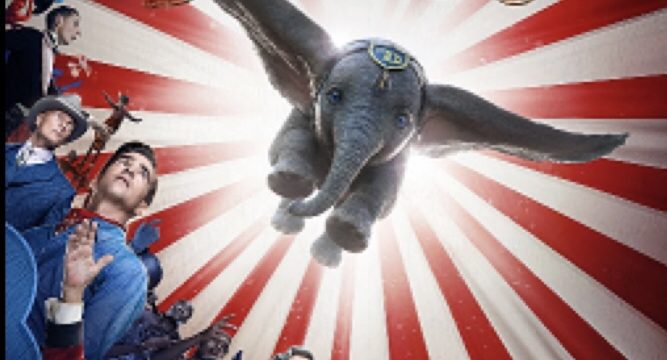 Is a trip to the cinema on your family agenda this month? There are plenty of fantastic films to choose from, with Disney’s live action version of Dumbo having just been released and Missing Link and Wonder Park out in time for the school Easter holidays, and Avengers Endgame hits the big screen at the end of the month. The youngest of cinema-goers can watch all-new episodes in Peppa Pig’s Festival of Fun, while it’s not too late to catch recent successes How To Train Your Dragon 3: Hidden World and The Lego Movie 2.

This post has been put together in association with The Red Dragon Centre as part of Cardiff Mummy Says’ role as family blogger ambassador for the Cardiff Bay entertainment complex. The Red Dragon Centre is home to a huge Odeon cinema, which is the only digital IMAX® screen in South Wales with the ability to show both IMAX® 2D and IMAX® 3D content, as well as a luxury Gallery VIP area with loads of extras!

Tickets at the Odeon are now £5 all day every day, for standard 2D films when booked in the cinema. You can read more here.

Plus the Odeon offers family films for just £2.50 per ticket as part of Odeon Kids. These early morning showings (usually around 10am) take place every weekend and every day during local school holidays. They are a great chance to catch slightly older films on the big screen. Visit the Odeon Kids page here for latest listings.

Parking is free for up to six hours for customers of The Red Dragon Centre (subject to minimum spend and entering your registration number into the terminals at one of the outlets) so you can make a day of it, with bowling and arcade games at Hollywood Bowl or a meal or refreshments at one of the family-friendly cafes and restaurants.

During the Easter holidays, visitors will also be able to take on The Spring Maze, which will be at the Centre from Saturday 13 to Sunday 28 April, open daily from 10.30am-4pm. Constructed using 30 pieces of artificial hedging and 25m of grass walling, the maze will be 4.3m wide at the entrance, 10.4m long and 6m wide at the exit.  As well as six Easter eggs hidden in the maze for children to find, maze runners will have the opportunity to hunt for Easter clues and the chance to win a family day out at The Red Dragon Centre. See the website for full details.

Keep reading on for details of all the family-friendly movies you can watch this month, including those currently showing and those due to be released this month. The earlier release dates may have limited showings over Easter so do check ahead to avoid disappointment.

Have you seen or will you be seeing any of these films? Do let me know in the comments below, on the Cardiff Mummy Says Facebook page or by tweeting me on @cardiffmummy

How To Train Your Dragon: The Hidden World (PG)

The Hidden World is the final part of the film trilogy based on Cressida Cowell’s How To Train Your Dragon books. As Hiccup fulfils his dream of creating a peaceful dragon utopia, Toothless’ discovery of an untamed, elusive mate draws the Night Fury away. When danger mounts at home and Hiccup’s reign as village chief is tested, both dragon and rider must make impossible decisions to save their kind.

Emmet, Lucy, Batman and gang are reunited in The Lego Movie 2, an all new action-packed adventure whre the heroes of Bricksburg must save their beloved city. It’s been five years since ‘everything was awesome’ and the citizens are facing a huge new threat: Lego Duplo invaders from outer space, who are wrecking everything faster than they can rebuild. The battle to defeat them and restore harmony to the Lego universe will take the gang to faraway, unexplored worldsl. It will test their courage, creativity and Master Building skills, and reveal just how special they really are.

The Kid Who Would Be King (PG)

A new twist on the legend of the Sword in the Stone, as old school magic meets the modern world in this epic adventure film. Alex (Ashbourne Serkis) thinks he’s just another nobody, until he stumbles upon the mythical Sword in the Stone, Excalibur. Now, he must unite his friends and enemies into a band of knights and, together with the legendary wizard Merlin (Patrick Stewart), take on the wicked enchantress Morgana (Rebecca Ferguson). With the future at stake, Alex must become the great leader he never dreamed he could be.

(Showing at Odeon Cardiff at 10am on Saturday 6 and Sunday 7 April as part of Odeon Kids, where all tickets cost £2.50)

Brie Larson and Samuel L Jackson star in Captain Marvel. Based on the beloved Marvel comic book series, the movie features the first stand-alone, female-franchise title character in the Marvel Cinematic Universe. A former officer and Air Force test pilot, Carol Danvers becomes the universe’s most powerful hero when Earth is caught in the middle of a galactic war between two alien races, the Kree and the Skrulls. Danvers is a maverick and not easily controlled, but through her journey she finds her true self and the path to harness her incredible powers.

Continuing Disney’s live action remakes of classic animations, Dumbo expands on the beloved classic story where differences are celebrated, family is cherished and dreams take flight. From Disney and visionary director Tim Burton, Dumbo sees circus owner Max Medici (Danny DeVito) enlisting former star Holt Farrier (Colin Farrell) and his children to care for a newborn elephant whose oversized ears make him a laughingstock in an already struggling circus. But when they discover that Dumbo can fly, the circus makes an incredible comeback, attracting persuasive entrepreneur V.A. Vandevere (Michael Keaton), who recruits the peculiar pachyderm for his newest, larger-than-life entertainment venture, Dreamland. Dumbo soars to new heights alongside a charming and spectacular aerial artist, Colette Marchant (Eva Green), until Holt learns that beneath its shiny veneer, Dreamland is full of dark secrets.

We all have a superhero inside us, it just takes a bit of magic to bring it out. In Billy Batson’s (Asher Angel) case, by shouting out one word – Shazam! – this streetwise 14-year-old foster kid can turn into the adult Super Hero Shazam, courtesy of an ancient wizard.

Still a kid at heart – inside a ripped, godlike body – Shazam revels in this adult version of himself by doing what any teen would do with superpowers: have fun with them! Can he fly? Does he have X-ray vision? Can he shoot lightning out of his hands? Can he skip his social studies test? Shazam sets out to test the limits of his abilities with the joyful recklessness of a child. But he’ll need to master these powers quickly in order to fight the deadly forces of evil controlled by Dr. Thaddeus Sivana.

Peppa Pig Festival of Fun (U)

A perfect introduction to the cinema for young fans of the cheeky pig, Peppa Pig Festival of Fun offers a whole hour of snorts and giggles, with songs to sing along to and games to join in with. The screening includes 10 brand new episodes including a two-part festival special, as well as exclusive new interactive entertainment featuring little ones singing and playing along with their favourite onscreen characters. Join Peppa and George in their brand new adventures as they dance in the mud at a children’s festival, celebrate Grandpa Pig’s birthday at a restaurant for the first time, and take a trip to the cinema to see Super Potato’s big movie feature.

An animated comedy in which an explorer sets out to track down a mythical monster. Hugh Jackman is Sir Lionel Frost, a brave and dashing adventurer who considers himself the world’s foremost investigator of myths and monsters – although no one else seems to agree. Zach Galifianakis is Mr Link: the silly but smart beast who Sir Lionel discovers. Fearing he’s the last of his kind, he hopes that Sir Lionel can help him. Along with the independent and resourceful Adelina Fortnight (Zoe Saldana), who possesses the only known map to the group’s secret destination, they set out on a daring quest to seek out Link’s distant relatives. The fearless explorers encounter more than their fair share of peril, as dastardly villains seek to thwart their mission.

Wonder Park is the story of a magnificent amusement park where the imagination of a wildly creative girl named June comes alive. One magical day, June is running through the woods to find her way home where she discovers an old rollercoaster car and climbs inside. She suddenly finds herself in Wonderland, an amusement park she had created in her mind and put aside. All of her rides and characters are brought to life but are falling into disarray without her. Now, with the help of her fun and lovable park characters, June will have to put the wonder back in Wonderland before it is lost forever.7

Adrift in space with no food or water, Tony Stark sends a message to Pepper Potts as his oxygen supply starts to dwindle. Meanwhile, the remaining Avengers – Thor, Black Widow, Captain America and Bruce Banner – must figure out a way to bring back their vanquished allies for an epic showdown with Thanos – the evil demigod who decimated the planet and the universe.

Homepage » Family life » 10 family films to watch in April, including the Easter holidays