Beyond the kids Family lifeSeptember 13, 2018

My stomach has never quite recovered from having three children in just over four years.

I was incredibly lucky that my first two babies left my tummy virtually unmarked. But after my third, it took a long while to lose the baby weight, and when I did the area below my belly button looked like a deflated balloon, all saggy and lifeless folds of skin.

I hate it. I’ve cried so many tears over the state of my belly. I’ve stood in front of the mirror for hours, pulling it flat, wondering if there’s a way to get rid of it. I’ve googled surgery.

I’ve seen all those memes on Facebook about post-natal women being a warrior goddess and owning those tiger stripes. I’ve seen mums sharing their own post-baby stomachs on Facebook and Instagram, breaking taboo and encouraging other women to feel less alone and more confident in their not-so-perfect-bodies. I get it; I really do and I have so much respect for all those #bodyconfidence photos I see on social media. I try to be positive about it but it’s hard.

I have other mum-of-three friends the same age as me with flat and toned tummies that would put a 20-something gym bunny to shame. And yes. I feel resentful and sad. I do yoga. I go to the gym. I run. I eat really healthily. I take vitamins. I use all kinds of body lotions. But this is something no amount of exercise or dieting or cream will fix. If anything, the more weight I’ve lost, the more pronounced the saggy balloon skin becomes. And as for my breasts… I always needed an underwire before children but let’s just say feeding three children each for a year has taken its toll.

It’s massively knocked my confidence. Despite living my life on social media, it’s not something I’ve really talked about publicly before. In fact only one or two close friends really know how I feel.

Cardiff Daddy knows how much it upsets me. He tells me I’m beautiful and sexy and all kinds of lovely things and I know he means them. But it’s not about how he feels; it’s about how I feel. And I don’t feel happy about it. In this age of body confidence I know I’m supposed to love and embrace my post-pregnancy body and while I am full of awe that it’s grown and fed three babies…. sometimes I don’t love the end result.

I’m 5’0 tall, a size 8. I weigh about half a stone more than I’d like to. For as long as I can remember all my excess weight has settled around my tummy, but I work hard to keep fit and I know I’m generally lucky with my physique.

Which makes it hard to talk about body issues without people telling you that you‘ve got nothing to worry about. When you’re a size 8 and not a size 18, and you are carrying a few extra pounds rather than a few extra stone, people become dismissive.  It’s probably why it’s taken me so long to write about this on Cardiff Mummy Says. That and fear of being judged for admitting to being less than perfect. You’ll probably look at these photos and wonder what I’m talking about… but you’ll notice they’re all taken from behind.

Living in the UK, we don’t have much cause to have our flesh on display for most of the year so my saggy tummy is something I’ve been able to keep quite literally under wraps.

But then last year we went to Rome for our first foreign holiday as a family, my first time abroad in nine years, to a campsite with a swimming pool.

I packed my one-piece swimming costume to take with me. It didn’t even occur to me to look for a two-piece because I felt sure my bikini days were over.

But within hours of being at the pool on our first day, I suddenly became aware I was one of the only women on the site wearing a two-piece. Instead of feeling confident that my bits were covered up, I felt self-conscious, dowdy and mumsy.

The Italian women had no qualms at all about their bodies. Stretch marks and flabby bellies were on display without the slightest indication of self-consciousness or worry. I have no idea if that’s how they felt inside, but externally that’s the impression they gave. Granted, their beautiful weather means they spend a lot longer in the sunshine, at the pool or the beach, than we do so wearing a bikini probably becomes second nature. For many of us British women, our annual summer holiday is our only foray into bikini-wearing territory. It’s no wonder so many of us panic and lack confidence. 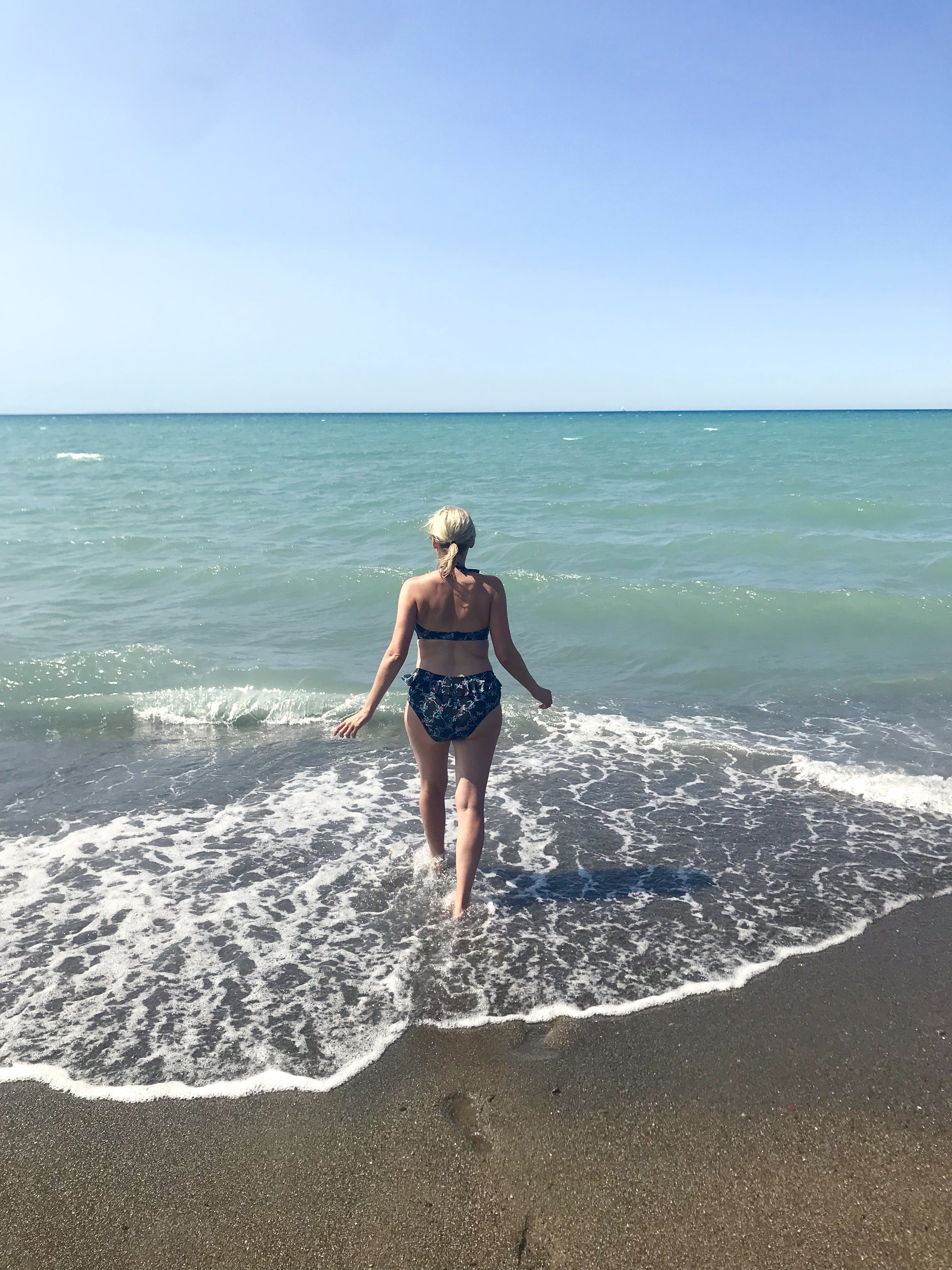 This summer I bought a new one-piece, a lovely striped blue and white number that seems to flatter me in all the right places.

But I also bought a bikini. The first one since I became a mum. It wasn’t easy. I must have tried on around 40 and they all made me feel like crap. I found myself in tears in the changing rooms in one shop.

But then I found it, on the sale rack in Debenhams. A black and floral number by Floozie, with bottoms that were big enough to cover up to my belly button without making me look like I was channelling some kind of granny chic. The top had underwires and a halter neck. This was the one.

When we arrived in Tuscany, it still had the labels on it. I thought about wearing it on our first day and then chickened out.

In fact it took me four days into my two week stay to pluck up the courage. I didn’t feel so bad in my one-piece on our first couple of days because we spent these mostly around the pool. You could spot the British mums a mile off because they were the only ones not in bikinis. But at least we were all in solidarity. But on the third day we went to the beach and I was yet again so self-conscious about being the only woman in a one-piece. Even the women who looked to be in their 70s and 80s had their midriffs on display.

So I faced my fears. The next day I put on my bikini for a day at the beach, and here’s what happened.

No one pointed or laughed at me.

My children said nothing.

No one batted an eye-lid.

Except I swam in the water with my children for hours.

We floated on the waves. We played catch and piggy in the middle. We snorkelled.

We had a wonderful time.

And I felt a tiny bit more confident about myself.

Not so confident that I’m happy to publish a photo from the front on the internet for all to see. But baby steps and all that.

Thinking back to how worried I’d been about such a non-issue suddenly seemed slightly ridiculous.

Yes, I’d love it if I had washboard abs and boobs that still looked pert in a stringy triangle bikini. Sadly that’s not meant to be. But that’s not to say I can’t still wear a bikini.

And perhaps seeing me, a 40-year-old mum with a flabby, stretched tummy wearing a bikini on the beach might make someone else realise she can do the same too.

Can you relate to my feelings on wearing a bikini and post-baby bodies? I’d love to know your thoughts in the comments below, on the Cardiff Mummy Says Facebook page, or you can tweet me on @cardiffmummy