is it okay to argue in front of your children? family life, relationships

Cardiff Daddy and I had an argument this morning. It wasn’t over anything serious, just something stupid that quickly escalated. We both lost our tempers and shouted a little louder than we probably should have, both of us adamant we were right. Nothing unusual in a relationship – but our children were nearby when all this was happening. I’ve been feeling guilty and upset about it all day and asking myself whether it is ever okay to argue in front of your children.

It’s not the first time we’ve rowed in front of them. Don’t get me wrong, it only happens occasionally. We’re not talking about an unhealthy or abusive relationship here. But like almost all couples I know, we have tiffs, we bicker and we row from time to time. And sometimes it happens in front of our three children. 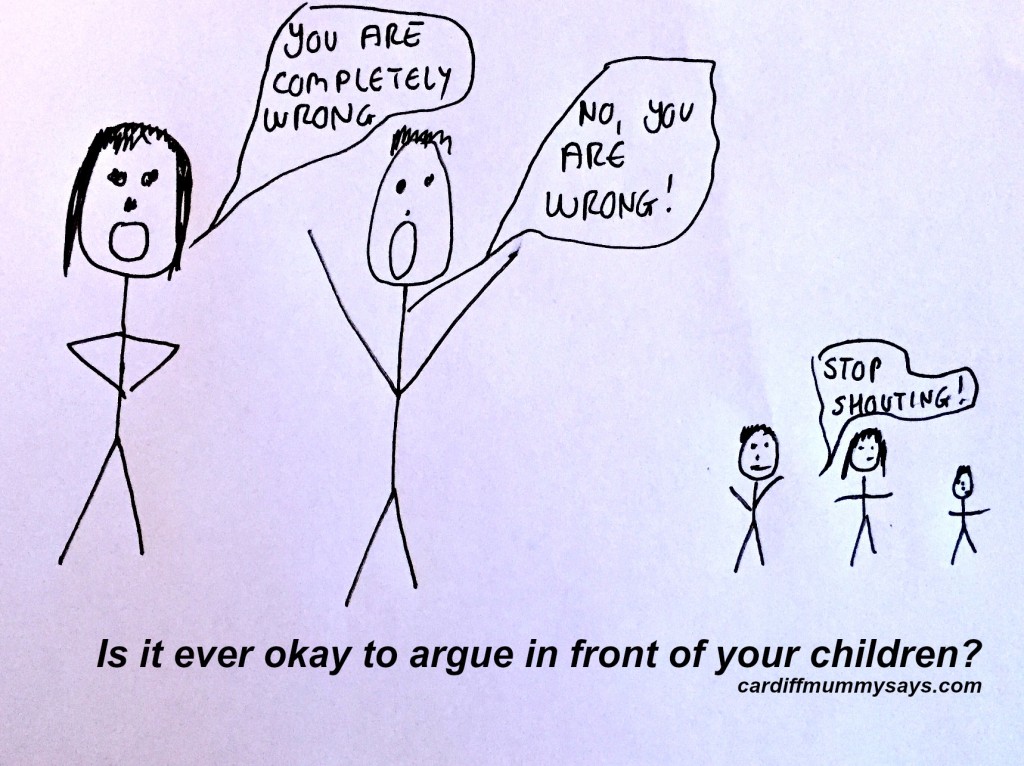 But I still feel bad about them seeing me shout and argue.

I’m reminded of the episode of Friends where Chandler and Monica have their first argument and he presumes it signifies the end of their relationship. Monica tells him it’s just a fight, you move on. She realises his inability to make up after a row is why he’s never had a long-term girlfriend. “Welcome to an adult relationship,” she tells him.

My close mummy friends tell me I shouldn’t feel too guilty. “Arguments in front of children are not necessarily bad,” one of them tells me. “What makes them healthy is firstly that we acknowledge that disagreements do happen. Trying to pretend that they don’t isn’t healthy. The important bit is showing how we say sorry. We always say that not showing feelings is not healthy as it encourages children to internalise feelings leading to negative coping strategies.”

“I think they need to see that side of life,” another friend says. “If our daughter has ever looked upset about it we would tell her it’s just Mummy and Daddy disagreeing on something, but it’s okay and that we still love each other.”

“I don’t want the kids to be frightened of shouting,” says one friend, “but also I don’t want them to think it’s normal. It’s a balance, I think. I have a glare, where my husband usually knows he’s gone too far.

“Either that or my son will tell him Mummy is the boss!”

And that’s the thing about children. There is nothing like a humorous quip from them to stop you in your tracks.

Cardiff Daddy left the room after our row. “Daddy,” Little Miss E and Little Man O said to him sternly, “Your paddy is NOT acceptable.”

And then a knock on my door and the two of them chorusing in unison. “Mummy, your paddy is NOT acceptable.”

It made us both see the ridiculousness of our row and we hugged and made up.

There’s nothing like being put in your place by a five-year-old and a three-year-old. How can you argue with that?

What do you think? Is it ever acceptable to argue in front of children? I’d really love to know what you think either in the comments below, on the Cardiff Mummy Says Facebook page or on by tweeting me on @cardiffmummy

Homepage » Family life » Is it okay to argue in front of your children?

24 Comments to Is it okay to argue in front of your children?