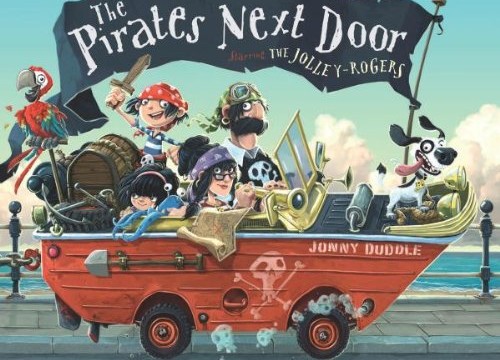 books about pirates, books for children, children's books, reading, The Pirates Next Door by Jonny Duddle

A while back, I wrote a post recommending seven picture books for children who love pirates.  A few people told me I should check out The Pirates Next Door by Jonny Duddle as they and their children loved it. I have a real fear of missing out when it comes to children’s books and so I read the reviews on Amazon, decided it sounded great, and ordered it as a birthday present for Baby Boy I’s first birthday back in March. He’s probably a bit young for it at the moment, but the rest of us love it and it’s become a firm favourite in our bedtime story repertoire. 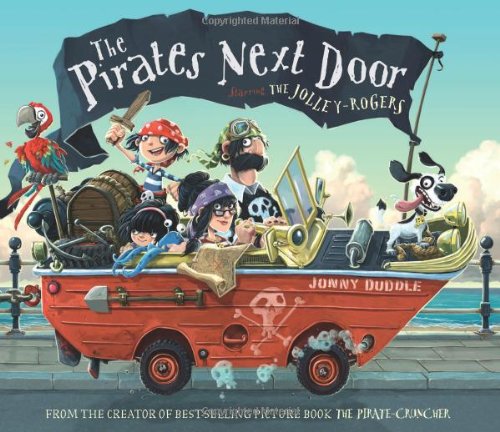 The Pirates Next Door tells the tale of Matilda, a little girl who lives in a gloomy seaside town, Dull-on-Sea. One day, new neighbours move in next door – a family of pirates, taking a break from the seas to fix their ship.

Matilda thinks it’s fantastic to have such exciting neighbours, especially a young lad her age, Jim, who’s dressed in a pirate bandanna and an eye-patch. However, her mum, dad and the other neighbours are not so impressed with these new residents, The Jolley-Rogers, and tell her they’d rather she was friends with “normal girls and boys”.

The other residents accuse the pirates of terrorising the neighbourhood, being dirty and having lice, and their ship being full of rats. However, Matilda still insists on sitting next to Jonny at school as she thinks he’s “cool”. He tells her the pirates are used to this kind of reaction whenever they come to land – and when they finally depart, the neighbours discover just how wrong they were about the pirates after all.

That might make the book sound a bit worthy. And while it does have a message about tolerance and prejudice, it’s subtly hidden in an adventurous tale, written in wonderful rhyming verse and accompanied by vividly detailed and engaging illustrations.

It’s a lot longer than other picture books, so age-wise I’d say it would appeal to children of three and above, with a reading age from 6 or 7. I asked Little Miss E, age 5, and Little Man O, 3.5, what they thought of the book and while it was the humour and the pictures that really impressed them, they quickly understood the message about not judging people and always being kind.

This is a fun and adventurous book with wonderfully-detailed illustrations and fast-paced, descriptive verse that you will be happy to read time and again. We highly recommend it.

Have you read The Pirates Next Door by Jonny Duddle? What did you and your little ones make of it? Do let me know in the comments below, on the Cardiff Mummy Says Facebook page or by tweeting me on @cardiffmummy

You can read all of my posts about children’s books here.

I am a member of Amazon Affiliates.

Homepage » Books » Children’s book of the week: The Pirates Next Door by Jonny Duddle

4 Comments to Children’s book of the week: The Pirates Next Door by Jonny Duddle