The big talk of the playground for Little Miss E and her friends is wobbly teeth and visits from the tooth fairy. Most mornings at drop off, one of her little friends will run up to me to show me a tooth hanging on by a thread or a big gap where a milk tooth once was. It’s the same at her after-school activities. When you’re between the ages of five and eight, wobbly teeth are a big deal.

Miss E is not yet six and a half – and has lost eight teeth so far. For the last year or so, her mouth has been a higgledy piggledy mess of big teeth, wobbly teeth and big gaps. But she thinks it’s amazing and, just like her friends, loves to tell people all about her teeth.

In fairness, she has some good stories to tell, because there’s been some kind of drama associated with all but one of her teeth that have fallen out.

Her first one started wobbling pretty much as soon as she turned five. I didn’t believe her at first as I thought she was far too young for wobbly teeth – but I had a feel and there was definite movement. She was beyond excited. I, however, really wasn’t ready for this next stage and found it all quite emotional. It all seemed in such contrast to her baby brother, Toddler Boy I, who was rapidly gaining his baby teeth. 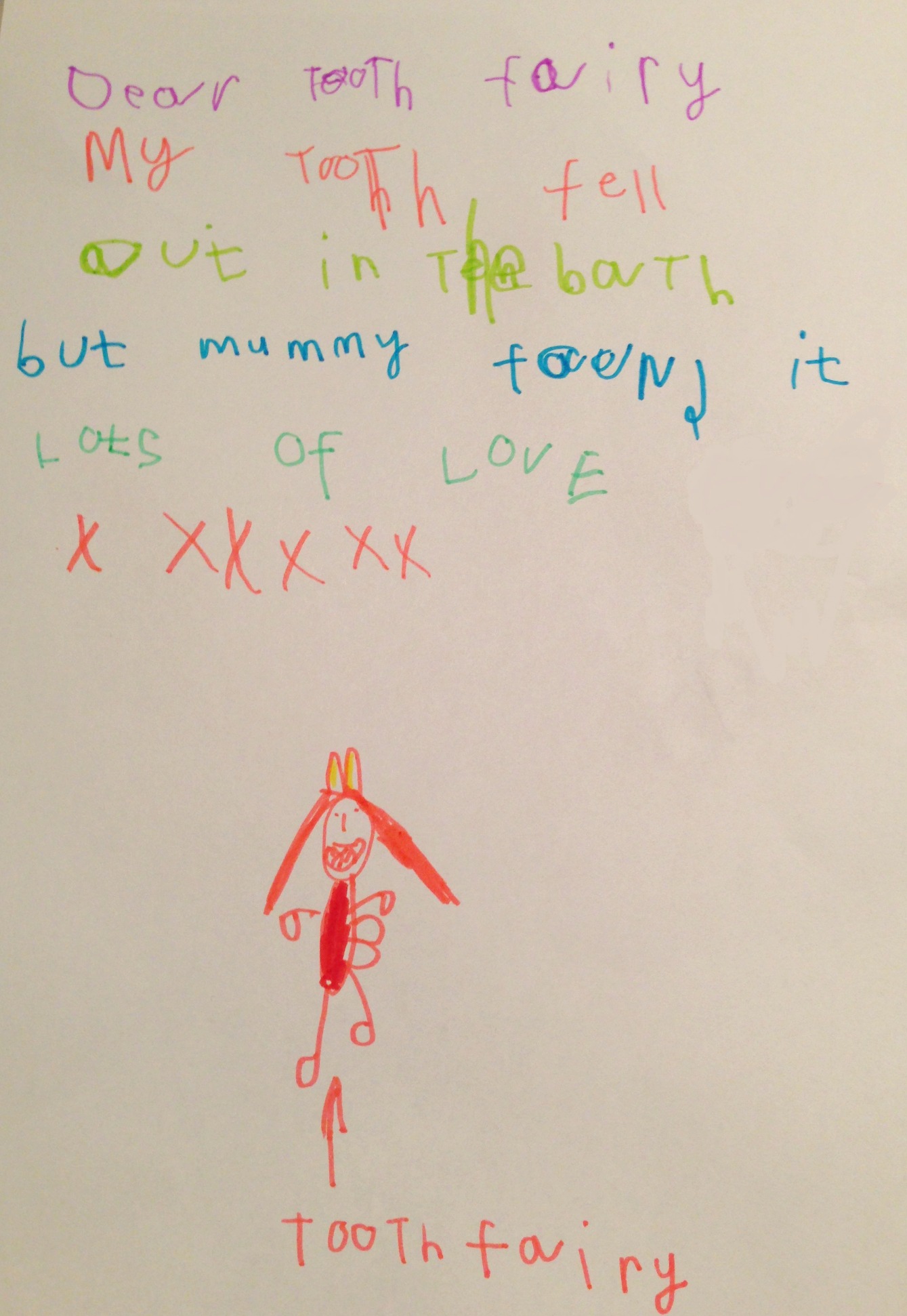 That first tooth fell out in the bath. Having spent every day for weeks wondering if today would be the day she could put it under the pillow for the tooth fairy, she was hysterical at the thought it was lost. Thankfully, I swished my hands around in the water and managed to find it. Not easy with three kids, including a wriggly toddler, in the bath. She wrapped it in a tissue, wrote a note and drew a picture for the tooth fairy – and was rewarded in the morning with a shiny £2 coin. I’d double-checked the going rate among our friends to make sure we were consistent and apparently it’s £2 for the first tooth and £1 for the others.

The second tooth fell out on top of her pizza one tea time a couple of weeks later. Luckily, she realised before she accidentally ate this additional crunchy topping. Again, she wrote a letter for the tooth fairy and drew a picture of her tooth on the pizza.

The third tooth was a stubborn little thing that was wobbling for weeks but just would not fall out, despite my best efforts at helping it. Cardiff Daddy won’t touch wobbly teeth because he says the idea turns his stomach, so I am chief tooth-wiggler in our house.

I spent ages trying before bed time one night. But obviously I didn’t try hard enough – because the following morning, she woke up and there was a new gap in her mouth… but no tooth. We searched her bed, bedding and floor for the tooth but to no avail.

Miss E was distraught. “What does the tooth fairy do when a child has swallowed a tooth?” I asked my Facebook friends. Apparently it’s not too uncommon and several friends told me the same had happened to their little ones. Let the tooth fairy know what’s happened and she’ll still leave a coin, was the resounding reply.

The same very nearly happened a few weeks later with the fourth tooth. We tried to get it to fall out before bed one night, only for Miss E to wake at 2am, excitedly bursting into my bedroom with a teeny tiny tooth in her hand. “Maybe she’ll come tonight!” Miss E grinned. And so, we put the tooth under her pillow, she went back to bed and the already-knackered tooth fairy had to stay awake to make sure a £1 coin made its way under her pillow once Miss E was soundly sleeping.

Number five was another saga. I picked her up from school one day and her teacher called me over. “Oh crap,” I thought to myself. “What’s happened?! What’s she done?” It turned out that the tooth – which hadn’t been especially loose that morning, had fallen out in the yard during play time and no one had been able to find it. Another letter to the tooth fairy explaining all…

Tooth six fell out without any drama. But then came number seven. It had been hanging by a thread but despite Miss E constantly wobbling it, it didn’t want to fall out. One night before bed, it started bleeding. There was no way I wanted Miss E to swallow another one in her sleep, and no way I was sending her to bed with a mouthful of blood, so I wobbled and wobbled it until it fell out. 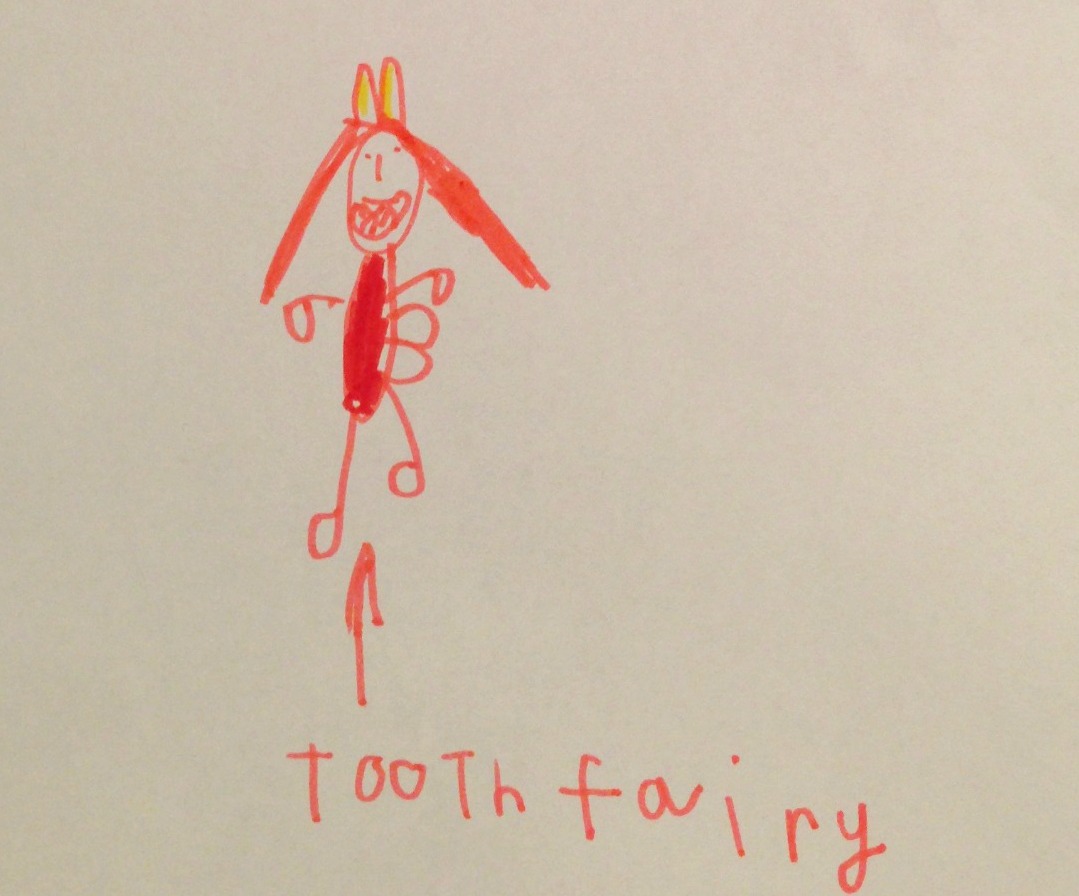 And then two weeks later, number eight fell out while exploring The Cardiff Story museum in the centre of Cardiff during the Easter holidays. Miss E isn’t sure exactly when or where it happened, but we had looked for it as much as we could. Miss E told another little boy she was searching for her tooth. “You are looking for a tiny milk tooth in a big museum?” he asked. “I think it will be really impossible.” Yep, exactly. Needle and haystack were the words that came to my mind. We couldn’t find it and so the tooth fairy received another explanatory note.

So that’s eight teeth lost before the age of six and a half, and seven of them with some kind of drama. Miss E is disappointed now because for the first time in well over a year she has no wobbly teeth to get excited about, although I’m sure it won’t be long before her back teeth start to loosen and the sage starts again.

She was very excited to show the dentist her new teeth when we visited recently. But the biggest shock came when he checked Little Man O’s mouth. He’s four and a half and the dentist said he could already see the adult teeth in his gums – and he was certain it wouldn’t be long before he starts getting wobbly teeth too.

I’m just hoping his will fall out without as many incidents as his big sister!

How old was your child when they started losing their teeth? Did you have any incidents of lost or swallowed teeth, or any drama when they fell out? Do let me know in the comments section below, by tweeting me on @cardiffmummy or joining in the discussion on the Cardiff Mummy Says Facebook page.

For all my blog posts on parenting, visit the Family Life section of Cardiff Mummy Says.