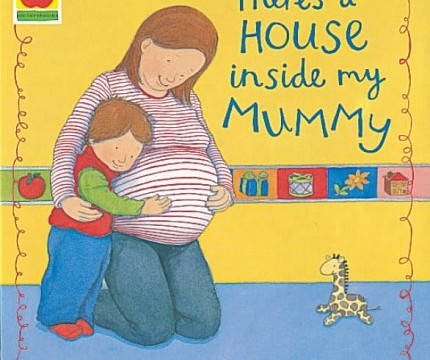 I’m a great believer that whatever you are going through in life, there will be a book to help you through it. This is especially true for young children who have to face so many new and unsettling situations in their lives with little experience of how to deal with them.

Becoming a big brother or sister is one of the first life-changing events many children will go through. When I was pregnant with number two and number three, I worried so much about how Little E and Little Man would cope. Would there be any jealousy? Would they hate the baby crying? Would they resent me for having to split my time between them, especially in the early days when newborns need so much care and attention? I did everything I could to make them feel as reassured and loved as possible – introducing them to friends’ babies, showing them their own baby photos, getting them to help choose things to buy for the baby, asking them if they would like to talk to the baby through my belly button so the baby would recognise them when he or she was born, buying them a present from their new sibling, and – of course – reading books about new babies to them. There are countless titles out there but here are four that we particularly liked.

1. There’s a House Inside My Mummy by Giles Andreae and Vanessa Cabban 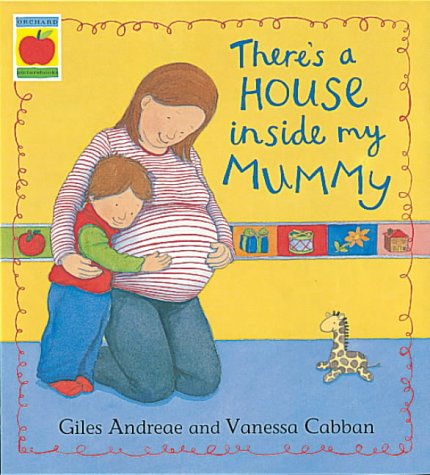 “There’s a house inside my mummy where my little brother grows, or maybe it’s my little sister, no one really knows.” And thus begins one of the all-time favourite books in my household, one which every member of our family who is old enough to speak can recite off-by-heart. We see mummy getting funny cravings, falling asleep on the sofa because she is so tired, the boy in the story speaking to his growing brother or sister through mummy’s “tummy telephone”. He tells us he will share his toys with the baby and teach him all sorts of things. Little E adored this when I was pregnant with Little Man. We read it almost every day for months. She was 21 months old when Little Man was born but in the lead-up to his birth she could recite many of the lines from the book herself. After her new brother arrived we read it frequently…. and naturally when I got pregnant with Baby I, it was the first book we read after we told them the big news. I don’t think I will ever be able to part with this book as it holds such heart-warming memories. Maybe one day I’ll be reading it to my grandchildren to help them prepare when they have a new sibling on the way. 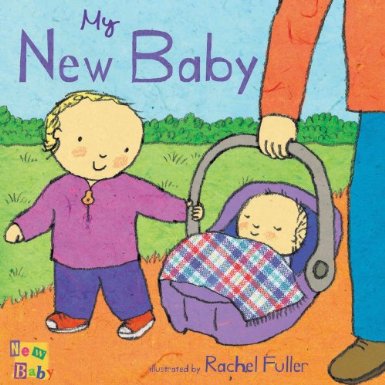 Sometimes the simplest books are the most effective, and that is one of the things I love about My New Baby. The story follows a toddler with plenty of questions about the new baby that has just arrived. Why does the baby cry? When will the baby walk? Accompanied by bright and colourful illustrations – in which both the baby and big sibling could be of either gender – the book is designed as a starting point for discussions on what life will be like when the new baby arrives. We see the baby having his or her nappy changed while the big sibling sits on the potty. The toddler eats his or her lunch while the baby has milk (always nice to see a baby being breastfed in a book). The baby is being carried in the car seat while the toddler walks. It helped Little E, and then Little Man, understand how much more grown up they were than the baby (and children do seem to love being called a big boy or girl), as well as all the things they could expect our baby to do. 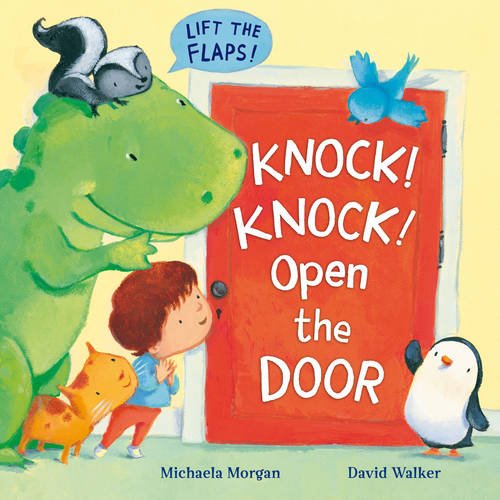 I had no idea what this book was about when I grabbed it from the shelf of my local supermarket. Little E and Little Man were obsessed with books with flaps they could open – and this one had flaps, the pictures looked bright and colourful and it was cheap so I shoved it my trolley in a rush. It’s a lovely story. Our protagonist is waiting at home for someone to call. Each time the door knocks it is an animal visitor. Despite each having a characteristic of the person we are waiting for, it is not much-anticipated guest. Finally the long-awaited caller arrives in the shape of a new baby with mummy and daddy. The language is simple and very lyrical with plenty of repetition. My little ones picked it up really quickly and they love opening the doors on each page. We enjoyed it so much I’ve bought it for friends’ children who are about to become a big brother or sister.

4. Topsy And Tim: The New Baby by Jean and Gareth Adamson 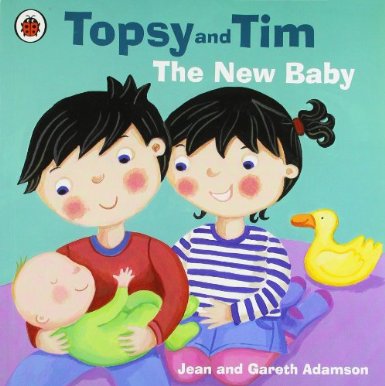 Little E had been obsessed about this book ever since a mummy friend told her about it at soft play one rainy Monday morning. Little E was asking said mummy friend whether she’d heard of Topsy and Tim – her favourite read of the moment – and listing all the T&T books she had read. Mummy friend trumped her with news of this one, saying she had three different versions of it from across the years. She told me when Little E was out of sight that her husband’s favourite is the most recent one, because the mum is way hotter than the older two editions.

Little E’s face was a picture of both admiration and jealously. A Topsy and Tim book she hadn’t read?! A book about a new baby when her favourite game is playing mummies and babies and her mummy is expecting a baby?! I could feel her desperation to get hold of it and see what she was missing out on. And so started our hunt to track it down at the library. I guess we could have reserved it, but that all looked too complicated to me and took the fun out of our little game. It was one afternoon while she was at pre-school that her brother and I found it. “Guess what Little Man found at the library?” I teased her as she came out of school. She knew in an instant. She insisted on carrying the book herself on our walk home from school, looking at the pictures as I worried about her tripping over or bumping into something due to her distraction. The minute we got home we had to read it. And again. And again. And again before bed when Daddy got home. And again the next morning.

The story itself is sweet enough. Topsy and Tim’s friend, Tony, is about to become a big brother. Tony is a bit jealous but soon comes round to the idea. T&T can’t wait to visit the new baby. We see the baby being bathed, fed (again, lovely to see the mummy breastfeeding), and having his nappy changed. It’s a great introduction to life with a new baby for any child about to become a big brother or sister featuring characters that have an air of nostalgia for their parents.

What about you? Which books helped your child prepare to become a big brother or sister? I would love to hear your recommendations. Let me know on the Cardiff Mummy Says Facebook page or tweet me on @cardiffmummy