What would you do with a few child-free hours? A lie-in? Binge-watch Netflix? Go for brunch? A spa? Tidy the house? Collapse into a heap on the sofa and not move for the day?

With the kids staying with their grandparents overnight (thank you!), Cardiff Daddy and I found ourselves with the best part of Sunday to ourselves, and none of the children’s sporting activities, birthday parties or playdates that usually fill our weekend mornings. Given dropping the kids off for the night involved more than three hours of driving we wanted something a little more exciting than simply going for food.

What did we used to do at weekends before we had children, we asked ourselves, remembering the days of lie-ins until mid-day and watching TV in bed, or going for breakfast to cure a hangover. That all seemed like such a waste of a day to us now.

“Remember when we used to go on really long walks up mountains and stuff?” I said. “Let’s do that.” 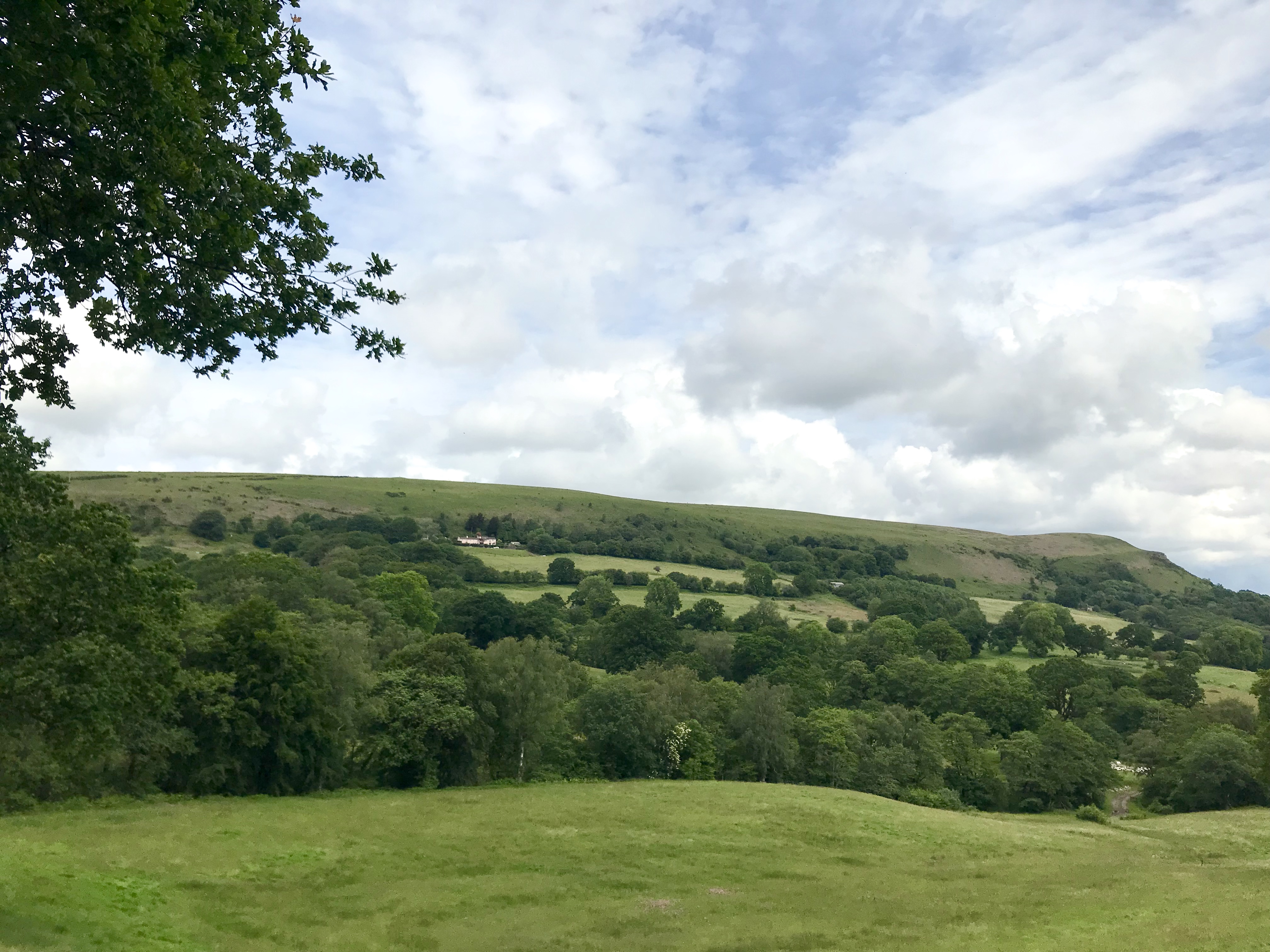 Indeed, in between the late-night partying of our pre-kid 20s we went on lots of long hikes, sometimes coastal, sometimes countryside, sometimes hills and mountains. But always such a great way to spend time together away from the distractions of modern life. There’s something about the fresh air and freedom from the city that gets the conversation flowing and helps you connect.

We’ve been on lots of long walks since having children… and although our little people are pretty good at it, including scaling Pen y Fan last year, there’s the inevitable moaning about aching feet, the cries of ‘I’m hungry’ and ‘I’m thirsty’, the having to sing the same nursery rhyme 38,786 times to distract our youngest from wanting to be carried on Daddy’s shoulders. And even though we love these kinds of family days out, it’s not like my husband and I get to have deep and meaningful conversations with each other. 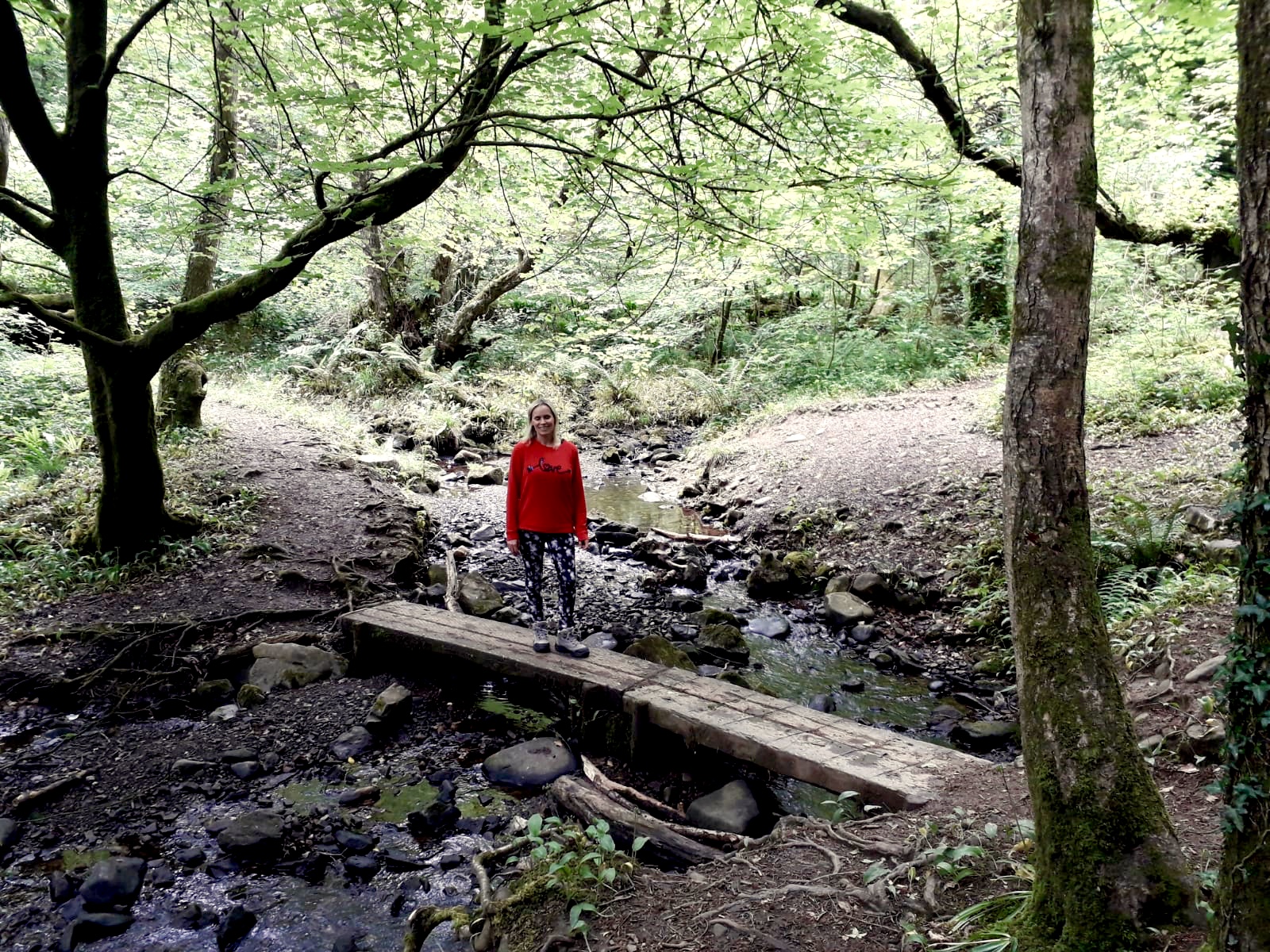 We had a window of four hours before we had to collect the kids and so needed somewhere that was quick and easy to get to, not too long a walk, and somewhere we could fit in lunch afterwards too.

We settled on The Garth – but rather than just climbing the 307m/1,007 ft elevation near Pentyrch, we included it in a 4.5 mile walk which we adapted from Weatherman Walking. This is the brilliant BBC Wales TV series starring TV weatherman and all-round local legend Derek the Weatherman, showcasing walking routes from across Wales. 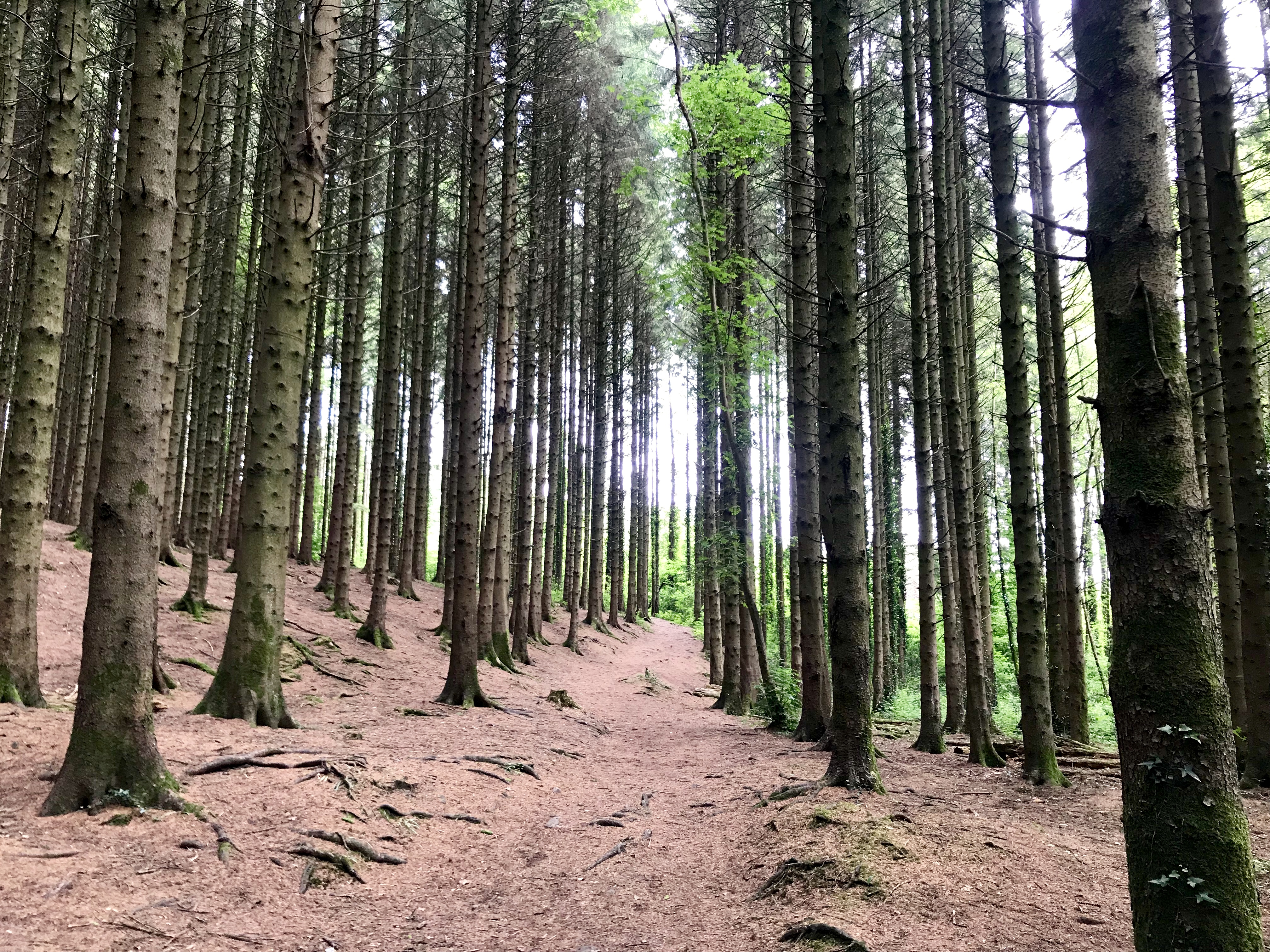 The Garth is a hill Cardiff Daddy knows well, as he used it for a lot of his practice hill climbs before his Three Peaks mountain climbing challenges, so we made a few variations to Derek’s route, which added a little distance and some different views, but Derek’s is a great route to follow.

Our walk took around two hours at quite a leisurely pace. We began and ended at The Lewis Arms pub in Pentyrch and took in the ancient woodland of the Coed y Bedw nature reserve, a striking forest of tall pine trees, and the picturesque villages of Georgetown and Gwaelod y Garth. 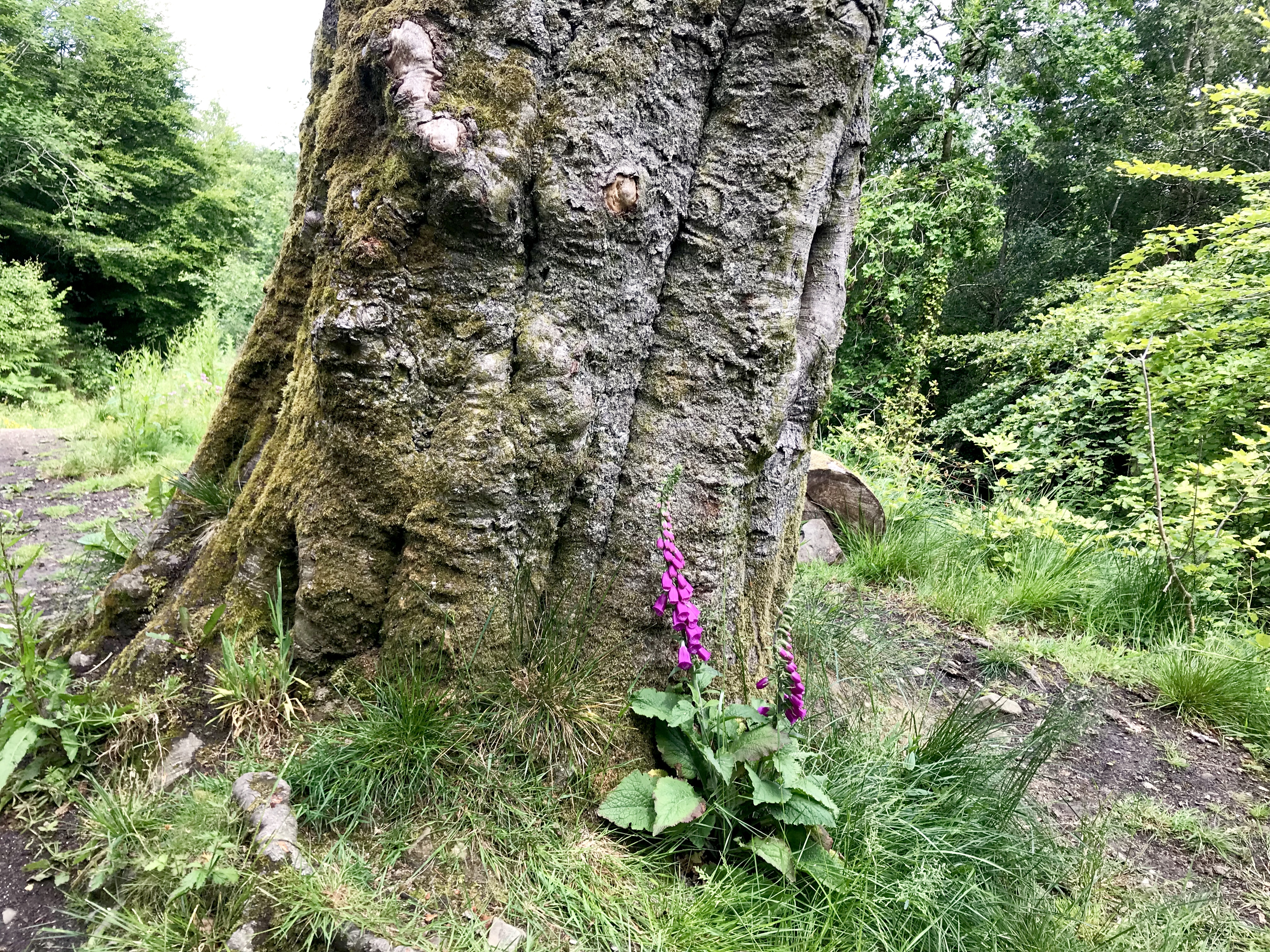 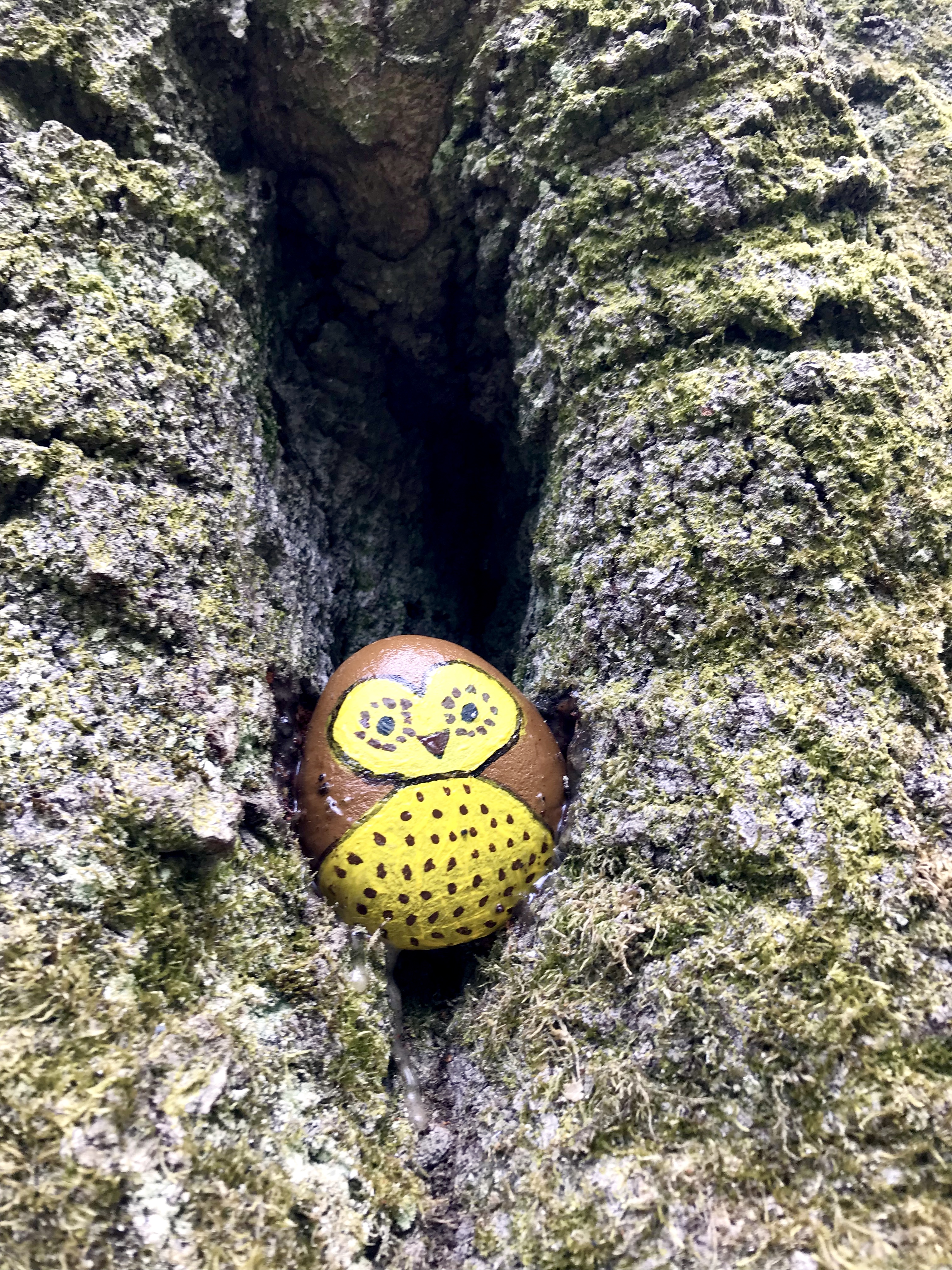 The ascent up the Garth was occasionally steep but generally manageable. There were quite a few sheep and cows as we neared the top… and I admit I panicked slightly when we saw a few bulls completed with horns. They seemed so relaxed laying in the afternoon sun and eating grass, that there was no danger, although it’s worth being aware if you have dogs or excited young children. Other routes up would have avoided this though.

We stopped a couple of times to catch a breath but more to look back at the incredible views. Luckily for us conditions were clear and bright and we could see all across Cardiff, Pentyrch and surrounding areas, to Barry and the Vale and even the Bristol Channel. It’s far from being the highest point in Wales – but from where we were standing it really did feel like the top of the world. 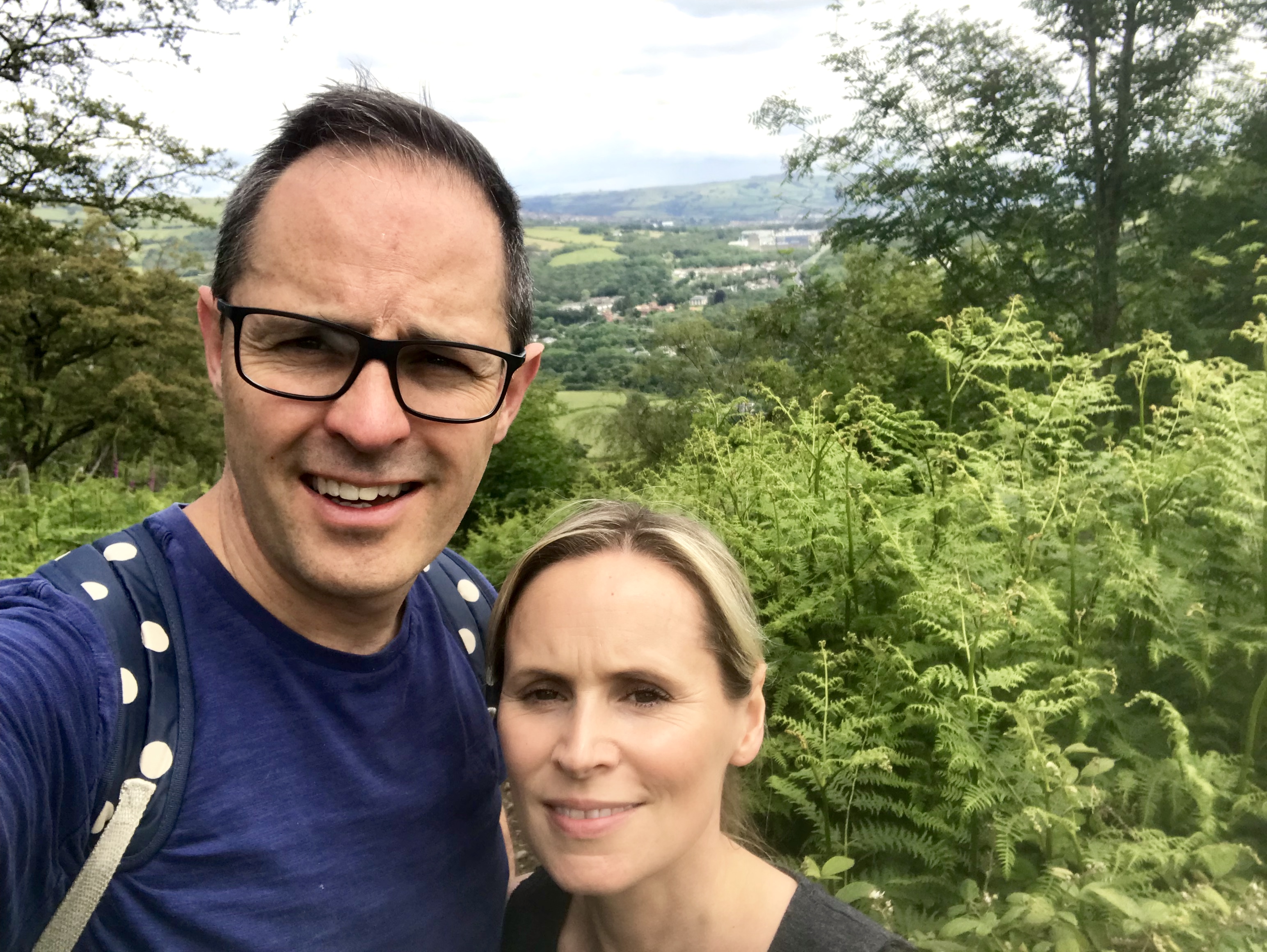 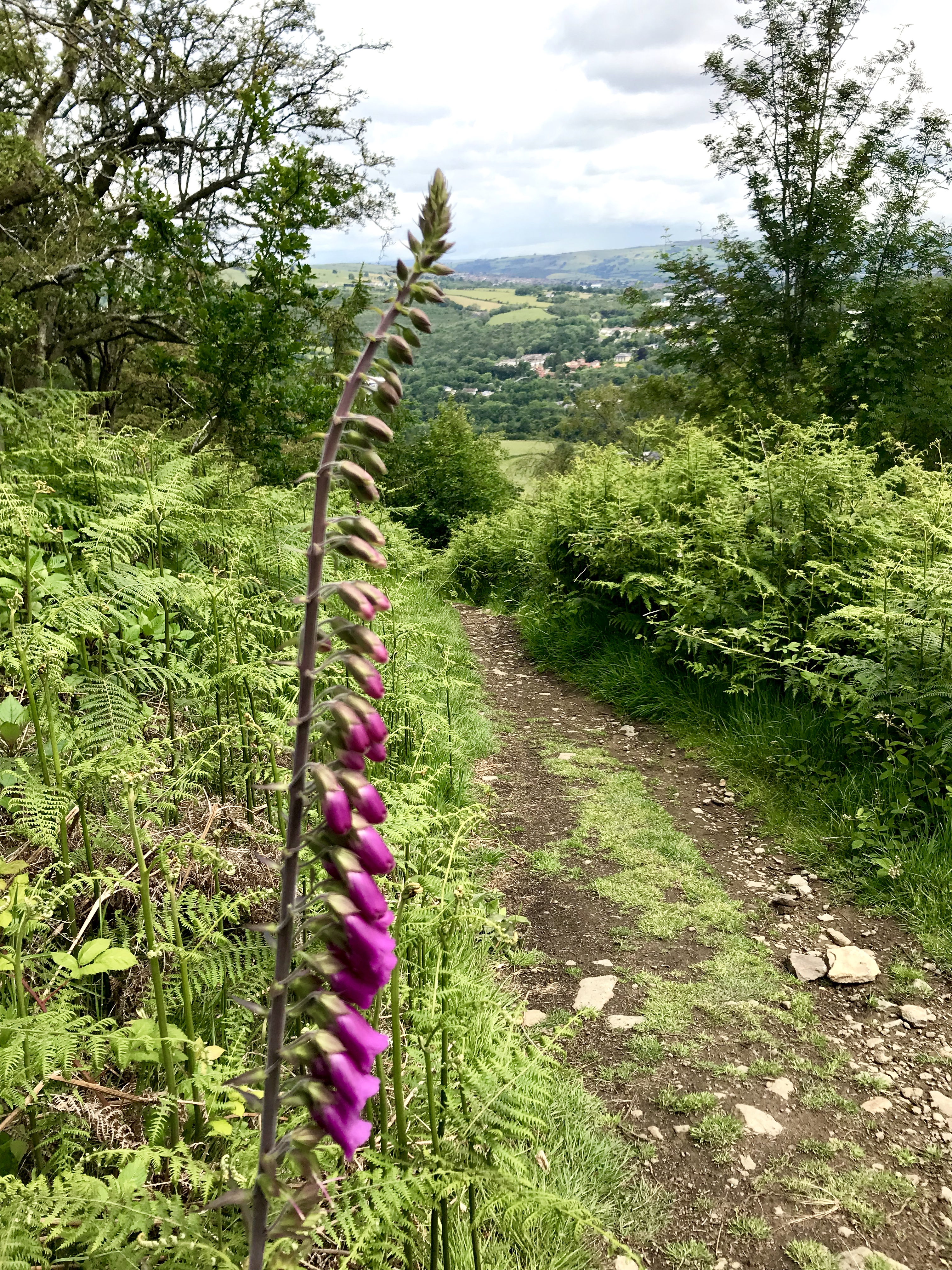 We sat for a while and read about the history of the Garth – it was the inspiration for Taff’s Well author Christopher Monger’s novel and subsequent film The Englishman Who Went Up A Hill and Came Down a Mountain, starring Hugh Grant. And the stone trig point seen in so many photos of the Garth marks one of four Bronze Age burial mounds, which date back to around 2000BC. With so much luscious greenery it’s hard to believe the area was once full of coal mines feeding the ironworks below.

We asked ourselves a few times whether we would have done the same route with children… and the answer is yes, but with plenty of sweets and chocolate to bribe them along the way! However, you could easily take a shorter option by parking at the Gwaelod y Garth Inn. 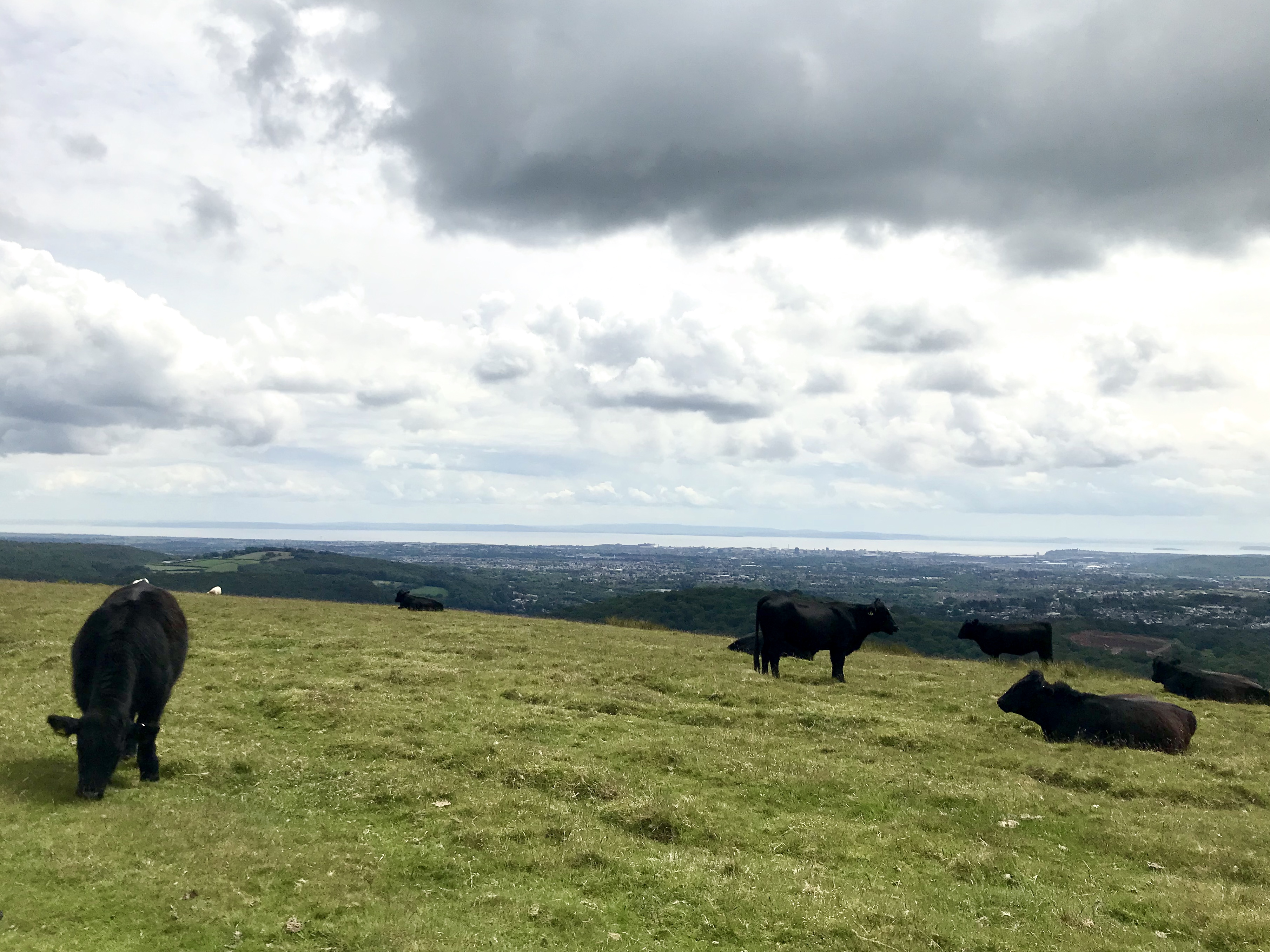 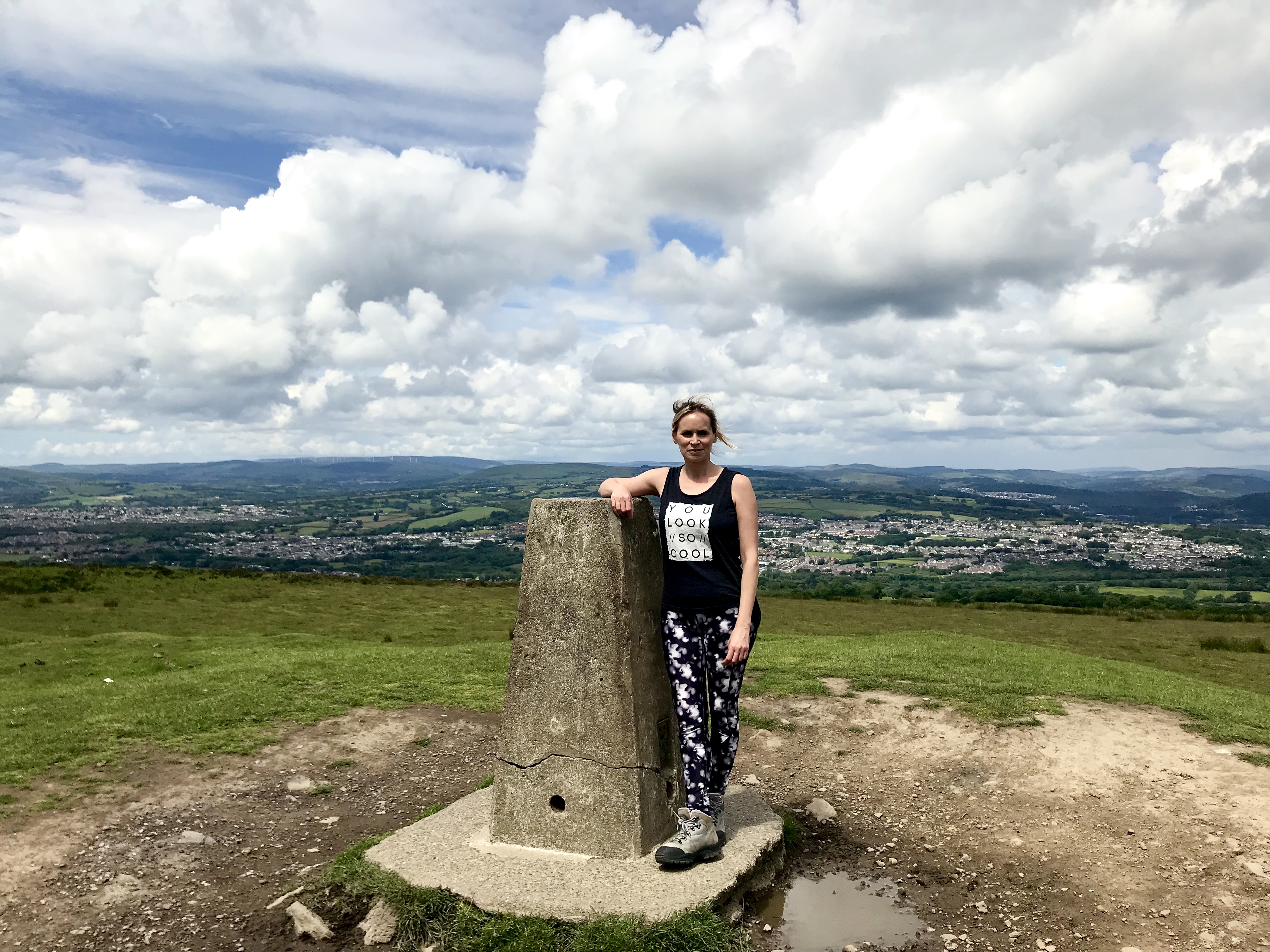 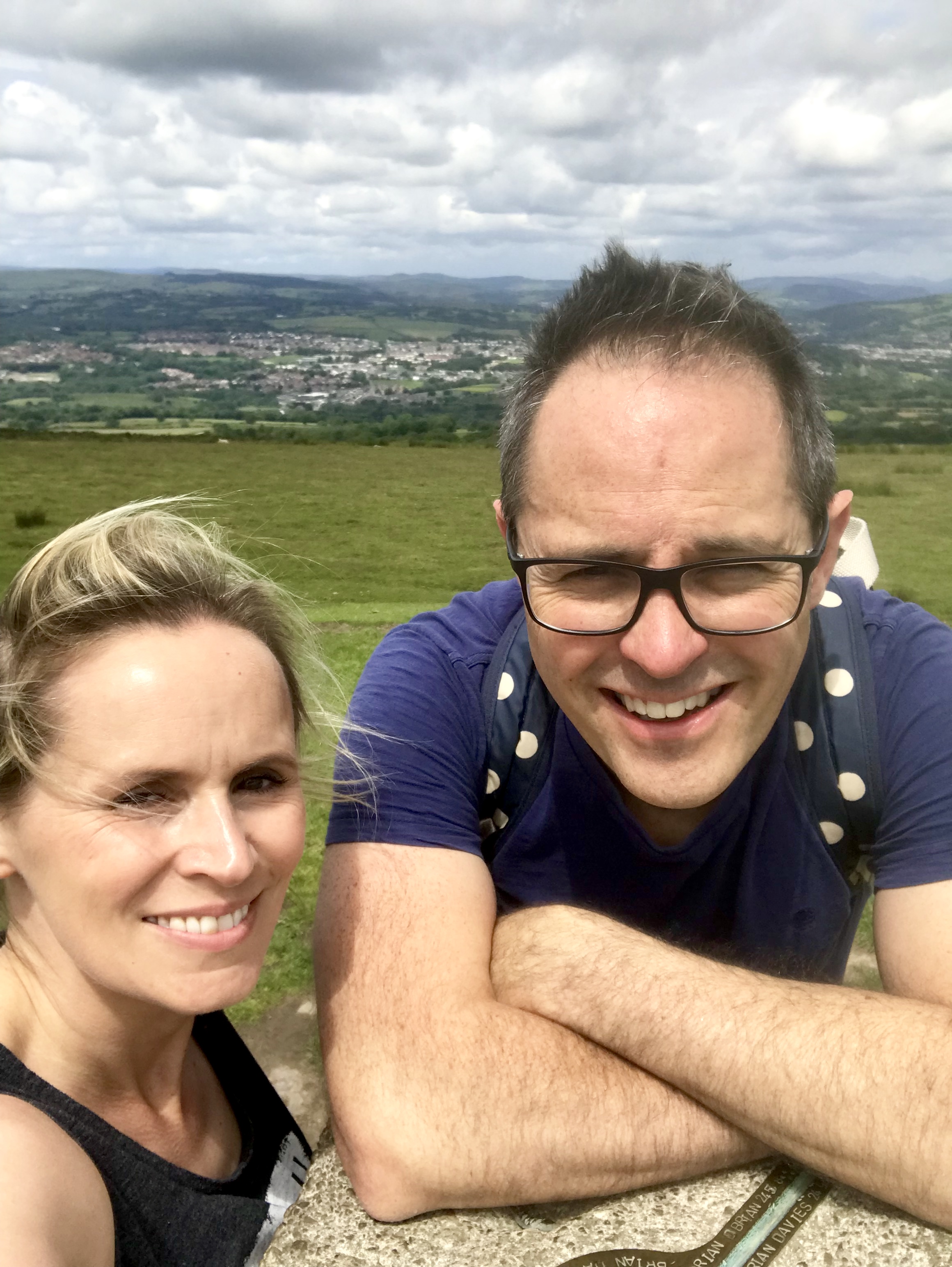 From there, we headed back down the other side of the hill, through Pentyrch, ending up again at The Lewis Arms – just as it started raining.

Having worked up quite an appetite, we treated ourselves to Sunday lunch here. I was so pleased to see a vegan roast option, while Cardiff Daddy had beef. We found the pub friendly and welcoming and the food was good. 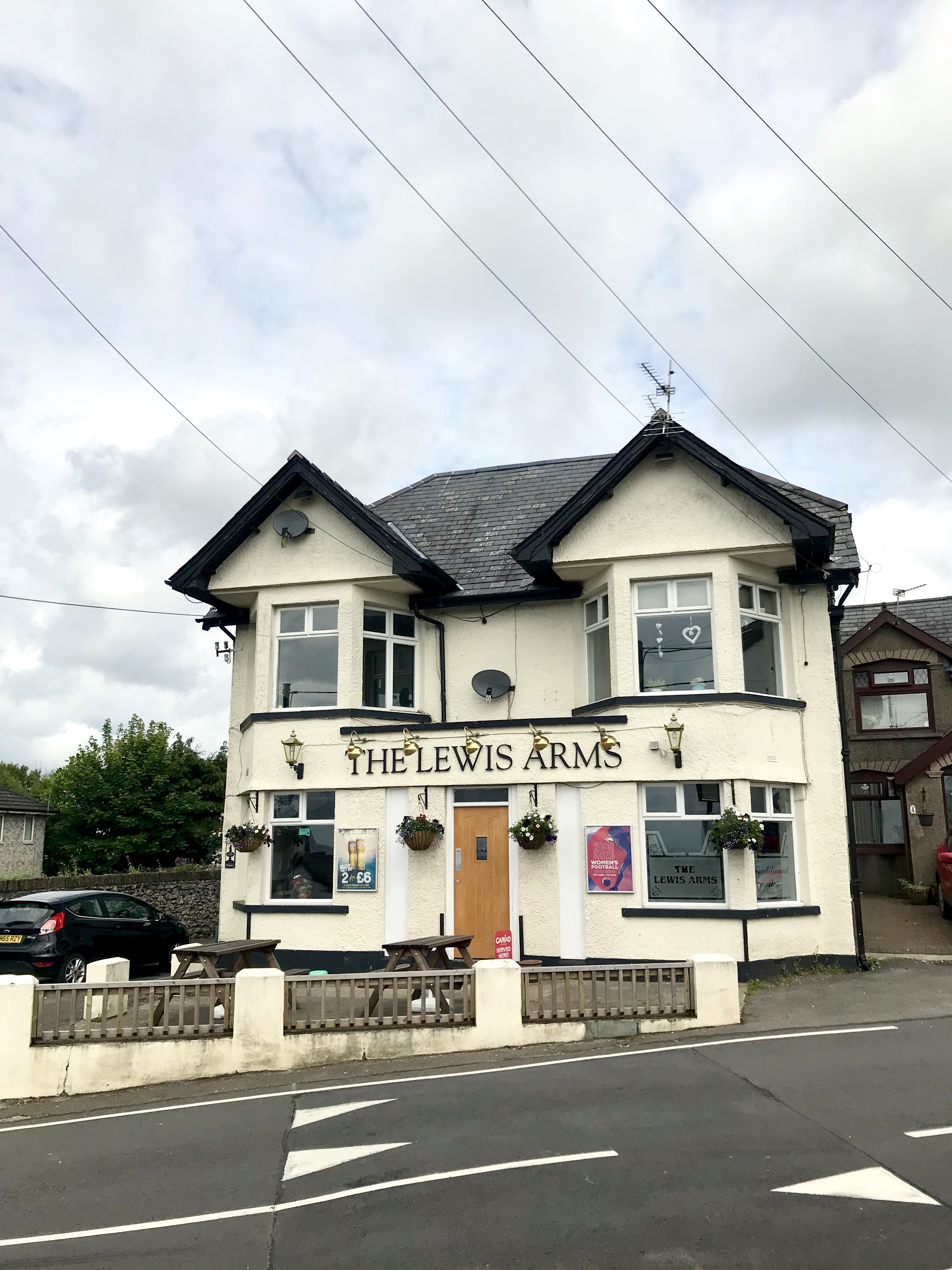 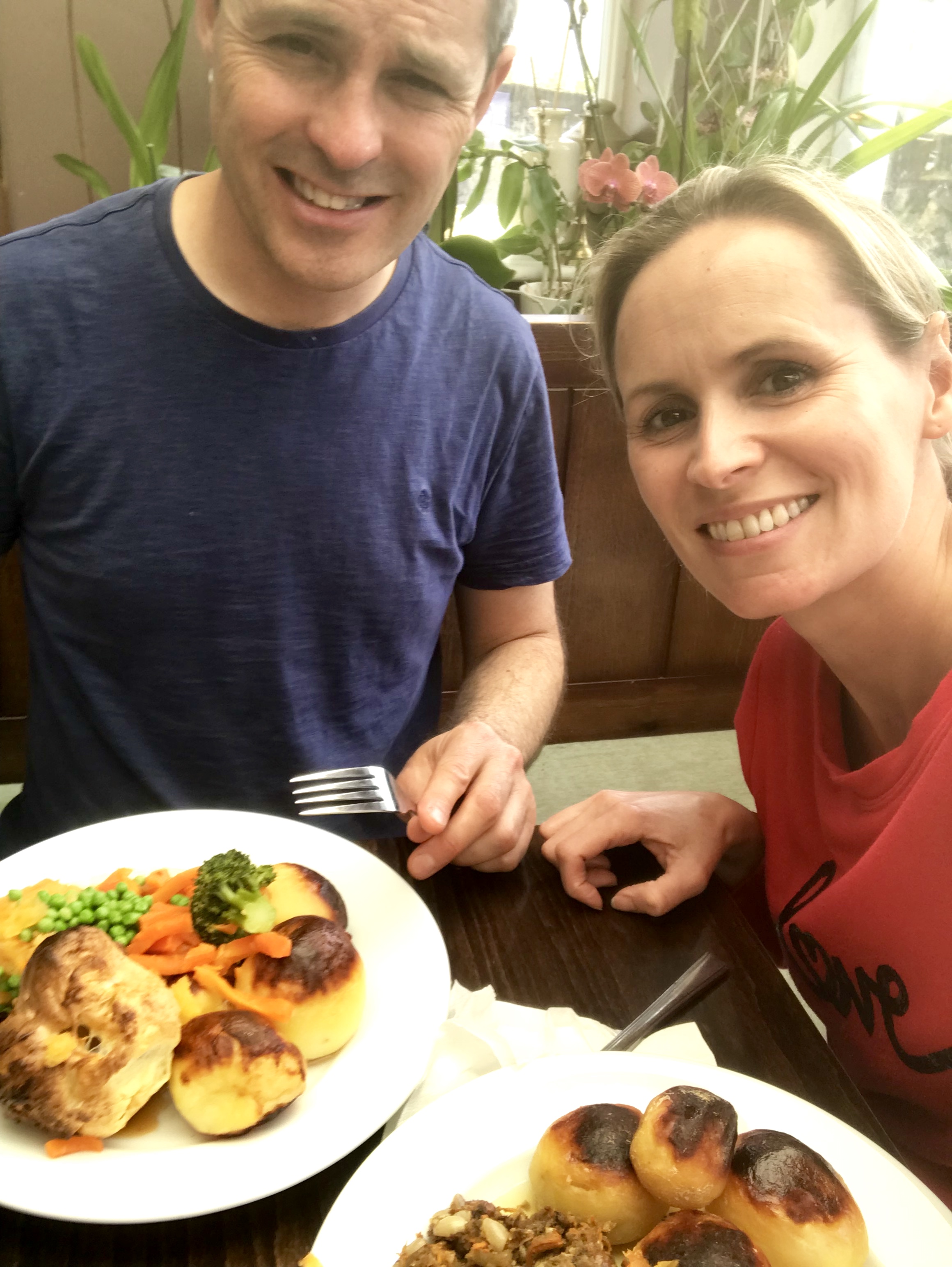 I always miss the children when they are not with us, and they were disappointed to miss out on a mountain climb after scaling Pen y Fan last year… but it was so lovely to be out in the fresh air, just the two of us. All those standard jokes about parents spending their child-free time just talking about the kids… of course our kids came into conversation but we talked about hopes and aspirations, we reminisced about our younger days, we caught up on each other’s lives and jobs in a way that’s difficult with three little people running around all the time. It was good to be “us” again for a while.

It might not be everyone’s ideal date-day, but for us it was perfect.

You can view Derek’s Weatherman Walking map here. These maps are intended as a guide to help and it is recommended you use an OS map of the area too. Routes and conditions may have changed since the guide was written, so be prepared! 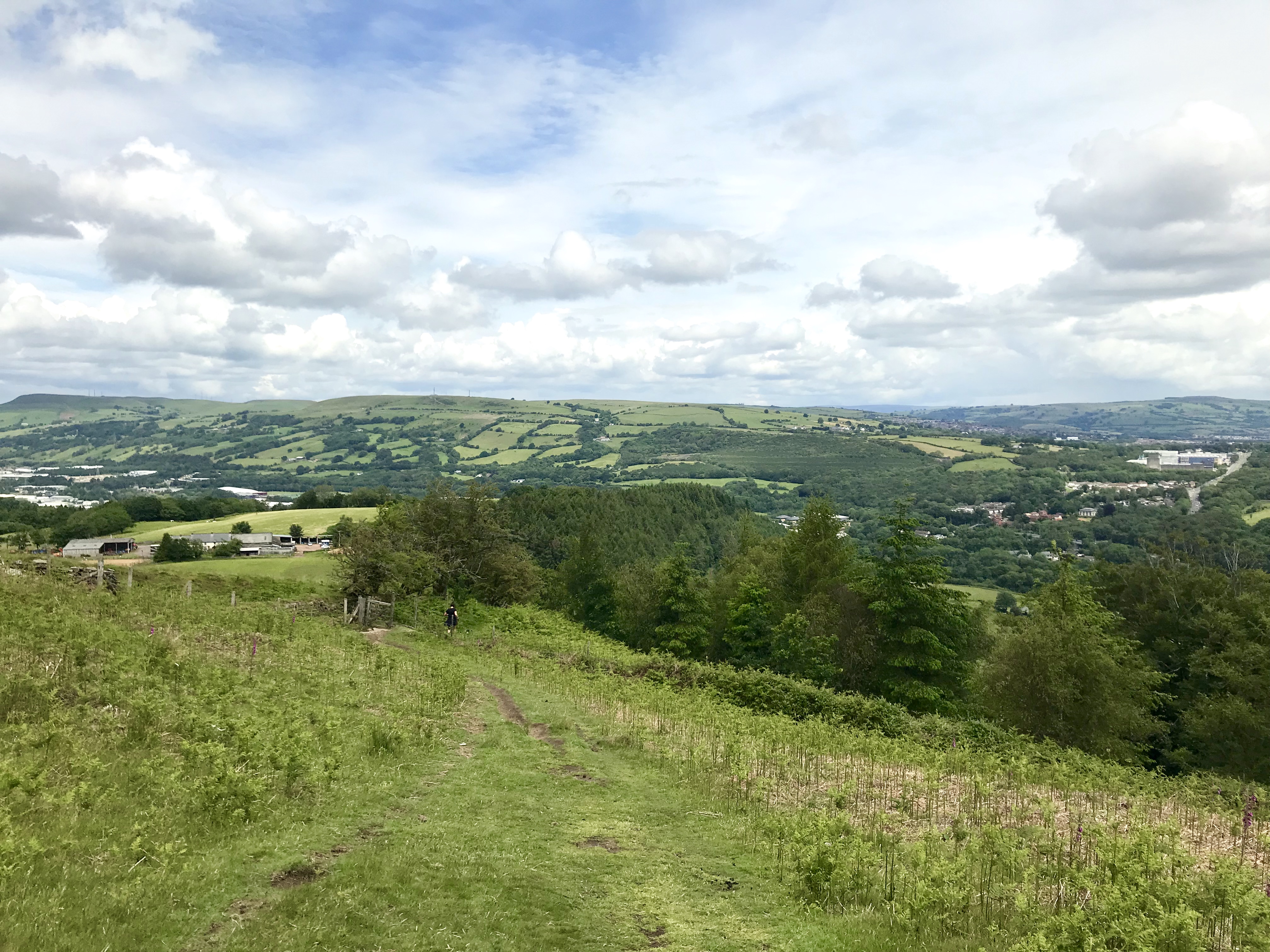 25 free family-friendly winter walks in and around Cardiff 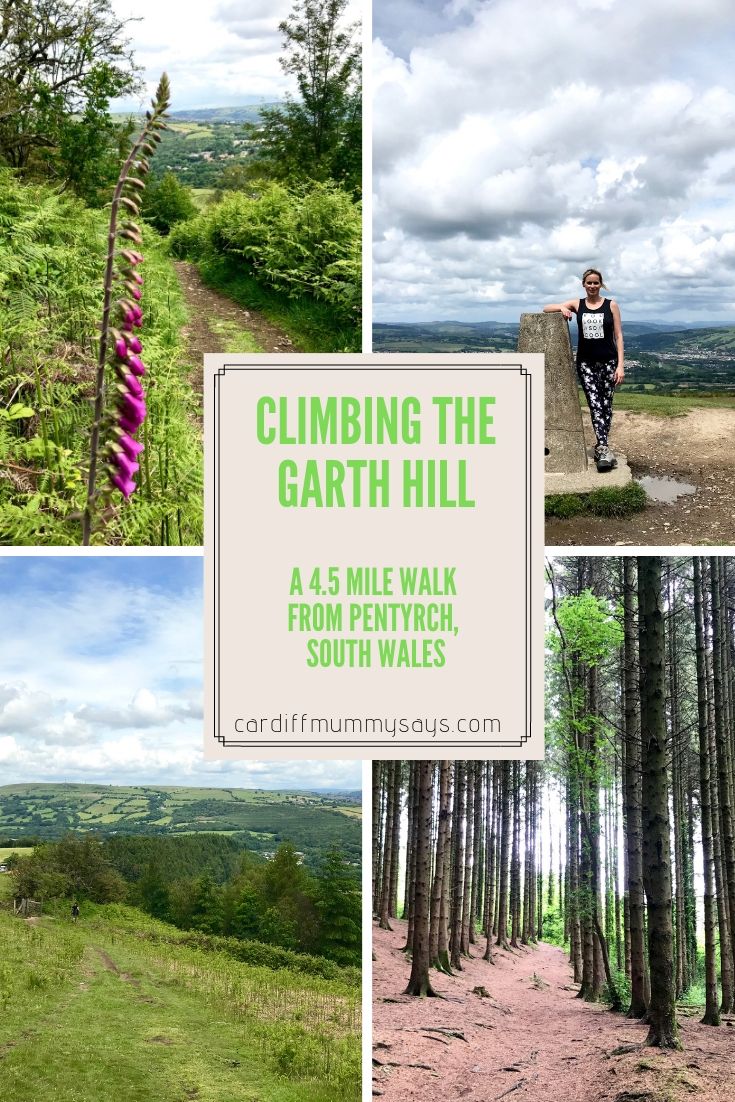 Homepage » Beyond the kids » Date-day with the husband – a 4.5 mile walk climbing The Garth