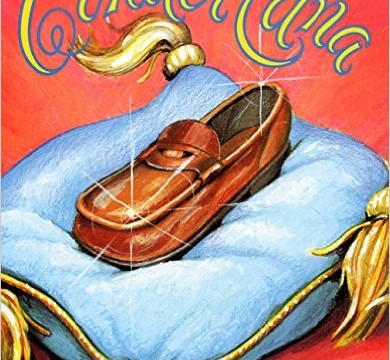 Like most little girls her age, Little Miss E, my 5¾-year-old daughter, adores fairy tales, princesses and happy ever afters. Sleeping Beauty, Cinderella, Beauty and the Beast, Snow White, Rapunzel; the Disney films, the old-fashioned Ladybird books, the dressing-up costumes – she loves it all.

I don’t have a problem with that at all; I’m quite partial to a good Disney movie myself and would love to waltz around in one of those gorgeous dresses.

But I want my children to know that life isn’t always like a fairy tale, and that you don’t need a handsome prince to rescue you to get your happy ever after.

Which is why I love Cinder Edna by Ellen Jackson. First published in 1999, Cinder Edna’s tale runs in parallel to the famous tale of Cinderella. Both are forced to work for their wicked stepmothers and stepsisters. But where Cinderella spends her evening sat among the cinders thinking about all her troubles, Cinder Edna has found herself a part-time job mowing the lawn and cleaning parrot cages for her neighbours.

Where Cinderella relies on her Fairy Godmother to magic her up a dress and a carriage, Cinder Edna has already used her wages to put a down payment on a dress for such occasions, and takes the bus to the ball. 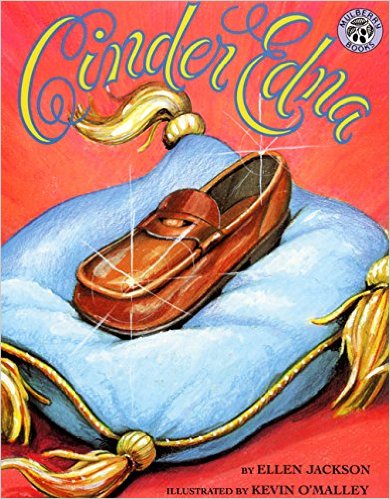 As the beautiful Cinderella and the handsome prince Randolph fall in love, the not-much-to-look-at Edna meets his younger brother Rupert and they have a great time dancing, telling jokes and talking about their love of tuna casserole. While Randolph spends his days mostly reviewing the troops and looking brave, Rupert runs the local recycling plant and a home for orphaned kittens.

Both girls leave at midnight – Cinderella before the spell breaks, and Cinder Edna to catch the last bus home, both losing a shoe in the process. When the brothers try to find the loves of their lives the next day, Rupert has a head start because he actually remembered to ask Edna her name.

Once married, Ella lives in a big palace, spends her days going to endless ceremonies, listening to countless speeches by her husband, and her evenings “with nothing to do but look at her husband’s perfect profile while he talked endlessly of troops, parade formations and uniform buttons. Edna, on the other hand, lives in a small cottage with solar heating, spends her days studying waste disposal engineering and caring for orphaned kittens, and her evenings laughing, joking and cooking with her husband.

The book is longer than usual picture books and best suited for older children with a longer attention span, perhaps aged five and above. Kevin O’Malley’s illustrations are a far cry from the bright and bold Disney-esque princesses. In fact, they’re a little dreary at times, but they are full of detail and humour, and I love that the various characters are so average looking.

It’s a bit quirky, the style might take some readers a little while to get used to, and some of the themes might need a bit of explaining. But I love the overriding messages of this book. It’s not just the prettiest girls and most handsome boys who find happiness, and rather than waiting around for someone to rescue you, you need to think for yourself and make good things happen.

Have you read Cinder Edna with your children? What did you think? Do let me know in the comments below, on the Cardiff Mummy Says Facebook page, or tweet me on @cardiffmummy

You might also like my posts on these books: Dogs Don’t Do Ballet by Anna Kemp and The Worst Witch by Jill Murphy and Winnie The Witch by Valerie Thomas.

I am a member of Amazon Associates, an affiliate scheme