If you’d told me two years ago that I would someday be sat in a restaurant laughing so hard my sides hurt with friends I had met online, I would never have believed you. I have friends in the real world, I would have told you. What do I need online ones for? I probably wouldn’t have said it out loud, but I would have thought people who made online friends were a bit weird.

But fast forward two years and here I am with an awesome group of online friends who are fast becoming friends in the real world too. And I am happy to be proved completely and utterly wrong!

They are all local mums I have met through blogging – and last night 11 of us had a fantastic night out at Five Guys at the Red Dragon Centre in Cardiff Bay. 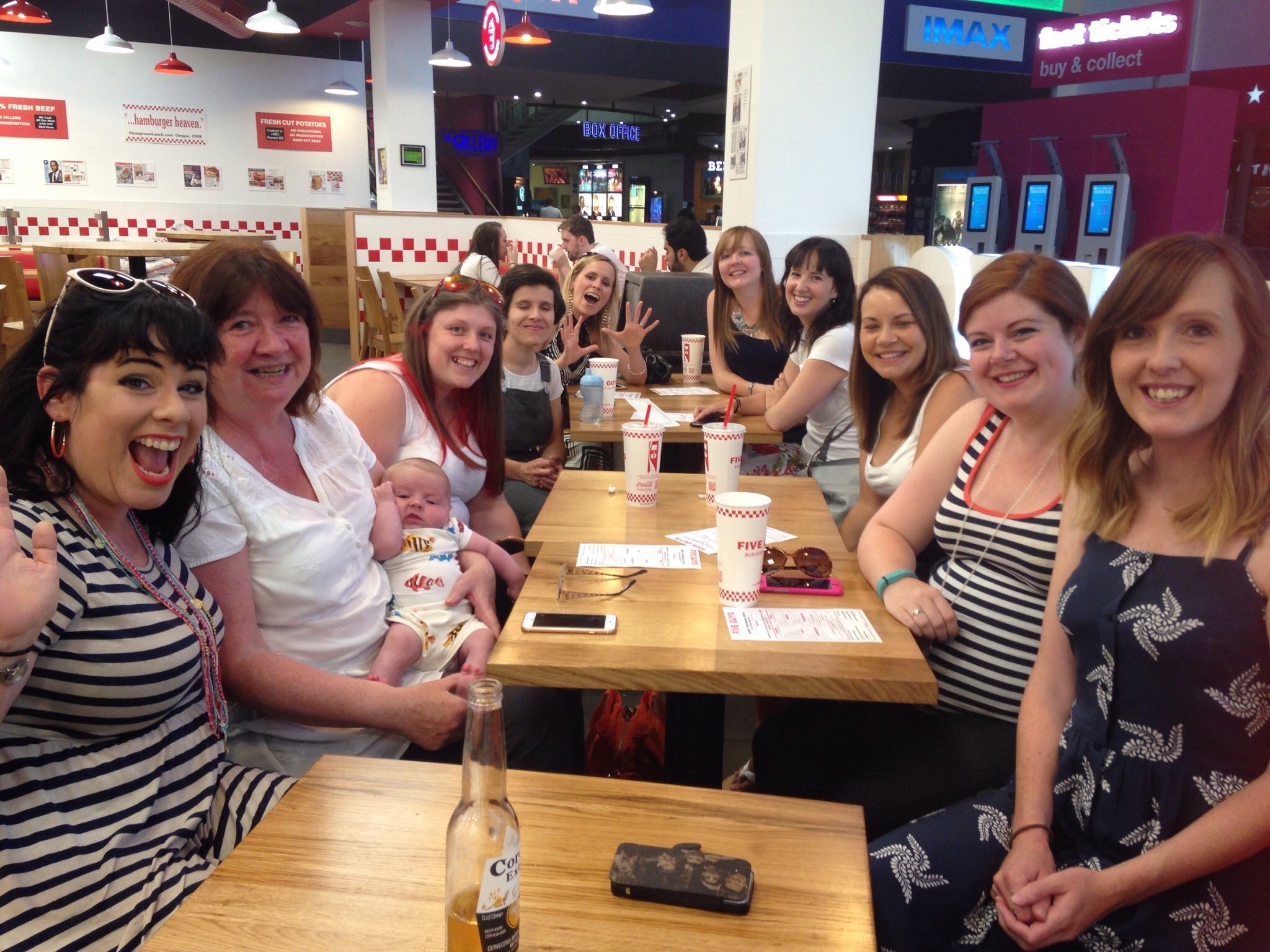 When I started Cardiff Mummy Says, it was because I hoped it would become a job that would fit in around my children. At that point, they were 4.5, almost three, and 5 months old, and the logistics and costs of having three pre-schoolers meant I needed to re-think my job as a freelance journalist and find a solution enabling me to fit in work around my children.

It’s been an amazing journey, which has allowed me to make a living, as well as spend as much time as possible with my children. And, thanks to the support from everyone who reads Cardiff Mummy Says, it has far exceeded the hopes and ambitions I had when I started out.

But one thing I had no idea of when I started was the amazing blogging community that came it. Social media has put me in contact with bloggers here in Cardiff, across Wales, the UK and internationally. I’ve found myself connecting with people I have never physically met – some I might never meet – and many of them have become friends in the real world too. I’ve gone from chatting in various blogging support groups, to meeting them in person at organised blogger events, to arranging our own meet-ups, sometimes with children, sometimes without. And the friends I’ve met online, are just as fab in the real world too.

Last night, the lovely people at Five Guys in Cardiff Bay hosted a group of 11 of us local parent bloggers, as part of my blogger ambassador role at The Red Dragon Centre.

It was a great place to meet for a group of our size, because the venue is easy for everyone to get to, you can park for free (subject to minimum spend and ticket validation) and the casual atmosphere suited us better than a more formal dining experience, especially as a couple of mums had brought their babies along with them. 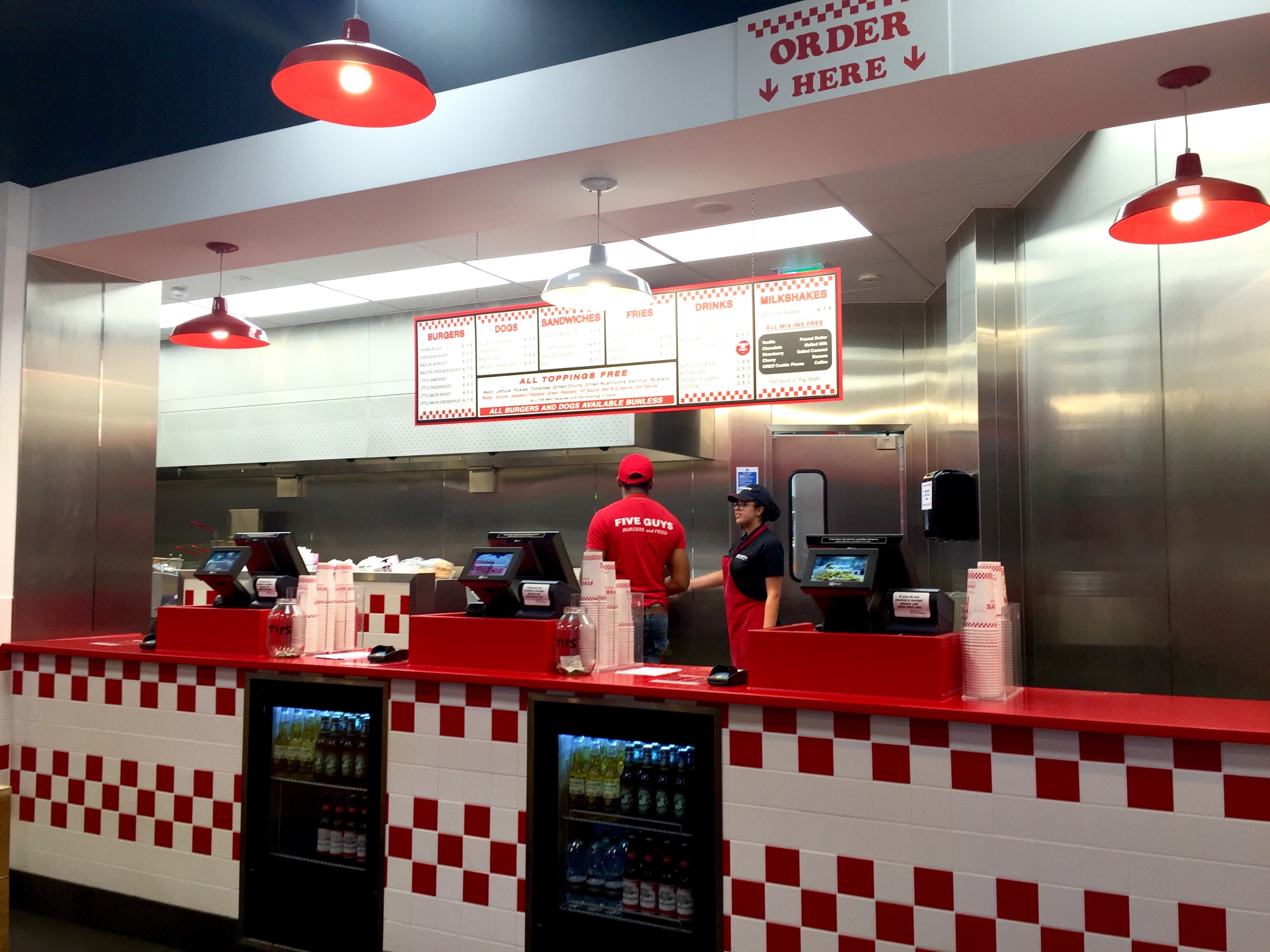 Five Guys is a family-run business founded 30 years ago in America, but has since grown to include more than 1,000 outlets worldwide. There are two branches in Cardiff – one in the Brewery Quarter in the city centre and this one, in the Red Dragon Centre, which opened in December 2015.

It’s upmarket fast food, with burgers, fries, shakes and soft drinks available to order at the tills, to dine in or take away. Everything is made in-house and cooked to order. It’s right next to the ODEON and Hollywood Bowl, and we saw lots of people coming in before or after the cinema or bowling.

We were there just for the food and the chat though, and were pleased that once we’d stopped nattering long enough to place our order, the food came out in less than 10 minutes. 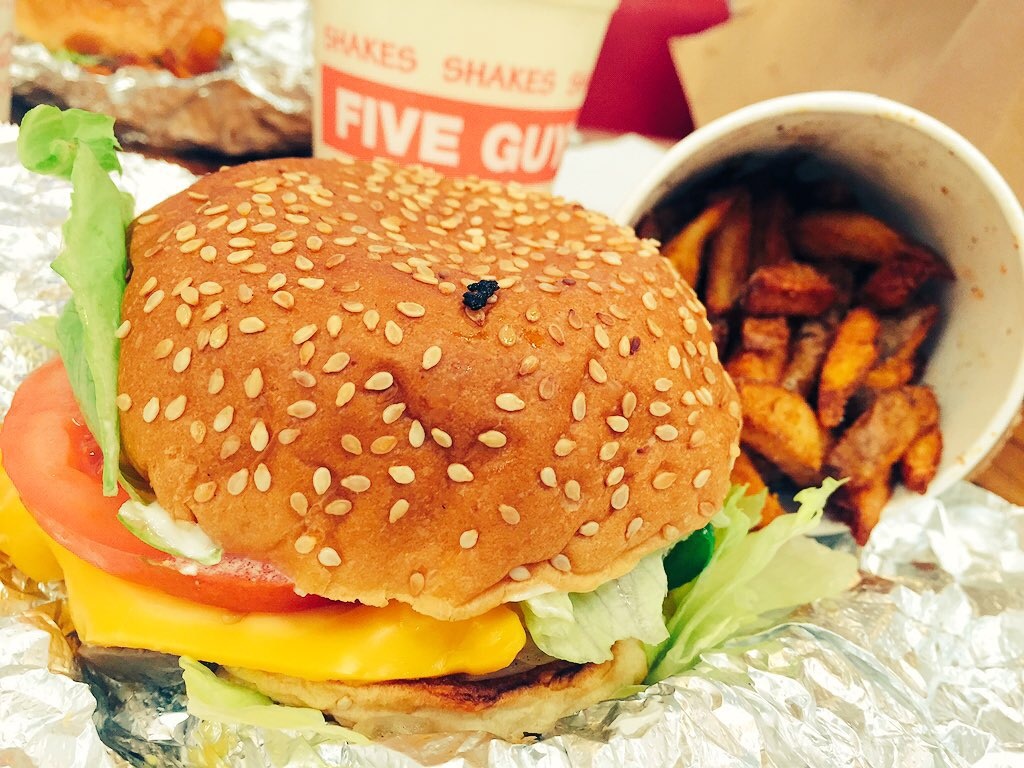 Zadiya, the restaurant supervisor, explained the menu to us. Burgers come in two sizes – regular and small (not a child’s portion but rather, referring to one pattie); there are two types of fries, salted and Cajun, and they come in three sizes, Little (£2.75), Regular (£4) and Large (£5), with the largest portion serving three to four people. Burger options included a hamburger, cheeseburger, bacon burger and bacon cheeseburger, all available in both sizes.

Jo, from First Time Valleys Mam, was pleased that by leaving out the bun, she was able to order a gluten-free meal, while a couple of the hungrier members of the group (no names mentioned!) loved that you could order as many burger toppings as you liked for no extra cost.

As you might expect in a burger joint, there wasn’t the greatest vegetarian choice, and there were four non meat-eaters dining last night. I enjoyed my cheese veggie sandwich (£4.50, a bun filled with mushrooms, tomatoes, lettuce and a choice of toppings from the menu, with or without cheese), while others said the grilled cheese sandwich was super-tasty. However, an actual veggie burger would have been a great addition to the menu. 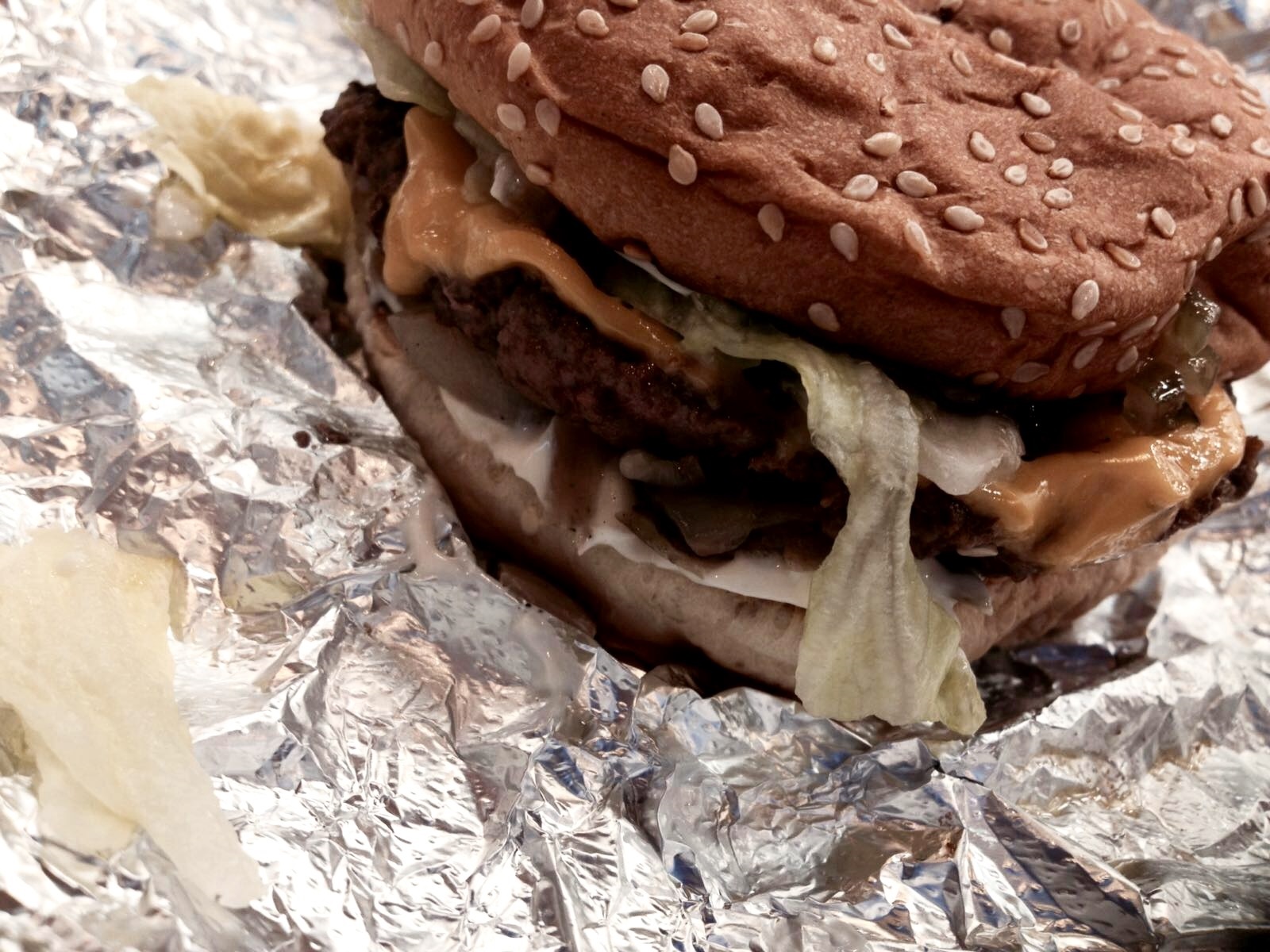 The fries were amazing! We ordered three portions of salted fries and two Cajun fries – all cooked in peanut oil – to share between the 11 of us, and devoured the lot. The bags of potatoes stacked up near the counter was testament to the fact that everything is made in house. 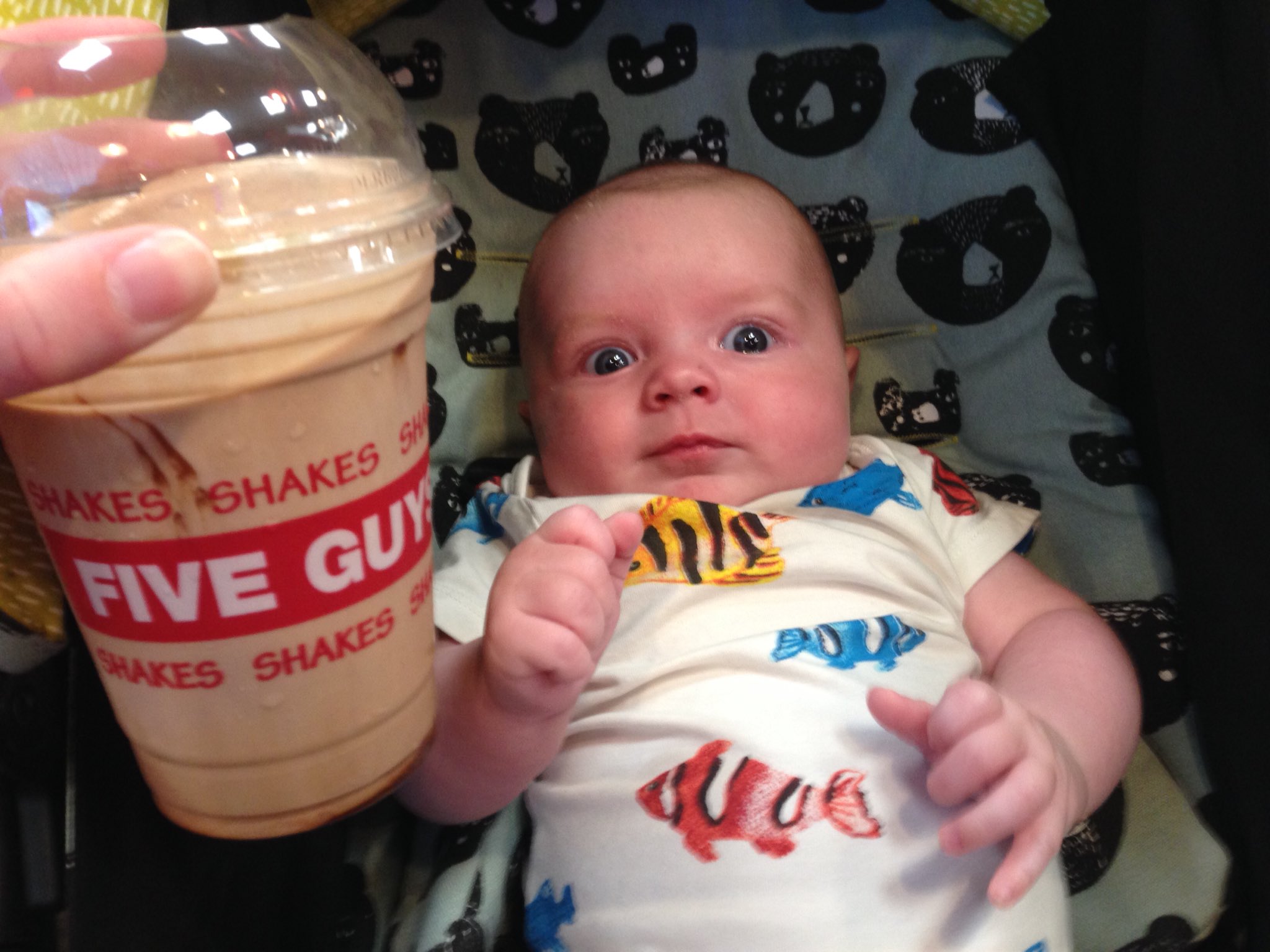 Baby Ezra came along with his mummy Alana of Baby Holiday

Most of us ordered shakes (I even broke my no sugar rule for a night because they looked so good), with salted caramel, chocolate, and peanut butter being the favourites. Sarah, from The Herniman House was the only one who took up the menu’s suggestion of adding bacon to her shake (well, she is pregnant!). As a veggie, it’s obviously not something I would consider, but she certainly enjoyed it!

The prices were typical for this kind of place, with burgers around £8 for a large and £5-£6 for a small, a single portion of fries £2.75, refillable soft drinks £2.50, and shakes £4.75.
As we were dining on a Monday night, the restaurant wasn’t too busy, so we stayed for quite a while after our food, just chatting. We did think about going to one of the pubs in the Red Dragon Centre, but never quite made it!

You can see more of our night out by using the hashtag #11mumsFiveGuys on Twitter or Instagram.

And as for the lovely bloggers I was dining with – here are all the links to their fantastic blogs. 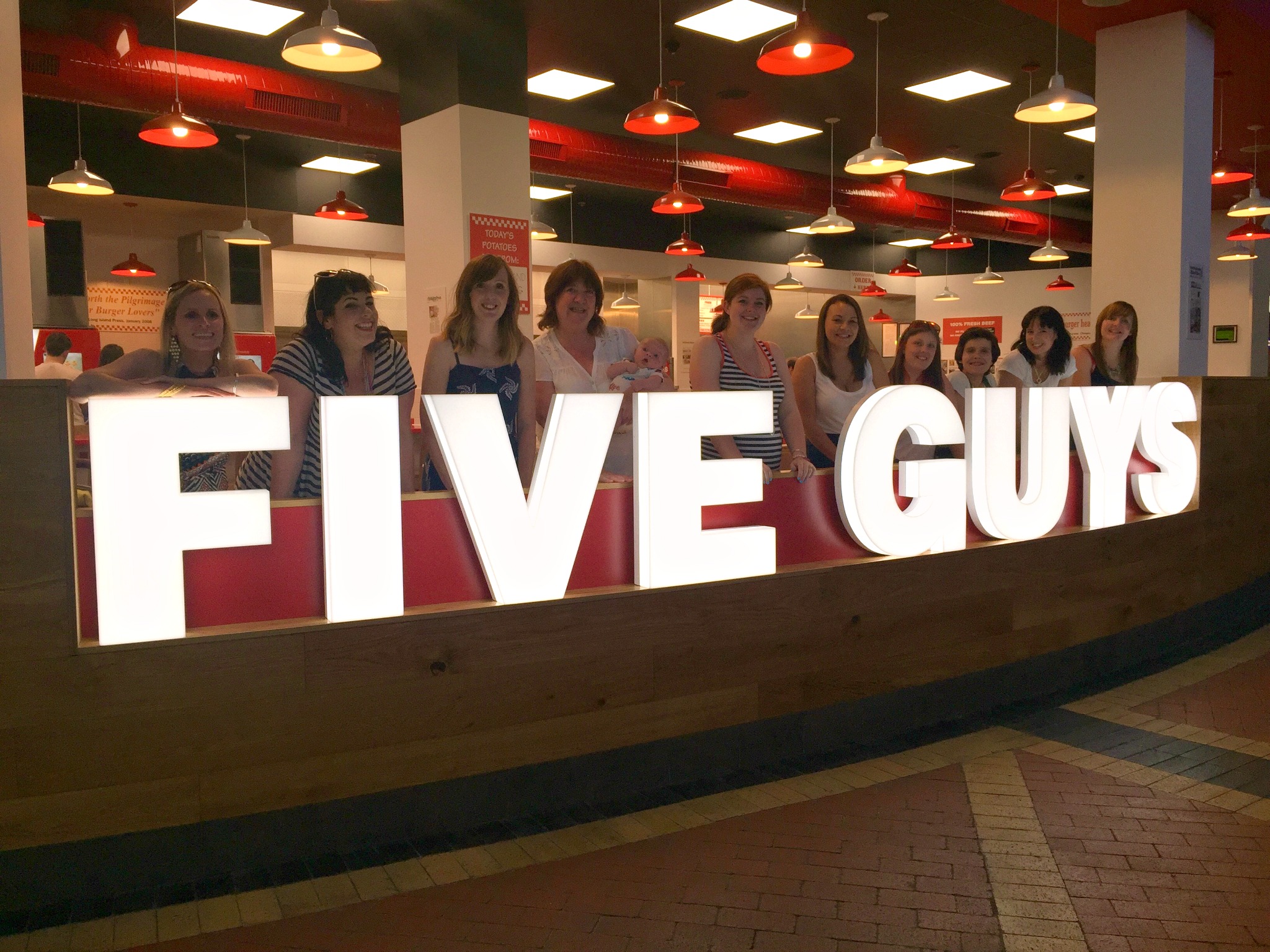 Laura of Side Street Style – a homeschooling mum of two boys with a focus on style, fashion and travel

Deborah of Family Days Tried and Tested – a blogging legend and mum or seven, full of inspiring ideas for family activities

Thanks to Five Guys Cardiff and The Red Dragon Centre for hosting us.