Our annual family National Trust membership has been amazing value, given all the day trips we’ve had to their properties over the last year or so.

I’ve already written about Tredegar House, our nearest property, as well as Llanerchaeron in Ceredigion, where we’ve been a couple of times while holidaying in Borth.

Dyffryn Gardens in the Vale of Glamorgan is our other local National Trust property, and somewhere we’ve been to a few times now, including twice in the last few weeks.

The first time was a family outing, the five of us, plus my parents. The second was just me and Toddler Boy I, the youngest of my three children, now aged two and a quarter. I’ve combined our experiences and photos from both visits in this post.

It always takes us a while to make it into the house and grounds – because my children love the wooden playground between the car park and the entrance. There’s a wooden obstacle course for older children and a climbing frame with a slide and metal tunnel for younger visitors. 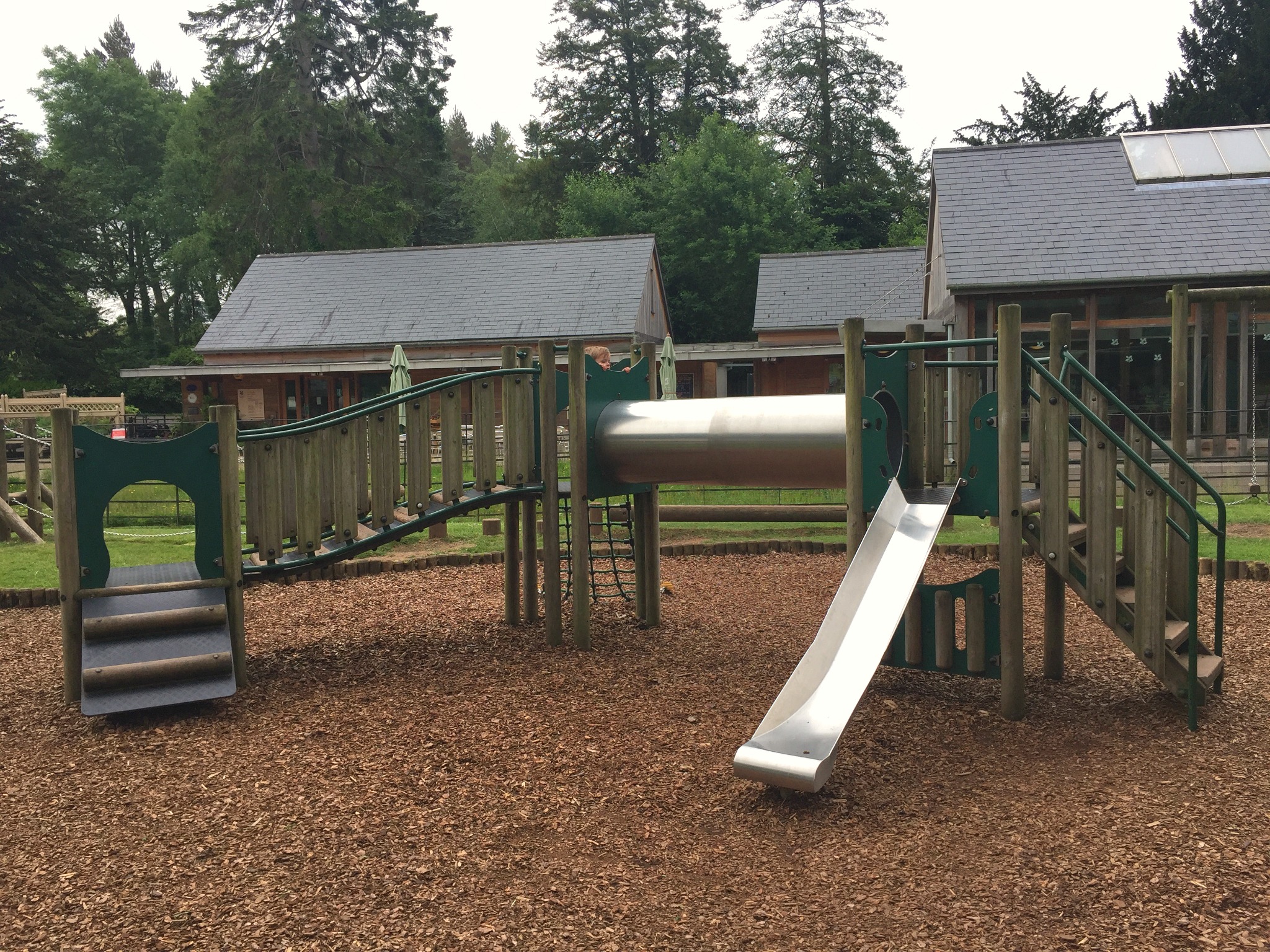 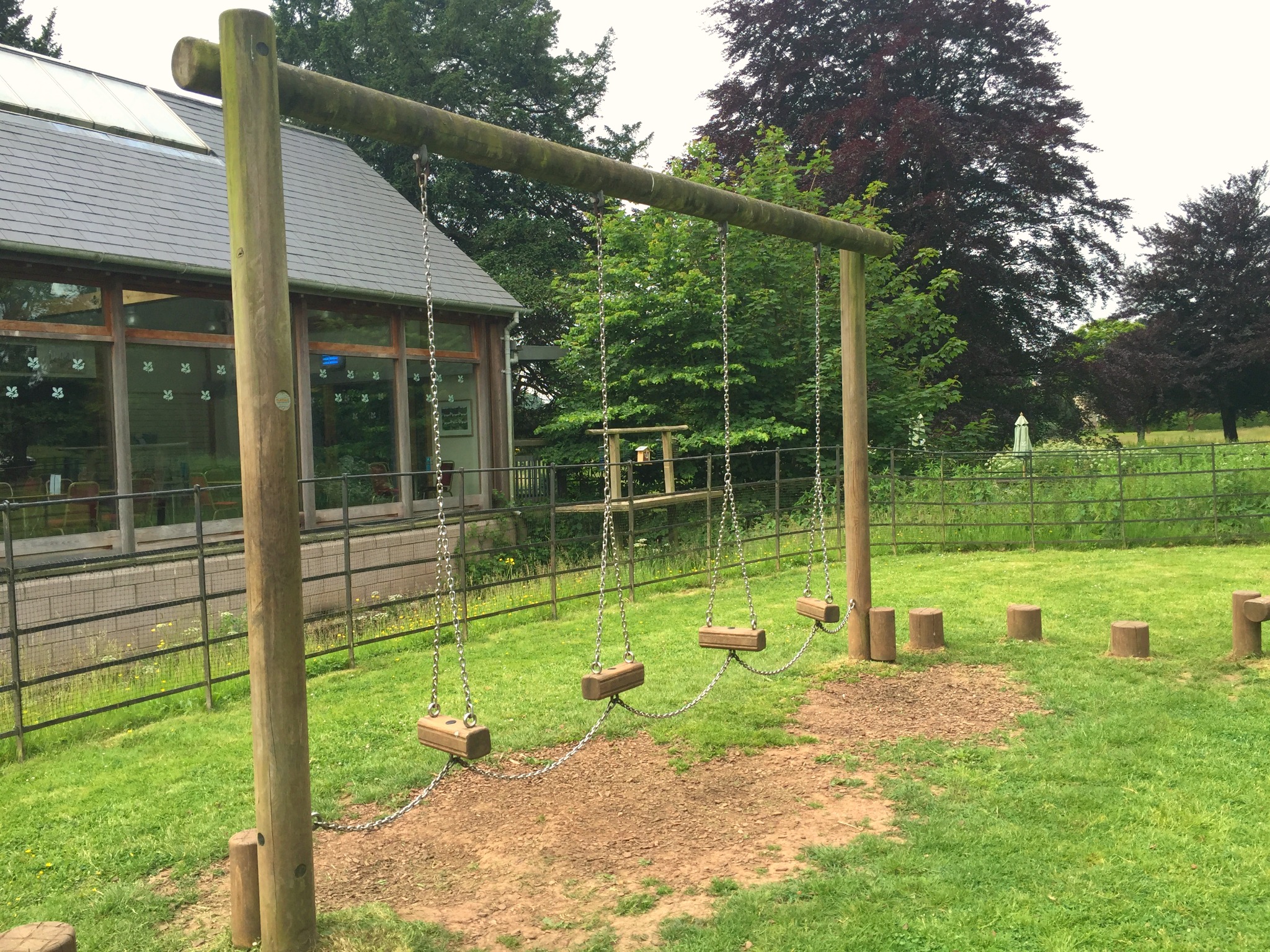 The house itself is in a state of refurbishment. The estate was bought by coal merchant John Cory, with the house finished in 1893. From the 1940s onwards, it was used as police academy, a dog training centre and an education conference facility.

After a spell being managed by the Vale of Glamorgan Council, it came into the hands of the NT in 2013, without original belongings, pieces of furniture or art. NT is slowly restoring the house to its former glory – but with a twist, because each room in the house has something to be played with or touched. The 1830s grand piano in the music room, the billiards/snooker table in the games room, the typewriters upstairs in the conference room, to name but a few. It’s such a refreshing change to not have to keep saying “don’t touch” to the children. 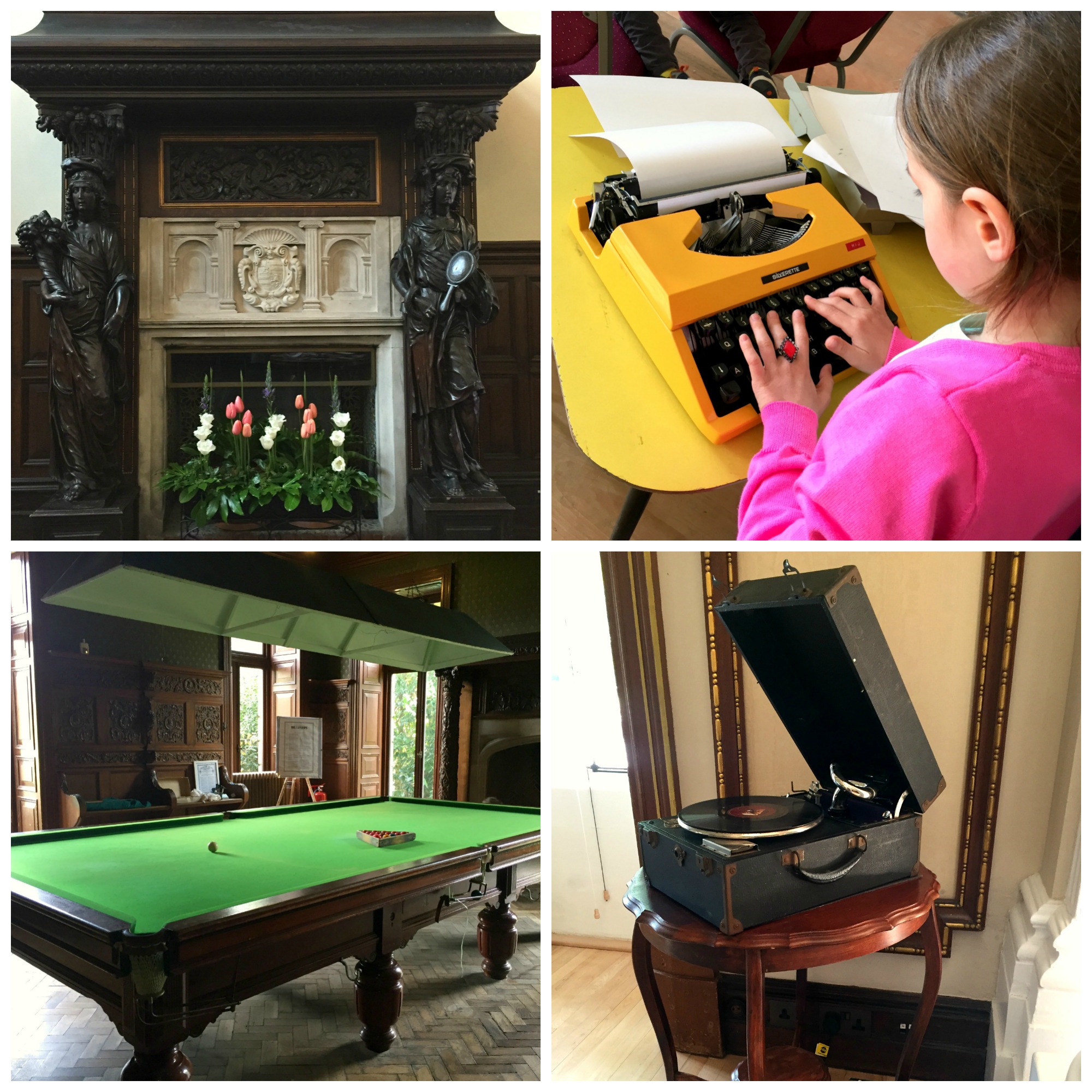 For me, however, the real beauty of Dyffryn Gardens is in the grounds themselves. As you approach the house, to the left is a beautiful area we call fairy land. Rocky paths and steps lead up a hill full of flowers and trees. 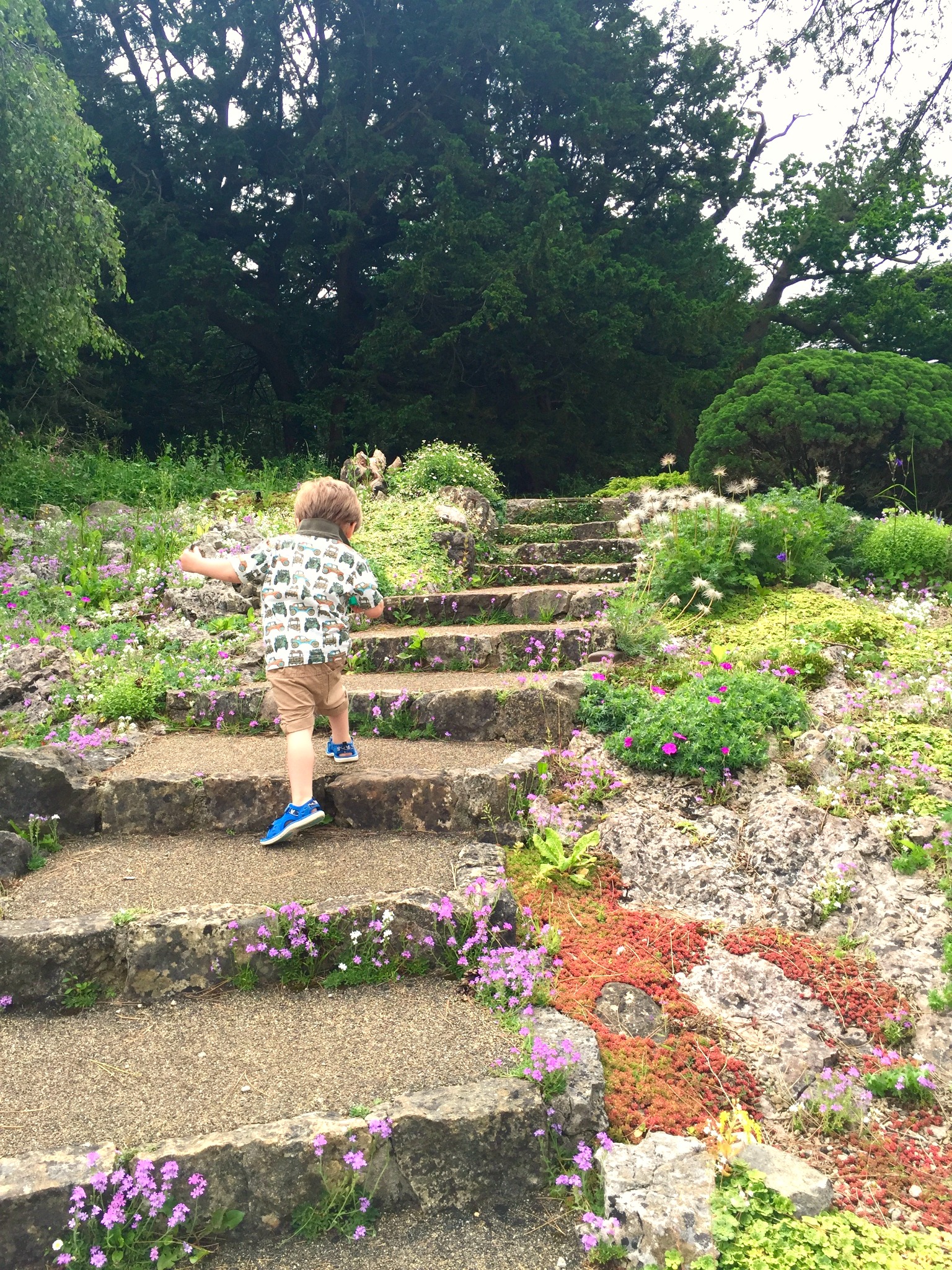 Directly behind the house is a croquet lawn. Managed by Dyffryn Croquet Club, you can have a play yourself provided there are no matches on. There’s also a cupboard full of garden games for families to enjoy.

The lake is the centre piece of the garden, home to huge carp fish and with lily pads growing in the water. The old fountain after the lakes has sadly fallen into disrepair, but there’s currently a big fundraising project to pay for its restoration. According to some of the groundsmen we spoke to there recently, about half the £80,000 needed has been raised. 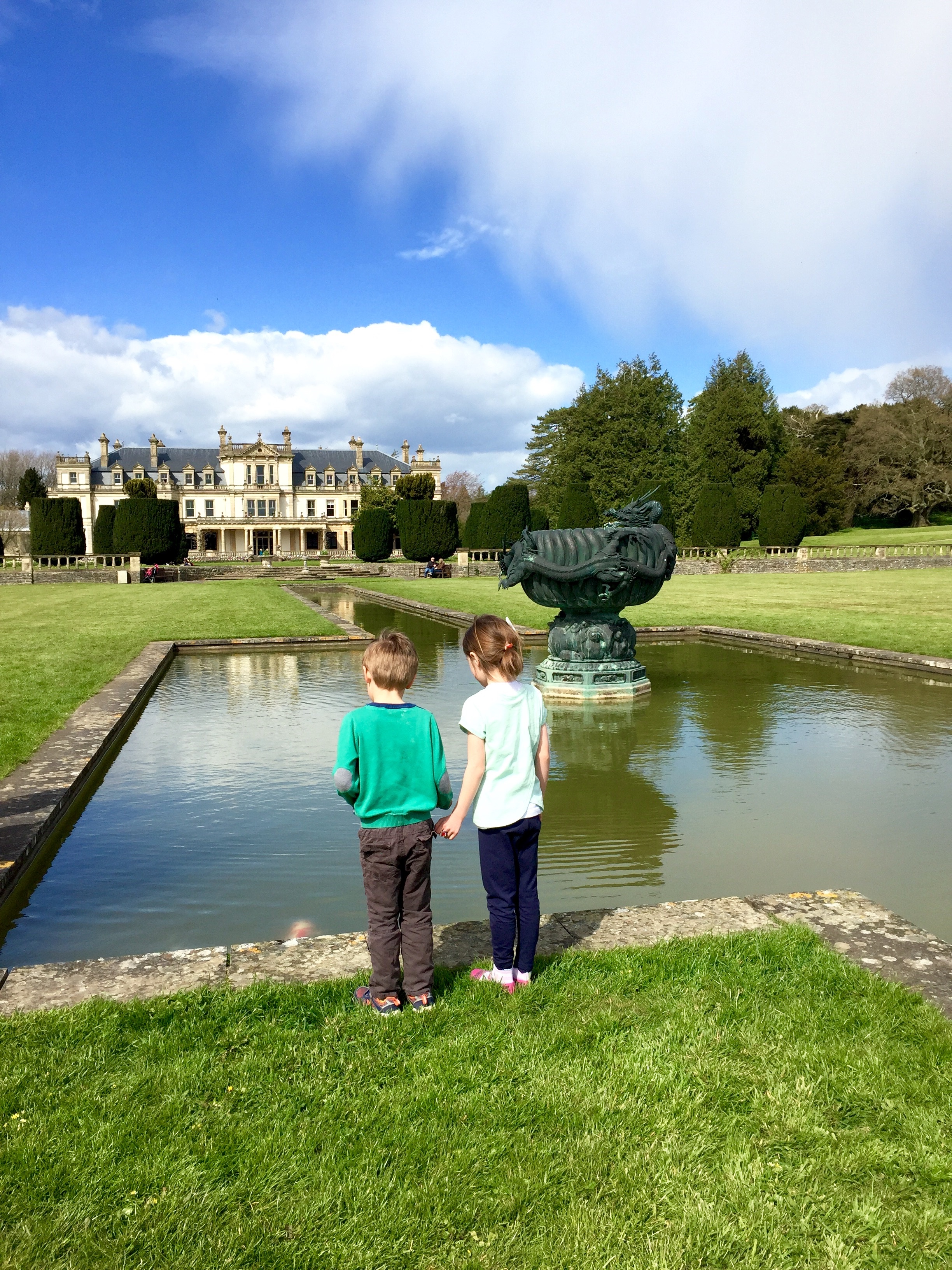 To the right of the back of house, if you’re facing the ponds, are the kitchen gardens and their beautiful herby smell, and the old potting sheds, full of ancient gardening equipment and flower pots. 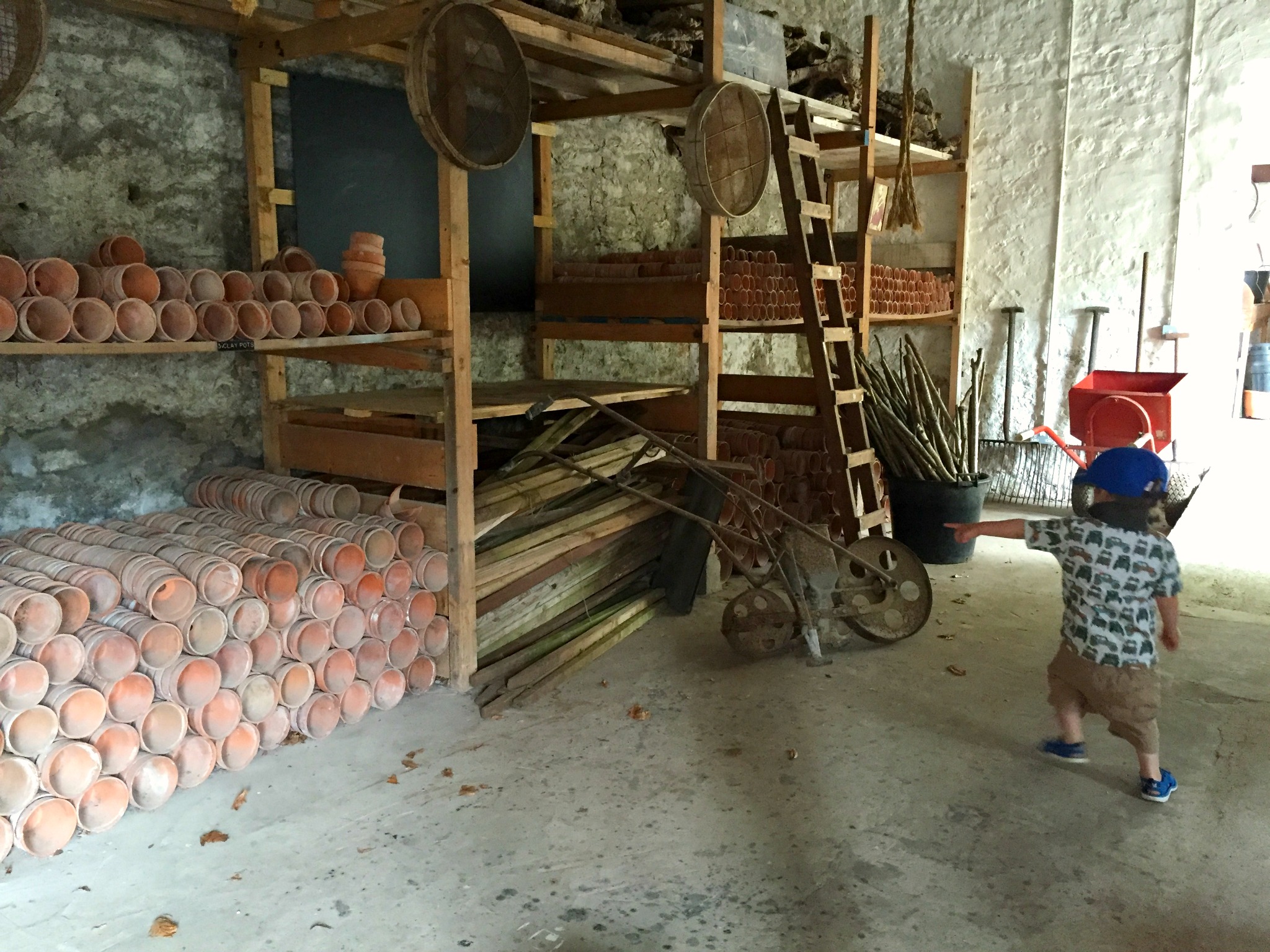 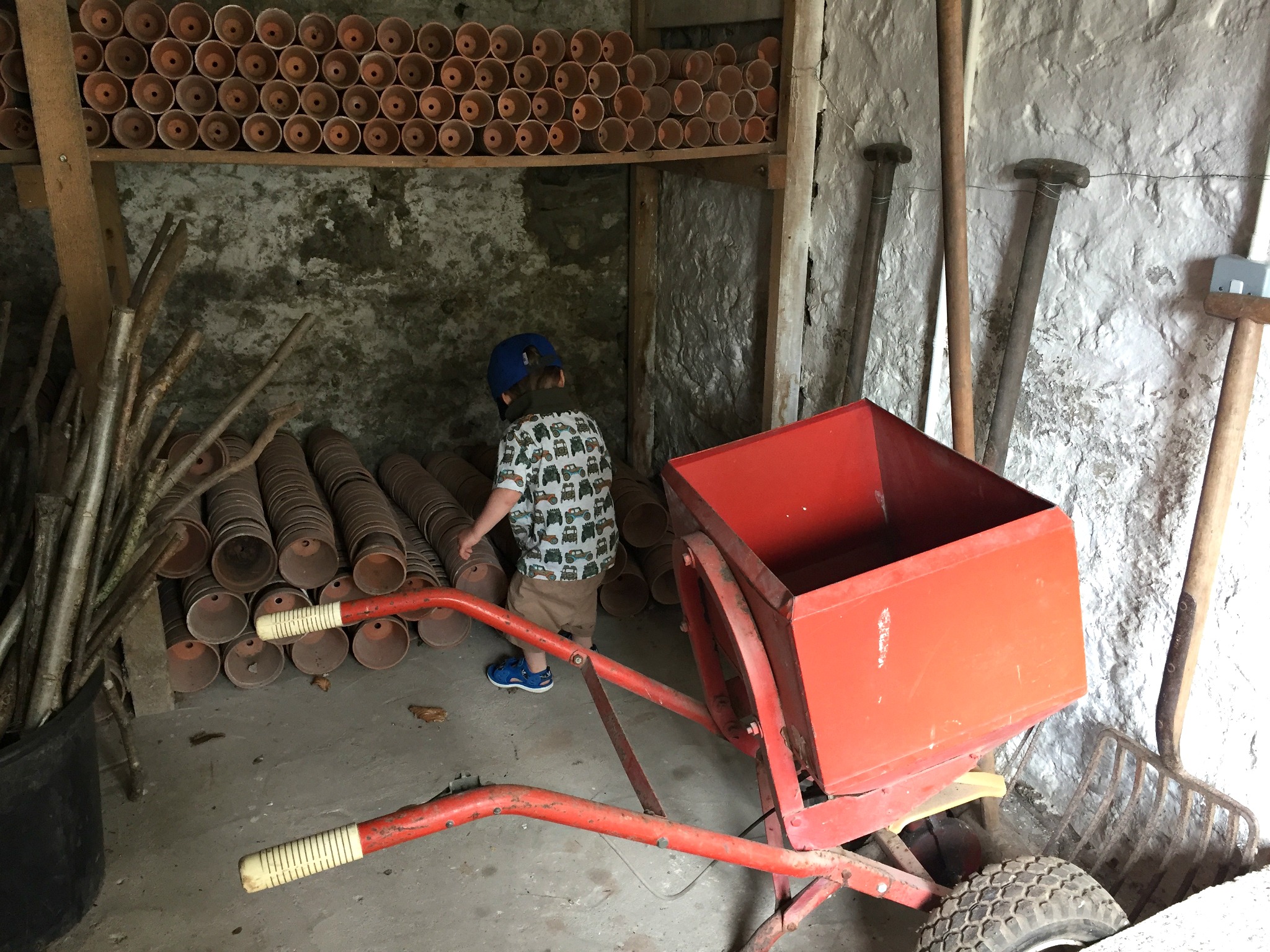 Walking down to the bottom of the pond, at the right is a beautiful walled garden area, which is my favourite area. In fact, I have photos of me as a child stood against the red brick wall. Toddler had fun looking at the water boatmen swimming in the little pond area, and climbing up and down the stone steps. 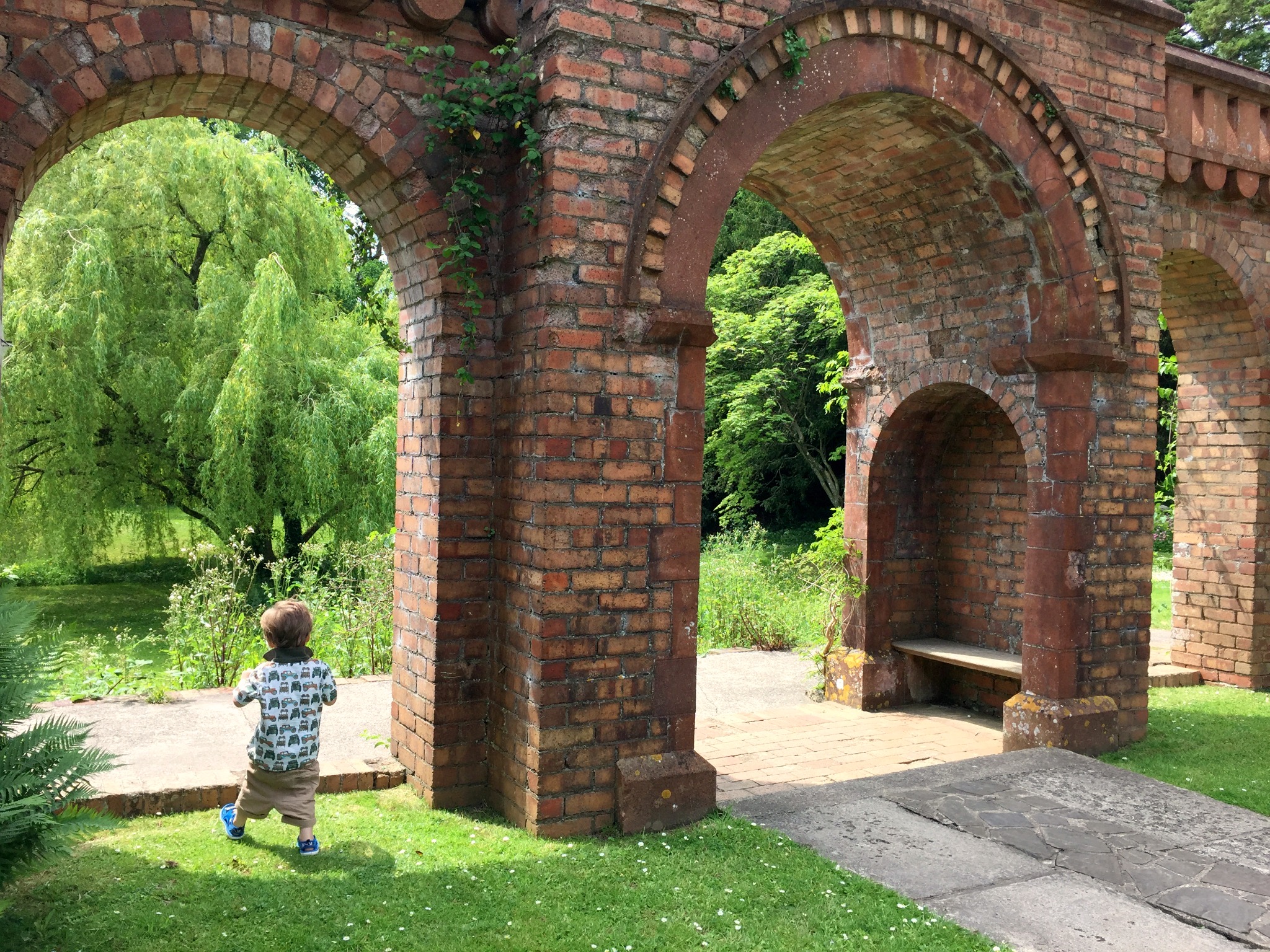 The ‘garden rooms’ which were typical of houses in this era are currently being restored, with three of them returned to their 1920s glory last summer, including the Pompeian Garden. 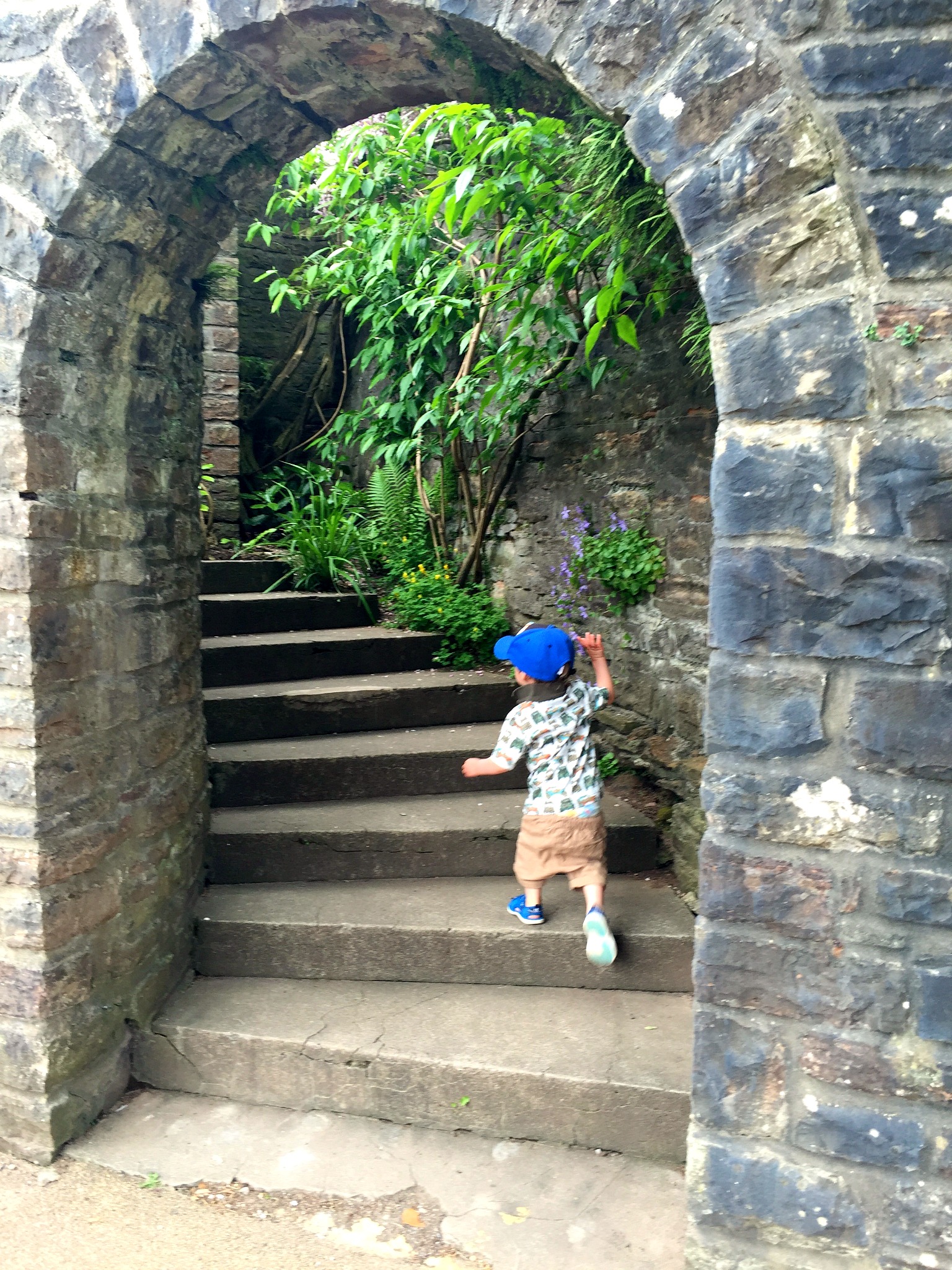 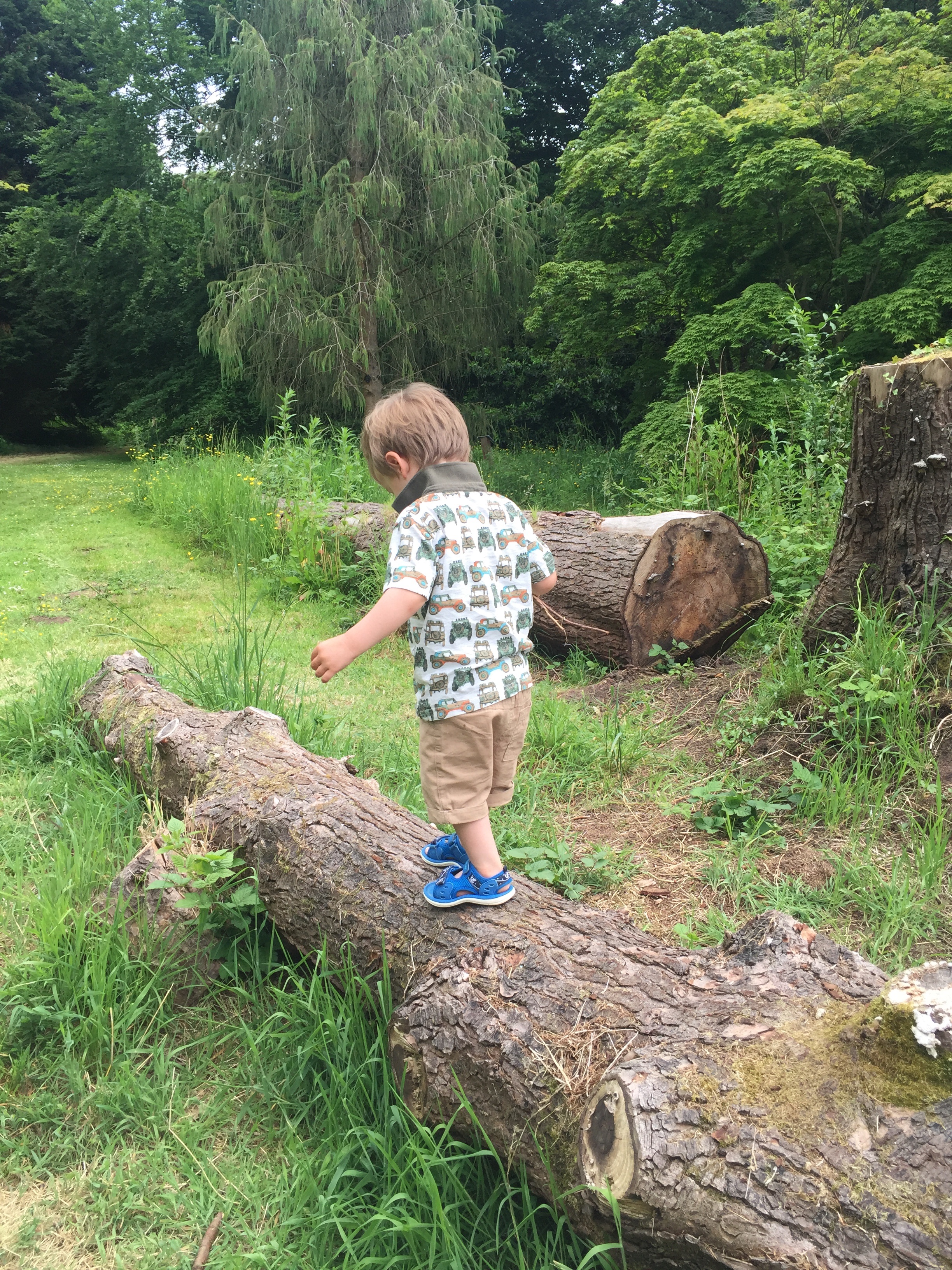 There’s also an impressive arboretum to explore, commissioned by Reginald Cory (son of  John)and designed by Thomas Mawson, a renowned garden designer, in 1906. Everything was grown from seeds, collected from all over the world. It’s currently being developed to return it to its former glory, with plans to thin, selectively fell, prune and propagate over the next couple of years. In the meantime, there are a few fallen trees which Toddler had great fun climbing on, not to mention collecting sticks, which seems to be his favourite pastime at the moment.

We always take a picnic, but there’s a cafe at the front entrance (plus a gift shop and toilets) and a smaller snack kiosk behind the house.

If you’re planning to visit this month (June 2016) look out for the second hand book festival on Saturday 11th and Sunday 12th June. As well as lots of books to buy (there’s a permanent second hand book store in the house too), there will be family-friendly storytelling and crafts to enjoy too. And on Sunday 19th June, Father’s Day, there’s a tractor display day. 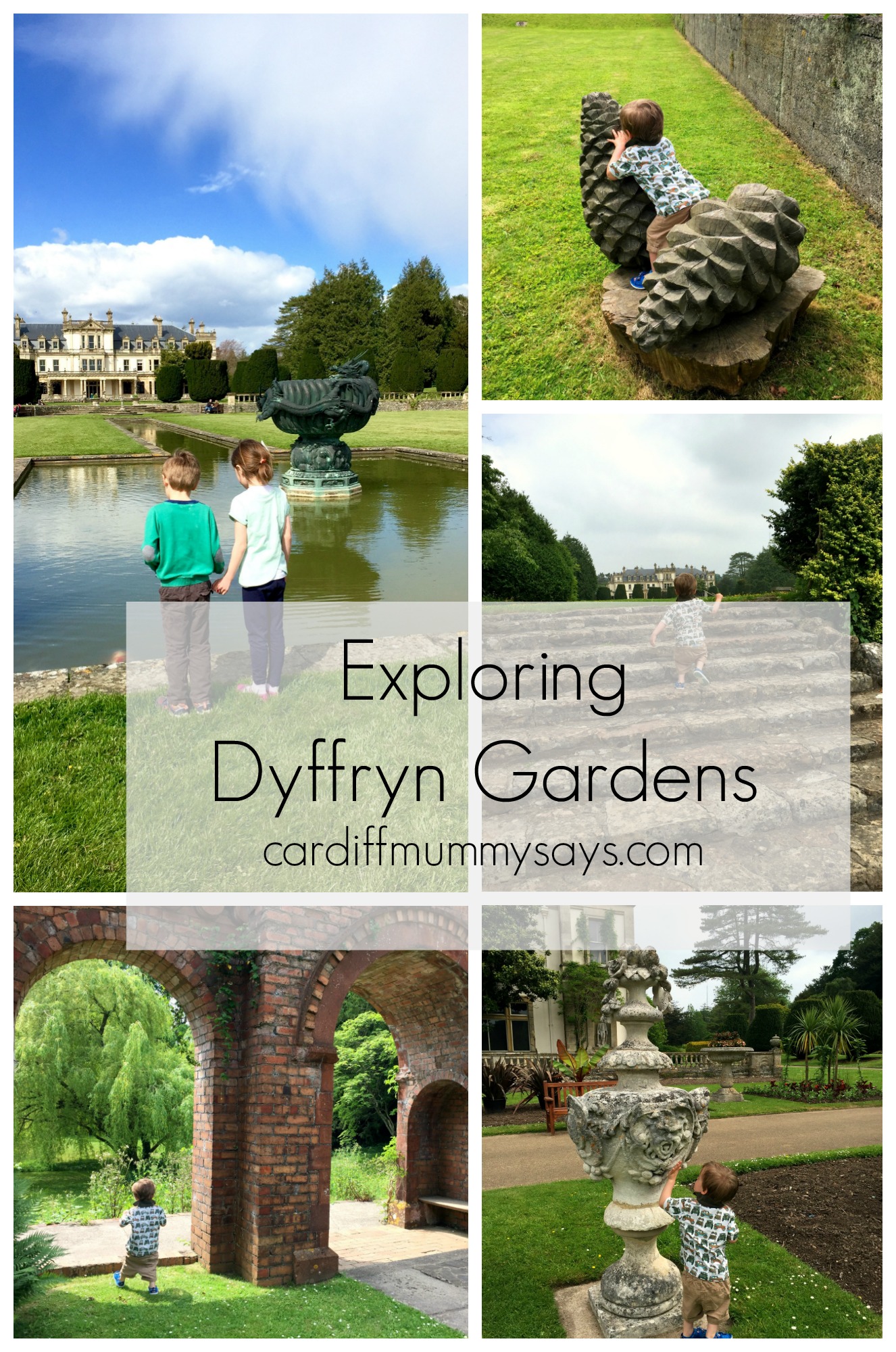 Have you been to Dyffryn Gardens? What are your family’s favourite things to do there? Do let me know in the comments below, on the Cardiff Mummy Says Facebook page or by tweeting me on @cardiffmummy

For more ideas of local family-friendly days out, see the Cardiff section of Cardiff Mummy Says, or follow me on Instagram.

Homepage » Cardiff » Exploring Dyffryn Gardens in the Vale of Glamorgan

6 Comments to Exploring Dyffryn Gardens in the Vale of Glamorgan