It’s such a special and exciting experience meeting unusual animals face to face when you’re a child.

Last Friday, my two boys – Little Man O, aged 4 and a half, and Toddler Boy I, aged 2 – got up close and personal with six beautiful owls at Parc Play’s toddler days. The owls were visiting from Ebbw Vale Owl Sanctuary, somewhere we’ve been meaning to check out for a while now. Little Man had been talking about the owls non-stop and I could tell his big sister, Little Miss E, aged 6, was disappointed to have missed out while she was at school. So this weekend, we headed up the A470 to the Valleys, to explore the sanctuary. 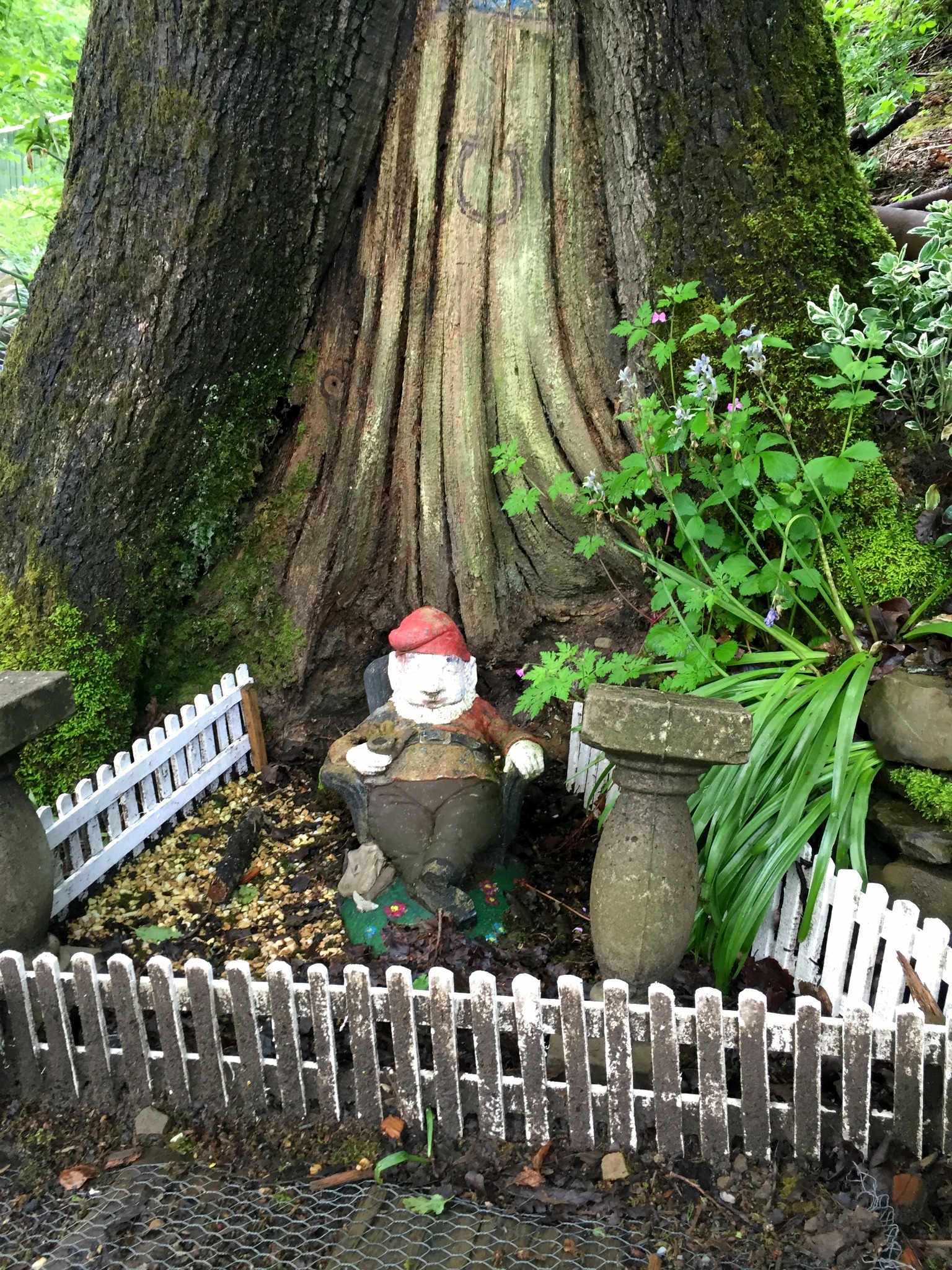 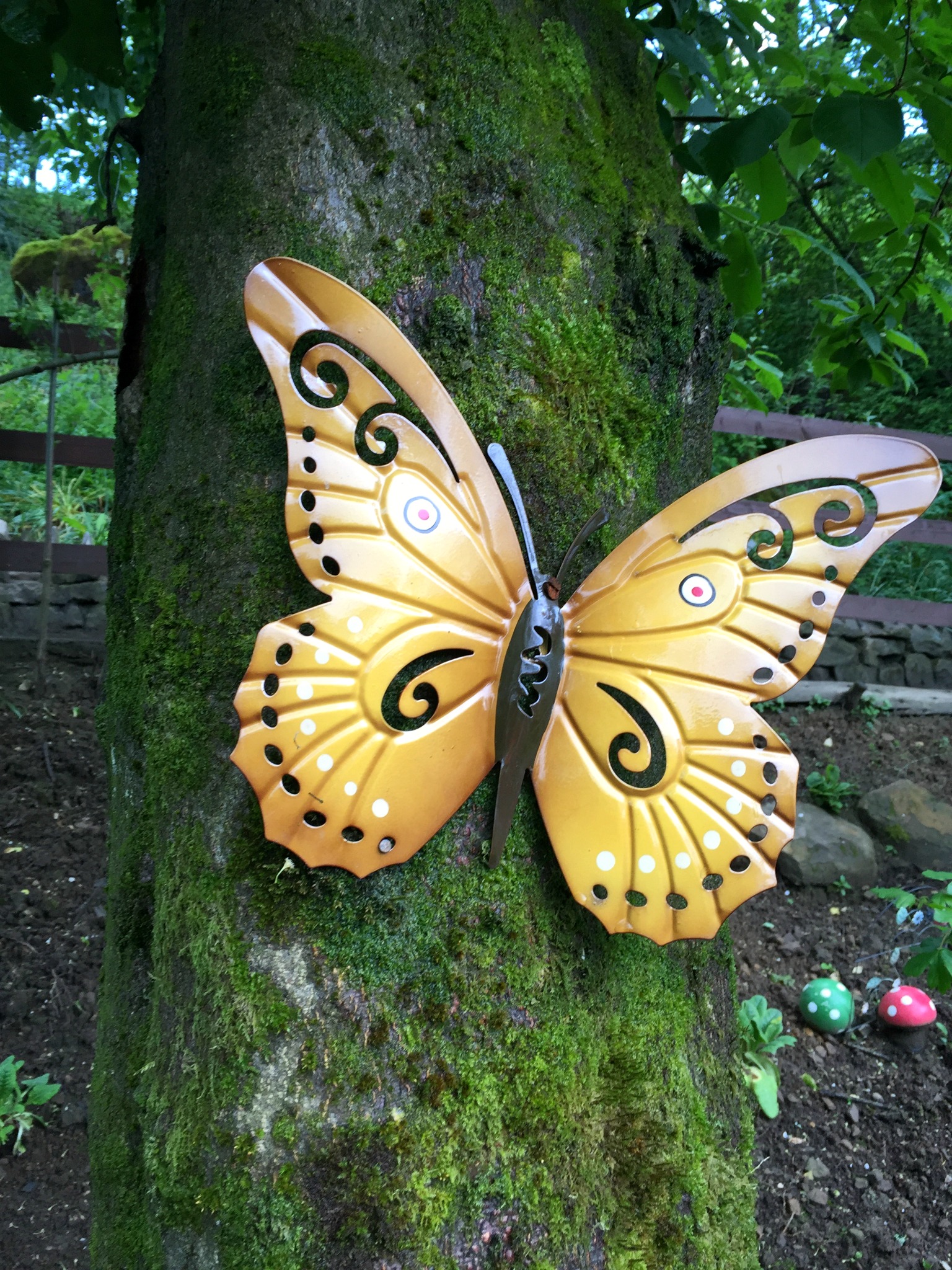 Based in the Festival Retail Park, it took us about 45 minutes from North Cardiff. It’s not a full day out – you only need an hour or two, but if you’re in the area, it’s worth popping by. If you park in the shopping centre car park, you’ll see the sign for the super tubing place (which always seems to have offers on Groupon/LivingSocial etc), and the sanctuary is just a short walk down that hill. There’s also wooden adventure playground on site. However, the outlet shopping centre itself is not a patch on McArthurGlen at Bridgend. There’s a Clarks and Marks and Spencer, although neither have a children’s department, and a Gap, which does, where we picked up a few bits and pieces, with an email discount making the prices an absolute bargain.

The sanctuary is home to more than 50 owls and other birds of prey, including hawks, falcons and buzzards, plus a few reptiles and a tortoise. 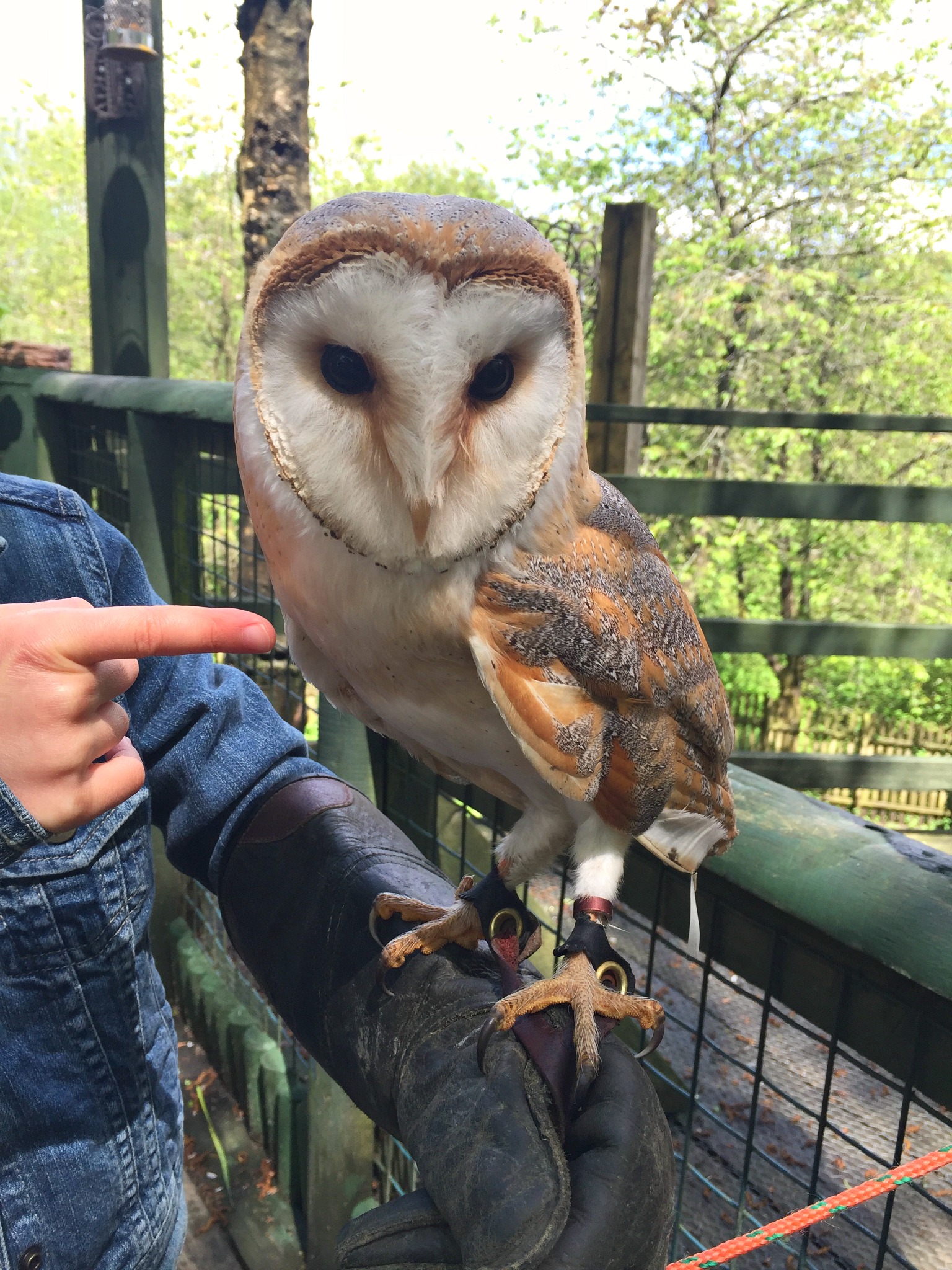 Under the guidance of owner Malcolm Jones, the centre is run completely by volunteers, who care for the injured birds. Some of them are released back into the wild, but the majority can’t be because they are either captive-bred, unwanted pets, non-native species, or too badly injured and wouldn’t survive.

The entrance to the sanctuary comes via a small woodland trail and garden, with a few gnomes, butterflies and other ornaments hiding in trees. 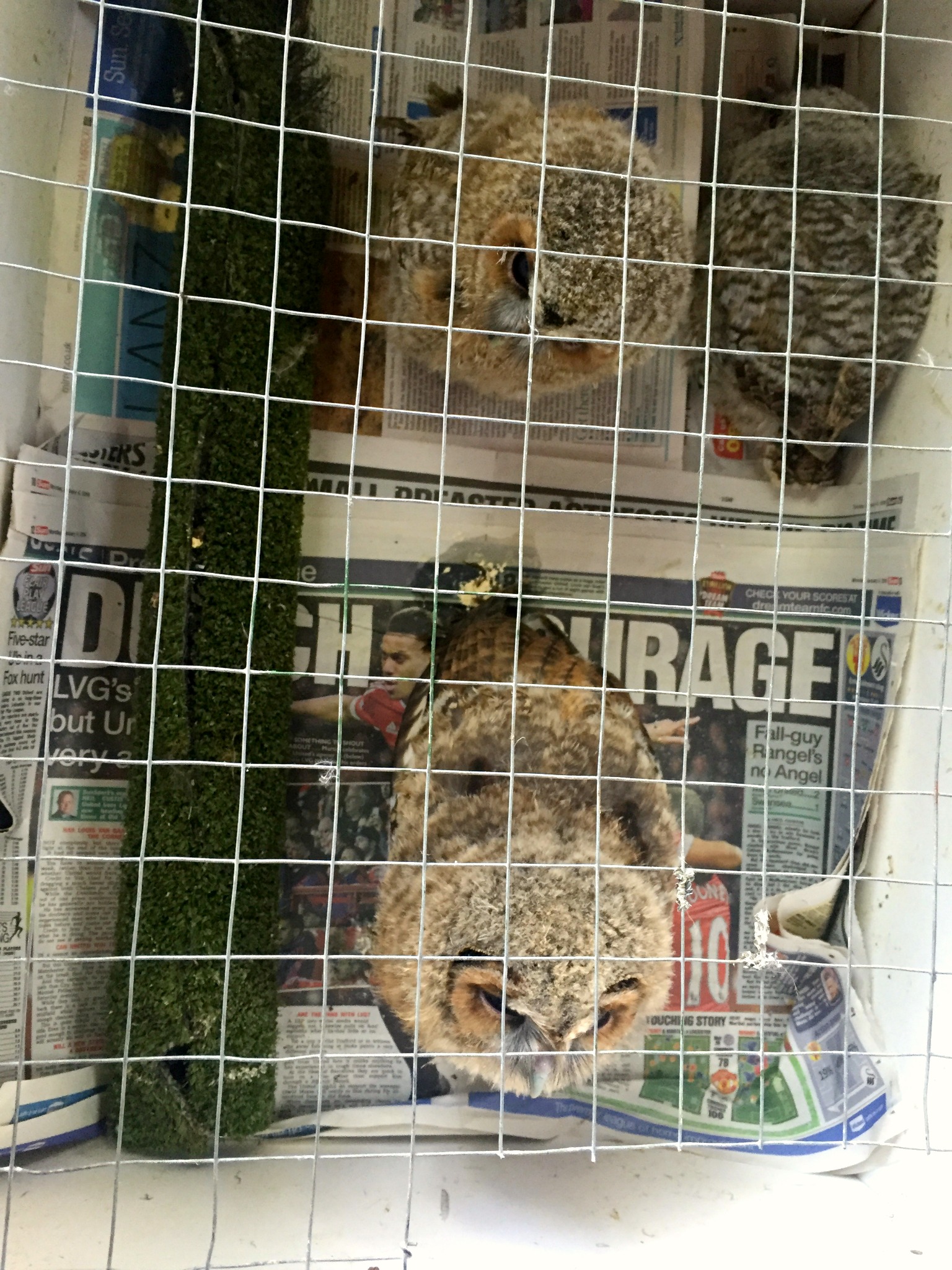 The birds themselves are housed in large green wire cages, under a canopy of trees, and on two levels. The site is buggy friendly, although some of the paths are a little steep.

The owls are such beautiful creatures and my children were completely transfixed. We wandered around twice, reading about the various birds. Little Man was excited to tell Miss E and Cardiff Daddy what he had remembered from meeting the owls at Parc. Little Pete was one of his favourites – one of the smallest owls, Pete is a 13-year-old screech owl and apparently a grumpy old man. They also liked the tawny eagles living in the tree house cage.

Miss E and Little Man were thrilled to hold a barn owl called Scarlett in the meet-and-greet area. One of three sisters born at the sanctuary, she was so calm and tranquil, and had the softest feathers, a couple of centimetres deep.

We also met three baby owls, with the most gorgeous downy fur. They had come to the sanctuary in the last couple of weeks having been rescued from the wild. People often see them on the ground in woodland and take them home, thinking they’ll make cute pets, before realising they can’t cope with them.

Although the centre is free to visit, it relies heavily on donations from visitors to fund its work, as well as money made from school educational visits, fetes and displays. 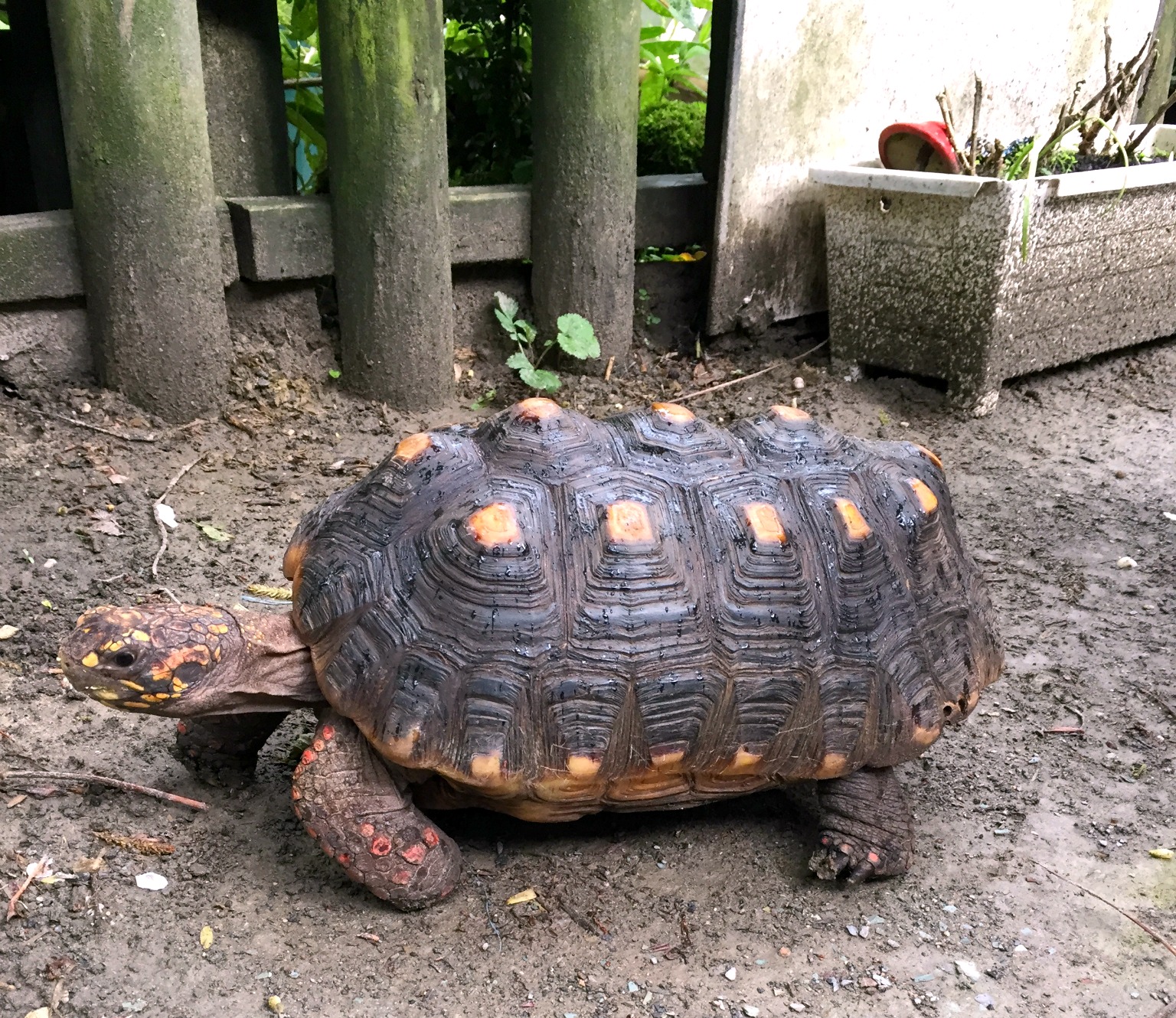 The fact that all the money goes into caring for the birds is reflected in the rustic appearance of the centre. The shop and visitor area, for example, is a little musty and run down, and the cages are a bit dark. But the staff were super-friendly and keen to talk to us about the birds. There was also a table with books, toys and pictures of owls for children to colour and play with, as well as various books, CDs, DVDs and videos on sale alongside postcards and photos of the birds. It reminded me of the Wales Ape and Monkey Sanctuary, which I wrote about last summer.

Ebbw Vale Owl Sanctuary is not on par with the more commercial farm parks and the likes. And nor does it pretend to be. Its prime purpose is to care for animals which otherwise would not still be alive, and donations from visitors help fund this work. We found it a fascinating place, run by caring volunteers and were more than happy to support their endeavours.

Have you visited with your family? Let me know in the comments section below, on the Cardiff Mummy Says Facebook page or by tweeting me on @cardiffmummy

For all our reviews of days out in South Wales, see the Cardiff section of Cardiff Mummy Says. 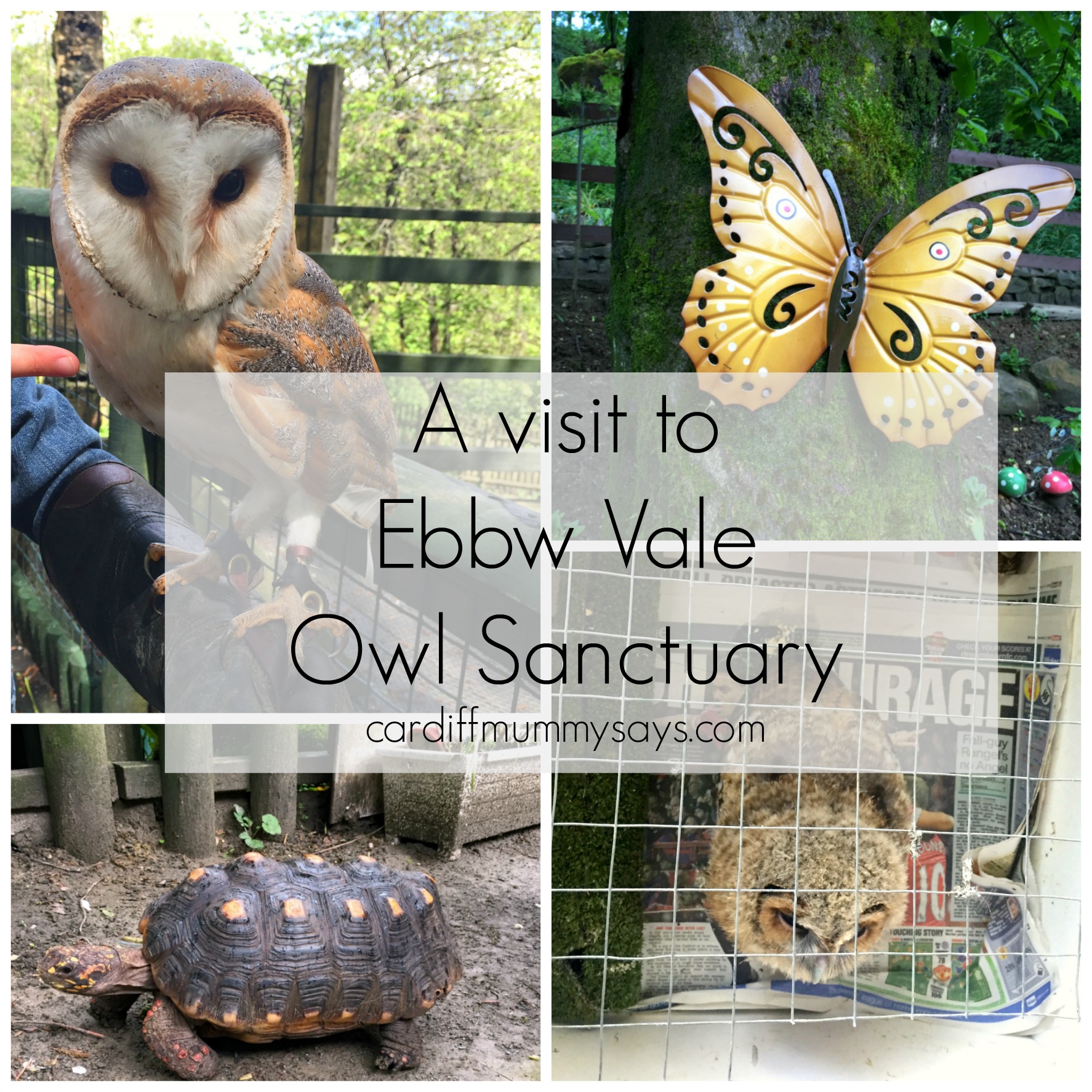 *Disclaimer – we visited Ebbw Vale Owl Sanctuary on our own accord and they did not know we would be writing this review.

3 Comments to A visit to Ebbw Vale Owl Sanctuary