Pantomime is such a curious British tradition. Men dressed as women; booing and hissing; shouts of ‘oh, no it isn’t’ and ‘oh, yes it is’; innuendo-laden jokes that go well over the children’s heads but leave the adults crying with laughter.

I was trying to explain the concept of panto to my eldest two children – Little Miss E, aged 6, and Little Man O, aged 4, before yesterday’s performance of Aladdin at Cardiff’s New Theatre but despite them being quite experienced theatre-goers for their young ages, I’m not sure anything could have prepared them for experiencing their first panto for themselves.

They absolutely loved the show, which opened on Saturday and runs until Sunday 17th January. They shouted their little hearts out, danced and laughed and made me promise we could see next year’s panto (Peter Pan) before we’d even left the theatre.

Cardiff Daddy and I thought it was fantastic too. We used to go to the panto every year as part of my job as an arts journalist, way before we had children, and Cardiff Daddy would laugh louder than anyone else in the audience and re-tell all the cheesy jokes for the next year. So to take our eldest two children along for their first panto was such a treasured experience.

Aladdin is a real spectacle of a show packed full of lavish costumes, big choreographed dance numbers, fantastic special effects and humour for all ages. In short, it is absolutely brilliant and although it’s one of the more expensive pantomimes in South Wales, it is definitely worth the money. 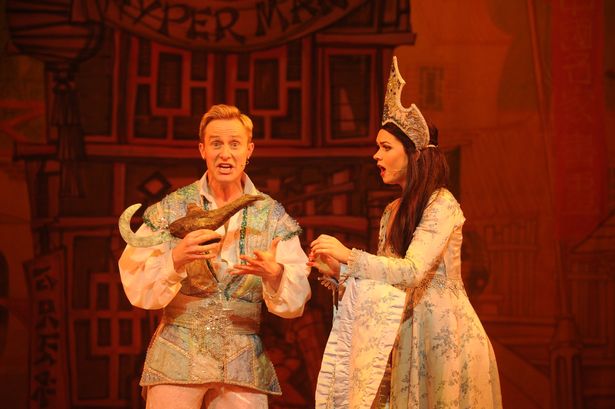 This year’s show reunited the cast from 2014’s Cinderella, and while I didn’t see it myself I know it received brilliant reviews and the chemistry between the principal actors was highly praised.

It was great to see so many local performers among the main cast.

Rhondda boy Ian H Watkins was the leading man Aladdin, full of innocent charm. H, as he is more commonly known, made his name in the band Steps and I love that he didn’t take himself too seriously with plenty of jokes about his former pop band and several of the musical numbers being his old hits, including Tragedy, Chain Reaction and Stomp.

Holly Bluett, from Cardiff, made for a delightful Princess Jasmine. Miss E thought Princess Jasmine was incredible in her beautiful gowns and with a warm and soothing voice that was perfect for her love ballads with Aladdin. 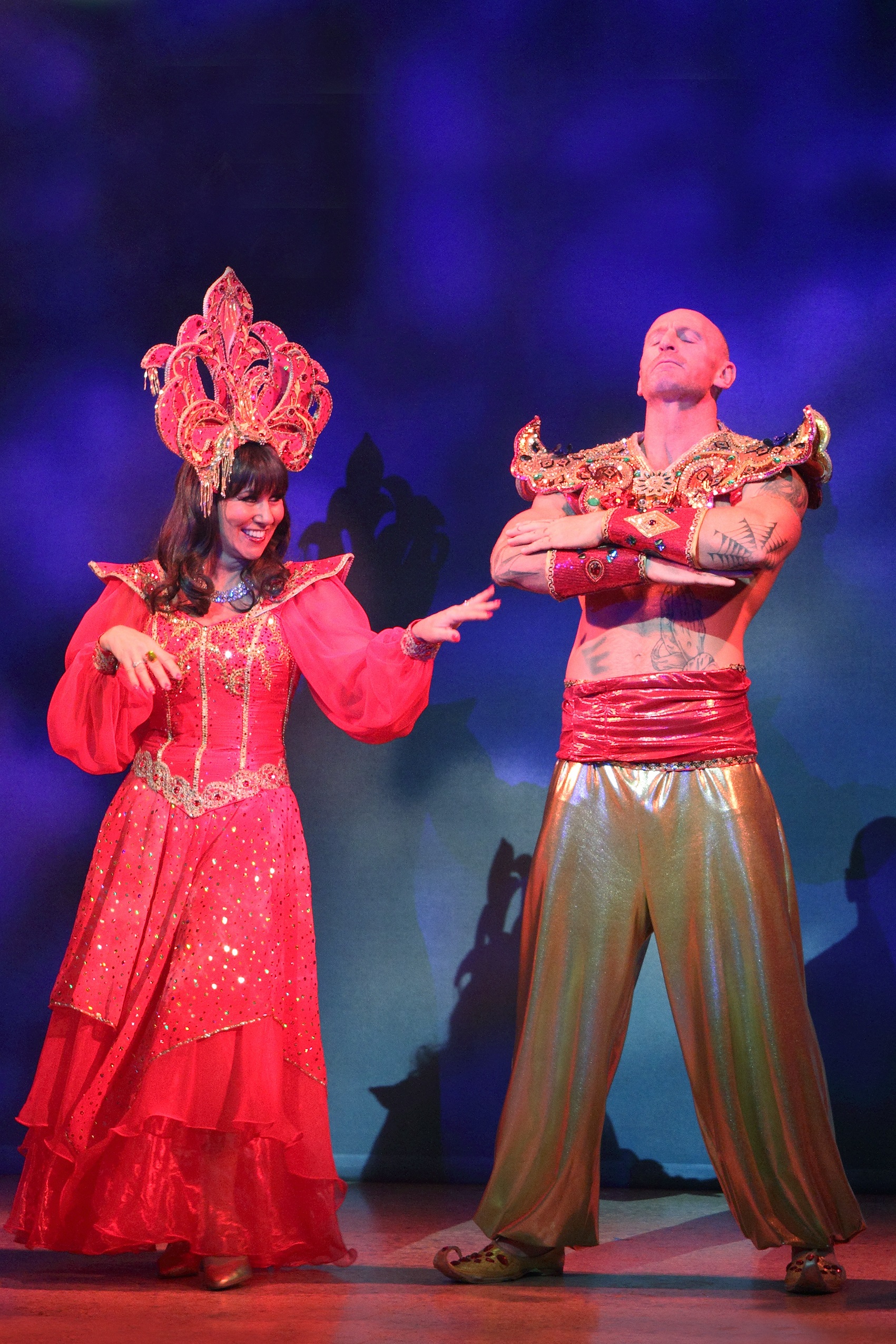 Welsh rugby star Gareth Thomas, better known as Alfie, was the Genie in the Lamp. His musical number Genie of the Lamp set to Meghan Trainor’s All About The Bass was one of the show’s highlights for me. It was hilariously funny, but he also gave a strong performance with plenty of confidence. I wish someone would upload a video of it because I’m sure it would go viral (plus I’d love to watch it again!).

There were a few jokes around his sexuality – in 2009, he became the first professional sports player in the world to come out as gay while still playing. One joke in particular about his ‘coming out’ of the lamp got such a loud cheer from the audience, the adoration and support he has locally was quite emotionally overwhelming.

Carmarthen’s Mike Doyle as Widow Twankey had me crying with laughter on more than one occasion. With a fantastic array of colourful dresses and head pieces, he played Twankey with an over-exaggerated local accent and plenty of references to local places. His Shirley Bassey impression and musical number was particularly well-received by the audience. With over 25 years of panto experience, Doyle has a tremendous stage presence and perfect comic timing. He had a great rapport with Mark Llewellyn Evans, the emperor and Jasmine’s dad, who falls in love with Twankey.

Wishy Washy, played by North-Wales born comedian Andy Jones might have been Aladdin’s side kick of a brother, but he had some brilliant scenes too. One in particular which saw him using the contents of a grocery shop to tell a story was absolutely brilliant. My children thought this was hilarious – even though most of what was being said was laced with humour that went completely over their heads.

Joining the Welshies in the cast was Linda Lusardi – the former model who has carved an impressive career as an actress of stage and screen – as Scheherazade, the glamorous Spirit of the Ring. Her real-life husband Sam Kane was a deliciously wicked Abanazar (not to mention the show’s director too). He absolutely relished his role of baddie, lapping up the boos and hisses. 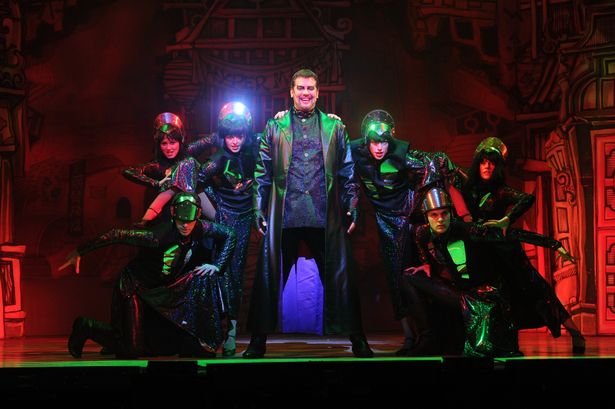 The camaraderie between the leading actors really made the show. At several points, they were laughing so much, it was a wonder they could continue performing. In any other kind of performance that would be incredibly unprofessional, but in panto land it just makes you realise what a great time they must all be having behind the scenes and how much they are enjoying themselves, which just adds to the audience experience. There were a couple of humorous moments where I genuinely couldn’t work out if they were planned or just happened, as they were delivered with such perfect comedic timing and genuine laughter on-stage. Their Welshed-up version of 12 Days of Christmas was sheer brilliance.

With five weeks of performances, and two performances a day on lots of those dates, that sense of team is what will keep the show just as fresh and lively for later audiences.

My children also loved to see the child dancers from The Lorri Guppy School of Dance, who joined the main chorus for several of the musical numbers.  Despite some of them being very young, they danced and delivered their lines with such confidence, with the smallest members providing a real ‘ahhh factor’.

I don’t want to give too much away, but the special effects deserve a mention too, in particular the magic carpet scene which left the audience gasping out loud.

A passionate cast, colourful costumes, humour, big musical numbers, romance, good triumphing over evil… this is a real festive treat which the adults in our group enjoyed as much as the children. It’s everything you could want from a pantomime, and more. We definitely recommend it. 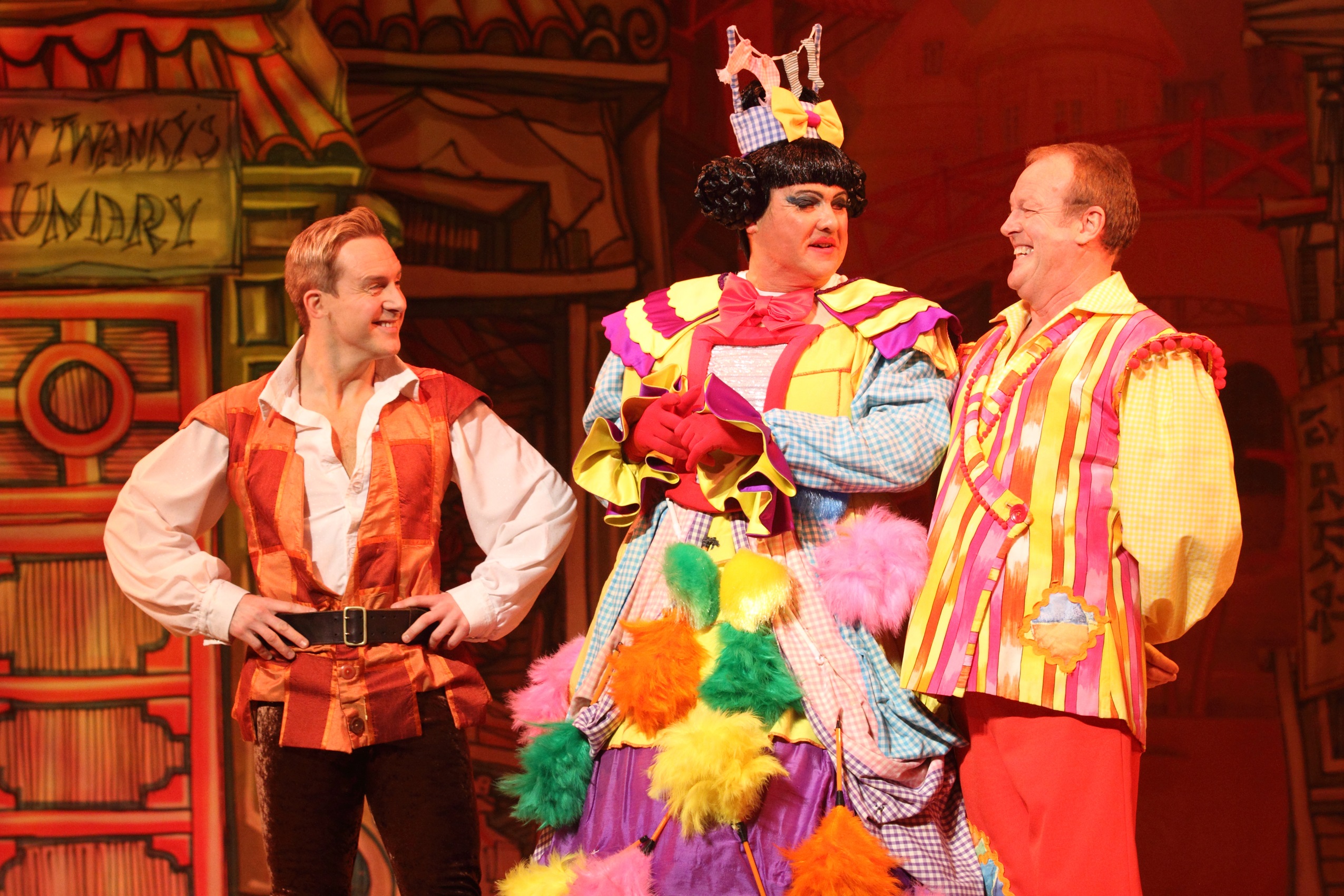 Have you been to see Aladdin or are you planning on going? I’d love to know your thoughts in the comments section below, on the Cardiff Mummy Says Facebook page or you can tweet me on @cardiffmummy

You might also like this post: 75 family festive events in and around Cardiff, including where to see Father Christmas, or see the Cardiff section of my blog.

We received a family ticket to Aladdin for the purposes of review.