Since it was first published in 1957, as an antidote to the dull and uninspiring children’s first reading books which had been criticised for turning children illiterate, The Cat In The Hat has sold millions of copies worldwide and won countless awards and accolades.

It’s a fast-paced and surreal tale of an unnamed young boy in the role of narrator and his sister Sally, left at home while their mother goes out for the day. While she is out (and don’t get me started on the fact that two young children have been left at home unattended all day), the children are stuck inside due to the rain, getting bored. Until, that is, a loud bump reveals a curious visitor in the shape of a black and white cat wearing a tall red and white hat and a dickie bow. 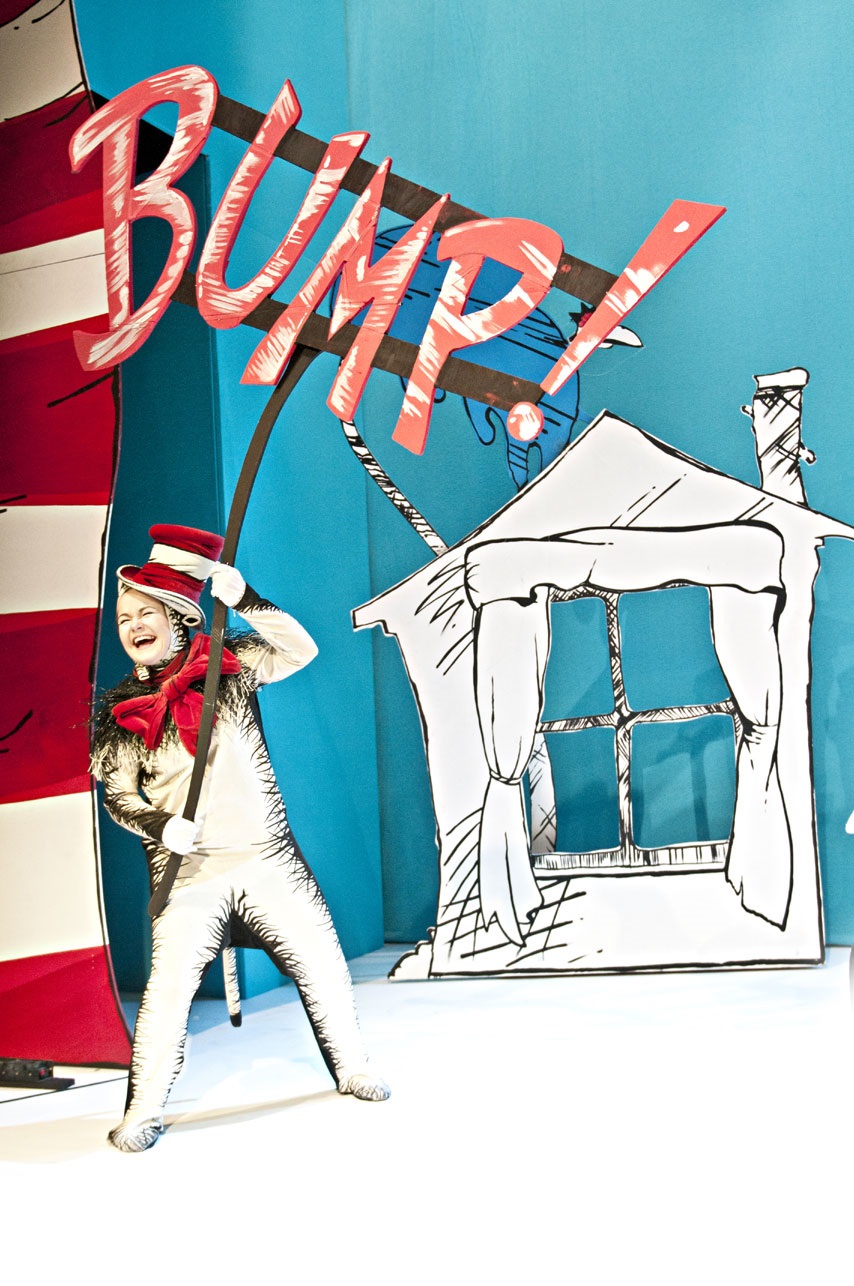 He creates havoc around the house, before unleashing two blue-haired companions, Thing 1 and Thing 2, who add to the chaos, flying kites indoors, while the goldfish acts as the voice of reason telling the children their mother would not be pleased and advising the cat to leave.

With the house in complete disarray (although to be honest with three children of six and under, my house looks like this most of the time without the aid of a cat) the children panic when they spot their mother returning home – until the cat reveals a special machine which magically tidies everything away (where can I get one?!), and then disappears.

The 2003 action film, starring Mike Myers was panned by the critics, so much so that Dr Seuss’s wife, Audrey Geisel said she would not allow any more film adaptations of Dr Seuss’s work.

One of the criticisms around the film was the fact that it was so different to the book, adding so many subplots and new characters that it hardly resembled the much-loved original.

You can understand the need to expand upon a book when you’re trying to get 80 minutes of film out of a 10-minute children’s reading book. But with this in mind, I admit I wasn’t sure what to expect from the stage version, originally produced by the National Theatre of Great Britain and adapted and originally directed by Katie Mitchell, and currently visiting Cardiff as part of its UK tour. 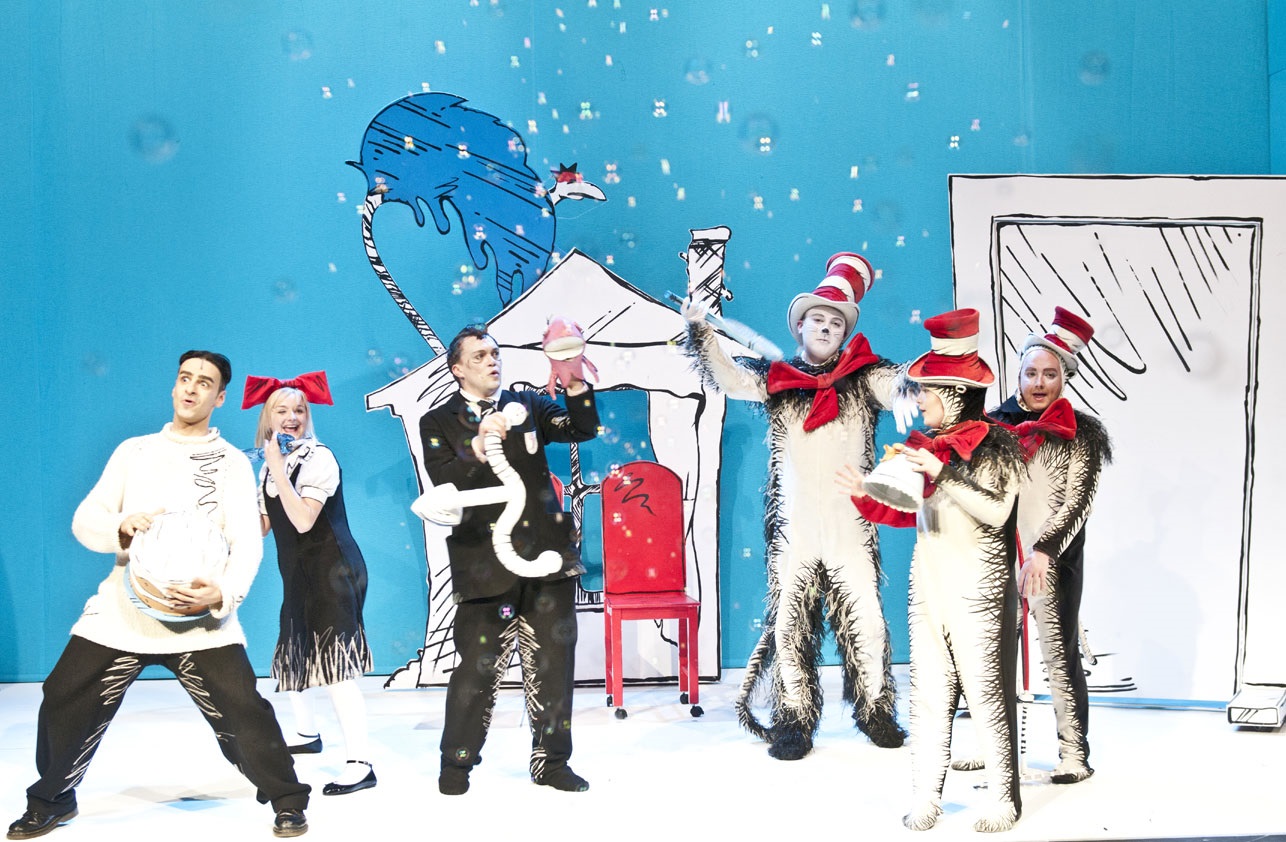 In short, it wasn’t perfect – but it was a whirlwind 50-minutes of entertainment that kept all three of my children (Little Miss E, age 6, Little Man O, 4.5, and 23-month-old Toddler Boy I) engaged and laughing throughout.

The stage looked exactly like a page from the book, with the scenery and costumes faithfully replicating Dr Seuss’s familiar blue, red, white and black illustrations. I was pleased that the script stuck to the text of the book (which incidentally was written from a list of just 220 words), the narrative being padded out with plenty of perfectly-timed and well-choreographed physical theatre, with the scene where the cat balances books, a ball, a cake, and the goldfish (cleverly played in hand puppet form). 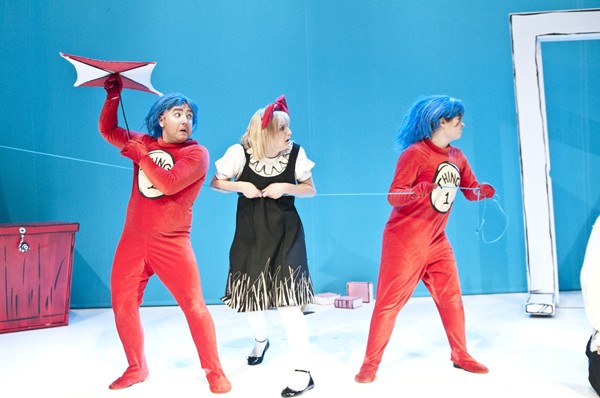 There were actually three cats in this production – the main Cat in the Hat, plus two sidekicks who looked the same other than the fact their hats were smaller. My children found this confusing to start with and didn’t understand why there were three cats running around the stage in the opening sequence. However, it soon became clear that the two other cats were there as stage hands, helping to move props around the stage, and after a while I felt it worked well. To be honest, the whole show was so surreal, that a couple of extra cats only added to the atmosphere. 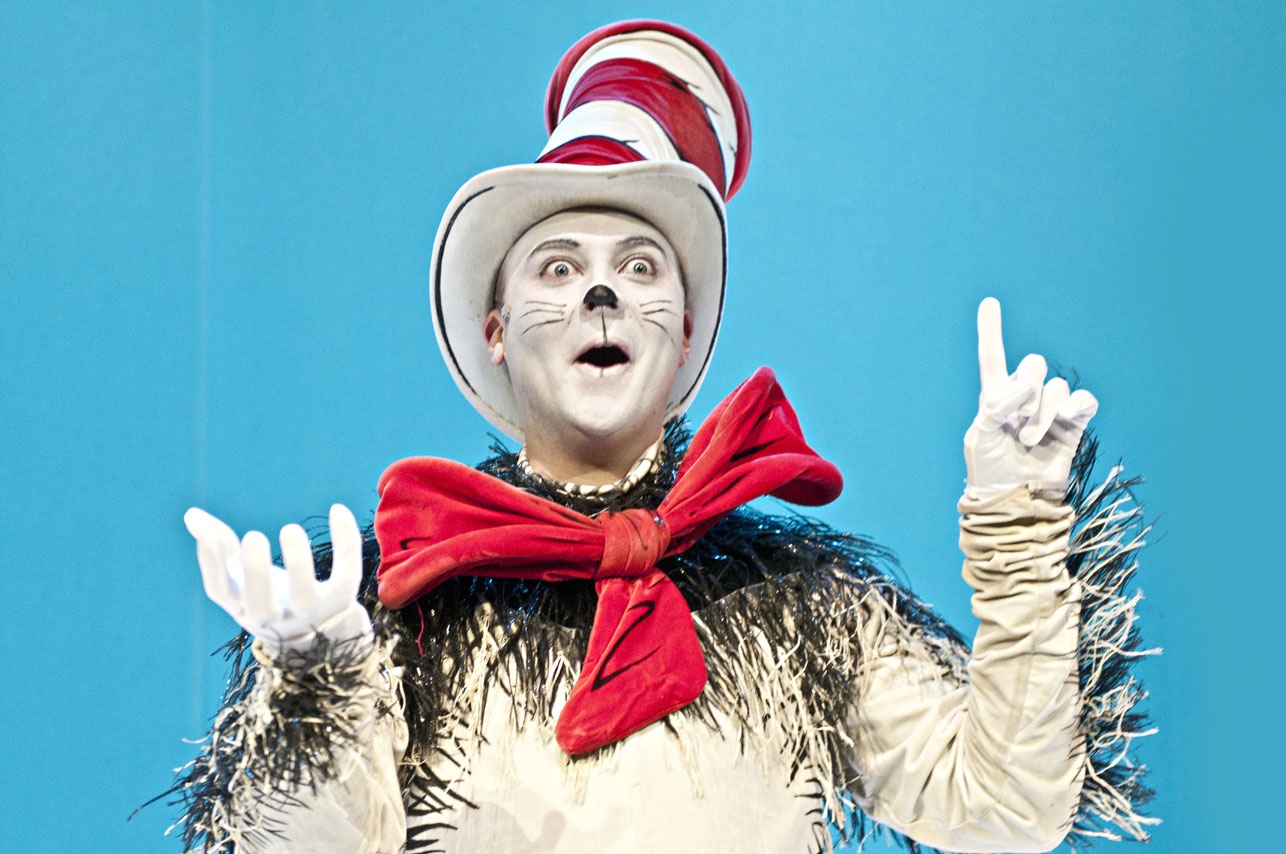 I would have liked to have seen some more audience engagement in the first half of the show. Later on, giant balloons bounced around the auditorium and Thing 1 and Thing 2 dashed around the theatre stalls and circle, interacting with the audience. A bit more of this earlier on in the show, or perhaps some singing or opportunities for the children to shout out, would have lifted the earlier half and stopped it feeling a little flat.

The ending of The Cat In The Hat always makes me laugh. The mother comes home and asks Sally and her brother what they got up to all day. The two debate whether they should tell their mother what went on. “Should we tell her about it? Now, what SHOULD we do? Well… What would you do if your mother asked YOU?” When my children were little they used to say that yes, they would tell me, but now the answer is always no. As indeed it was from the whole of the young audience who delighted in shouting out their response.

The Cat In The Hat is at the New Theatre Cardiff on Saturday 20th and Sunday 21st February 2016. There are limited tickets available here, with a better selection for the Sunday performances.

Have you seen The Cat In The Hat theatre show? Do let me know in the comments section below, on the Cardiff Mummy Says Facebook page or by tweeting me on @cardiffmummy

We were given review tickets for this performance.