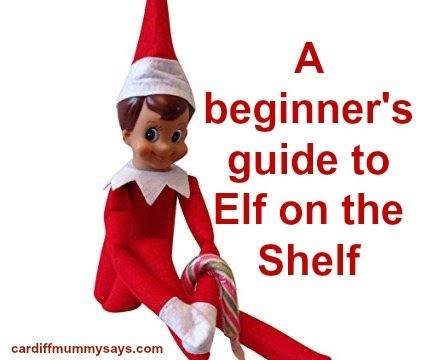 christmas, ELf on the shelf

I know it’s only the start of November, but I’ve already had two conversations in the last week about Elf on the Shelf and people are sharing elf-related articles on Facebook, so I figure it’s about time I wrote something about it on my blog. And what better place to start than with a beginner’s guide to Elf on the Shelf?

This will be our third year of taking part in Elf on the Shelf, and it’s been such a fun and magical family tradition in the run-up to Christmas.

I get asked a lot of questions about Elf on the Shelf, so here are my answers to the most common ones. If you’ve done Elf on the Shelf previously, then please share any advice you think would be handy for other parents. Also feel free to share pictures of what your elf has got up to. 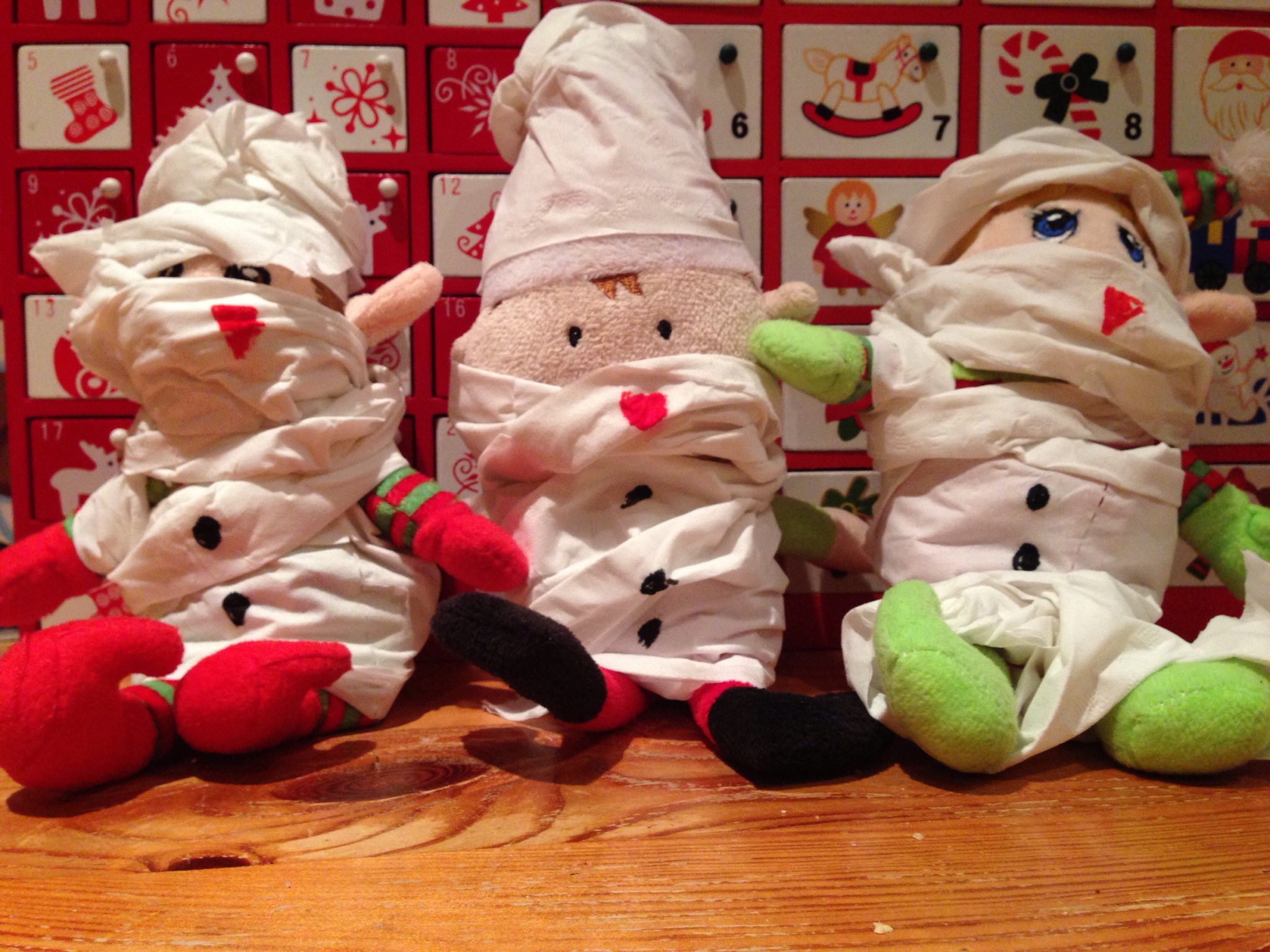 A beginner’s guide to Elf on the Shelf 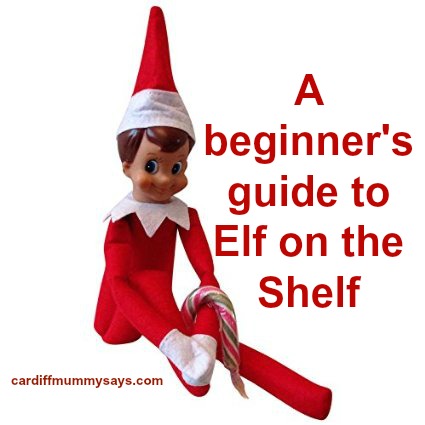 What is Elf on the Shelf all about?

Elf on the Shelf: A Christmas Tradition is a 2005 rhyming book that explains how Santa’s ‘scout elves’ hide in people’s homes to watch over events. When everyone is in bed, the elf flies back to the North Pole to tell Santa about the good and bad activities that have happened that day. When the family wakes in the morning, the elf has flown back and is hiding in a new place to be found by the family. In the book, the elf’s magic will disappear if he is touched, although you are allowed to talk to him and tell him your Christmas wishes so he can report back to Santa. Elf on the Shelf started in America, with the elves arriving after Thanksgiving (the last Thursday in November). Here in the UK, most people tend to start on 1st December and the beginning of Advent.

As it has grown in popularity, the Elf on the Shelf tradition has taken in all sorts of twists and turns as people adapt it to suit their families. Some elves hide, some elves create mischief and mayhem, others are better behaved! However you choose to adapt this tradition, it will certainly add a sparkle of festive magic.

Where do I get my Elf on the Shelf from? 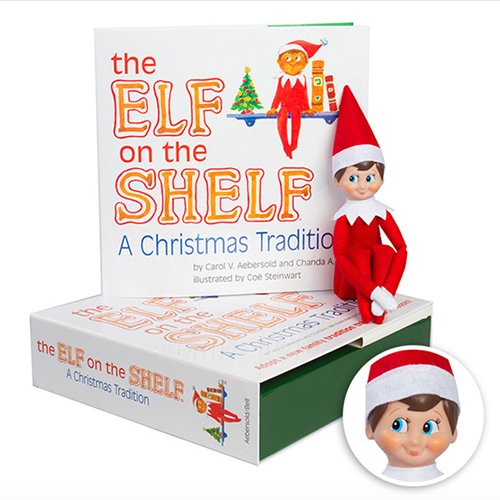 The official Elf on the Shelf looks like this. Some people think he looks a bit creepy, while a lot of people used to be put off by the price (they used to be £29.95 including the book from Amazon but are now a more reasonable £8). The first year we did it, we found two fluffy cuddly elves on Amazon for about £12 each (one male and one female). The good news is, the high street and the supermarkets have well and truly caught on to Elf on the Shelf and you can now pick them up quite cheaply. Last year, we introduced a third elf to our house to mark our third baby’s first Christmas. I found him for 99p in The Card Factory. Other mums reading my page told me they had found cuddly elves for around a fiver in Sainsbury’s and Ikea.  All the supermarkets seem to be doing elves that look like the official one and priced at around £3-£4.

Do I have to start Elf on the Shelf on December 1st and do I have to do it every day?

Not at all. You can start Elf on the Shelf any day you like. One mum told me last year that her elf only appeared at weekends when they were not up against the busy week-day rush. She told her children he had to go back to the North Pole to go to elf school and see his family during the week. Or maybe he can begin his stay in the week before Christmas, when the schools have broken up. It’s your elf, your tradition – you can do what best suits your family.

I don’t like the idea of the elf spying on my children and telling Father Christmas if they’ve been naughty.

Our elves arrive on 1st December, with advent calendars and a few other Christmas goodies. They also bring with them a letter saying they have come to our house to learn how children celebrate Christmas to help their work in the North Pole. Other families I know reinforce positive behaviour – so the elves will tell Father Christmas all the good things the child has done. Some elves bring special treats on some days – Christmas activities to do, such as books or crafts, or tickets for family days out. If you don’t like the idea of the elves reporting back to Father Christmas, then decide what works best for you and go for it. And if you don’t like the idea of the elves being naughty and possibly encouraging mischievous behaviour in your children, then keep their activities simple and fun. As I said earlier, it’s your elf and your tradition.

What if I forget to move my Elf on the Shelf?

It’s not the end of the world if your elf isn’t where he’s supposed to be when your children wake up in the morning. Act like it’s part of the magic; say you’ve heard elves can do this and it might mean he has something exciting up his sleeve. Maybe he can have assumed a new position when you get home from school, or when your child wakes up from an afternoon nap. The biggest thing that helps me is to set a little reminder to beep on my phone at 10pm every evening, just in case.

Elf on the Shelf is what you make of it. Some of the more elaborate scenes you see all over Pinterest might well take ages to put together, and if you have the time, then that’s great. However, most of us don’t have half an hour a day to construct a scenario for our elves. There’s nothing wrong with taking the easy path. We covered our elves with stickers. It took about 30 seconds. We put them in the pockets of the oven gloves. That took about 10 seconds. We sat them on a toy fire engine. Again, that took about 10 seconds. Wrapping them in loo roll took less than a minute, as did hiding them in the branches of the Christmas tree.

It helps to be prepared, so create a Pinterest board with ideas, follow the hash tags on Instagram or Twitter (#elfontheshelf #elfonashelf), save a couple of articles with ideas to your phone, join an Elf on the Shelf Facebook group, or make your own list and brainstorm ideas so you have something to refer to on those days when inspiration is low and life is busy.

How should my Elf on the Shelf say goodbye?

It’s worth letting your children know in your elf’s welcome letter how long they are staying for. Last year, ours left a little note on Christmas morning saying they’d had a fantastic time but were going back to celebrate Christmas with their own family now. You could get your children to leave their elf next to the mince pie and drink they leave for Santa, or next to the chimney, ready to catch a lift home on Father Christmas’s sleigh. Or perhaps spell out a goodbye with magnetic or Scrabble letters, rather than a formal letter. Maybe you could throw him/her a goodbye party or get your children to wrap their elf a Christmas present.

If you’re planning a pre-Christmas toy declutter, maybe your elf can ask for toys your children longer play with to take back to the North Pole so Father Christmas can recycle them for other boys and girls. Or maybe your elf sneaks away with no fanfare at some point on Christmas Day when your child is distracted with their new toys.

Some easy Elf on the Shelf ideas to get you started…. 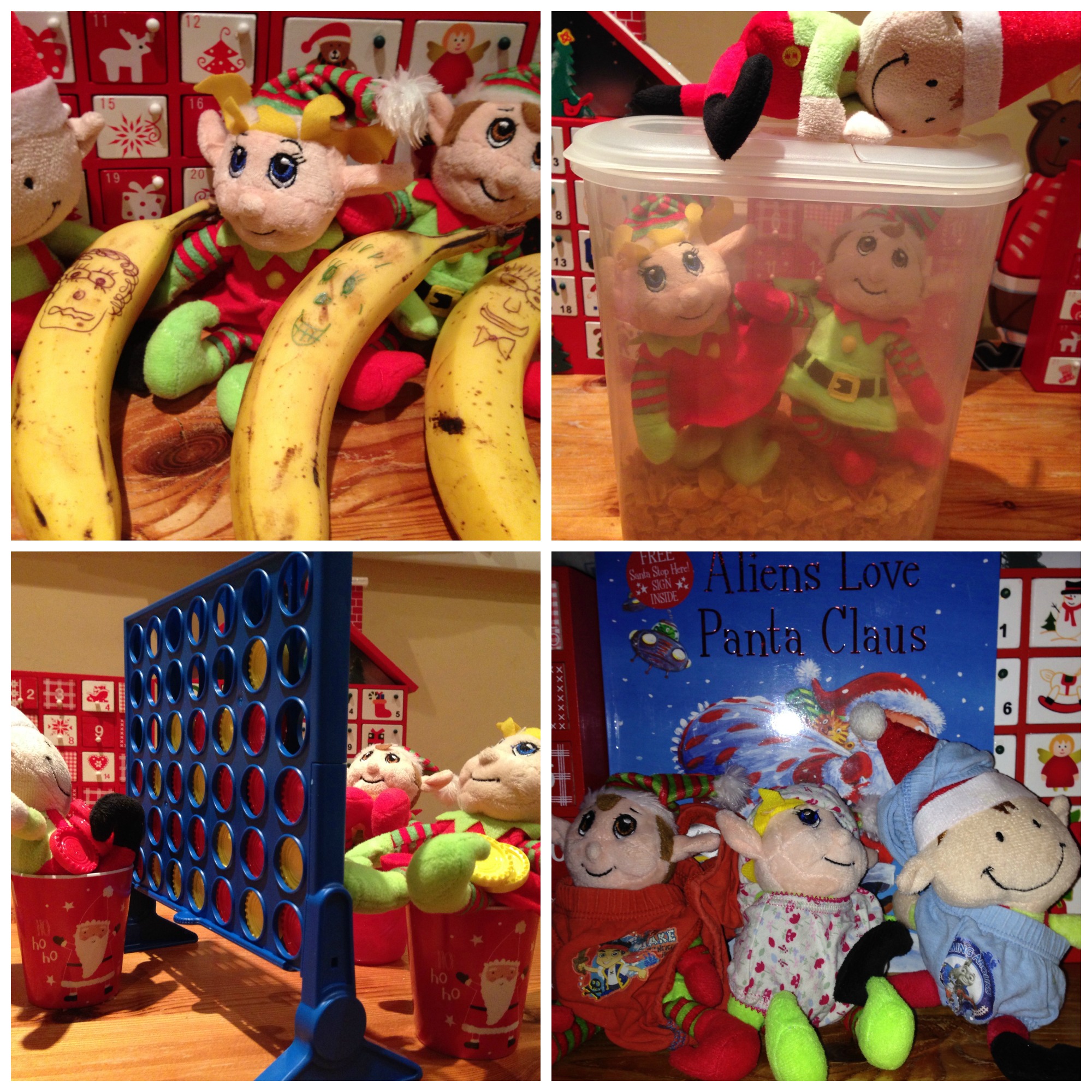 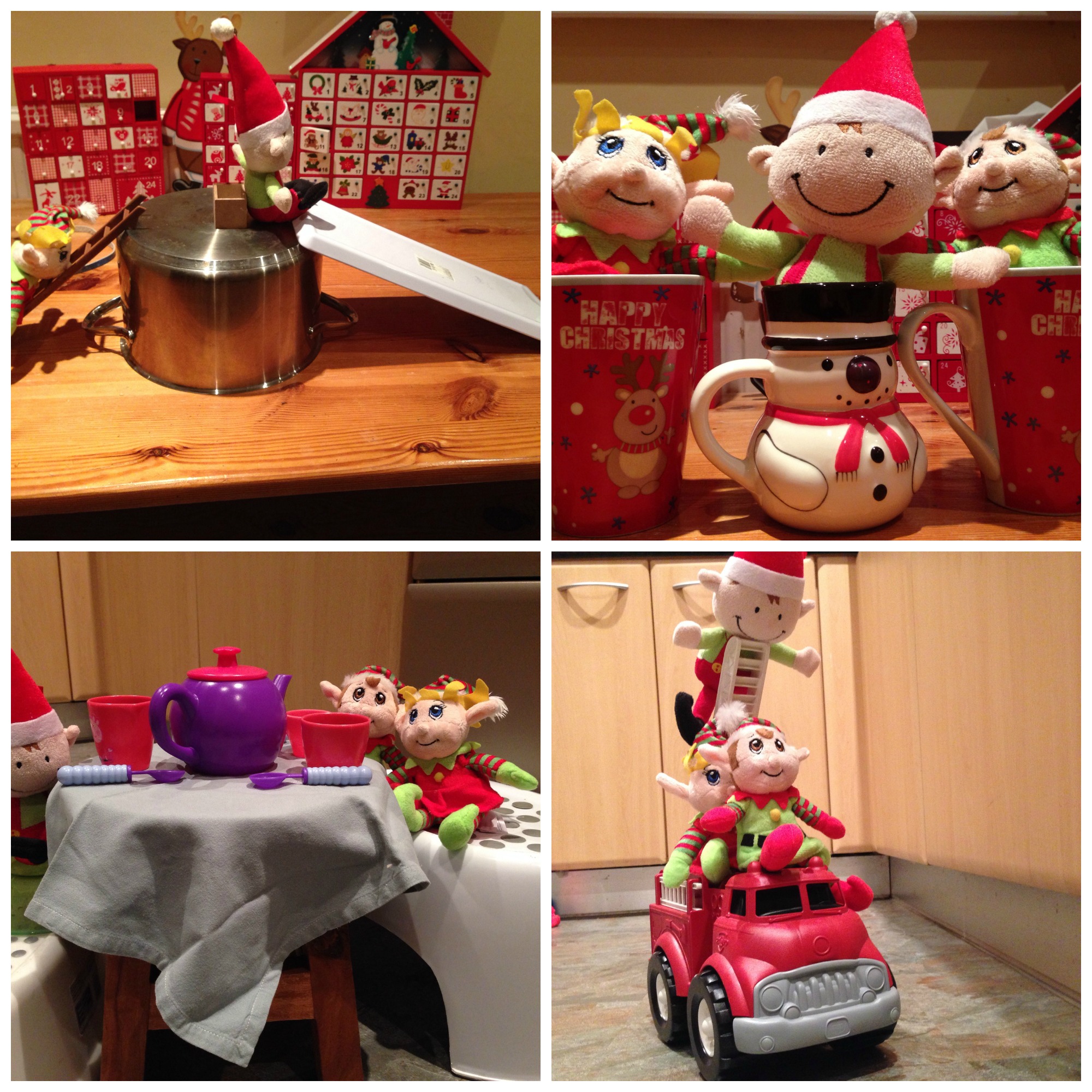 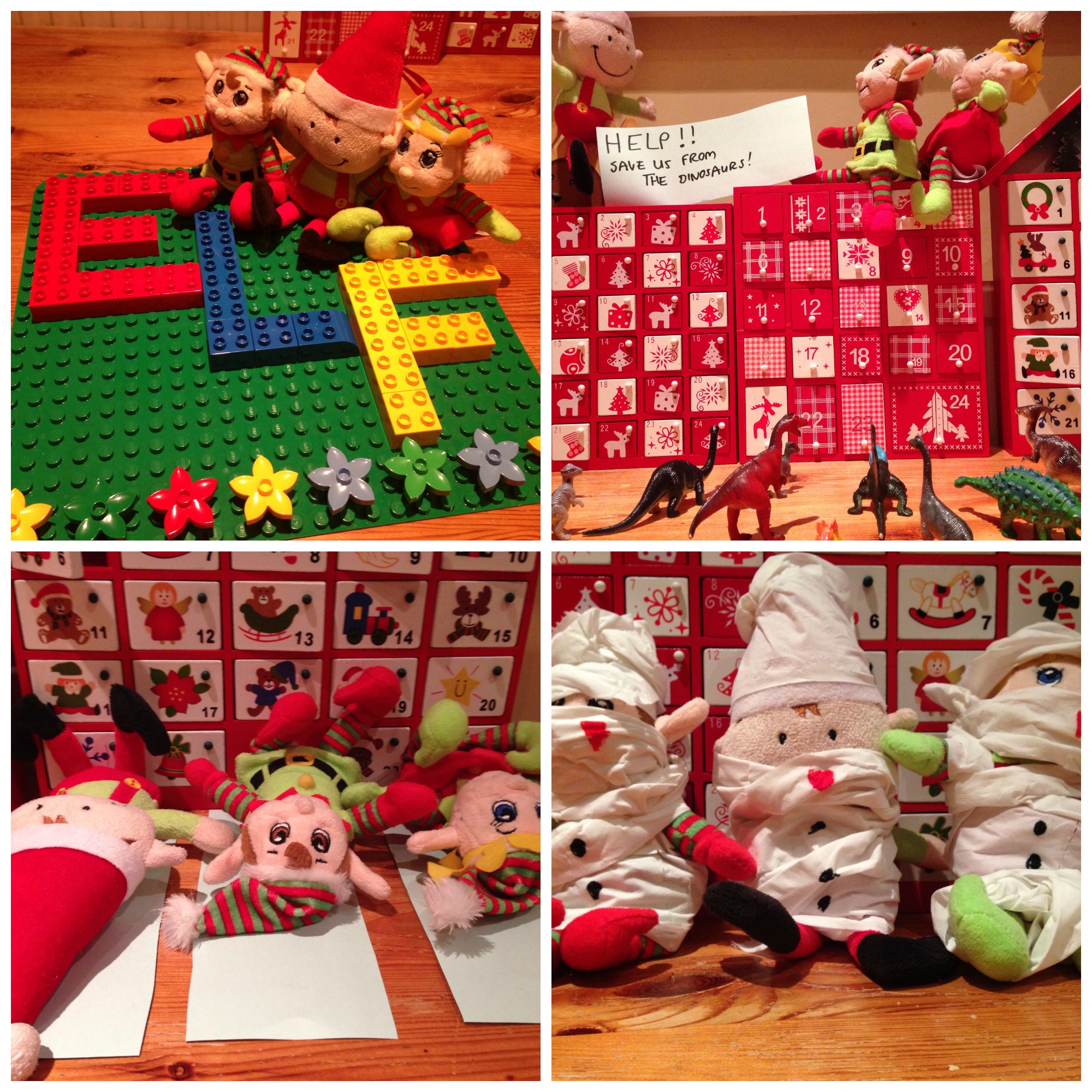 Homepage » Christmas » A beginner’s guide to Elf on the Shelf