It’s been a hard four months, hasn’t it? We’ve all been affected in different ways. But undoubtedly the Covid 19 pandemic of 2020 has shaped all of us, and will no doubt continue to shape us, as restrictions ease with the underlying worry that a second peak is imminent.

Right now though, we are slowly starting to find our ‘new normal’.

It’s strange. I’m finding it hard. I want to do things but I have this overriding feeling of worry. Am I risking myself? Am I risking my children? Am I being too cautious? Am I worrying too much? Not enough? Am I the only one who doesn’t want to go anywhere too busy or anywhere there might be a crowd?

It’s been a week since travel restrictions were lifted in Wales. Prior to that we could travel no more than five miles to meet loved ones, with all exercise needing to begin and end at home. Now, although we are being urged not to travel unnecessarily (whatever that means), there are no restrictions on travel. Although we are currently still only permitted to meet one other household outdoors while maintaining a two meter distance, we can form a mutually-exclusive ‘bubble’ with one other household and meet them indoors and even stay over. All of that seemed unimaginable a few short months ago when we shut out doors to the world and only emerged for the essentials.

Like a lot of people, we are finally starting to see family after four months – none of ours lived close enough to visit pre the travel restrictions lifting – and visiting favourite places we haven’t been to in a long time.

Last Monday was the first time my children had been in the car for 15 weeks and two days (they worked it out on the calendar). After work and homeschool was done for the day, we headed to the Wenallt, the ancient woodlands on Caerphilly Mountain. It was the last place we went before lockdown so it felt quite fitting it should be the first place we visited as we try to get used to this new way of life. My six year old said he felt nervous going in the car again. But all three were giggling with excitement and insisted on having the Fun Kids radio on loud. Other than one dog walker, we pretty much had the woods to ourselves. The sense of space, and seeing somewhere new, was immense. I felt quite emotional as we emerged into this post-lockdown world and could feel the tears in my eyes. “We survived,” joked my husband. We were sad to have missed bluebell season, as we visit every year, but in the grand scheme of things, it’s not that important. 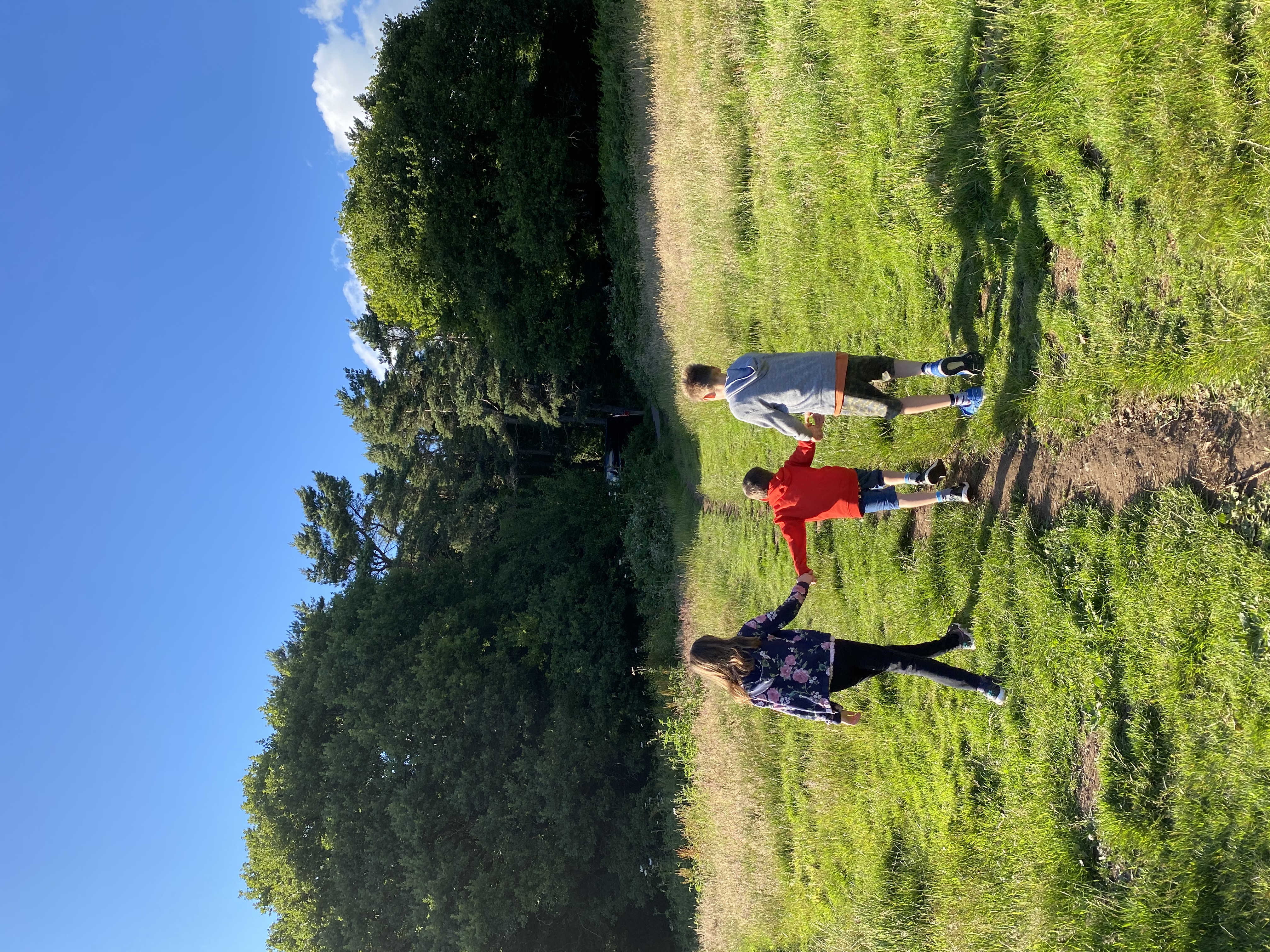 On Friday, again after work and homeschool were done for the day, we headed to Barry to see my parents for the first time since March. It was strange not being able to hug them and trying to keep a distance. But so lovely after so long. We avoided Barry Island as we didn’t want to go anywhere that might be busy, instead stopping by my favourite childhood chip shop and taking our food to Romilly Park and then over to the Knap and what we call ‘pebbly beach’.

As you’ll know if you’ve read Cardiff Mummy for a while, the sea is my happy place. Whenever I feel emotional, it’s the place I need to head to for comfort. Other than people, that was the thing I missed the most during lockdown. As much as I was grateful to have Roath, Heath and Bute Parks within reachable distance during lockdown, I missed the coast so much. I guess it’s the same for a lot of people who grow up in a seaside town – you don’t know how much you rely on it until you can’t see it every day. I stood on the pebbles, closed my eyes and breathed in deeply that fresh sea air. There’s something about seeing that the tide keeps on turning that reminds me the world keeps on turning and that I’m just a tiny part of it all. 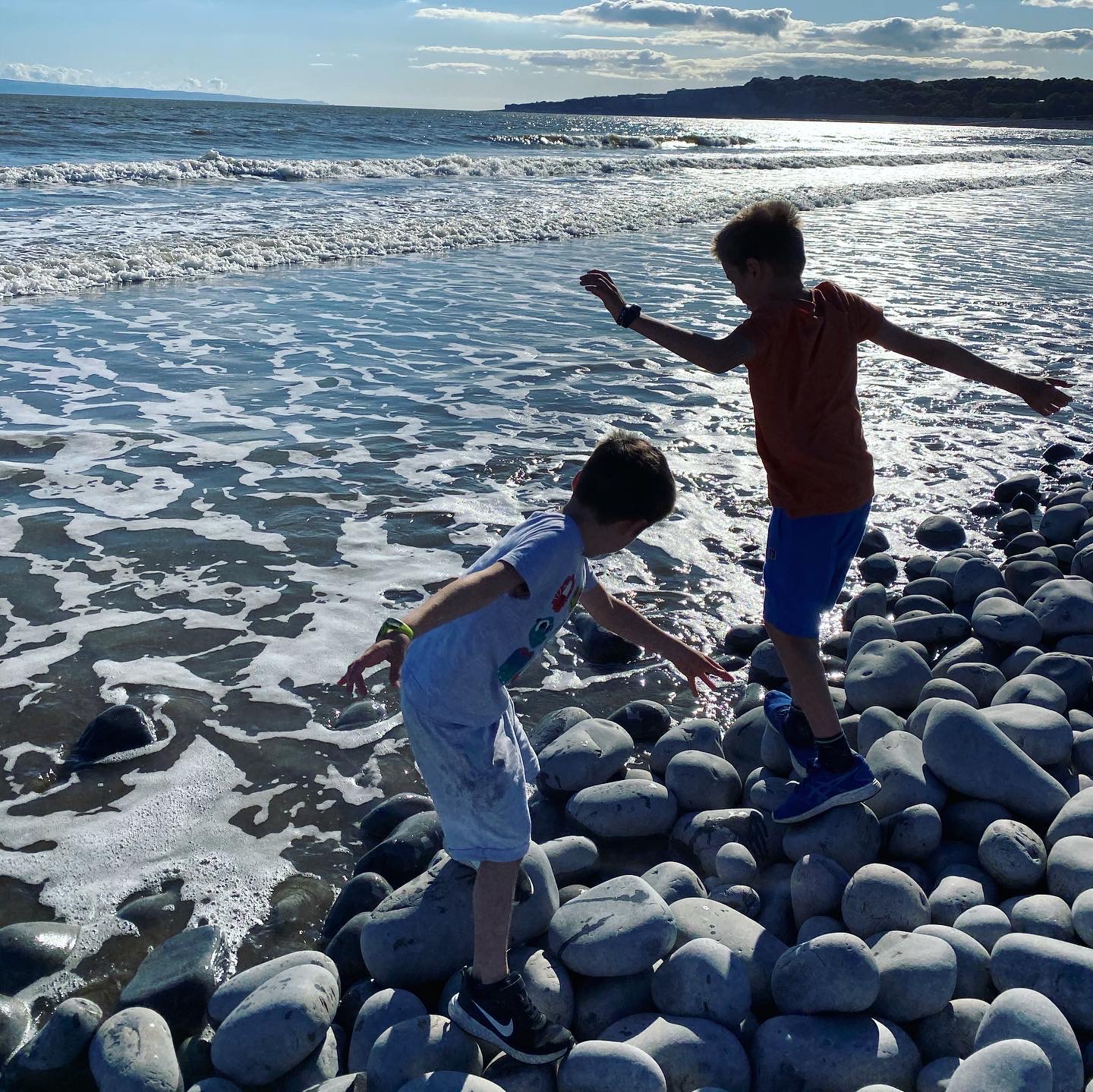 On Saturday we headed over the bridge for the first time since early March to see my husband’s side of the family. While his brother and sister and their families have been able to see their parents and each other, we hadn’t been able to see anyone, so it was an emotional (again socially-distanced) reunion. We had to see them each individually… which means making all kinds of preparations such as toilet stops – if we’re not bubbling with people, are we able to use their loos? We had to really; making sure to scrub everything down with disinfectant and so on.

With England ahead of us in coming out of lockdown, it felt noticeably different there. We drove past pubs and coffee shops fully open and with people inside them. The streets were so much busier. It felt strange. 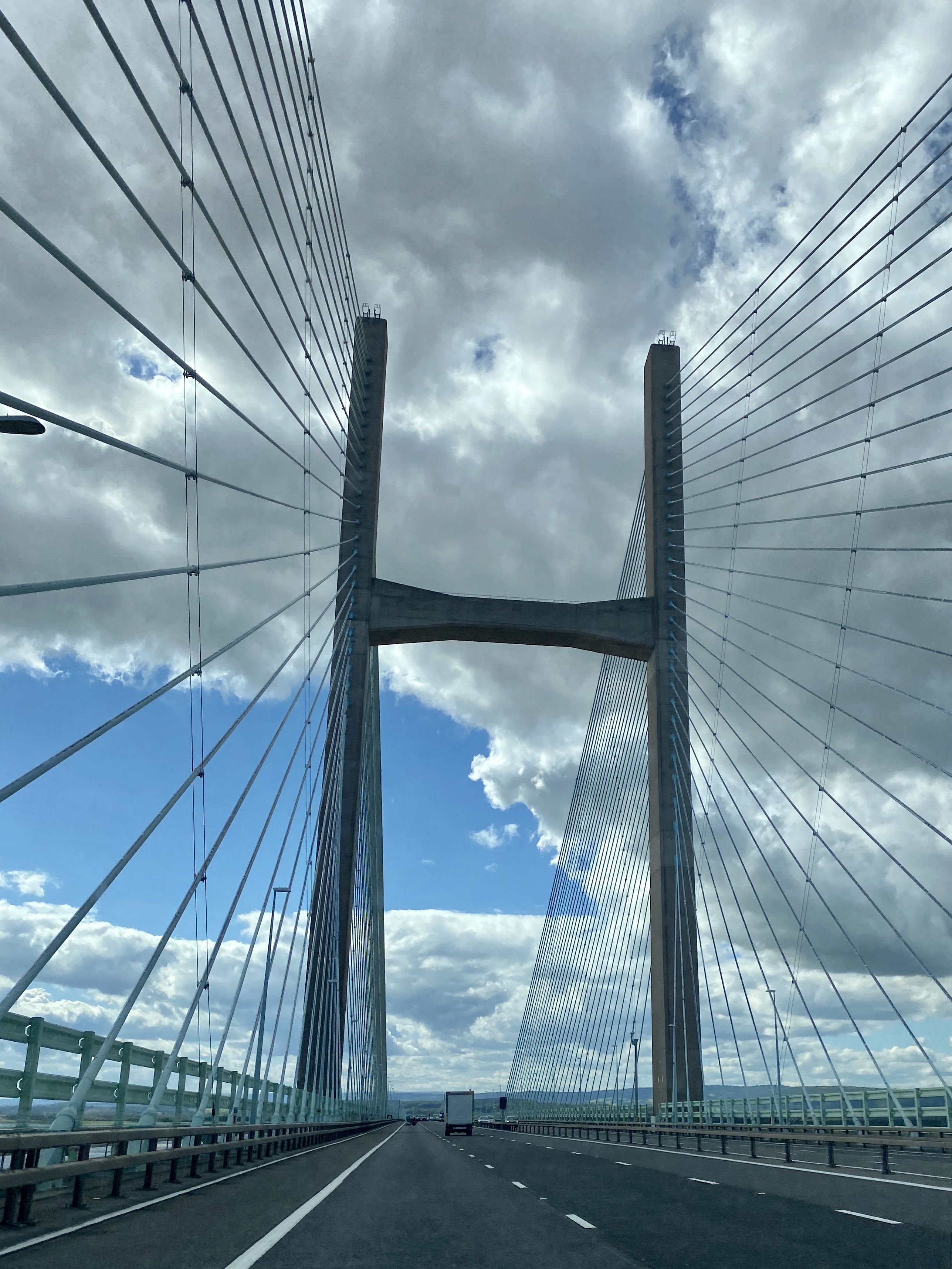 As a lot of families meeting up have found, it’s really hard for children to socially distance, and although my children and their cousins started out with space between them, it becomes impossible to maintain. I worry a lot about the impact lockdown has had on children – playing is so important to their development and happiness – and I guess you have to strike a balance between socially distancing and the impact on their mental health.

On Sunday, we headed again to the coast, this time avoiding the more popular touristy beaches in favour of Llantwit Major beach. Wanting to avoid the busiest times of the day, we didn’t get there until 3pm and stayed until around 6.30pm – we’d taken food with us so ate our tea on the beach. The tide was really far out, which meant there was plenty of space to socially distance. We had a little area in the rocks to ourselves and my children spent hours building sand castles, climbing in the rock pools, running into the sea and so on. The sense of space and freedom was again quite overwhelming after so long. The public toilets were open…and we used them once. I felt uncomfortable about this, but what can you do when you need to go? We had brought anti-bacterial hand gel and wipes with us. The loo situation is really difficult as we come out of lockdown and it’s definitely affected where we have been and how long we go for. My children are older now so it’s not quite so much of an issue… but I can imagine for younger children and for people with certain medical conditions this is a real worry and very limiting. 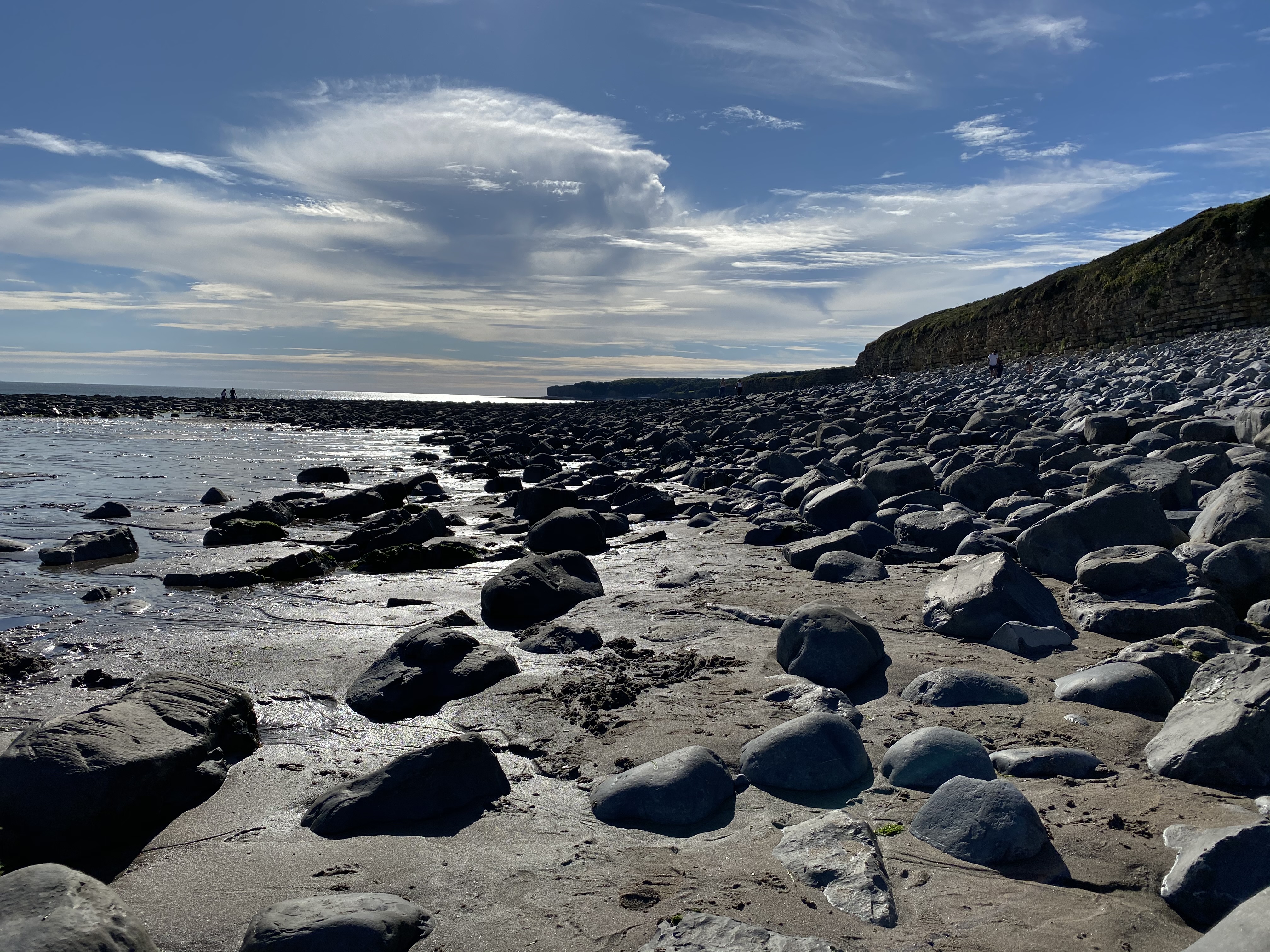 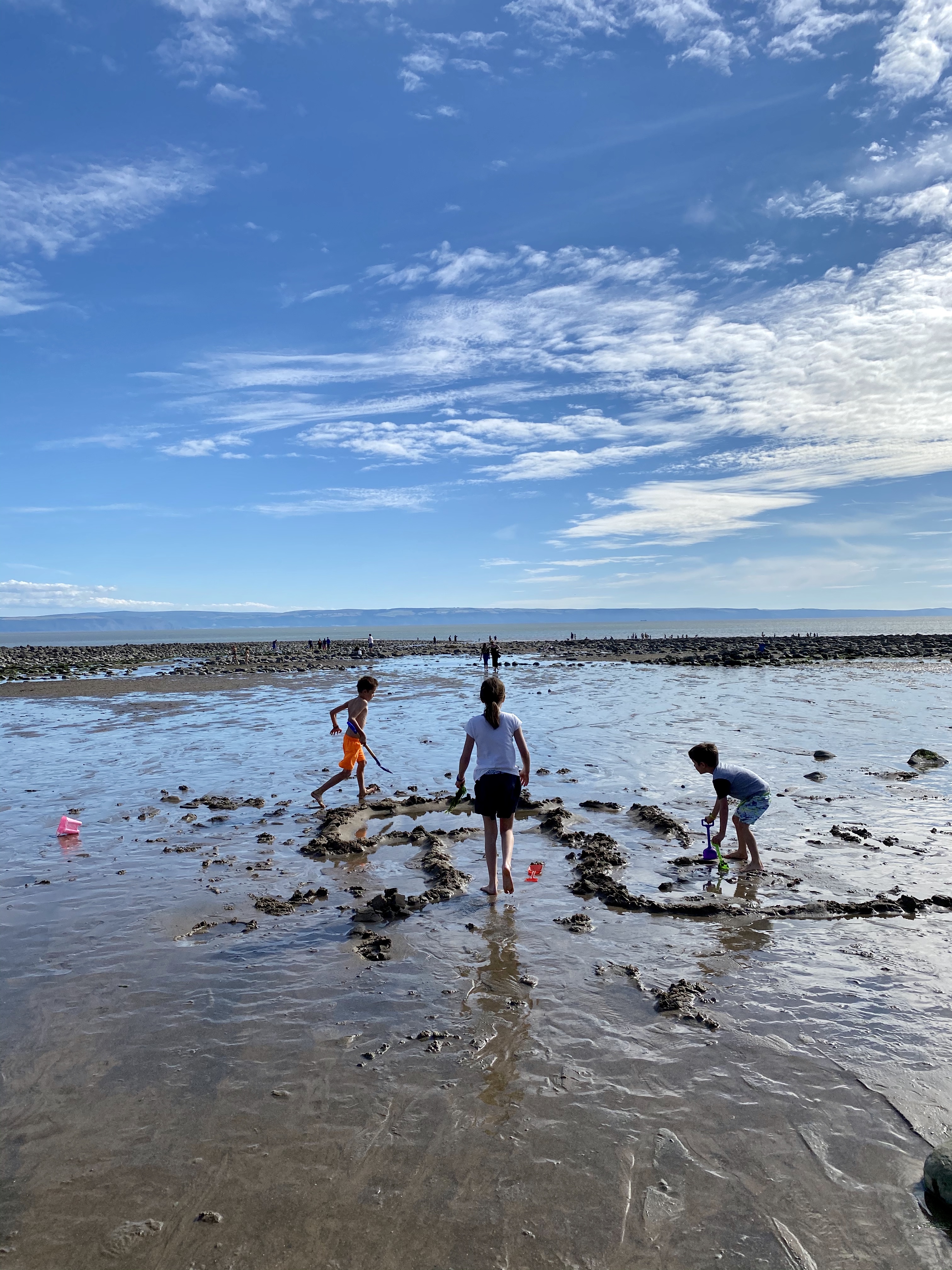 School has been the other blast of ‘new normality’ we have had recently too, with schools in Wales open to all year groups for the last three weeks of term (four weeks in some cases, but we won’t go into that whole debacle here). My children each had their one and only day at school the week before last. My eldest was super excited about it, so desperate to see her friends and to have a break from her brothers. She went in one day, followed by her brothers the next. The boys were a lot more nervous and apprehensive, which surprised me because they are generally confident and outgoing children. I wasn’t going to force it for the sake of one day, especially as it was more about catching up with their teachers and having fun than formal learning, but after seeing their teachers on the gates, they went in with a smile. There were just eight kids per class and no more than 50 in per day, so it was a very different kind of school. They were excited to see the friends they were in with but sad about the ones who were in on different days. The boys both enjoyed it. But the next day was so tough, with all kinds of emotions unleashed and tears and tantrums galore.

With just four more days of schooling at home, the summer holidays are in sight. It’ll be a rather different summer holiday this year, that’s for sure, but I’m grateful we can go a little further, and grateful attractions are starting to open, even if it’s not quite the full experience. We’ll still be sticking to the quieter, less touristy places as the idea of big crowds and being unable to keep a distance feels too overwhelming for me right now. We’ll continue to meet with friends, outdoors, and trying to maintain distance. The idea of restaurants, coffee shops, bars and pubs reopening feels uncomfortable for me at the moment, and we haven’t been to any non-essential shops yet but I’ll see how things progress. I do have a hair cut booked for next week, which I am in desperate need of but still feeling anxious about even though I know the salon has gone above and beyond to keep customers and staff safe with their new policies. 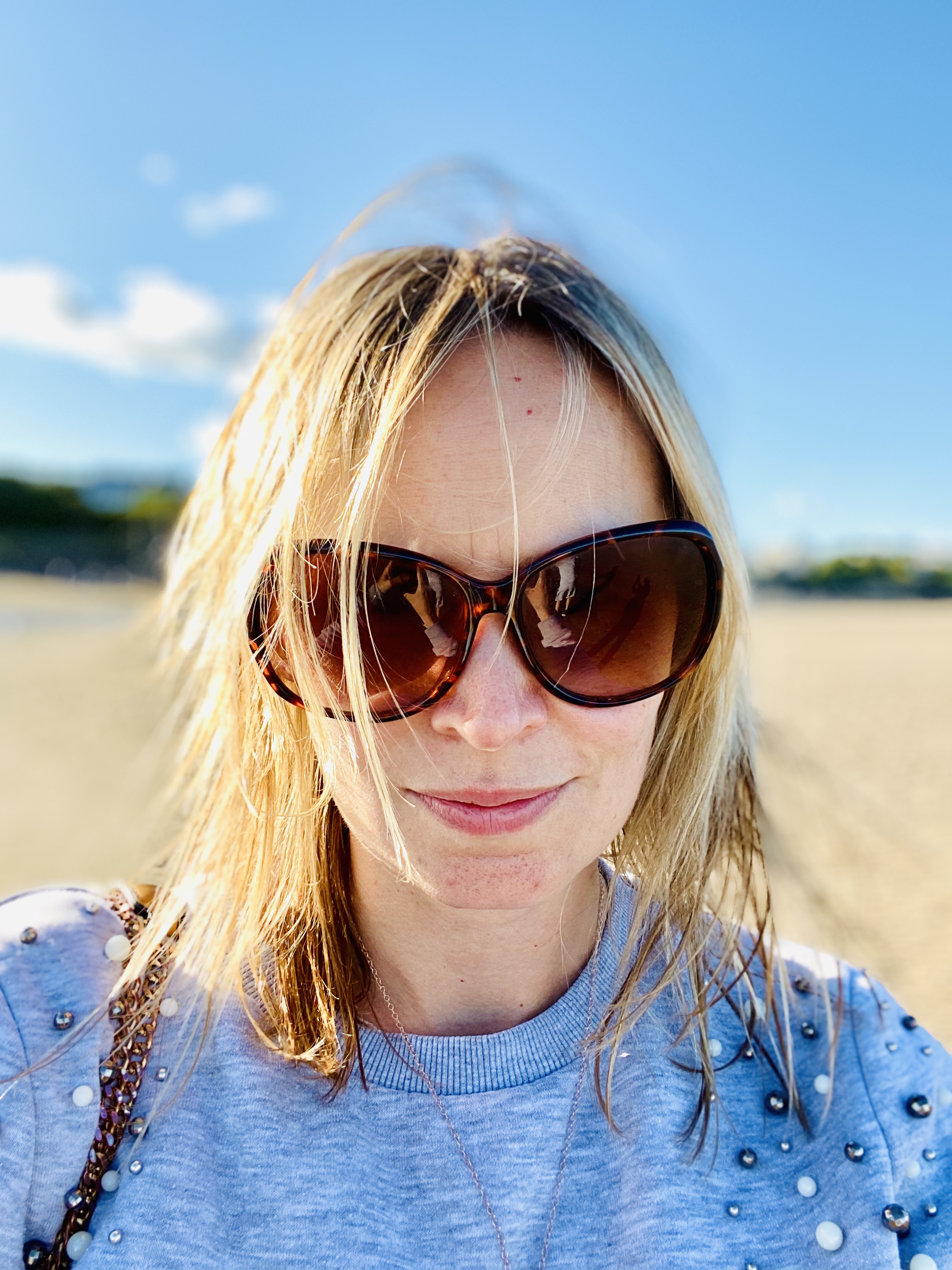 We thought long and hard about whether to take a summer holiday abroad this year. We were due to spend two weeks camping in Italy… one of the worst-hit countries in Europe. We came to the decision that we wouldn’t go this year because it wouldn’t be the holiday we were hoping for and we’d rather wait a year or two and be able to enjoy it as we intended. We’d cancelled the accommodation easily enough but were worried about the flights… and then, luckily for us, they were cancelled by the airline. We’re not quite sure why but it means we’ll get a full refund.

We’ve also had the news that all children will be back full-time in September and children won’t need to socially distance in their class bubbles. I have mixed feelings about it if I’m honest. The pressure on parents has been immense these last few months, education has suffered, as has children’s mental health. But the idea of full schools scares me a little. Perhaps I’d feel better if they were going back in smaller groups.

I guess we need to see how things are in seven weeks after a summer of restriction-lifting and international travel.

Because as we have seen so well this year, a lot can happen in a few short weeks.

How are you finding the easing of restrictions and getting back to a new kind of normal? Let me know in the comments below, on the Cardiff Mummy Says Facebook page, tweet me on @cardiffmummy or tag @cardiffmummysays on Instagram.