Cardiff Mummy Says is delighted to be working with CJCH Solicitors on an ongoing series of articles exploring legal matters relating to families. The series began last month with a look at how to appeal a school admissions decision if your child didn’t get into your first-choice school and over the next few months we’ll be producing informative guides on other issues affecting parents including wills and child custody.

This month Sally Perrett and Jodi Winter from CJCH’s Barry practice offer their expertise on where families of school-age children stand if they go on a term-time holiday.

Please note that while all articles will be written in good faith by legal experts using the latest laws in Wales and England each legal case is different and these articles are not a substitute for individual legal advice.

CJCH cannot comment in these articles on individual cases. However they are delighted to offer Cardiff Mummy Says readers a free initial ‘case validation’ assessment of your matter (T&C apply, assessment may take place in person, via telephone or email). If you’re unsure if your matter can be pursued then get in touch via email or telephone to provide the facts of your case, and the team will assess the matter free of charge and confirm if they are able to act for you. CJCH are also offering Cardiff Mummy Says readers a 10% discount on their legal services (excludes external costs such as court costs and third party services and fees). Just quote Cardiff Mummy when getting in touch. 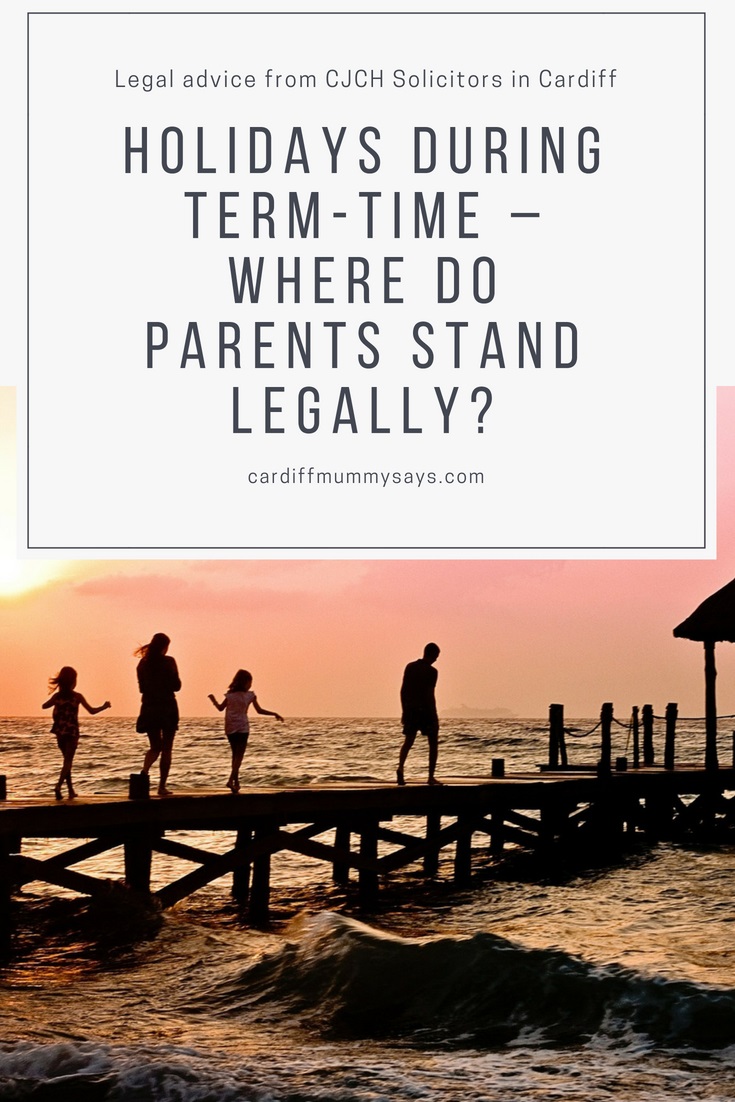 Given the rising cost of holidays during the school holidays, more parents are taking primary school children in Wales out of school for family holidays. However there has been recent confusion regarding where parents stand with potentially being ‘fined’ for removing their child from school during term time.

So, what is the legal position regarding taking your child out of school to go on holiday during term time?

Confusion has been caused as a result of the Supreme Court Ruling in Isle of Wight v Platt. Isle of Wight resident Jon Platt battled for two years against the fine he had received for taking his daughter out of school In April 2015 for a term time family holiday to Disney World without permission. The Local Authority issued a fix penalty notice (£60 fine) which Mr Plat failed to pay.

The Local Authority decided to pursue a prosecution. However, local magistrates found there was no case to answer because Mr Platt’s daughter had achieved a 95% attendance rate.

An appeal was brought by the Isle of Wight Council to the High Court who upheld the decision of the magistrates. The Department of Education and the Local Authority were unhappy with the decision and so appealed to the Supreme Court. The essential issue before the Supreme Court was what is the meaning of “fails to attend regularly” in section 444(1) of the Education Act 1996.

The Supreme Court (or in particular Lady Hale) went on to analyse the three identified possible meanings of the word “regularly” “at regular intervals”, “sufficiently frequently” and “in accordance with the attendance rules prescribed by the school”.  Lady Hale concluded, that in section 444(1) of the Education Act 1996, “regularly” means “in accordance with the rules prescribed by the school” and made a declaration to that effect.

Section 444(1) of the Education Act 1996 provides that if a child of compulsory school age fails to attend school regularly, the parents may be guilty of an offence and are liable to a fine. The case of Isle of Wight v Platt sought clarity on what constitutes regular attendance at school.

The Isle of Wight Council believed Mr Platt had committed an offence under Section 444(1) of the Education Act 1996. It issued a fixed penalty notice which Mr Platt refused to pay and consequently the Isle of Wight prosecuted Mr Platt under Section 444(1) of the Education Act 1996. If Mr Platt had simply paid the fine there would not have been a criminal prosecution.

Regulations in Wales provide head teachers with the discretionary powers to authorise leave for a family holiday where parents seek permission.

Schools have a discretionary power to authorise up to ten days absence during a school year for family holidays during term time if it is considered necessary.

Headteachers will have access to all the necessary information to make an informed decision. A headteacher is able to consider individual circumstances on a case by case basis. Various issues will be taken into account before reaching a decision, including the time of year, length of holiday, reason for the holiday, impact on learning, timing of exams or tests, family circumstances and the wishes of the parents, as well as the overall attendance and attainment of the child.

Will I have to pay a fine if I take my child on holiday during term time?

If the headteacher has given permission then the absence would be treated as authorised. If permission has not been sought or has not been given, the absence would be treated as unauthorised and would be referred to the Education department of the Local Authority in which the school is.  Local authorities issue fixed penalty notices on behalf of a school – based on available evidence and in accordance with the local authority’s Code of Conduct.

If the absence is unauthorised, will I be automatically issued a penalty notice?

The decision on whether to issue a fine rests with the local authority, often in consultation with the school. Every local authority in Wales has a Code of Conduct which sets out its own arrangements for issuing fixed penalty notices.

The Welsh Government fully supports the view that pupils need to be in school on every occasion they are required to be to reach their full potential. Each local authority will have details on issuing penalty notices in their area and as set out in their Code of Conduct. For further information about what the policy governing fixed penalty notices is in your area please contact your school or local authority.

The penalty is £60 and rises to £120 if paid after 21 days but within 28 days. There is no right of appeal against a Fixed Penalty Notice. If this is not paid, the Local Authority can proceed to prosecution or withdraw the notice.

If you were to receive a Fixed Penalty Notice and paid it in the required time you would not have a lasting criminal record, almost like a parking fine.

However, this isn’t licence to think “I’ll go on holiday every term and pay the fine”. The Local Authority could also prosecute parents for non-attendance without issuing a Fixed Penalty Notice if they believe that your child is not attending school regularly. This offence is dealt with at the Magistrates’ Court and could result in a Parenting Order being granted.

Therefore, the simple answer is always check with the school and ask permission before booking a holiday during term time. If your child’s attendance is generally good and the length of the holiday time is not unreasonable there would be no reason for your request to be refused.