One of my good friends had her first baby about five years before any of the rest of us had children. There were many things I didn’t understand about her life, as her priorities changed but mine didn’t. She talked about weaning and nappies and sleep patterns. I tried to understand, but in hindsight, I really didn’t.

One thing that sticks in my mind about how different our lives were is a conversation we had in the pub, when she’d been a mum for about two years. I’d complimented her on the gorgeous outfit she was wearing and on her beautiful make-up – she really did look lovely – and then I remarked that I was surprised to see her wearing flat shoes.

“When you’re a mum, you don’t really wear heels,” she said. I smiled at her, but deep down I was thinking, “That’s ridiculous! Why on earth would you stop wearing heels just because you have children? That will never, ever happen to me.” 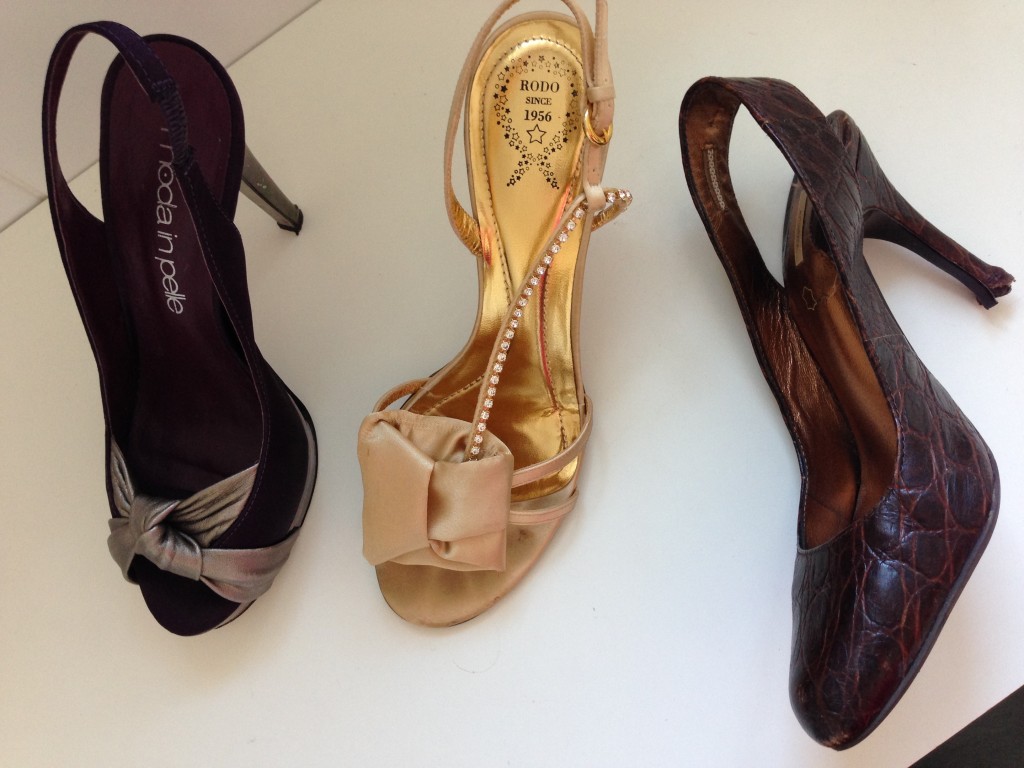 I was so naïve thinking having children wouldn’t change the kind of shoes I wear.

I love heels, I really do. They make me feel confident and sexy and tall (which is important when you are five foot nothing). Some shoes are so darn beautiful they make me want to cry. But. BUT. I have become the mum who owns sensible shoes. Multiple pairs of sensible shoes.

I have flat shoes with ankle straps! I have shoes with small heels! I have flat boots with grips on the bottom and a fur lining. I have daps. DAPS, I tell you! (That’s what we in South Wales call pumps.)

How did this happen to me? I was the girl who never wore flats. I could dance all night in heels. I could walk a mile and a half to work in stiletto boots. In fact, on one occasion when I changed into my trainers to go to the gym straight from work (rather than waiting to get to the gym to change as I usually did), my colleague asked me in all seriousness if I had shrunk. I simply didn’t do flats in public.

And then I got pregnant. I’d read all the advice about not wearing heels during pregnancy, but I didn’t want anyone to know I was pregnant so I kept my heels on. And then suddenly, my growing bump meant my centre of balance had shifted and I didn’t feel safe in my heels any more. I put on flats. It was only a short-term thing, I told myself. For the safety of myself and my baby, I told myself.

But then Little Miss E was born in the middle of an icy and snowy winter and the idea of being responsible for a tiny and precious life in shoes that might cause me, and therefore her, to slip and slide all over the place, meant the flats stayed. It’ll be fine in the spring, I told myself. But it wasn’t. Walking long distances with a buggy was difficult in heels. Playing in the park and at mother-and-baby groups was difficult in heels. I didn’t want to be the mum tottering along on the sidelines, her stilettos getting stuck in the grass at the park. I wanted to be the mum running around and having fun with her child. Gradually, my shoes were replaced with flats and before I knew it, I had gone several months without wearing any kind of decent heel.

And suddenly my baby was nine months old and it was time for a good friend’s hen do. I put my heels on without even thinking about it. Not just any old heels; my biggest most gorgeous heels that I hadn’t worn for over a year and couldn’t wait to get reacquainted with. What a stupid mistake that was. Wearing heels is not like riding a bike. You forget. Your feet forget. Especially if you’re not drinking because you’re breast-feeding. I was almost crying after about an hour as my poor feet were in such pain.

I soon bought a new pair of going out shoes with a mid-size heel. I bought a pair of mid-size wedges. I would never have looked at these previously.

I’m not saying I have abandoned heels for good. I wear them if I know I can sit down most of the night, or if I don’t have to walk to my destination. But with three kids of five and under, I definitely don’t wear them in the day any more.

About a month ago, I bought my most sensible shoe purchase to date. I needed a decent pair of boots for the school run. With Little Miss E in reception, and Little Man O in the school’s nursery unit every afternoon, I have three school runs a day. It’s a mile each way, meaning some days I walk six miles with a buggy  laden with school bags, lunch boxes, PE kits, and a baby change bag. You just can’t do that in heels. I had a pair of slouchy boots that looked sensible but were anything but due to their thin, slippery sole and lack of ankle support, and they were slowly getting destroyed.

I had been looking for a decent pair of boots for about four months. They needed to be sturdy enough for my big walk and the Welsh weather, but I also wanted something that wasn’t totally ugly; that still had an element of style about them. It took me forever to find a pair, not helped by the fact that my narrow calves make boot shopping difficult as boots just gape on me.

Finally, I found a pair that were just about passable. They were £120, which was way more than I wanted to pay, but Cardiff Daddy told me the shoe situation was getting ridiculous, that I’d been looking for months, and that I needed to buy something before I did my feet some serious damage. 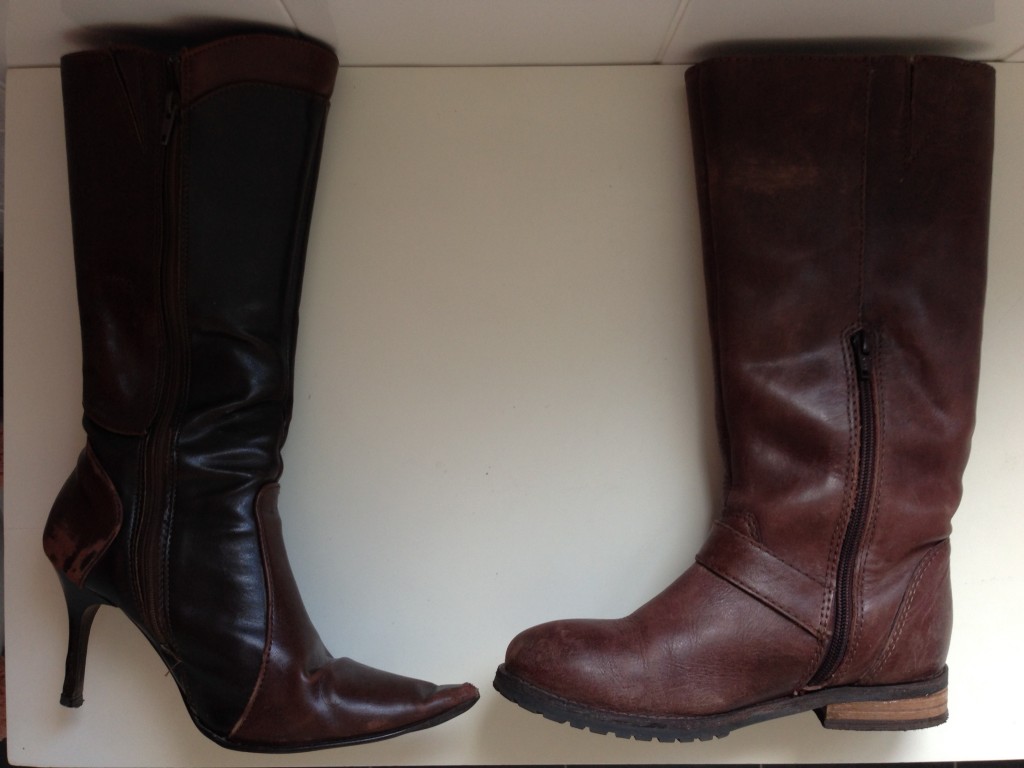 When I got to the counter, they flashed up as £39. They weren’t marked as reduced so the sales girl got another member of staff to double check. Yep. They were £39. A third of the marked price! I was thrilled that my boots were so heavily discounted as I hadn’t wanted to spend that much in the first place. But then I panicked that the reason they were so reduced was because they were ugly and no one liked them.

Cardiff Daddy reassured me that they weren’t ugly; they weren’t overly sensible; they were just perfect for a mum of three on the school run. Ever the voice of reason, he then asked me what I was going to wear for the school run in the summer. “Ummm, flip flops?!” I suggested. “Not if you’re walking six miles a day,” he said. Given how much money we’d unexpectedly saved on the mummy boots, he suggested I buy myself a pair of Converse pumps. “I am becoming the people I used to laugh at,” one half of my brain was saying. “Ooooh, these are so comfortable,” the other side of my brain replied. 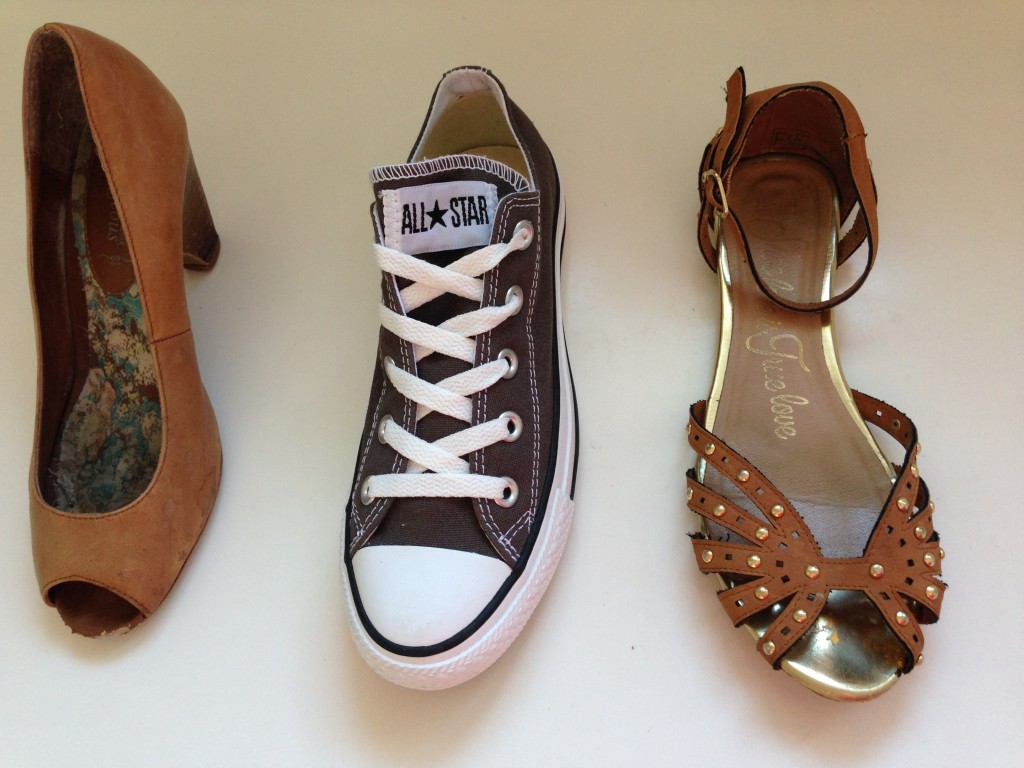 I never thought it would happen, but I own small heels. I own pumps. And I own flats with ankle straps!

And so I became the woman who bought two pairs of practical and sensible shoes in the space of half an hour. My friend’s words echoed in my head. “When you’re a mum, you don’t really wear heels.” Well, I’ll never give them up entirely, and I can’t ever imagine wearing flats on a night out. But, as I said, I don’t want to be the mum unable to run with her children in the park because she’s wearing inappropriate shoes. I certainly don’t want to be the mum who slips and twists her ankle on the school run because she’s more concerned with how she looks than her own safety, and that of her children. And so, for the next few years, I am the mum who doesn’t really wear heels – and I no longer have a problem with it.

Has your shoe choice changed since having children? Have you traded heels for flats now you’re a mummy? Please tell me I’m not alone in trading in heels for flats. You can tweet me on @cardiffmummy or join in the discussion on the Cardiff Mummy Says Facebook page.

Homepage » Family life » Have you traded heels for flats now you’re a mummy?

8 Comments to Have you traded heels for flats now you’re a mummy?