Jane Austen is Bath’s most famous resident (with the wonderful queen of baking Mary Berry coming a close second in my eyes!). The much-loved author paid two long visits to the city towards the end of the 18th century and lived there from 1801 to 1806. Two of her most famous works, Northanger Abbey and Persuasion, are set in Bath and the city features in other novels as well as the collection of letters she wrote to her sister, Cassandra.

Even now in the 21st century you can’t help but feel as Jane must have felt when walking around the city. The distinctive limestone townhouses crescents and squares instantly transported me back to the past. I wouldn’t have been at all surprised if ladies in long regency dresses and bonnets and gloves or gentlemen with tailcoats white shirts and cravats started walking down the streets towards me.

Bath celebrates its connection with Jane Austen at the Jane Austen Centre, an informative and engaging museum celebrating her life and works and one of the city’s most popular attractions.

The Jane Austen Centre – an informative and engaging museum 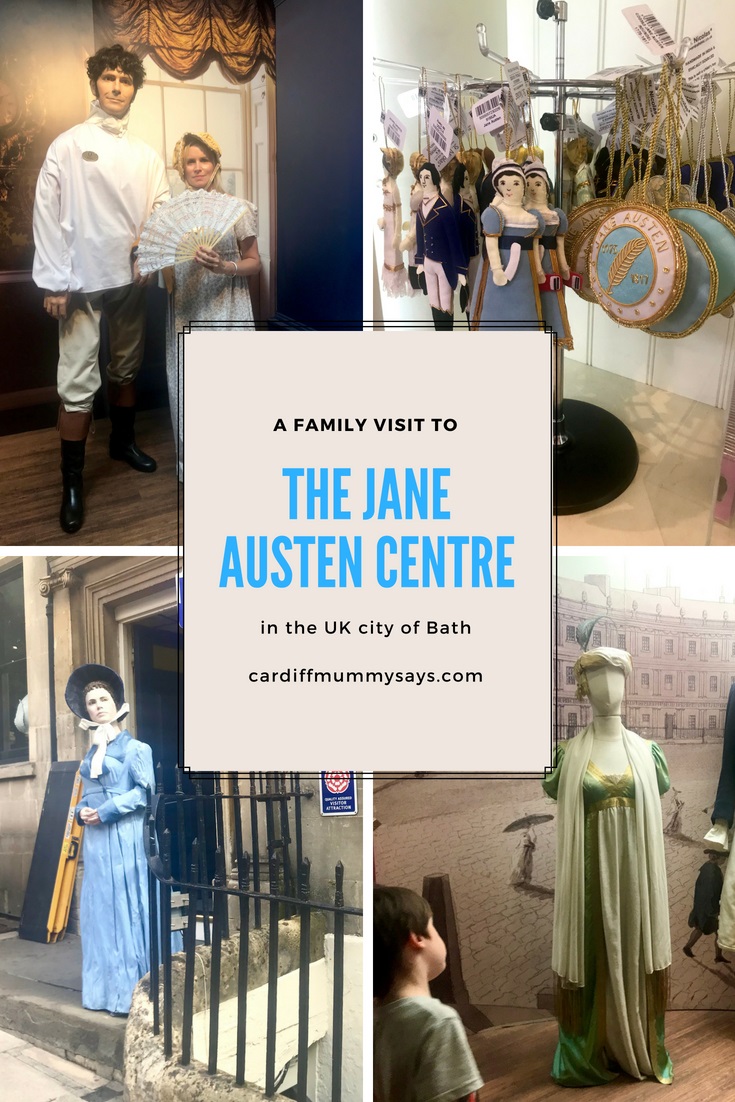 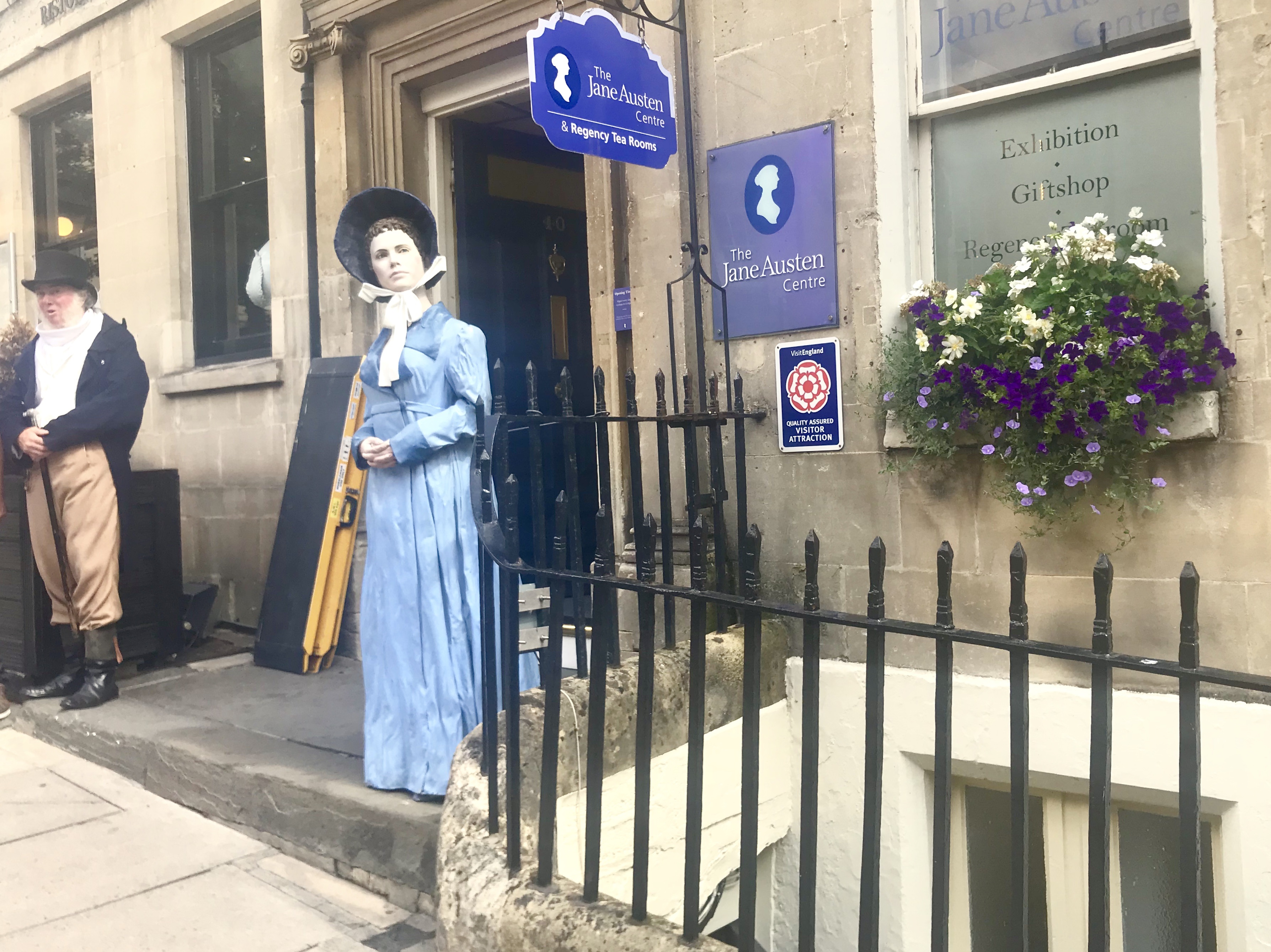 My children are eight, six and four and didn’t know much about Jane Austen so I wasn’t sure what they would make of the Jane Austen Centre on our recent three-day family trip to the city (a paid collaboration with National Express and in association with Visit Bath).

However I love her books and the film and TV adaptations. It was somewhere I really wanted to visit so I decided to introduce to the little people in my life to this wonderful literary icon and give it a go. It’s a small exhibition but it packs a lot in and thankfully there were lots of interactive elements that kept my children engaged.

As soon as you arrive you are swept into the mood of things with all the staff dressed as characters from Jane’s various books and wearing name badges. They were completely in character and all of them really friendly to my children. 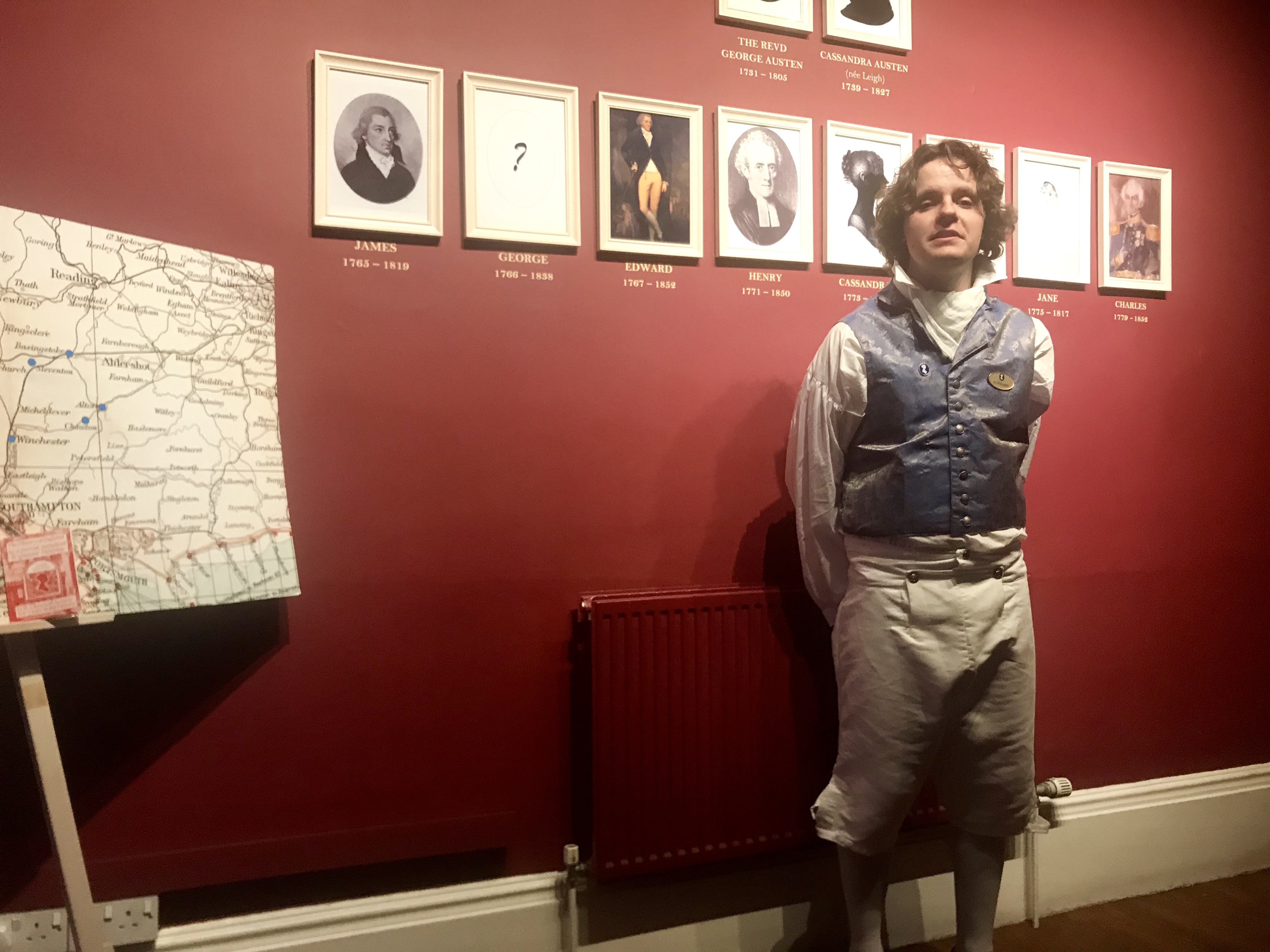 The centre is located in one of the three-storey town houses on Gay Street – an iconic Bath address which links two famous locations Queen Square to The Circus. The area was designed by the celebrated architects John Wood the Elder and completed by his son John Wood the Younger. Jane herself once lived on Gay Street (named after Robert Gay the MP for Bath who leased the land to the elder Wood). The centre is at number 40, although Jane actually lived at 25. But you still get a wonderful sense of what her life must have been like on this beautiful street.

The visit begins with a video about Jane’s life and her connection to Bath. “Mr Willougby” from Sense and Sensibility then gave us a 10-minute talk about her life, family and early literary influences. We then learn about different portraits which may or may not be of Jane before being free to explore the rest of the museum. 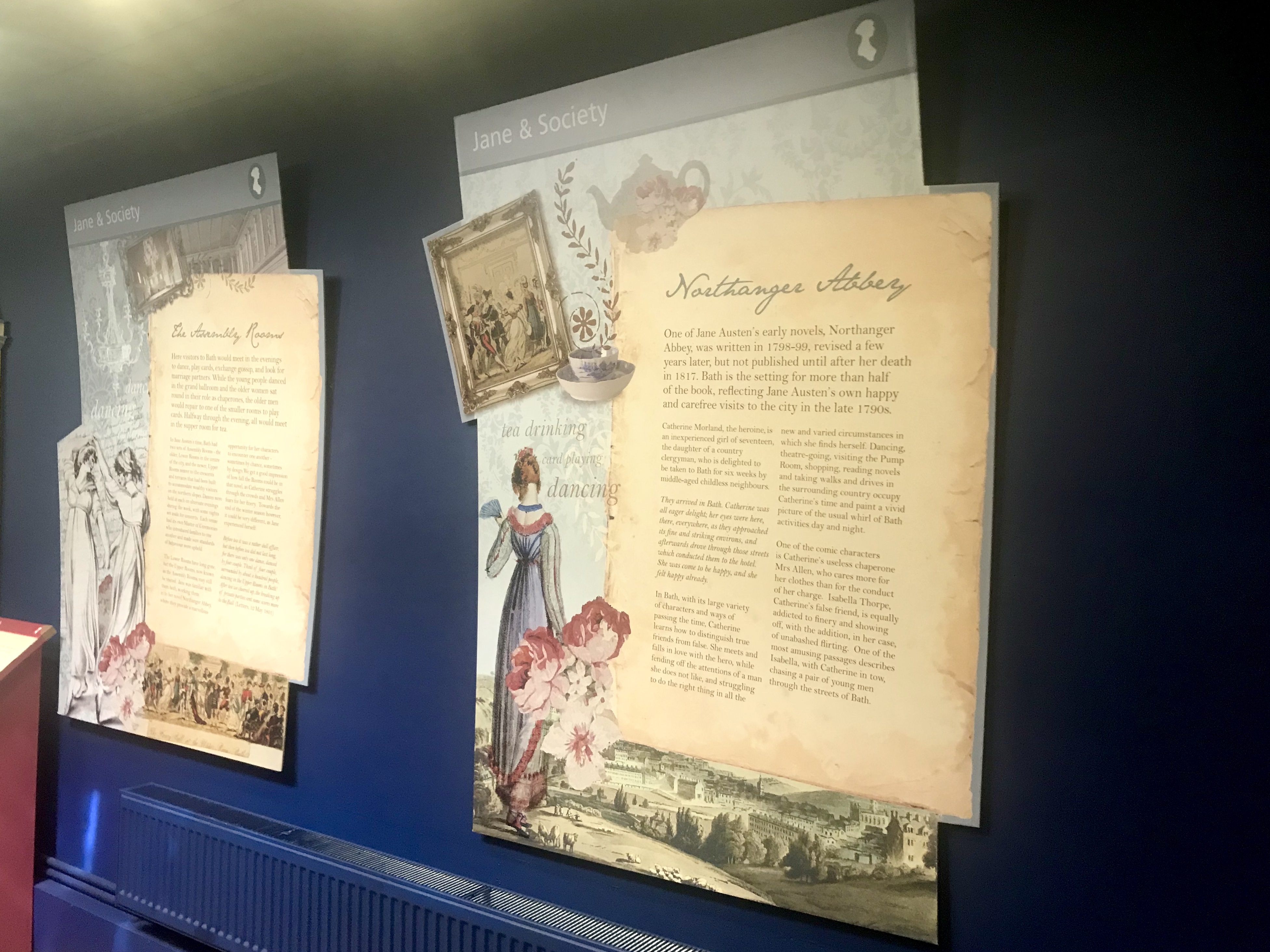 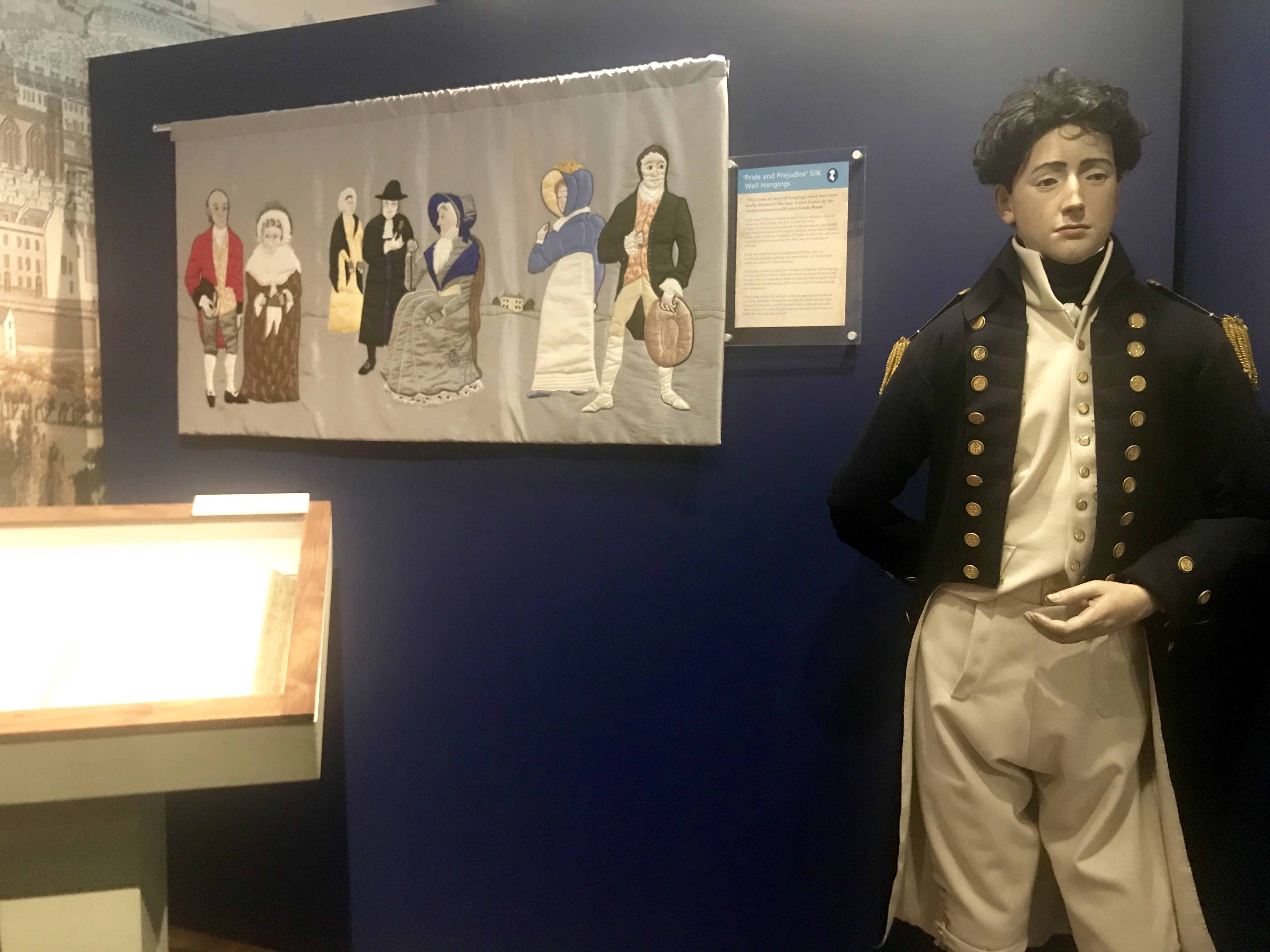 Large and clear information boards detail her life and her works accompanied by beautiful images. There are period costumes and images of Bath. Visitors can dress up and have their photo taken with a life-size Mr Darcy waxwork.

We got to try biscuits popular at the time and my children loved trying to write with a feather quill and play games popular in the era. For children who can’t read there is plenty to see that will help them understand the era. 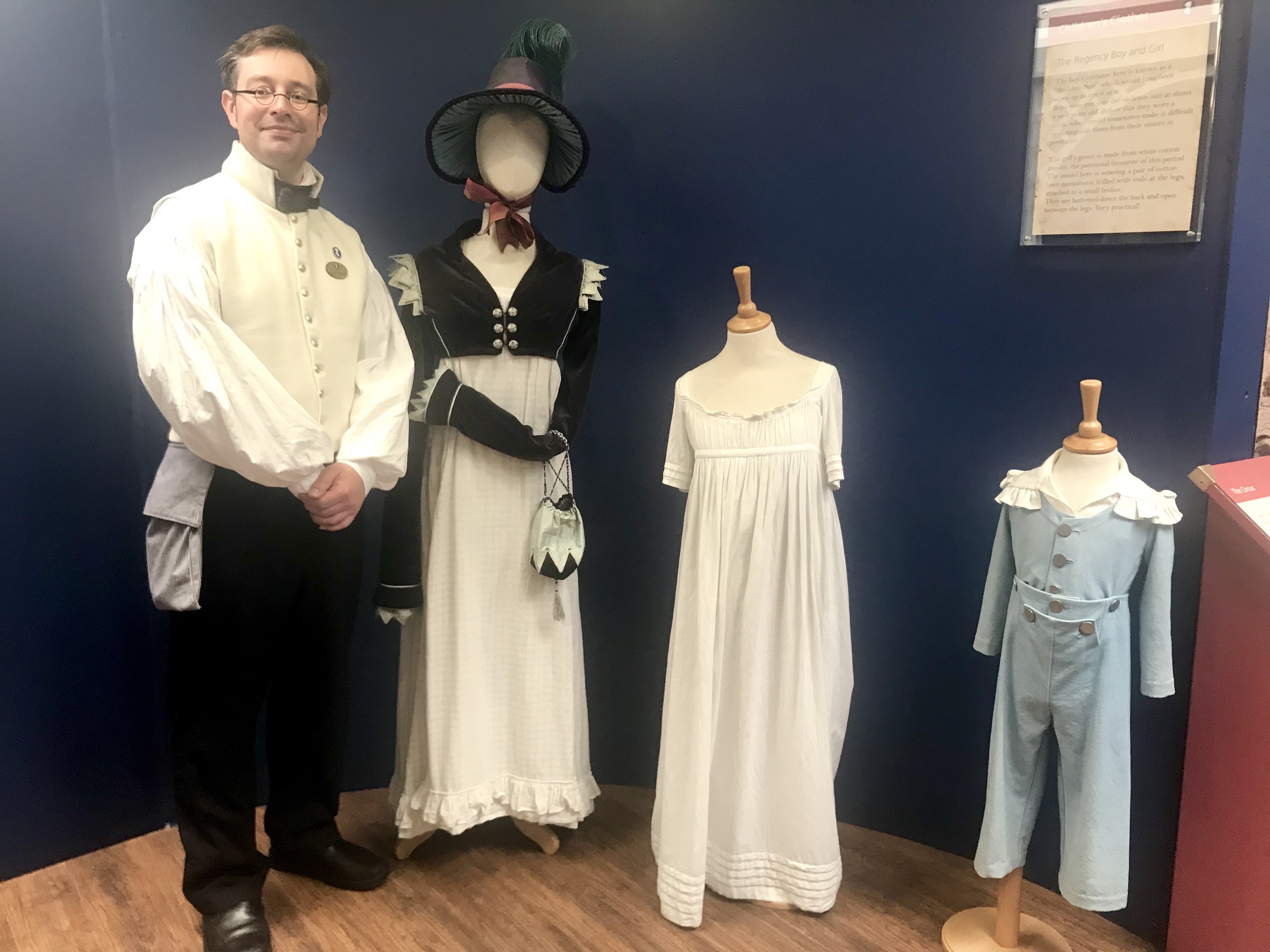 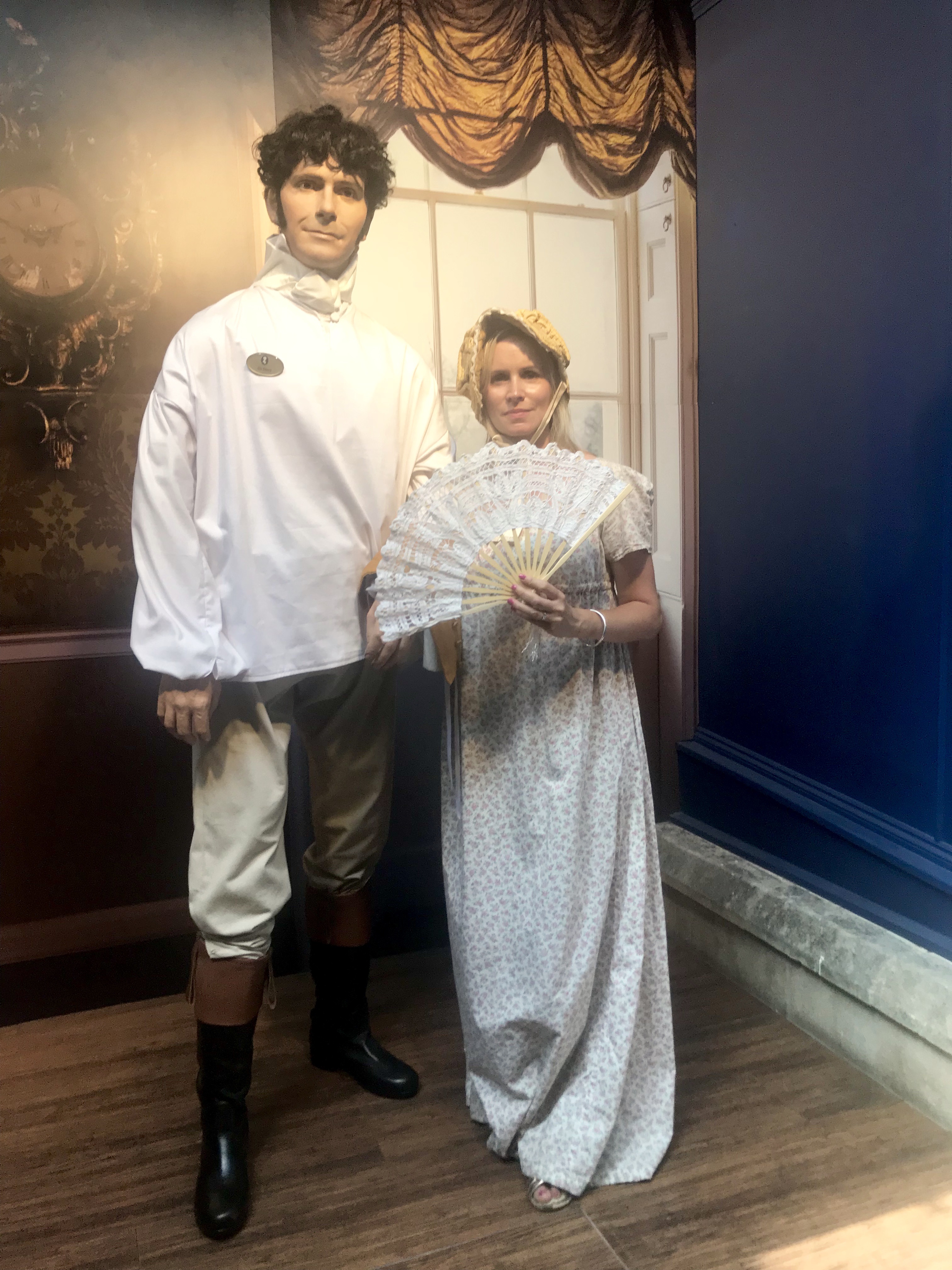 There’s also a life-size waxwork of Jane which was developed from a forensic portrait of the author. The story behind the figure is really interesting – there’s only one verifiable portrait of Jane in existence which was painted by her sister Cassandra but deemed by family to be a poor likeness. 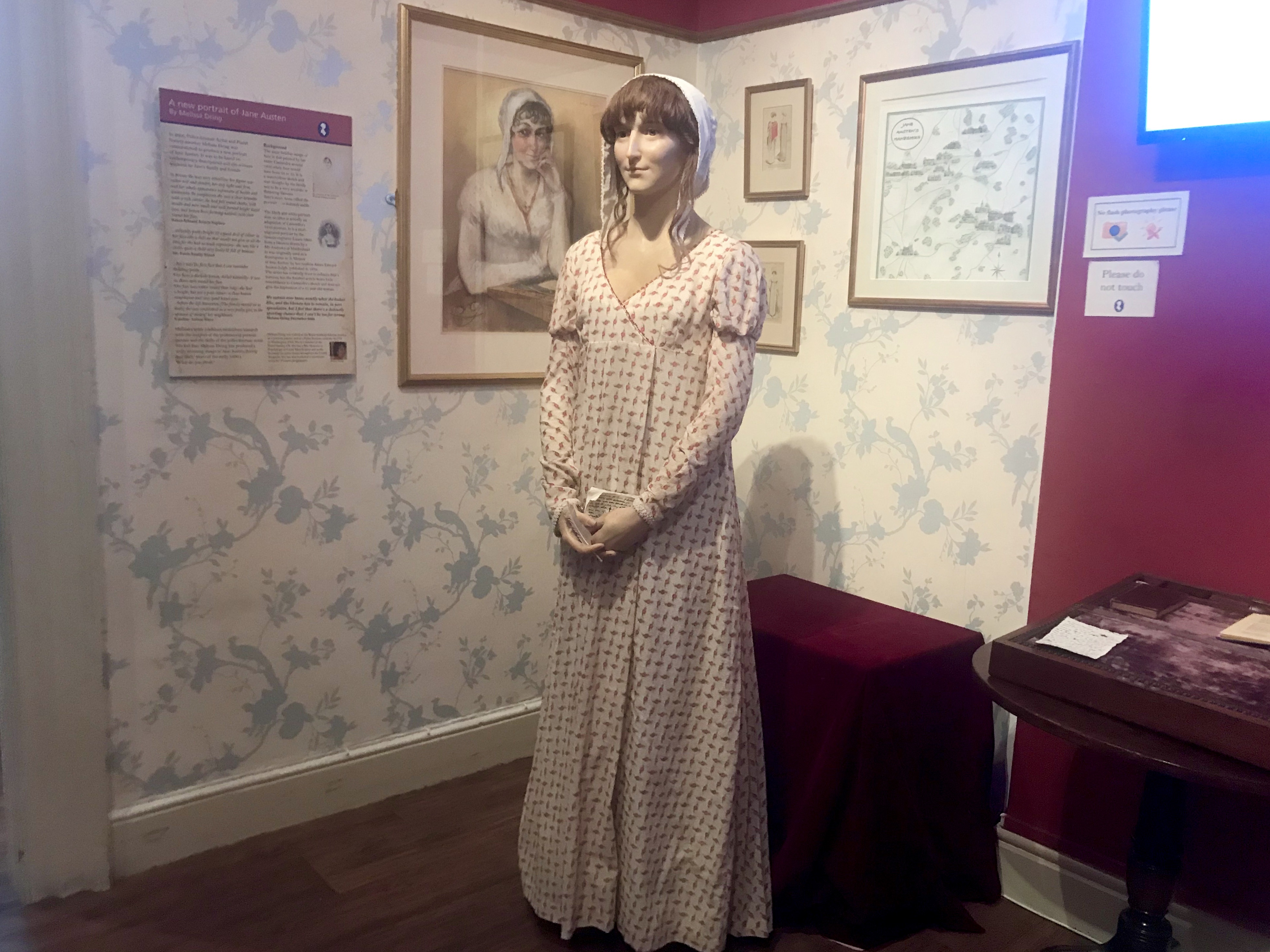 The waxwork is based on a portrait by forensic artist Melissa Dring, commissioned by the centre and based on descriptions of Jane by her friends. The waxwork was created by internationally-renowned portrait sculptor Mark Richards and dressed in authentic-period costume by Bafta & Emmy award-winning designer Andrea Galer, with finishing touches completed by ex-Madame Tussaud’s hair and colour artist Nell Clarke. It’s quite striking and it felt a real privilege to be able to take a photo next to Jane. 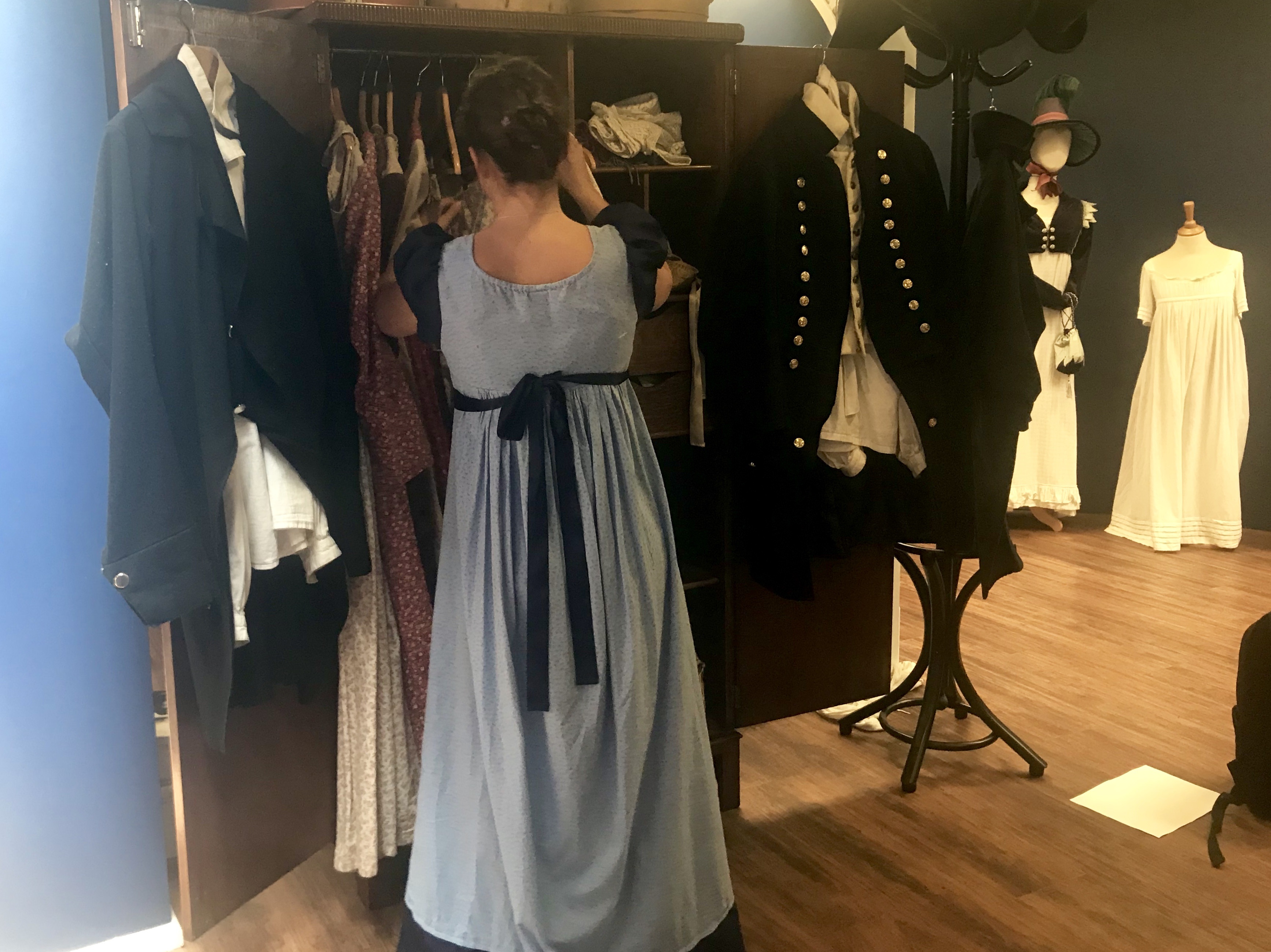 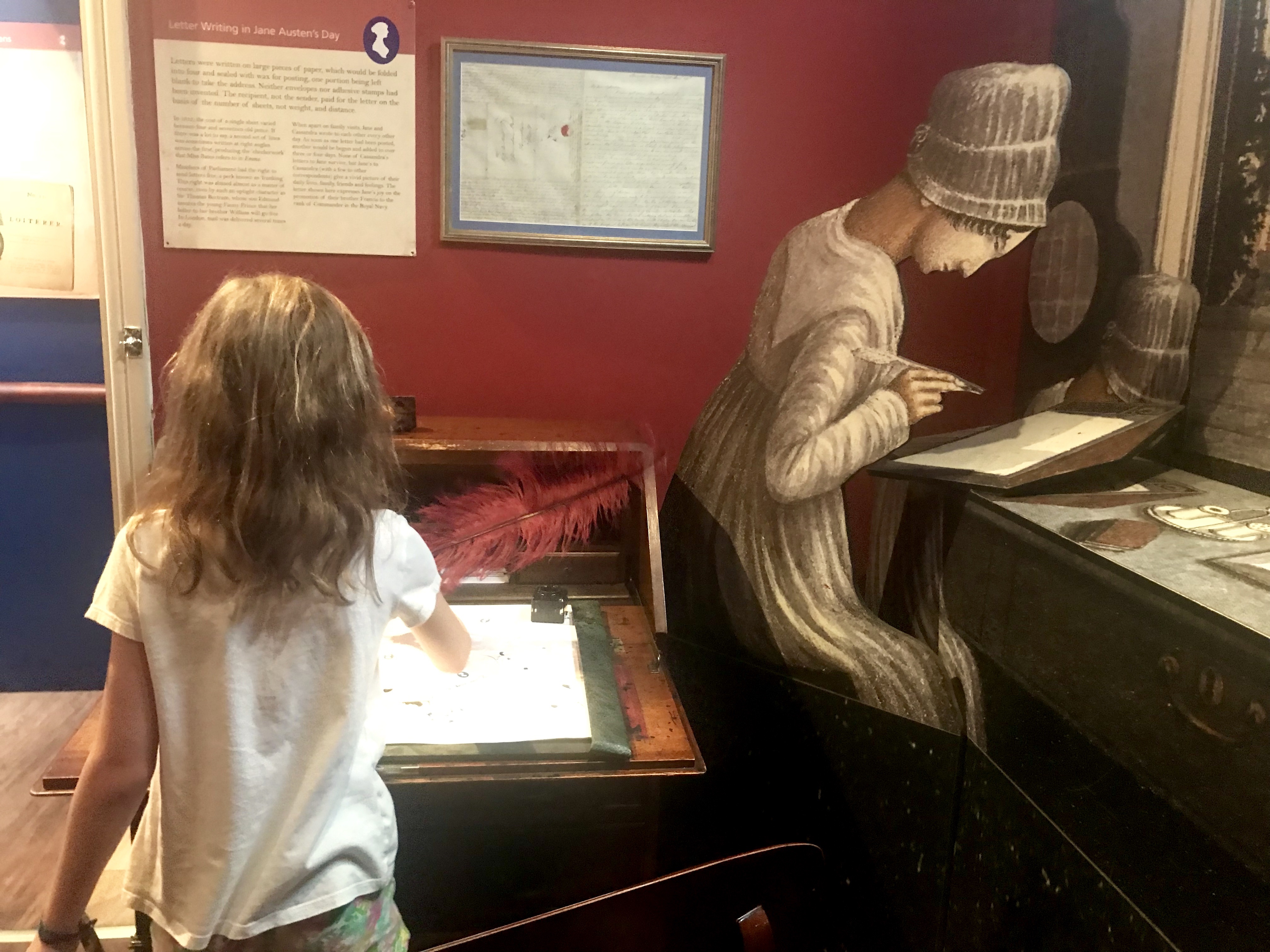 Little touches will appeal to Austen fans. Even the toilets had signs for Mr Darcy and Lizzie Bennett rather than the usual male and female. The gift shop is a real treasure trove with different versions of all her books, badges, postcards, aprons, mugs, even Jane Austen playing cards, and so much more (you can see a larger selection online). My eight year old daughter is a real bookworm and was keen to learn more about Jane’s novels so we bought her an abridged children’s version of Pride and Prejudice which she devoured within a day. She’s already planning on buying some more. 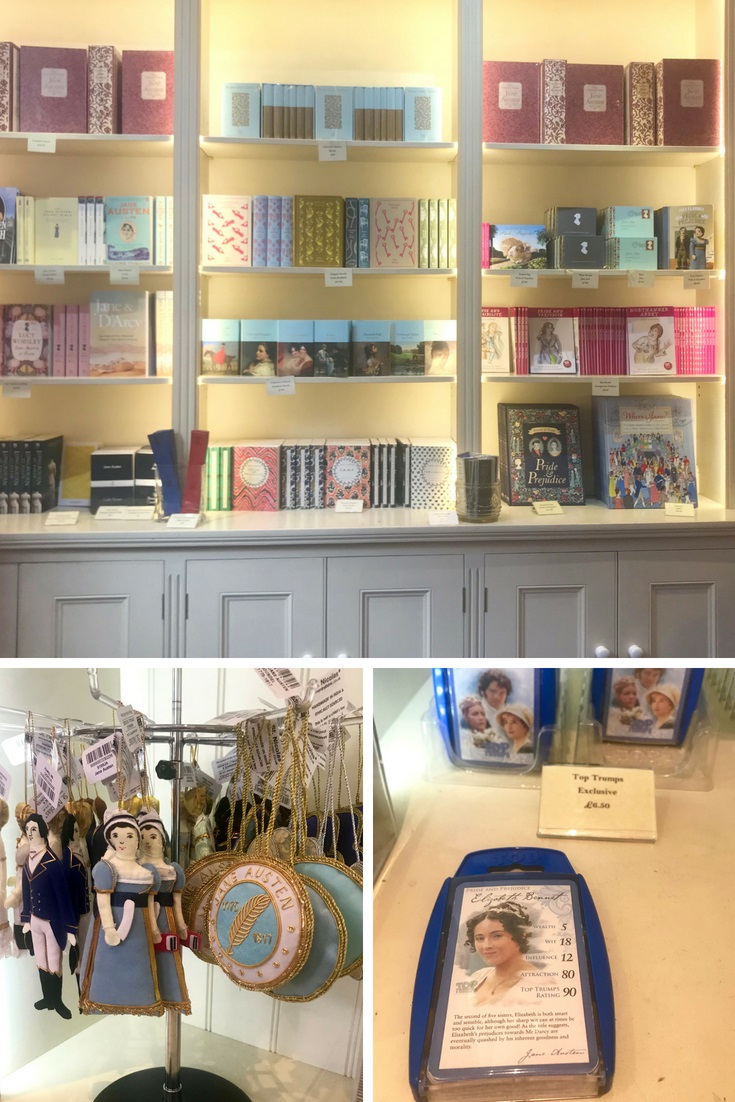 We were in the museum for over an hour, although those without young and energetic children will probably spend longer. Upstairs is the Regency Tea Rooms which offers afternoon and cream teas, a champagne afternoon tea, light lunches, cakes and drinks. I didn’t think it was best suited for my children but it would be perfect for a visit with friends.

The centre also hosts the annual Jane Austen Festival with over 80 events including the Grand Regency Costumed Parade through the city and the Regency Costumed Masked Ball with its drinks reception around the Roman Baths and dancing in the historic Pump Rooms. For groups, the centre can arrange guided walking tours of Jane’s Bath.

Individuals can also book a place here for walking tours that show where Jane lived, walked and visited (11am every Saturday, Sunday and Bank Holidays. Adults £4.50 Concessions £3.50).

Austen fans can also take a free walking tour of the city with a downloadable tour and PDF map available here. The tour focuses on Jane’s life in Bath, taking in the city’s highlights and including extracts from Jane Austen’s novels and letters, which describe Bath as it would have been in its Georgian heyday.

The nature of the building means that wheelchair access is only on the first floor and it would be very difficult to visit with a buggy.

You can read more about our three day family trip to Bath here.