Cardiff Daddy and I met on the Mumbles. It was late September 1997 and both of us were students at Swansea University. The Mumbles Mile was the place to be on a Saturday night as students and locals alike went from pub to pub along the infamous strip, the idea being to have a drink in each.

The Knab Rock (named after the nearby sand and shingle beach) with its cheesy pop music and dance floor sticky from spilled drinks was always my favourite and it was here that I met the man who would one day become my husband. I’d love to tell you it was love at first sight as our eyes met across a crowded dance floor…. but it was nothing of the sort. His friend was chatting up my friend and we ended up having to talk to each other by default. I thought nothing of it, to tell the truth. We’d see each other around from time to time and would always have a chat if we bumped into each other on campus or in one of the many student pubs. But we didn’t get together until a year and a half later.

Fast forward 20 and a half years from that first chance meeting, and 19 and a quarter years since we became a couple, and we were delighted to be invited back to the seaside town to enjoy a family day out courtesy of Mumbles Pier. We always love going back to Swansea because it was such a huge part of our lives but haven’t been as a family since our youngest was a baby and he’s now four so it was about time for a return trip.

Scroll on to read more plus watch our video here. 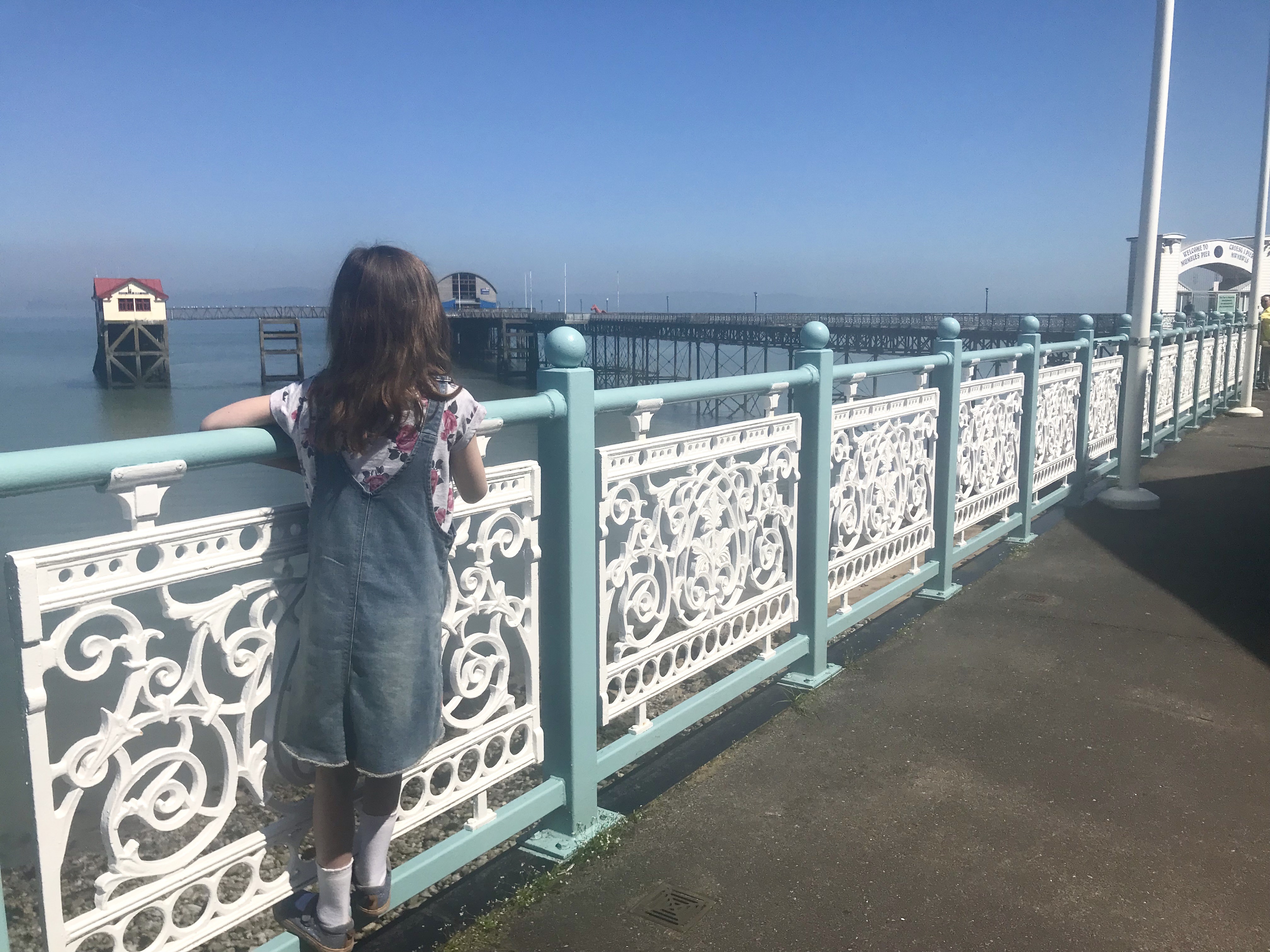 A lot has changed in Mumbles since our student days. Many of the pubs have gone, replaced by restaurants and boutiques. Mumbles itself was named as the best place to live in Wales by The Sunday Times with its judges saying, “It was a bit run-down at the turn of the millennium but has just had a serious makeover.

“The area around the pier has been given a multi-million-pound face-lift, the Tivoli arcade has been transformed into a parade of high-end restaurants and fashion shops, the British Legion is becoming an M&S and the rugby club has been rebranded as Bar 1887.”

The 120-year-old pier is undergoing a £3.2 million reconstruction which will see additional decking to widen it as well as essential restoration. When we visited, construction crews were already on site removing period Victorian features for storage and refurbishment, ahead of partial demolition. 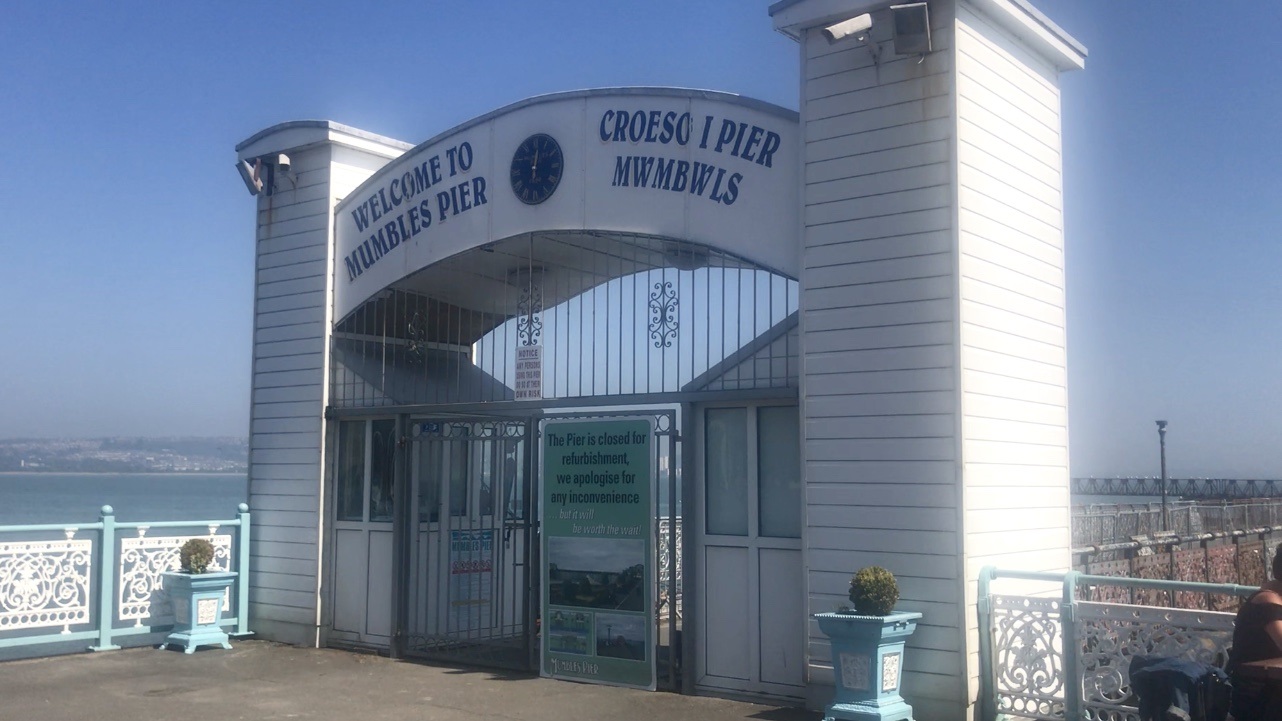 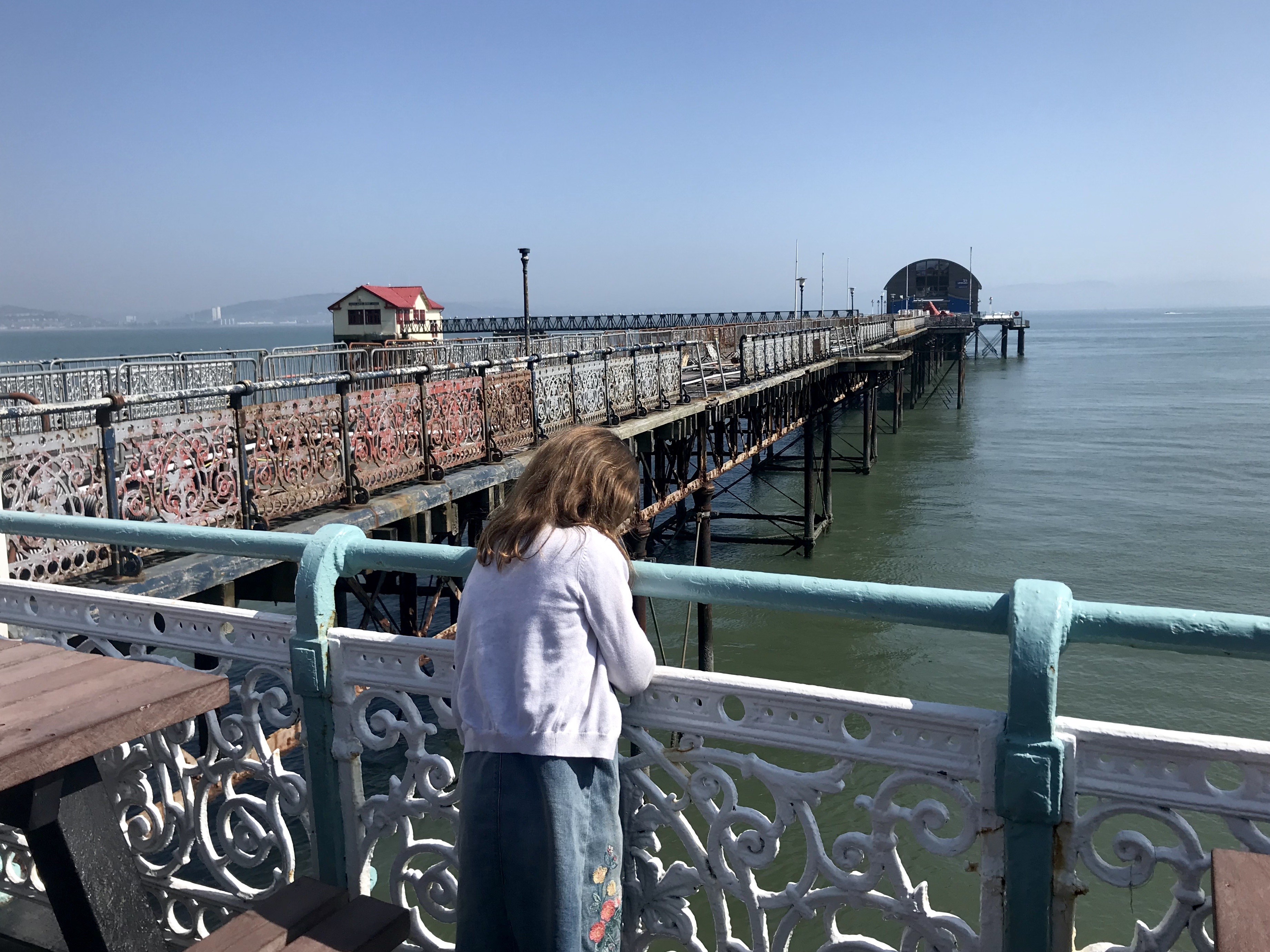 Plans have also been submitted for a headland development, which would include a small hotel and holiday apartments as well as an extended seawall, a new boardwalk between the pier and Knab Rock, new sculptures and a 61-space car park.

It’s an exciting time for Mumbles and although the pier is currently not currently accessible to visitors, it’s business as usual at the entertainment and dining facilities surrounding it and we were excited to put them to the test.

We arrived bright and early on a Sunday morning earlier this month. When we left Cardiff an hour earlier the skies were blue and the sun was shining but when we got to Mumbles there was an eerie mist across the sea and the pier was barely visible. 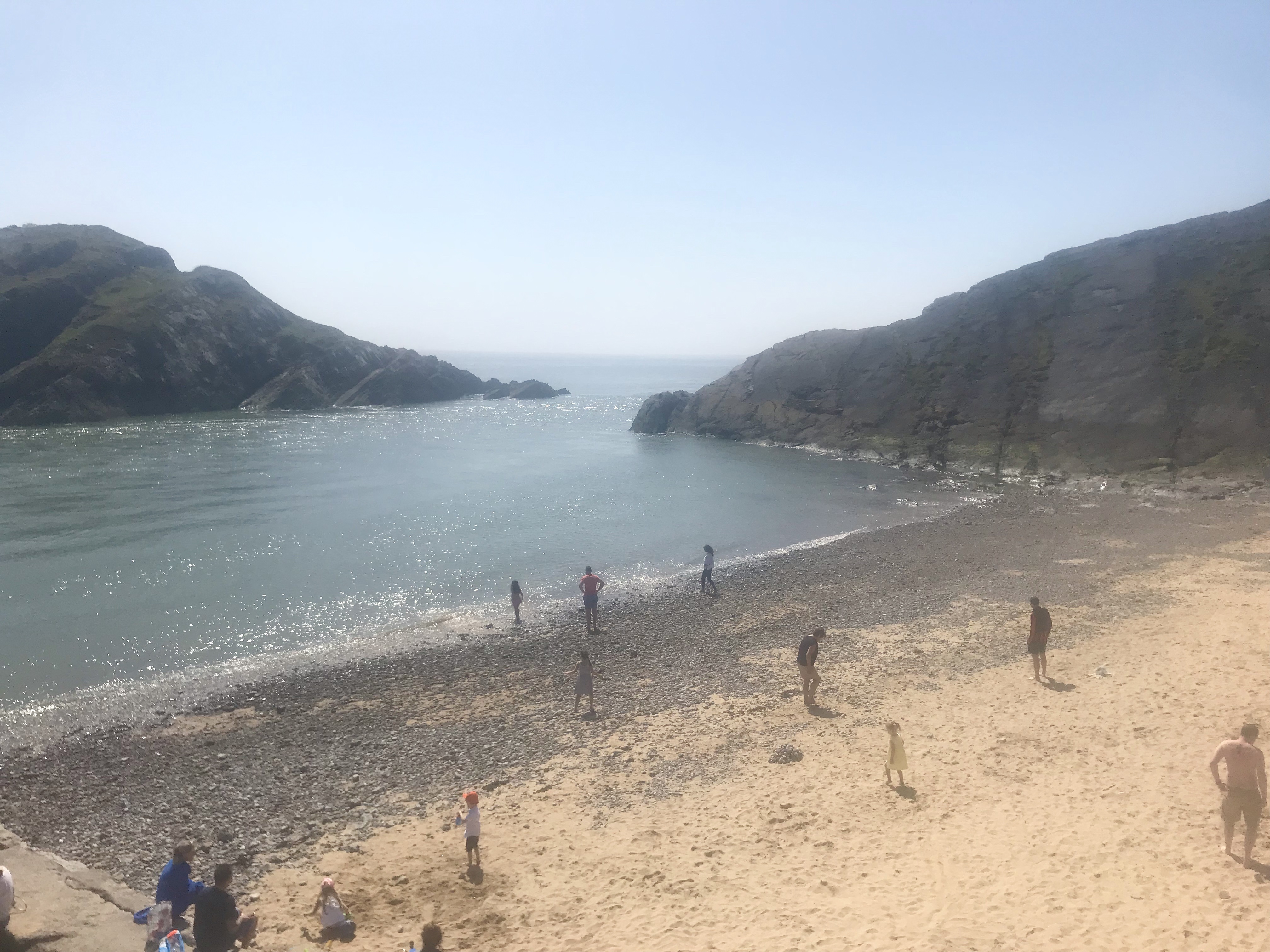 We received a warm welcome from the team at the family-run attraction who showed us around. I had no idea there was so much to do at the pier. From bowling and arcade games to seaside fish and chips and rockpooling and paddling in the sea at Mumbles Pier’s private beach, this is traditional seaside fun at its best.

First up was a game at the 10-pin bowling alley. Nestled upstairs above the arcade games, the four-lane alley has a wonderful retro vibe. It’s such a different atmosphere to the big bowling complexes we are used to – but just as much fun, especially as we had the place to ourselves. My children loved watching the balls travelling back up the lanes and amazingly, I beat Cardiff Daddy at bowling for what I think must be the first time ever. 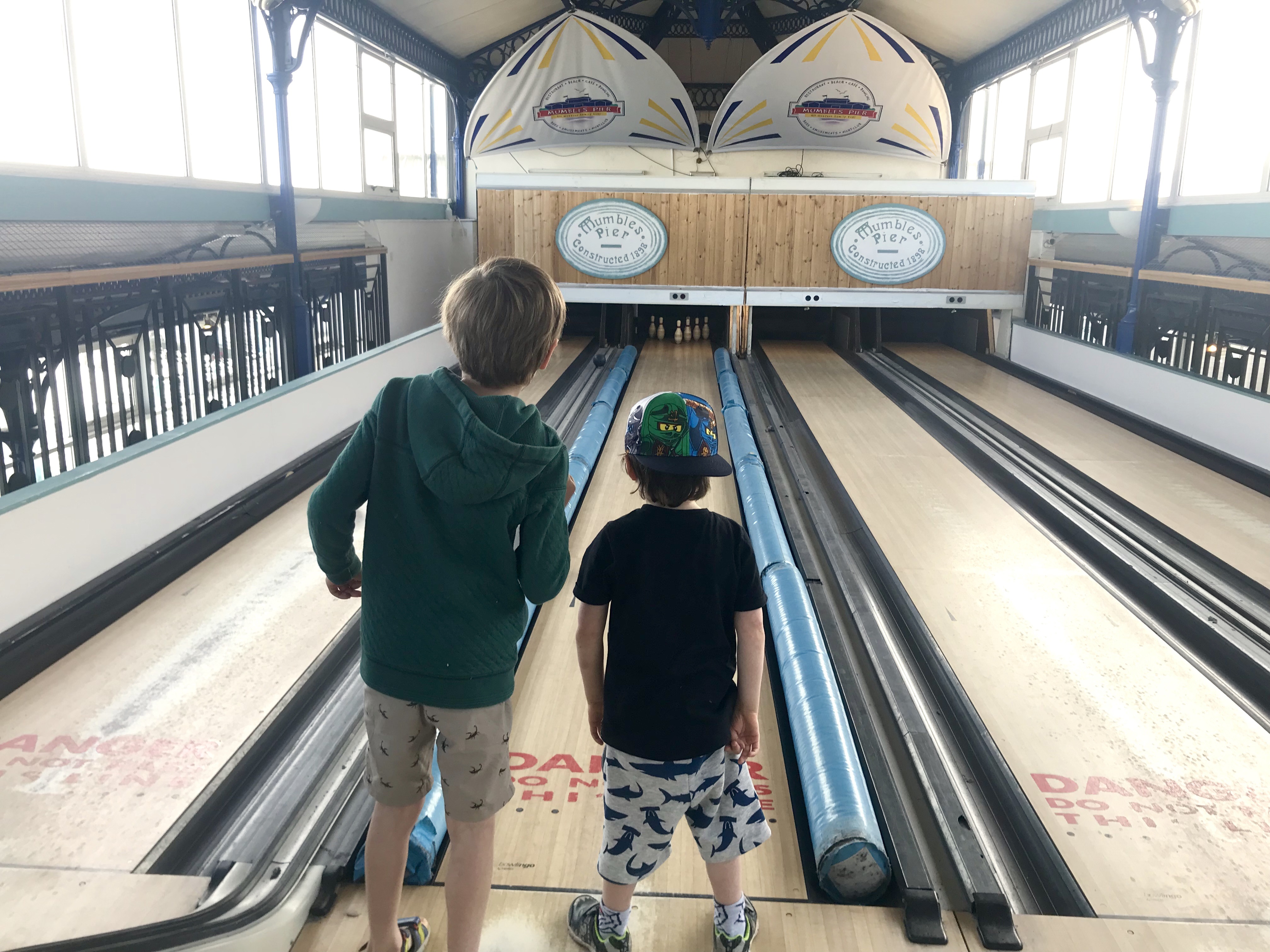 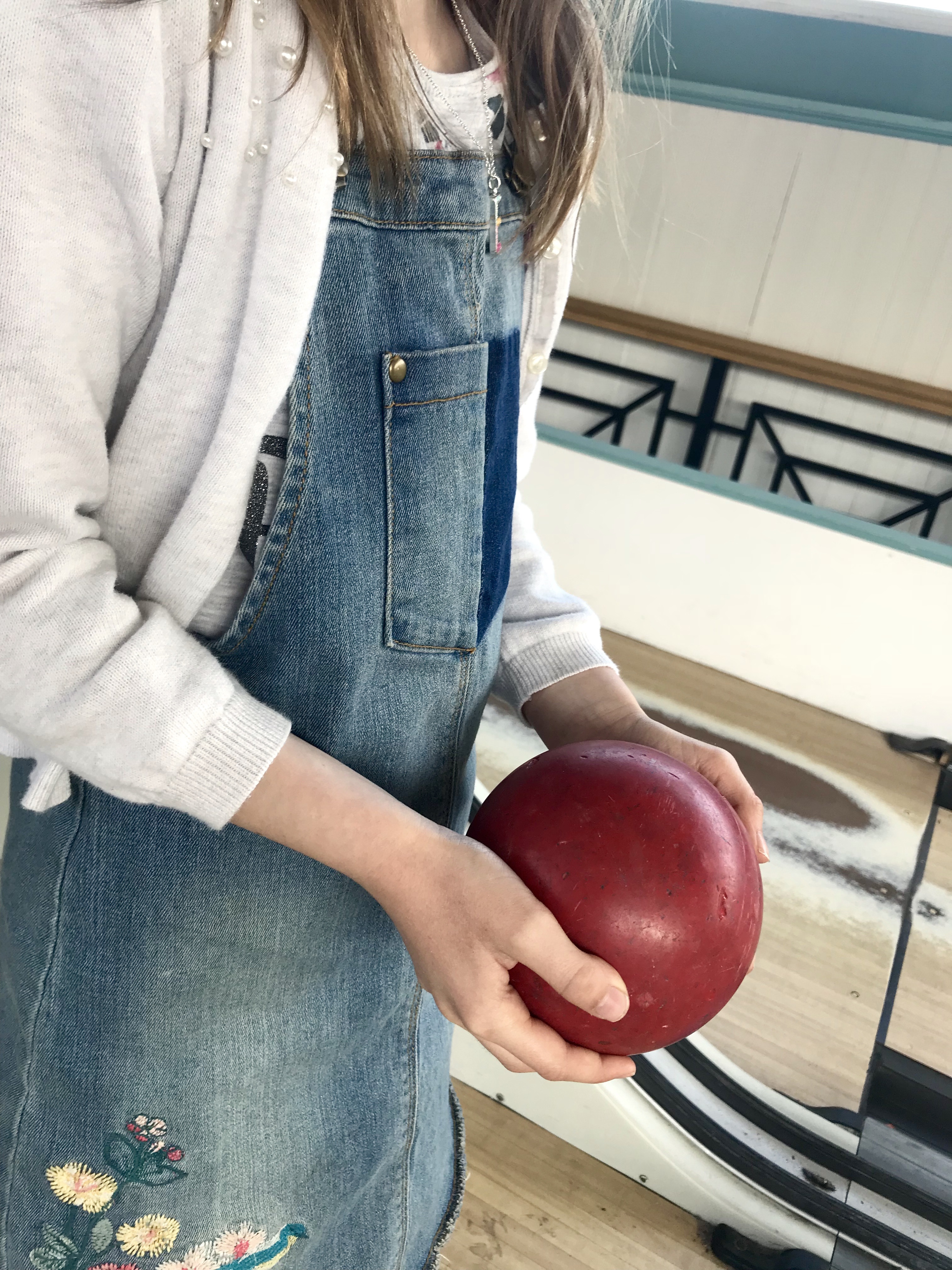 After the bowling we headed back downstairs to the amusement arcade. Growing up myself in the seaside town of Barry, the 2p and 10p slider machines are full of nostalgia for me and my favourite kind of amusement machine. I was pleased to see my children enjoyed them just as much. 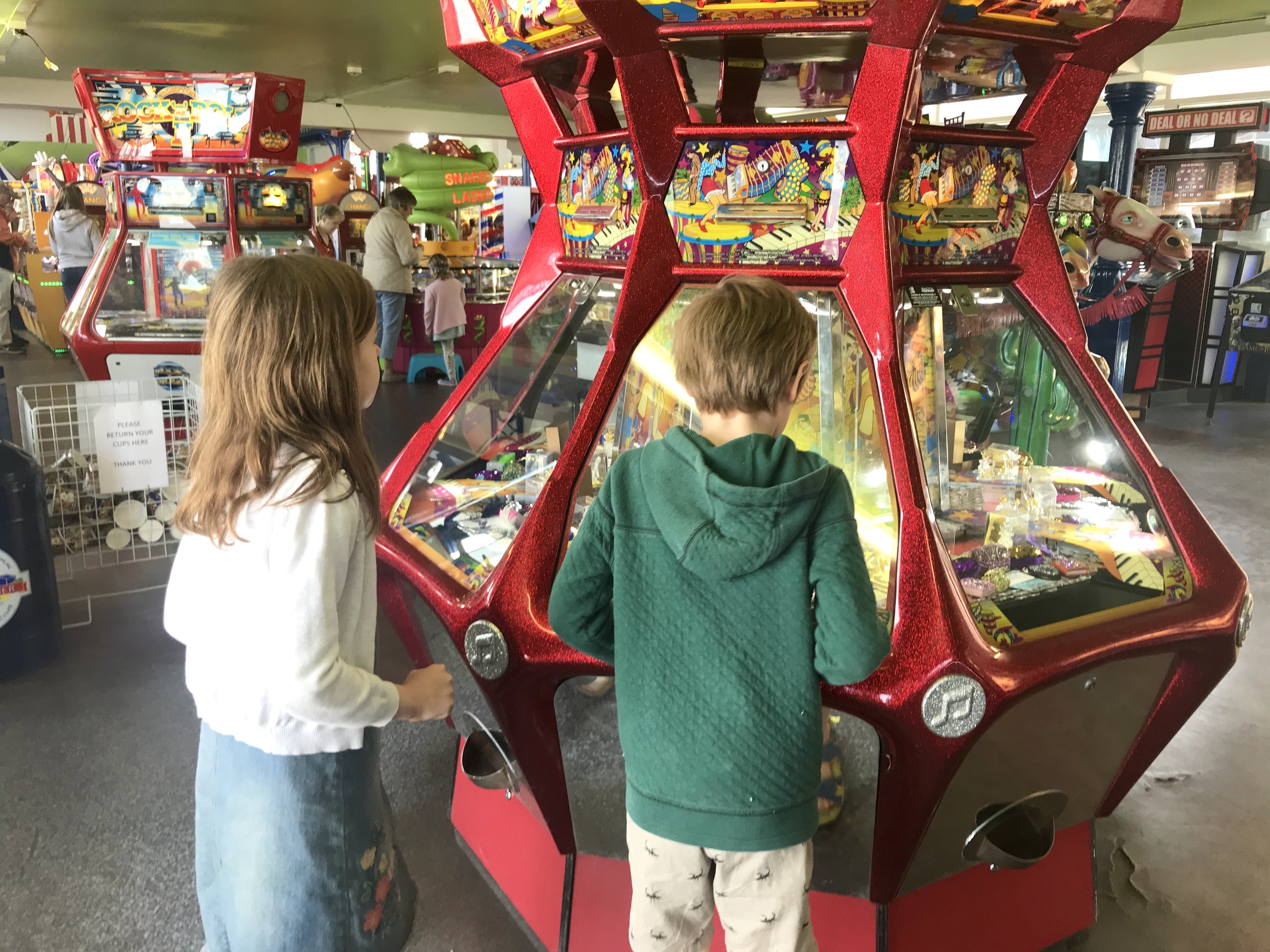 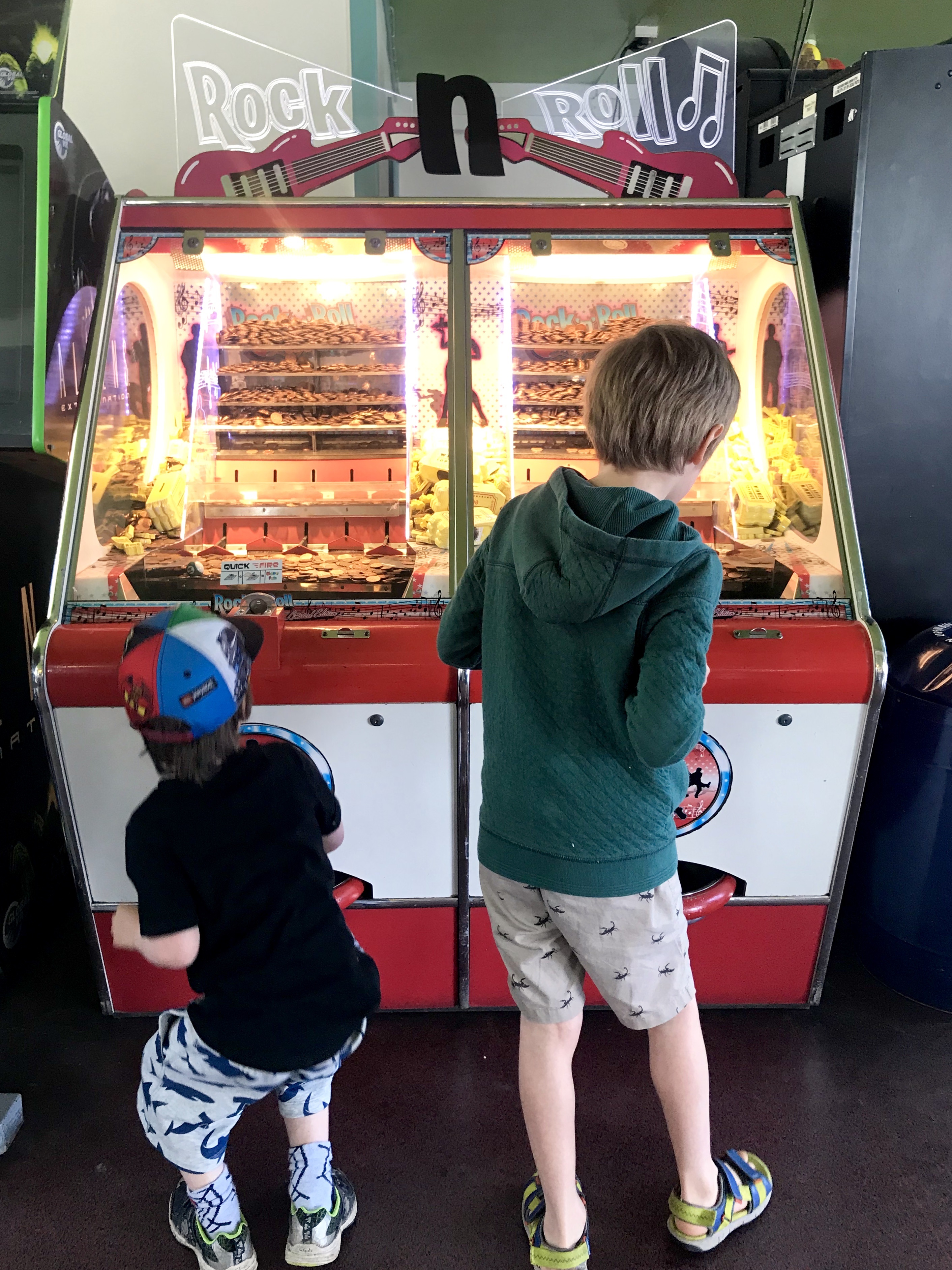 They also loved Mario Kart, and Mario and Sonic at the Rio 2016 Olympic Games, as well as a target game where you had to throw balls to try to knock down clowns. 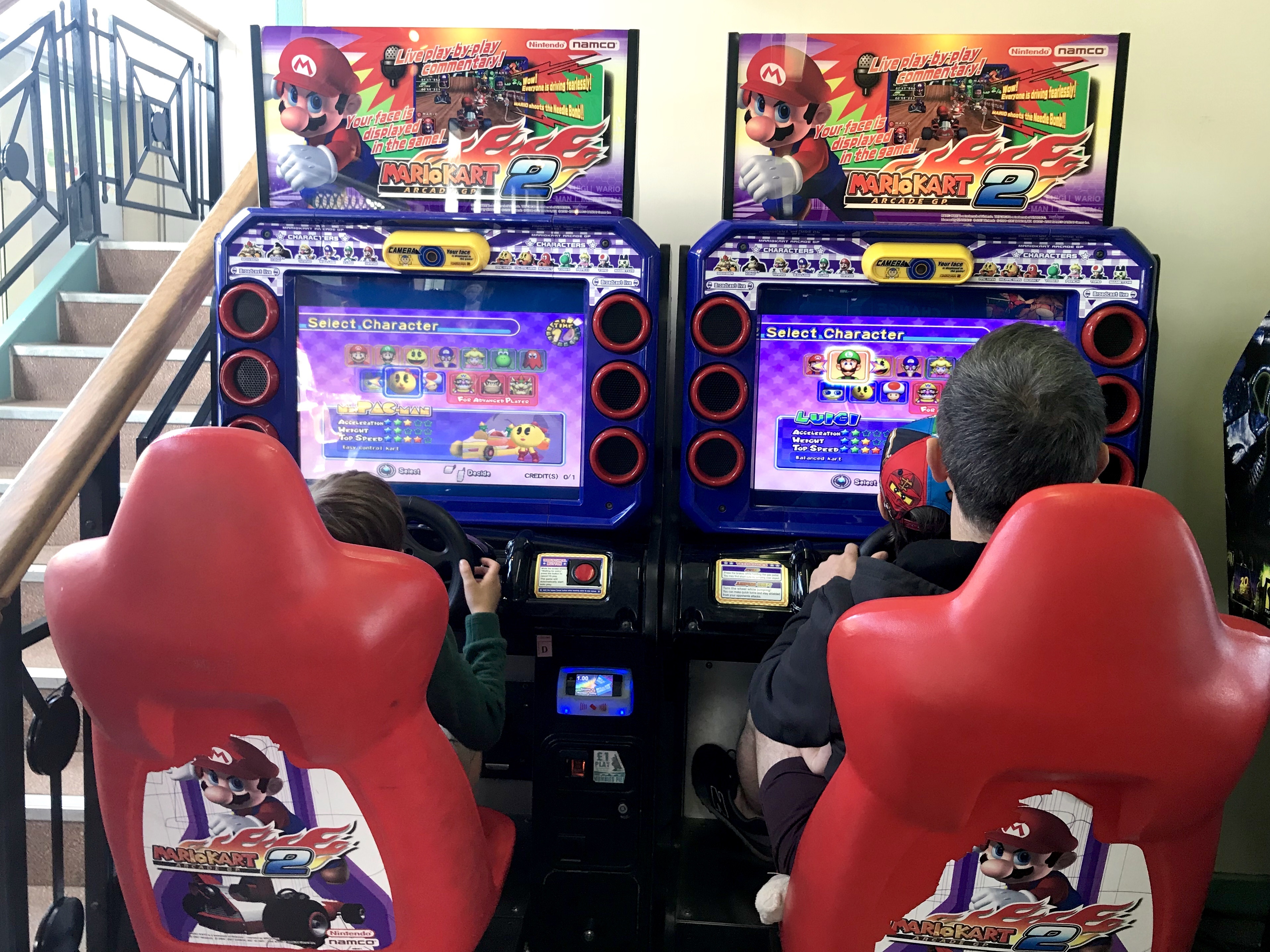 The majority of the 100 machines (other than the sliders and children’s ride-one) can be operated with a Gamez Card. You simply load the card with the required amount and then tap it on the relevant machines to play. 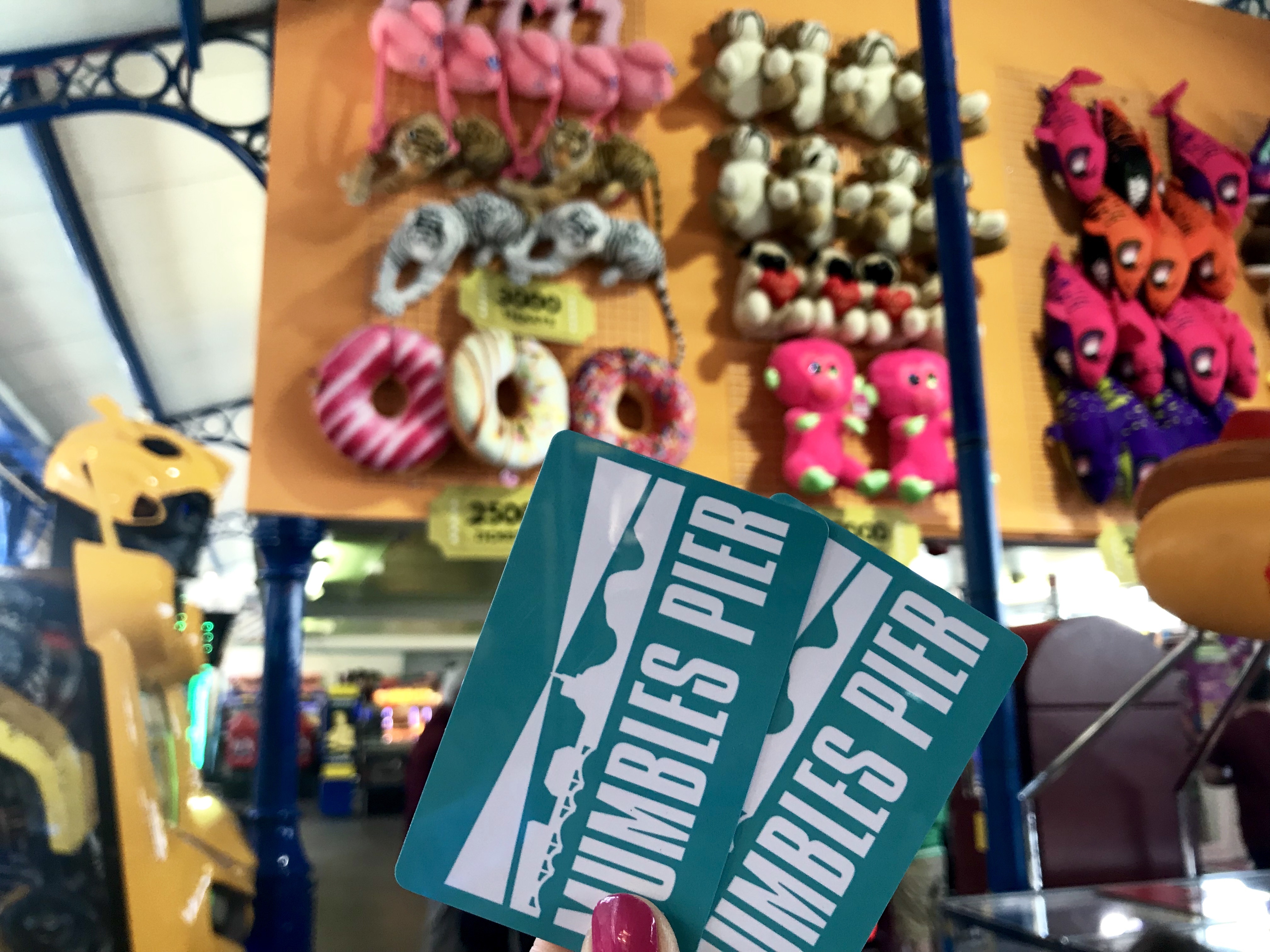 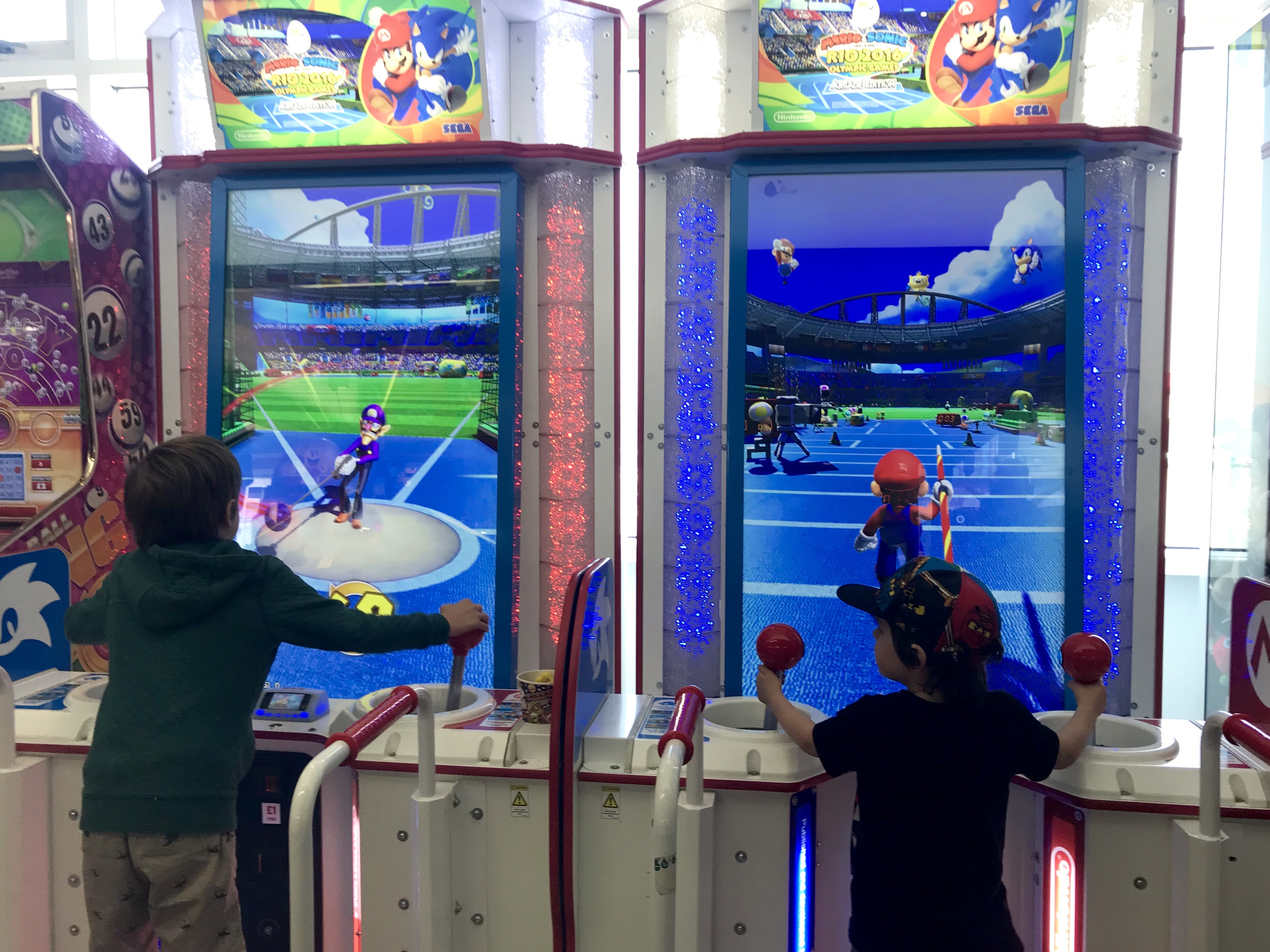 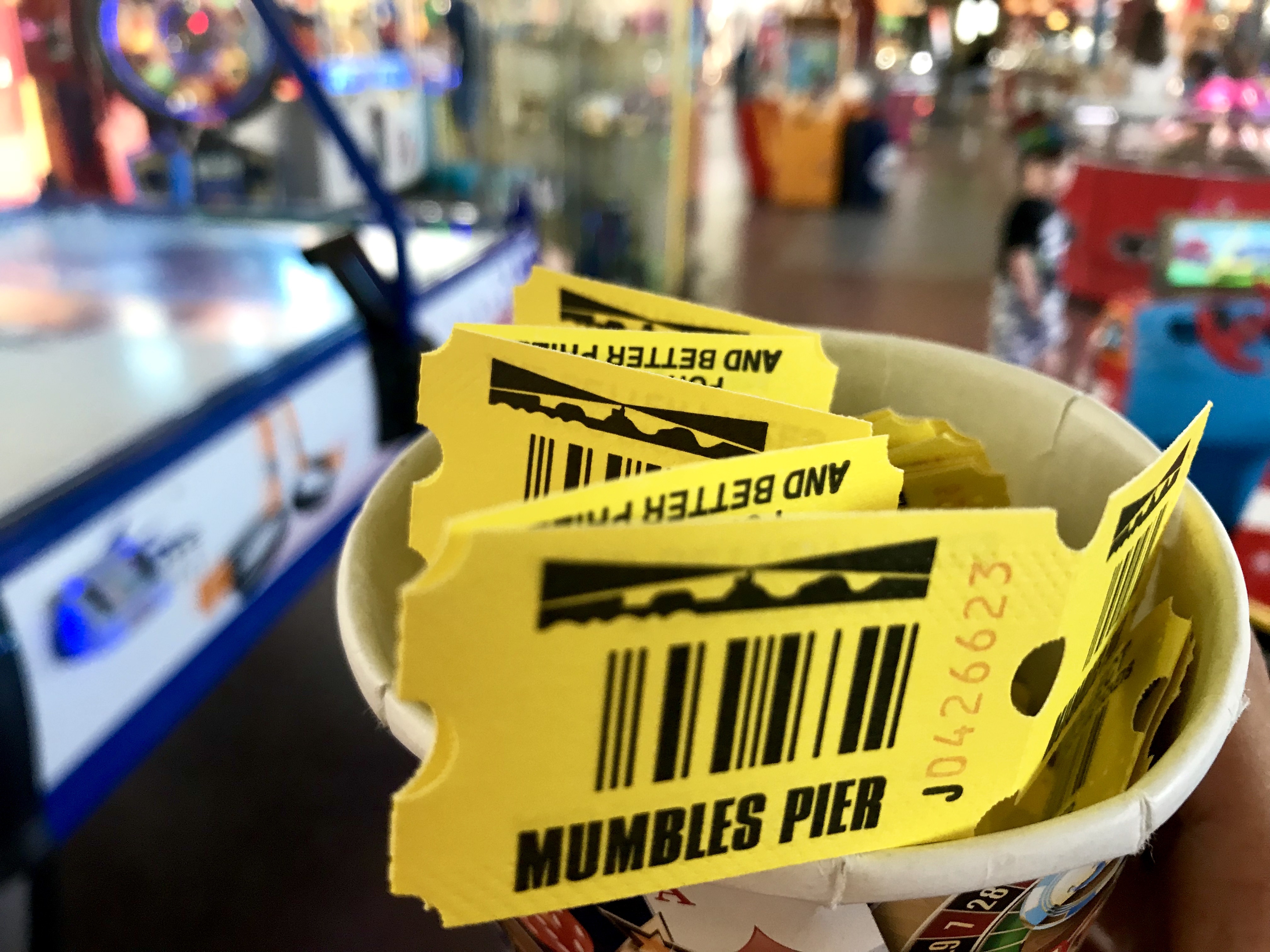 The pier staff kindly gave us a card each so this meant the children could choose what they wanted to play and we didn’t have to worry about coins. Many of the machines reward you with tickets which can then be exchanged for prizes. We swapped ours for a frisbee.

By this time the mist had started to lift and we were greeted with beautiful clear views across Swansea Bay. I had no idea Mumbles Pier had its own private beach until our visit – and it’s gorgeous. 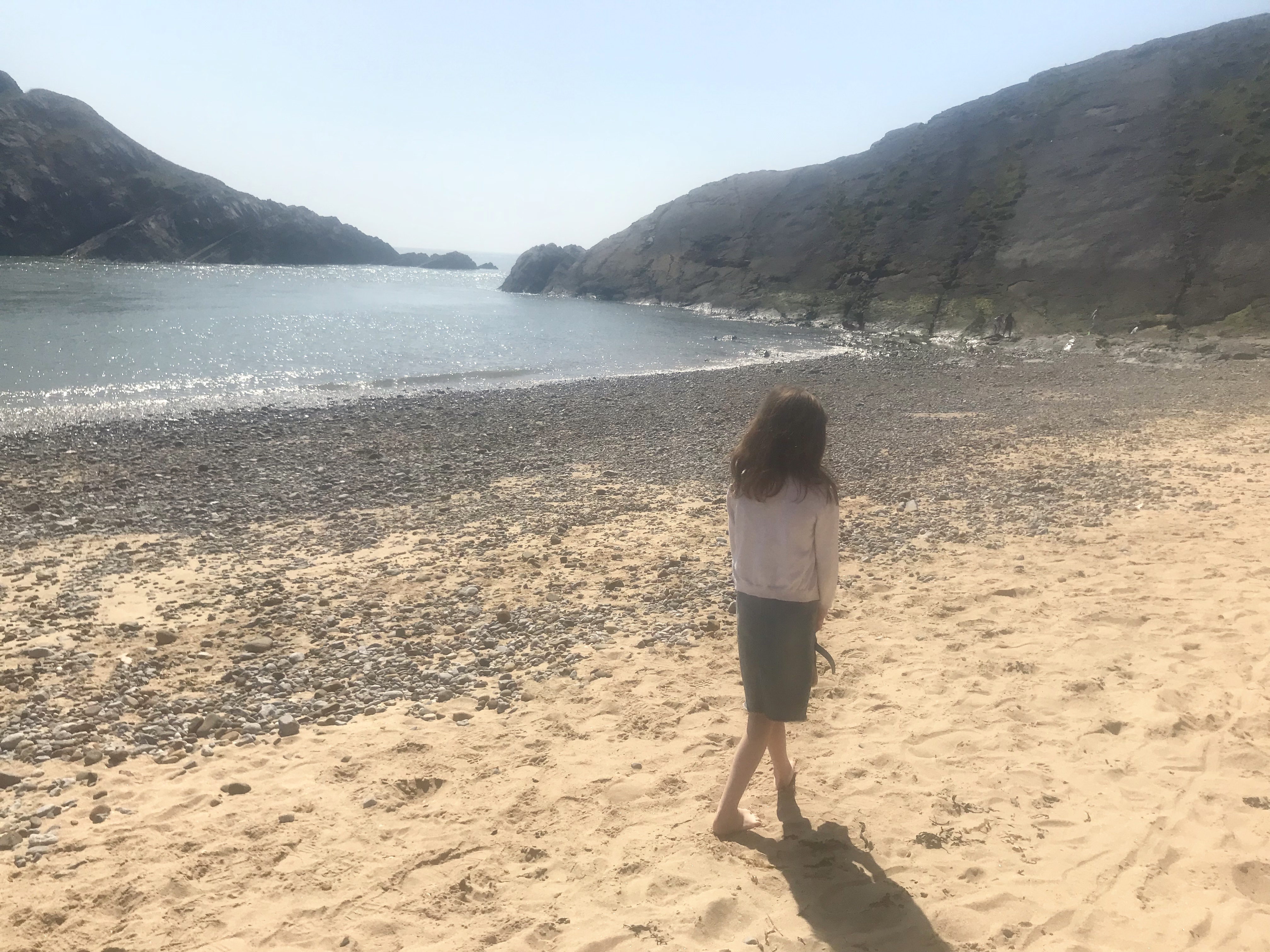 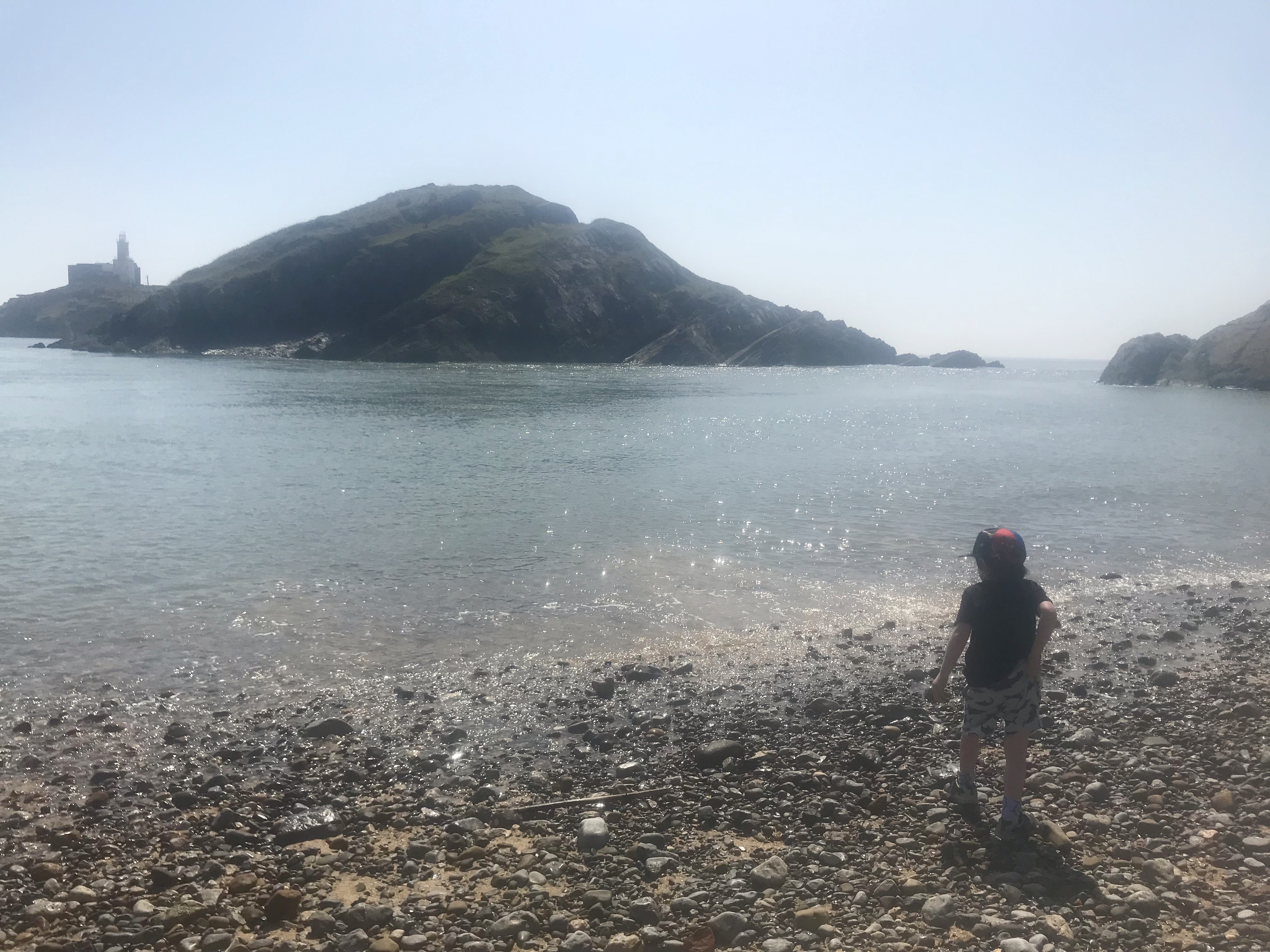 The sandy beach is a real sun trap with picturesque views. My children enjoyed paddling in the waves, climbing around the rock pools and playing in the sand. 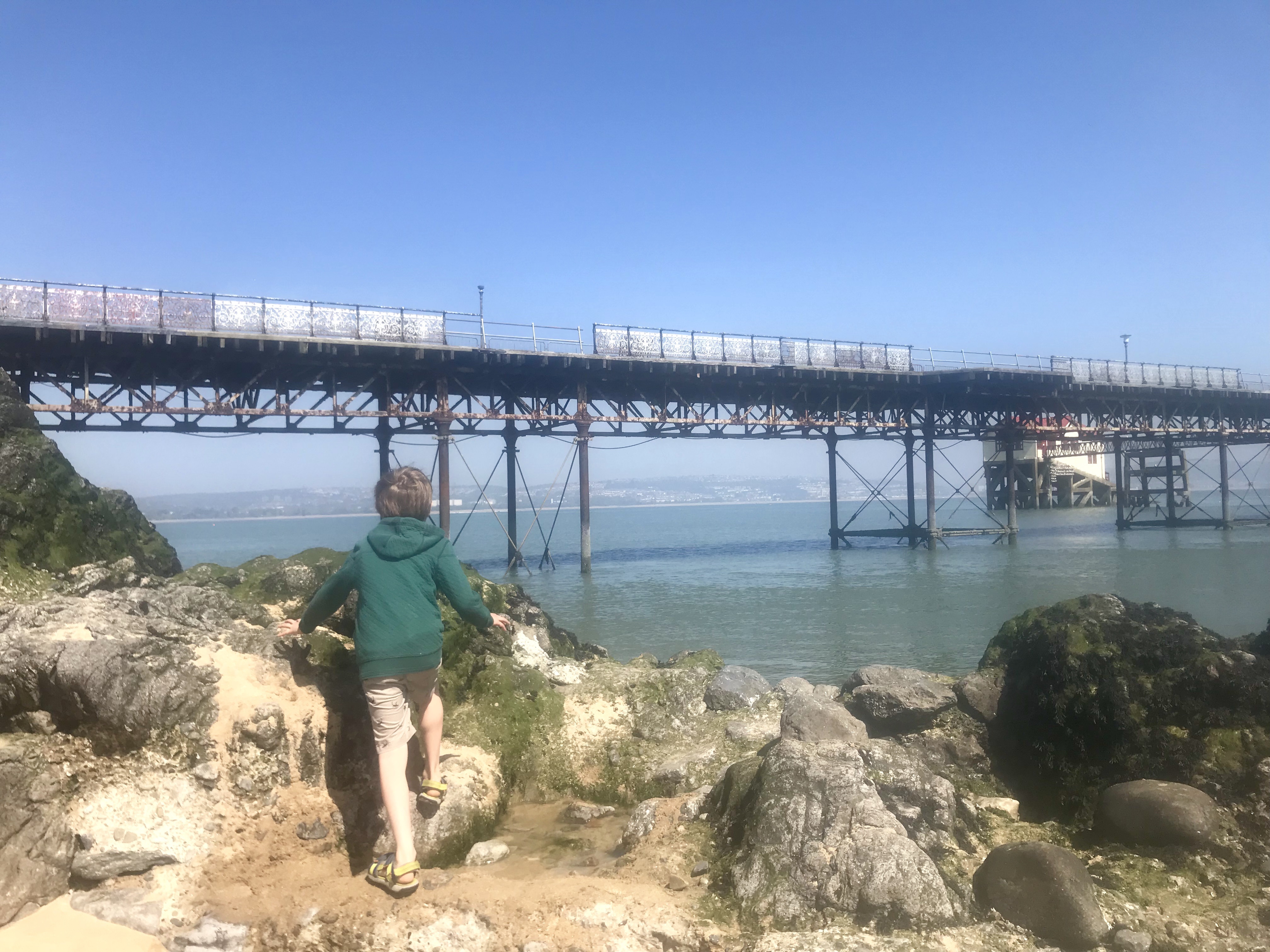 Dogs are welcome on the beach apart from school holidays and the beach is often used for family-friendly events and activities. 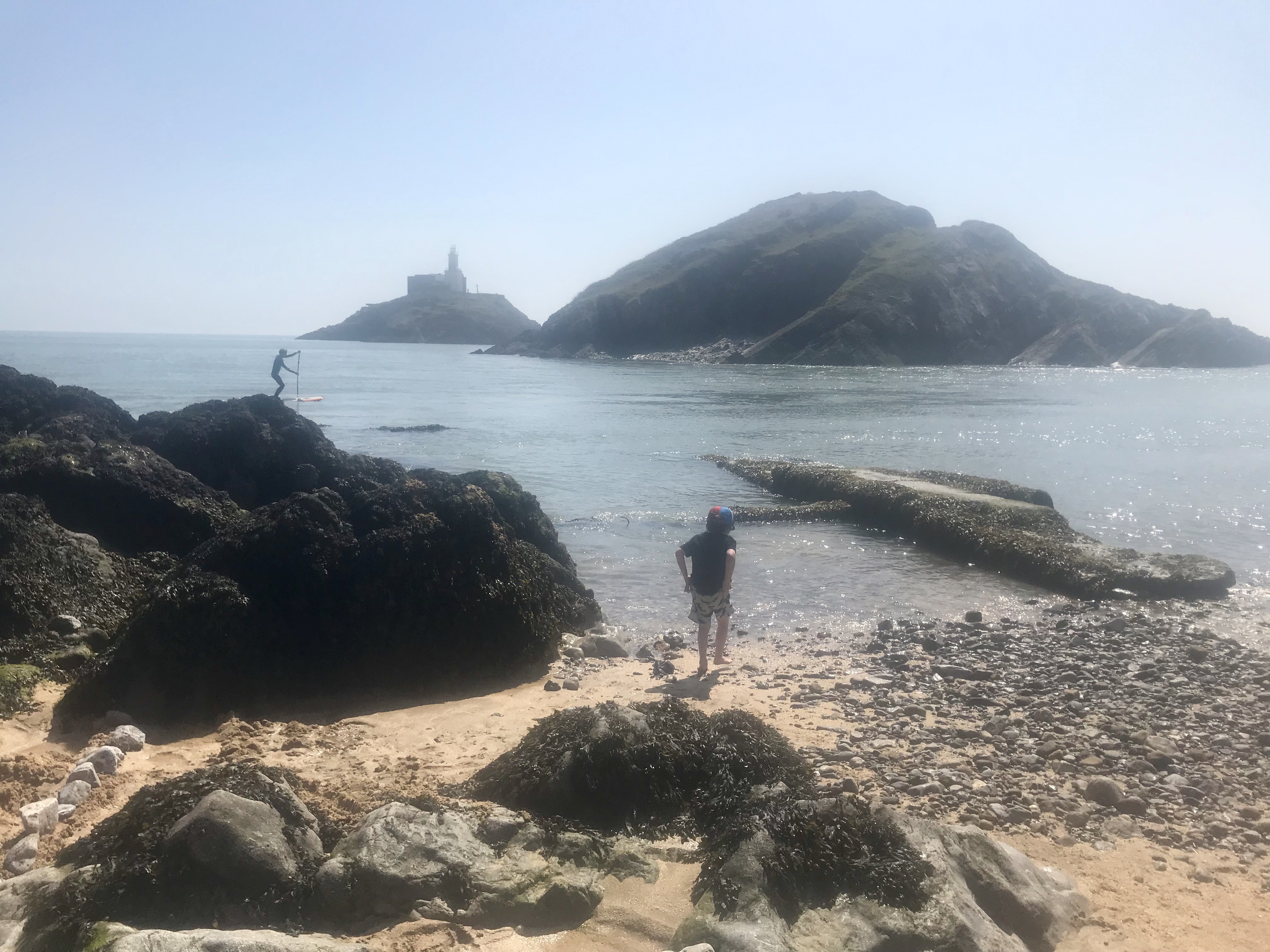 There are two dining options at Mumbles Pier – Copperfish, a fish and chip restaurant where you can dine in or take away; and Beach Hut Cafe which looks exactly how you imagine a seaside cafe to look with its colourful beach hut decor, Victorian chandeliers, self-playing piano, and striking views out to sea. The cafe serves a range of breakfasts, sandwiches and paninis, traditional seaside classics such as pizza, steak, pies, burgers, scampi and chilli, as well as home made cakes. They have vegan and gluten free options available as well as hot and cold drinks, and an array of deliciously creamy ice creams, served either in a cone or pot or in a decadent sundae. 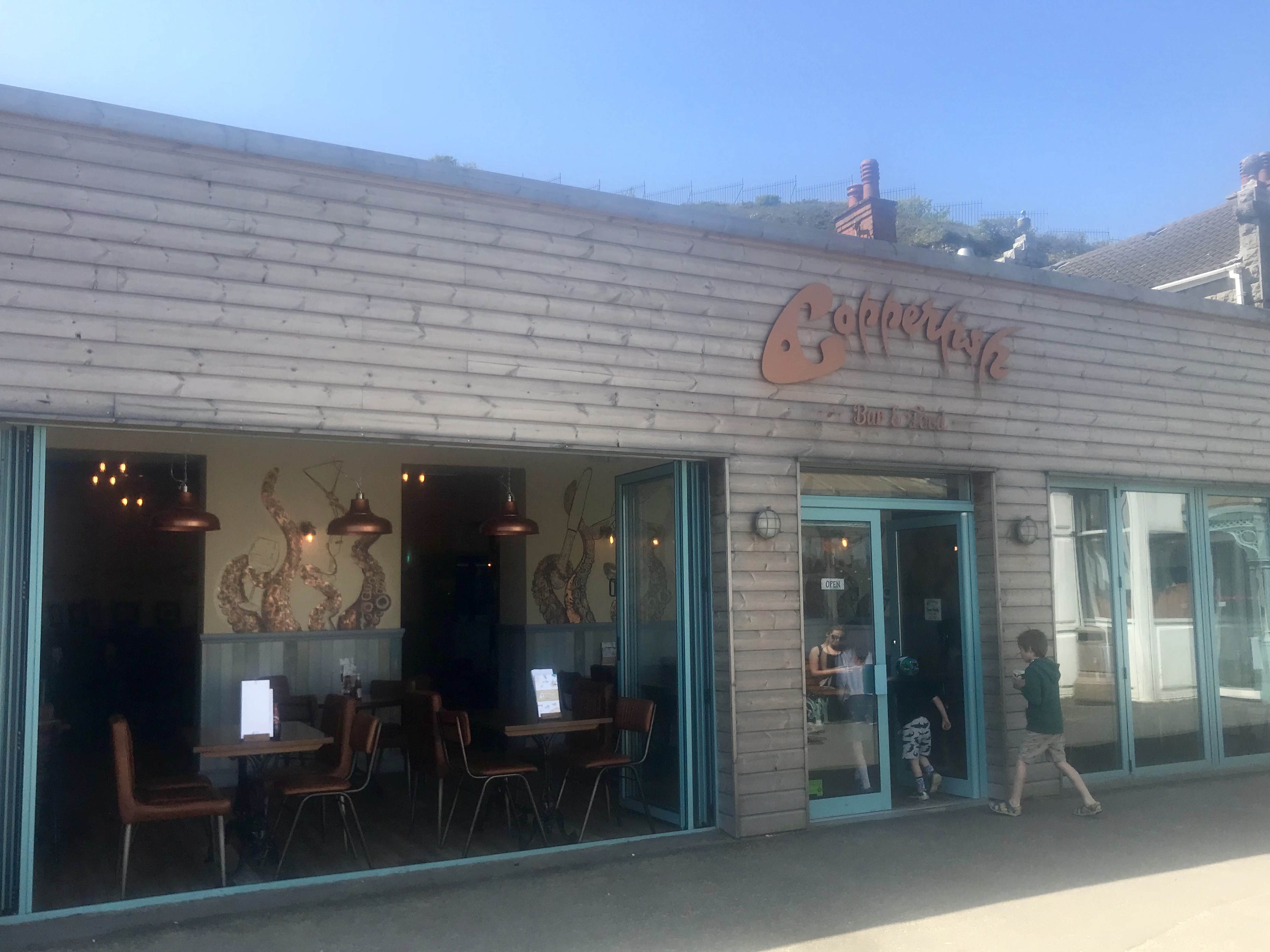 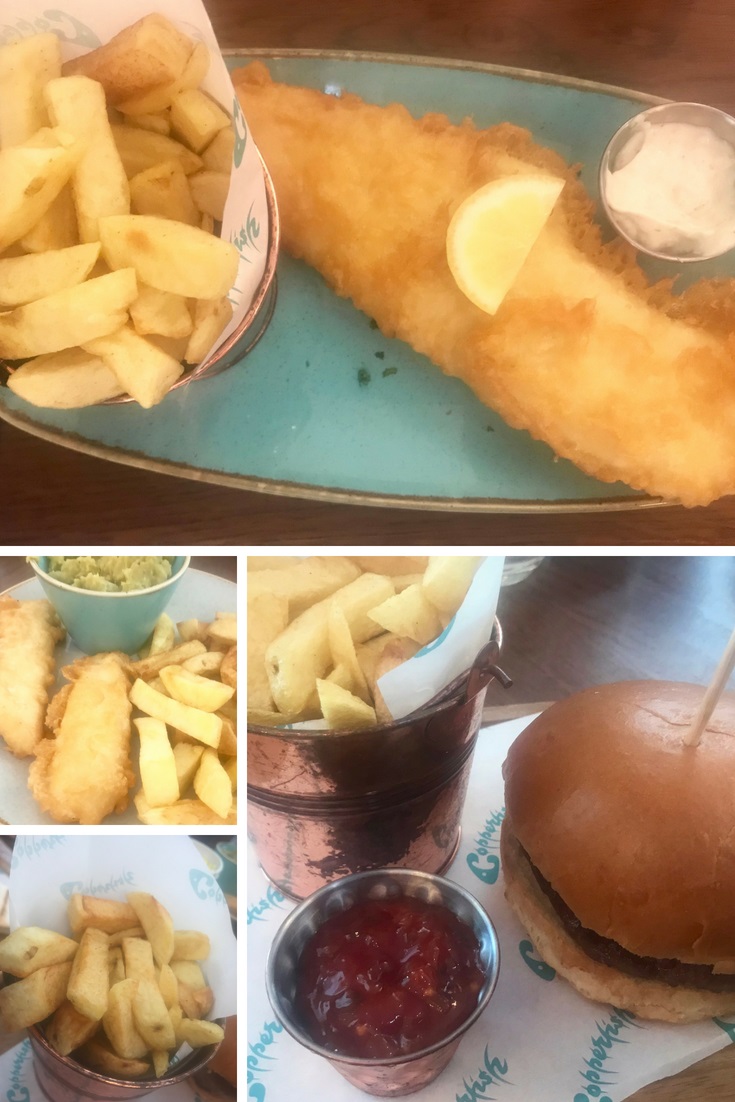 We decided to eat in Copperfish where Cardiff Daddy had cod and chips (£9.95); Little Miss E, my eight year old daughter, had cod goujons, chips and peas (£4.95) from the children’s menu; both my sons age 6 and 4 opted for burgers from the main menu (£8.95) as they didn’t have burgers on the children’s menu. There wasn’t a vegan choice on the Copperfish menu but the staff were happy for me to order a vegan wrap filled with roasted vegetables from the Beach Hut Cafe. We all had chips which had that distinctive chip shop taste but weren’t at all greasy.

No trip to the seaside is complete without an ice cream and so we headed to the Beach Hut Cafe for dessert. I was so pleased to see dairy-free vegan ice cream available and so I had a deliciously smooth and flavoursome chocolate ice cream. My boys both had bubblegum, Miss E had Candyfloss while Cardiff Daddy opted for triple chocolate. 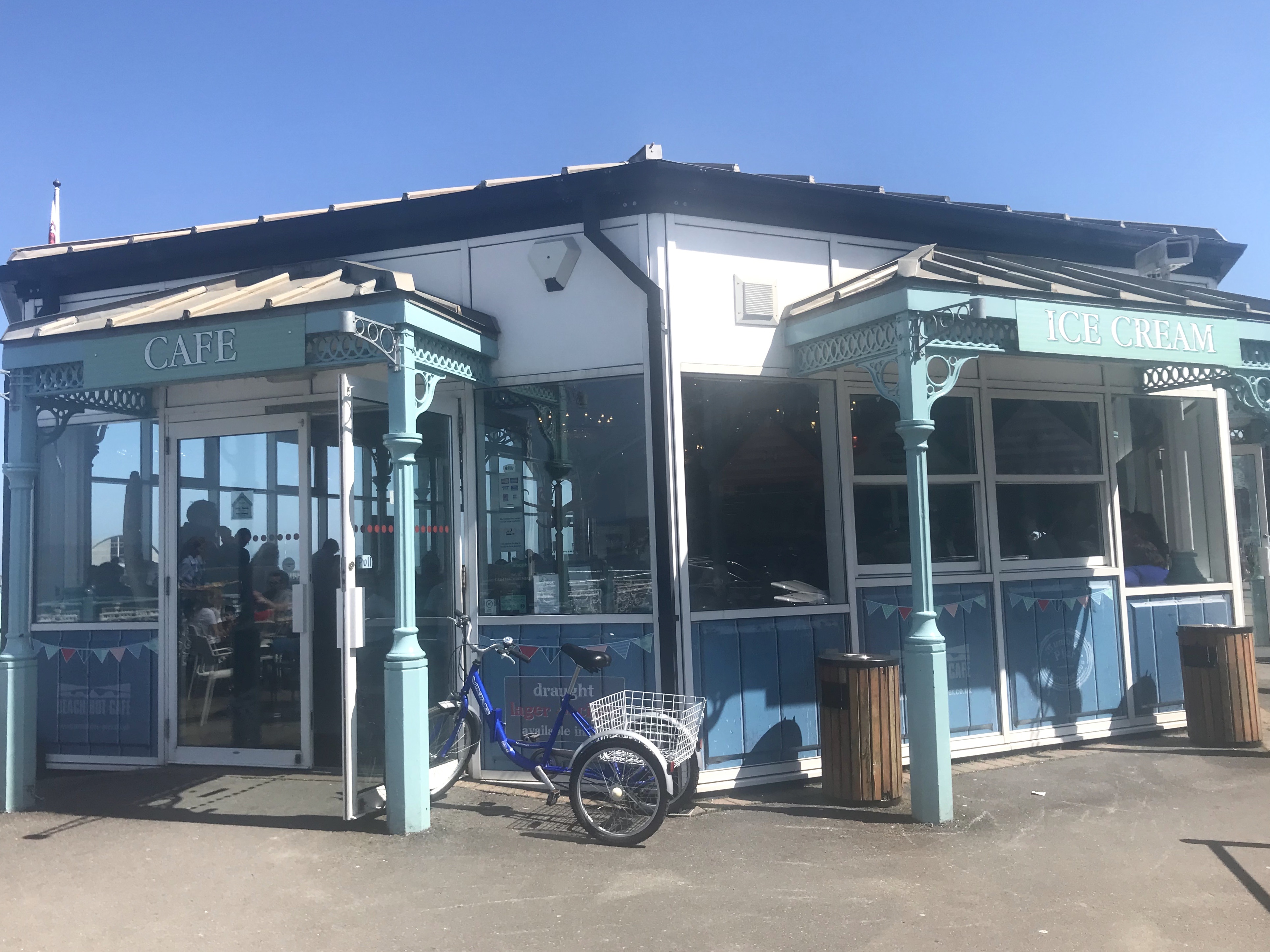 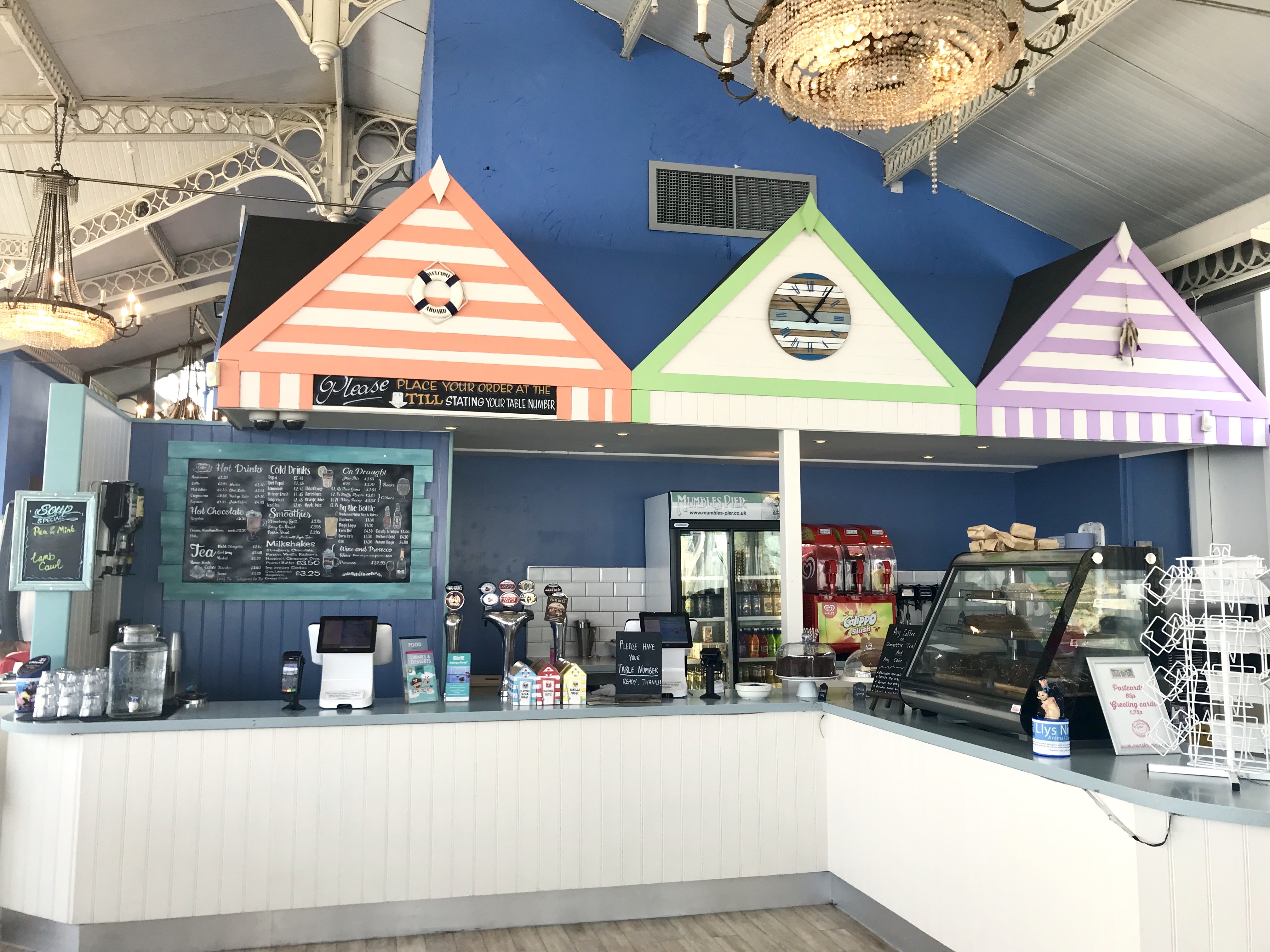 We spent around five hours at Mumbles Pier in total. You could extend your day by taking bikes and scooters and walking across the seafront paths, plus there’s a playground in the centre of Mumbles plus plenty of shops and boutiques. Oystermouth Castle is nearby and Clyne Gardens is around a 10 minute drive away. 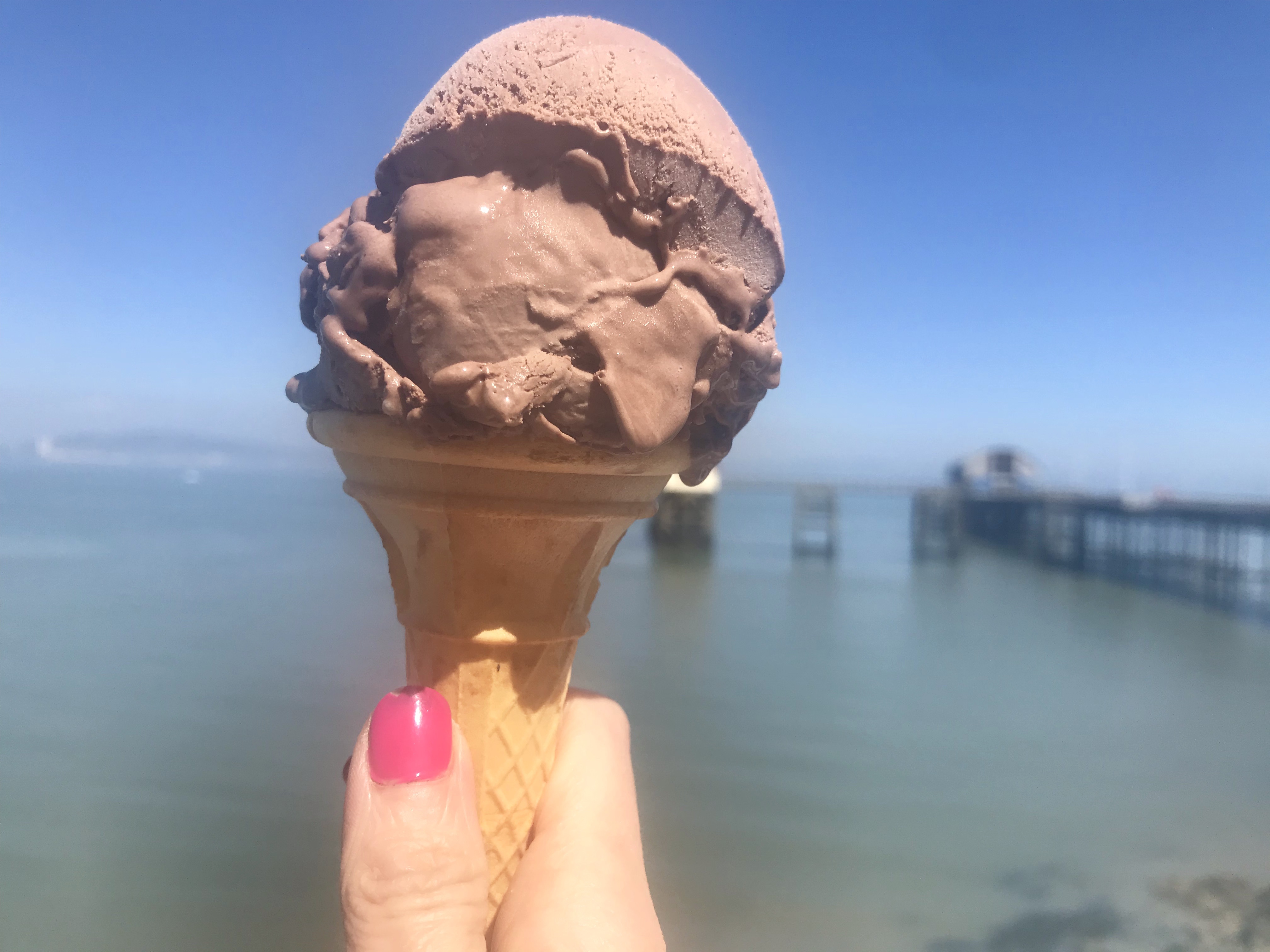 However we ended our day with a drive to Rhossili Bay in Gower (around 40 minutes away) to enjoy the late afternoon sunshine. You can read more about our trip to Rhossili Bay here.

Watch our video of our day out at Mumbles Pier here. 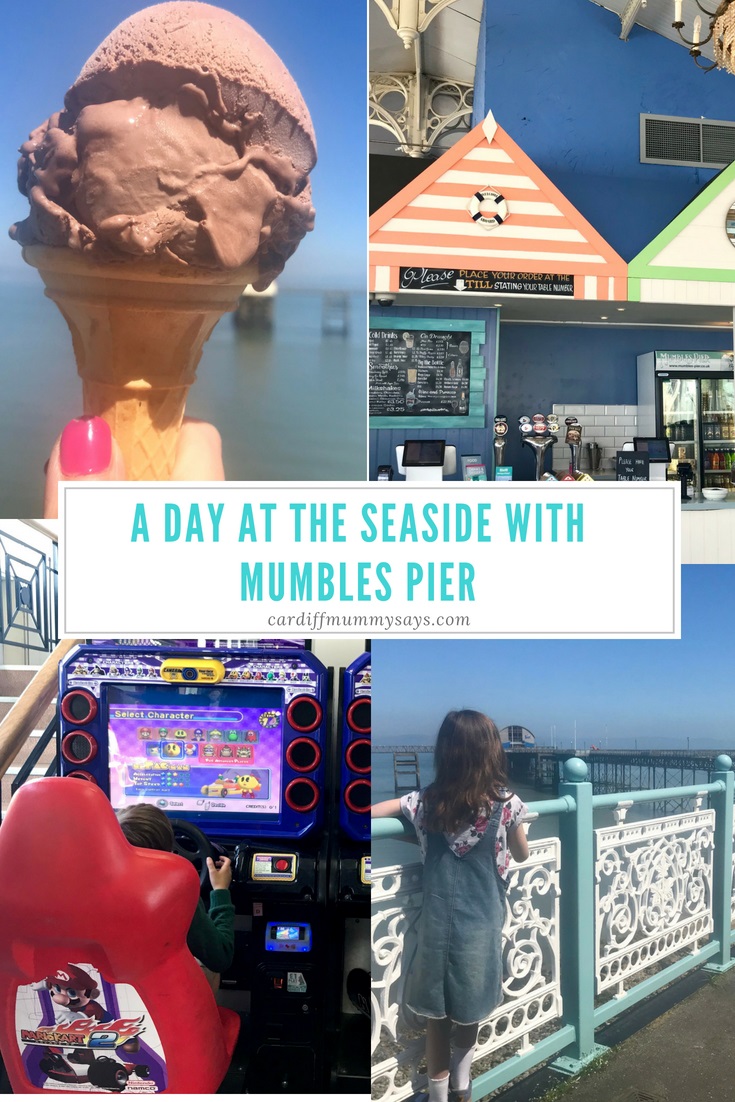 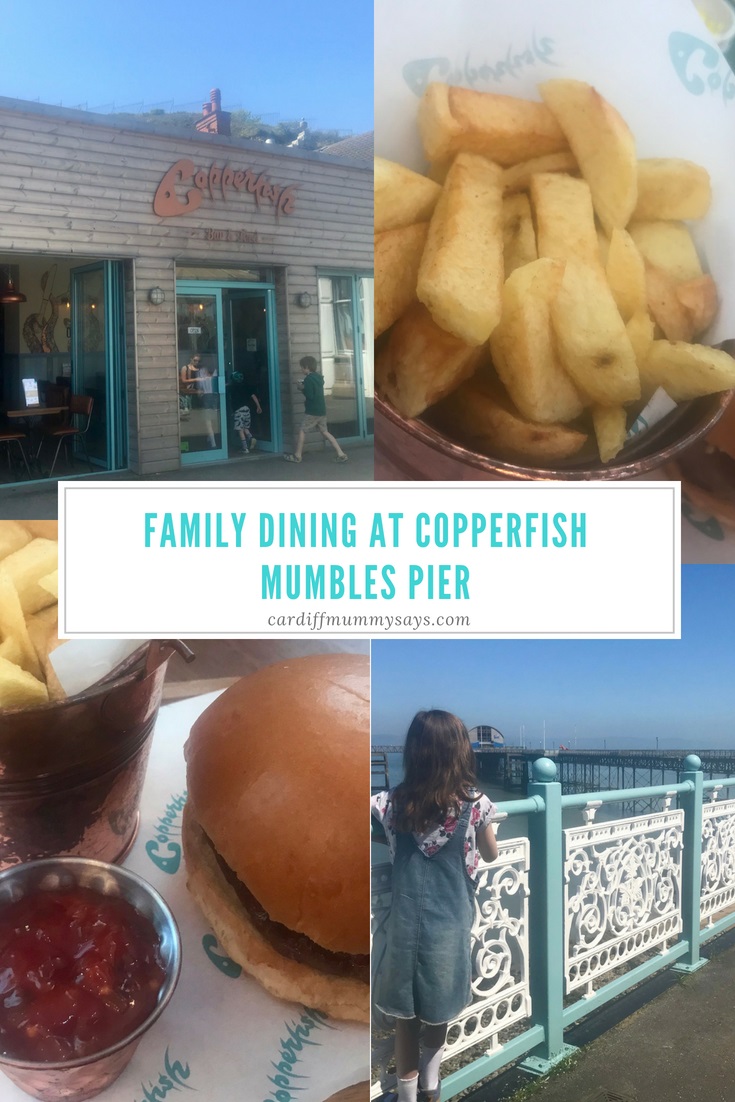