“Best day ever” is how Little Miss E, my 6½-year-old daughter, described Folly Farm as we were leaving the park to go home.

We’d been there since it opened at 10am and left when it shut at 5.30pm. We’d seen giraffes, lions, meerkats, flamingos and penguins; ferrets, rabbits, baby chicks, pigs, goats and a horse; played on outdoor pirate ship climbing frames and an indoor soft play; seen a magic show and a Wurlitzer organ; been on a few vintage fairground rides; seen the view across the park from the 25m-high Pembrokeshire Wheel – and had the privilege of meeting an Eastern Black rhino.

It certainly was an amazing day and one of the highlights of our recent family holiday to Pembrokeshire.

We’ve been to Folly Farm previously and absolutely loved our visits. It’s one of those places I don’t think we’ll ever get bored of visiting, because there’s so much to do, and every time we go, there’s something new to see. And it feels like great value for money too, especially if you buy online in advance at 10% cheaper (£12.56 for adults, £10.76 for ages 3-15, under 3s, free) or exchange Tesco vouchers for tickets.

We were invited this time as guests of Folly Farm, which in itself is a real treat. But when we got there, we discovered they had the most amazing experience lined up as a surprise for us – meeting one of their Eastern Black rhinos, one of the latest additions to the ever-growing zoo area. The zoo area has more of a wildlife park feel to it than a traditional zoo, with animals in beautiful and spacious enclosures, rather than cages.

Folly Farm is home to two Eastern Black rhinos – Manyara, a female, and male Nkosi. Both arrived in Pembrokeshire in October 2015, with Folly Farm being one of just six zoos in the UK caring for this critically endangered species. As rhino keeper Craig explained to us, there are fewer than 650 of them left in the wild, so the work zoos do in protecting and understanding them is critical to their survival in the wild. A third rhino, a breeding female, is due to arrive at the park later this year.

Craig explained that this species of rhinos are solitary creatures, which is why Manyara and Nkosi live in separate paddocks – although they are hoping Nkosi and the new female will hit it off! 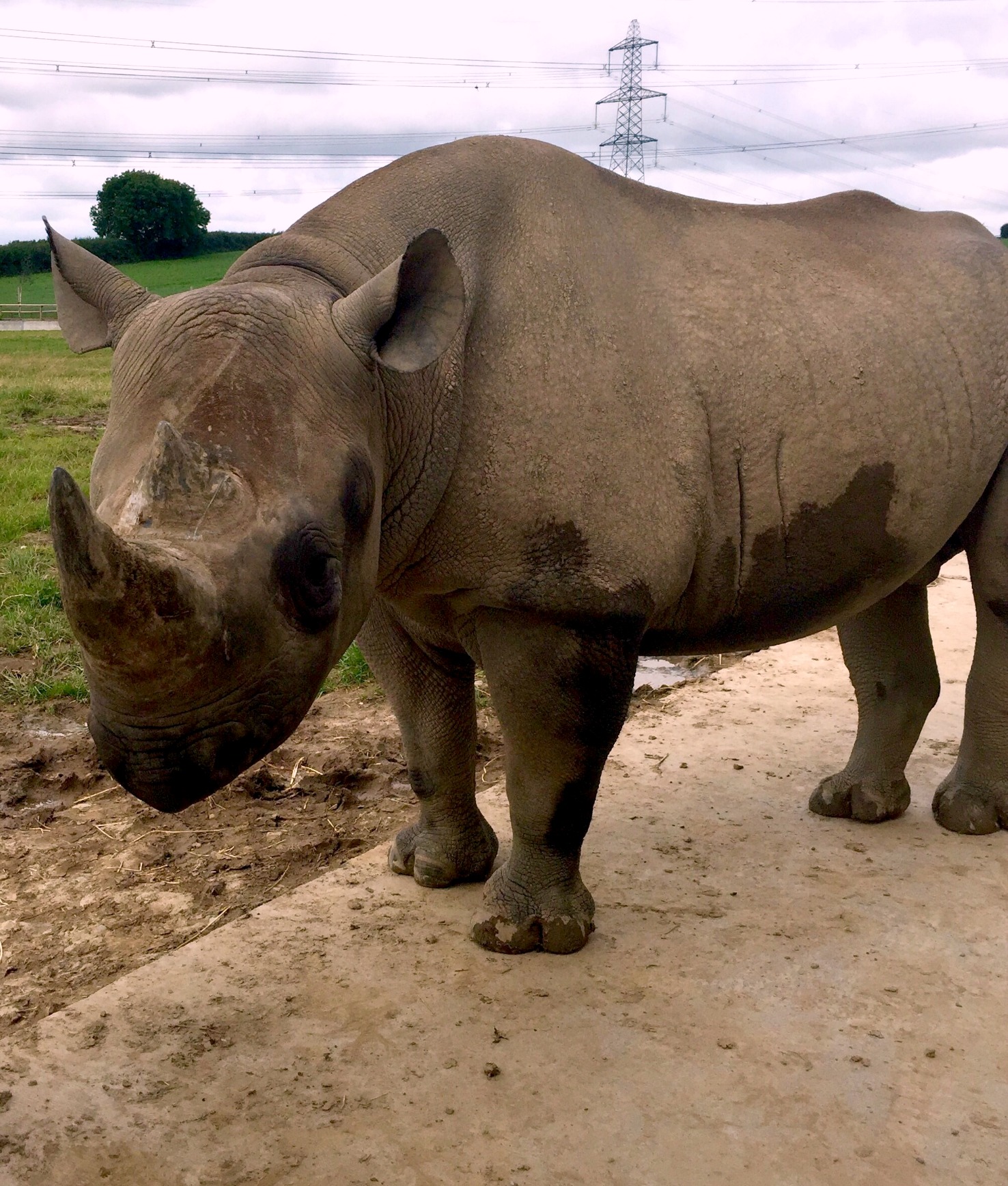 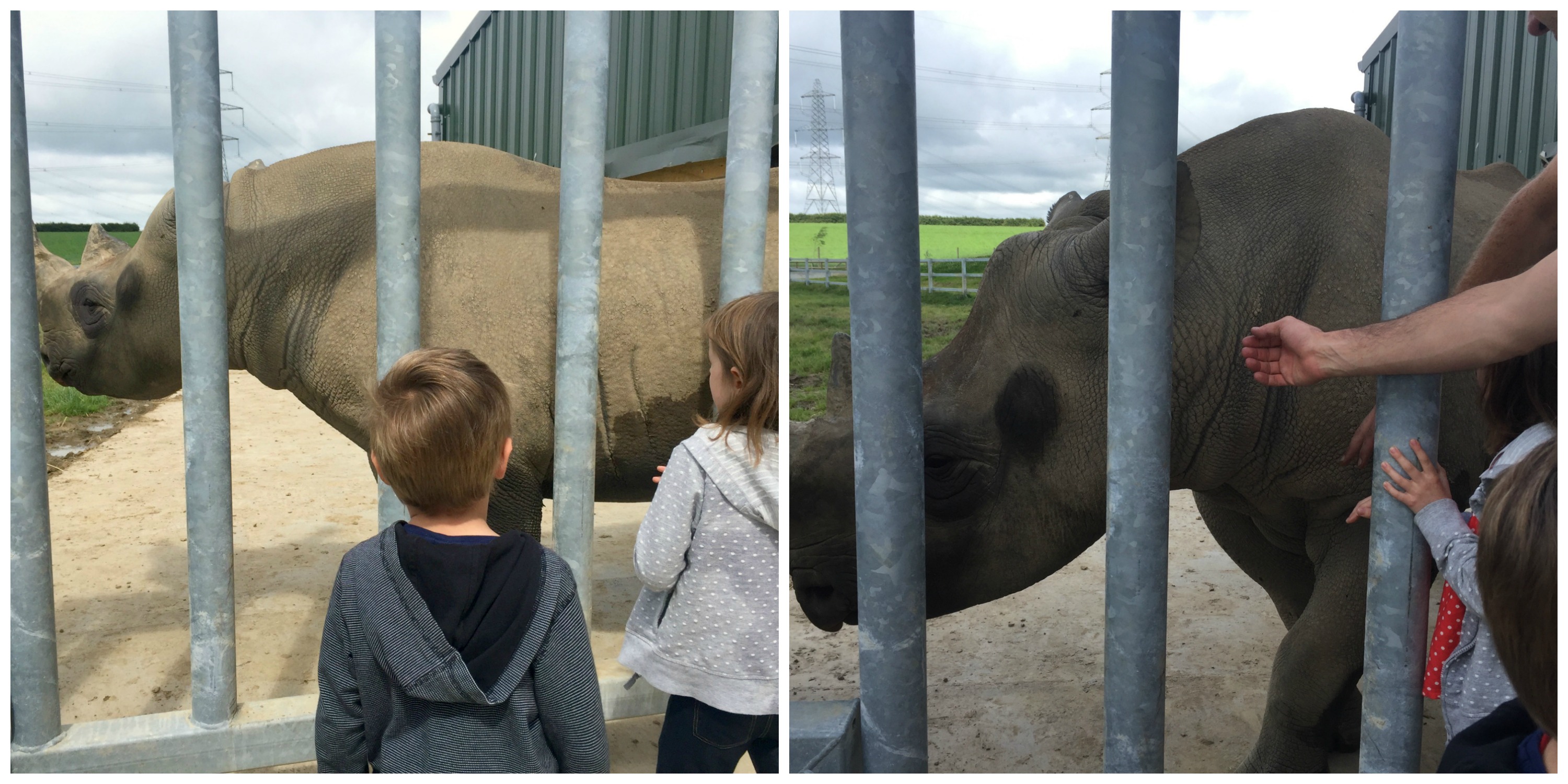 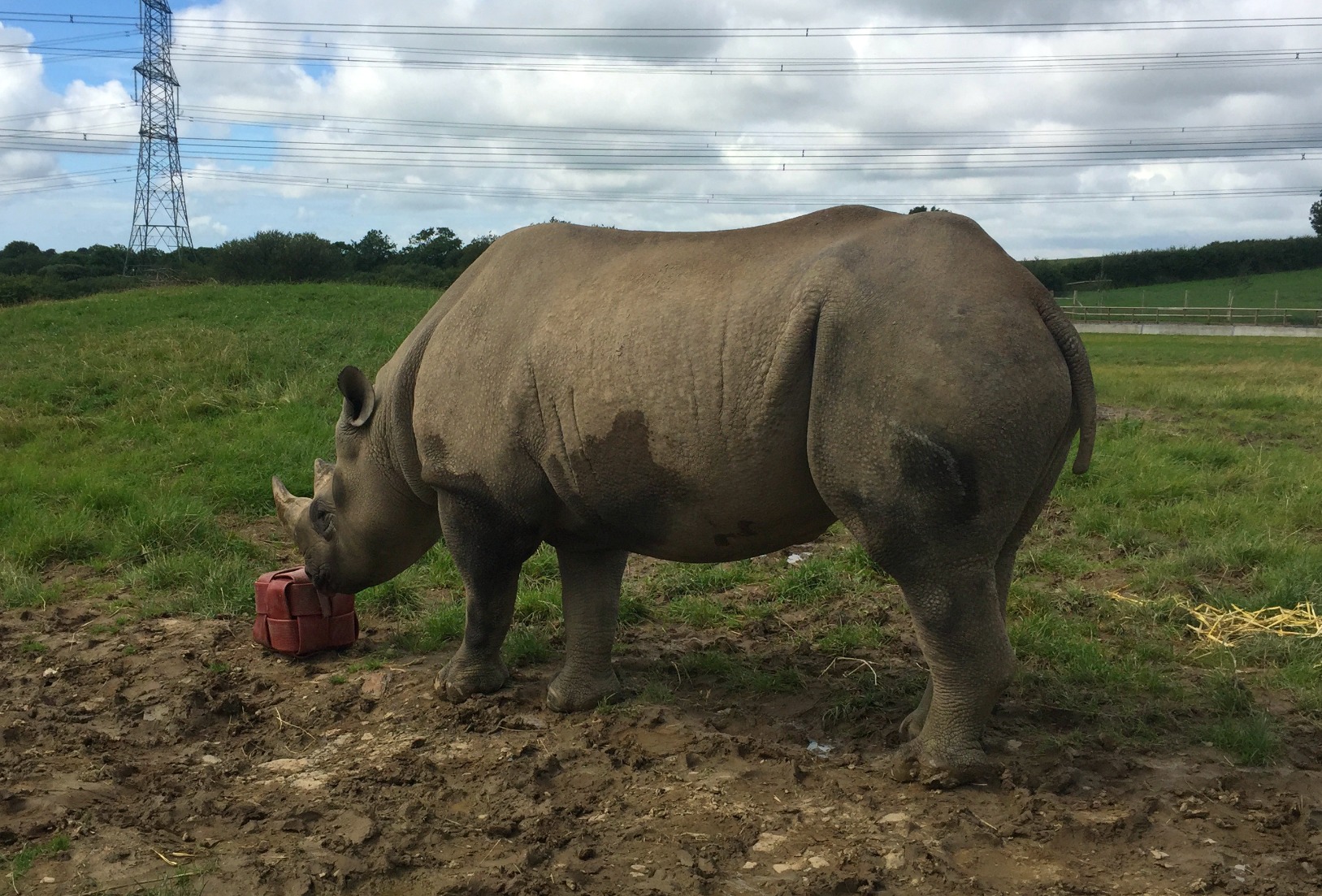 After exploring the ‘behind the scenes’ living quarters to see where the rhinos sleep, we were able to meet Nkosi himself. I must admit, I was a little apprehensive about this; he is a wild animal after all and I had visions of him charging at my children. But he was a real gentle giant, so calm and placid, and you could see the bond he had with Craig. Nkosi slowly walked up to us – we had a big metal barred gate separating us, but he came so close and was happy for us to stroke his belly and back. His skin was quite hard – Craig explained that this is because rhinos like to roll in the mud, as it protects their skin from the sun. He lifted the flaps of skin at the top of Nkosi’s leg, where the mud can’t get to and the skin was so soft and tender underneath. Being that close to such an unusual and rare animal is such a surreal and humbling experience. 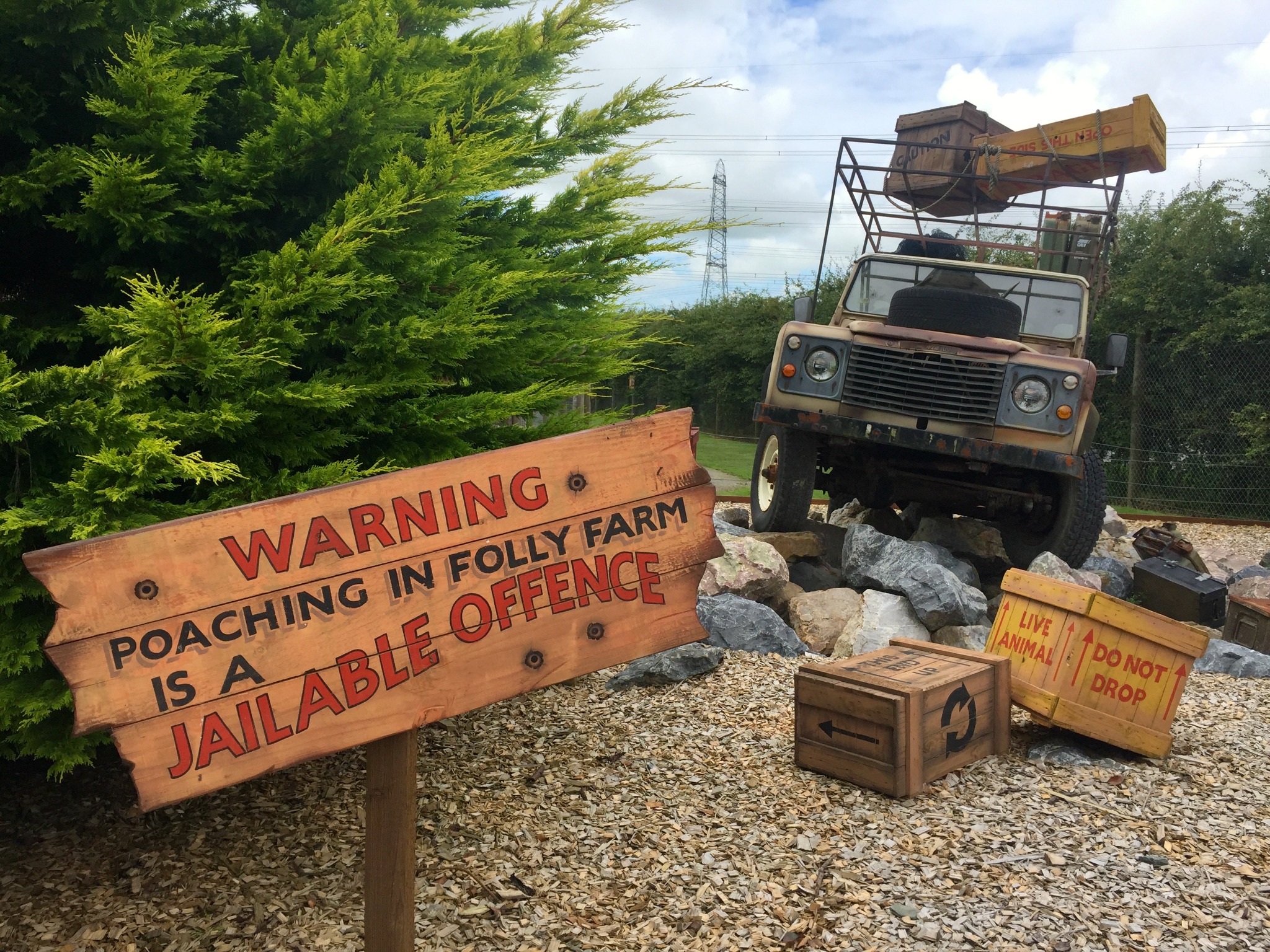 Nkosi wasn’t the only animal we managed to get up close and personal with though. The giraffe viewing platform at Folly Farm is incredible, bringing you up to the same level as the giraffes’ heads. If you’re lucky – as indeed we were – they come right up to the platform and you can stroke their necks and heads. At one point, we saw three giraffes and two zebras walking in some kind of procession around the enclosure. Just beautiful. 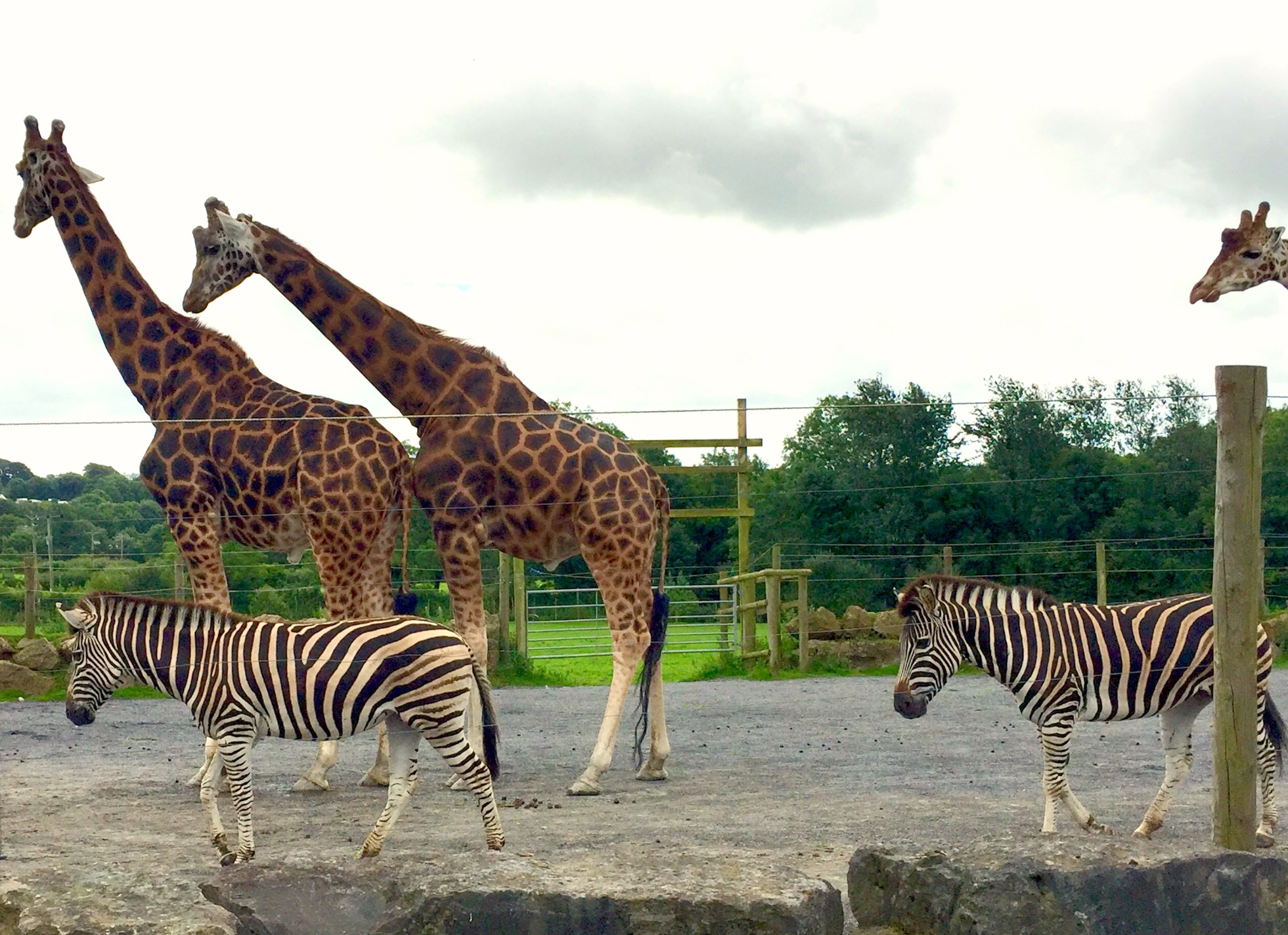 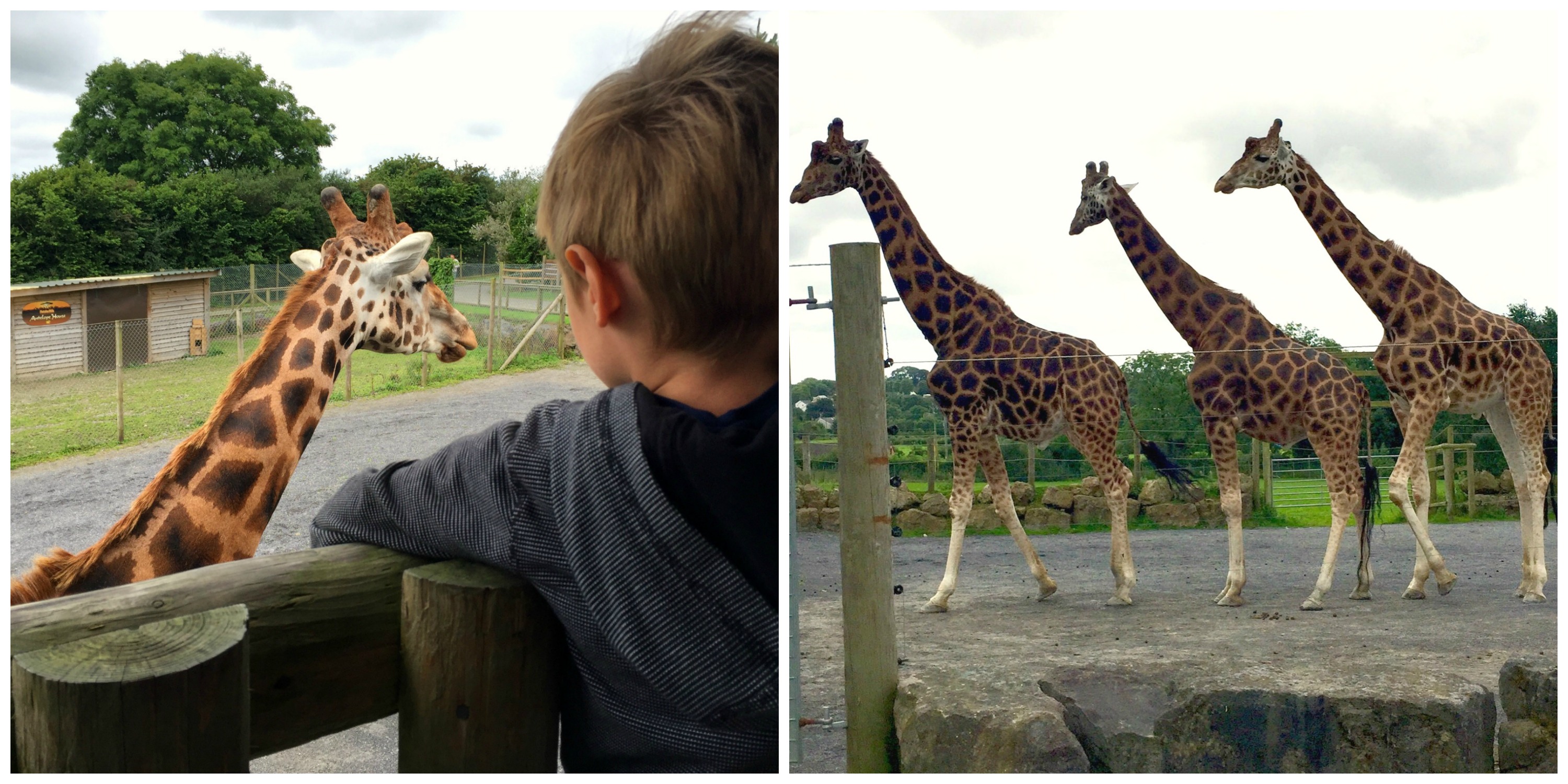 Penguins are my all-time favourite animal. I adore them! So we made sure to attend one of the keepers’ talks at the penguin enclosure. Folly Farm is home to 28 Humboldt penguins and when we visited the keeper jokingly asked us to excuse the penguins’ appearance, because they were currently moulting their feathers. Personally, I thought their extra fluffy look was gorgeous! 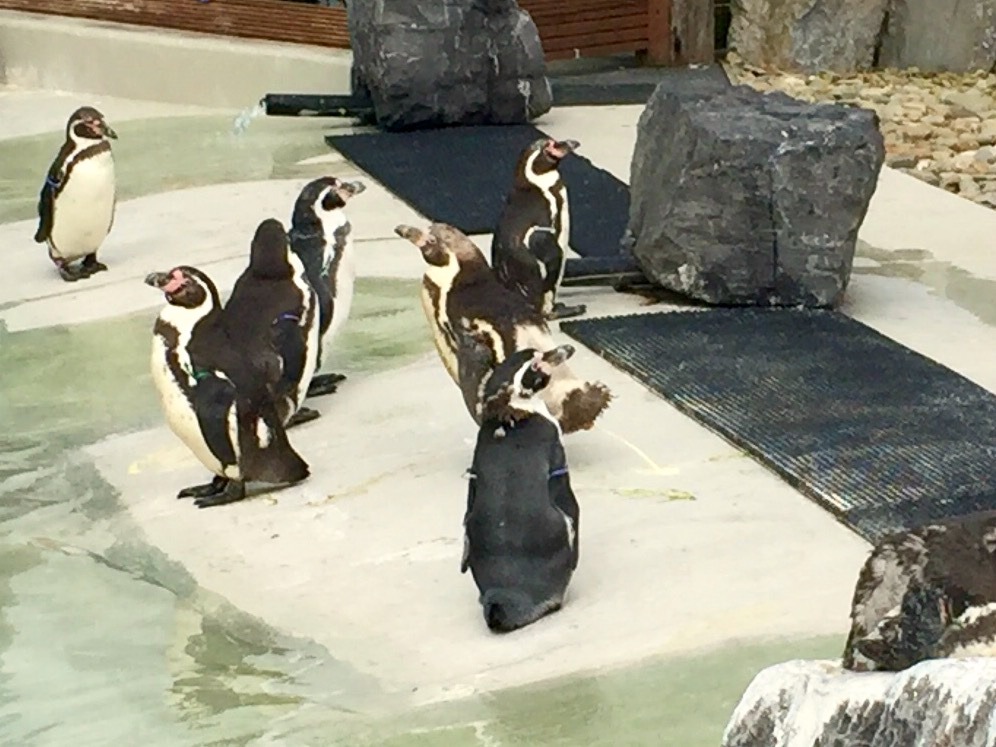 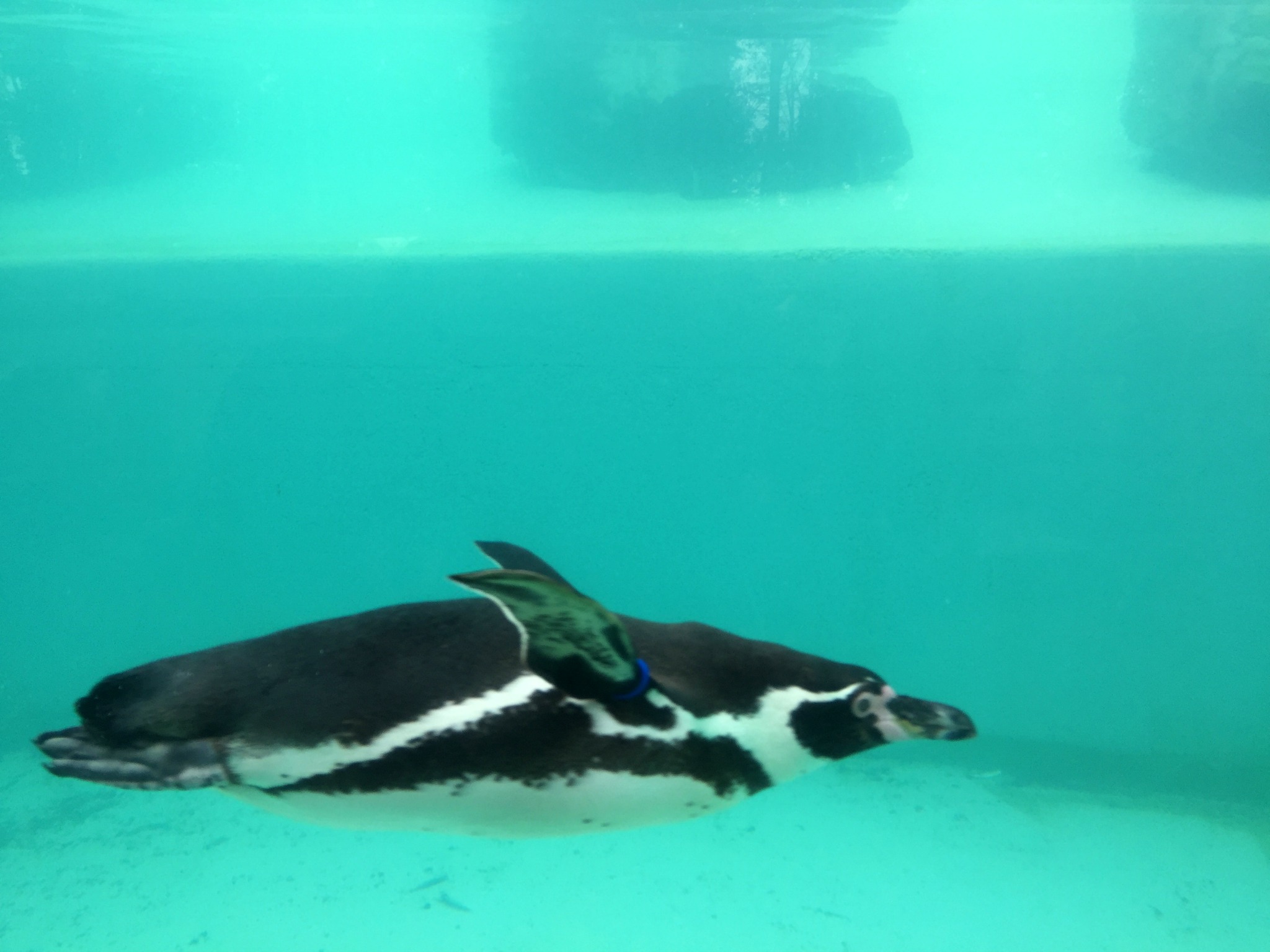 The Humboldt penguin is another species at risk of extinction, with the biggest threat being the destruction of their habitat, through the harvesting of guano, their nesting material, as a fertiliser. Over-fishing is also affecting their food source, with climate change another threat. Most of the penguins were stood on the land area of their enclosure, with just one swimming under water – which can be seen through the viewing glass.

We also loved the meerkats, who seemed just as excited to see us as we were to see them, with several of them perched on their hind legs, huddled at the top of one of their burrows. 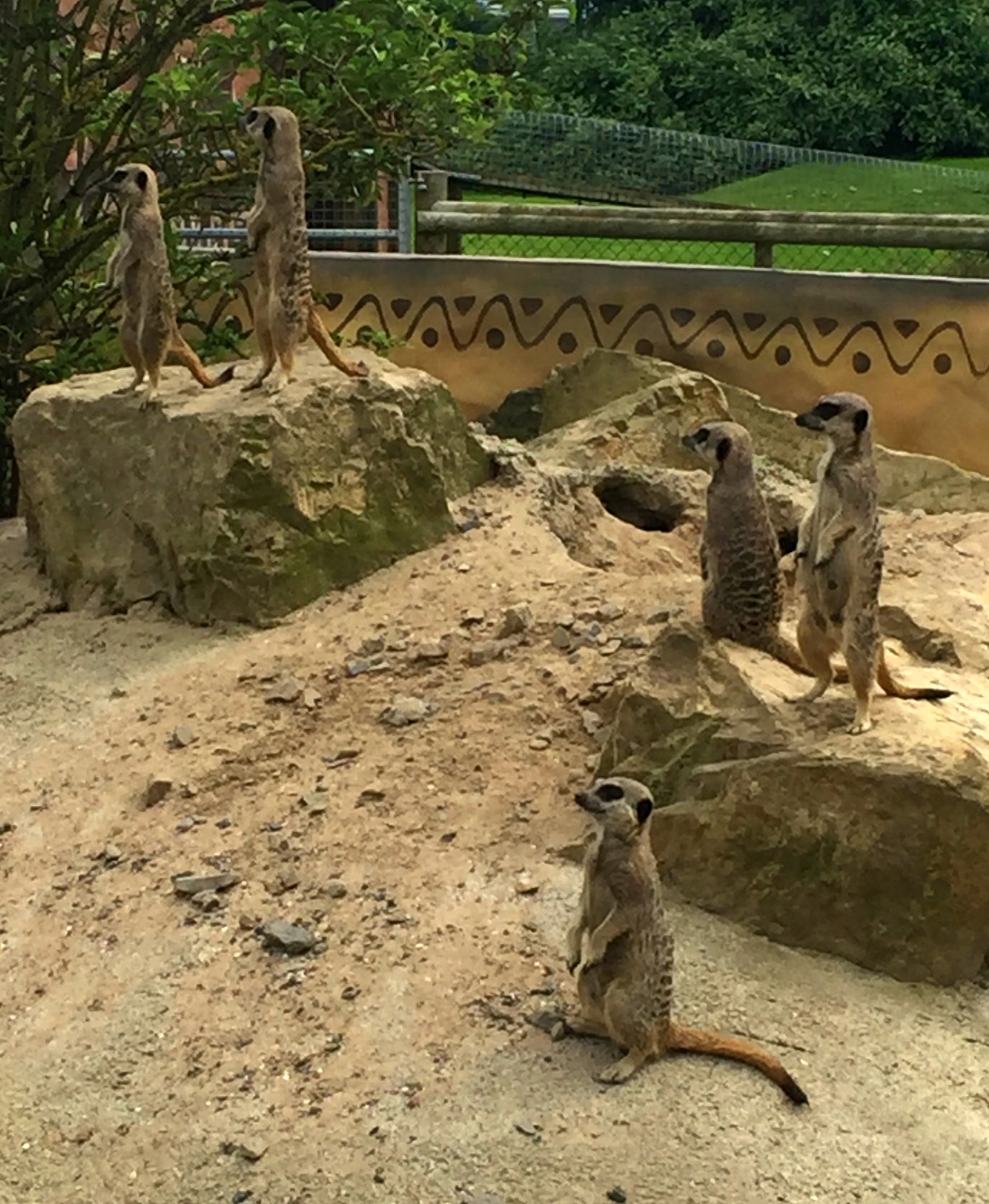 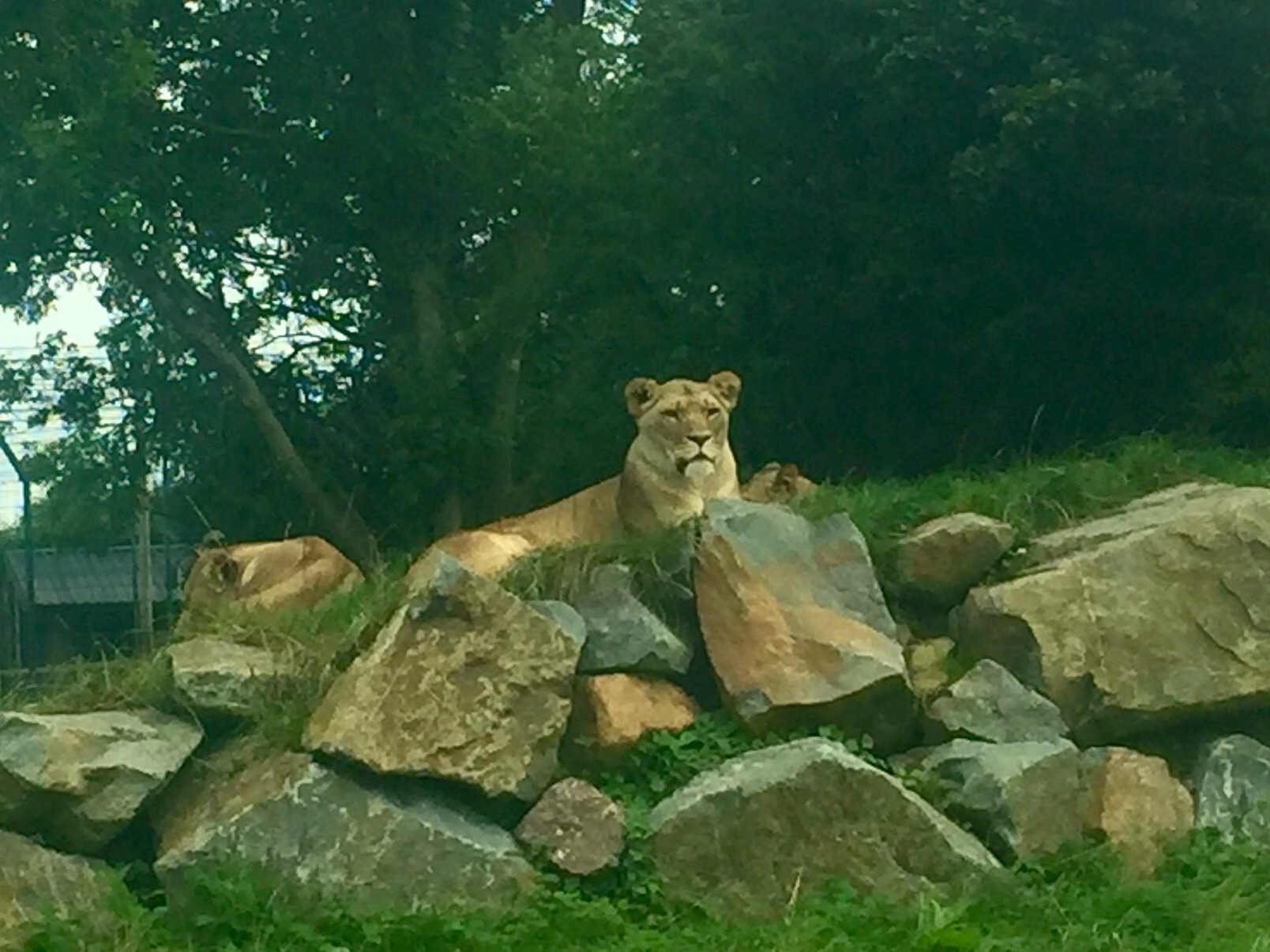 The lions were so majestic – at one point the male and one of the females were play fighting around the enclosure. The rest of the time they just seemed to spend lying still watching the world go by.

Other zoo highlights for us were the flamingos, the camel, the lemur, and the emu.

We could have spent the whole day on the zoo area alone – but there’s so much more at Folly Farm. When we arrived, we spent an hour or so in the Jolly Barn. This used to be the farm’s dairy parlour, back in the day when it was a working farm. But it’s now home to all manner of farm animals. 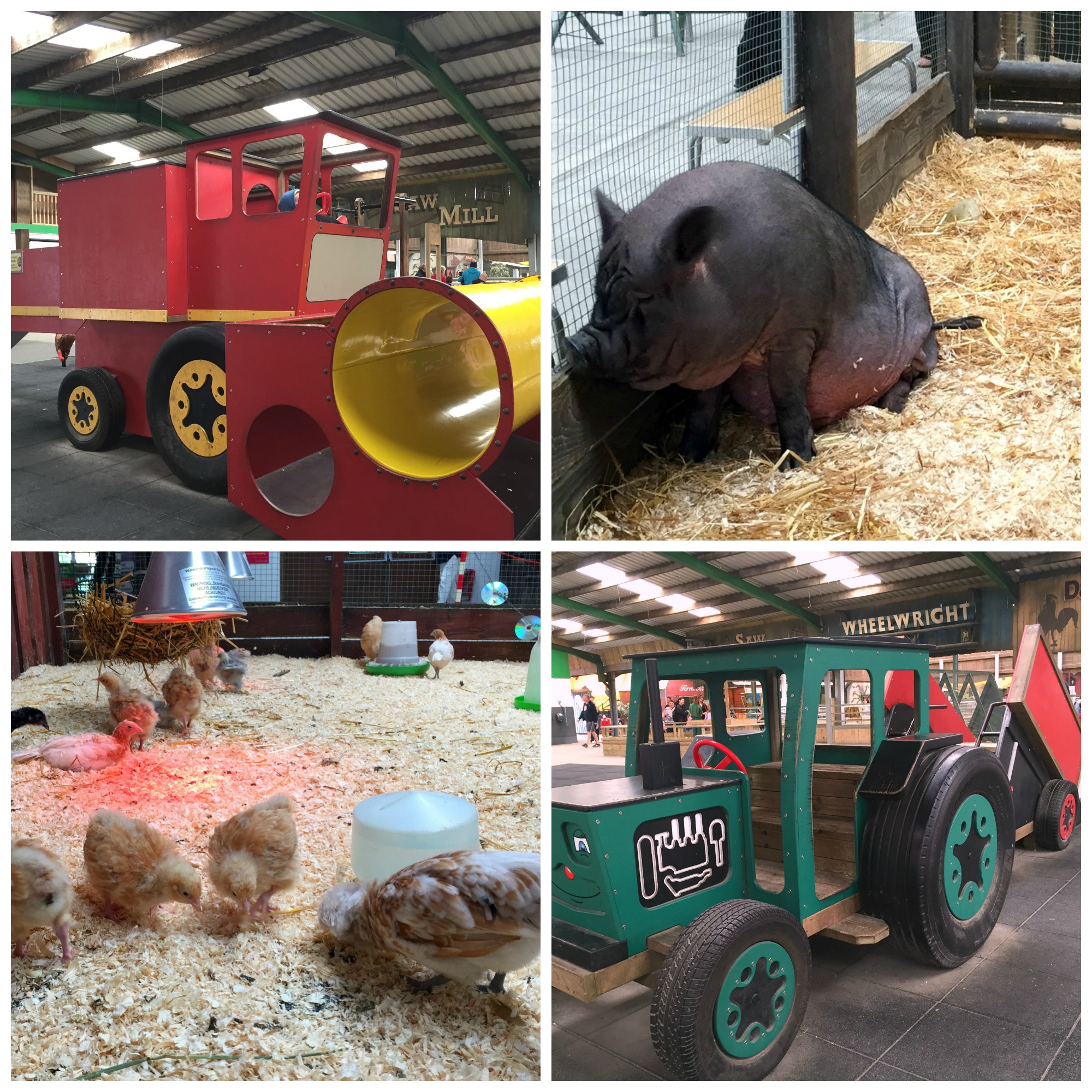 There are opportunities throughout the day to meet and pet animals, including guinea pigs, rabbits, cockroaches and ferrets, as well as hand milking a goat and seeing the miniature pigs on their daily walk. The barn also has two tractor-themed play structures, life-size model cows to hone your milking skills, and farm-themed board games stations. For more farm animals, you can catch the free land train over to the paddocks, on the vintage-themed tractor and trailer. The paddocks are home to llamas, alpacas, pigs, goats and sheep – although we ran out of time on our visit to head that way.

Like most family attractions, Folly Farm is undoubtedly better in the dry weather – but there’s a lot under cover, which means you could still have a great day there in the rain too. You could easily spend a couple of hours in the barn, before visiting Folly Interactive, where you can see snakes, tortoises, macaws, armadillos, sloths and fruit bats.

There’s also the Carousel barn, which is home to an indoor fairground featuring vintage rides, and a huge soft play area.

The soft play is all free, with different structures for toddlers, under 6s and bigger children. There’s plenty of seating for parents wanting to grab a coffee while their children play, as well as fast food dining options. 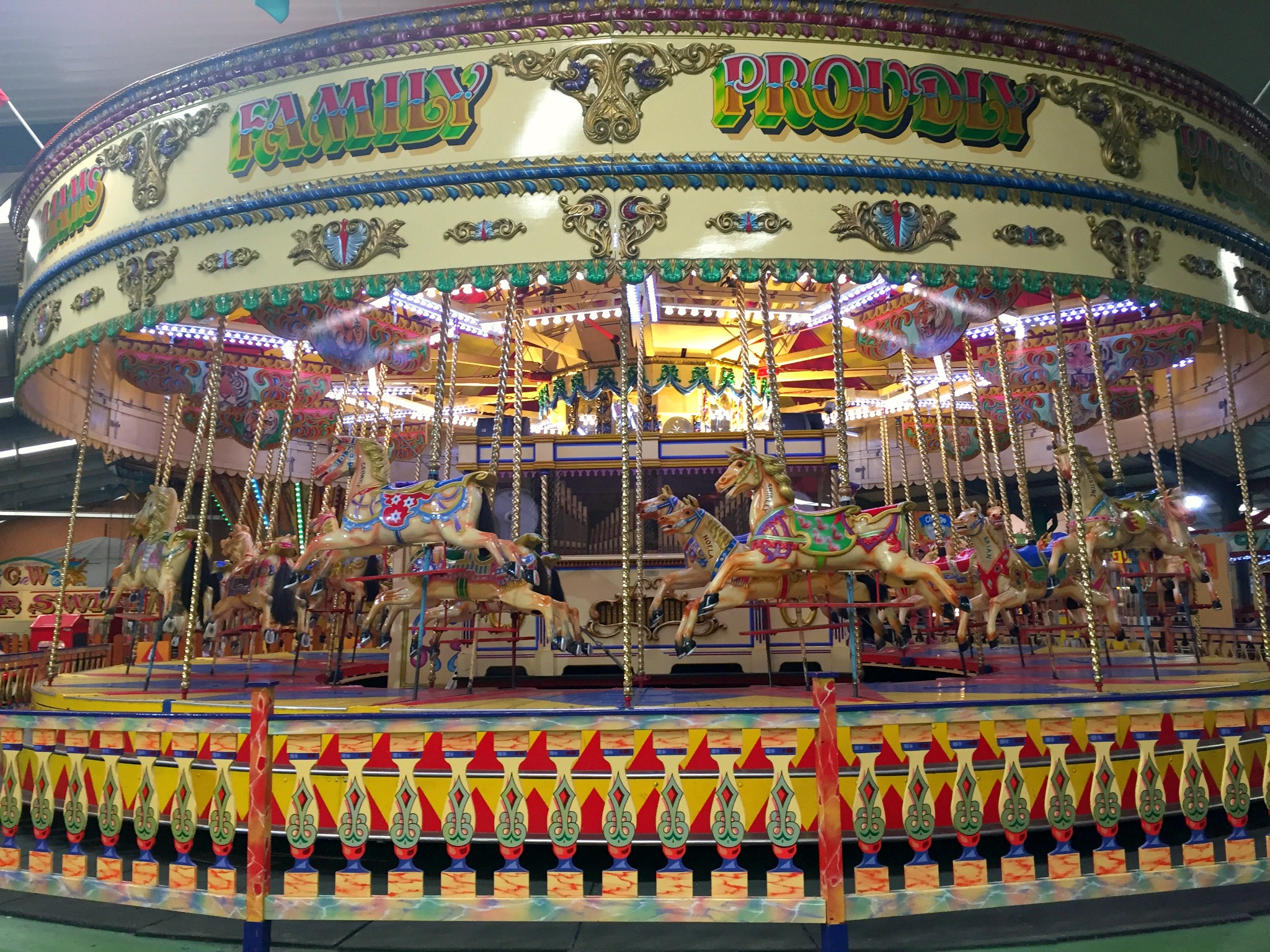 You do have to pay for the fairground rides, but at 50p a ticket, and with most of the smaller children’s rides costing just one ticket, it’s not too expensive. Little Miss E and Little Man O absolutely loved the mini waltzers and the junior carousel, where children sit on buses, fire engines and police motorbikes, while Toddler Boy I loved the mini car track. My favourite was the beautiful Golden Gallopers carousel with its beautiful horses, while Cardiff Daddy loved taking our eldest two on the dodgems – although I think he missed the signs around the track about not deliberately bumping into people!

The carousel barn is also home to the Wurlitzer organ, which plays vintage songs twice-daily, and the Follies Theatre, where we saw a fantastic (and free) magic show with Jugglestruck, which kept all three of my children entranced for 40 minutes or so. Check the website for dates of when he and Matt The Magic Man are performing during the school holidays and at weekends. There are also family fun days taking place over the summer, which see themed crafts and games sessions on offer too. 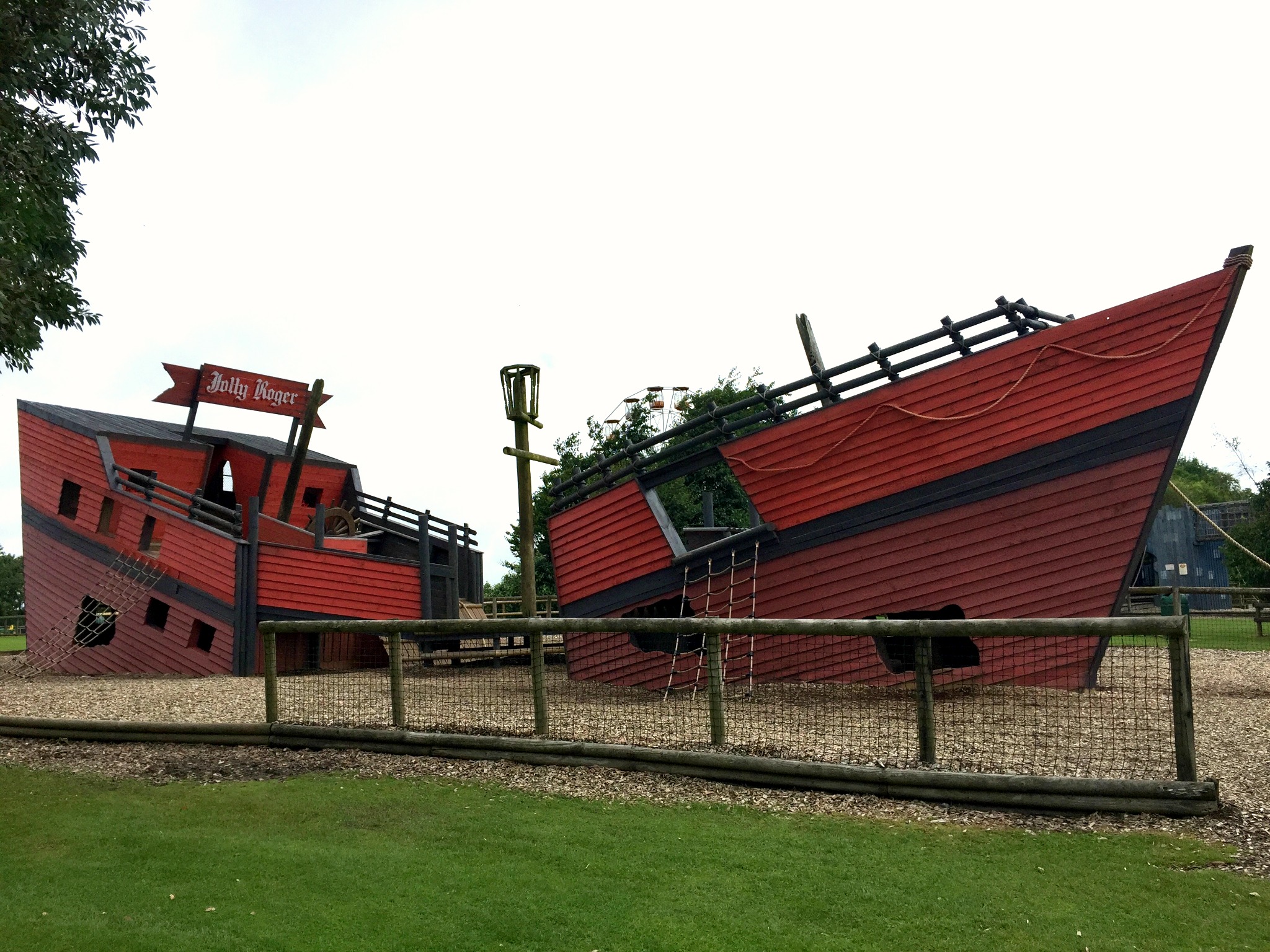 There are plenty of play options outside too. Highlights include giant wooden pirate ships, a fortress and a dragon play structure, with slides, tunnels, climbing nets and so on, as well as the Destruction Playground, a construction-themed sandpit area full of diggers and large wooden play equipment, plus a smaller sandpit with buckets and spades for the youngest visitors.

For a small cost, you can ride the go-karts and the CAT diggers (four tokens per kart/digger, with a maximum of two people per vehicle). We didn’t go on either of these.

But we did have a ride on the 25-foot Pembrokeshire Wheel, which gives the most amazing views across the park and surrounding area. 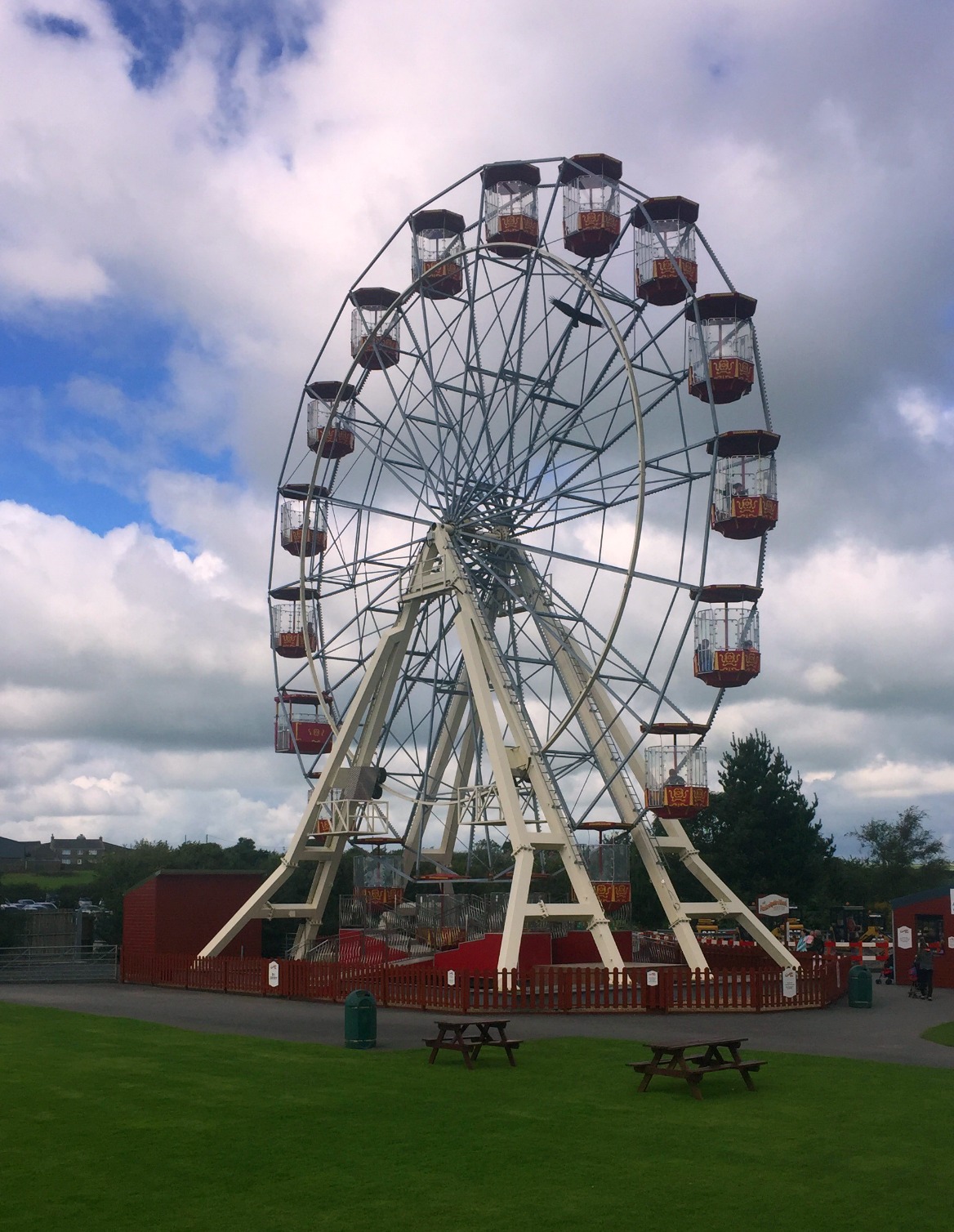 We had such an amazing day, and I’m honestly not just saying that because we received review tickets. If we’d been staying for longer, we would definitely have come back for another day, as there were things we didn’t get to do, or things we would have liked to have spent longer doing. Luckily, Folly Farm offers discounted return tickets if you visit again within a week. We also loved how well-kept everything felt, which is not easy with an outdoor attraction of this size. It’s also big enough that even when it’s busy, which it was on the day we visited, it doesn’t feel over-crowded.

As Miss E said, “Best day ever”. And it’s not just her who thinks that, with Folly Farm having received Trip Advisor Certificates of Excellence Awards, and won the Best Day Out award at the National Tourism Awards for Wales three times.

We can’t wait to go again! 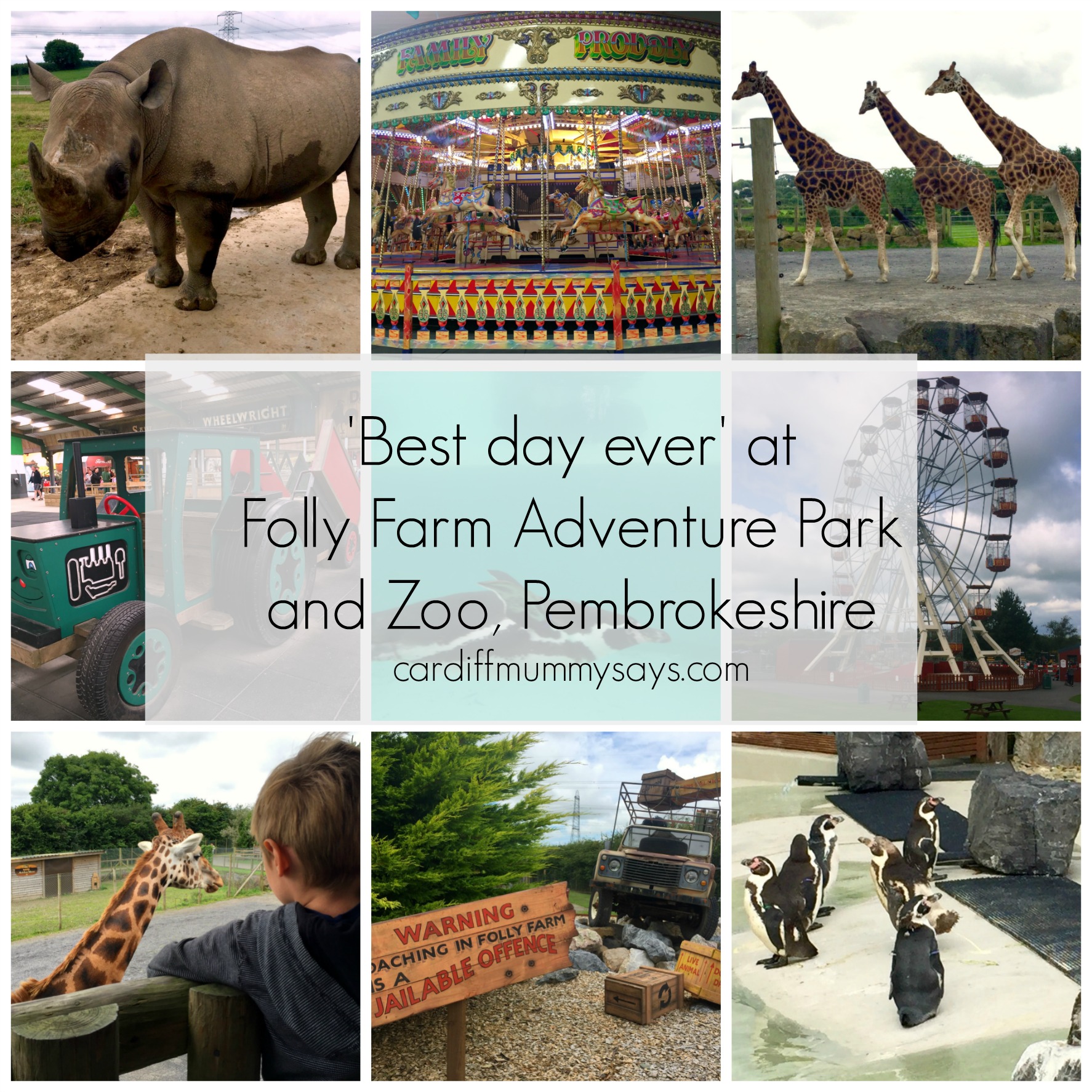 Fancy a trip to Folly Farm? Cardiff Mummy Says has a family ticket for four to give away to one lucky reader.

For a chance to win, just answer this simple question and leave your response on the Cardiff Mummy Says Facebook page.

Q. Name any three zoo animals to be found at Folly Farm.

Deadline for entries is 11pm, Sunday 14th August 2016. The winner will be chosen at random from all correct entries and notified via Facebook.

The competition prize ticket will allow four people complimentary entry to the park only. Funfair and rides at a reasonable extra charge. The tickets have a redeemable value of 0.001p. The winner will be emailed a ticket, which they will need to bring with them to gain entry. The ticket cannot be exchanged or used against any other offer.

The prize tickets are valid on any day Folly Farm is open, until 31st December 2016.