When the sun is shining, you can’t beat a UK seaside holiday.

But when the sun isn’t shining? Well, you just have to put on your best smile and keep repeating the mantra ‘there’s no such thing as bad weather, only the wrong clothing’.

And such is the situation we found ourselves in when we headed to Pembrokeshire last week, where it was cold, wet and windy for most of our holiday.

My aunty had kindly let us stay in her caravan just outside Tenby. When we went there two years ago, we had the most amazing sunshiny week. In my mind, I was planning lazy days on the beach, meals in pub beer gardens while wearing floaty dresses, and a nice cold glass of white wine sat outside the caravan after the kids had gone to bed.

In reality, it was miserable for more than half the week. But, as we told the children as we drove down the motorway in the hammering rain, we can either sit in the caravan and moan about it or we can not let the weather get to us and enjoy ourselves anyway.

We headed to the cinema in Carmarthen en route from Cardiff to the caravan, to see Finding Dory and have some lunch, which was a good move as the rain did not stop the entire day. You can imagine how much fun unloading the car was in that! 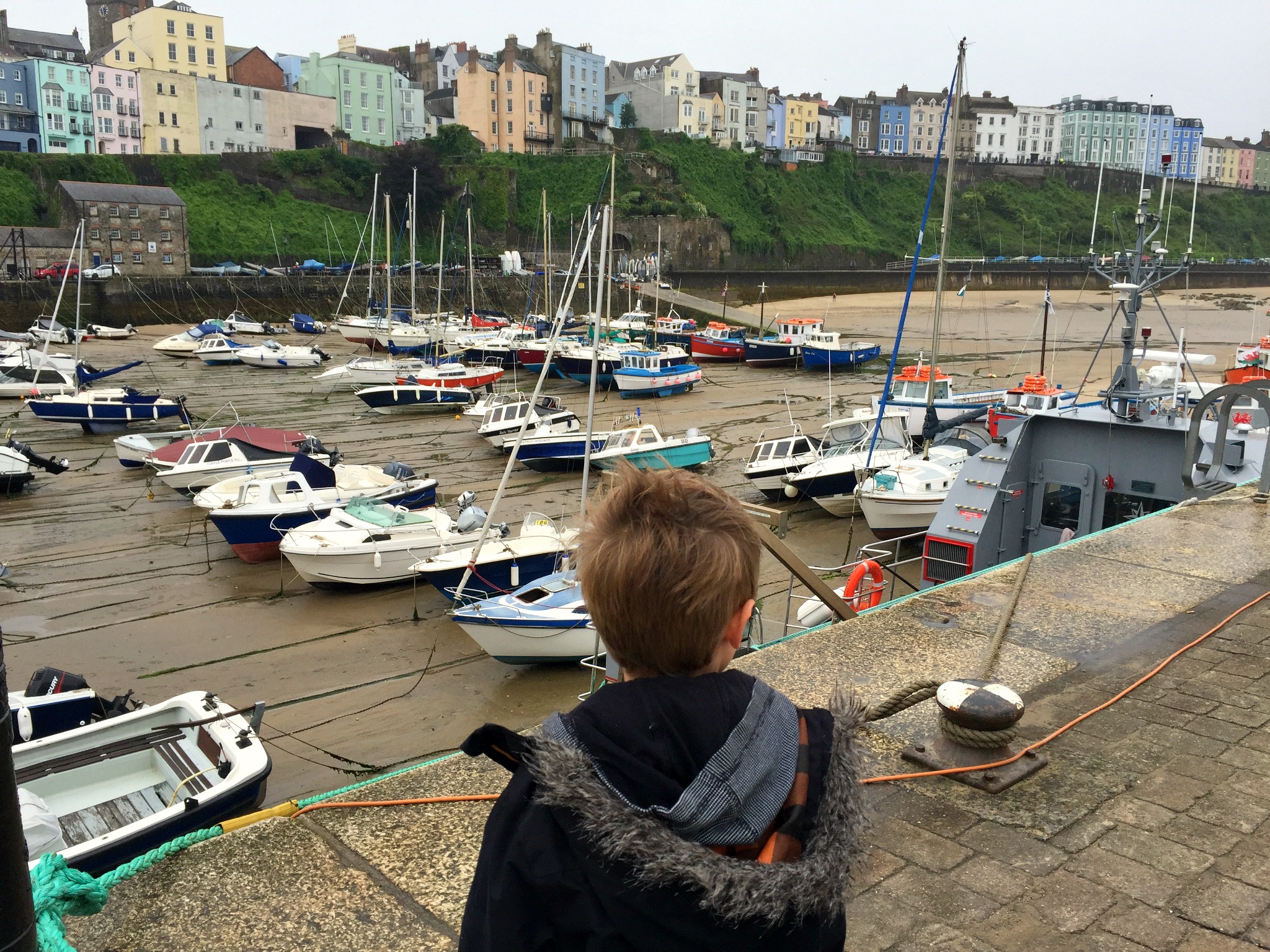 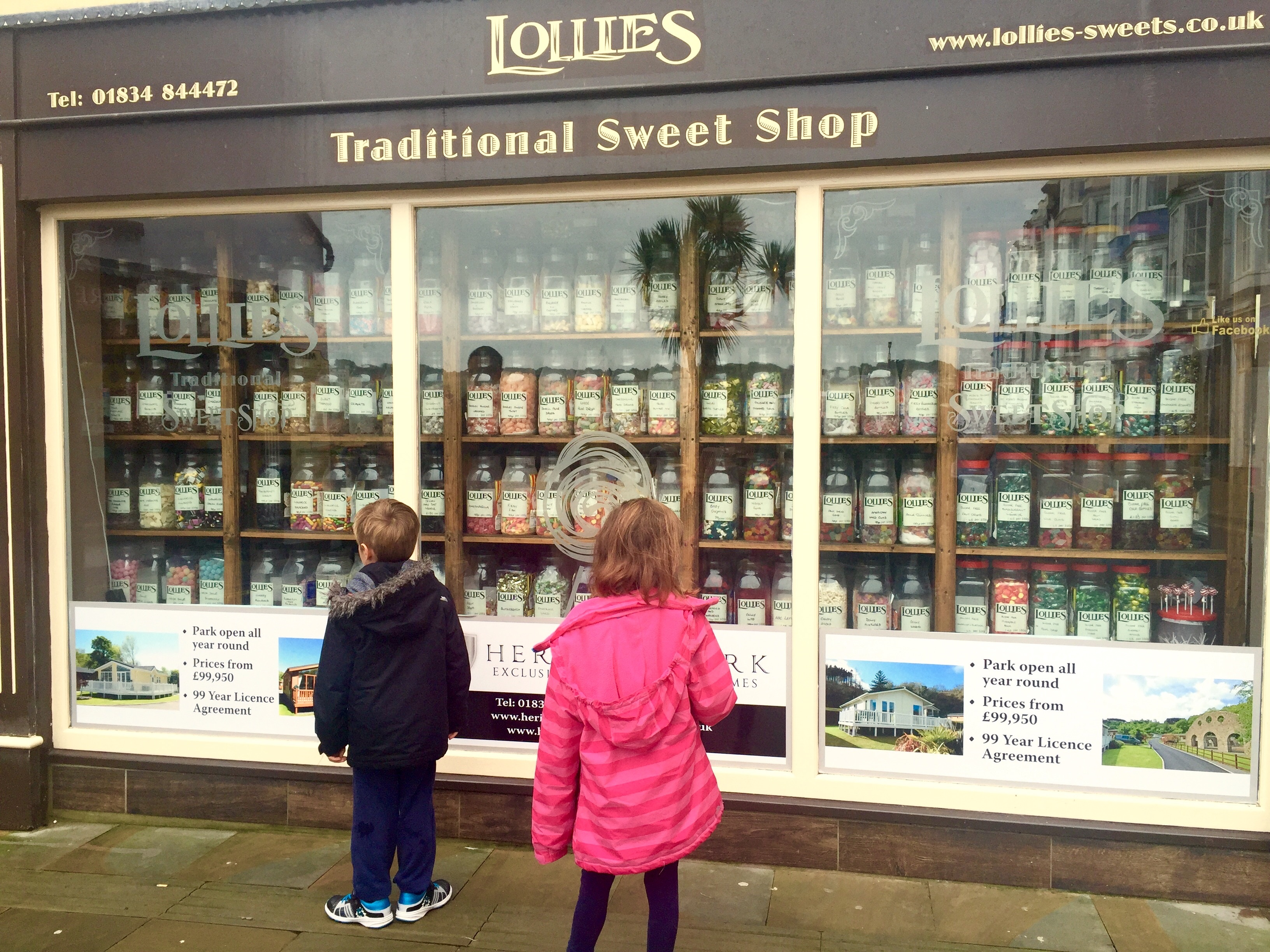 There was more rain the following day, so we walked around the harbour to see the boats, before visiting Tenby Museum, which was a little pricey at £5 per adult, although the ticket lasts all year and children are free. It was really family-friendly and a good place to pass an hour. Our favourite exhibits were the penny farthing bicycle, the knight’s armour and the pirate corner, where we discovered more about Barty Black, a local pirate who commanded a squadron of four vessels, was in control of 508 men, and took around 400 vessels in just a couple of years before he died in battle. 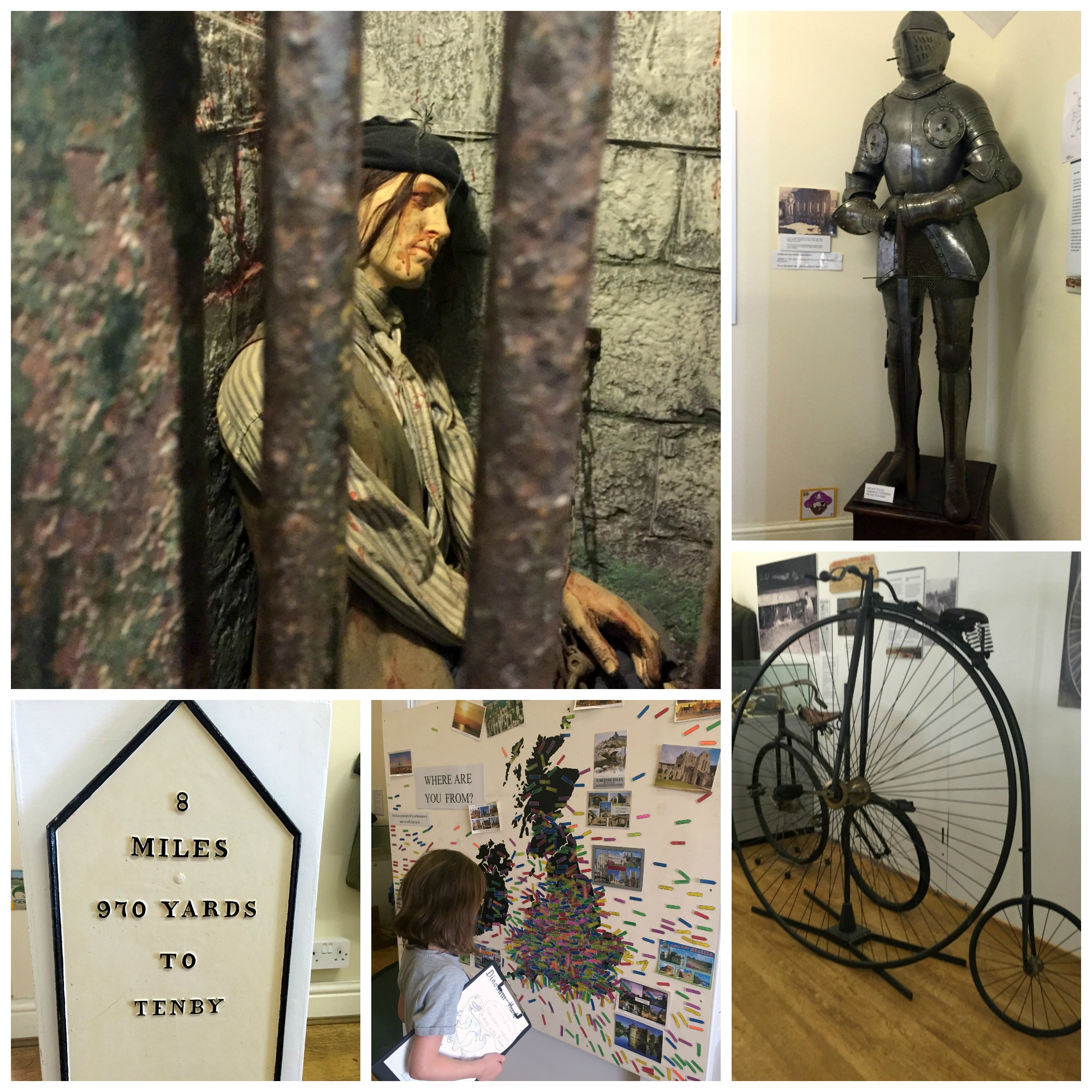 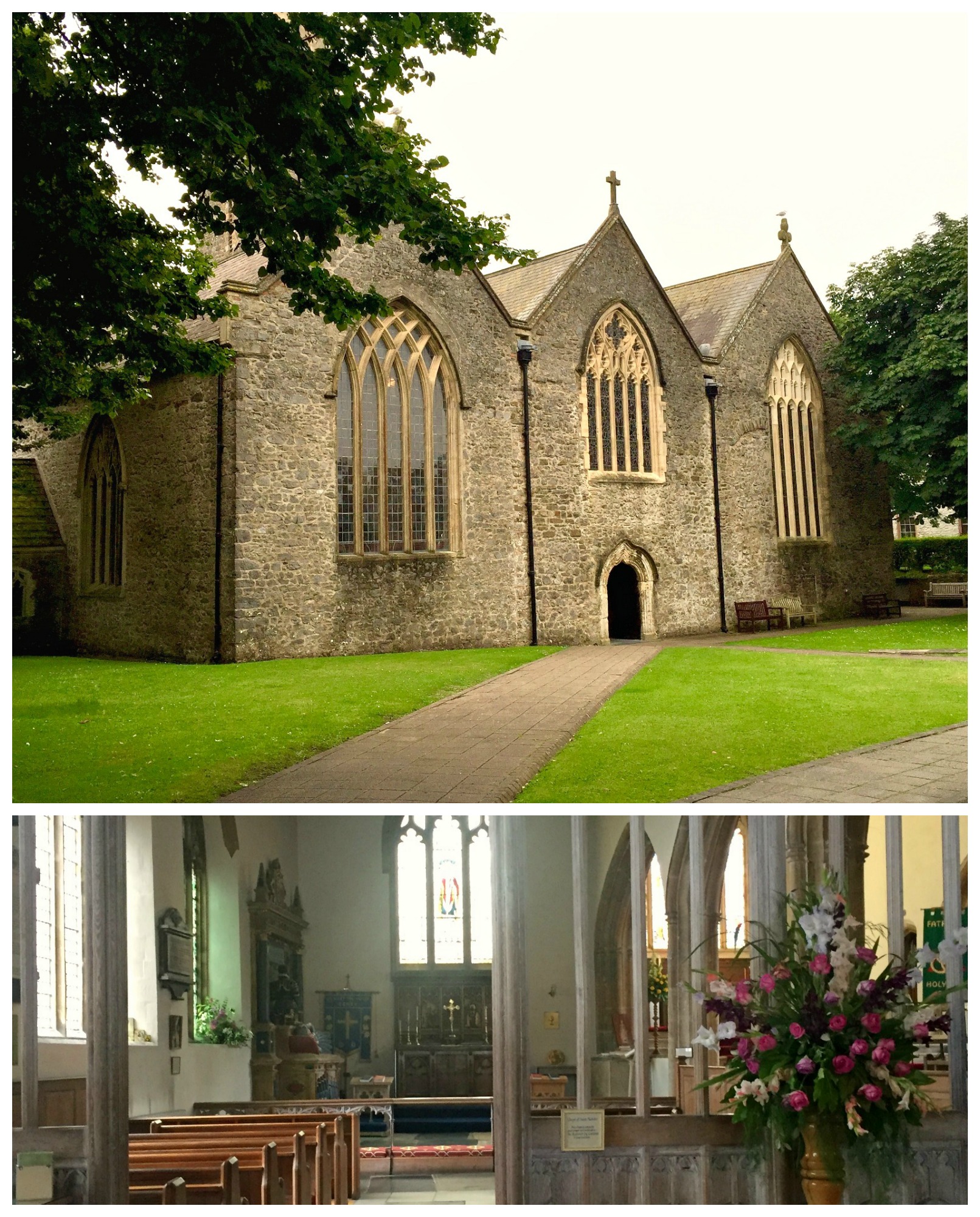 We also popped into St Mary’s Church, which was been in the town for more than 800 years, as well a quick nose around the vintage market area on Upper Frog Street.

And then the rain stopped – so we grabbed some sandwiches from Gregg’s and headed to the beach. Admittedly in hoodies/winter coats, but the beach nonetheless. Tenby has two amazing sandy beaches – North and South. We were at South Beach with its mile and a half of golden sands and amazing caves and rock pools to explore. The beach was amazingly busy for such a rubbish day weather-wise. Tenby is a really holiday hot spot in the summer, with tourists swelling its 5,000 population to around 10 times that. It was great to see that everyone had had the same idea as us, in just getting on with it and making the most of the beautiful surroundings, even in the rain. 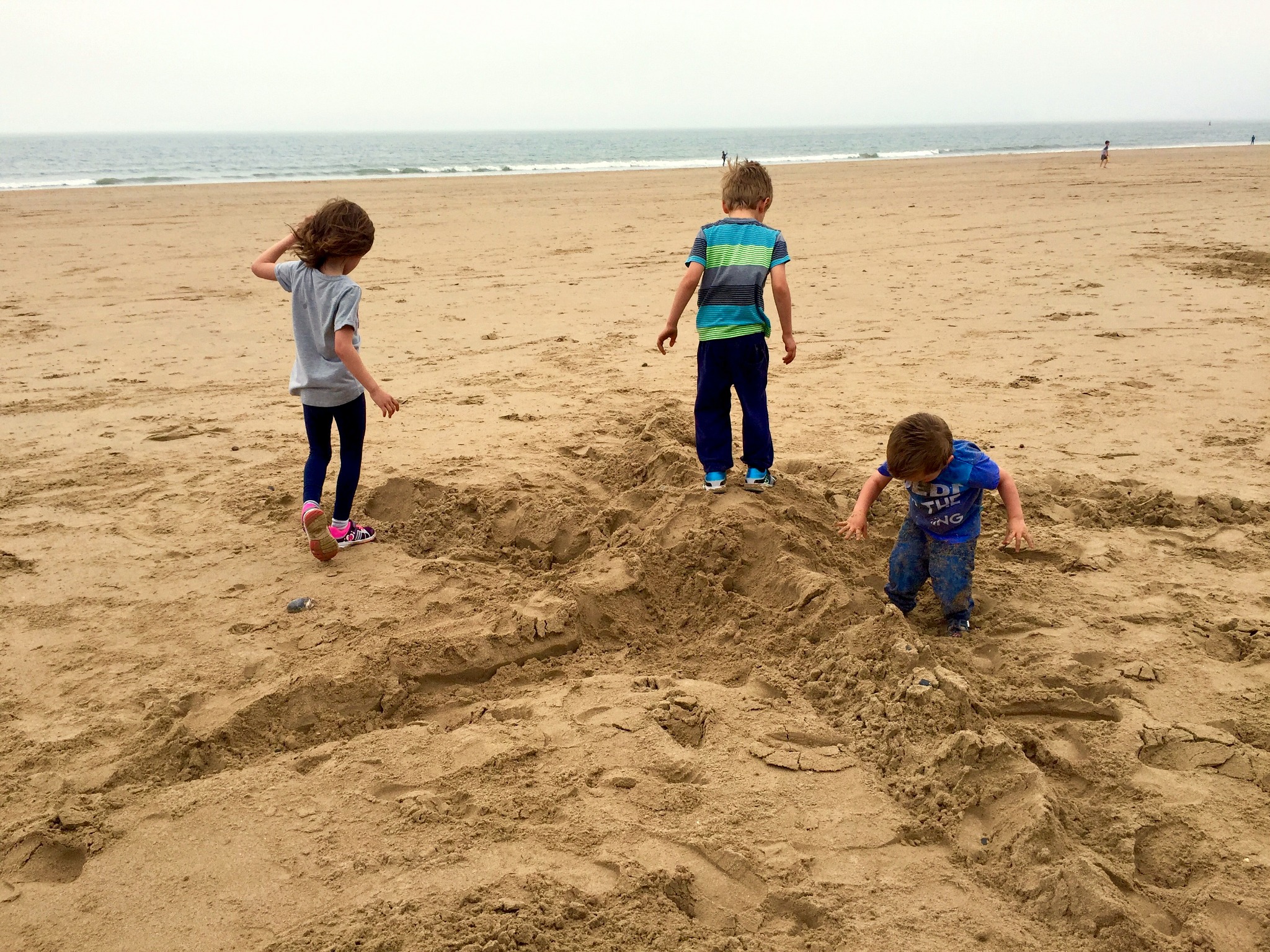 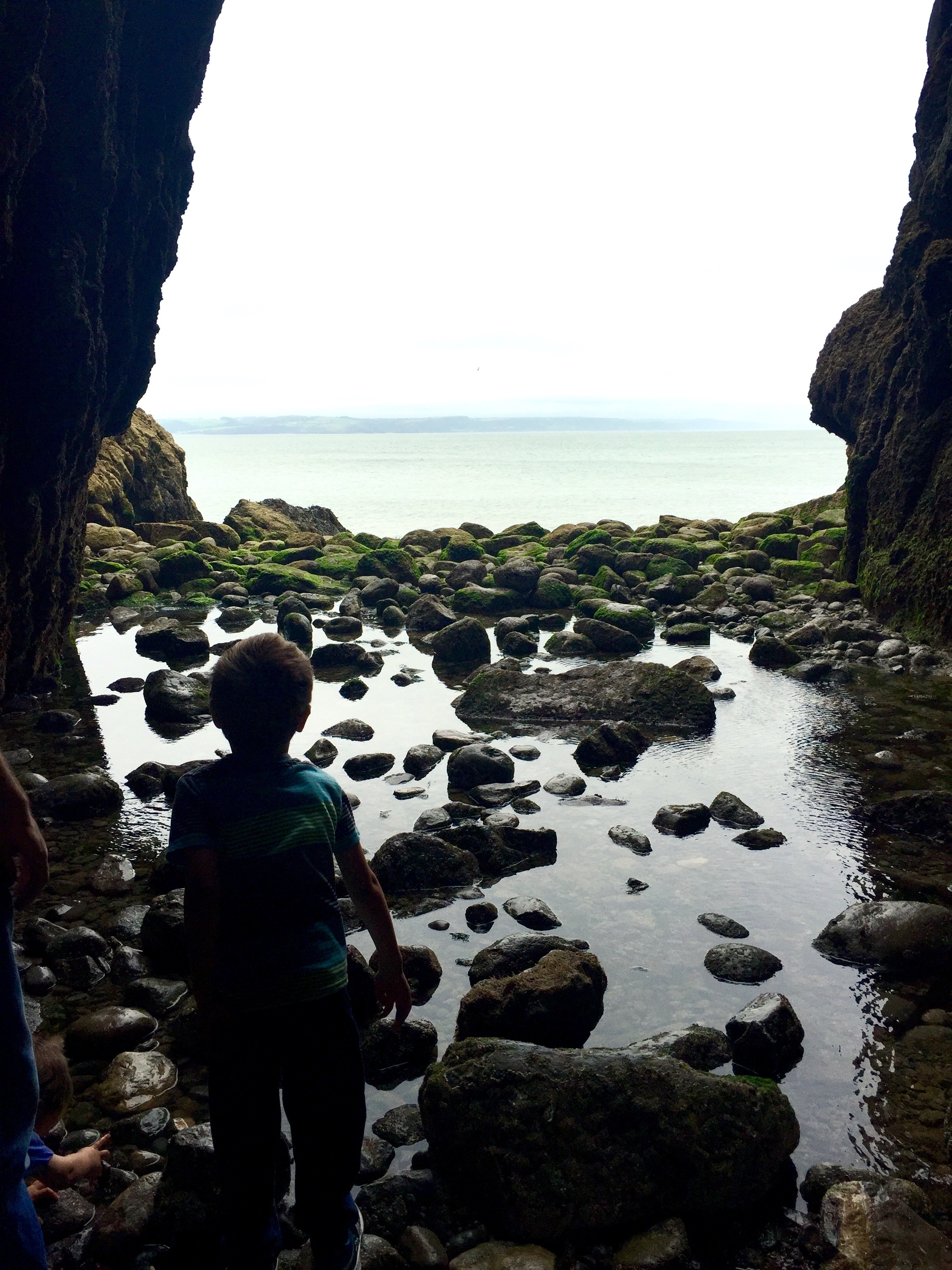 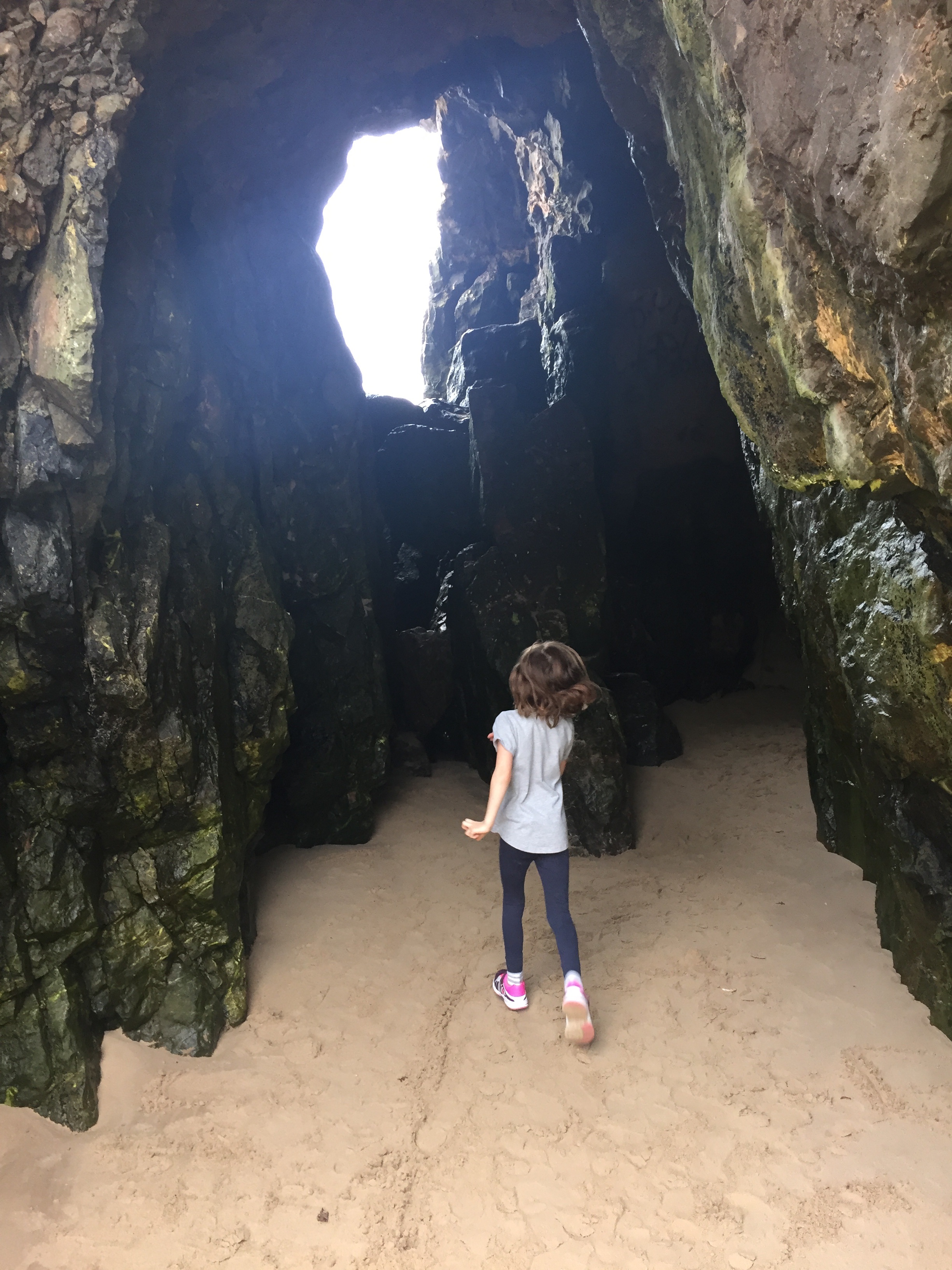 We stayed on the beach for around two hours, exploring the caves, finding crabs and other rock pool creatures, dodging the waves and building sand castles. It might not have been the sunny beach day we’d had in mind, but we honestly had such a fun afternoon.

We spent the next day dodging the showers at Oakwood. The theme park has definitely seen better days and felt a little shabby around the edges, but we were there from 10am-4.30pm and my children thought it was amazing.

A few of the rides were closed either due to maintenance or due to the rain. I would have been disappointed if we’d spent £71 on tickets for the four of us (Toddler is still free until he’s three) but we’d exchanged £26 of our Tesco vouchers for our tickets, so it felt like good value to us. 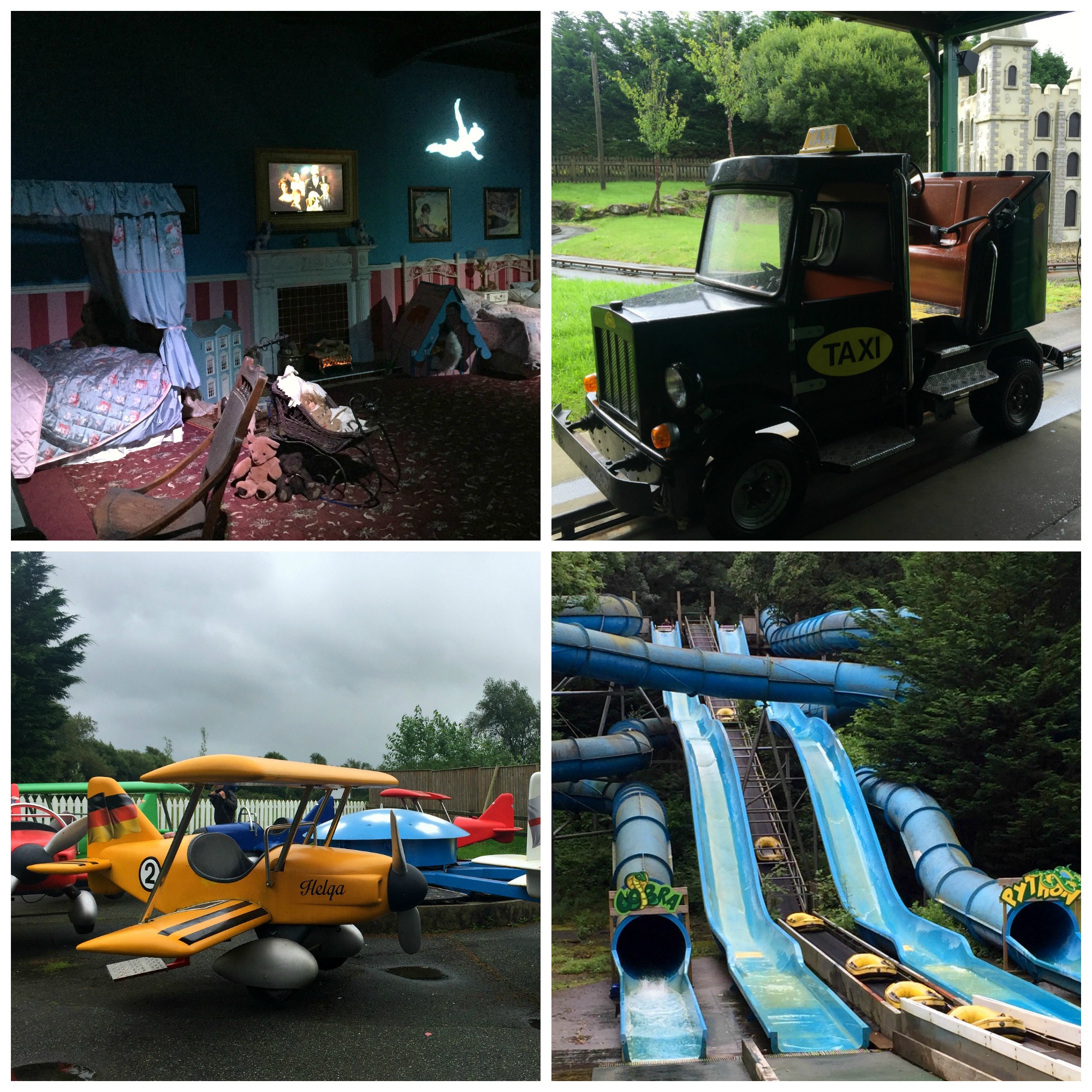 Neverland, the Peter Pan-themed area of the park, is perfect for under sevens, and especially perfect for my kids who adore the film and who remember in clear detail coming here two years ago.

Tink’s Flying School was broken and the crocodile roller coaster was shut for large chunks of the day due to the rain, but we still ended up spending a couple of hours in this area. My children loved the London cab ride, the aeroplanes and the log flume. This is the second time we’ve been to Oakwood as a family and we’ve never really had to queue in Neverland. In fact, we frequently stayed on the rides for two or three goes in a row, which the kids thought was the best thing ever.

When it rained, we headed into Neverland’s indoor soft play or the Darlings’ house, which depicts some of the scenes from the story, such as Wendy, John and Michael sleeping in the nursery and the view flying over London to Neverland.

Next to Neverland is Circusland, which had a few rides for younger children, such as teacups and a carousel, as well as an arcade area with 2p machines. Again, it could do with a good lick of paint but there were no queues and it kept my three entertained.

At 6, 4 and 2, my children are too small for a lot of the showcase rides in the main park, and the queues were longer here, but Miss E and Little Man both went on the waterslides with Cardiff Daddy, and loved it (despite the half hour queue).

Typically, as we were leaving, it started brightening up so we headed to the Carew Inn for food. Just a 10-minute drive from Tenby, we first came here two years ago and had the most amazing evening sat in the sunshine in the beer garden until around 9pm while the kids played in the play area (filled with Little Tykes slides and climbing frames and great for younger children). Just like last time, we found the staff were so friendly, the food came quickly and the portions really generous. We sat inside for our food this time as it was a bit on the windy side but my children still had fun playing in the park before and after their food. 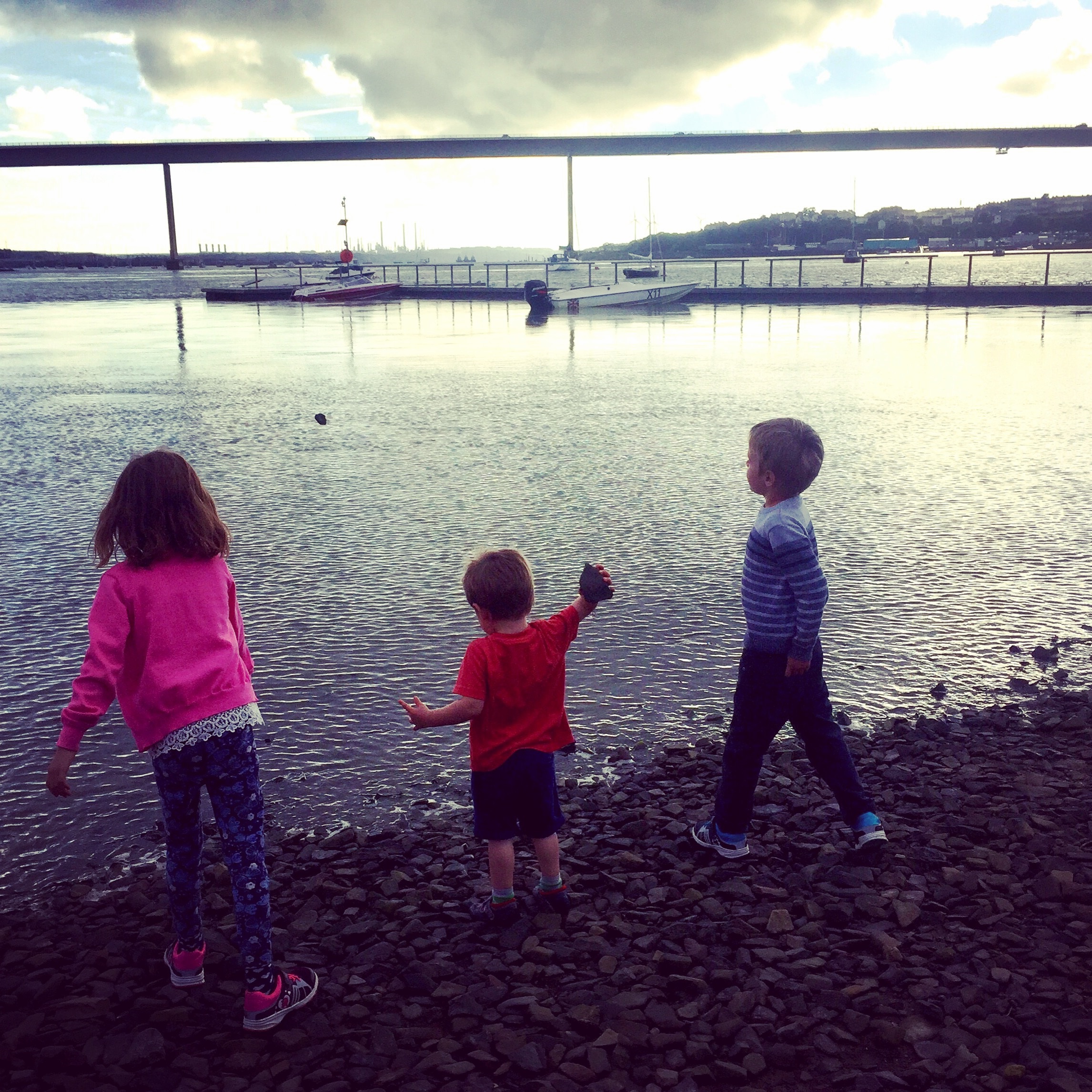 We also had a great evening meal at The Jolly Sailor, in Burton, on another night. The pub sits on the Cleddau River, across the river from Pembroke Dock. The beer garden leads right down to the pebbly shoreline, where we had fun throwing pebbles into the water, and walking down the jetty to see the boats.

One night, we had chips on the sea front at Saundersfoot – you’ve got to have chips at the seaside, haven’t you?! Even if you are wearing your winter coats! Another night we had takeaway pizza, again on the sea front at Saundersfoot. The weather had a habit of being rubbish in the day but brightening up in the early evening, so we were determined to make the most of the sunshine, playing football on the beach and digging holes in the sand before the low tide covered the beach completely. 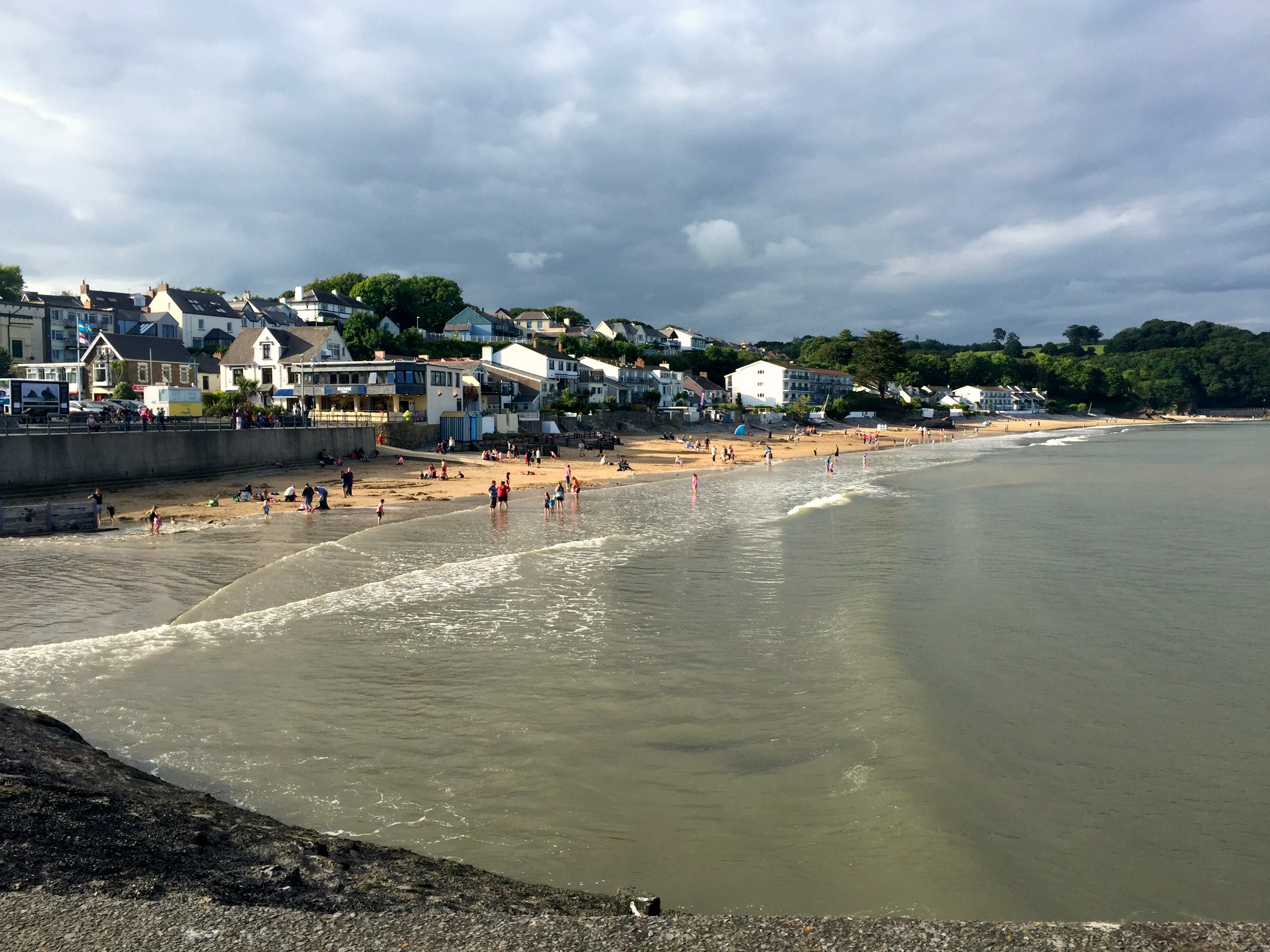 Saundersfoot is a really special place to me, as it was the first place Cardiff Daddy and I went away together, as skint students, staying in a grotty B&B, where we’ve stayed for various special occasions, and where he proposed to me. As you can imagine, we absolutely love going back there with our children.

During our stay, we were also invited to review Folly Farm and Tenby Dinosaur Park, which I’ll be writing about separately later in the week.

We spent our final day on Broad Haven Beach South, an absolutely stunning sandy bay, with beautiful sand dunes to explore, as well as caves and springs, and beach pools.

We parked in the National Trust car park at Bosherton Lakes (£5 all day or free for members). From here, it’s around a mile walk down to the beach via the most beautiful ponds filled with lily pads. The walk would be difficult for buggies and wheelchairs (although we did see some people managing with light-weight strollers) and there is a car park closer to the beach. The route we took was gorgeous and well worth the extra effort. 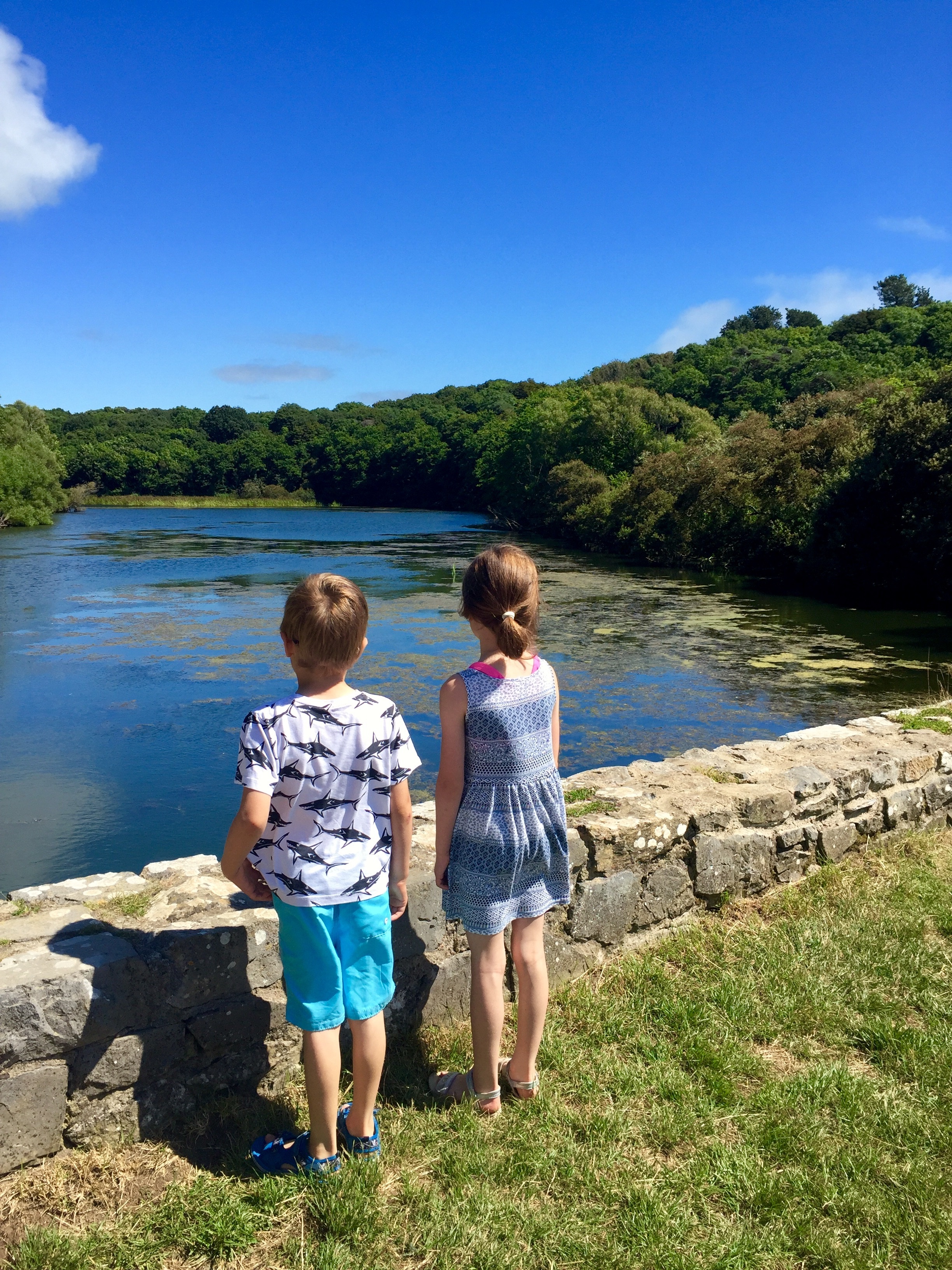 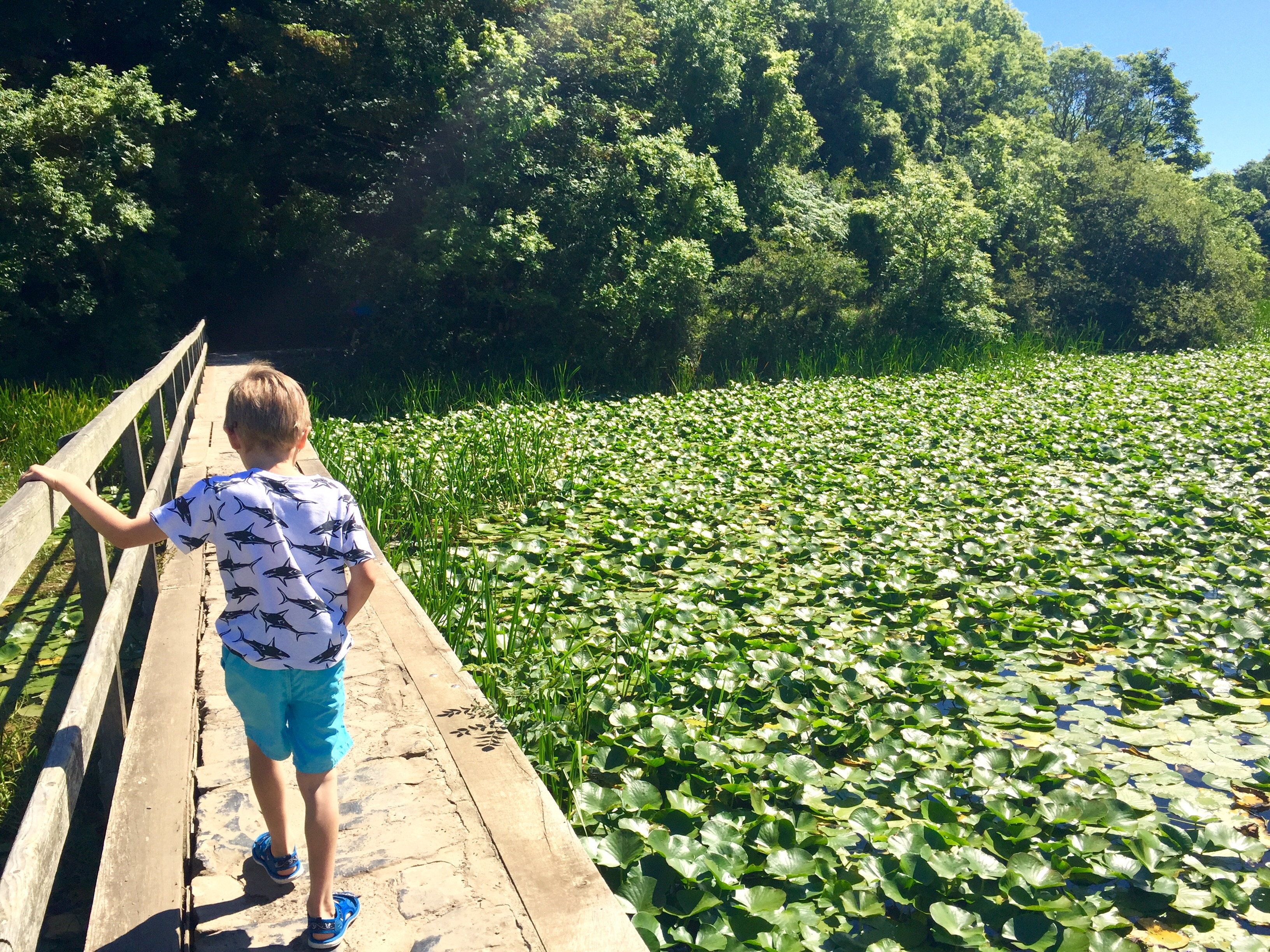 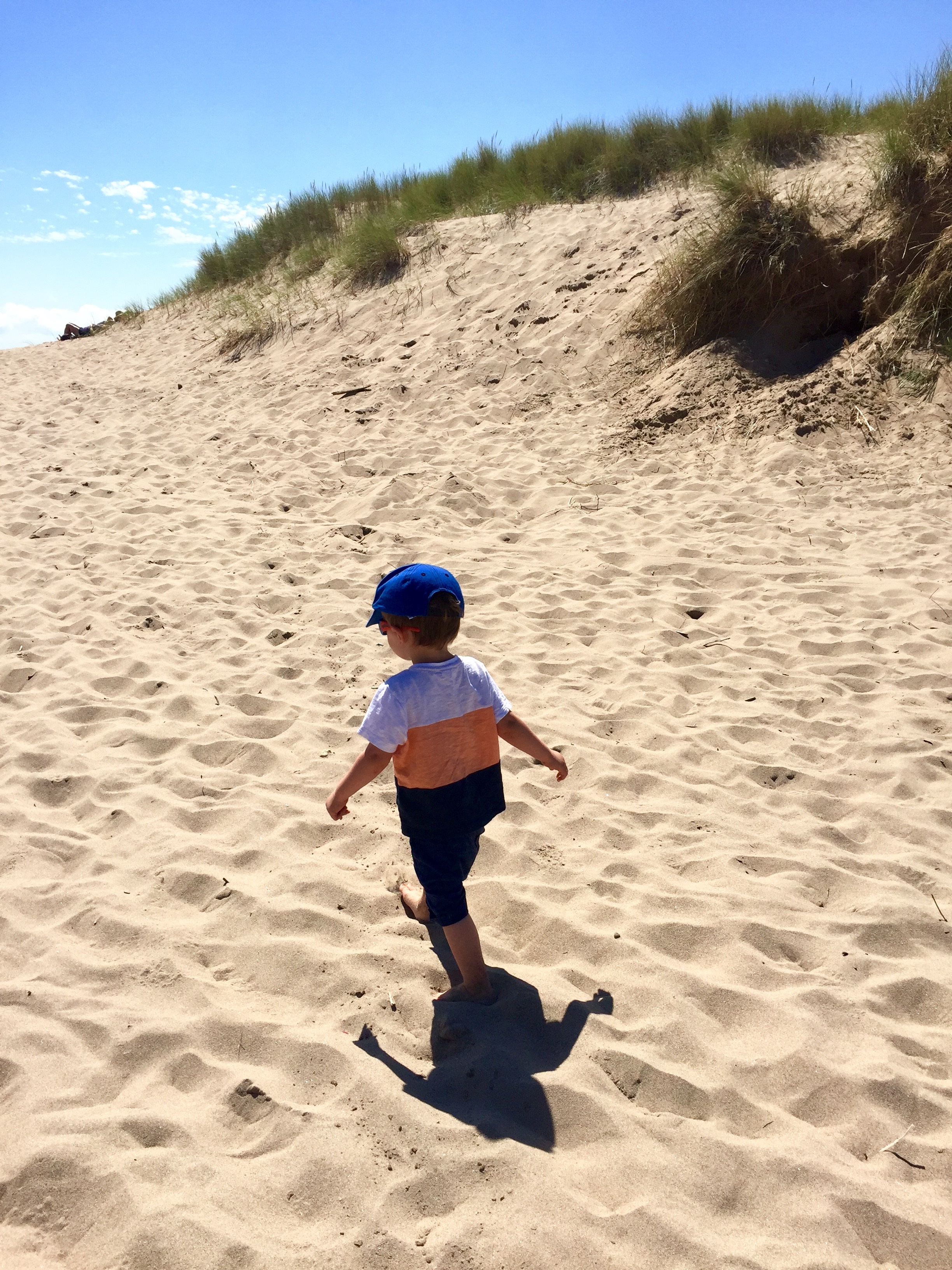 We had about an hour of glorious sunshine on the beach where we built sand castles, paddled and jumped in the sea, explored the caves in the rocks, looked for sea creatures in the rock pools, and ran around the beach. We loved the little beach pools, which were warmer than the sea itself and great for children to paddle in. “A proper day at the beach,” as Little Miss E said as we sat down to eat our picnic. 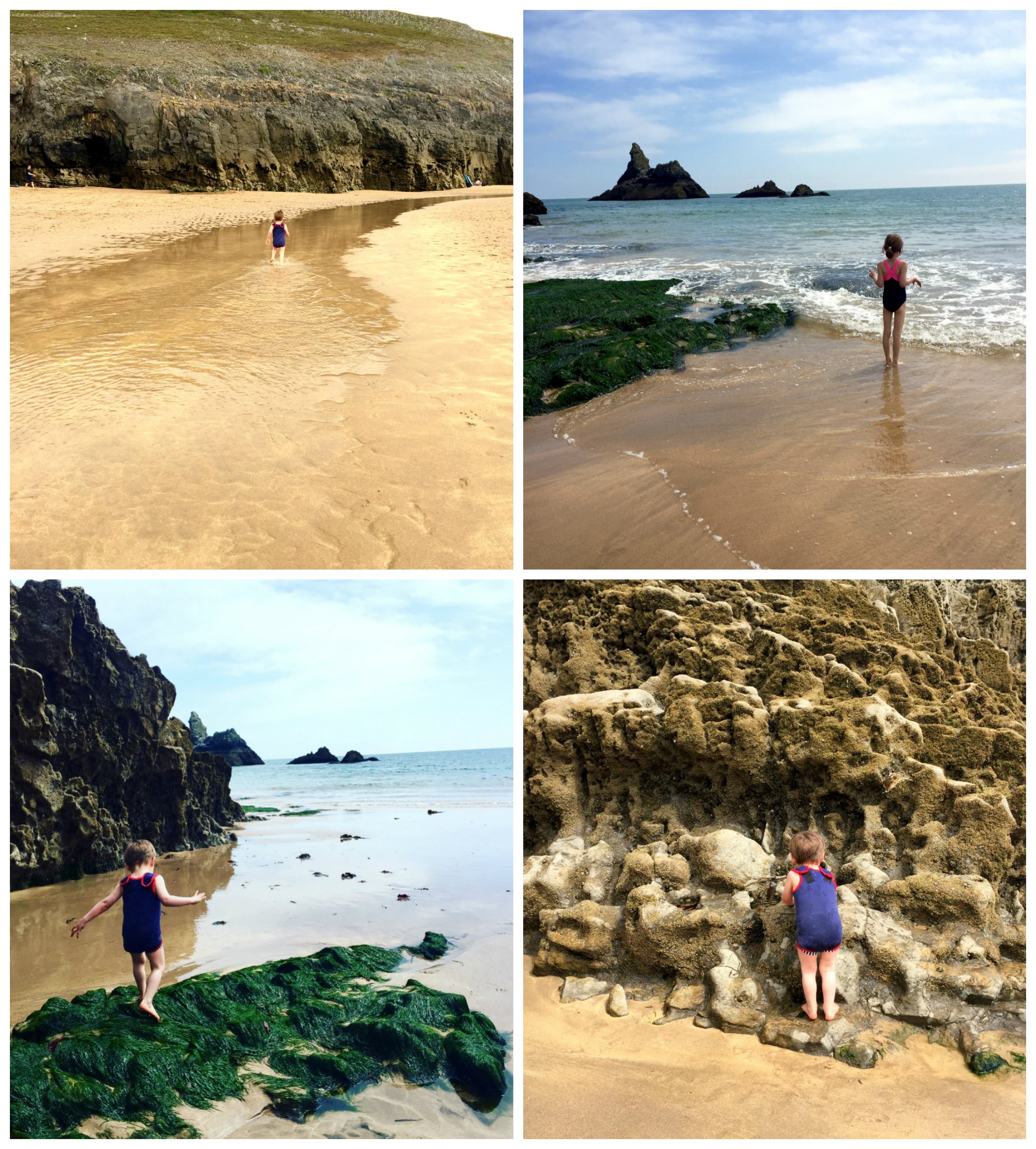 And then it got cloudy, windy and a lot colder, so it was back on with the layers of clothing over our swimming costumes. We stayed for another couple of hours, determined to make the most of the last day of our holiday.

We drove straight back to Cardiff from the beach, three little ones absolutely exhausted from their adventures and soon fast asleep in the back of the car. We might not have had the best weather, but we loved our week in Pembrokeshire, and we certainly made the most of it, making sure we had the best holiday we could. 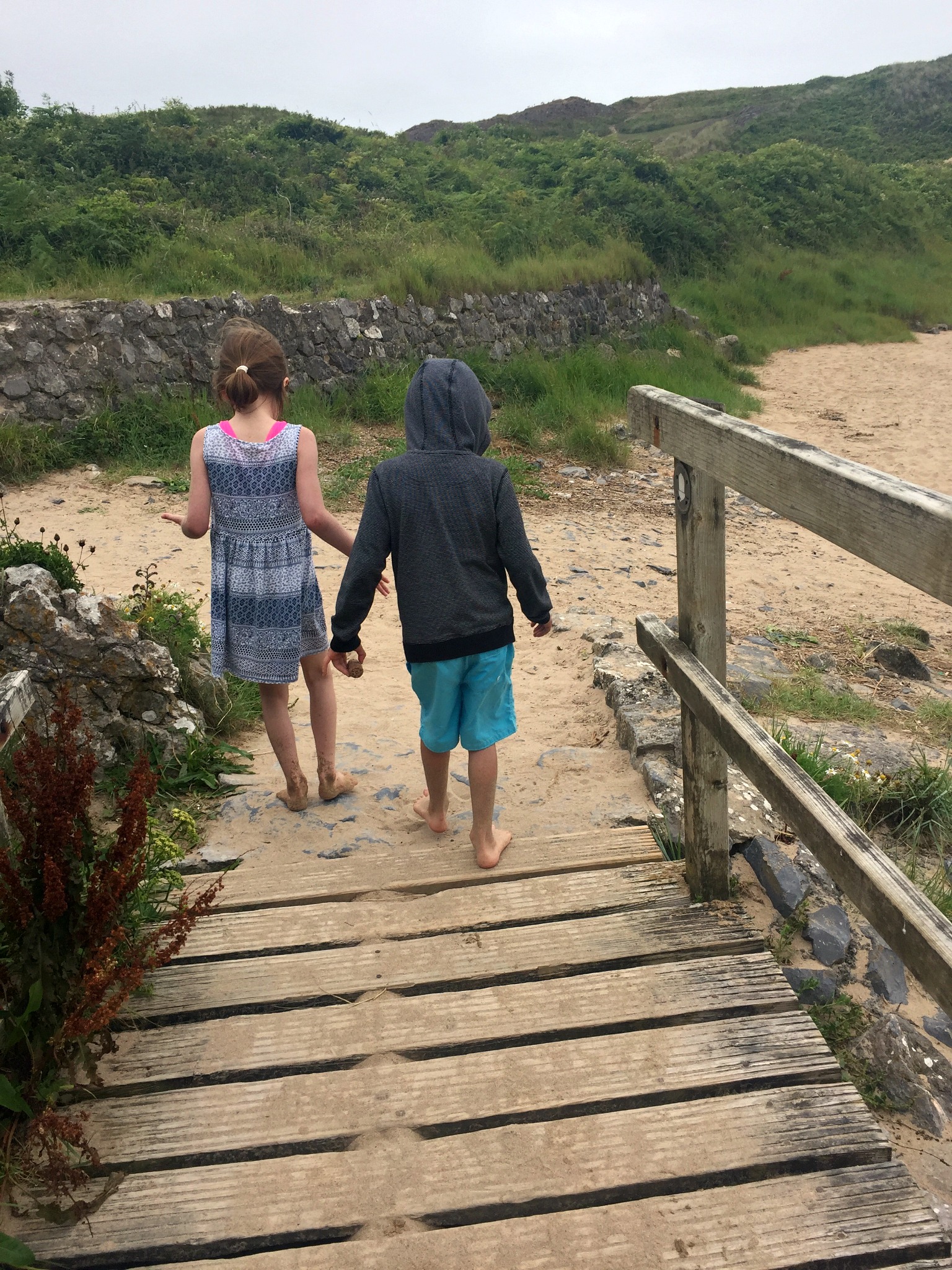 Have you been to Tenby or anywhere else in Pembrokeshire with your children? What are your favourite places to visit? I’d love to hear your recommendations for places to visit either in the comments below, on the Cardiff Mummy Says Facebook page or you can tweet me on @cardiffmummy

For more ideas for child-friendly holidays in the UK, visit the UK Family Travel section on Cardiff Mummy Says. 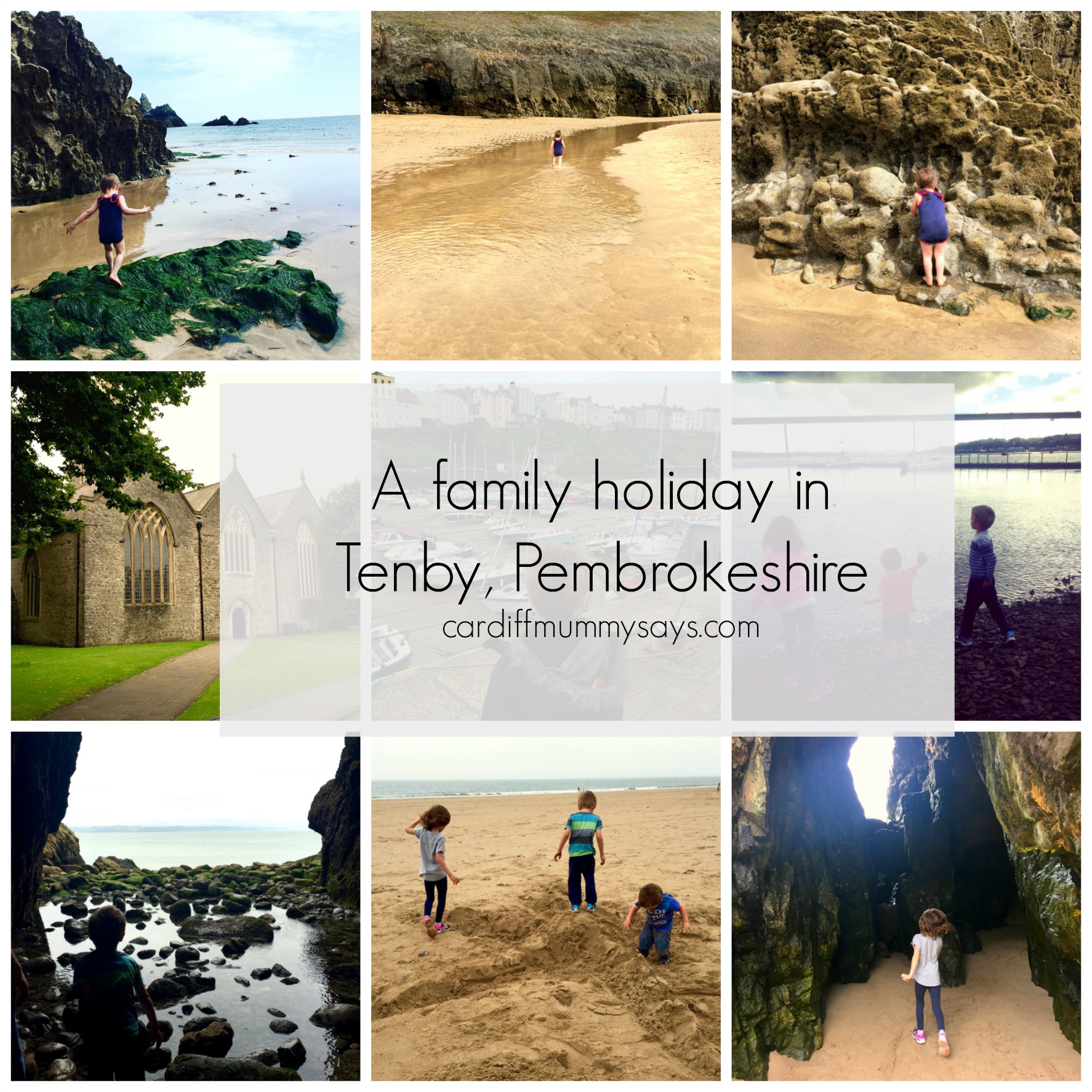 12 Comments to A wet and windy week in Tenby, West Wales