All three of my children love trains, Toddler especially, so you can imagine how excited they were with a trip to Perrygrove Railway to ride on the steam trains.

We headed there at the weekend, as part of our visit to the Wye Valley and Forest of Dean.

Located in Perrygrove Farm, near Coleford in Gloucestershire, it took us around 40 minutes to drive there from Cardiff and it was about 20 minutes away from Tintern, where we were staying – and just down the road from Puzzlewood, but more of that later! 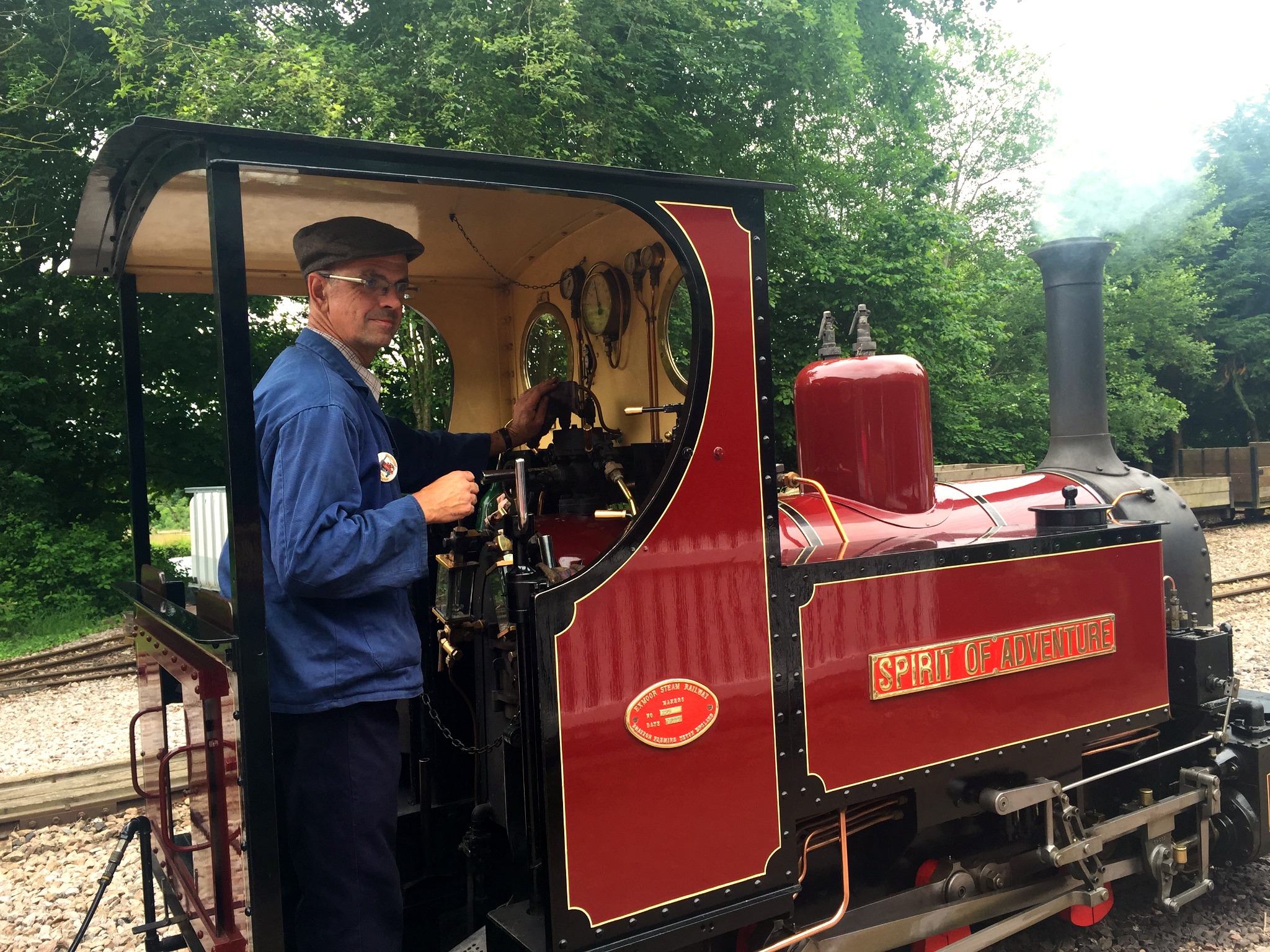 We’d just missed a train when we arrived – but there was plenty to keep my children entertained while we waited for the next one.

There’s a café area serving hot and cold snacks and meals, and a wooden railway set in the corner. My Toddler (who you might notice insisted on wearing a Thomas the Tank Engine coat for the occasion) loves his wooden train sets, so he made a beeline for this.

All three of my children loved the indoor village – two floors of little play houses, connected by tunnels only the children can fit through and thin staircases, plus balconies to look down from. It could do with a lick of paint, but my children thought it was brilliant fun and it’s the first thing they tell people about when asked about their weekend away. 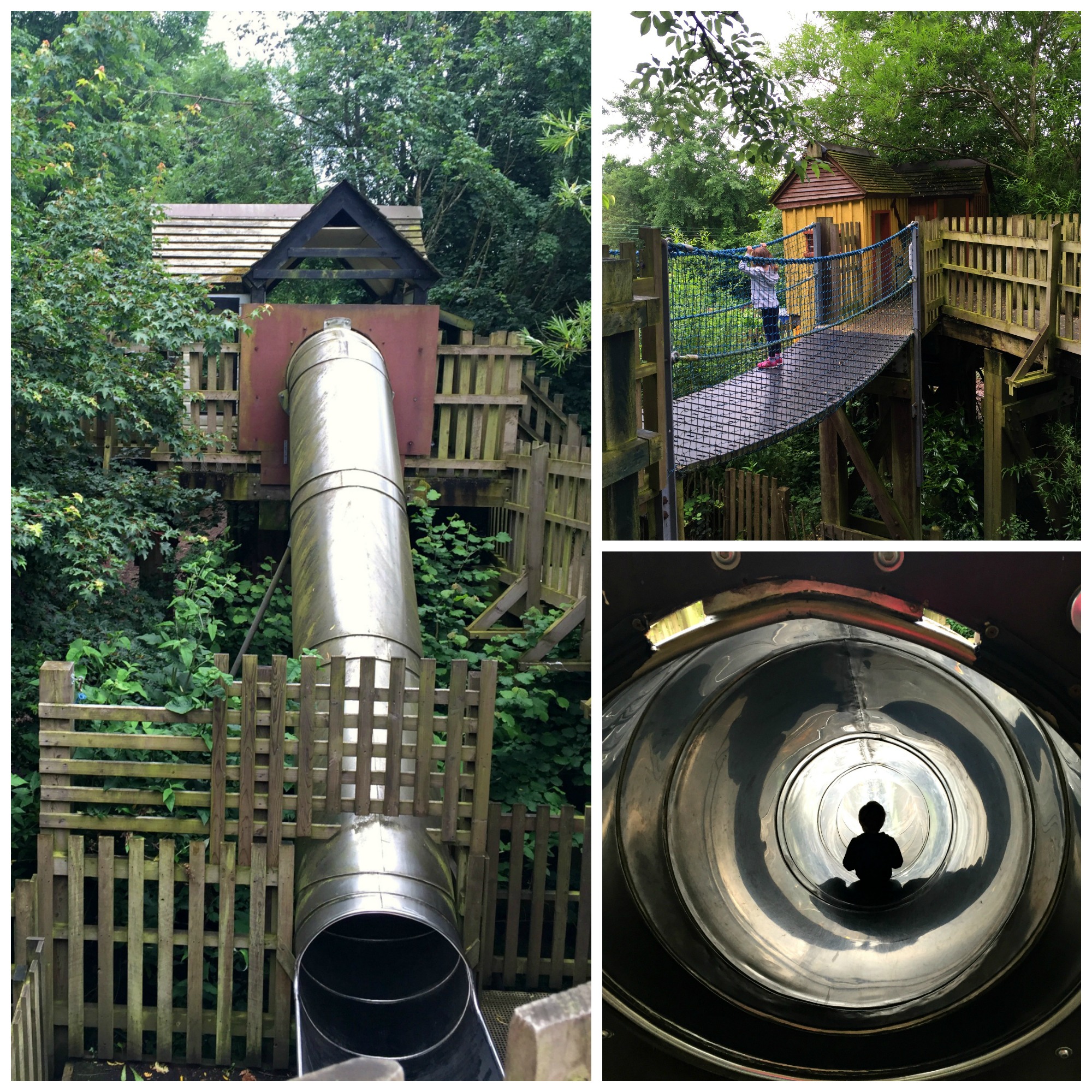 They also enjoyed the outdoor treetop adventure playground, which is mostly accessible for wheelchairs and buggies, thanks to its wide boardwalks and ramp up into the trees. There’s a fantastic tunnel slide, various treetop houses and a wooden train station.

But of course the highlight at Perrygrove Railway is the old-fashioned steam train and my children were so excited to get on board – not least because the guard asked them to wave the green flag to let the driver know we were ready to go. 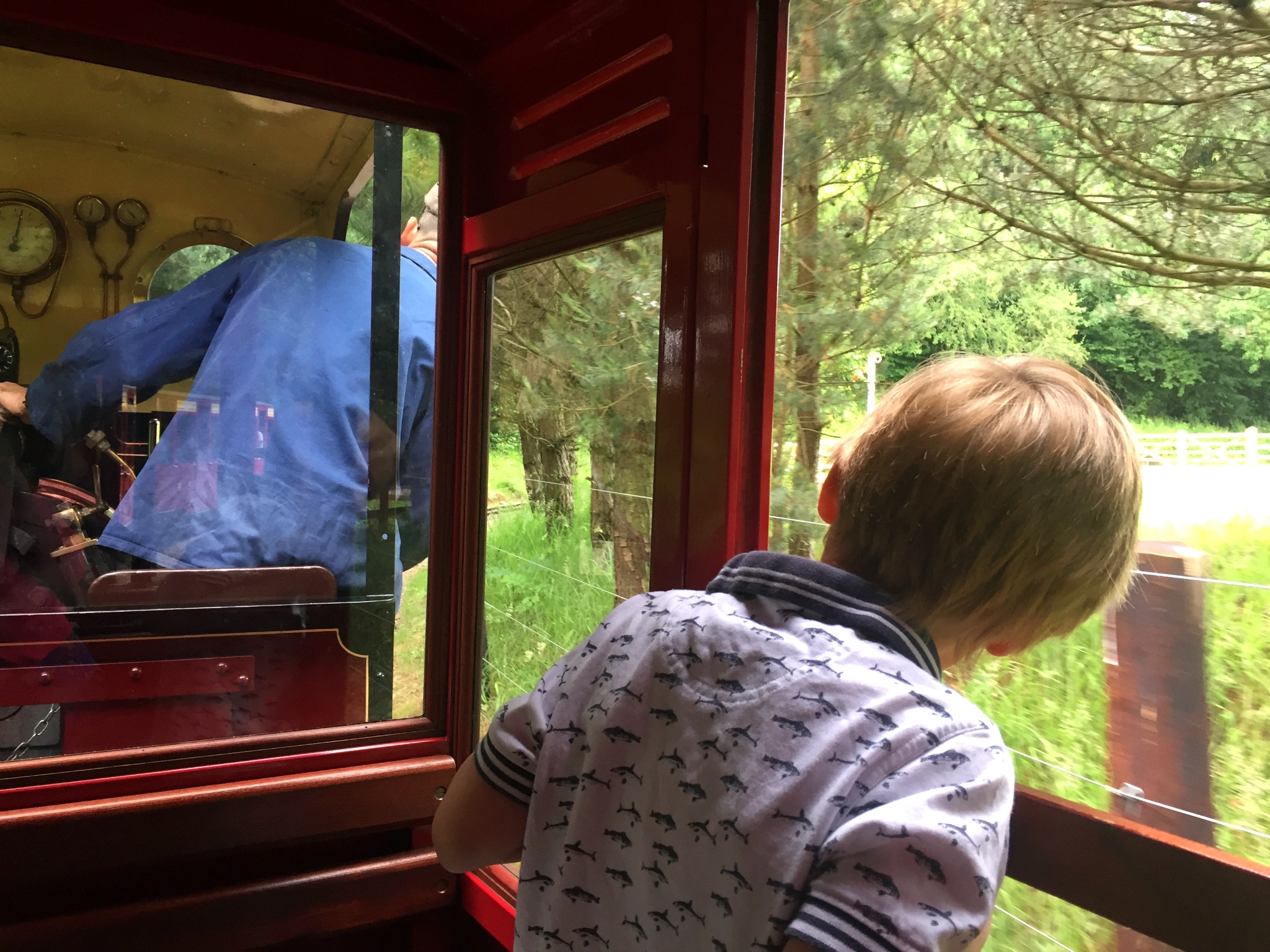 The train journey takes around half an hour, travelling around the farmland and woods and taking in four stations, before coming back on itself. You can get off at any of the stations to explore the woodlands, or continue to the end, spend a few minutes playing in the undercover playground, watch the engine de-couple from one end of the train to the other, before re-boarding and heading back.

Once you’ve paid your entrance fees, you can ride the train as many times as you like – we did two train journeys, with a packed lunch in between on one of the many picnic tables.

We also took part in the treasure hunt. This costs an extra £1.90, plus a refundable £5 key deposit. You’re given a clipboard with a key attached and have to look out for clues all around the site to work out which safety box in the indoor village your treasure is hidden inside. 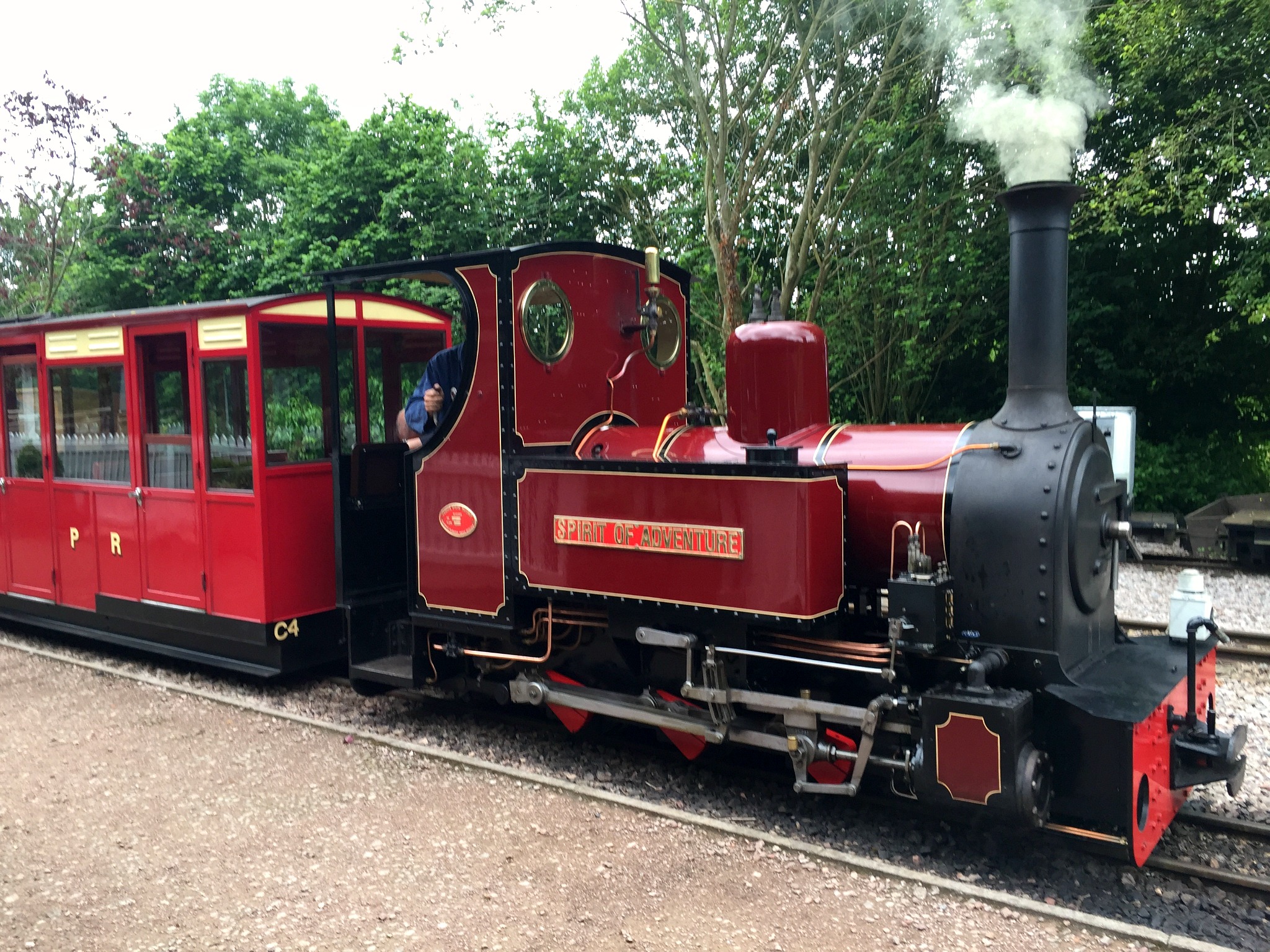 Although Perrygrove is undoubtedly better to visit in the sunshine, I loved that the playgrounds, the indoor village and the trains are undercover, meaning the day wouldn’t be a complete right-off if it were to rain.

Perrygrove is open every weekend all year, and daily in local school holidays. If you have pre-schoolers, it’s worth checking out their Toddler Tuesdays, held from Easter until half term., My blogging friend Sally from Bear and Cardigan recently went to one of the toddler days with her grandson and wrote about the experience here. They also run Christmas experiences where children can meet Father Christmas. 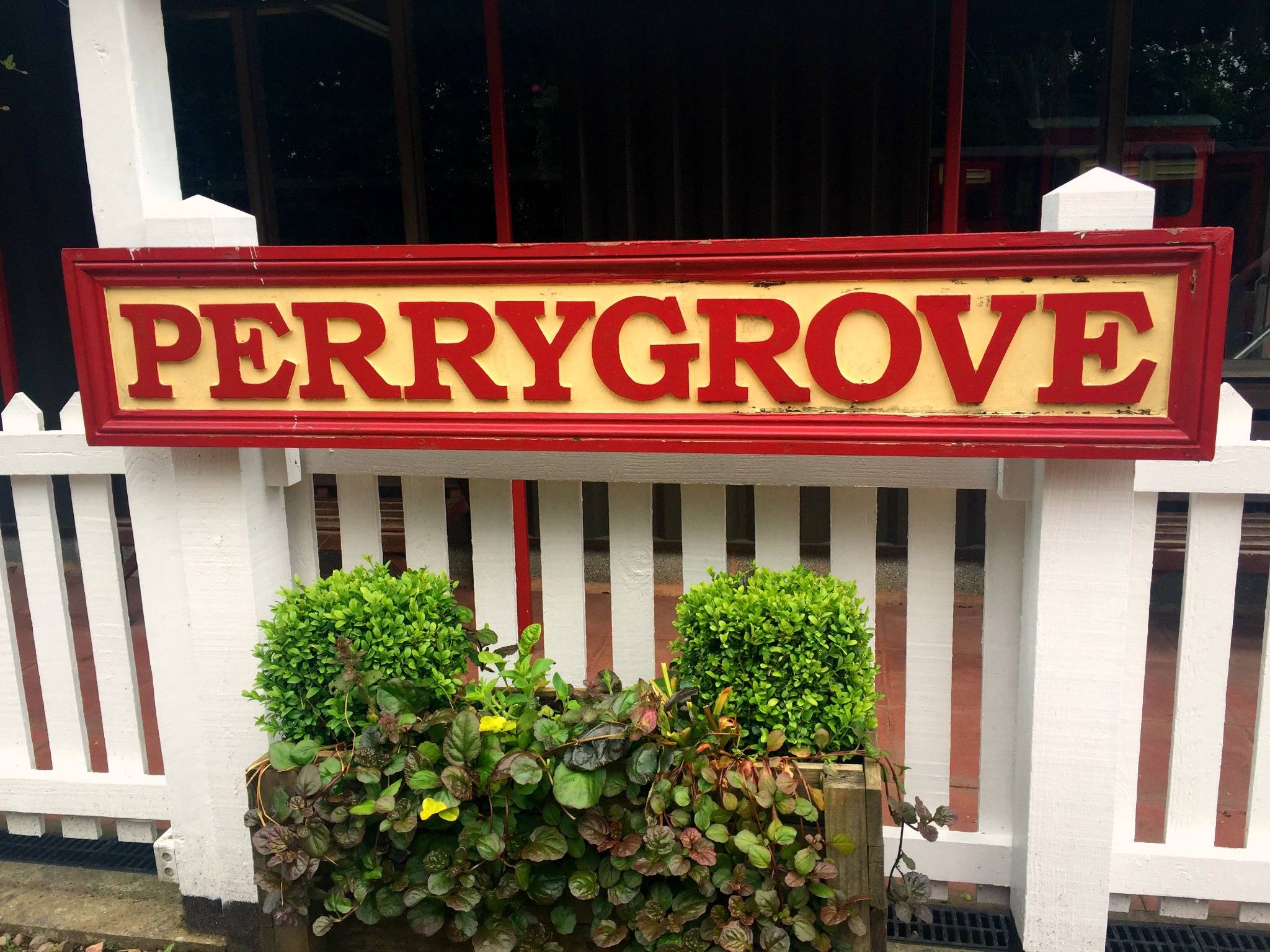 Perrygrove is more of a half-day activity than a whole day and, handily, Puzzlewood – also a half day affair – is just a couple of minutes down the road, which is where we headed for the afternoon. 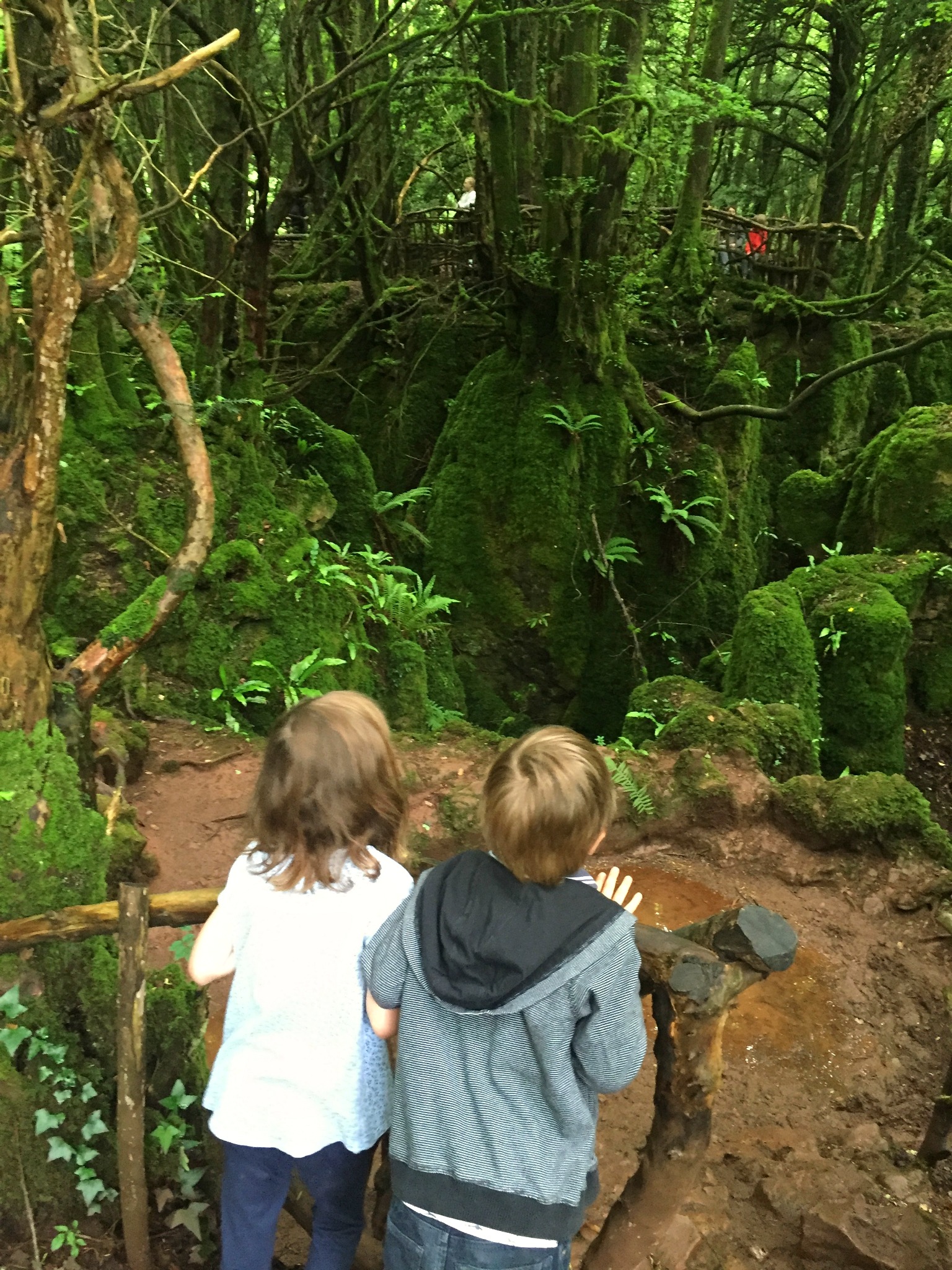 Puzzlewood is an ancient 14-acre woodland site famed for its enchanting tree and rock formations. It’s reputed to be the inspiration for JRR Tolkien’s Middle Earth, and has provided the perfect mythical location for films and television dramas including Dr Who, Merlin and Atlantis.

Before you get to the woods themselves, there’s lots to do. We spent time meeting the farm animals, including ducks, pigs, donkeys and goats, as well as exploring the indoor maze and the toddler racing track. We’d already had our lunch at Perrygrove, but there are plenty of picnic tables and a café, plus a gift shop. 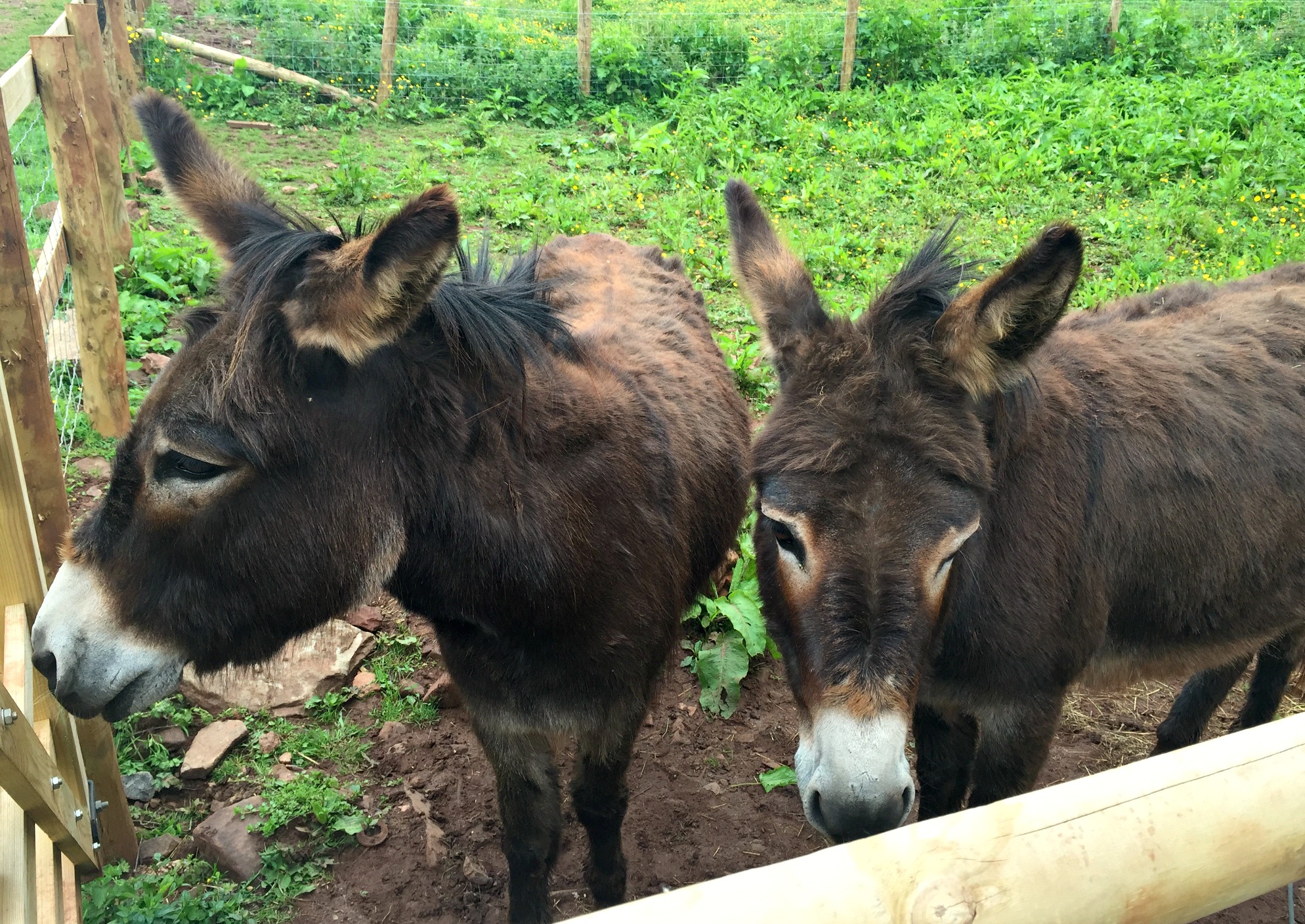 Although the day we visited on was dry, the woods were still muddy, so I was thankful we had our wellies and spare clothes with us.

We definitely needed them! I think Toddler thought it was called Puddlewood, because he took every opportunity to splash his way through the big muddy puddles. 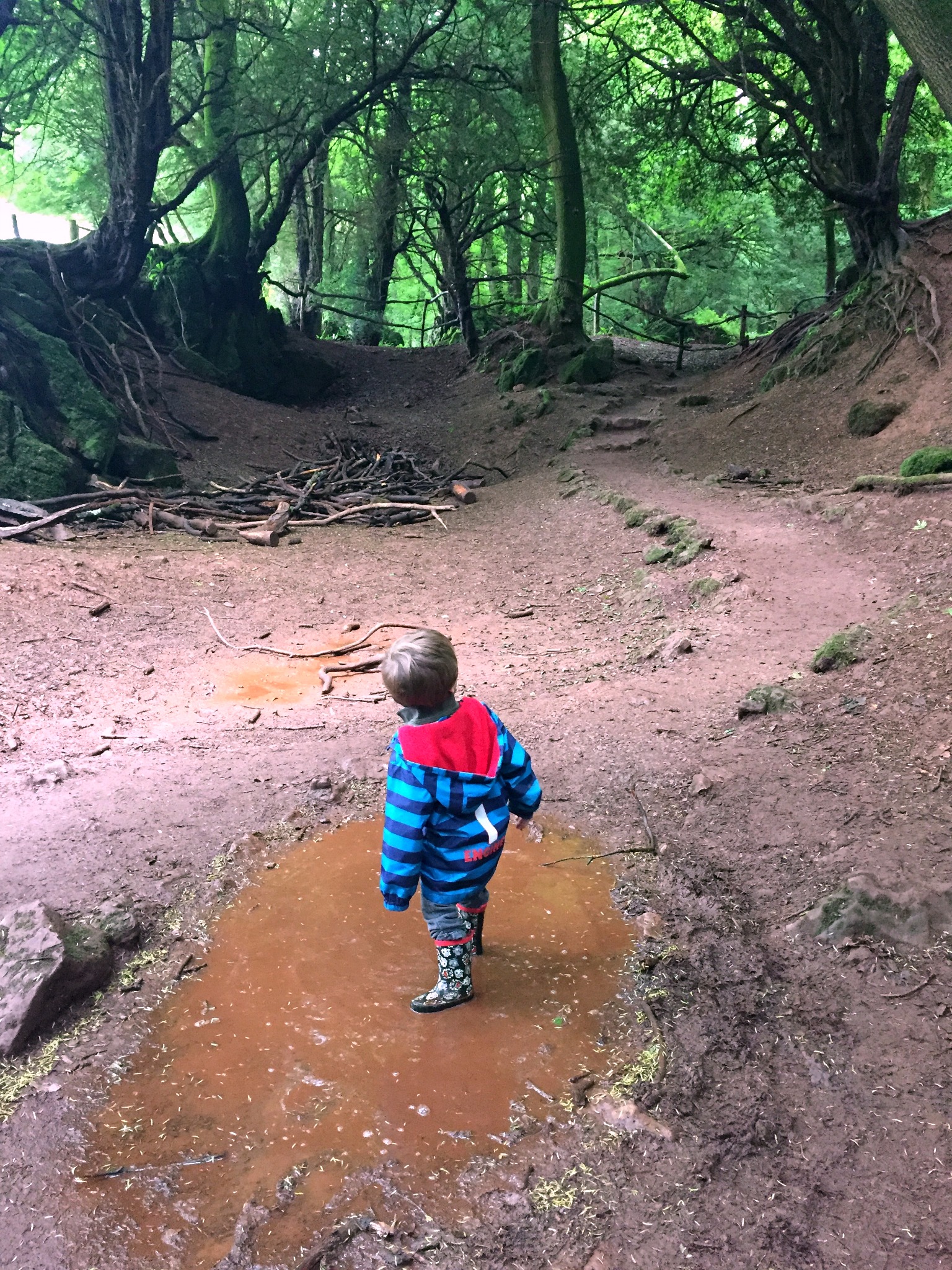 We were in the woods for about an hour, exploring the winding pathways, wooden bridges, secret caves mossy rocks, lookouts and ancient trees. There are no signs pointing you in the right direction, and we did get a bit lost at times, but thankfully made it out in one piece.

It’s such an unusual place; I found myself in complete amazement that something could naturally grow like this. It originated through the erosion of natural underground cave systems, formed in carboniferous limestone millions of years ago. Erosion and uplift caused the caves to become exposed at the surface, which was then exploited for the extraction of iron ore, from the Iron Age to Roman times. 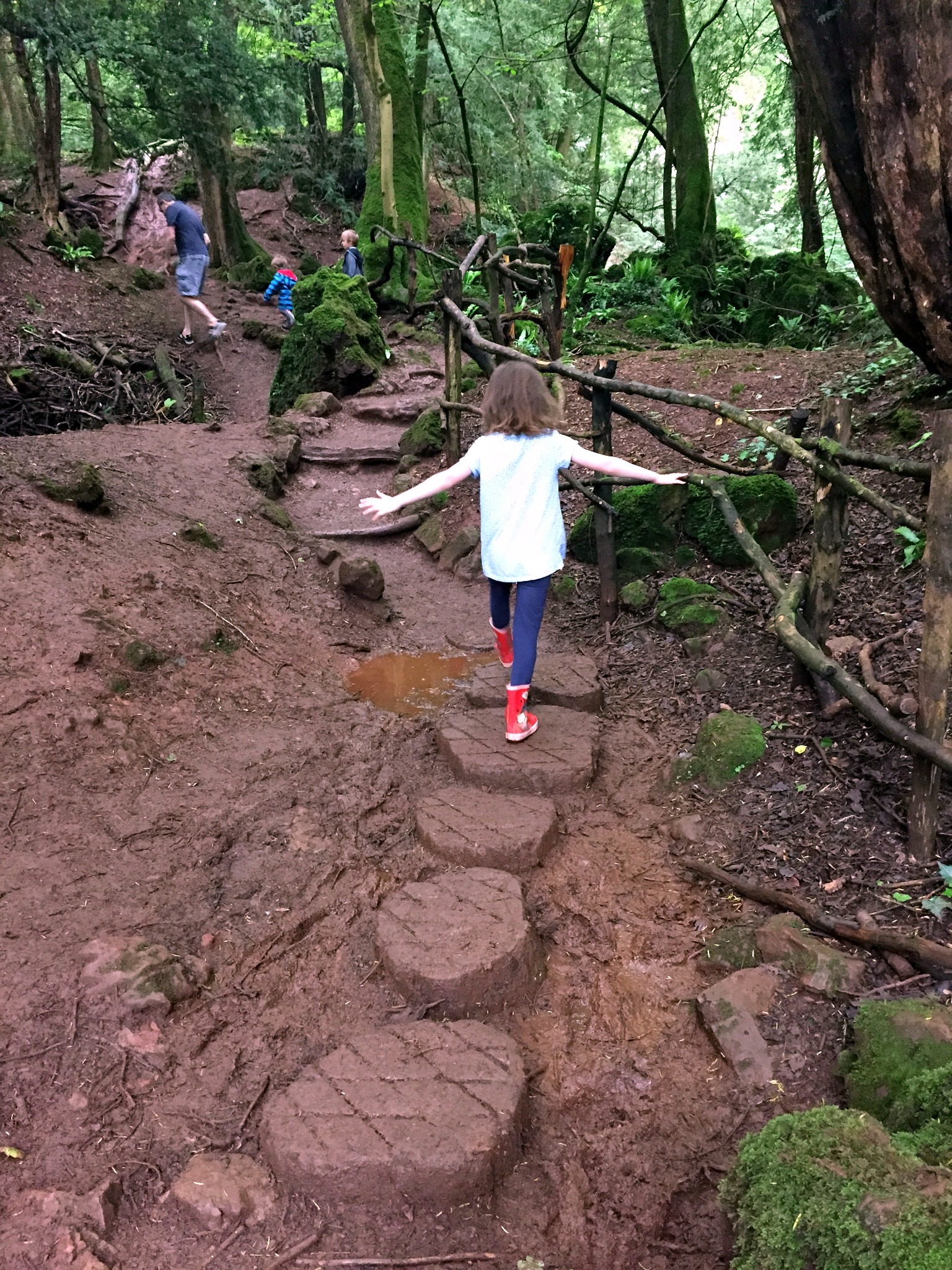 The natural scenery is incredible and you can easily imagine mythical characters living in the forest. Little Miss E, my 6.5-year-old daughter was hunting for fairies, while Little Man O, my 4¾-year-old, was looking out for trolls. It was lovely to see their imaginations bubbling over. 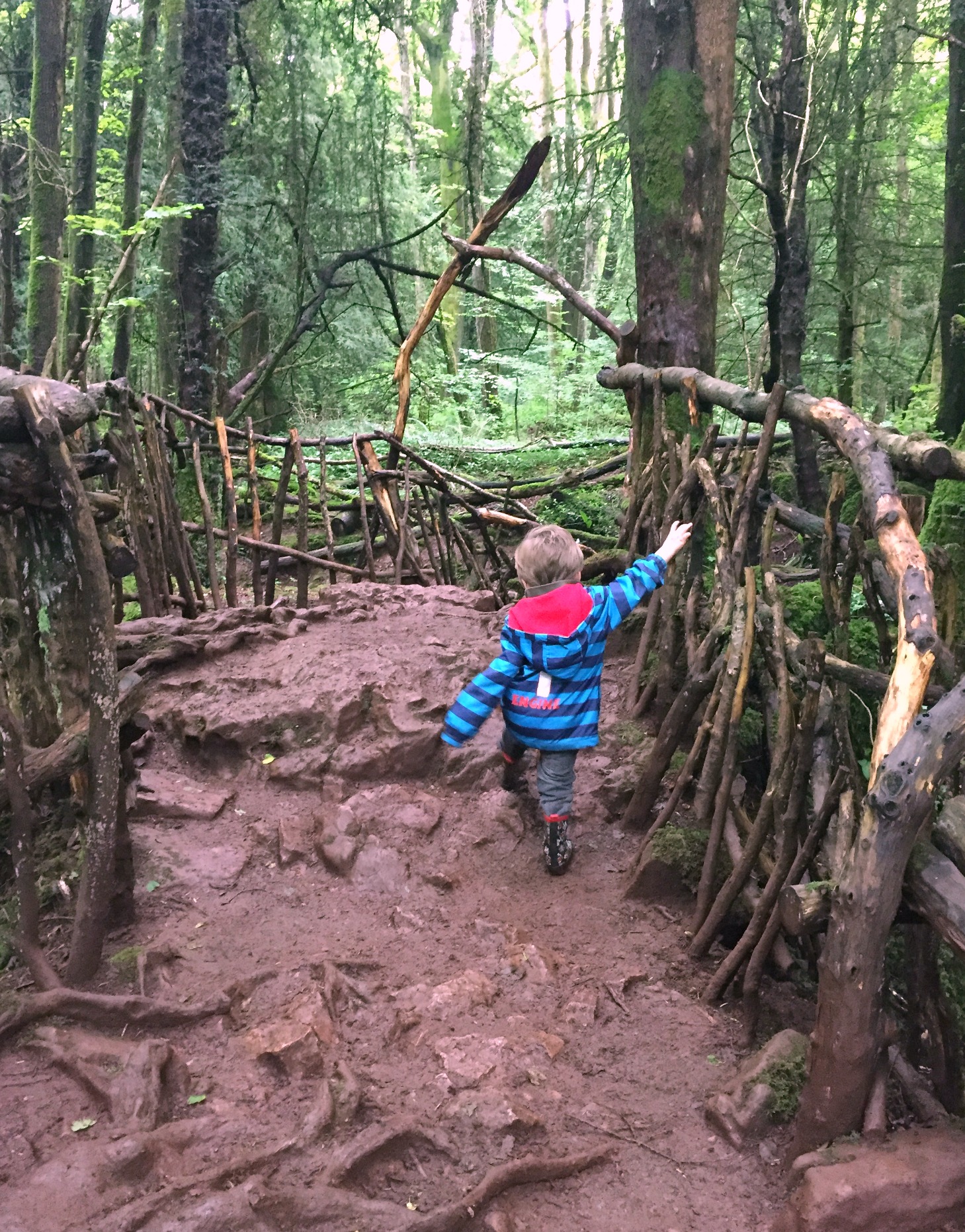 Some of the paths are slightly slippery, and buggies aren’t allowed on site for health and safety reasons, but Toddler just about managed his way around.

Thank goodness, because there was no way I wanted to carry that muddy little mess!

Puzzlewood is open daily from April to September, with reduced opening days throughout the rest of the year. See the website for details.

Have you been to Perrygrove Railway or Puzzlewood? What did you think? Let me know in the comments section below, on the Cardiff Mummy says Facebook page or by tweeting me on Cardiff Mummy.

You can see all our family travel posts here and see photos of our trip on the Cardiff Mummy Says Instagram gallery.

Win a family day out at Perrygrove Railway!

One lucky Cardiff Mummy Says winner will receive a family pass (up to two adults and two children) to visit Perrygrove Railway! You can ride the steam trains, scale the treetops in the adventure playground and explore the indoor village.

For a chance to win, answer this question in the comments section of the Perrygrove and Puzzlewood post on the Cardiff Mummy Says Facebook page. Deadline for entries is Sunday 26th June, 10pm

Q. How many stations are there at Perrygrove Railway?

The winner will be drawn at random from all the correct entries submitted by the deadline. The prize is for one family ticket and there is no alternative. The prize can be used for standard entry on days where there aren’t any special events. The prize must be used by the end of December 2016. See the website for details of days the railway is open, and for details for special events where the prize will not be valid. Good luck! 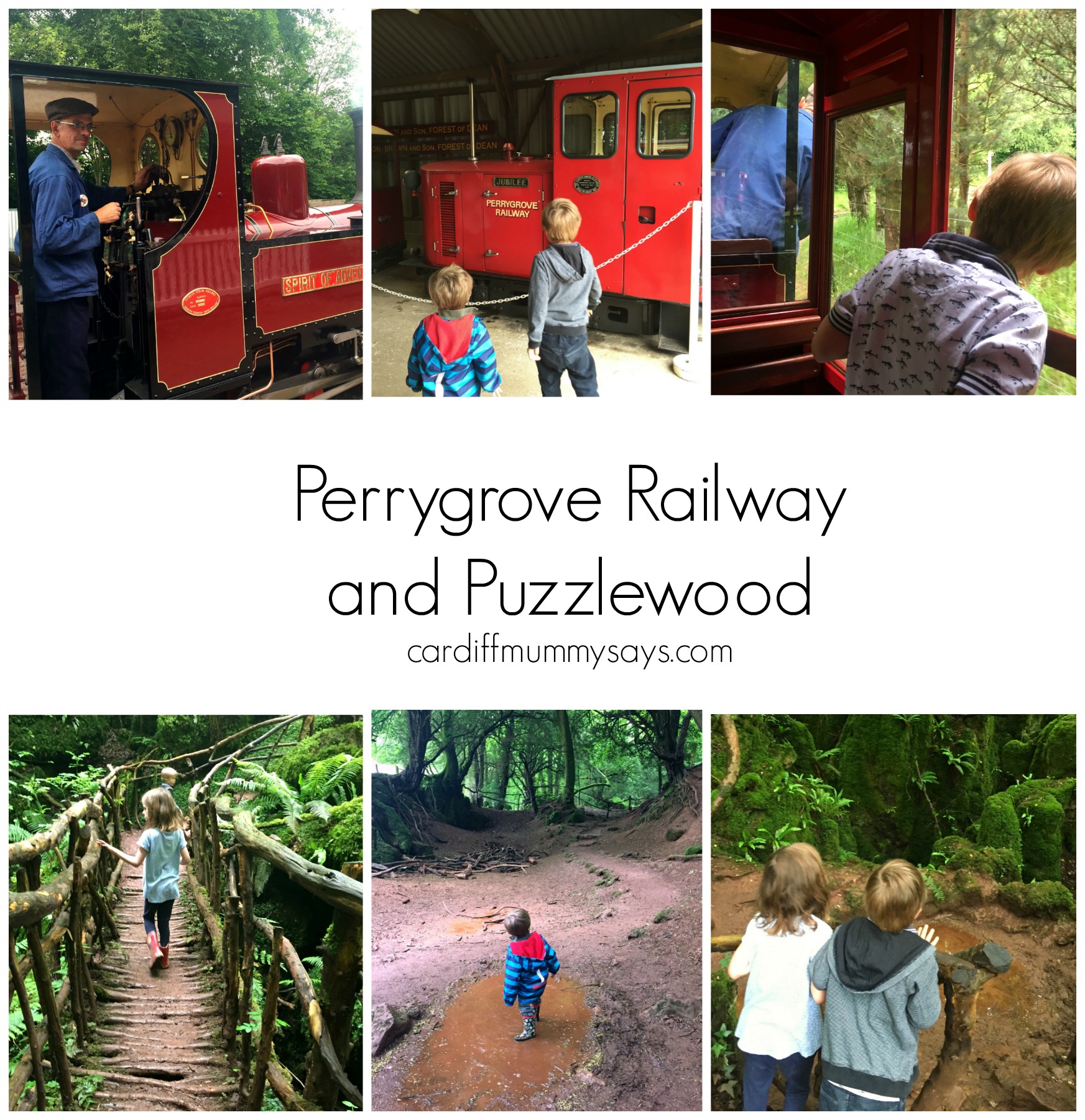 Disclaimer – we were given family tickets to both Perrygrove Railway and Puzzlewood, with thanks to the Forest of Dean and Wye Valley Tourist Board.