Our review of the new Dino Tales app

Like a lot of children their age, my three love dinosaurs. Five-year-old Little Miss E is learning all about them in school and can’t wait to tell me at pick-up all manner of facts about dinosaurs. Three-year-old Little Man O is always wearing his dinosaur dress-up costume. He has a whole host of plastic dinosaur toys and is forever asking to read dinosaur-themed books (Tyrannosaurus Drip by Julia Donaldson and Captain Flinn And The Pirate Dinosaurs by Giles Andreae are two of his current favourites). Even Baby Boy I is having a dino-themed first birthday later this week – his favourite toy is a soft dinosaur which he clutches in his hand every night when he goes to bed. We regularly go to the National Museum in Cardiff to see their impressive collection of dinosaur skeletons and replicas and they both love the dinosaurs at Dan Yr Ogof when we visited a few months ago. 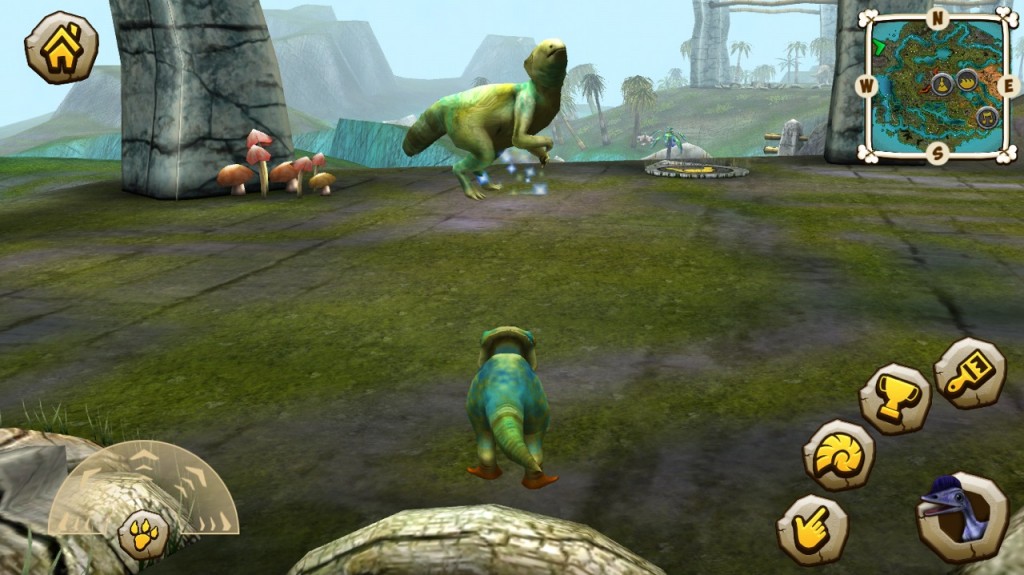 We loved the way the dinosaurs moved around in Dino Tales

So when we were asked to review the Dino Tales app for iPhone and iPad, I was keen to give it a go. I should tell you here that my children don’t have a lot of screen time. They don’t really play apps and we don’t have a tablet – but Kuato, the makers of Dino Tales, persuaded me to give this one a go on my iPhone 6 by telling me it has been created by educational specialists and tested by pupils and primary school teachers from across the UK. I hoped it would support Little Miss E’s dinosaur project at school, as well as supplement Little Man O’s passion for all things prehistoric with factual information discovered in a fun way (although at three and a half, he’s a little younger than the recommended age group for the game, of 4-10 year olds).

After entering Little Miss E’s name and reading age, they hatched a dino egg and out popped a little cerasinops, which they named Bella. Their job was to guide Bella through the 3D prehistoric terrain, to collect eggs and complete a number of challenges including lava slides and rock bowling.

It took both of them a while to get to grips with the control panel – this is a small virtual joystick in the left-hand corner of the screen, which would be easier for older children, but Little Miss E found that the dino didn’t always go where she wanted her to. Perhaps touch-screen controls would have worked better here. 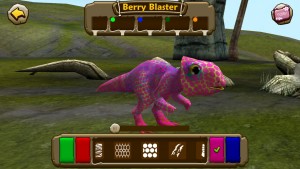 Little Miss E enjoyed customising her dinosaur… although I’m not sure how many pink spotted dinos there were in prehistoric times.

Little Miss E loved customising her dinosaur. Every few minutes, she would click on the logo in the right-hand corner and change the colour and pattern. There can’t have been too many pink polka dot dinosaurs millions of years ago so I’m not too sure this element of the game is very educational, but she had great fun expressing her creativity in any case. She also loved sweeping her finger across the screen to make Bella roll over and sneeze. This led to discussions about – and impressions of – how dinosaurs would have moved and whether they would have sneezed/coughed/jumped etc.

Little Miss E didn’t quite manage the challenges she was supposed to complete. To be honest, I struggled to work out in which direction our dinosaur was supposed to be going, as the map at the top of the screen was a bit small and confusing. But they loved the way Bella lolloped around. 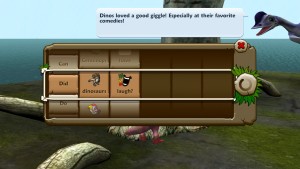 My children thought the question element of the game was brilliant. Using their fingers, they could spin the word wheel to mix and match each component of the question. Some of the questions were really educational – such as “Why do you have a tail?” Others were a bit less serious, such as “Did dinosaurs laugh?” When it came to the answer – “Dinos loved a good giggle! Especially at their favorite comedies.” Older children and adults would know when the game was being tongue-in-cheek, but I don’t think younger children would get these subtleties, which slightly compromises the educational aspect of the game.

Some of you will have noticed the Americanised spelling of the word favorite and elsewhere we had realize and Mommy. As a journalist and editor, this is a big bug-bear of mine and I was a disappointed to see this in an educational game marketed to British audiences.

I also found the synthesised voice of Darwin, the dinosaur guide helping us in our mission, a bit annoying (although I don’t think this bothered my children). The computerised and old-fashioned voice jarred with the vivid and impressive graphics. He mispronounced “read” as “red”, when it should have been said as “reed”, which was inexcusable, as this word crops up a lot and is surely key to an app that prides itself on its story-creating element? 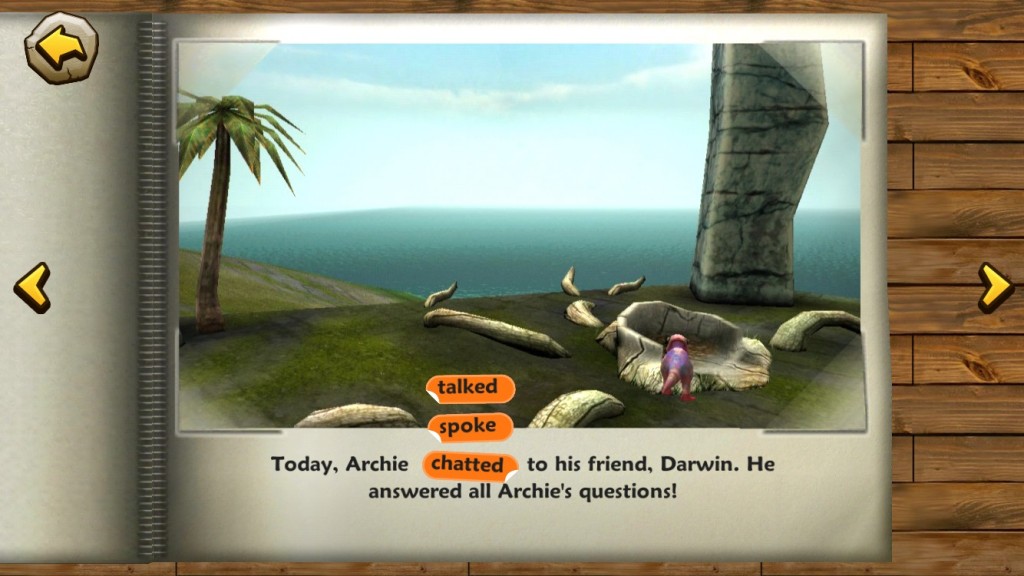 Dino Tales creates a story based on your game

Once you’ve come to the end of your game, a notification pops up to let you know you have a new Dino Tale ready to read. Little Miss E thought this was great. These mini-books are set to your child’s reading ability, are saved on your profile, and offer a drop-down menu where you choose one of three words to customise your story.

Little Man O was a bit that upset that when it came to his turn to play, you could only have one player profile on the app, so he had to play under his sister’s name, rather than his own.

As a parent, I appreciated the option to set how long they could play for, as well as a pin-activated parental area, and it was good to see different species of dinosaurs and types of fossils referred to by their correct names. Our overall conclusion: I’m not sure how much my children learned from this game, but it looked great, they had fun and it enhanced their passion for dinosaurs.

Dino Tales is available from the App Store for £2.99

Did you know there’s a Cardiff Mummy Says Facebook page? Do come and say hello or tweet me on @cardiffmummy

DISCLAIMER
I am a member of the Netmums Blogging Network, a unique community of parent bloggers from around the UK who have been handpicked by the Netmums team to review products and brands on their behalf. I may have been paid expenses, and have been supplied with a product sample for this review, but retain all editorial control. All my Netmums Reviews will display the Netmums logo within the post.”
<i>This is a Netmum’s sponsored review. To find out more click the button:</i></div>

Homepage » games » Can an app teach my children about dinosaurs? Dino Tales review