The fifth annual Cardiff Children’s Literature Festival started today, with events across the city celebrating the best in writing for kids in Welsh and English.

We are blogger ambassadors for the festival and have been live tweeting and Instgramming from some of the events today.

This afternoon, the five of us went to David Melling’s session on Hugless Douglas, where he got the whole room cuddling and showed us step-by-step how to draw his famous character.

This morning, while her brothers were at rugby, I took my daughter, seven-year-old Little Miss E, to see Anni Llyn (pictured below), the Welsh children’s poet. This was such a fun and interactive session, really getting children thinking about the words and language they use. We played games where we had to guess whether Welsh words were real or made up; a charades-style game where a child had to guess the word stuck on ‘Y Coron Geiriau’ or word crown they were wearing through clues given by the other children; and we brainstormed our favourite Welsh words to create our very own poem. Anni is so charismatic, lively and passionate about language, the session was a real delight. My second language Welsh is oh so rusty, but I managed to keep up! 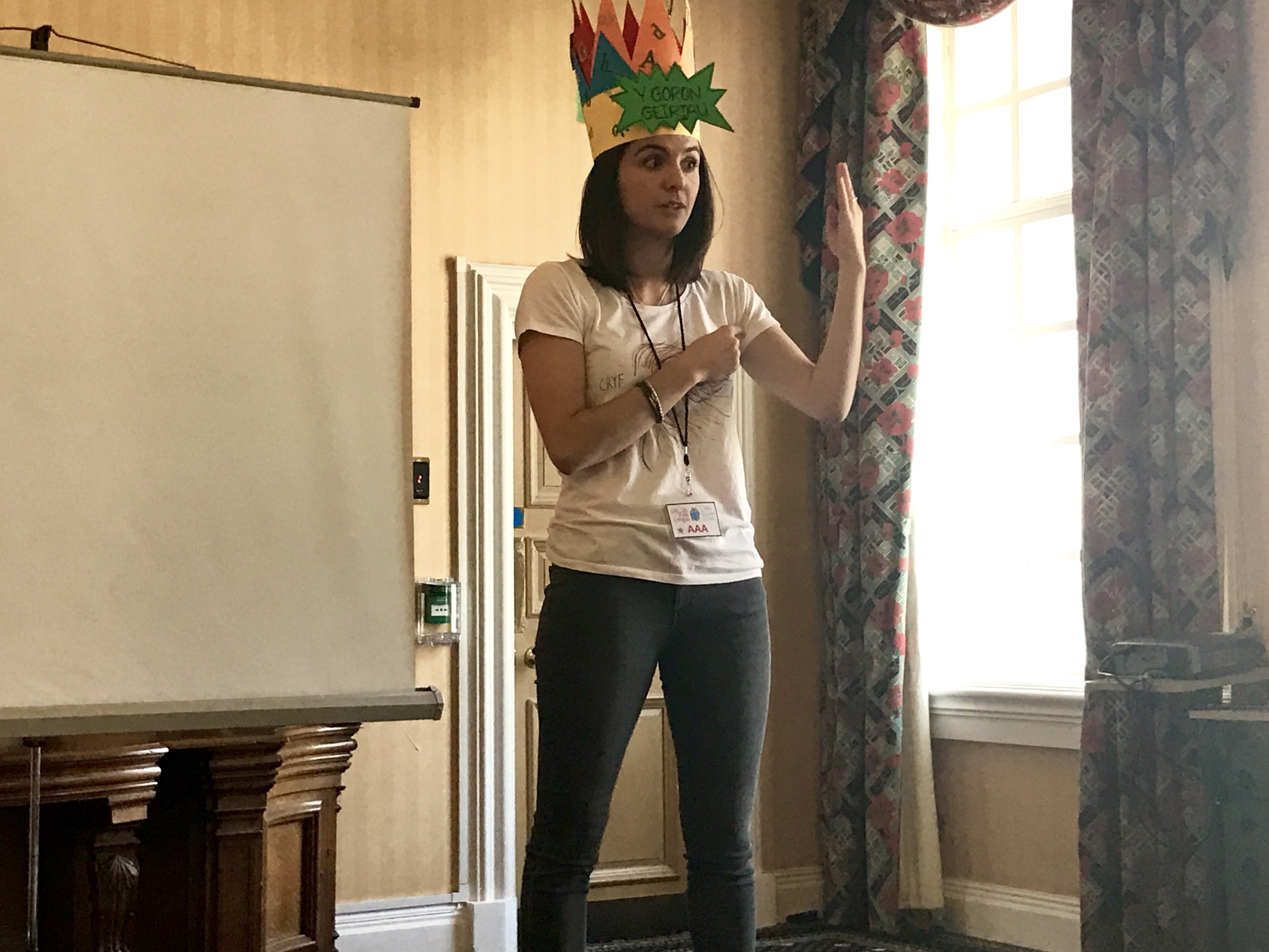 The only downside is that there were still plenty of seats left to fill – so as part of my role as ambassadors for both Cardiff Children’s Literature Festival and Cymraeg i Blant, which supports families of children learning Welsh, I’m publishing a special focus on the rest of the Welsh-language and bilingual sessions, happening tomorrow and next weekend.

I know from the previous posts I’ve done for Cymraeg i Blant that lots of Cardiff Mummy readers have children in Welsh-medium education, so I hope this post is useful for you. It’s a great way to support a child’s Welsh education.

All tickets cost £4 per person and can be booked on www.cardiff-events.com

Any remaining tickets can be purchased at the venues on the day.

A brand new show from In Character bringing Barti Ddu, the most successful pirate ever, back to life in a gutsy, exciting and informative one man show. Hear tales of dangerous sea voyages, blood-thirsty pirates and exotic islands. Barti Ddu is a familiar character in lots of Welsh primary schools who learn all about the Welsh-speaking pirate.

Join author Sian Lewis as she uses her recent published book, Pethau Mawr Pwysig and Atlas Lluniau Mawr to test your knowledge. Who will come out on top, the children or the adults?

Join Nia and Carys for a boptastic session as you sing, dance, imitate and hear tales and stories of various animals inspired by Delyth George’s Dawns yr Anifeiliaid. What kind of animal will you become?!

Huw Aaron is a bonkers comic writer and he wants a room full of bonkers kids to spend an hour and a half with him making silly cartoons, funny characters, and awful jokes. Are you bonkers enough?!

Author Manon Steffan Ros will read from her new novel Pluen (published by Y Lolfa). She will also use her characters as models to help you build their own character profiles. Manon is a prolific Welsh author of children’s novels and has won the Tir na n-Og award twice.

A legendary bilingual party for all! Join rapper Rufus Mufasa and cartoonist Sion Thomas Owen and illustrator Phil Morgan for an afternoon of rapping, laughing, drawing and creating.

Giants, fairies and witches; Wales is full of them, and Mair Tomos Ifans is the expert at finding them and sharing their stories! Wales is a country full of magic and with the help of her harp Mair will open the door and welcome the weird and wonderful creatures of Wales to Cardiff Children’s Literature Festival

Join CAA Cymru and surprise guests for a sensational story-time session! Step into the wonderful world of colourful characters from the ‘All Eyes and Ears’ series – such as superhero Dewi Dewr, Sali and her super space hopper, Cledwyn the pirate, and Myfanwy the campervan – as they embark on each of their adventures. The books are available in both Welsh and English – perfect for children and parents who want to read in Welsh together (useful Welsh vocabulary and bilingual activities are available to accompany the books). Afun-filled session for all the family!

Join Welsh television presenters Lucy and Rhodri Owen for a bilingual storytelling session. Lucy’s first book Boo-a-bog in the Park is a beautiful, reassuring, rhyming story about a little boy called Tom who finds it difficult to make new friends. Rhodri Owen is the author of the Welsh adaptation, Bw-a-bog yn y Parc. All royalties from the sale of the books will be donated to Noah’s Ark Children’s Hospital Charity.