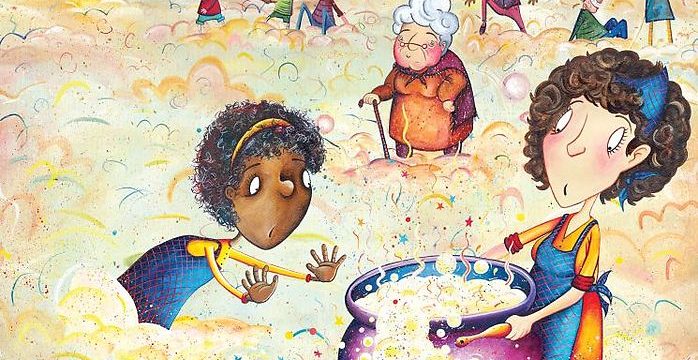 Thanks to the Sherman for inviting us along

A trip to the Sherman Theatre has been one of our Christmas traditions for at least five years now. Their shows for younger children are always so warm-hearted, well-executed and a real pleasure to watch. Taking place in the Sherman’s smaller studio space, the relaxed atmosphere makes it a great first theatre experience for children aged between around three and seven and their families. Little ones can either sit on small chairs or cushions at the edge of the stage and, at around an hour long, it’s just the right length to keep them entertained.

We headed to see this year’s show, The Magic Porridge Pot, yesterday afternoon and as always we were impressed with the quality of the production. 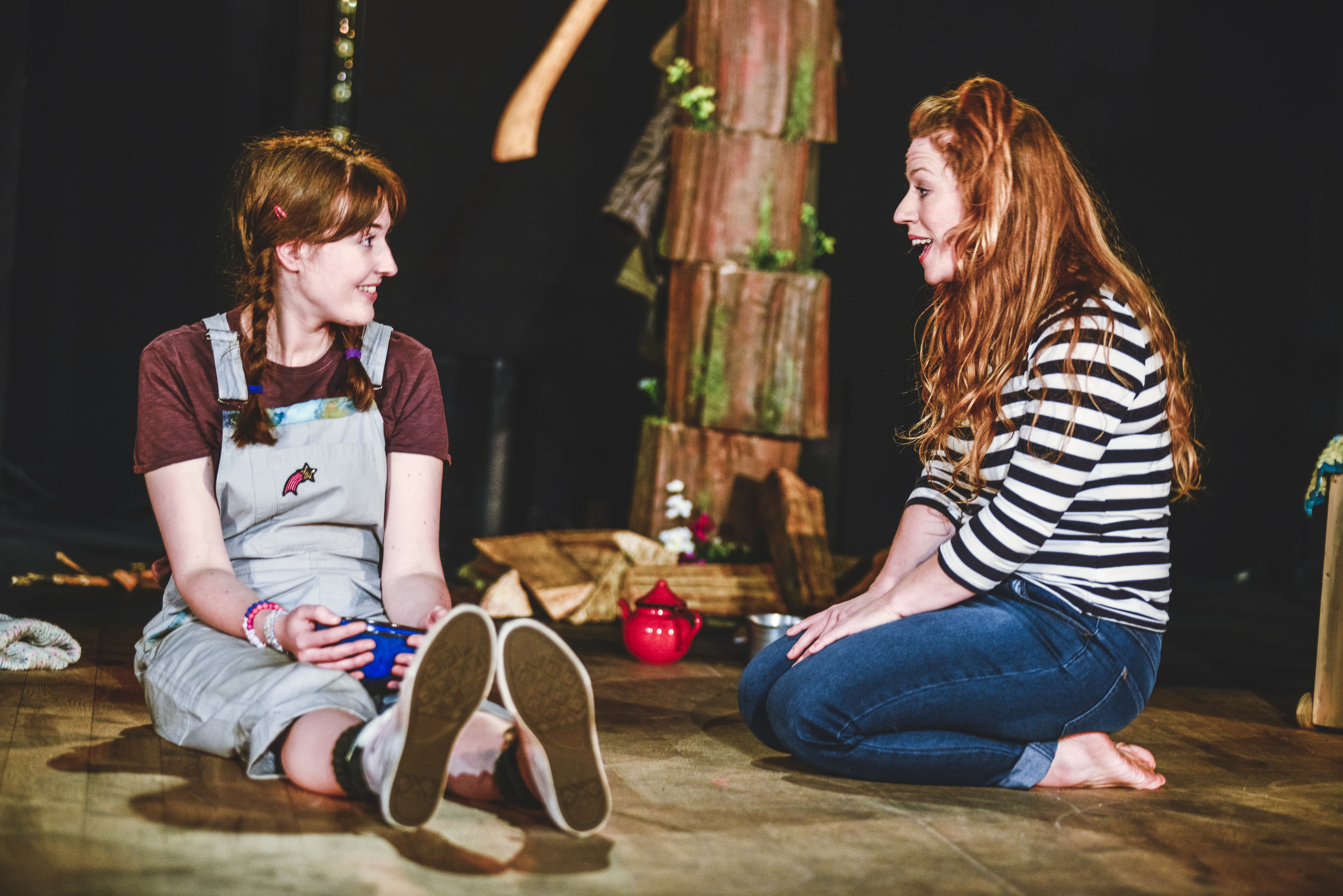 The classic Brothers Grimm fairy tale has been beautifully and sensitively adapted for the stage by Alun Saunders (who was also responsible for 2016’s The Emperor’s New Clothes). The original music comes from Dyfan Jones, who has written the score for several previous Sherman children’s productions including The Ugly Duckling, The Snow Tiger and – my personal favourite – Corina Pavlova and The Lion’s Roar, from 2013.

There are just two performers in the show. Hanna Jarman plays Aggie, a little girl who just wants to help people, while Mali Jones plays her mother, who Aggie calls Nene.

Hanna Jarman has Aggie’s childlike qualities down to a tee; innocent, kind and genuinely intrigued by everything happening around her. Her voice has such an endearing quality to it both when speaking and singing; she is delightful to watch. 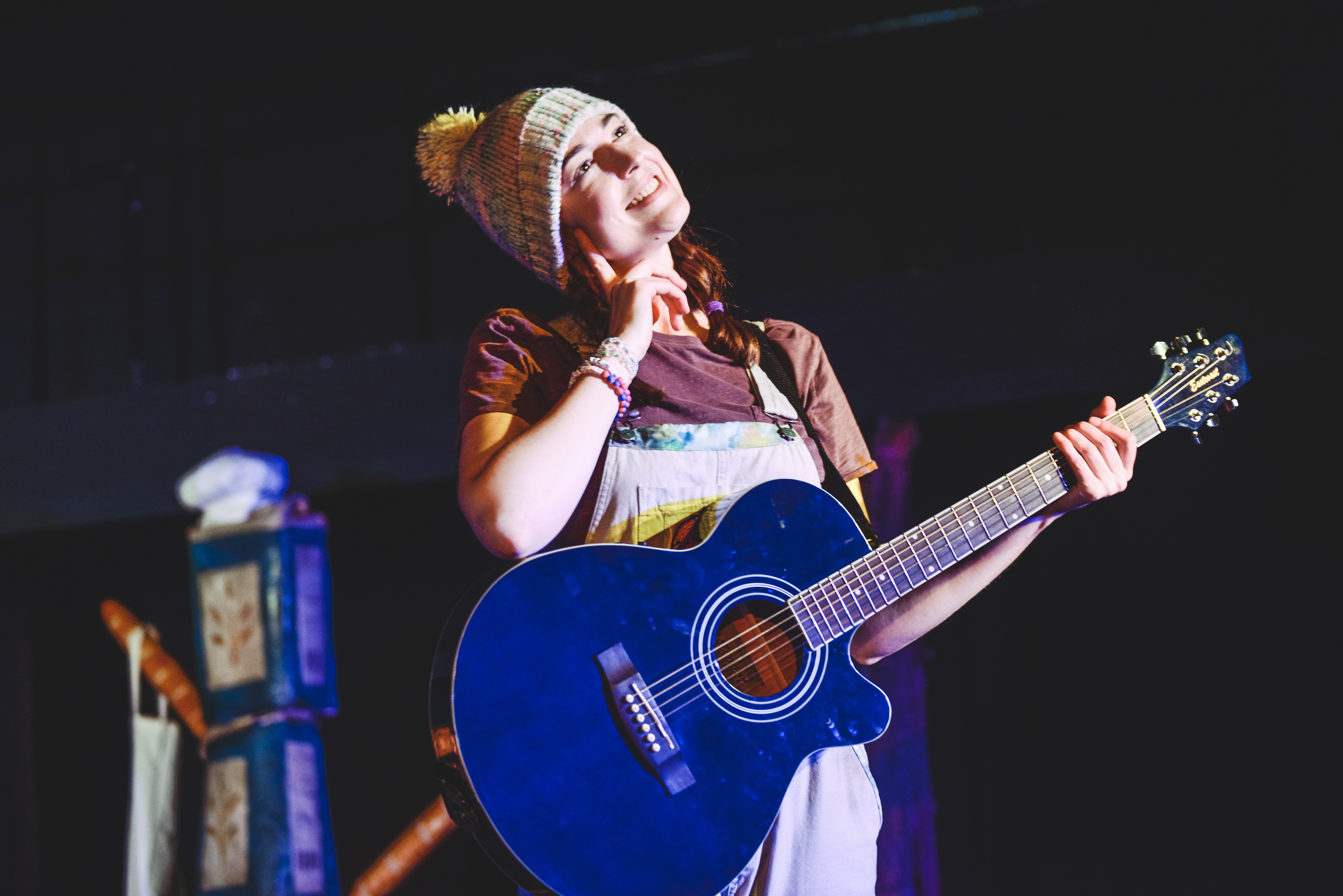 I’m sure I wasn’t the only parent who related to Mali Jones’s exasperation at how her daughter’s eagerness to help often ends up creating more work for her. Mali also plays a host of other villagers, with a fantastic array of accents and brilliant mannerisms that really made the audience laugh. The two had a great stage connection; bouncing well off each other and looking like they were having such fun performing.

I would imagine the tale of The Magic Porridge Pot is familiar to most people but I loved the way the first part of the show really established the characters, taking its time to help us get to know them and build up their rapport with the audience. 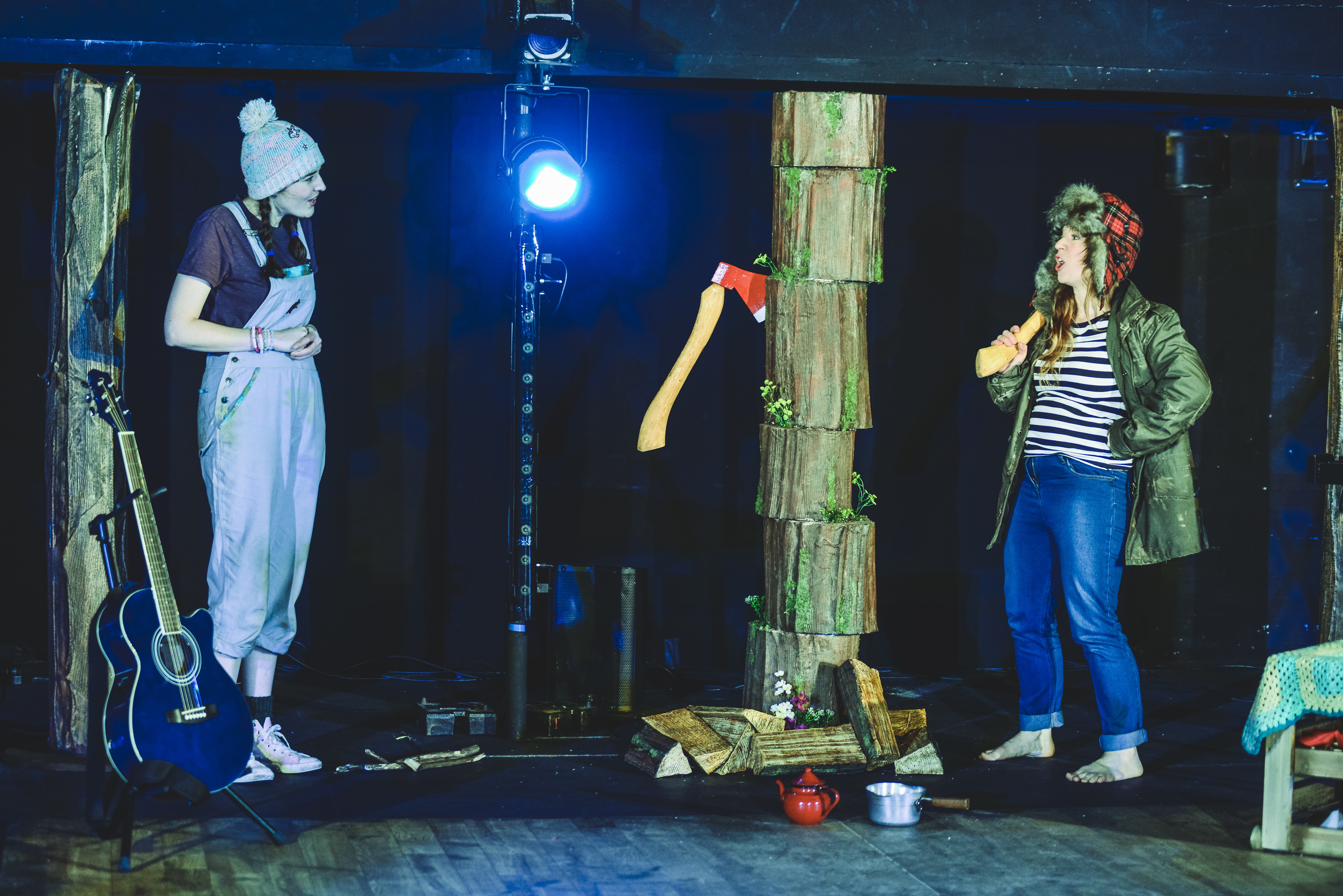 When Nene becomes ill, Aggie heads off to search for firewood – and meets a lady called Madam Ragana (again played by Mali Jones) living in the deep woods. She gives Aggie the magic porridge pot with instructions on how to make it cook and how to make it stop. The porridge is so delicious it “tastes just like a cwtch” (such a great line from the show!) and Aggie can’t wait to get home and make porridge for her mother. Nene is equally impressed with the porridge; so much so that one day when Aggie is not around she commands the pot to cook. However she doesn’t know how to make it stop and soon the whole town is flooded with porridge. It’s left to Aggie to show that teamwork and being kind can save the day. 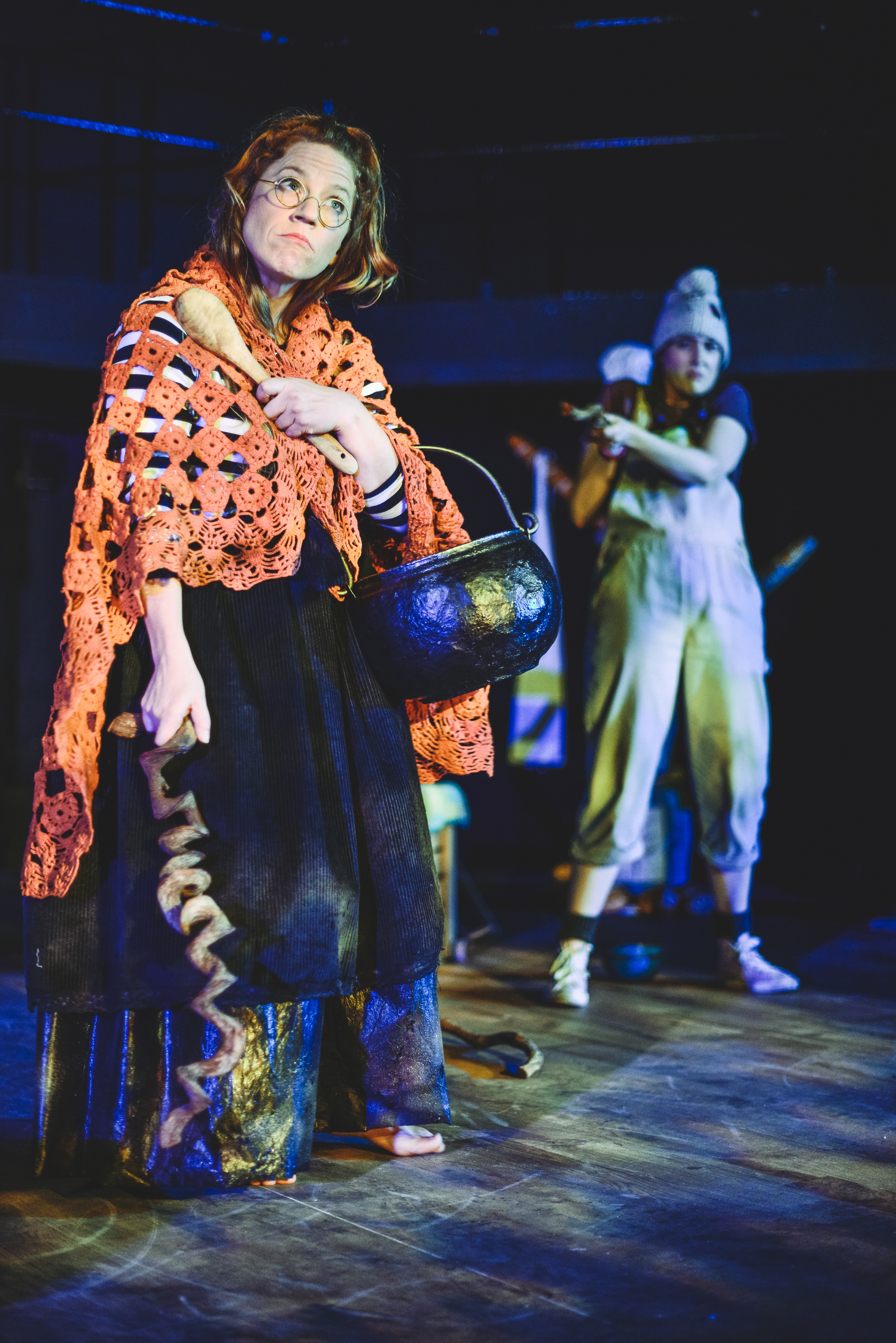 I always love how the Sherman’s children’s Christmas shows make full use of the performing space. At The Magic Porridge Pot the audience is sat around three quarters of the stage and even if you are on the sides (which we were) it doesn’t spoil the show at all. Props are minimal and dotted around the stage ready for use; as are musical instruments which the performers use during the specially-written songs.

My children are very nearly 8, 6¼ and 3¾ and there was plenty to keep all three involved and entertained. My eldest is on the cusp of being too old for the Sherman’s shows. I can imagine some of her more streetwise peers might not like it as much as she did; but she’s a huge theatre fan and loves the Sherman in particular so I’m hopeful we have a few more years where she will be happy to go along yet.

There were a few points where it was quite dialogue heavy and some of the younger children in the audience were starting to get restless but the show always managed to pull it back with a song or something humorous to regain their attention.

We left the theatre with a warm and fuzzy feeling and a reminder of what’s important in life. We are happy to report that The Magic Porridge Pot is another success from the Sherman Theatre, with this utterly charming and lovely production perfectly entertaining all five of us.

The Magic Porridge Pot and the Welsh language version Hud Y Crochan Uwd are at the Sherman Theatre until 30th December. Tickets cost £9 per person. For more information or to book call 029 2064 6900 or visit www.shermantheatre.co.uk

For the over 7s The Wind In The Willows is also running until 30th December.

WIN A FAMILY TICKET TO SEE
THE MAGIC PORRIDGE POT

One lucky Cardiff Mummy Says reader can see The Magic Porridge Pot for free thanks to this fab giveaway.

The prize includes a family ticket (two adults plus two children or one adult and three children) for any performance of The Magic Porridge Por or Hud y Crochan Uwd (subject to availability).

For a chance to win leave your answer to the following question on The Magic Porridge Pot post on the Cardiff Mummy Says Facebook page.

Q. What is the name of the little girl in the
Sherman Theatre’s production of The Magic Porridge Pot?

Closing date for entries is Tuesday 5th December at 11.59pm.