We had a brilliantly festive afternoon at The Village Hotel in Cardiff today for their Beauty and the Beast family pantomime lunch. Including a Christmas dinner, a pantomime and a visit from Father Christmas, it was great family entertainment for a good four hours. And if you like the sound if it, then there’s a chance to win a table for a family of four at the end of this review.

We arrived at the hotel, located just off the Cortyon roundabout at junction 32, at around 12.15pm, ready for the meal being served at 12.30pm.

Despite the formal hotel surroundings, the atmosphere was very casual and perfect for families. There was no pressure on the children to remain perfectly seated throughout. A lot of the younger children especially were way too excited to stay in their seats, so it was great that the compere had the kids up and dancing between courses. 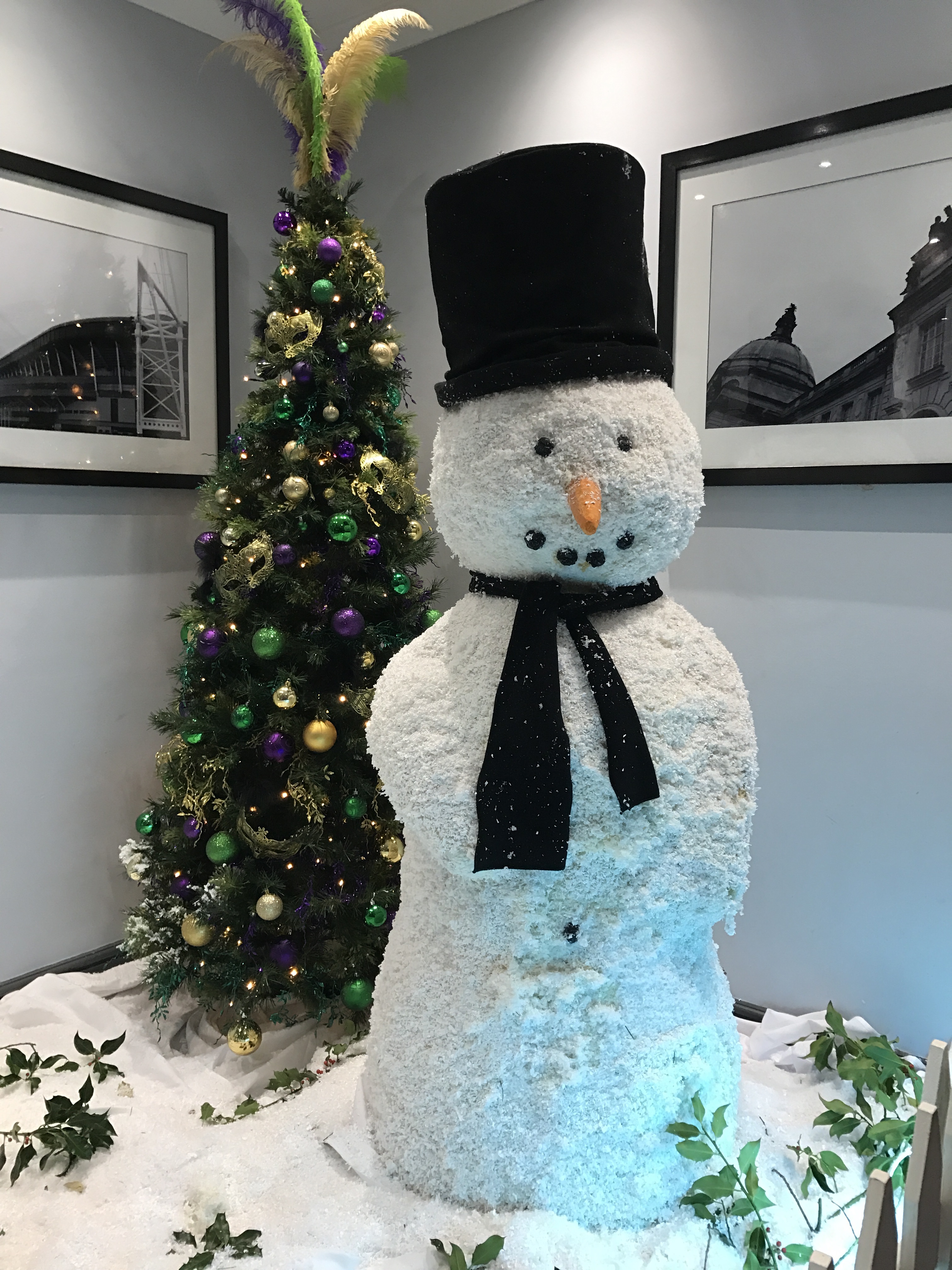 Guests were seated separately in their groups, on different-sized rectangular tables, rather than sharing tables with people we didn’t know. There were a number of larger groups of extended families and friends, but also a good number of tables such as ours with smaller numbers too.

The food came quickly and the portions were generous. For starters, the children were given small bowls of fruit while the adults had a delicious slow-roasted red pepper and tomato soup. 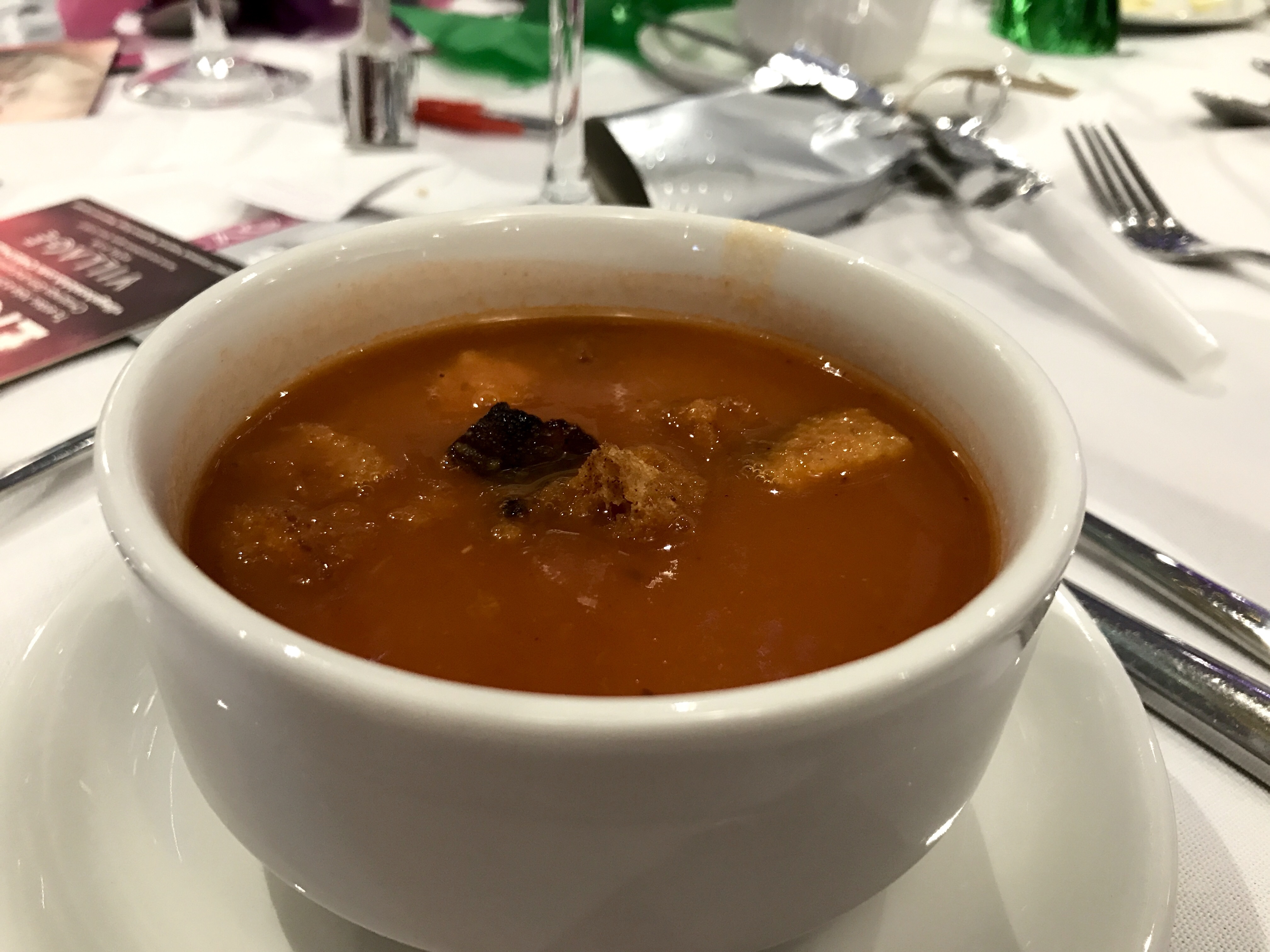 Children had a choice of a turkey dinner (which is what Toddler and Little Man opted for) or chicken nuggets, chips and peas (chosen by Miss E). 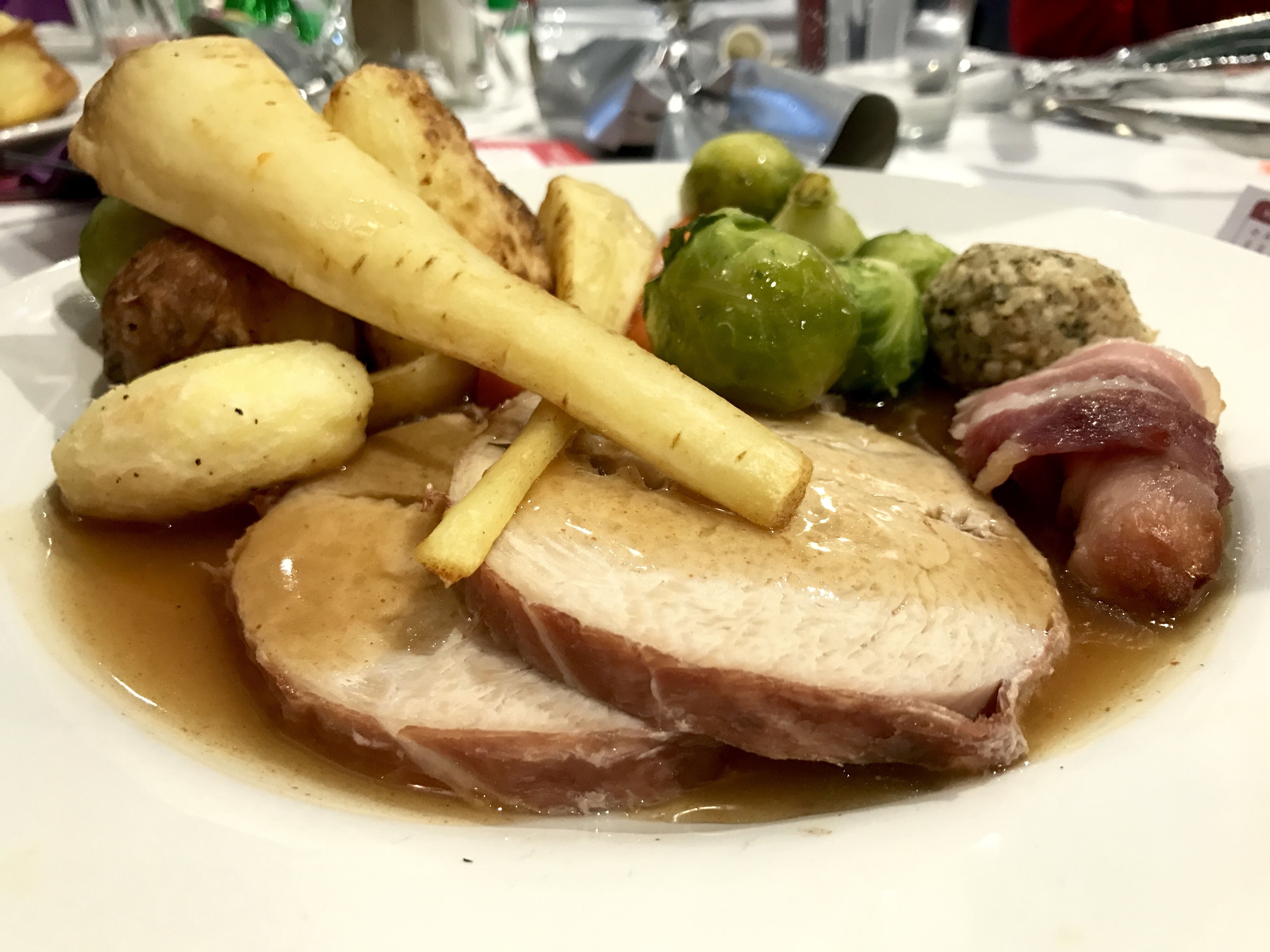 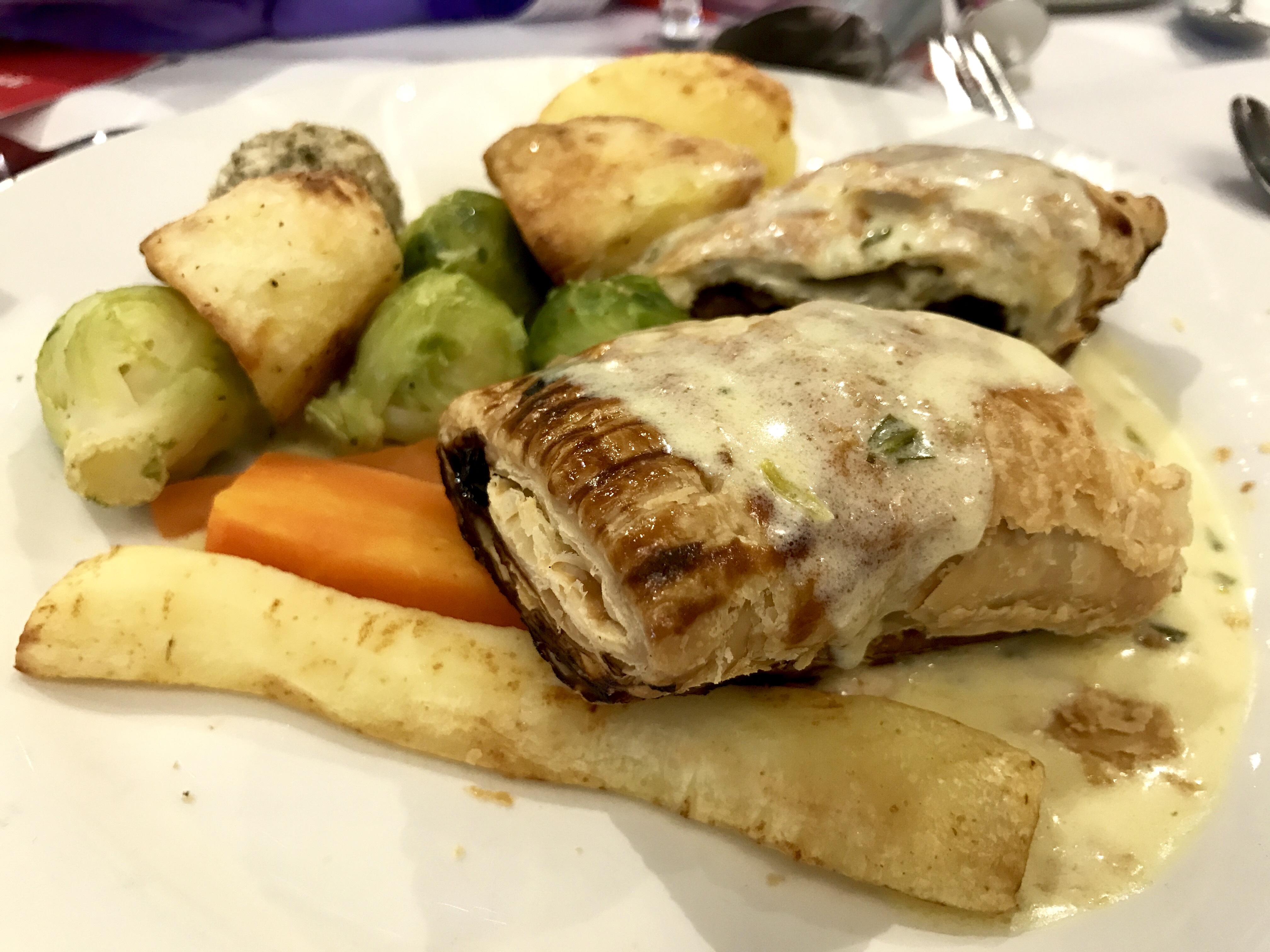 Being a vegetarian, I had a woodland mushroom, asparagus and butternut wellington in a cream sauce, again accompanied by roast potatoes, Brussels sprouts, honey glazed carrots and parsnips. I’m a real veg fan, so personally I would have liked a few more carrots and parsnips, but other than that it was a good veggie choice.

Dessert for the children was a little tub of ice cream sprinkled with Smarties, while grown-ups got a slice of Christmas Yule log. I’m afraid I didn’t get the chance to take a photo before Toddler grabbed a handful for himself!

After teas and coffees served from the bar area, the children were invited to sit on the floor in front of the stage ready for the panto to begin. 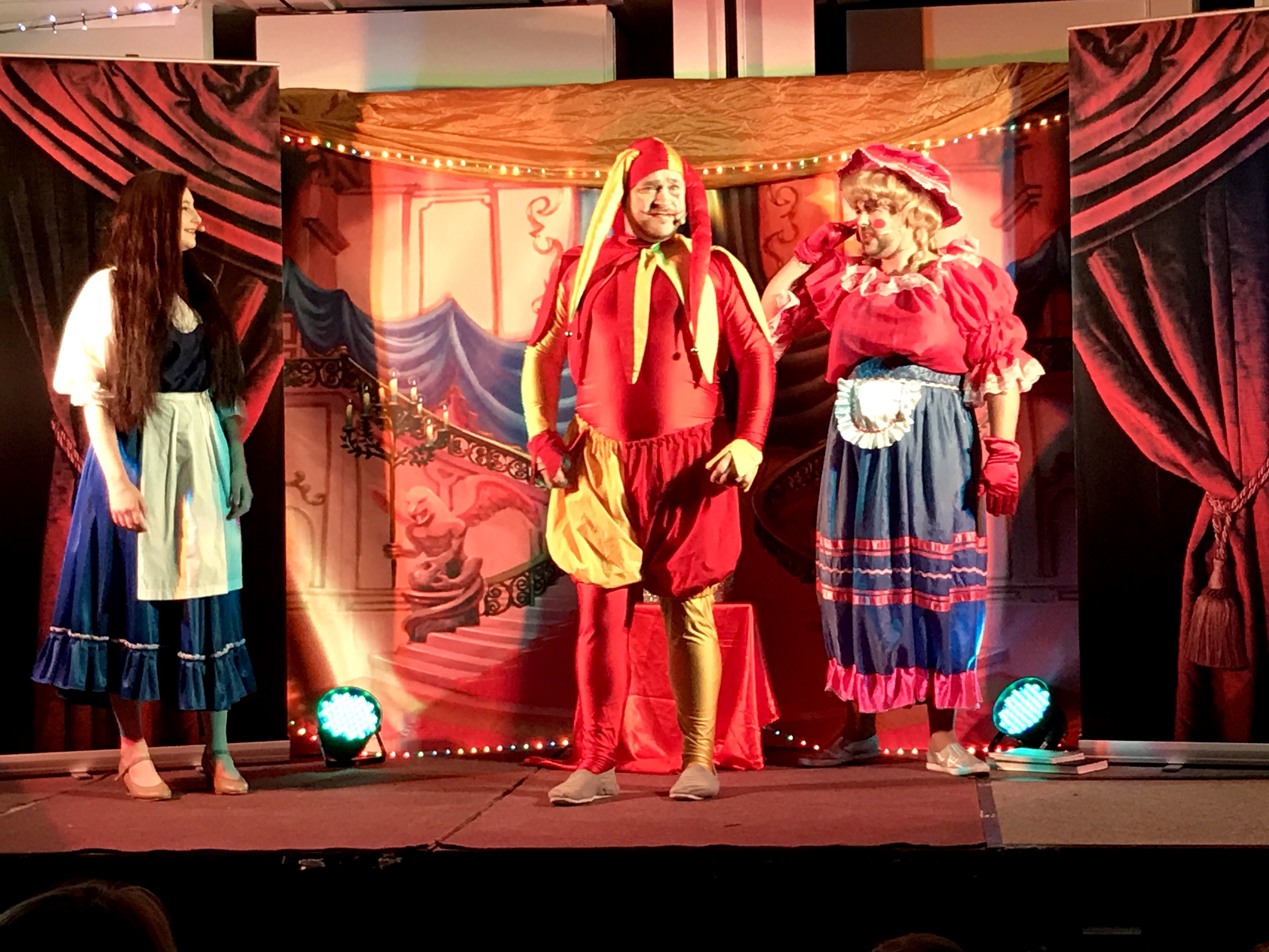 I have to admit, I was unsure what to expect from a panto taking place on a raised platform in a hotel suite. But it was absolutely brilliant! Created by Wize Productions/Hawthorn Entertainment, who specialise in producing touring theatre shows that can be performed anywhere, it had the young audience – not to mention the grown-ups too – captivated throughout.

We booed and hissed, we shouted “he’s behind you”, “oh, no it isn’t” and sang along to familiar pop songs as well as numbers from the Disney film too. The cast were all so enthusiastic and energetic and it was impressive to see just how entertaining a theatre show can be when just based on performance alone, without any of the usual special effects.

Rumpelstiltskin/Garcon stood out as a wickedly evil villain, relishing the boos every time he entered the stage. Panto dame Beyoncé (played by a man, in true panto style) was just brilliant. At one point, he/she came onto the stage dressed in a gold mini dress – which only made the obvious beard and tattoos even more hilarious.

Mid-way through the show Father Christmas visited and the show paused for a while so the children could meet the man in red and receive a small present from him. 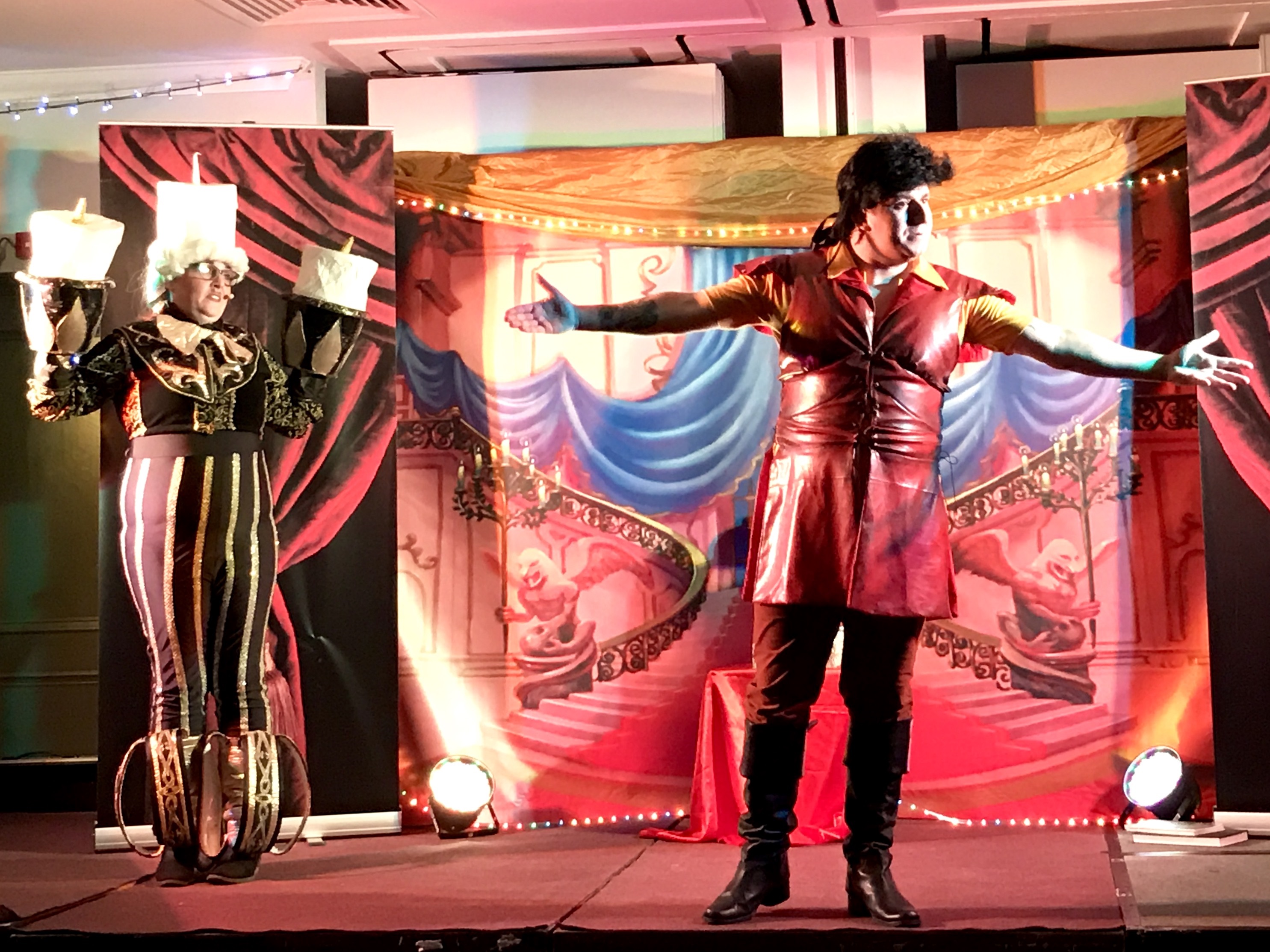 My eldest two children have been to a proper panto before, but not Toddler. I still think he’s too young for a full-scale professional one in a theatre, but he thought this one was great fun and really got into shouting at the characters on the stage. It was great for his age group.

The informal stage and seating meant parents didn’t have to worry so much if younger children got restless or started to wander. I can imagine for many of the children, it was their first experience of live theatre – and what a great place to start.

We felt the ticket price offered great value. Yes, the cost would add up for larger families, but considering you get a three-course meal, an hour and a half of panto, other entertainment, and a meeting with Santa over the course of four hours, it’s a good price for a festive treat.

A great afternoon of family entertainment, we loved it! 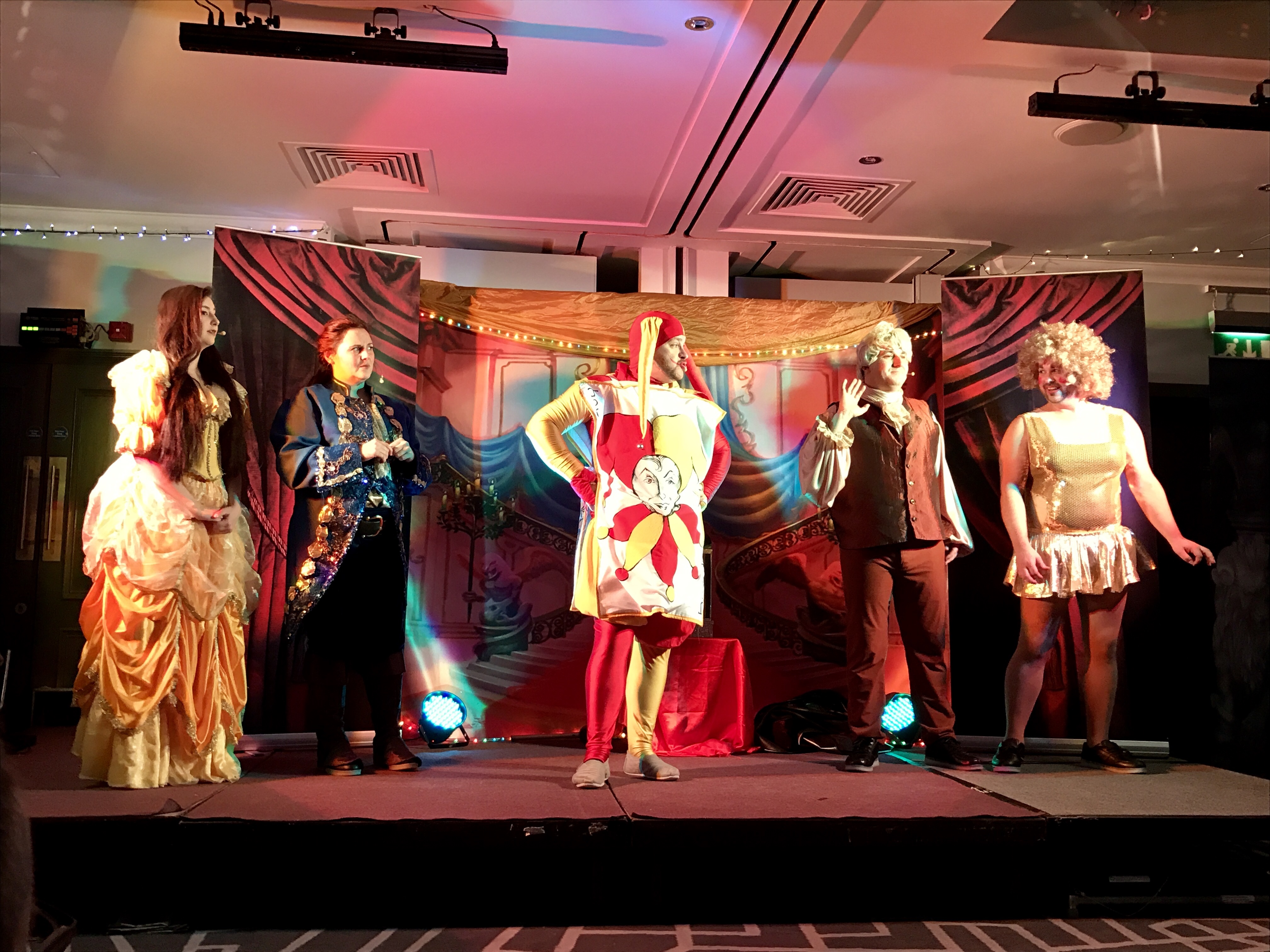 Thanks to the Village Hotel for inviting us along to review.

WIN A FAMILY TICKET FOR THE VILLAGE PANTOMIME LUNCH

ON WEDNESDAY 21st DECEMBER, from 12pm

The Village Hotel Cardiff are offering an amazing prize to one lucky Cardiff Mummy Says reader! One family of four will be treated to an afternoon at the Village family pantomime lunch on Wednesday 21st December.

The prize includes tickets for two adults and two children and you will enjoy a Christmas dinner, entertainment, plus the pantomime Beauty and the Beast.

Q. At which major junction of the M4 is the Village Hotel?

You can buy additional seats at the regular price, subject to availability. The prize is valid only on the stipulated date. There is no alternative prize.

The winner will be drawn at random from all correct entries posted before the closing date and will be contacted via the Cardiff Mummy Says Facebook page.

Homepage » Cardiff » Beauty and the Beast family pantomime lunch at the Village Hotel Cardiff – plus win a table for a family of four!

2 Comments to Beauty and the Beast family pantomime lunch at the Village Hotel Cardiff – plus win a table for a family of four!