All three of my children love the first two Hotel Transylvania films. Their fascination surprised me initially because they are usually really sensitive when it comes to films with even the slightest amount of spookiness or mild threat. However there’s something about the series in which Adam Sandler plays widowed dad Dracula and Selena Gomez his daughter Mavis that has captured their imaginations and both films are regularly requested for our family film nights.

They have been eagerly anticipating the third film in the franchise – Hotel Transylvania 3: A Monster Vacation – ever since they saw the posters several months ago. And this morning we got to watch it at the Odeon cinema at the Red Dragon Centre in Cardiff Bay as part of our family blogger ambassador role at the entertainment complex.

At the Odeon adults pay children’s prices for children’s films with a family ticket. Plus children seeing Hotel Transylvania 3 can claim a free pack of stickers (subject to availability). There’s free parking for customers subject to minimum spend and ticket validation, plus plenty of ‘children eat free’ offers at The Red Dragon Centre’s many restaurants.

You can read more here in my summer blog for The Red Dragon Centre where you’ll also find news of free family events at the centre this summer holiday including the return of Echo the Eco Dragon to celebrate the National Eisteddfod coming to Cardiff Bay. Made entirely from recycled materials, Echo will be outside the centre between 1 and 12 August, providing great outdoor fun for families and visitors of the Eisteddfod for free. The creators of Echo, Eggseeds will also be on hand daily between 12-5pm so families can find out more about how he was made.

You can also meet a baby dragon duo and their handlers on Thursday 9 August. Carefully hatched from their eggs at a small dragon sanctuary in the Welsh Marches, they are friendly to humans and well mannered, although a dragon is never entirely predictable….

Plus between 12pm and 4pm on Bank Holiday Monday 27 August children can take part in a free RDC Eco Kids seed planting workshop and decorate their own cup or butterfly pots and plant their very own cress seeds to take home – where they will soon see fast results.

So did Hotel Transylvania 3: A Monster Vacation live up to expectations? Here’s what we thought…

The third film opens with a flashback to 1897 when Drac manages to outwit his arch enemy Van Helsing (voiced by Jim Gaffigan) in an attempt to kill him.

Cut to the modern day and running a hotel has left Drac so exhausted that Mavis decides to book the family onto a cruise especially for monsters so that they can all recharge and spend quality time together. We also discover that Drac is lonely. He was widowed 100 years ago and – now that Mavis is all grown up and has a son Dennis with her human husband Johnny (Andy Samberg) – he longs to meet someone.

As the whole monster gang board the ship it isn’t long before Drac sets eyes on captain Ericka (Kathryn Hahn – best known to many of us as Carla in Bad Moms). He gets a “zing” – the monster equivalent of love at first sight – and is persuaded by his monster friends to talk to her and she likes him too. 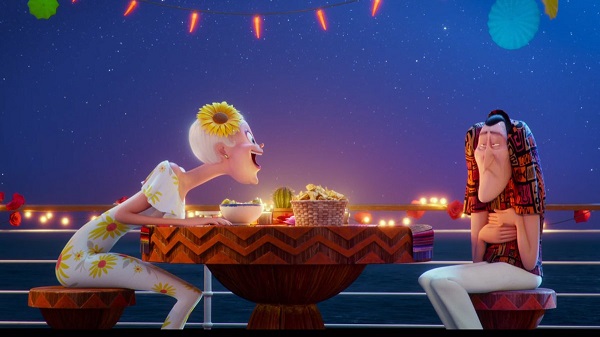 However, all is not what it seems and it turns out Ericka is the great granddaughter of Van Helsing who is hiding below deck and has kept himself alive with a mechanised body. Both are intent on killing Drac and the entire monster population. But as Ericka gets to know Drac she begins to question whether monsters are really as bad as her great-grandfather has brought her up to believe.

This is such a difficult question to answer because what will terrify one child will leave another laughing. The film is rated Universal although I’d say at times it’s more of a PG. The scene at Atlantis had some tense and dangerous moments; and the modern day Van Helsing with his robot body was a little freaky. My four-year-old didn’t like the sea monster at the end of the film, a kracken (voiced by Joe Jonas of Jonas Brothers fame) whose multiple limbs scoop up various characters and tries to eat them while smashing up the venue the monsters are partying in. But other than that my three were fine. The scary bits were quickly followed by jokes and humour so they soon forgot about them.

Hotel Transylvania 3: Monster Vacation isn’t bad as sequels go. It’s not the strongest storyline of the three films – but there’s plenty for children and adults to enjoy. It’s funny in parts with great one-liners my children have been quoting all day. It’s slightly spooky and has a lovely overall theme that whether we’re monsters or humans we are all the same.

There are a few references to parents needing time away from their children and I had to laugh when Wayne and Wanda werewolf stumble upon the on-board kids’ club and realise they can leave their hundreds of cubs there. “What do we now?” they question. “Anything we want.”

Perhaps the best judge of the film are the children themselves and two of my three whispered to me mid-way through that it was brilliant. And they’ve already said they’re going to save up their pocket money so that they can buy it when it comes out on DVD.

I think that means they enjoyed it!

Have you seen Hotel Transylvania 3: A Monster Vacation? I’d love to know your thoughts either in the comments below; on the Cardiff Mummy Says Facebook page; or you can tweet me on @cardiffmummy