I took this photo of my children earlier today getting creative with paints and cookie cutters. An image of a calm, stress-free activity, where we all sat around creating pretty pictures and laughing happily, right? 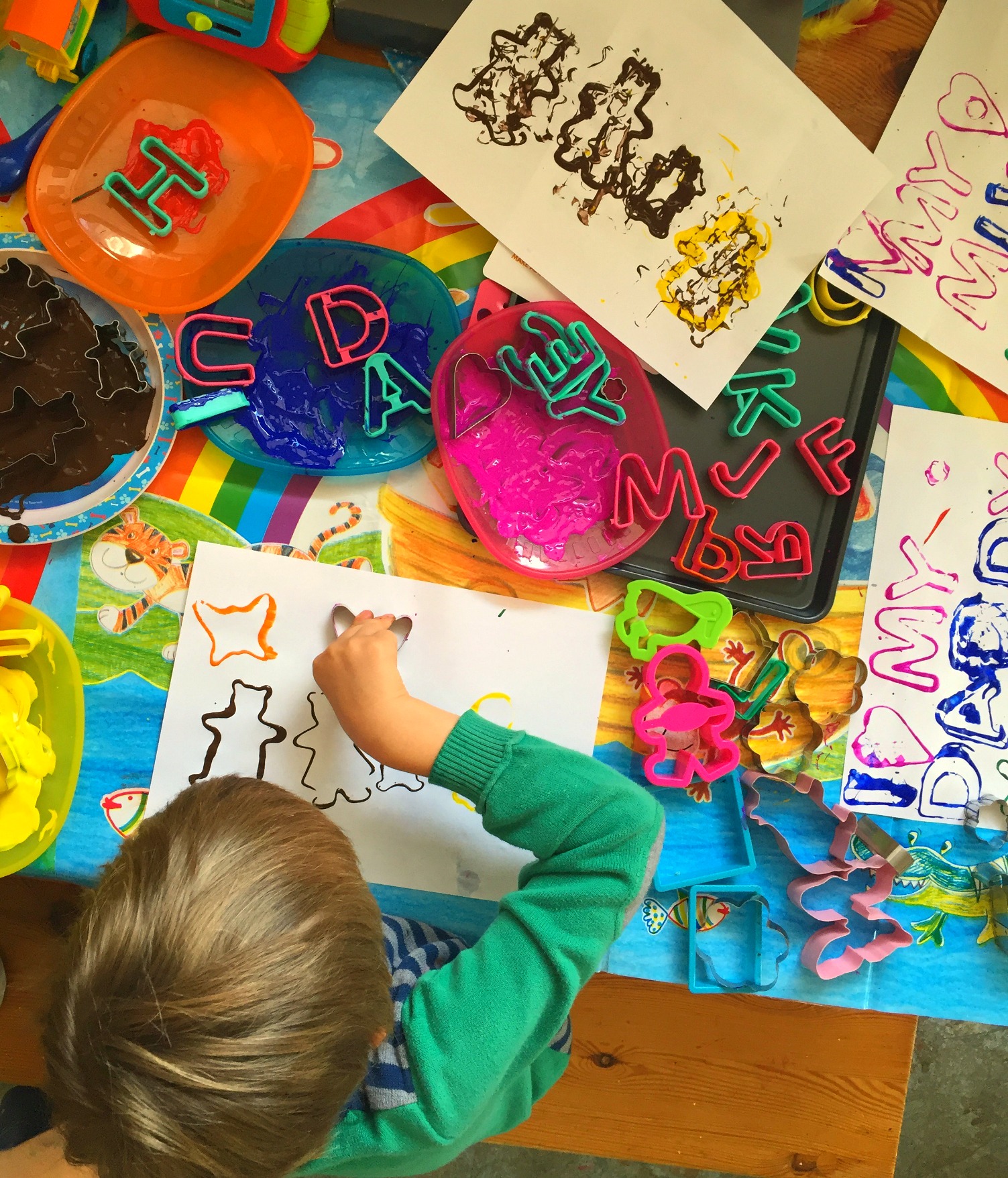 It was like that for about four minutes. But the rest of the time was utter chaos.

Toddler Boy I, my two-year-old youngest child, decided to wheel one of his toy trains through the paint – fine, I don’t have a problem with that if he’s enjoying it as the paint will wash off. But then he got a little carried away and started rolling the paint-covered wheels over me. We soon put a stop to that little game… causing him to have a meltdown. 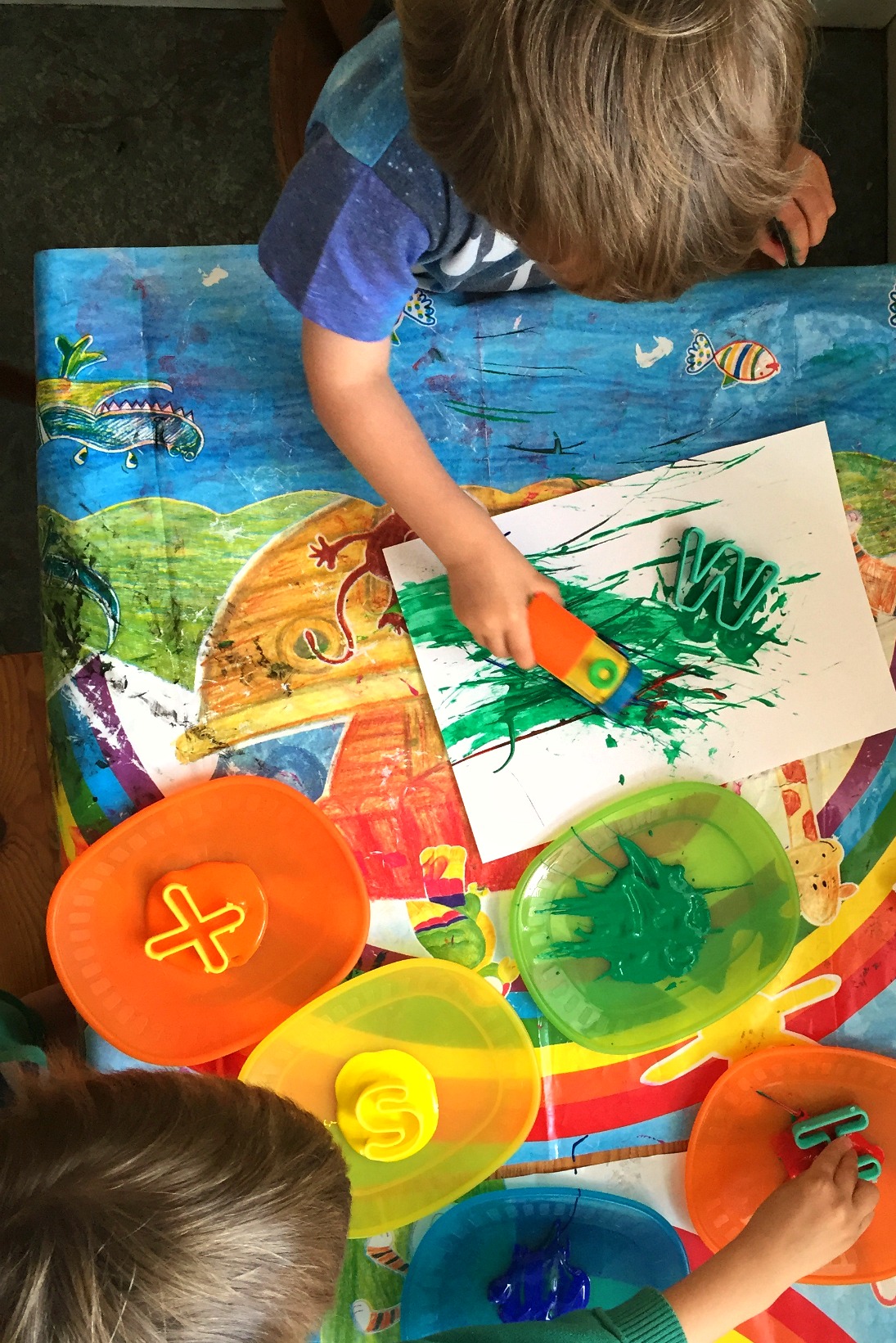 When he calmed down, he picked up some of the letter cutters his big brother was painting with and started dipping them in the paint. So far, so good. Until he got a bit bored of this, got down from his seat and started trying to print them on the wall and on me again. I reminded him what he was supposed to be doing, but painting Mummy was much more fun. So I gave him a paintbrush, he dipped it in paint… and tried to eat it, but not before making a splodge on the painting Little Miss E, his 6.5-year-old big sister, had been working really hard on. Cue tears and melodramatic wails of everything being ruined and so unfair.

Little Man O, their 4.5-year-old brother, chose this very moment to spill the pot of water he was using for cleaning his paint brush all over the table, ruining his work of art. I had two big kids crying, a toddler running around with a paintbrush in his hand and paint all over his face, and murky paint water dripping everywhere.

I managed to placate the situation and restore an air of calm (ie, after all their hands were washed, I put the TV on while I cleared up the mess alone). I used a couple of baby wipes to get the paint off my clothes (because, let’s face it, there would be no point putting clean clothes on just before tea time chaos).

When their daddy got home from work, they proudly showed him the art works they had created. I could have basked in my glory of being super mum, painting with three kids. But instead I confessed all and told him about the chaos. He probably would have guessed anyway, as I’d missed some paint splodges on the floor.

I could have posted the photo on social media, presenting myself as one of those ‘perfect parents’, breezing through motherhood with fun and educational activities and never getting a hair out of place.

But instead, I thought I would be completely honest. Because as much as I adore looking at pretty pictures on Instagram and Pinterest, I do sometimes come away feeling a little bit crap that I don’t live in a minimalist monochrome house, where my kids coordinate with the décor.

I asked some of my blogging chums whether they would share the truth behind some of the ‘best bits’ they presented on social media. They were more than happy to oblige.

Alana, who blog at Baby Holiday, has just become a mum for the second time. She’s posted some beautiful photos of her family of four, like this one. 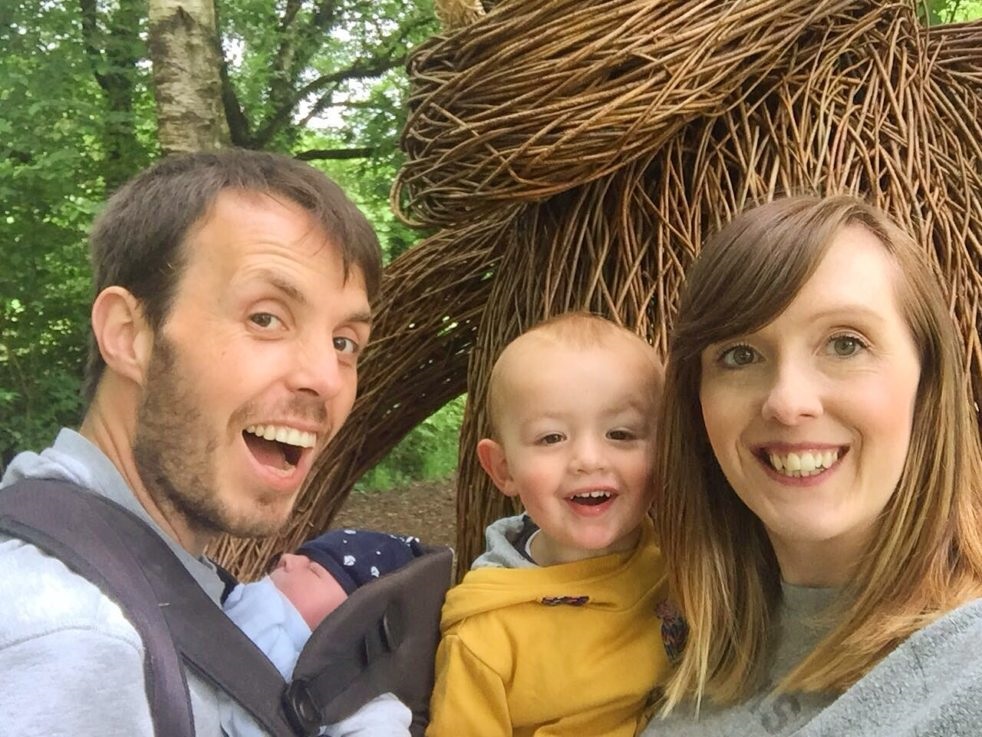 Alana, who blogs at Baby Holiday, and her family

But as she details in this honest post, at times it has been utter chaos. As she writes, “between the lovely Instagram photos of smiling children and happy parents real life is happening.”

But as much as it’s becoming more common to detail the downs of parenting, as well as the ups, I don’t see so much on Instagram and Pinterest.

Here’s Jess who blogs at Mrs Helicopter Writes, pictured with her son and the healthiest of healthy packed lunches, as part of a media campaign she was taking part in. But the truth is not what it seems. As she says in this post, he was a very fussy eater for years. She adds, “Gus’s pack lunch may have SOME of these items but he ALSO has a biscuit and crisps in there too.” You can read more about the picture here. 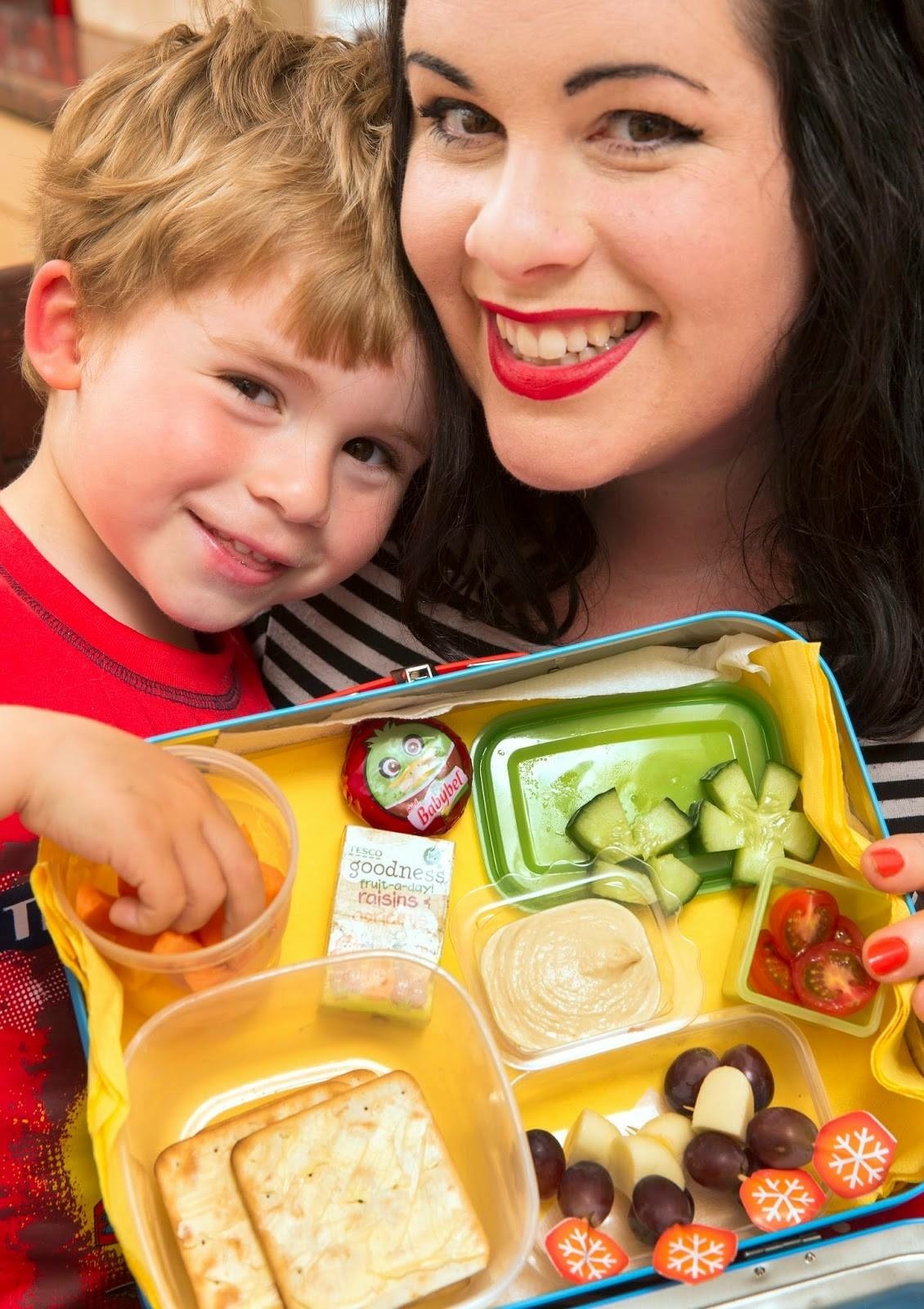 Sally, who blogs about life as a grandmother at Teddy Bears and Cardigans, admits to cropping out or removing clutter and mess. Here is her grandson exploring under the table. But a quick bit of zooming in and the loo rolls and random boot in the background disappear. 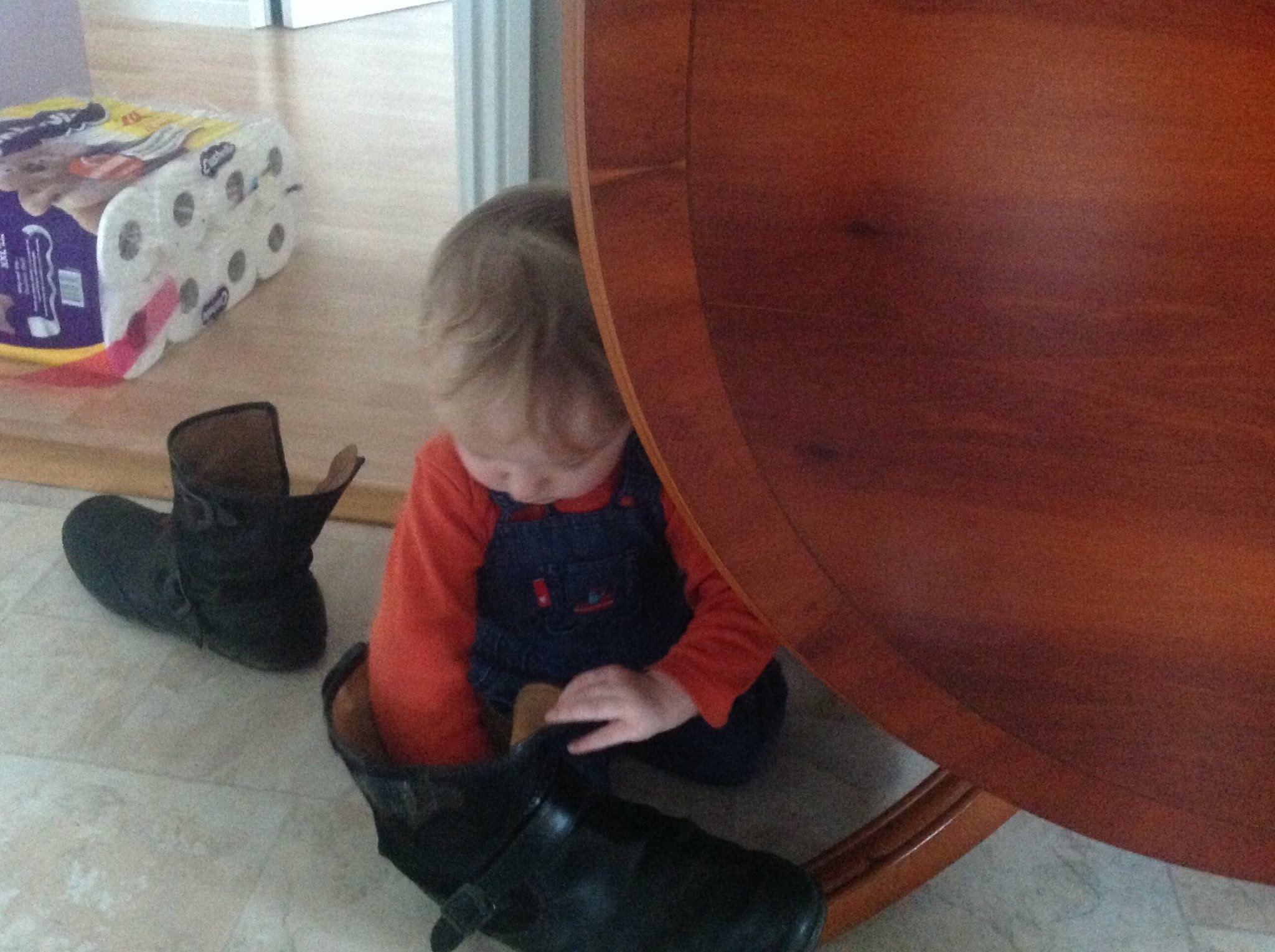 Same with this shot of Bear brushing his teeth in the bathroom. She retook the photo to remove the overflowing bin and cropped out the patches on the wall. 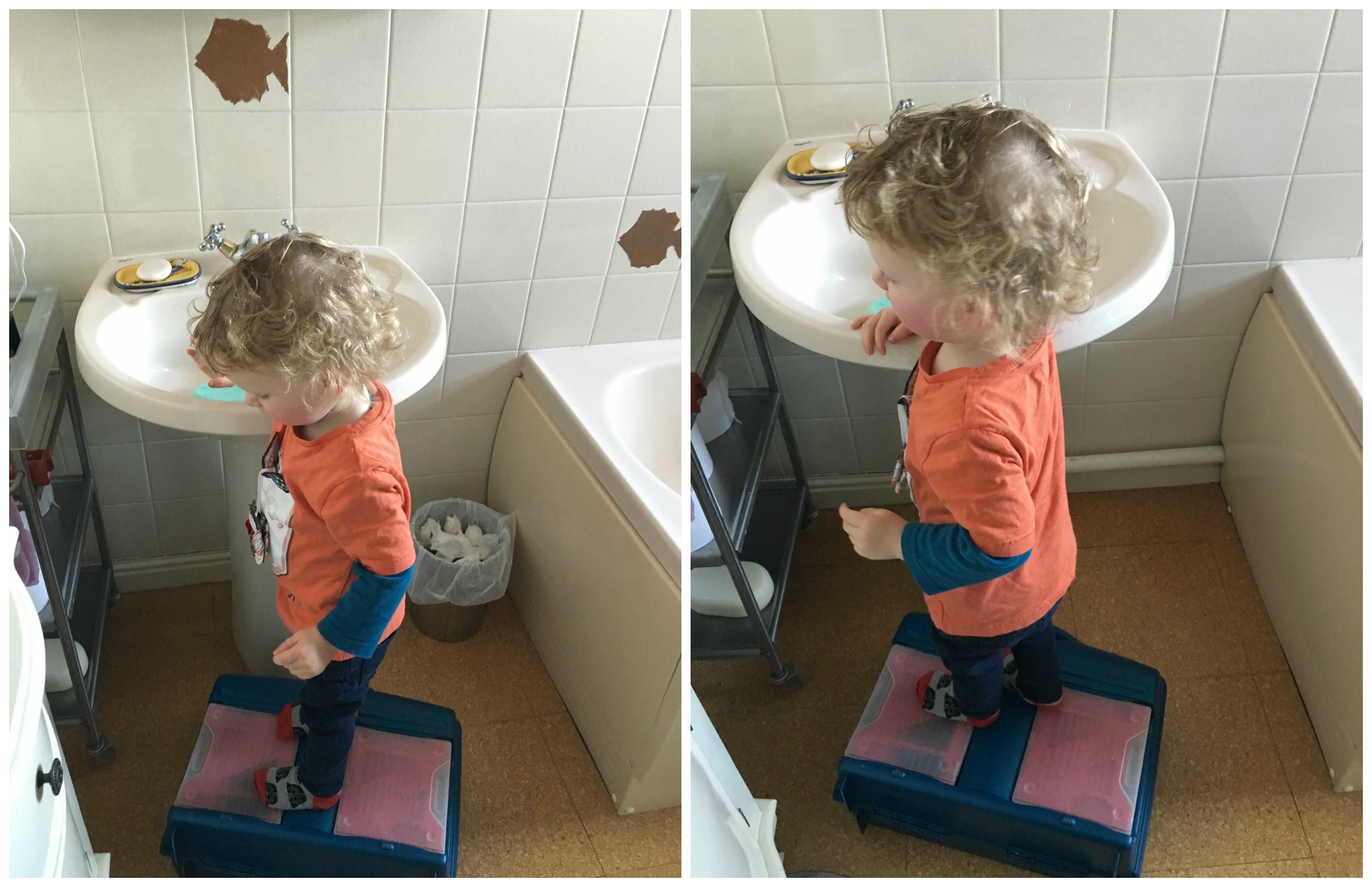 Deborah is a mum of eight and writes the frankly brilliant Family Days Tried and Tested blog and Facebook page, which is full of wonderful and inspiring ideas of kid-friendly activities and places to visit. She sums it up perfectly in this picture, showing what you see on Instagram and what you don’t. 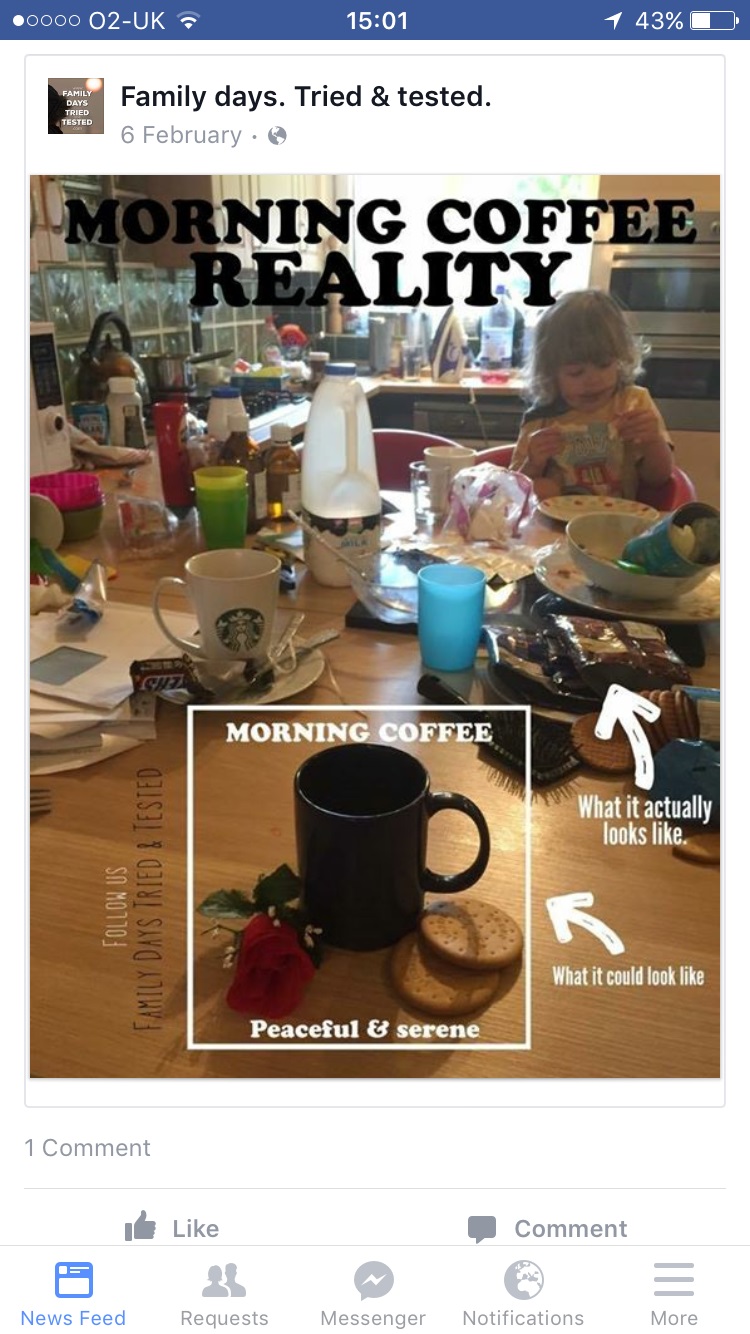 I’m not saying we should all start photographing our messy and untidy houses, or completely stop posting cute pictures of our kids smiling and playing happily. I love seeing pictures of my friends’ children, as so many of them don’t live locally. And I turn to Instagram and Pinterest as inspiration and because I want to look at pretty things, especially when news and current affairs is getting me down so much.

We just need to remember to take everything we see with a pinch of salt and visualise the tantrumming kids or untidy houses taking place around what we have been invited to see.

Are you guilty of showing only your best bits on social media sites such as Instagram and Pinterest? Or do you take a warts-and-all approach? I’d love to know what you think in the comments section below, on the Cardiff Mummy Says Facebook page, or you can tweet me on @cardiffmummy

Do come and follow Cardiff Mummy Says on Instagram. But remember that behind every beautiful photo is a tale of tantrums, meltdowns and goodness knows what else!