I was so relieved to see the sun shining this morning. After yesterday’s non-stop torrential rain, I was worried for the young cast of Disney’s Beauty And The Beast Junior. Everyman’s annual open air theatre festival is a big event in the Cardiff theatrical calendar, amateur or otherwise. Yet while the audience are under cover, the performers are exposed to the elements. I’ve seen them battle on in a downpour before, and although they always carry on regardless, it’s so much nicer for all involved when the weather is good.

I don’t think they will be so lucky for the rest of the week, but today at least, we had a fantastic time in the sunshine watching Beauty And The Beast Jr on a specially-constructed stage in the beautiful grounds of Sophia Gardens.

This junior version is a family-friendly adaptation of the successful stage musical, which itself is based on the Oscar award-winning 1991 Disney animated film. At an hour in length and with no interval, it’s perfect for young children. Little Miss E, my 5½ year old daughter, and Little Man O, her 3¾ year old brother, loved the show. As did I. And I must confess to shedding a few tears at the end. 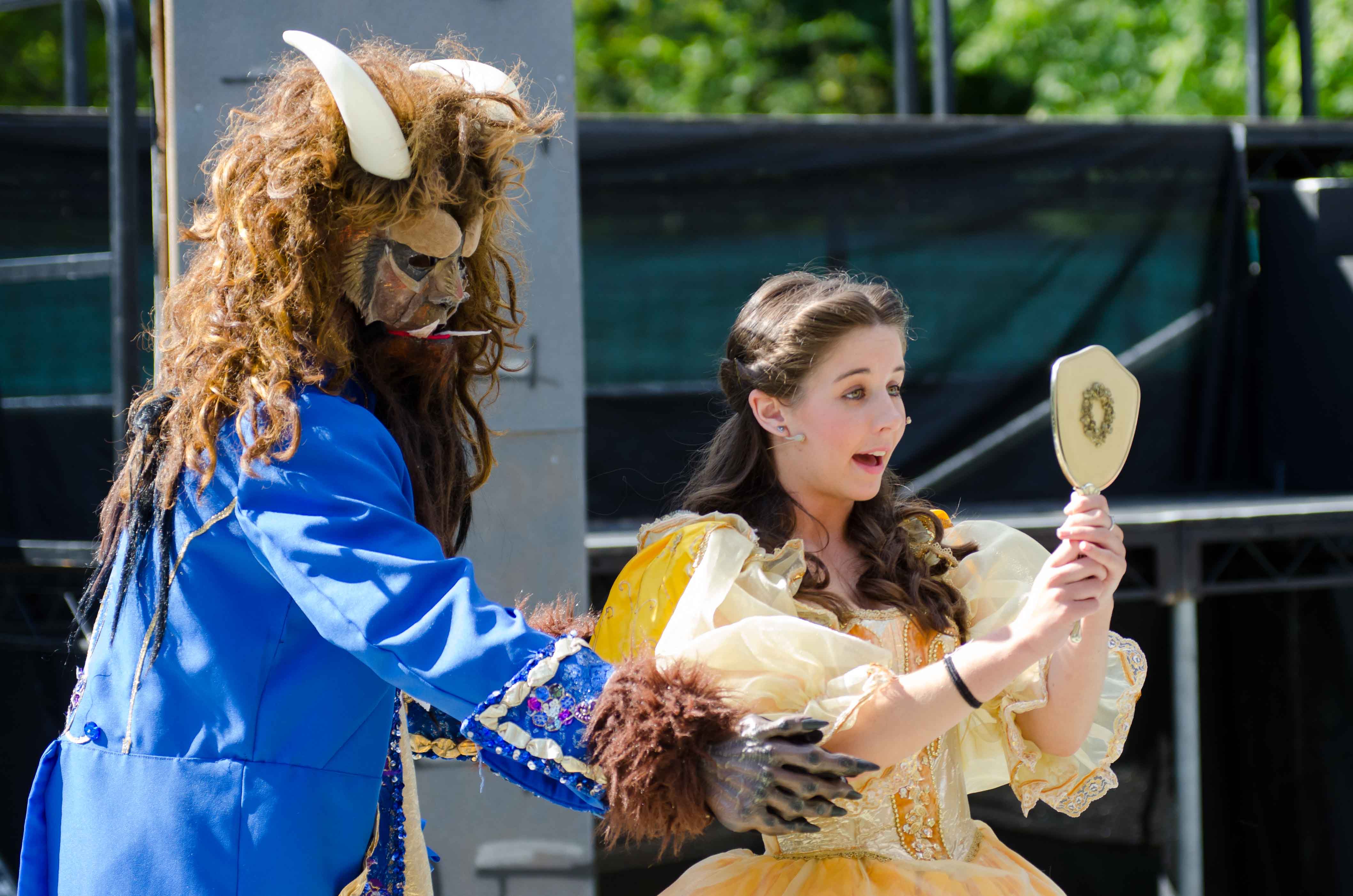 I was worried my children would be scared of the Beast. There were a few moments where they got slightly frightened, but it was nothing a cuddle from mummy didn’t solve.

The rest of the show was bright, confident and very entertaining, bringing the magic of one of Disney’s best-loved musical animations to the stage at affordable prices. The small-scale auditorium worked well. It wasn’t too overwhelming for younger children, and everyone had a good view of the stage and cast.

Charlotte Tonge and Ben Joseph Smith played the lead roles of Belle (the Beauty of the show’s title) and the Beast/prince. The young pair are both endearing performers; Charlotte combined Disney-esque innocence with a good kick of sassiness. Ben did a good job of conveying the different aspects of the Beast’s personality as he transformed from sinister and mean to loving and kind. 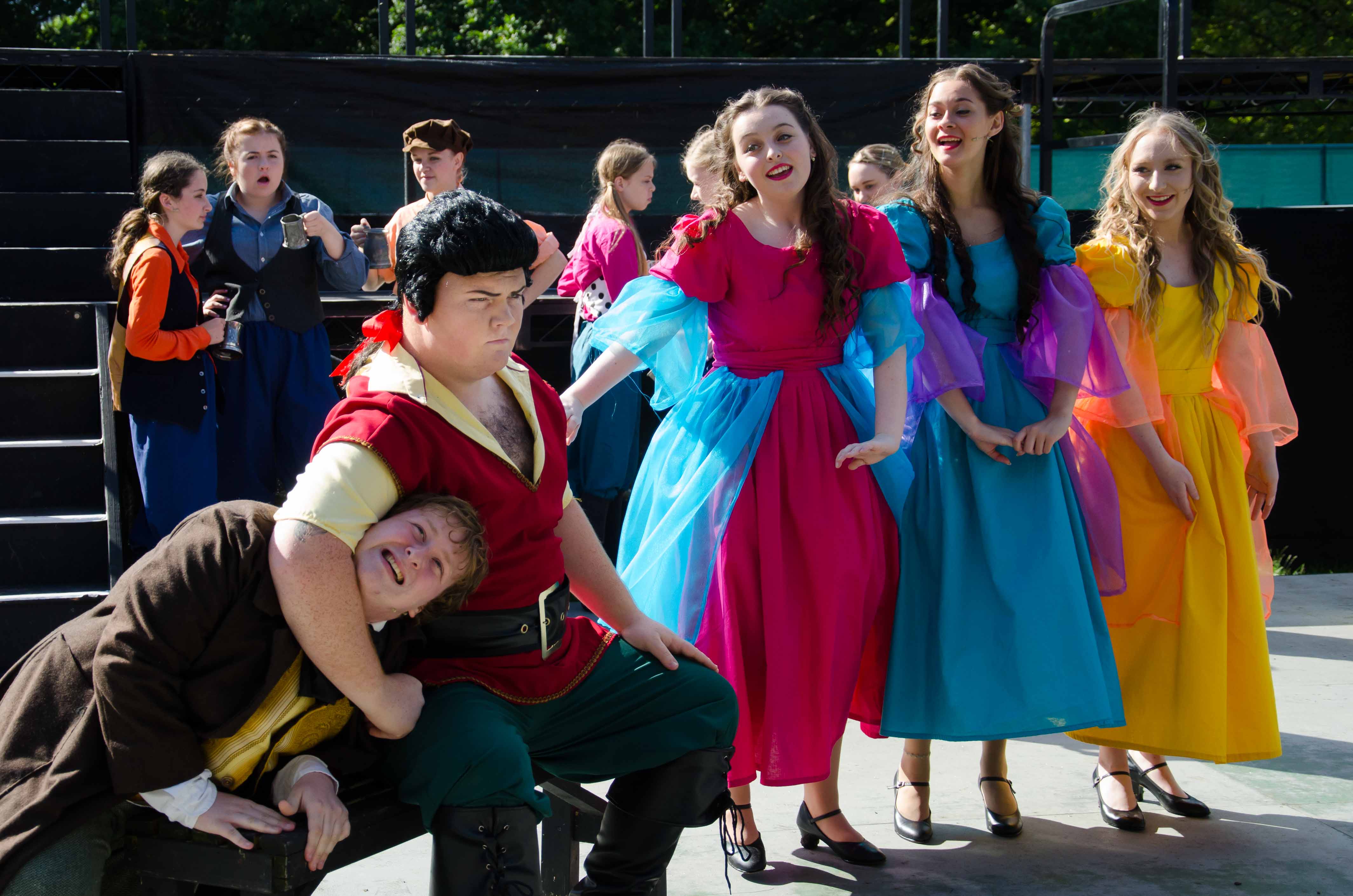 Ross Broad was perfectly cast as Gaston, the egotistical anti-hero who wants to make Belle his wife, even though she has no interest in him. He looked like he was having great fun in the role and I loved his interactions (pictured above) with his sidekick Lefou (Ethan Price) and the three silly girls (Cadi Mullance, Alesha Nazareth and Shannon McCarthy), particularly during the musical number singing his praises, Gaston.

My favourite characters in the film have always been the supporting cast of household-staff-turned-household-objects, and it’s no exception here. Kerry Dwyer as Lumiere particularly stood out, delivering her one-liners with great timing and plenty of confidence. Helen Flannigan, who played Mrs Potts was as warm and welcoming to Beauty as the teapot she plays. She gave a great rendition of her solo Beauty and the Beast, as the two main characters began to fall in love. Her son Chip, played today by Rebecca Tonge (sister of Charlotte), was every bit as adorable as in the film. She has a great stage presence, despite being the smallest member of the cast. 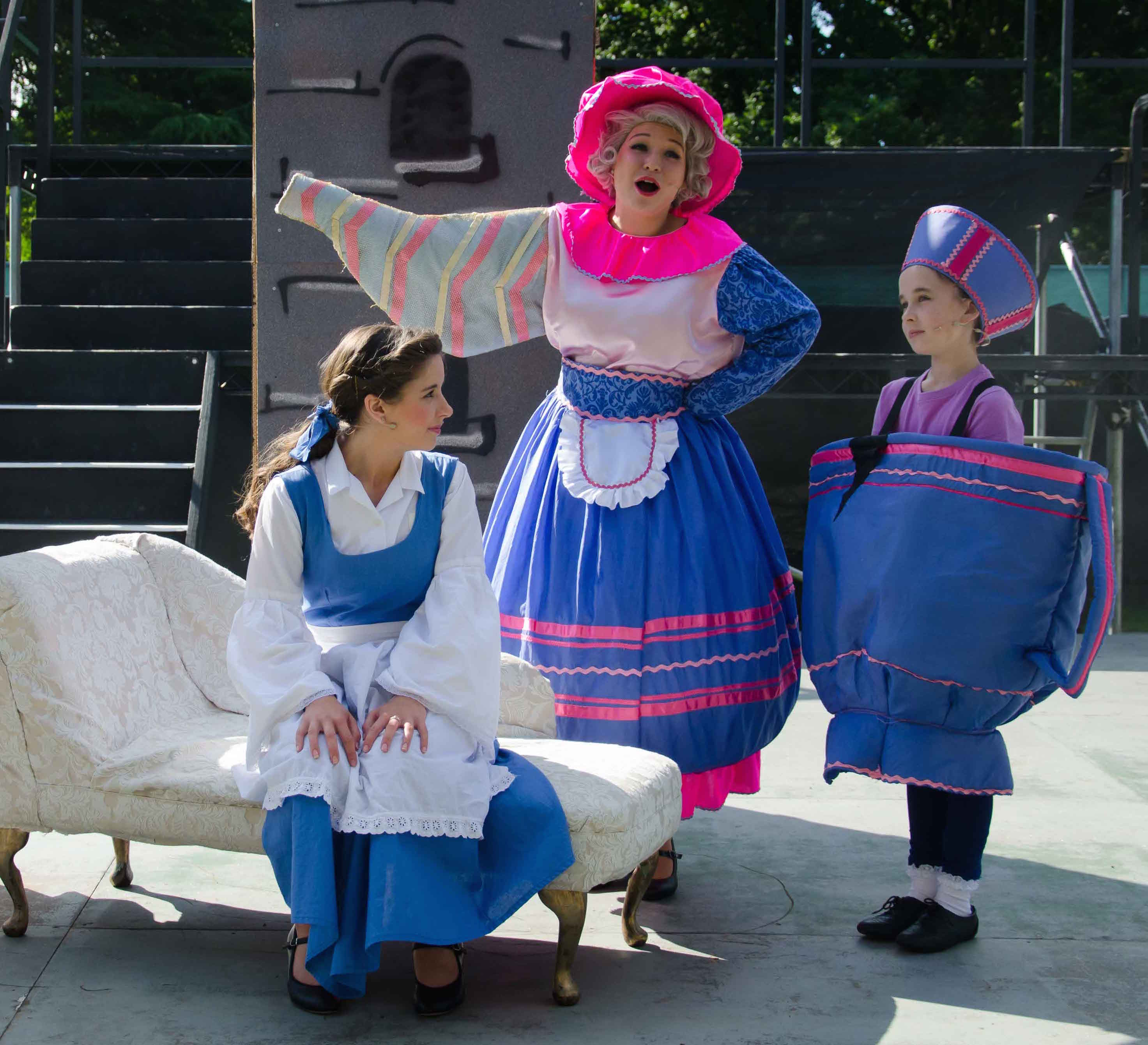 I was amazed that Little Miss E, completely unprompted, recognised several of the cast from last year’s show, The Little Mermaid Jr (which I reviewed for Theatre Wales here) and knew exactly which roles they had played. Such is the power and long-lasting impact of live theatre!

There were some strong individual performances, but what I loved about this show was how much of a team effort it was. The chorus numbers were bold, colourful and filled the stage, in particular Be Our Guest, complete with dancing cutlery and plates. I also liked the way the chorus formed the trees in the forest by wearing brown and green tabards. A great way to portray the woods when you don’t have access to expensive props. 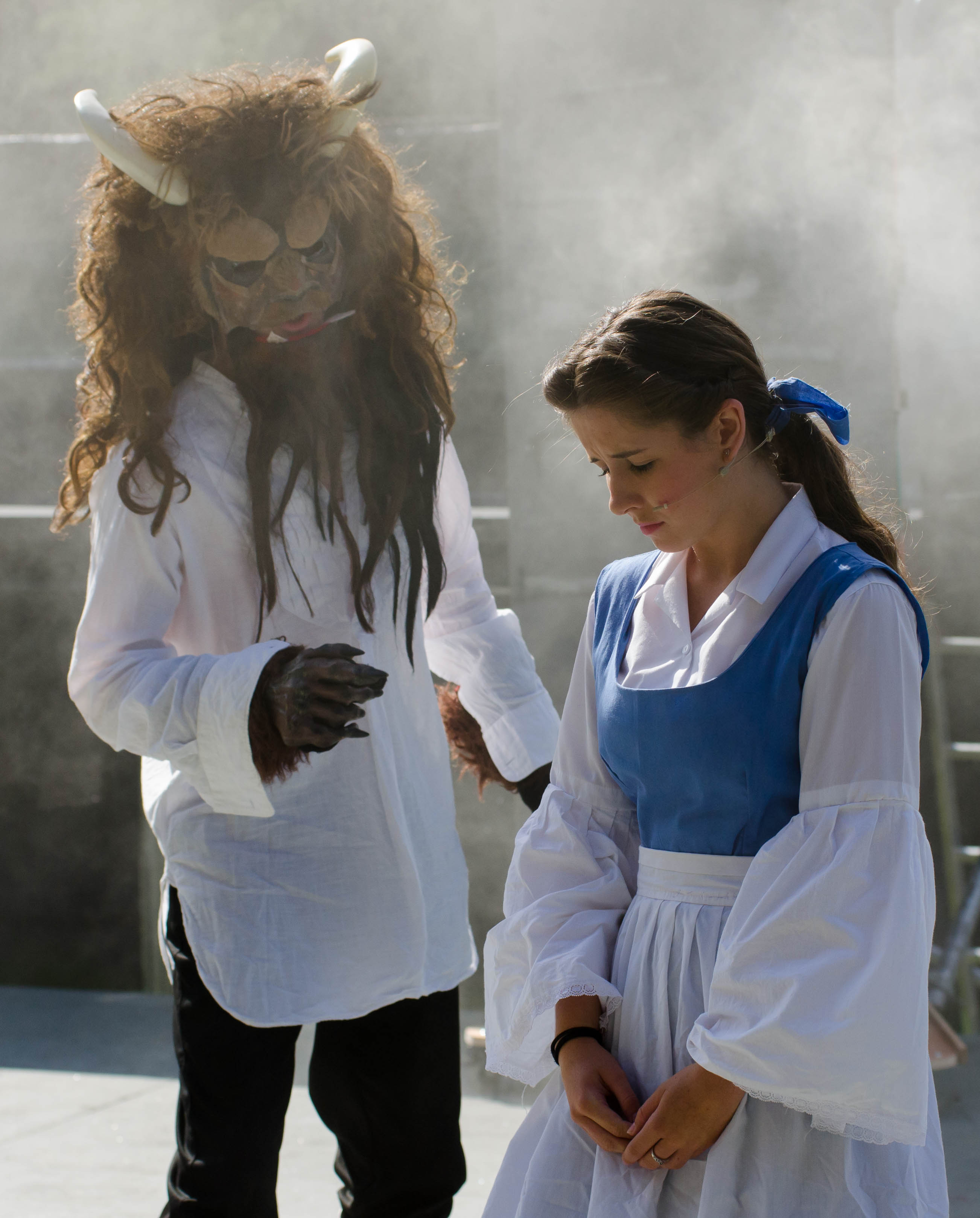 As in previous years, the principle cast members were waiting to greet the audience as we left the theatre, posing for photos and chatting to the children. A really nice touch. Miss E was especially thrilled to get a cuddle from Belle herself.

No, it isn’t the same as a lavish big-budget professional Disney theatrical production – but it was incredibly entertaining all the same. When you don’t have the expensive scenery, props and special effects to rely on, you need strong performances. What this show lacked in theatrics, it more than made up for with a passionate and talented cast, whose enthusiasm was so infectious you couldn’t help but enjoy.

This is great family entertainment for the summer holidays – I just hope the weather is kind for the rest of the run.

Disney’s Beauty and the Beast Junior is showing at Sophia Gardens tomorrow, Sunday 26th July, and Tuesday 28th July until Saturday 1st August as part of Everyman Open Air Theatre Festival 2015. The weekend performances are already sold out, but if you’re quick, there are still some left for the week day ones, priced £8 per person or £25 for a family of four.

If you’re thinking of taking your children to the theatre for the first time, here’s my 12 top tips.

Disclaimer: we were given three tickets for review purposes.

All photos from the production by Keith J Stanbury.

4 Comments to Review: Disney’s Beauty and The Beast Jr by Everyman Theatre