We paid for our tickets to School of Rock ourselves and the theatre did not know we would be writing this review.

This review was originally written in July 2018. I’ve updated it today after the news that School of Rock the musical is coming to Wales Millennium Centre in Cardiff on its first UK tour, from 12-17 April 2021. My children are going to be so excited when I tell them after school today! I can’t wait to see it again! More info on the Cardiff performances here.

Ever since Father Christmas bought my middle child the School of Rock DVD for Christmas a few years ago, our whole family has become obsessed with it.

It’s the story of a failing musician who assumes the identity of a friend he has been sponging off for years and poses as a teacher at a prestigious prep school, turning his musically-gifted pupils into a rock band to try to win the Battle of the Bands and get one up on the band who kicked him out. Cardiff Daddy and I loved the Jack Black film when we saw it in the cinema way back in 2003 and 17 years on the story is still just as captivating.

I knew that we’d all love the stage musical, currently wowing audiences in the West End following huge success on Broadway. And so, on Cardiff Daddy’s 40th birthday, I surprised them all by saying we were off to London to see the show – my children’s first West End experience.

Regular readers will know Cardiff Daddy’s birthday was back in March when we got snowed in! It was a long wait for us from then until the end of July when we finally got to see it . But it was totally worth it as School of Rock is so uplifting and inspiring with brilliant performances all round, not least from the talented youngsters who play the school children. It’s one of our favourite musicals we have seen as a family; we all know every word of the soundtrack and couldn’t wait to see it live, but it exceeded our expectations and completely blew us away. 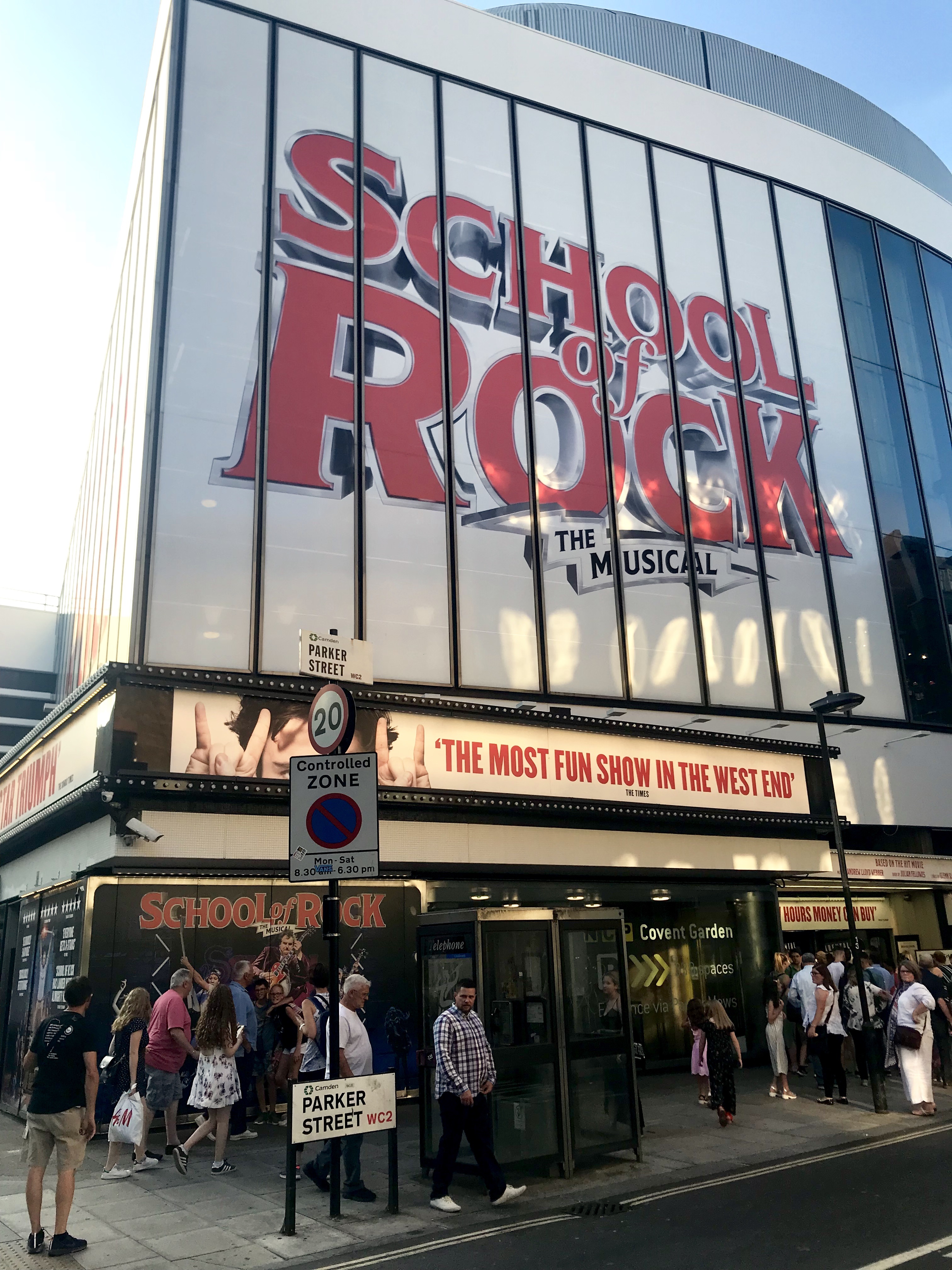 Before the show starts an announcement from Lord Andrew Lloyd Webber himself – composer of the musical – tells us that the children play their own instruments… and they are incredible. We got talking to one of the performer’s mums at stage door at the end of the show. Her child is 11 and has just finished year six. I honestly thought the children would be older than the 10 year olds they were supposed to be playing, but the three rotating casts of young people are aged between 10 and 13, which just makes their achievements even more remarkable.

My middle child loves rock guitars and my eldest has recently started flute and piano lessons in school and seeing the young children playing their instruments has really inspired them. 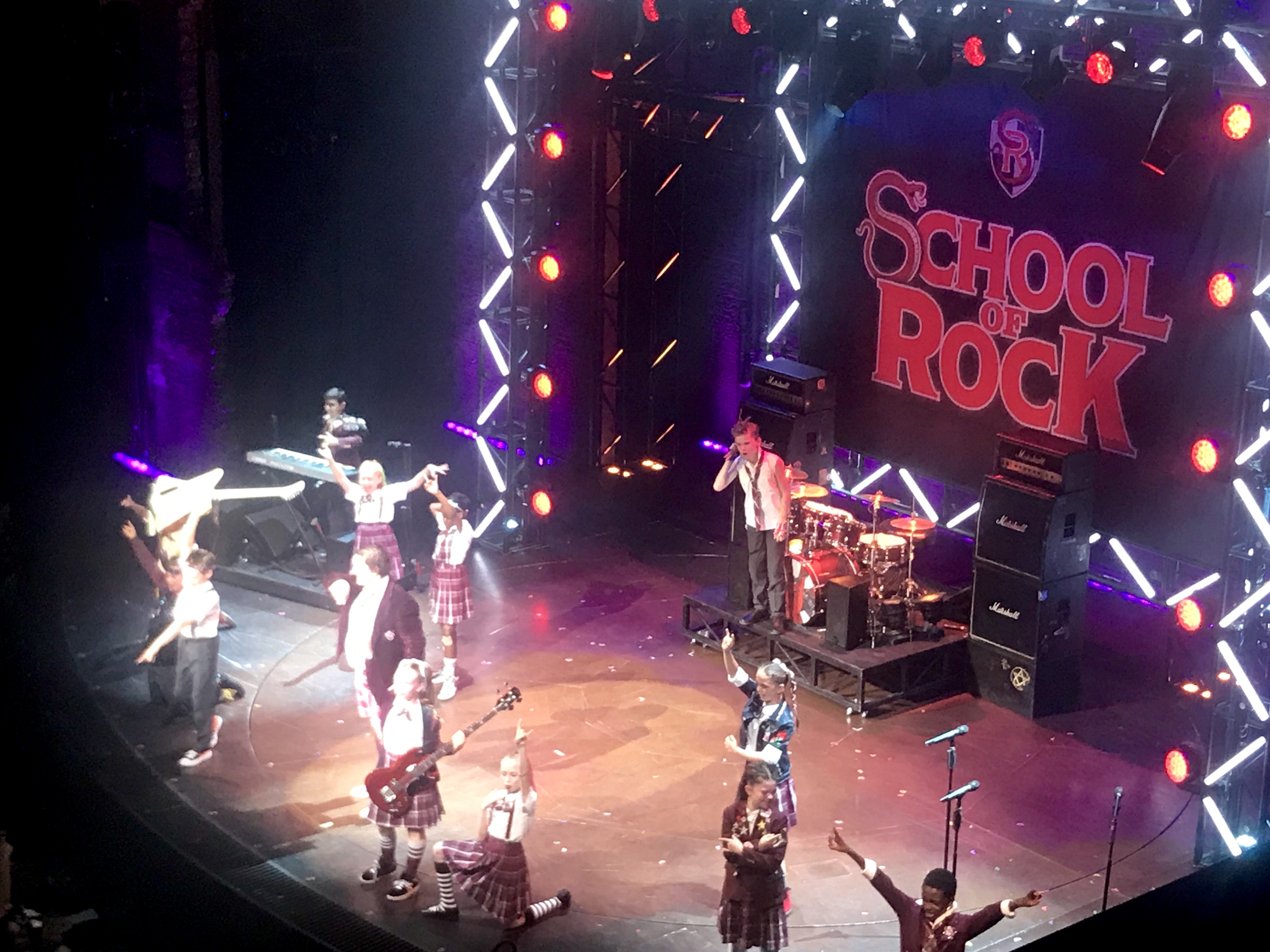 Stephen Leask as our hero Dewey Finn is so charismatic and likeable. He’s very like Jack Black in the film and a great figurehead for the show. He’s in so many of the scenes, singing and playing the guitar, and directing the children as they form their band. It must be a demanding part to play. He had so much energy and enthusiasm throughout and despite all his actions being completely in the wrong – pretending to be his teacher friend Ned Schneebly and taking a job he isn’t qualified for; telling his class they are on permanent recess because he is too hungover to teach them; completely ignoring the curriculum to teach rock music when he discovers they have talent; busting the kids out of school to compete in the battle of the bands – you can’t help but root for him and hope he succeeds. By the end of the show, it’s clear the children have taught him as much as he’s taught them.

Rosanna Hyland is perfectly cast as the school’s principal Ms Mullins. Formal and straightlaced to begin with, we soon see a softer side to her as Dewey helps her re-discover her rock chick past. Vocally, she’s just as at ease with the high-pitched operatic warbling of the Queen of the Night’s Aria from Mozart’s The Magic Flute as she is accompanying Stevie Nicks’s The Edge of Seventeen on the jukebox. Her wistful solo Where Did The Rock Go? will resonate with anyone who has ever looked around at their serious and responsible grown up life and wondered what on earth happened to their spontaneous crazy, younger self.

Alan Pearson plays Dewey’s long-suffering friend (the real Ned Schneebly) and Michelle Francis is his wife Patti. There’s also a strong cast of parents and teachers, all of them not happy with the new teacher’s methods. 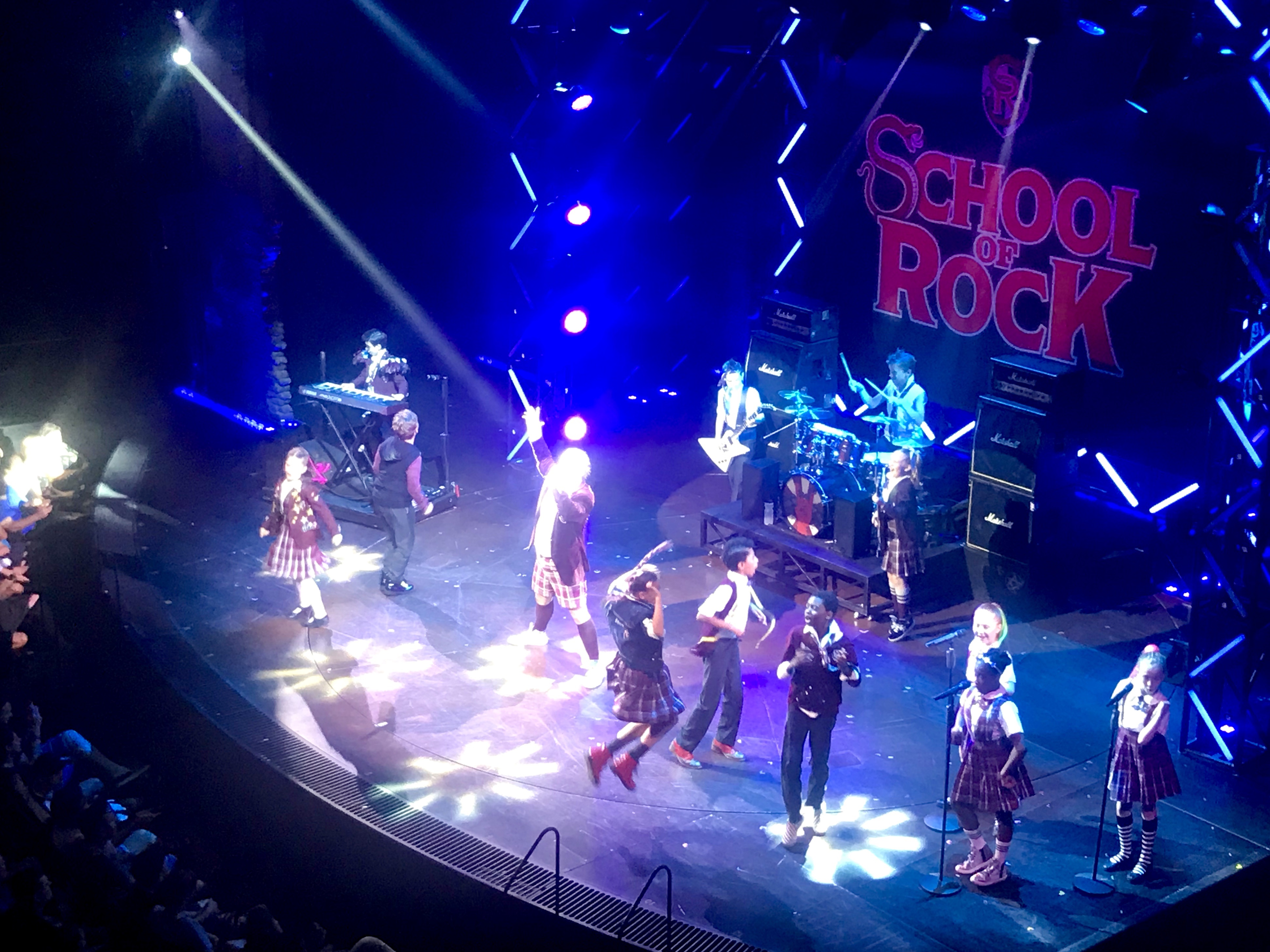 But the show truly belongs to the children. As I mentioned above, they are young and incredibly talented and completely blew us away. All of them. Although particular mention must go to Tahlia Colbourne as Tomika who is new at the school and barely says a word before suddenly blowing us away with powerhouse vocals; Aaliyah Monk as the precocious but ultra-organised band manager Summer; and Santiago Cerchione as guitar-playing Zack Mooneyham.

The show is bursting with anthemic rock numbers. You’re In The Band, in which Finn gets the young classical musicians to loosen up and try out some rock riffs and rhythms is incredibly catchy, as is Stick It To The Man, a lyrically-brilliant two-fingered salute to the establishment. In this case, parents and the teachers. You can watch an earlier UK cast performing it here but be warned there are a few swear words.

If Only You Would Listen is a particularly poignant, as the various children try to tell their parents that their true passions and interests are not the ones their parents are pressuring them to have.

The title song School of Rock is an uplifting and empowering number, supposedly written in the show by Zack (although in reality it’s down to Glenn Slater’s lyrics and Lloyd Webber’s music).

We’ve spent the last seven months listening to the soundtrack and although it’s an excellent show even if you have no prior knowledge being familiar with the songs really added to our enjoyment of the experience and I loved seeing my children singing along.

As you’ll notice from the above video there are a few swear words throughout the performance, which is naturally something for parents to take into consideration before booking. Having listened to the soundtrack and watched YouTube videos from the show Cardiff Daddy and I were happy to take our children along. Most of these words go completely over my four-year-old’s head, while our six and eight year olds are starting to hear this kind of language in the playground anyway. Seeing a show like this gives us a context to explain such words and to talk to them about using them in context.

Ticket prices ranged from £15 to £150 – and with five of us to buy tickets for, not to mention paying for our three-night break in London including accommodation, food and day trips – we opted for the cheapest seats. I was worried as to whether this would turn out to be a mistake and although obviously our seats were not as good as those in the front row, we had no problems at all. The theatre is a good size, not too big, meaning nowhere was too far away from the stage. We were sat on the side, on the second of two rows. The first row wouldn’t be great for small people because there’s a wire barrier that could masque the view, but our row was fine and we could see everything clearly. 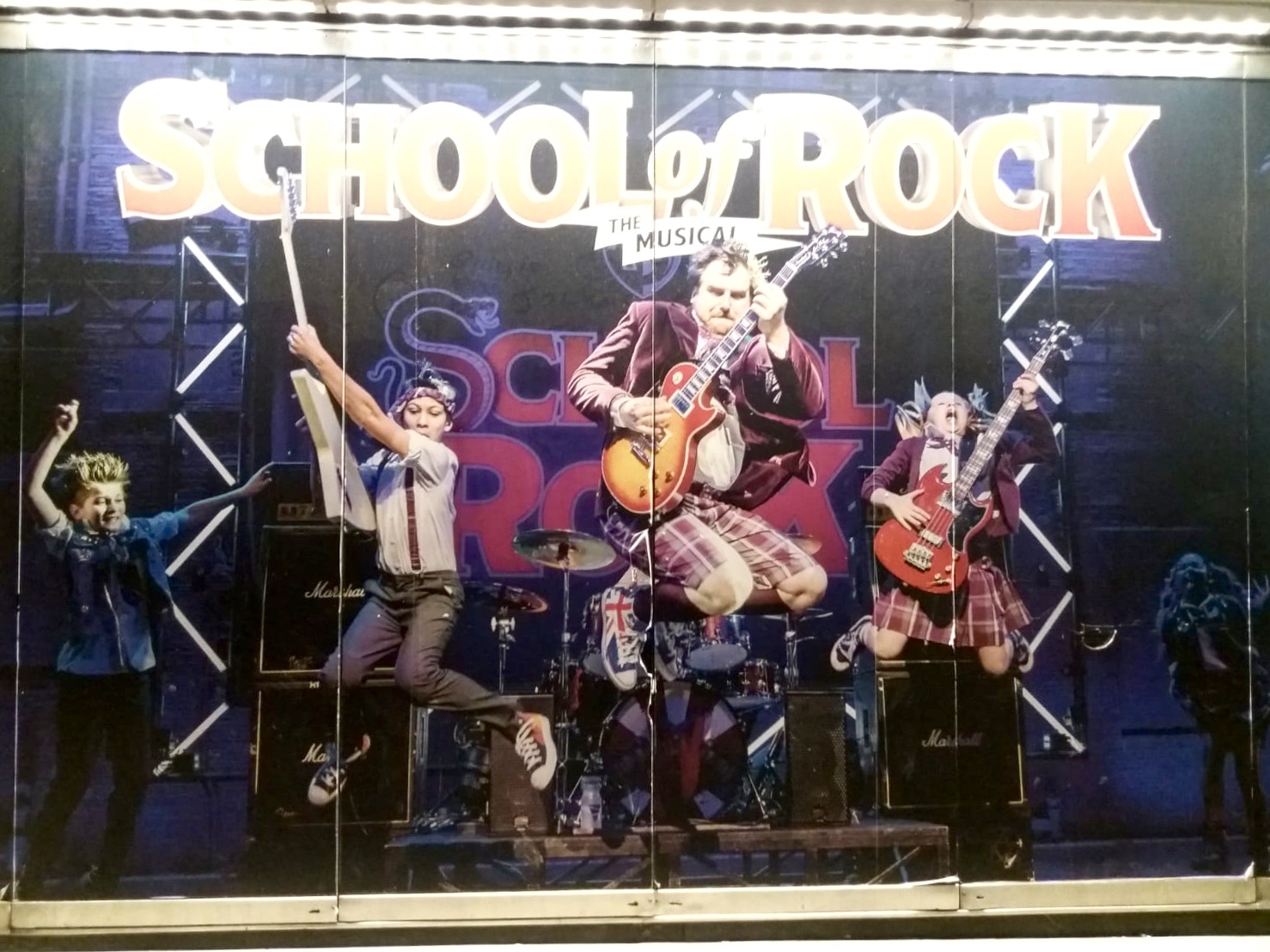 As much as I love the huge touring shows that come to Cardiff, there’s something very special about seeing a show in the West End. As the shows are there for several months and often years, the whole theatre is taken over by production. The show’s name in big letters, the huge poster of the cast outside which we stood on front of and had our photo taken, even the ice creams with School of Rock labels, all add to the theatrical experience.

We absolutely loved every moment and only wish we could see it again. I sincerely hope Lloyd Webber decides to put this one on the road and brings it to Cardiff in the near future. We would book to see it again, for sure.

Its run has been extended and is now booking until 20 October 2019. Tickets cost from £15-£150. For more information or to book, see the website.

Homepage » children's theatre » As School of Rock The Musical gets set to come to Cardiff, here’s what we thought when we saw it in London’s West End