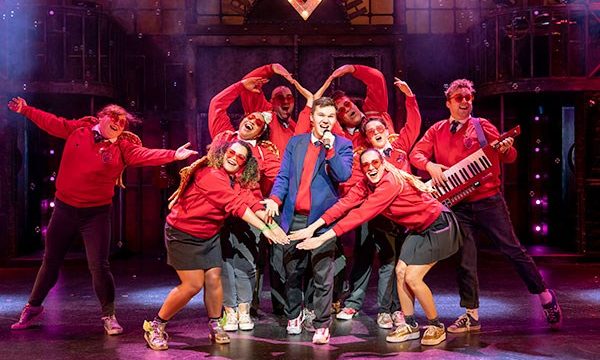 Thanks to the New Theatre, Cardiff for inviting us to see the show in exchange for this review

“Fair play, that was absolutely brilliant,” were my husband’s words as we left Cardiff’s New Theatre last night after watching Billionaire Boy The Musical. And he’s right. The musical stage adaptation of David Walliams’ best-selling children’s novel is not without its flaws but it is indeed brilliant.

Nuffield Southampton Theatre have created an uplifting and inspiring family theatre show which entertained me and Cardiff Daddy as much as it did our three children, aged nine, seven and almost five. Packed full of original pop and rock songs and with plenty of laugh-out-loud moments – many of them verging on the mildly grotesque as readers of Walliams’ books have come to expect – it’s an entertaining show with important life lessons intertwined throughout. 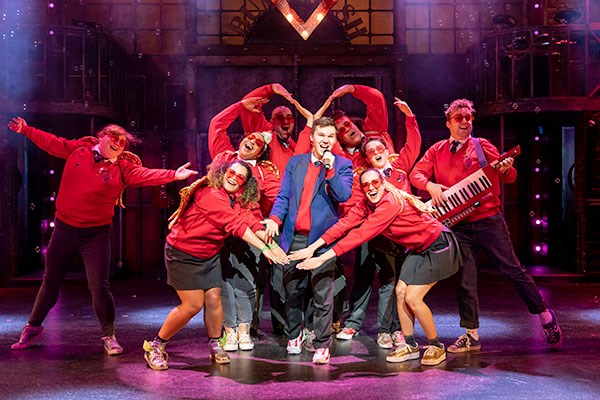 Billionaire Boy The Musical tells the story of Joe Spud who, as the show’s name would suggest, is a rather wealthy child thanks to his father making his fortune by revolutionising the toilet paper industry. However, we soon learn that while money might buy a lot of things, it can’t buy happiness. Joe is bullied at his prestigious private school and neglected by his father, who is obsessed with spending his money and impressing his new-found friends and girlfriend who are clearly only there for the money. Joe thinks transferring to the local comprehensive where he can reinvent himself as an ordinary boy will be the answer. But even there he finds himself in constant trouble with one of the teachers, unwittingly upsets his one and only friend Bob, discovers the girl he has fallen in love with isn’t what she seems, and it’s not long before he’s recognised as being the heir to the Bum Fresh empire and everyone’s behavior towards him changes.

I won’t give any more of the plot away here other than to say it’s pretty faithful to the book and as with all of David Walliams’ works there are plenty of life lessons amid the laughter, as friendships and family relationships are put to the test and various characters are reminded of what is truly important.

Aside from Walliams’ original story, what makes this such an enjoyable show is the fun (although not very memorable) catchy electro pop and power ballads throughout and the brilliant performances from the cast, many of whom play more than one character and must have some incredibly quick costume changes. 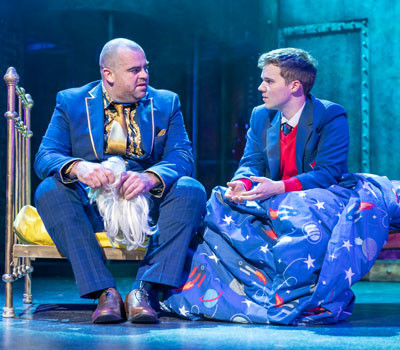 Ryan Heenan is a very affable and down to earth Joe; while Dean Nolan, who plays his father Len with much energy, is equally great as the menacing school dinner lady Mrs Trafe. I really liked Avita Jay as both Sapphire Stone, Len’s money-grabbing girlfriend, and Raj, the cornershop owner who appears in several Walliams books and who helps Joe figure life out over a bar of chocolate – although I found the moments where as Rak she was talking to the audience acknowledging they were watching a show a little too laboured.

But it is Lem Knight’s Bob – the overweight, bullied schoolboy who has already sussed out what’s important in life – and the wonderfully warm Sophia Nomvete as his mum who really stood out to me, bringing a lovely emotional heart to the story.

Nuffield Southampton Theatre are also the team behind the rock musical version of Roald Dahl’s Fantastic Mr Fox, which we saw at the New Theatre this time two years ago. And just like that production, with Billionaire Boy The Musical they have created a feel good show that while not perfect makes for great cross-generational entertainment. 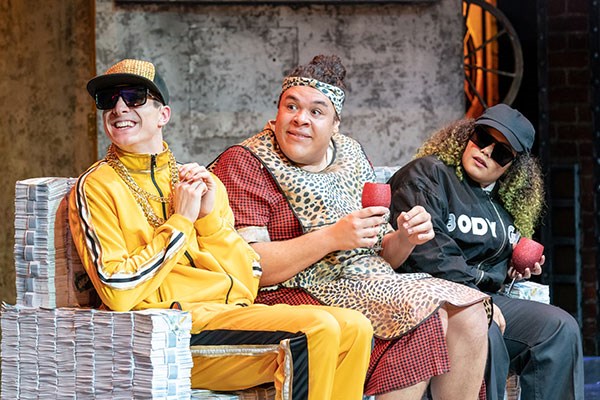 Billionaire Boy The Musical is at The New Theatre Cardiff until Saturday 2 March. Book online here. The show is two hours, including an interval.

Have you seen Billionaire Boy The Musical? I’d love to know what you thought in the comments below, on the Cardiff Mummy Says Facebook page or you can tweet me on @cardiffmummy